“K,” was the text I sent back to him shortly before the game started.

I knew the Giants were going to win Super Bowl XLVI. Bruce Weber spoke about the sprinkling of fairy dust that had settled over the team this year in his article on Friday in the New York Times. He was right. But I knew that this was going to be a winning year, because the Giants and the Super Bowl have been in my family’s history for so many defining moments: 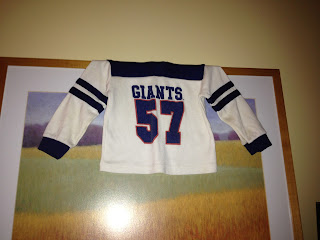 * The winning season was 1986 and my daughter A was born.  I went and bought a Giants jersey for A to wear to the Super Bowl that January.

* The winning season was 1990 and my son D was born.  He wore the Giants jersey that A had worn four years prior.

* The winning season was 2007 and the Giants played again in the Super Bowl in January 2008.  This time they won as a memorial for my husband M, one of their biggest fans, who passed away shortly before the season ended. Two thousand eight was also the year that my daughter A graduated from college and my son D graduated from high school.

Now as my son edges closer to his May 2012 graduation date, the Giants have brought our family another Super Bowl championship. Four for four.

“I’ll see you on Tuesday,” was the text message I sent to A and D shortly after the Giants won.
“Ha ha, you’re crazy, but I love ya,” was the text my son D sent back.
I think it is about time I framed that 18 month size Giants jersey and put it above my mantle where it belongs.  Yes, that’s what I am going to do…that is after I get back from the ticker tape parade on Tuesday.