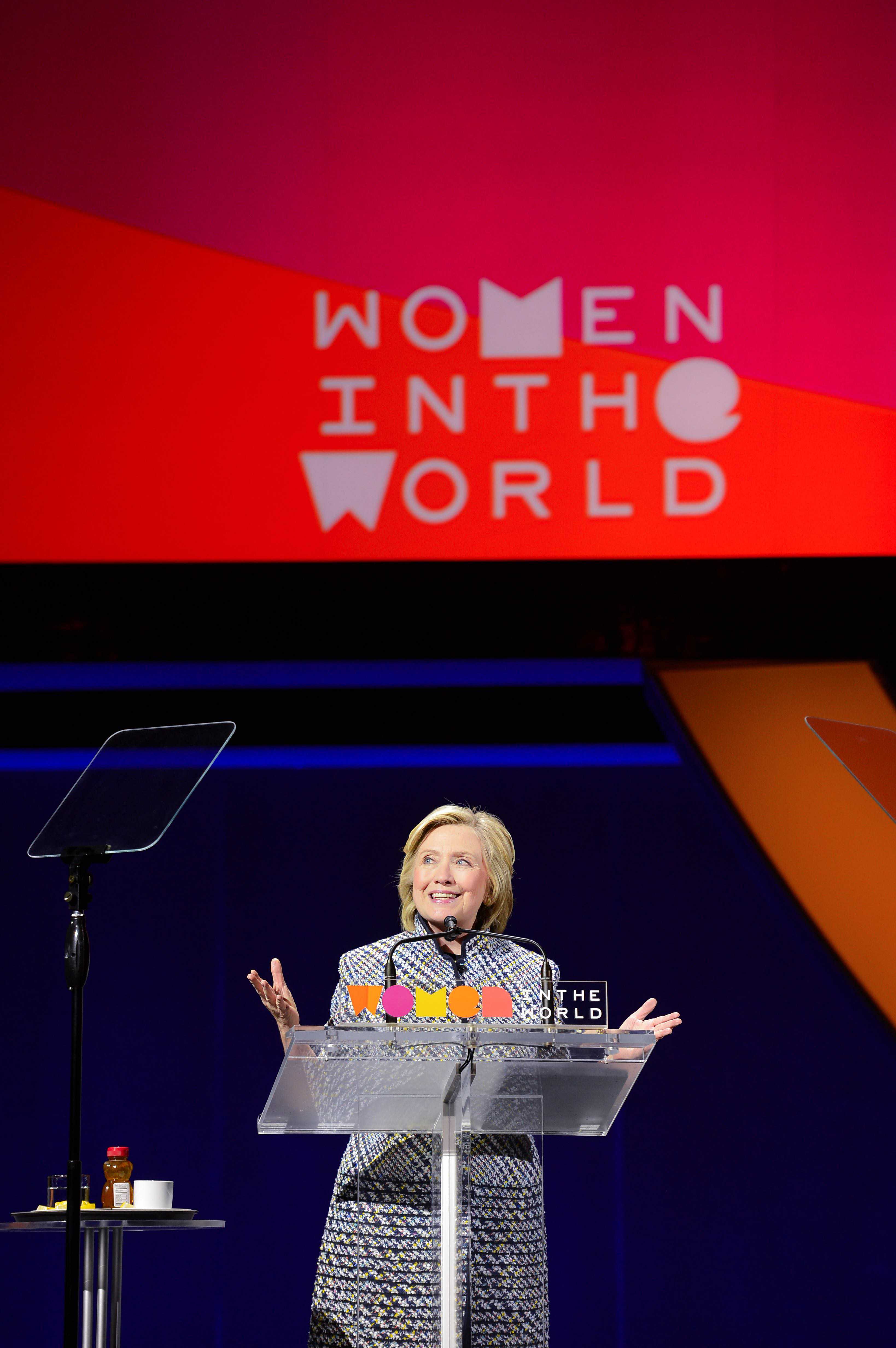 Last Thursday, I attended the sixth annual “Women in the World Summit” at Lincoln Center in New York City. It was an emotional and eye-opening day as I learned about issues facing women and girls around the world.

“Together, we’re going to parachute behind the frontline of the news. We’ll experience dramatic stories through the eyes of some extraordinary women and the men who champion them. Our guides are activists, artists, entrepreneurs, fighters, journalists, peacemakers, and rabble-rousers.,” said Tina Brown, Founder and CEO, Women in the World/Tina Brown Live Media.

A Galvanizing Agenda
Each discussion was more stirring than the next, with subject matters ranging from gender inequities and women’s health to sexual violence and mutilation, to the importance of human rights and education for women and girls. The growing impact of climate change, caregiving, cyber-bullying, maternal mortality was also on the agenda. You can watch many of the presentations at the “Women In the World” website (co-produced with The New York Times) or by clicking on the links throughout the post.

You can watch many of the presentations at the “Women In the World” website. #WITW

For now, here are some of my takeaways from the day:

♥ Cofounder of Bring Back Our Girls, Obiageli Ezekwesili, talked about the 276 Nigerian school girls who were kidnapped last year by Boko Haram terrorists. “Everyone must use your influence to bring back our girls, these girls are not back yet,” said Obiageli. “Nobody has the right to make you have to decide between education and being alive.” (Hearing this story made me really appreciate the educational opportunities we have in America.) 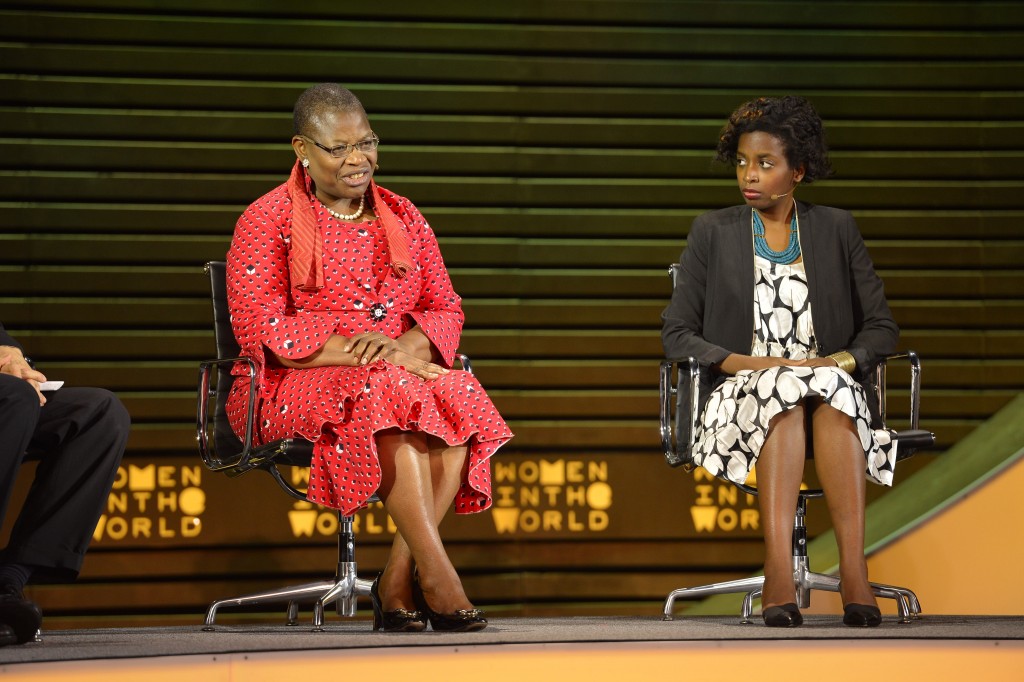 Obiageli Ezekwesili (left) is Cofounder of Bring Back Our Girls, seated with panelist Alexis Okeowo, Writer, The New York Times Magazine and The New Yorker.

♥ Valerie Jarrett, Senior Advisor to President Obama and Chair of the White House Council on Women and Girls, moderated a panel on caregiving. “Forty percent of working moms are single. In 2000, 30 million people were over 65. By 2030, that number will double. Sixty-two percent of caregivers are women,” said Valerie. Panelist Sheila Lirio Marcelo, Founder, Chairwoman, and CEO, Care.com, echoed these concerns. “Caregiving is the #1 budgetary item for working families. Investing in care drives economic growth. We have a crisis coming if we don’t take care of caregiving.” (Having been a part of the AARP Kitchen Cabinet of Caregivers, I am very passionate about this issue. Valerie asked for help: “What more should we be doing to spotlight caregiving? Send suggestions to me on Twitter at @vj44.”)

♥ Sister Rosemary Nyirumbe, Director, St. Monica’s Girls Tailoring Centre, Uganda, spoke about her efforts to save thousands of young women who survived years of captivity under Ugandan rebels. Many children were abducted and sold into sex slavery. She teaches these girls sewing skills and how to love their own babies, many born out of rape. “These girls are using machines to sew their own lives,” said Sister Rosemary. 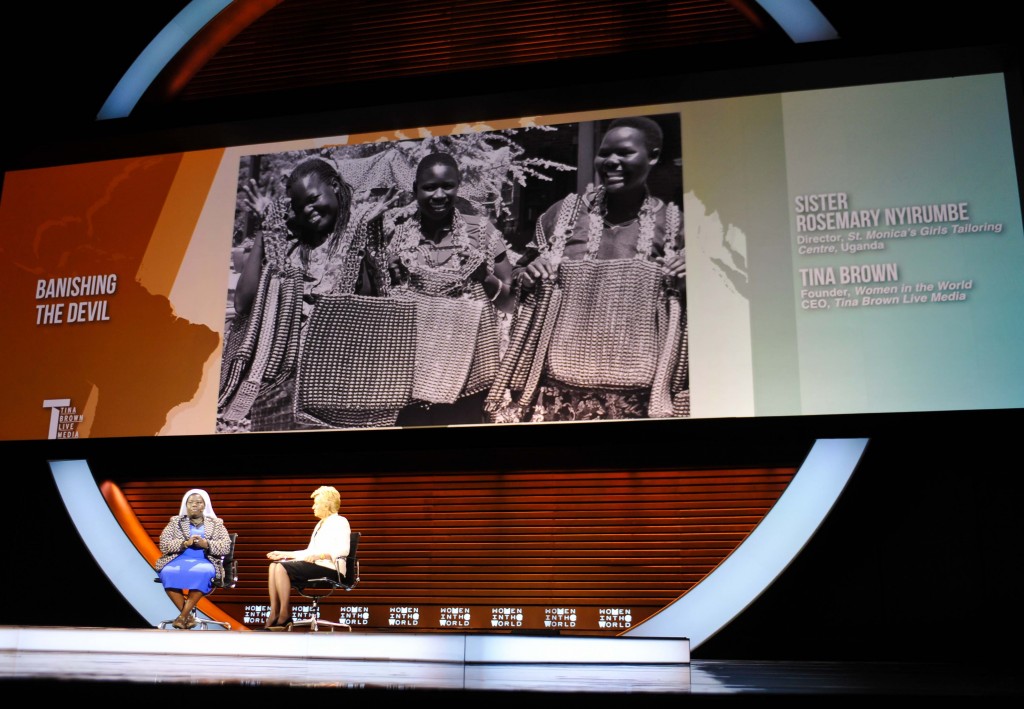 ♥ Mary Robinson, 7th President of Ireland and President and Founder, Mary Robinson Foundation – Climate Justice, rallied around reducing our carbon footprint globally. “In 25 years from now there could be 200 million climate displaced people. You need to prepare people for change,” said Mary. “In 2015, the world will make sustainable goals for each country. What is one thing you can do to support a more sustainable world? Do it for your children,” asked Mary. (This issue is very real. Panelist Patricia Cochran, Executive Director, Alaska Native Science Commission, told us that coastal communities in Alaska are already experiencing erosion of communities.)

♥ Ting Shih, CEO and Founder, ClickMedix, shared a glimpse of the future of mobile healthcare. She and her team at MIT developed an app that is now being used in India to screen patients using a smartphone. (It was amazing and very impressive.)

♥ Leslee Udwin, Director/Producer, India’s Daughter; CEO, Assassin Films, provided shocking news about the gang rape and death of Jyoti, a young Indian women and medical student. “All Joyti wanted to do was go to see a movie. She went out after dark. Women are not allowed out after dark. Men don’t think they have done anything wrong. One woman is raped in India every five minutes,” said Leslee, as she described the politics of shame and stigma in India and the worldwide fight against sexual violence and gender inequality. (Sadly there were quite a few stories about slave trading of young girls in other parts of India, Africa, Iraq, and North Korea. It was hard to fathom such atrocities. On a positive note, I was uplifted to hear from courageous female leaders who are striving to improve human rights for all.)

♥ Barbra Streisand participated in a panel on heart disease, which is the #1 killer of women. Barbara is a philanthropist in improving heart care and research specific to women, including the Cedars-Sinai Barbra Streisand Women’s Heart Center in California. “It’s still an old boys’ club. The mice that they do research on are male mice. There’s a stigma attached to heart disease. The heart is hidden. It is the center of the soul. It’s thought of as an aging disease. We have a lot to overcome,” said Barbra. (This is another issue I am equally passionate about. Barbra encouraged women to be proactive about their heart. Get checkups for cholesterol, blood pressure and sugar, and understand signs of a heart attack which are different for women.) 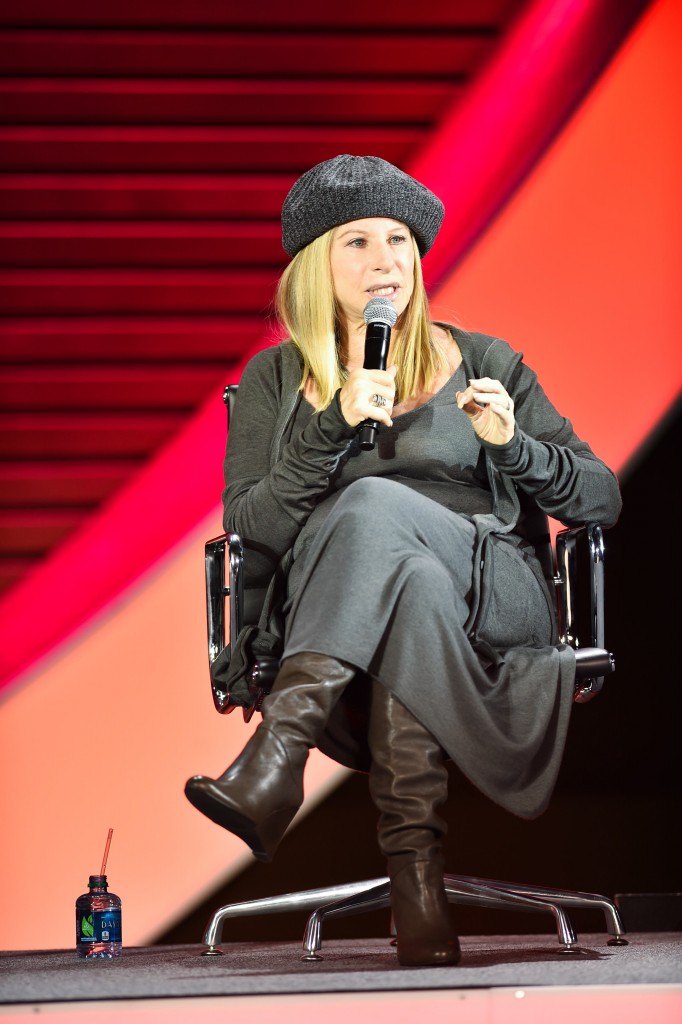 Barbra Streisand spoke about her philanthropic efforts to improve the inequity in heart disease research. Heart disease is the #1 killer of women.

♥ Other powerful speakers included: Ashley Judd, Actress, Activist, and Humanitarian, with her fight against cyber-exploitation and online bullying. Doniece Sandoval, Founder, Lava Mae, who brings showers to homeless people via a “shower bus” she created. Yeonmi Park, Drector, North Korean Human Rights Activist, a young woman who walked across the Gobi desert to defect from North Korea. “For the first time in my life I own myself,” said Yeonmi.

♥ Hillary Clinton closed out the day. “Human rights are women’s rights. Women’s rights are human rights. Rights have to exist. Access for women is unfinished business of the 21st century,” said Hillary. “By coming to this extraordinary gathering you now must be an agent of change. It’s about making sure every child has the chance to achieve their dreams.” 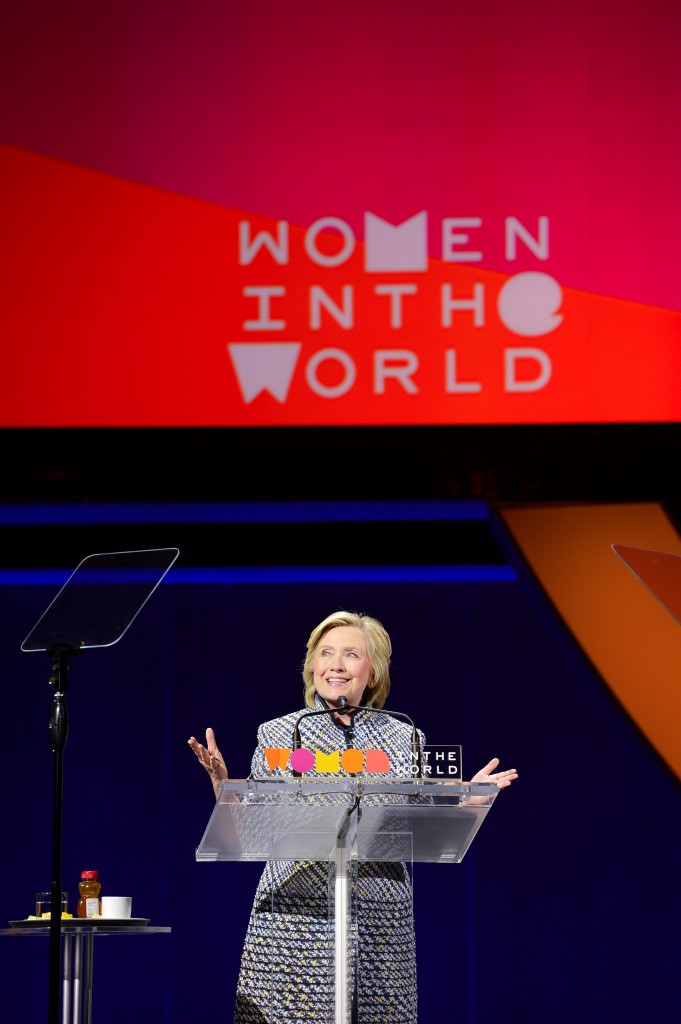 Hillary Clinton closed out the day by saying, “By coming to this extraordinary gathering, you now must be an agent of change.”

A Global Sisterhood
Can you see why I was moved by the Women In The World Summit?  Sometimes I wanted to scream and other times I wanted to cry (I did shed quite a few tears) as I listened to the stories. I left feeling a certain “sisterhood” like Tina remarked, a “sisterhood” of wanting to help these women and girls in some way.

“They remind us of a world beyond our own lives,” Tina said. “What are you going to do about these stories when you go home? Keep these women in your heart,” said Tina.

Sharing this blog post with you is my small way of helping to generate greater awareness of these life and death issues facing women and girls. I encourage you to share this post with others, the more who know about these struggles, the more we can create change. Boomer women make up a majority of the population of women — we can make a difference.

How Can You Get Involved
Women in the World Summit has partnered with Catchafire, an organization that connects talented professionals who want to volunteer their skills with social enterprises that need  help. Visit witw.catchafire.org to learn more.

Shop To Help Sisters Around The World
If you would like to shop for a cause, there are multiple vendors providing handcrafts by women from around the world including Bajalia, Catrinka, Center For Traditional Textiles of Cusco, Feed, Global Goods Partners, Kandahar Treasures, Same Sky, Sisters United For Africa, To The Market, Walmart/Empowering Women Together. Perhaps purchase something for a Mother’s Day gift.

Bracelet Giveaway
I bought Isabella Lagarte bracelets produced by Peruvian women from the Walmart/Empowering Women Together collection. To enter the giveaway to win these bracelets, leave a comment and enter the Rafflecopter below.

Thanks for listening and please help create change.