Visiting Aalborg: An Authentic Look Back at the Life of a Viking 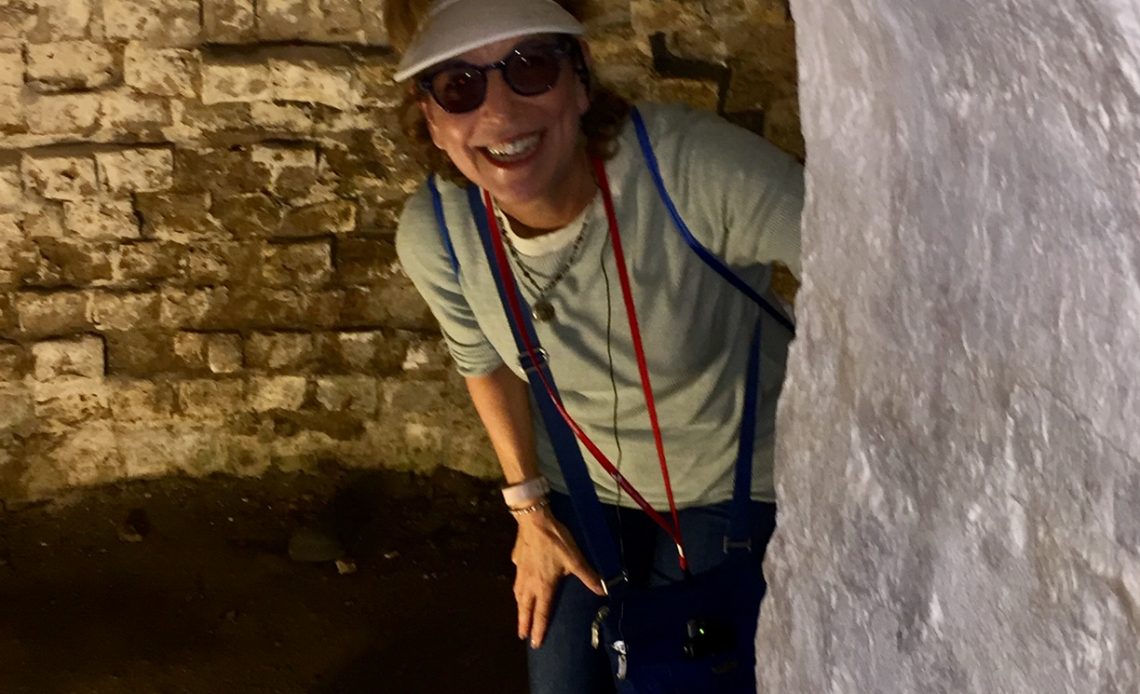 It was early morning and we had just arrived in our second port in Denmark as part of the Viking Homelands cruise, compliments of Viking Ocean Cruises.* Having enjoyed my visit to Copenhagen the day before, I was excited about visiting Aalborg, a city founded by the Vikings and rich in medieval history. We only had a few hours to explore before setting sail for Norway, so I was eager to get going, as was my sister N, my lucky traveling companion for this journey.

“Welcome to Aalborg, I’ve been looking forward to showing you pieces of our town,” said our guide Ulla. As we walked to Royal Customs Square to start our tour, she shared more about Aalborg’s beginnings. “The Vikings settled here on the hill. It was practical because they could see the entire fjord and see if enemies were attacking. However, it was impossible to live up in the hills, so they settled in Aalborg, since it was near the water.” 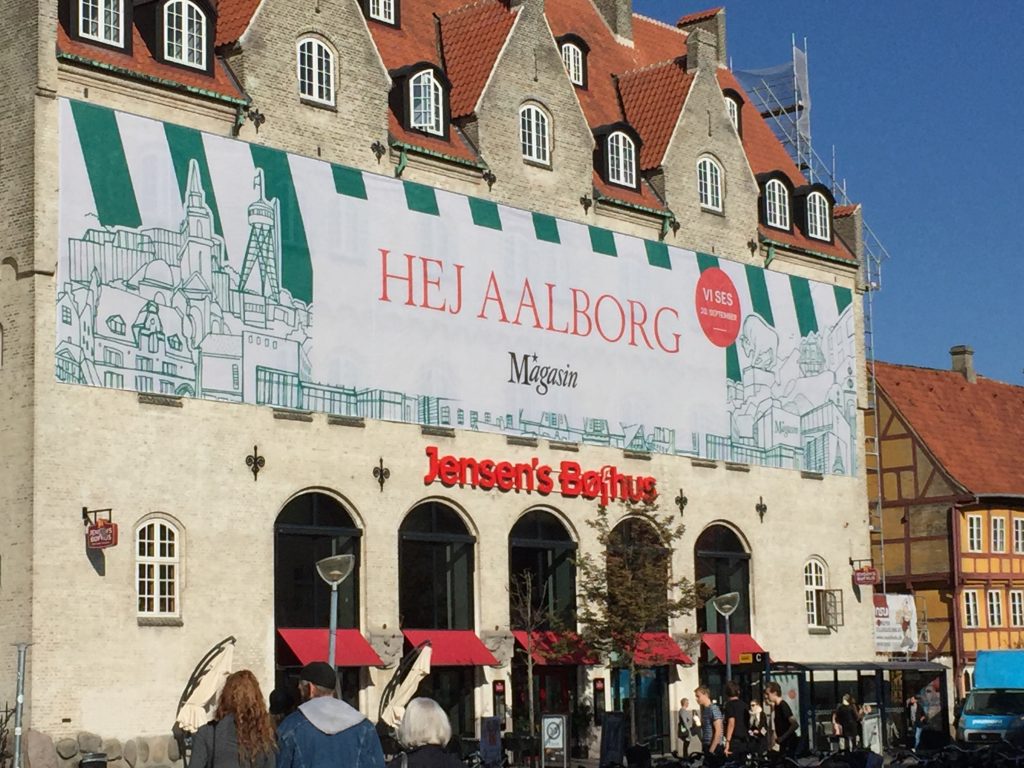 Aalborg was our second stop in Denmark

A City Founded by the Vikings

“Almost 700 graves of Vikings are buried here. When archeologists dug them up they found spices from The Indies,” said Ulla. (A popular tourist attraction is the original burial site at Lindholm Høje in the Lindholm Høje Museum. Will have to add it to the list for next time.) 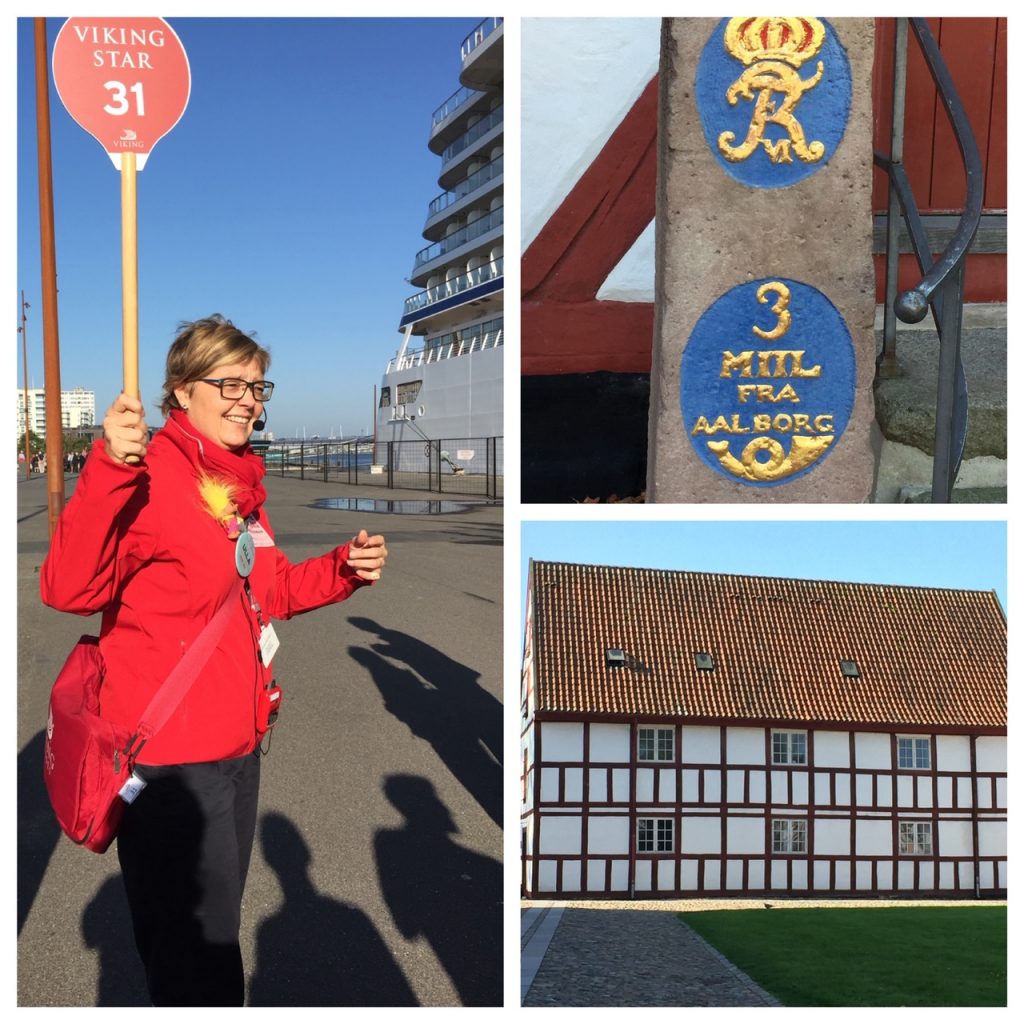 Our guide Ulla introduced us to Aalborg Castle where the king lived back in the 1500s.

Entering the Square was like stepping back in time. We walked first to the castle, built in the 1500s. “In medieval times there was no fresh water supply so the king had to tax the community. The people paid with crops and other items,” said Ulla. The king also collected taxes from the boats right when they landed at the harbor, before they brought any goods into town.

We walked through the castle tunnels, where meats were once kept cool for storage. Ooh, ooh, ooh, we also went into a dungeon where the females who practiced witchcraft were kept. The doors were very low, making it harder to escape. “The main witch was held captive in the dungeon for nine years. There was very little fresh air and sometimes 80 people were crammed in a dungeon,” said Ulla. 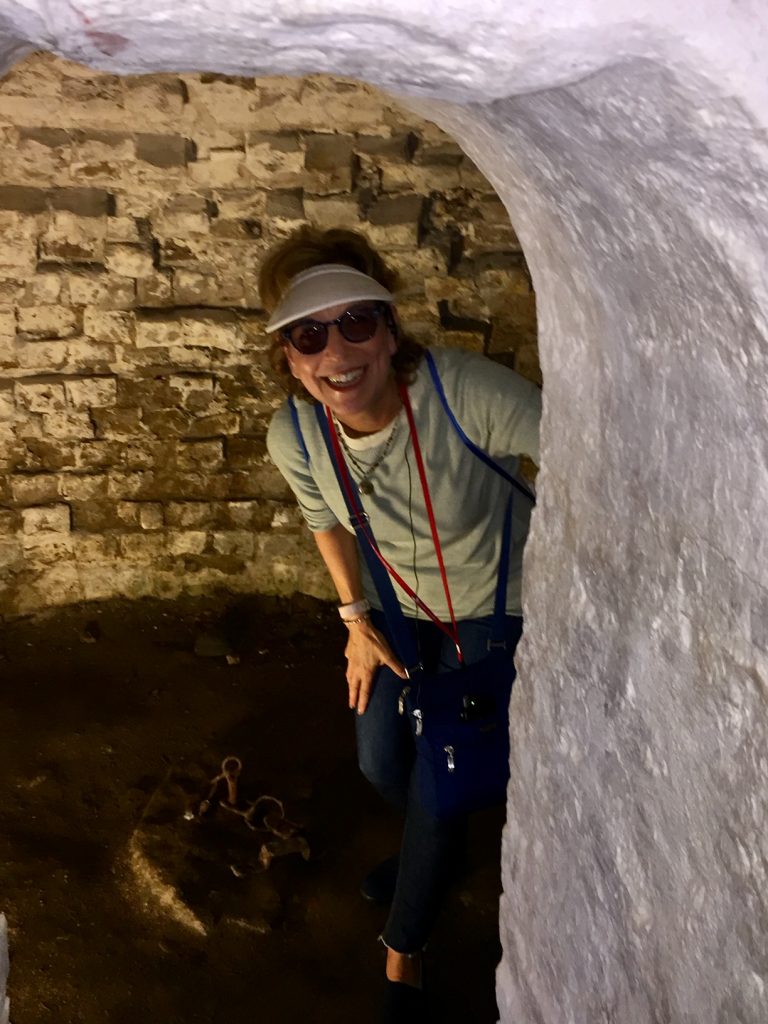 I had to duck to get into the dungeon.

The Village of the Vikings

Behind the castle was the village of the Vikings. “Come closer if you can’t smell me then you’re not close enough,” greeted one of the Vikings. Dressed in Viking attire, he held out a brew of mead, an alcoholic beverage made with honey, yeast and water. “You’re sailing the sea. Nord is the god of the sea,” he said. “We drink to celebrate our gods. And there are so many of them.” 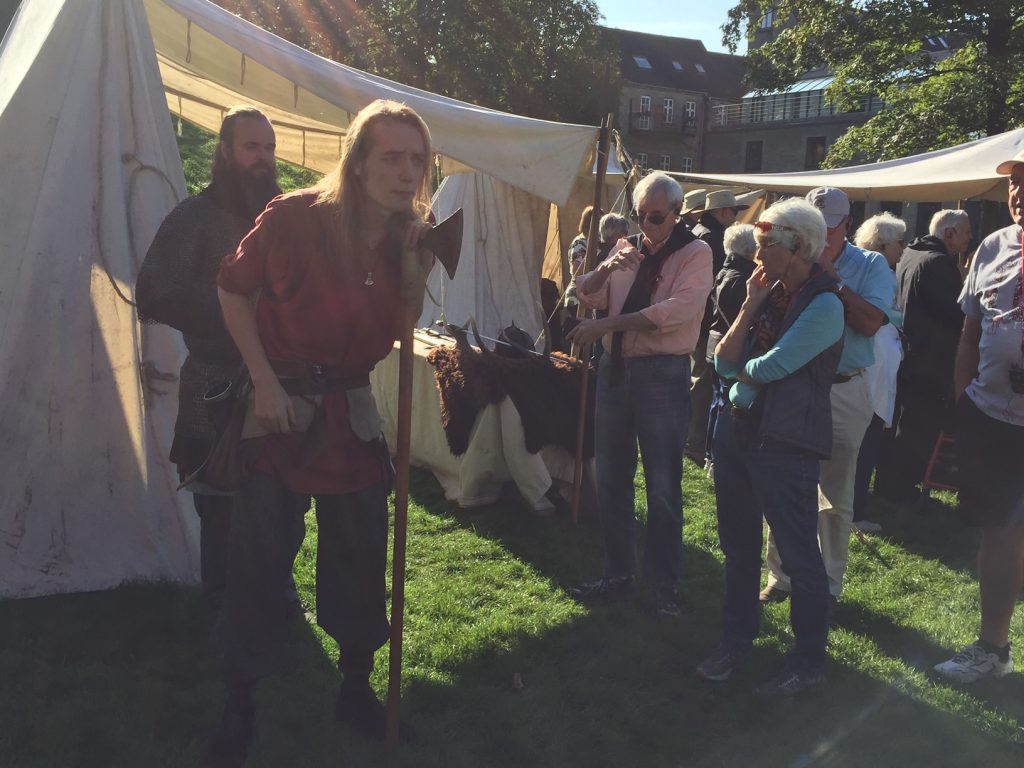 Those dressed as Vikings demonstrated their weapons.

“Hail Nord! That’s what we say before we drink,” he added. “Then we smile and shake the drops out of the glass.

He held up his sword. “During the days of the Vikings, a sword cost as much as a farm. Vikings who had swords were quite rich,” he said. 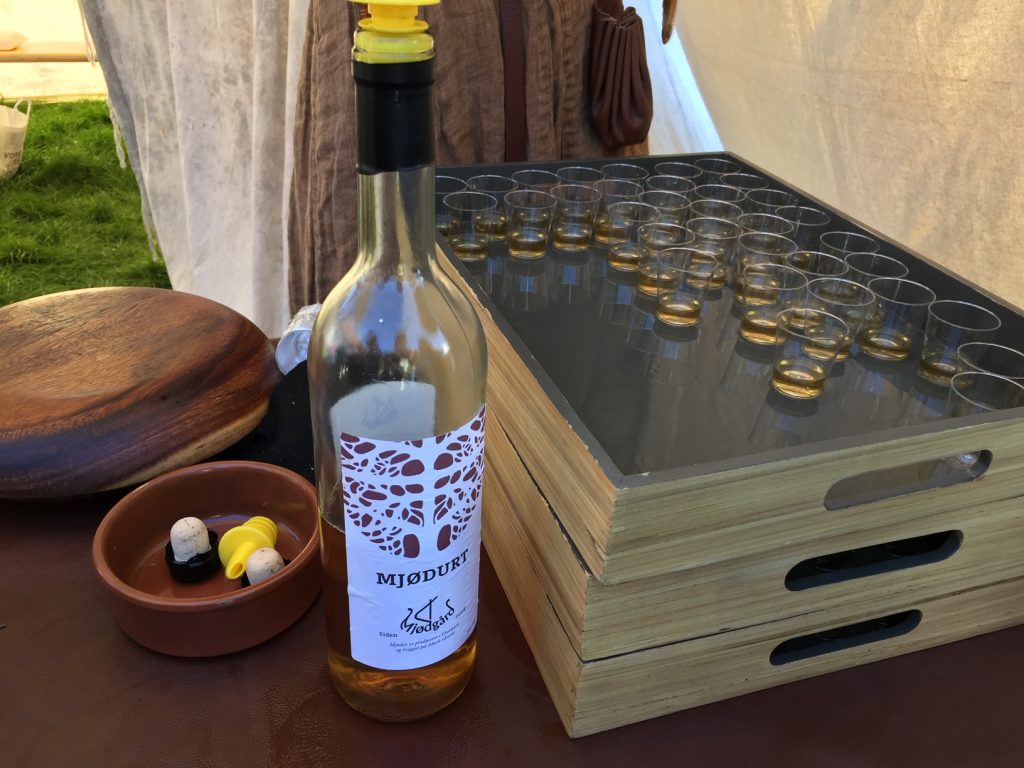 Vikings shared shots of mead beverage with us.

To Market, To Market

After leaving the Vikings to their duels, we walked into the city center. We saw new market square, which in medieval times was where merchants brought their foods and spices to be sold. This was also where public notices were posted. Ulla mentioned that the square was full of people during the World Cup Soccer semifinals when Denmark played France this year. 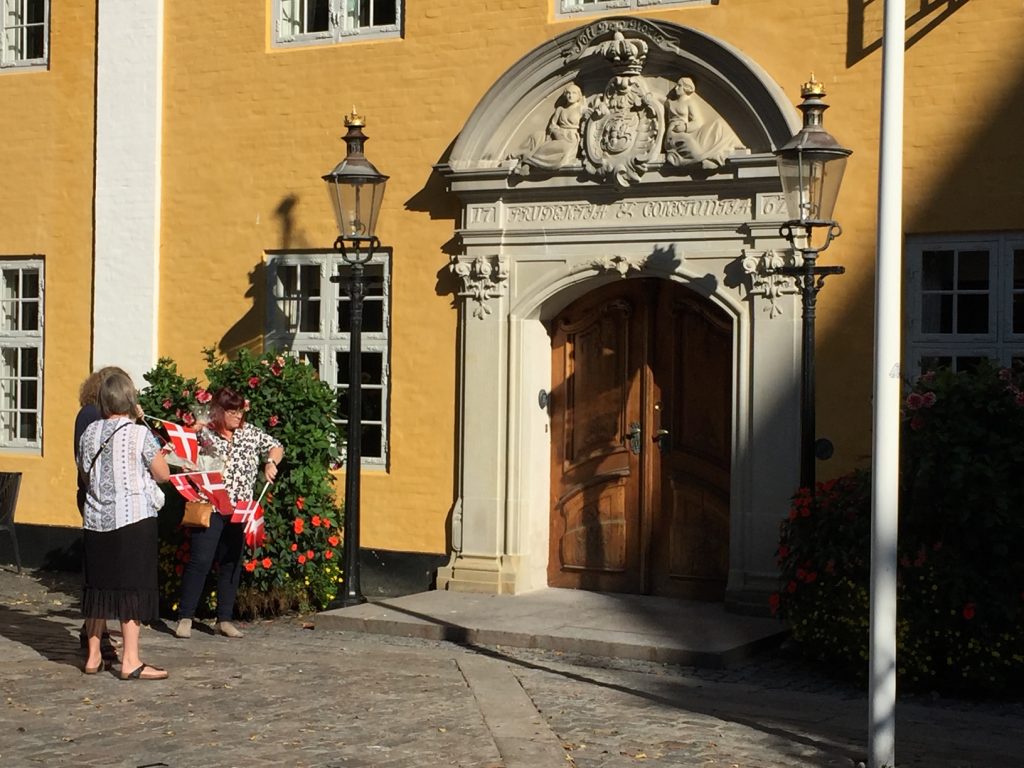 Aalborg residents can get married in the town hall.

Walking toward the old market square, we passed Budolfi Church and heard its beautiful carillon (tuned bells) which plays every hour from early morning to evening. Ulla noted that winters in Denmark are usually dark and cold, however the Danes enjoy ice skating at the rink which is usually set up in the center of the square. 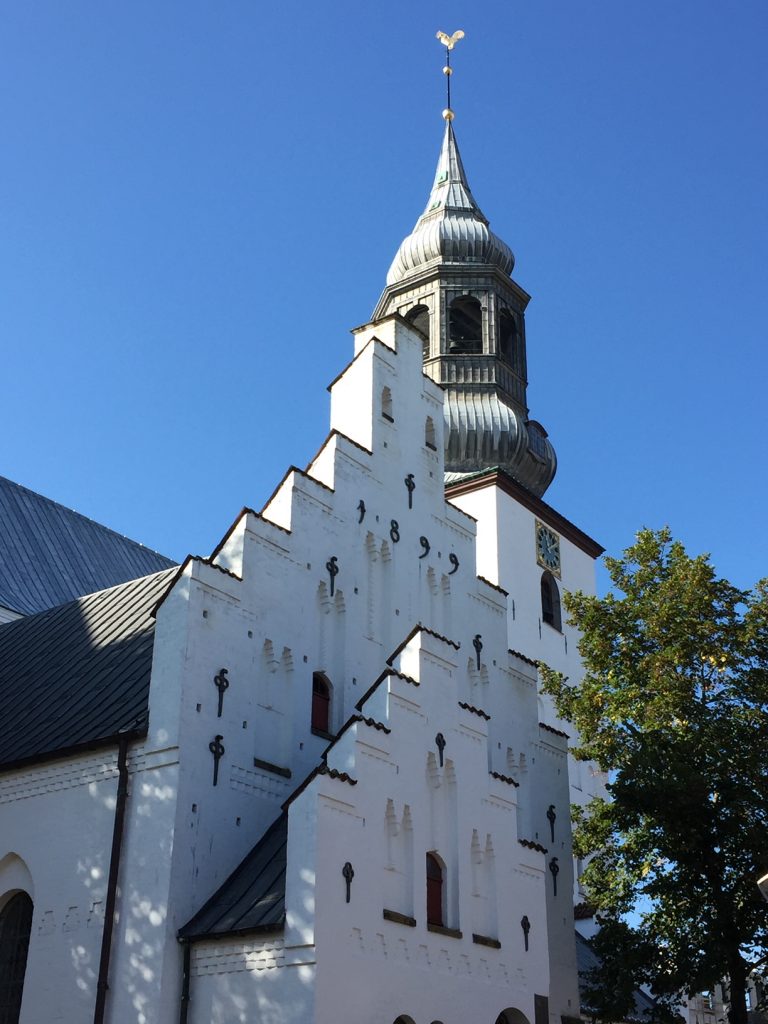 Nearby the old square, we entered the Holy Ghost Monastery. Founded in the early 1400s by a wealthy woman who wanted to help the sick, the monastery now houses 53 flats for Aalborg retirees. It is a very tranquil and peaceful place. I could see living there in retirement. However it’s not easy to secure an apartment. “It’s very popular,” said Ulla. “You have to enlist for a flat. If you live here your money goes to the monastery after you die.” 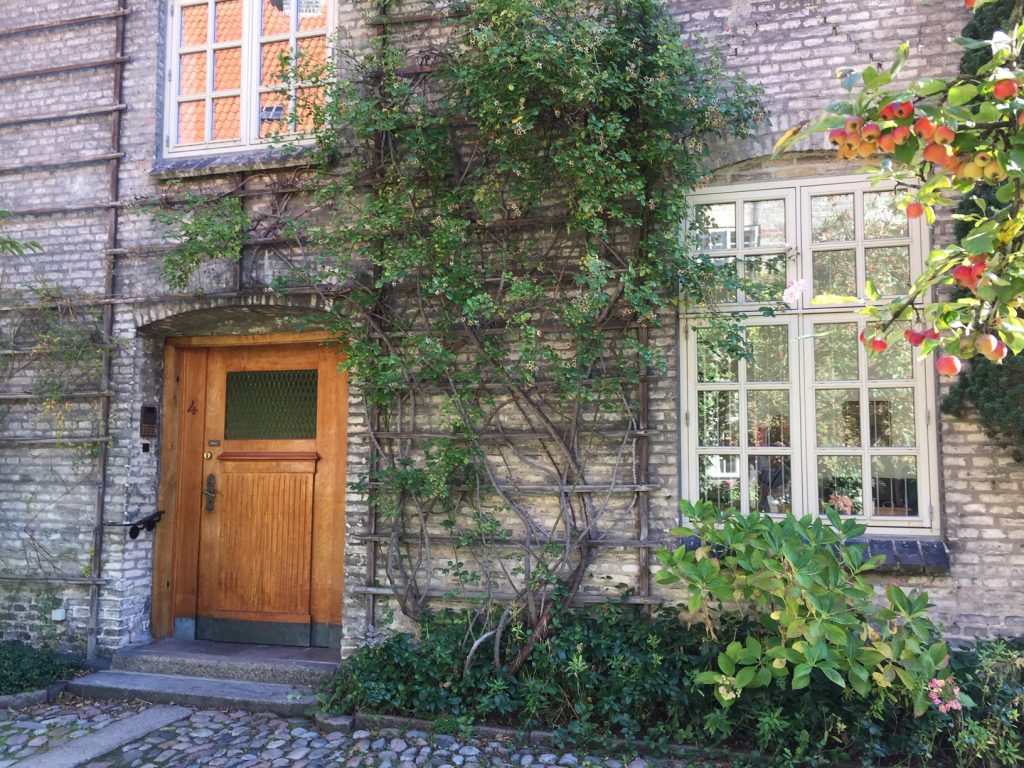 These monastery apartments are a great place to retire.

Ulla shared more about it’s history: “The monastery was the first hospital in Denmark. In the Middle Ages, nuns lived here and so did the monks in separate quarters.”

We walked around the back side of the monastery where the monks used to live. “The grammar school was here during World War II,” said Ulla. “There were seven boys who resisted the Nazis. They hid in the school. They practiced shooting as the walls were so thick. They were caught and sent to prisons and then to concentration camps. They survived the camps.” 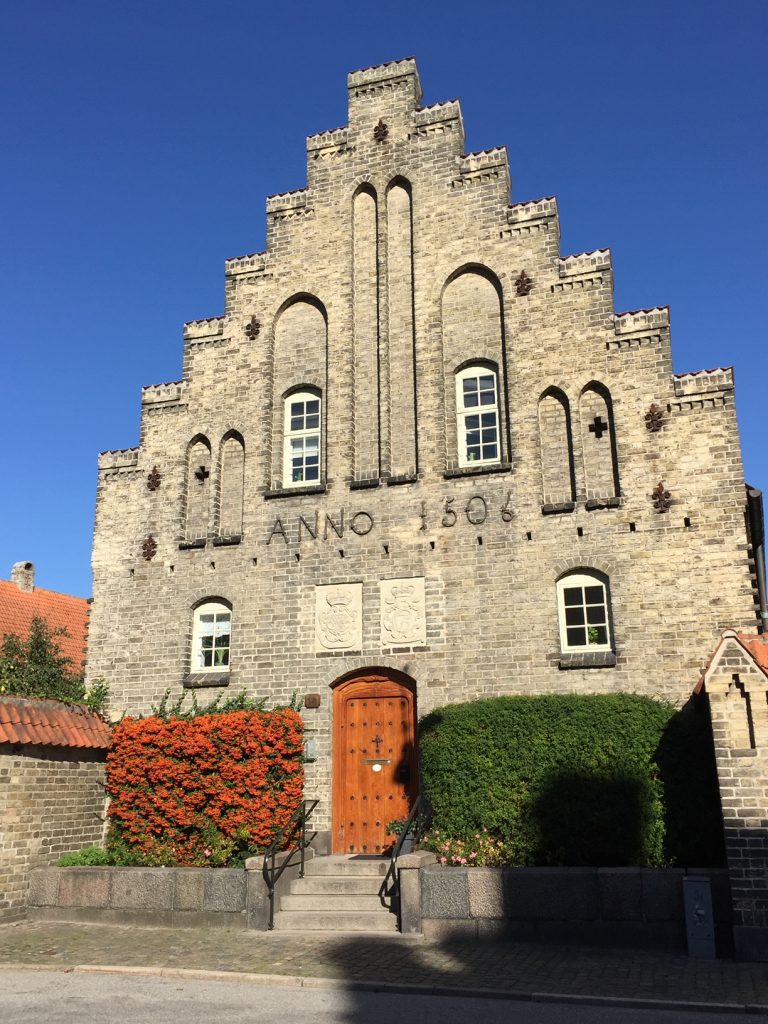 The grammar school was housed in the back of the monastery during WWII.

“Many Danes were killed during WWII,” said Ulla. “There was an airport in Aalborg. The Germans landed here to refuel for the Nordic countries.”

Further into town, we passed the old post office. The building was very tall, with posts on the outside walls. “They used carrier pigeons during WWII and also during the Cold War. Those posts are for the pigeons,” explained Ulla. 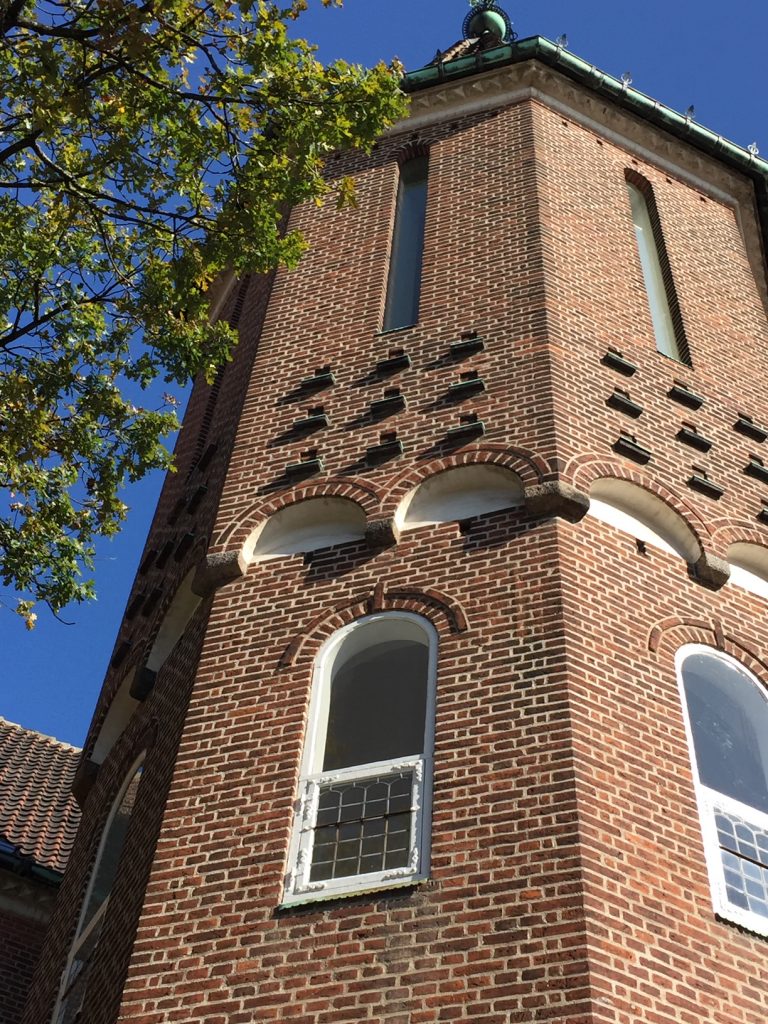 Can you see the posts for the carrier pigeons.

Aalborg Past and Present

Today, the city is doing well thanks to Aalborg University, which was built in 1974. “Twenty-five thousand students attend the university,” said Ulla. The popular major here is engineering. While taxes are very high – 40% of earnings – the Danes get a lot from the government, including free education at the university. 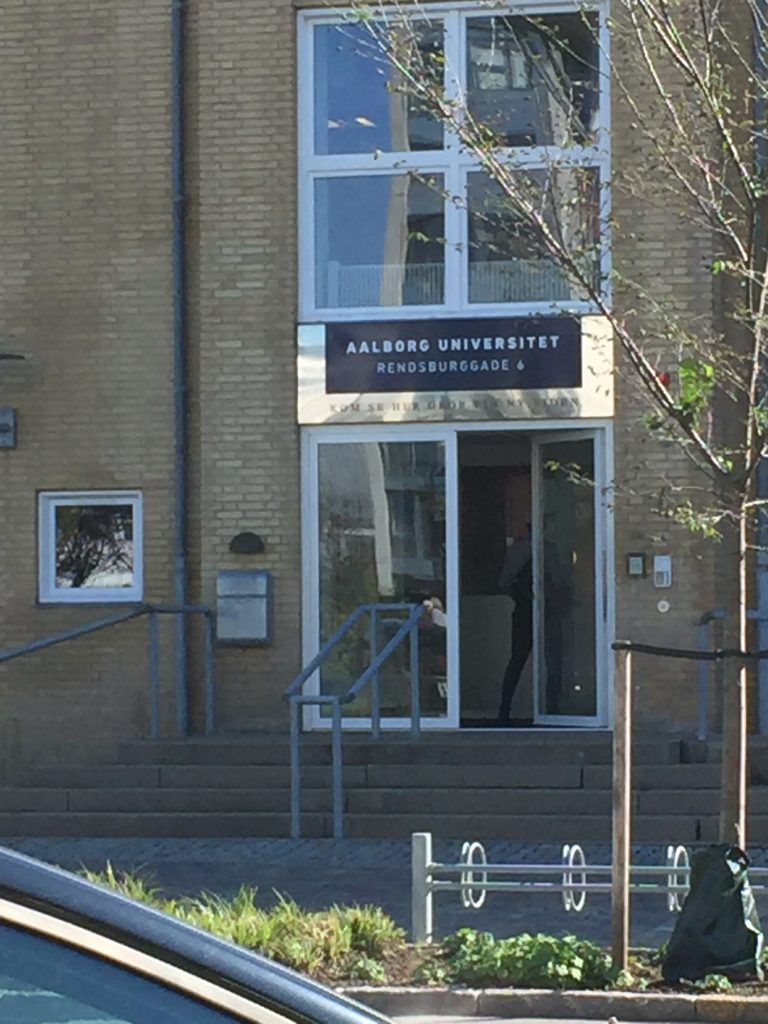 Aalborg University has buildings throughout the city.

Before leaving the city, it was time to revisit the past. Our route took us through the historic Hjelmerstald neighborhood, where the oldest (and according to Ulla, most expensive) street in Aalborg sits. Ooh, ooh, ooh, see the pictures below, I’d love to live on a block like this – it was so pretty. 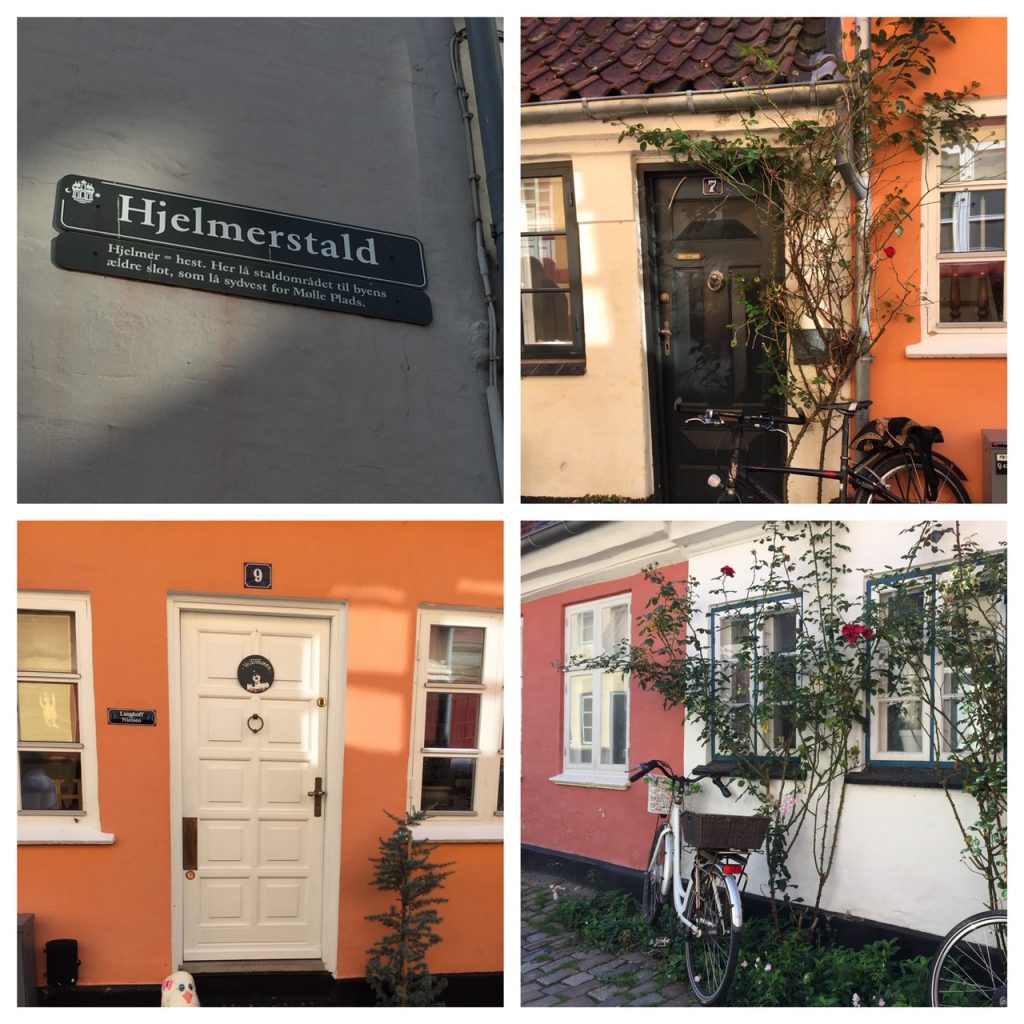 Hjelmerstald is an old and elegant neighborhood. 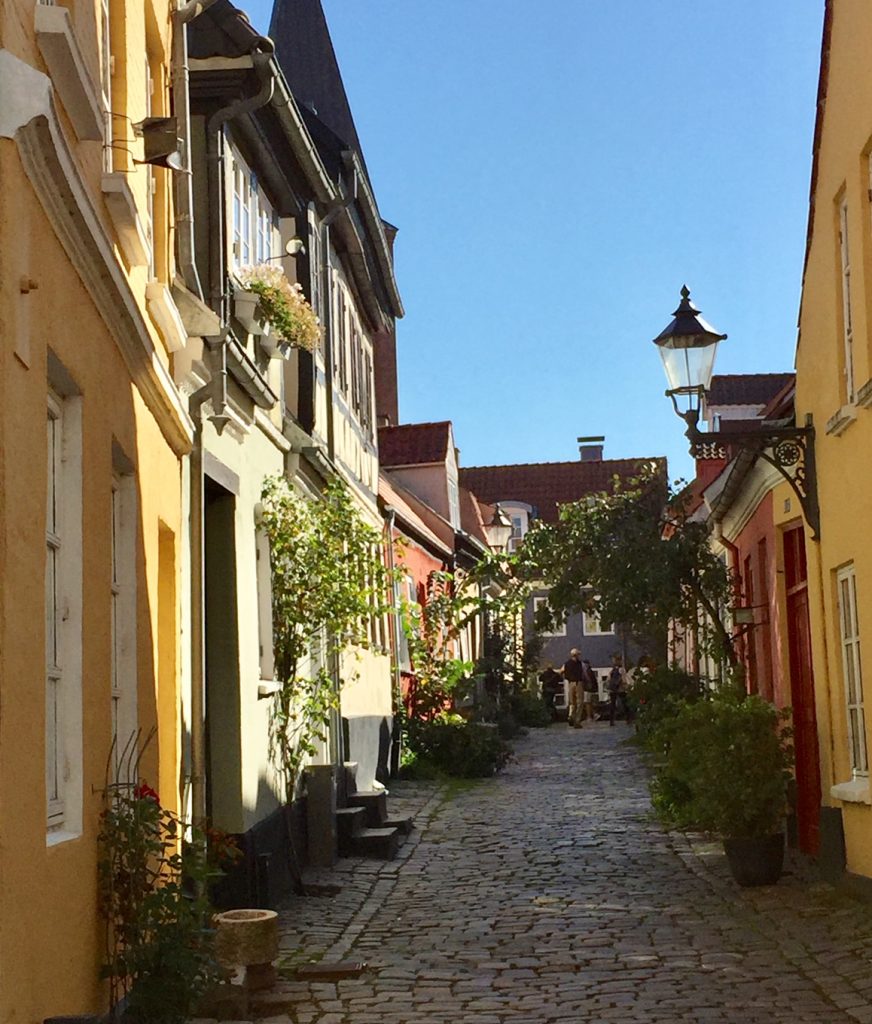 You’ll want to stroll down this street in Hjelmerstald

A final stop at the Church of Our Lady in Aalborg’s old town, brought us full circle. The site of the church has been ecclesiastical since about 1100, even though the present building is of a more recent date. “There’s always a ship hanging in the Danish church to honor the seafarers who helped found the community,” said Ulla. 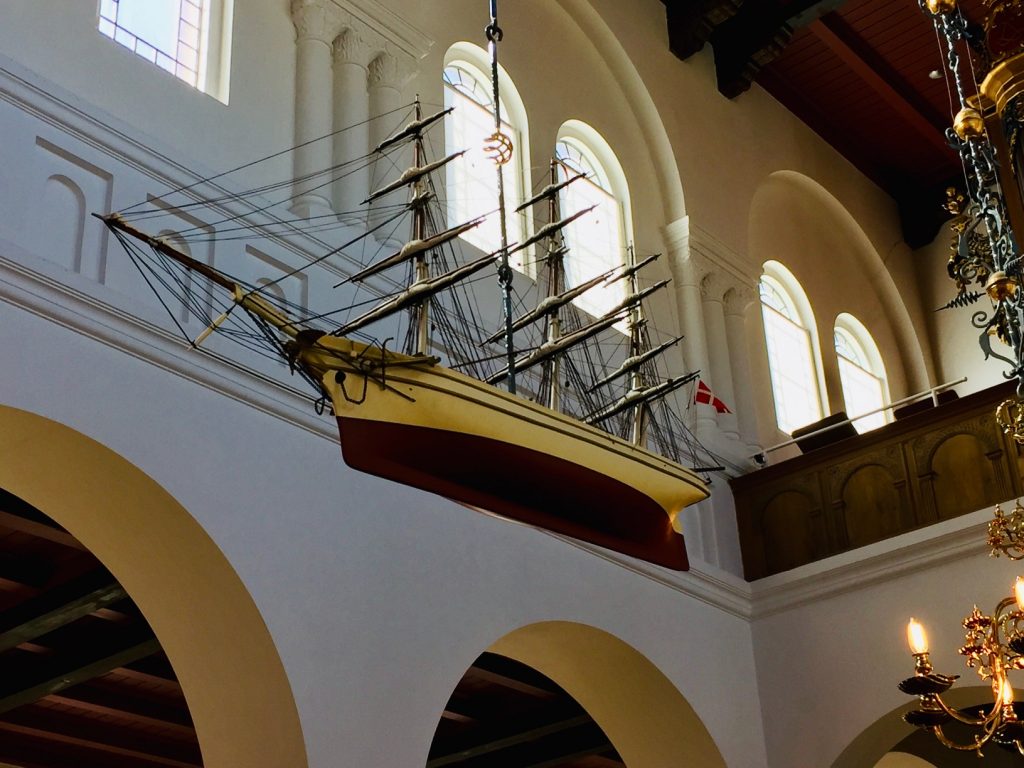 Ships hang in the Danish church to honor seafarers.

At the base of the Aalborg port was a shop filled with lucky trolls. According to the display, Thomas Dam who grew up in Northern Denmark, is the father of the trolls. I didn’t buy any trolls. They were quite expensive. But I did stop to take pictures. 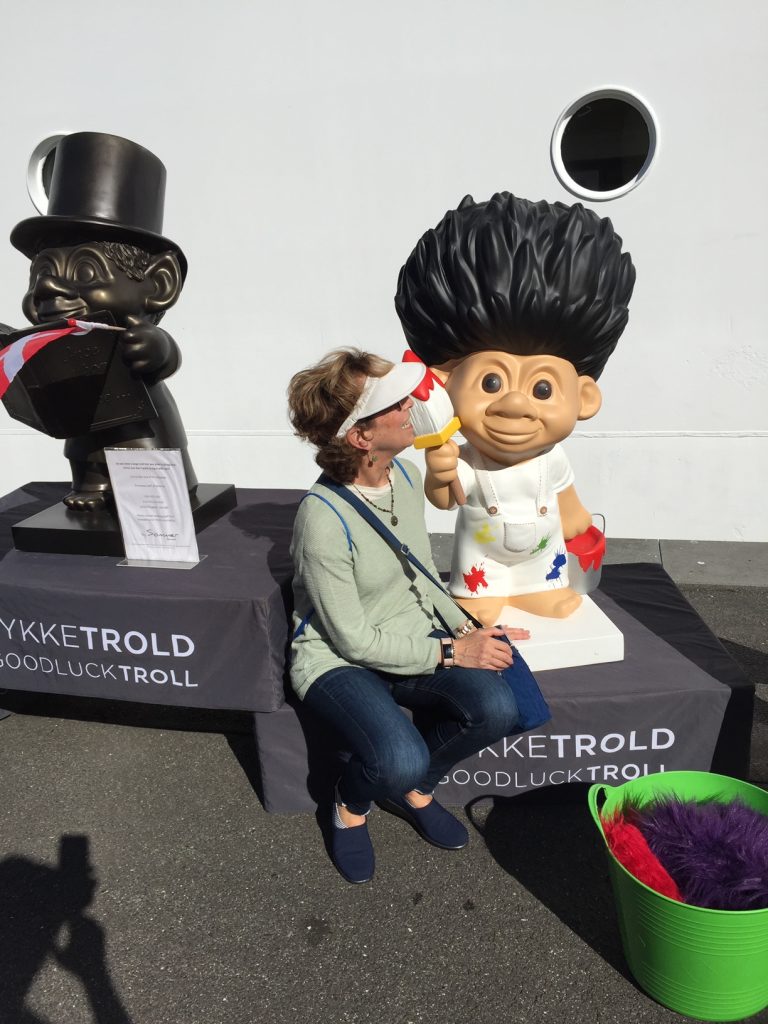 Did you collect trolls as a kid? They were created by a Danish man.

The morning had passed quickly. This afternoon we would be setting sail for Stavenger, our first port in Norway. Ohm, ohm, ohm, sailing through the fjords, it was time to take a seat on deck and enjoy the view. 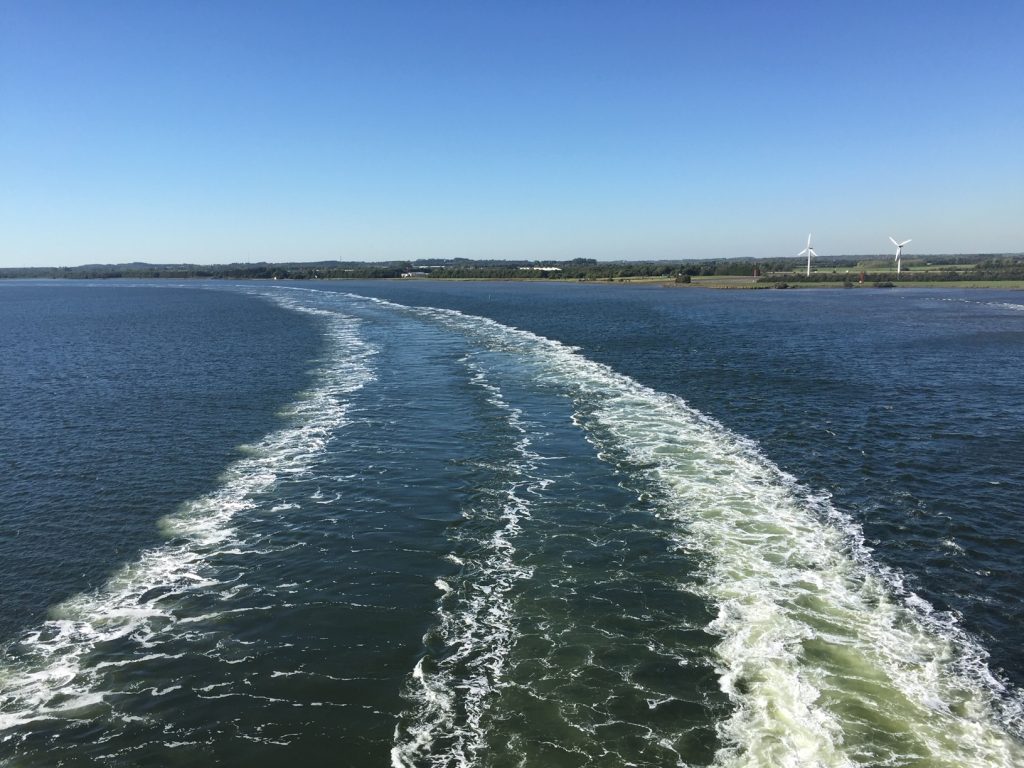 One of the nicest benefits of cruising on the Viking Star is the view from the front deck.

P.S.: In case you missed my first blog posts about my Viking Homelands cruise and my Berlin pre-trip, check them out here:

♥ All Aboard Viking Star: A Great Way To Discover Scandinavia
♥ A First Taste of Berlin’s Culture and Cosmopolitan Cuisine
♥ A Walking Tour of Berlin: Being in the Present, Remembering the Past
♥ Sightseeing in Copenhagen: A Charming Capital City
♥ Foodies Will Love This Culinary Tour of Copenhagen