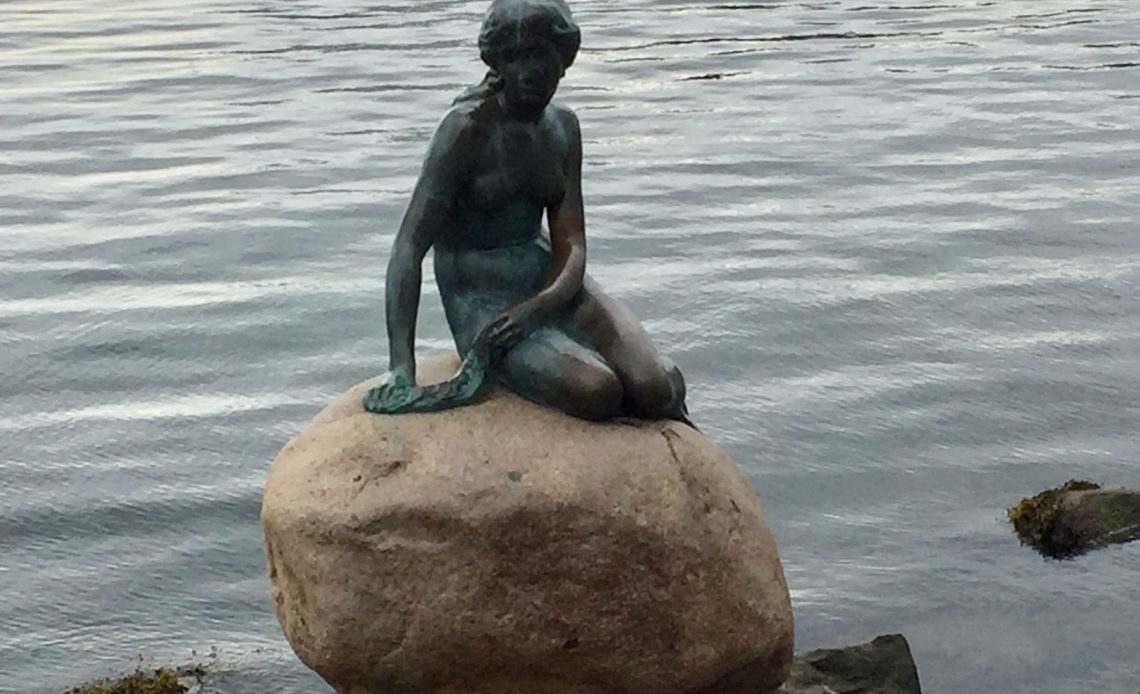 Are you ready to join me aboard the Viking Star as I recap my cruise through Viking Homelands of Denmark and Norway?  (Note: My voyage was compliments of Viking Ocean Cruises* and my lucky traveling companion was my sister N.)

Please come join me. Our first port is Copenhagen, Denmark’s charming capital city. Our morning will be spent sightseeing, learning about the city step-by-step. 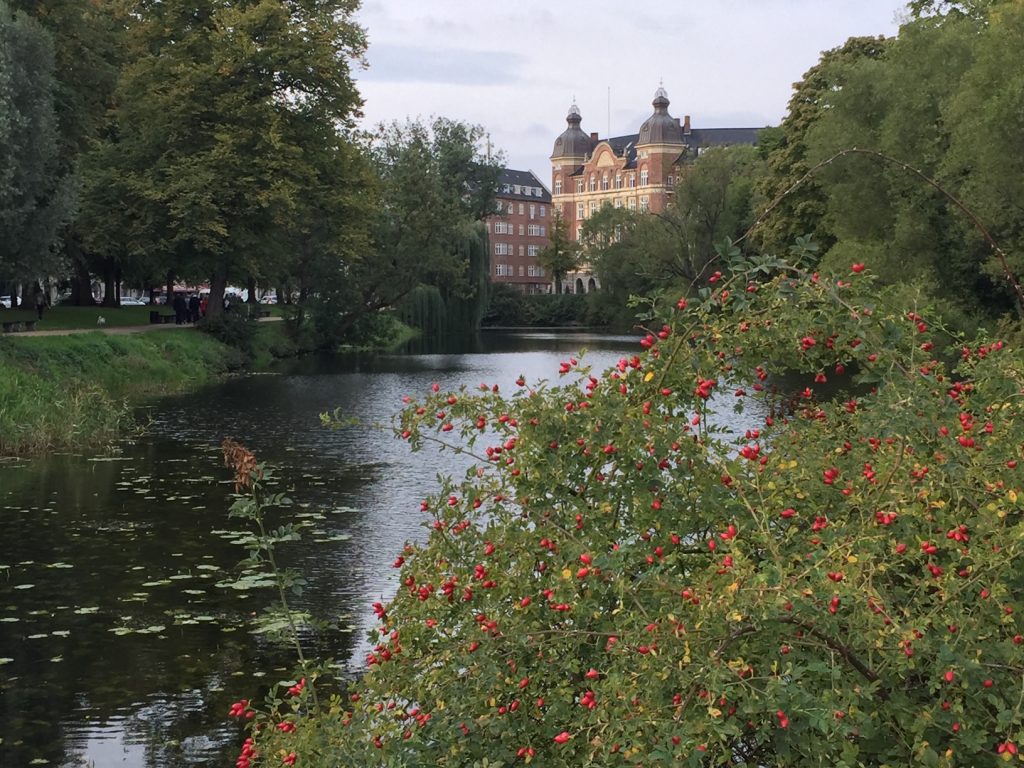 Copenhagen is a charming city

A Walking Tour of Copenhagen

Our tour starts right at the waterfront. No buses to board to get into the city. We will be walking. It’s in the mid 60s with a chill in the air. Hopefully the rain will hold off for the next two hours while our guide Felix shows us around.

“Bicycles are popular here,” says Felix. “Denmark is a very flat country, as flat as a pancake.” (Ooh, ooh, ooh, if you plan to visit I recommend bicycling around the city. If I had known how flat it was I would have done a bicycle tour for sure. Maybe next time!) 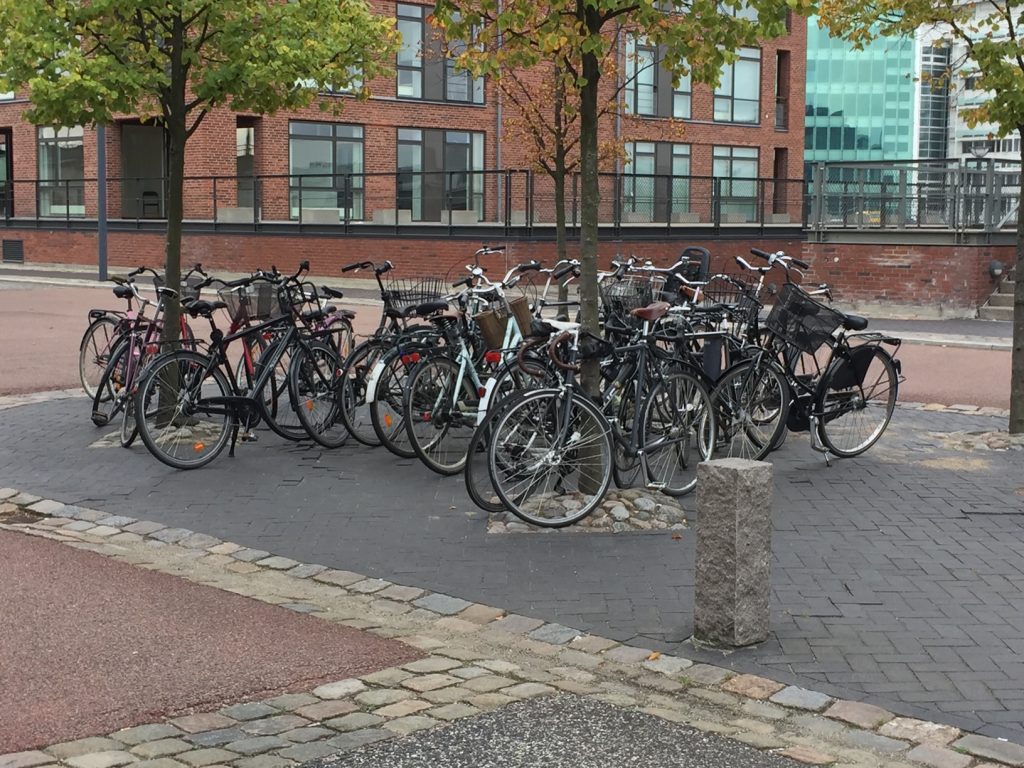 As we walk, we pass exercise equipment outside the residences. The beauty of the equipment blends with the community. It’s evident that design is a big deal in Copenhagen. “Danish design is very elegant and simple. They want the people to interact with their community,” says Felix. 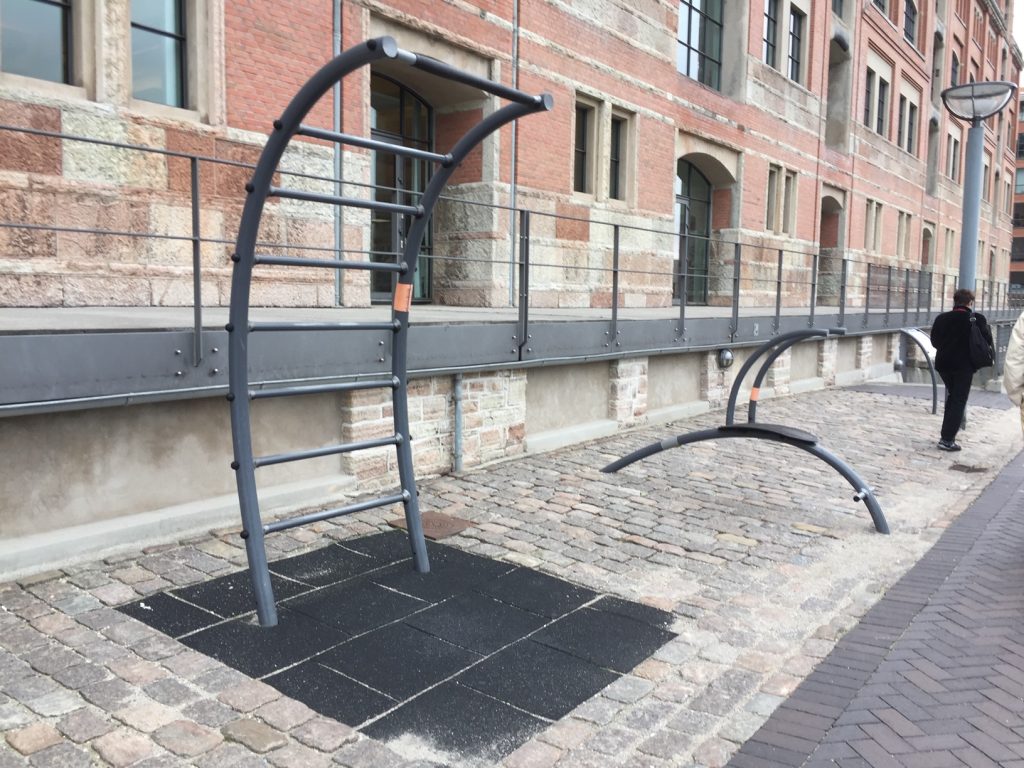 The exercise equipment is a design element in the community

To get to the city we walk through a stone fortress adjacent to a large building. “The building was built in 1664,” says Felix. “It is now offices of the ministry.” 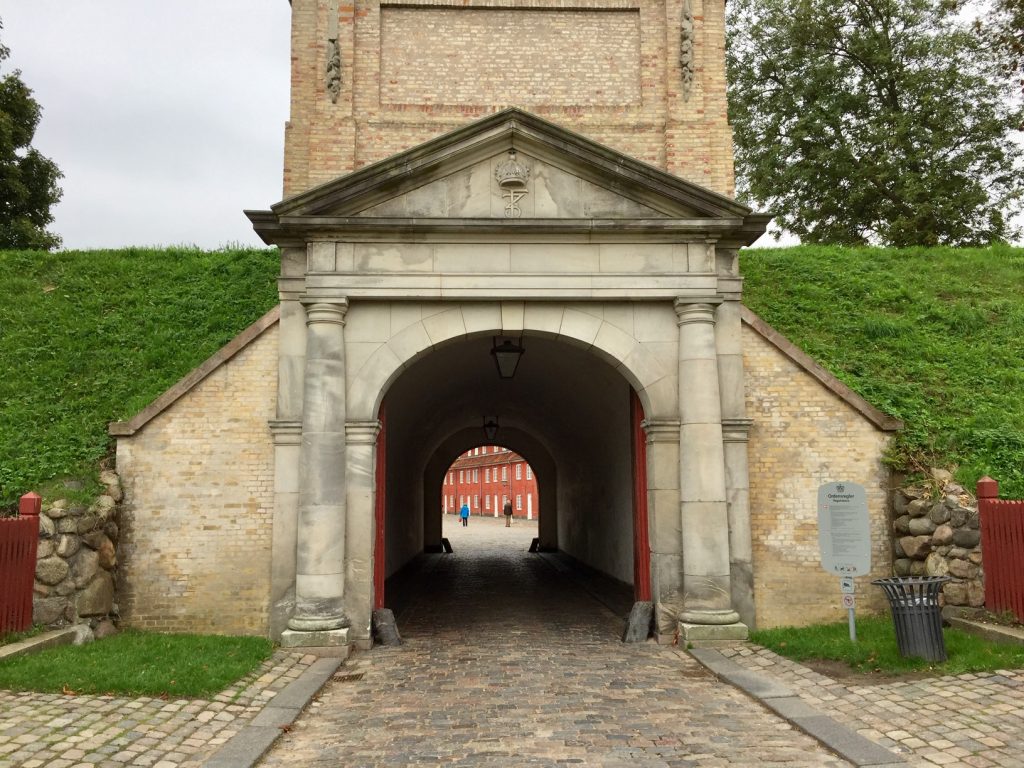 We walked through an old fortress to enter the city

Felix provides some Danish prompts to  welcome us. “Hi means hello,” he says. “Tak means thank you. T is pronounced like S. So it is pronounced Sak. And Hi, hi, means goodbye.”

We walk a little further and come upon a Soldier Memorial honoring those who died in World War II. Felix tells us that the “Danish government cooperated with the Germans during WWII so Copenhagen wasn’t destroyed.” 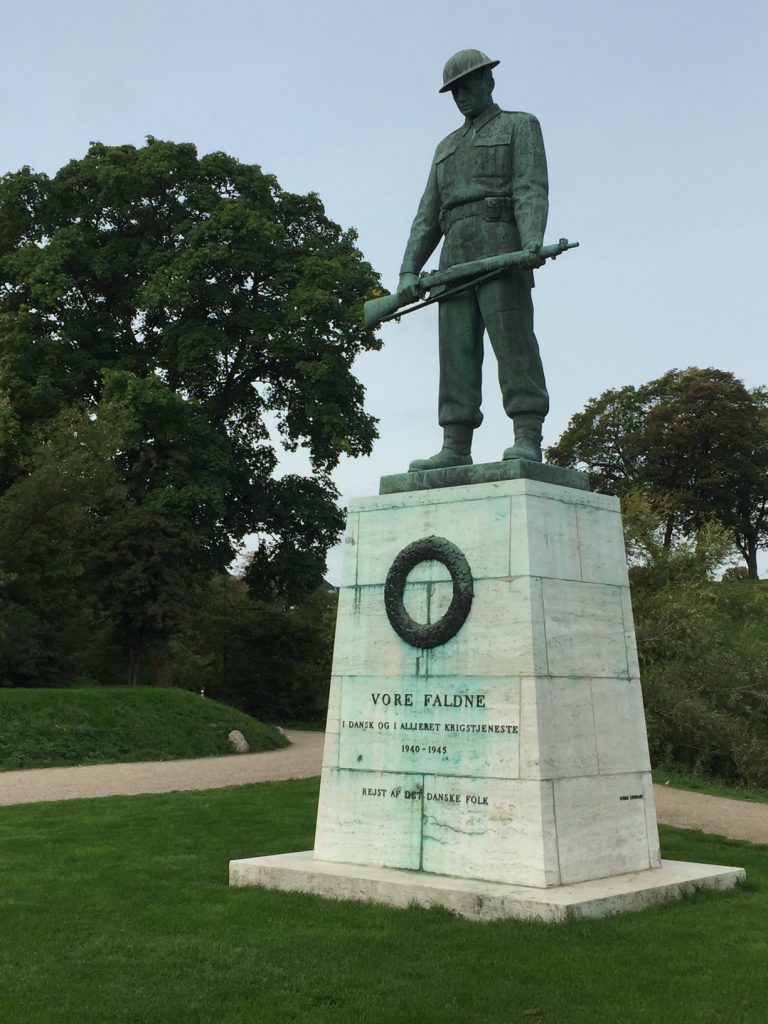 The War Memorial honors the fallen

What’s that up ahead? We have reached Amalienborg Palace, the winter residence of the Queen of Denmark. It is a grand square with the changing of the guards, just like at London’s Buckingham Palace. 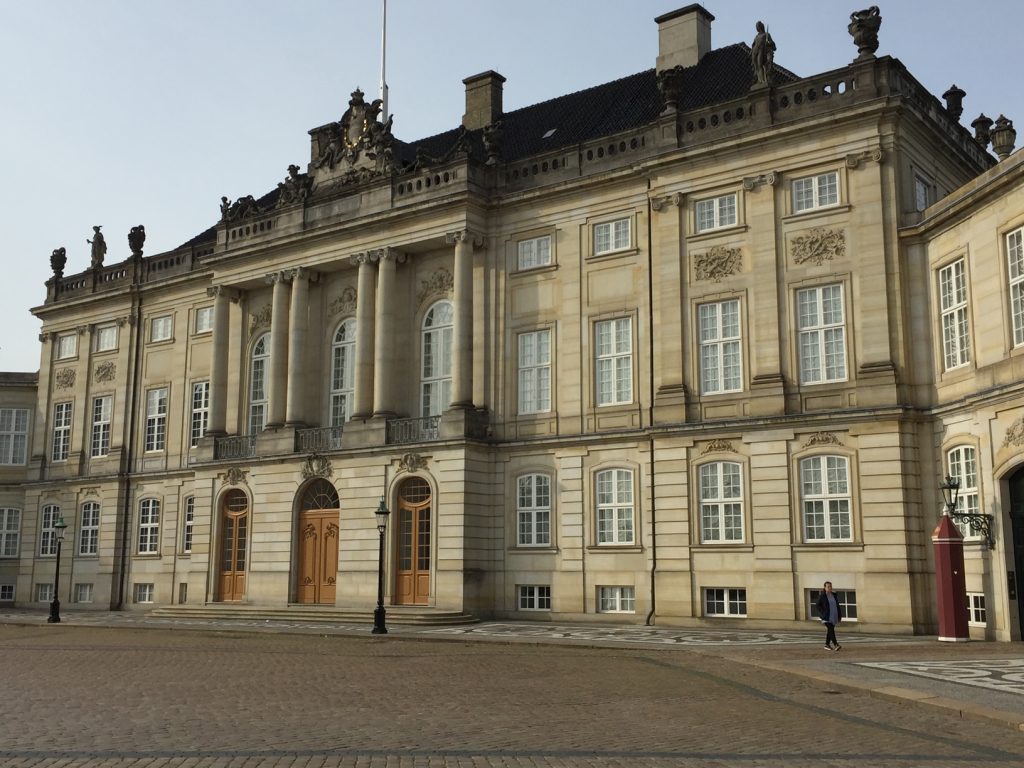 “Queen Margaret II of Denmark is 78 years old and stays here in the winter, along with her son and his family,” says Felix. Other times she resides at another castle outside the city. 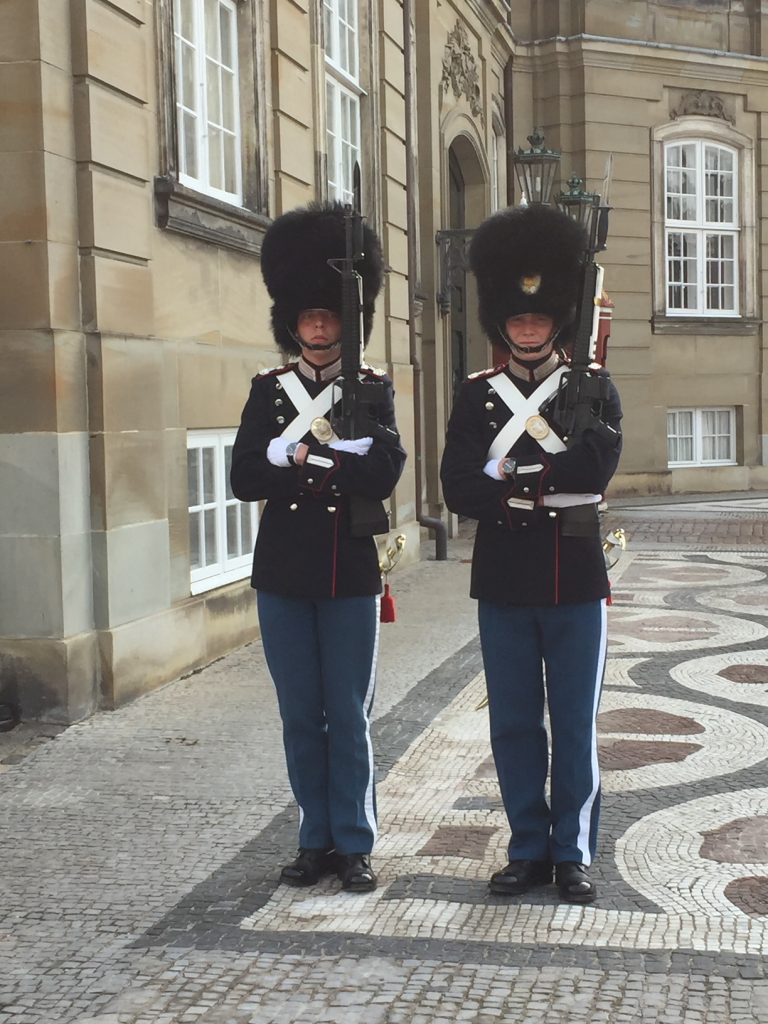 The Royal Guards watch over the Palace

Alongside the square is the beautiful Amalie Garden with its centerpiece fountain and across the harbor is the New Opera House, a very contemporary building. 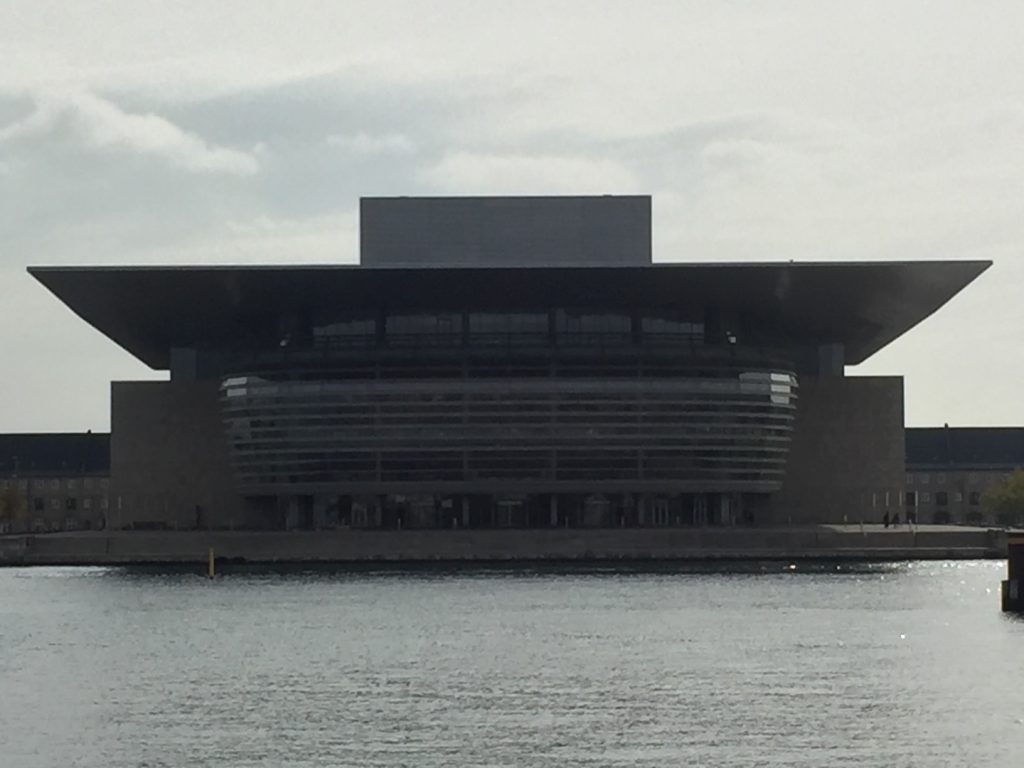 A Long Winter For Swimming

Felix points out the artificial island that was created on the waterfront. It’s surprising to learn that Copenhagen is the best city for swimming, especially since the water is about 68 degrees and winter lasts from November to April. “Typical weather is cloudy and the days get shorter — there are only six hours of daylight,” says Felix. “People dig a hole in the ice and go swimming.” (Ooh, ooh, ooh, I’m shivering just thinking about it.) 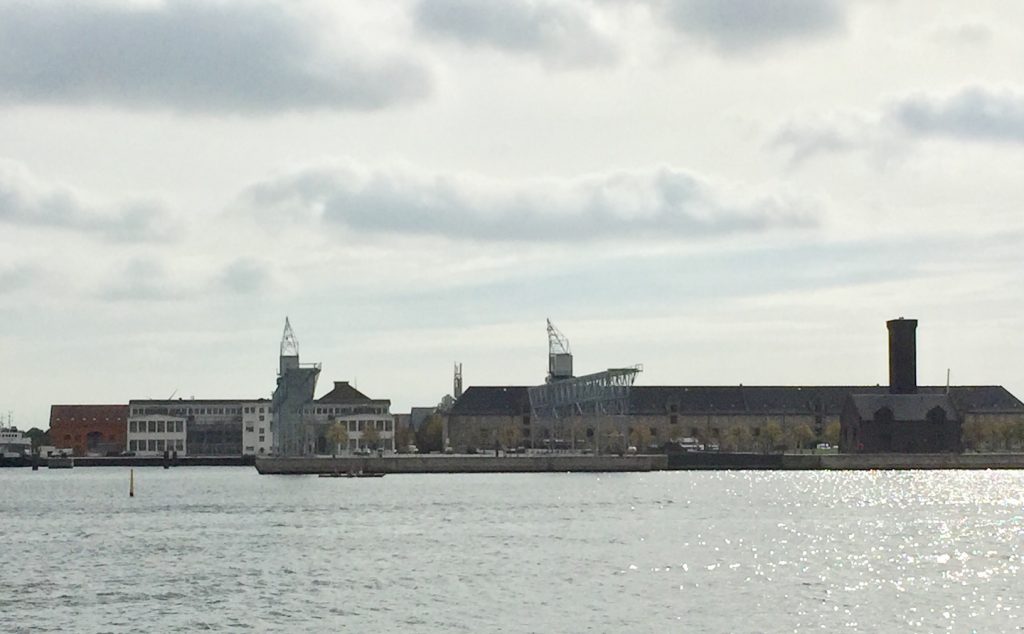 People go swimming in the harbor in the wintertime

The harbor has always been a busy place. “From 1880 to 1935 ships sailed from Copenhagen to New York City,” says Felix.

There’s more to see. Across the way is a large modern building with a slanted roof. Felix remarks how the Danes value sustainability: “Not only can 400,000 tons of garbage be burned in that building, but people can also go climbing on top of the rooftop.” We learn that windmills are used to produce electricity for the city and that alternative energy and biotechnology are a big focus in Denmark. 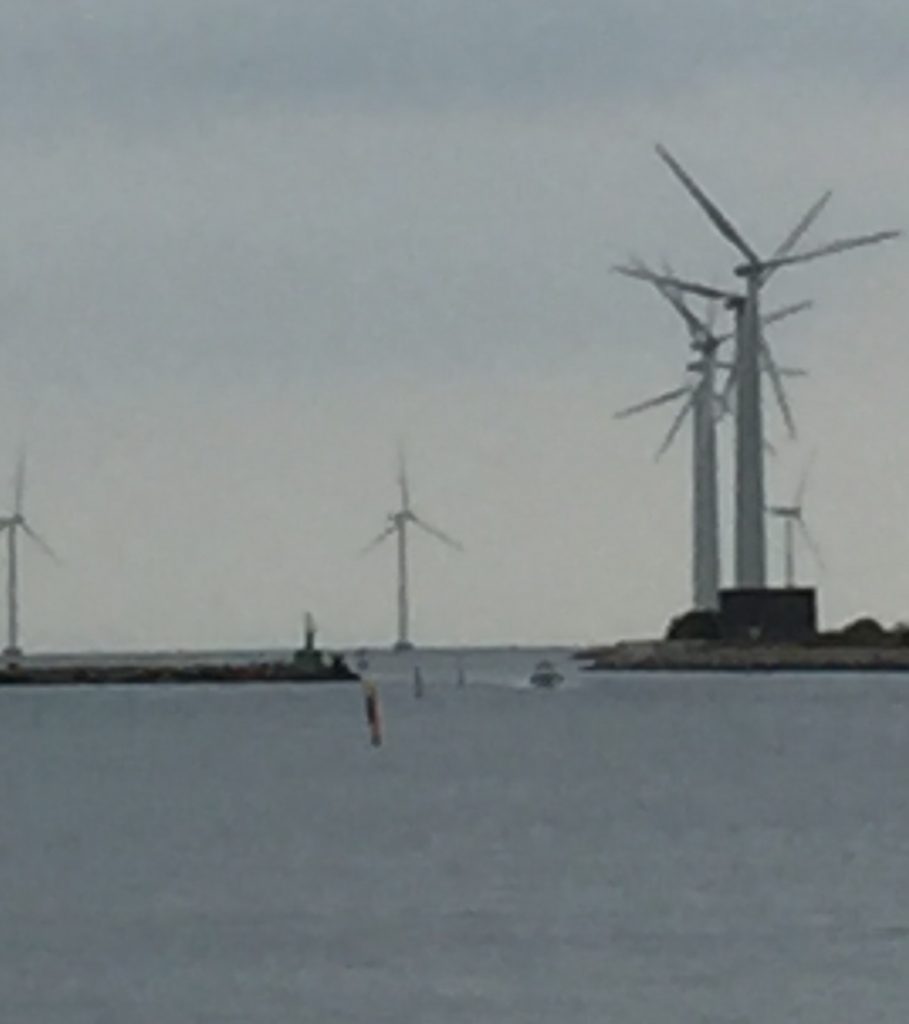 We pass a statue of the Queen Mary, who seems out of place until Felix informs us about Danish history. “The Virgin Islands belonged to Denmark until they sold it to the United States,” explains Felix. ” That’s why she is the Queen Mary. She is holding a knife for the sugar plantation. She is the first black statue in the city.” 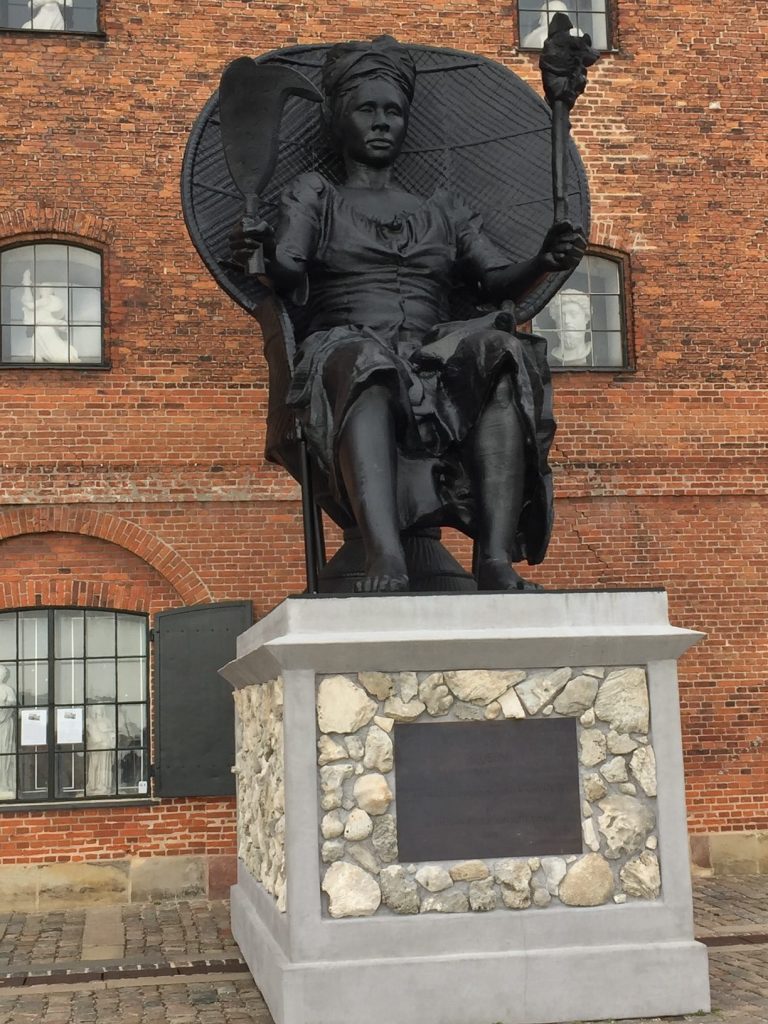 There’s more folklore and history to hear about as we stop at the monument of the Goddess of Copenhagen. “The Goddess turned four sons into oxen to plow the land and that land turned into Denmark,” says Felix. 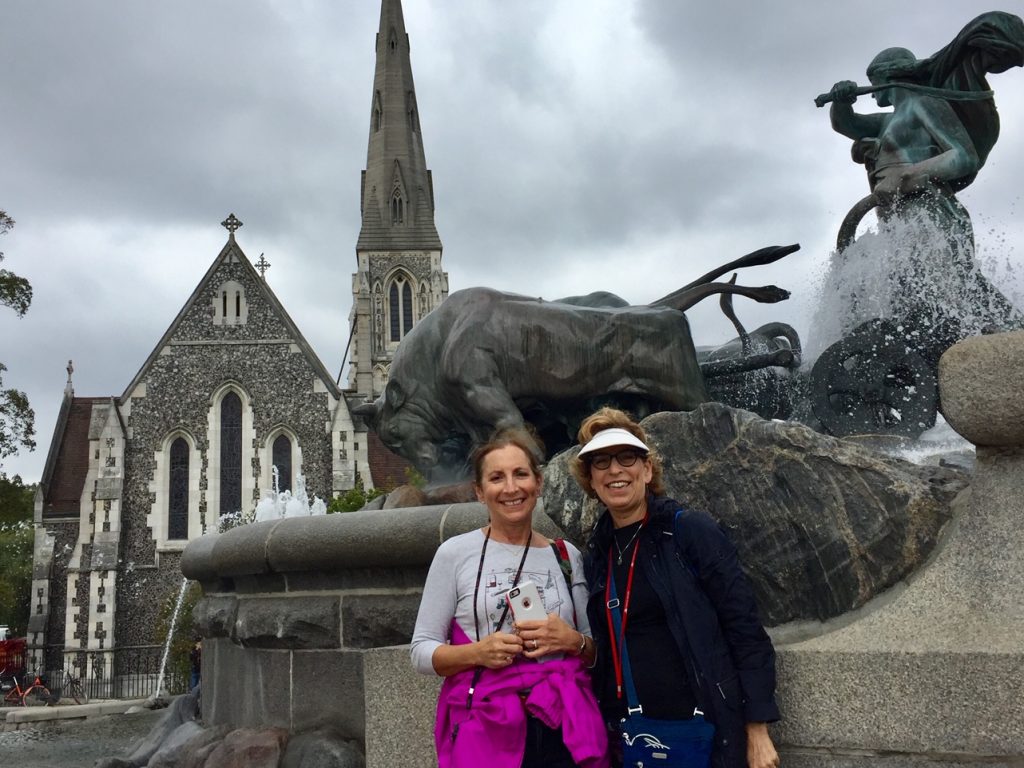 Saving the best for last, it’s finally time to see The Little Mermaid, one of Copenhagen’s most famous tourist attractions.

She sits all alone on a huge rock at Langelinje Pier. According to Visit Copenhagen, “the sculpture is made of bronze and granite and was inspired by Hans Christian Andersen’s fairy tale about a mermaid who gives up everything to be united with a young, handsome prince on land.” 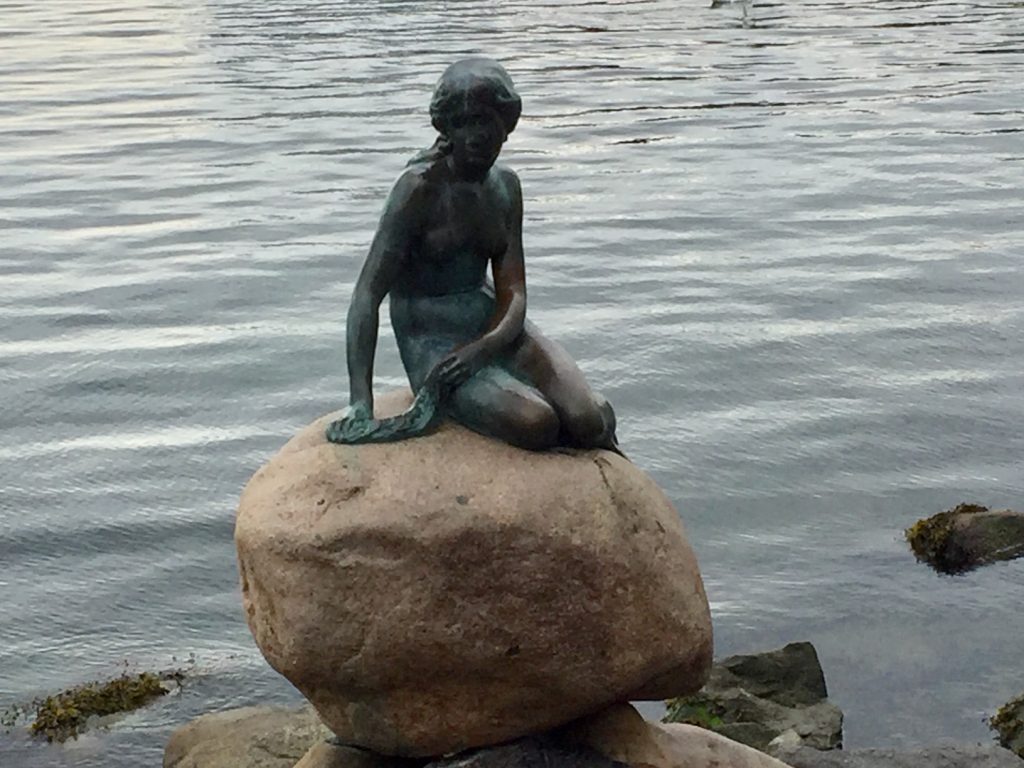 The Little Mermaid is a major tourist attraction

The Danish brewer Carl Jacobsen (founder of Carlsberg beer) fell in love with the character after watching a ballet performance based on the fairy tale and he commissioned the sculptor Edvard Eriksen to create a sculpture of the mermaid. In 2013 the sculpture turned 100 years old.

“If you look closely at her face she is sad,” admits Felix. “She is sad because she wishes she could marry. The fairy tale follows closely after Hans life as he never married the one he loved.”

Do you remember the fairy tale?  She was a princess under the water. When she came up above the water at 15 she fell in love with the prince. She asked to have legs. But her wish wasn’t granted. So she forever became princess of the sea.

A Copenhagen Culinary Excursion To Come

Our walking tour is over. Felix recommends we try Danish rye bread, herring and pastries before we leave the city. That will happen this afternoon during our culinary excursion on the Copenhagen Food Lover’s Tour. Ooh, ooh, ooh, get your tastebuds ready! 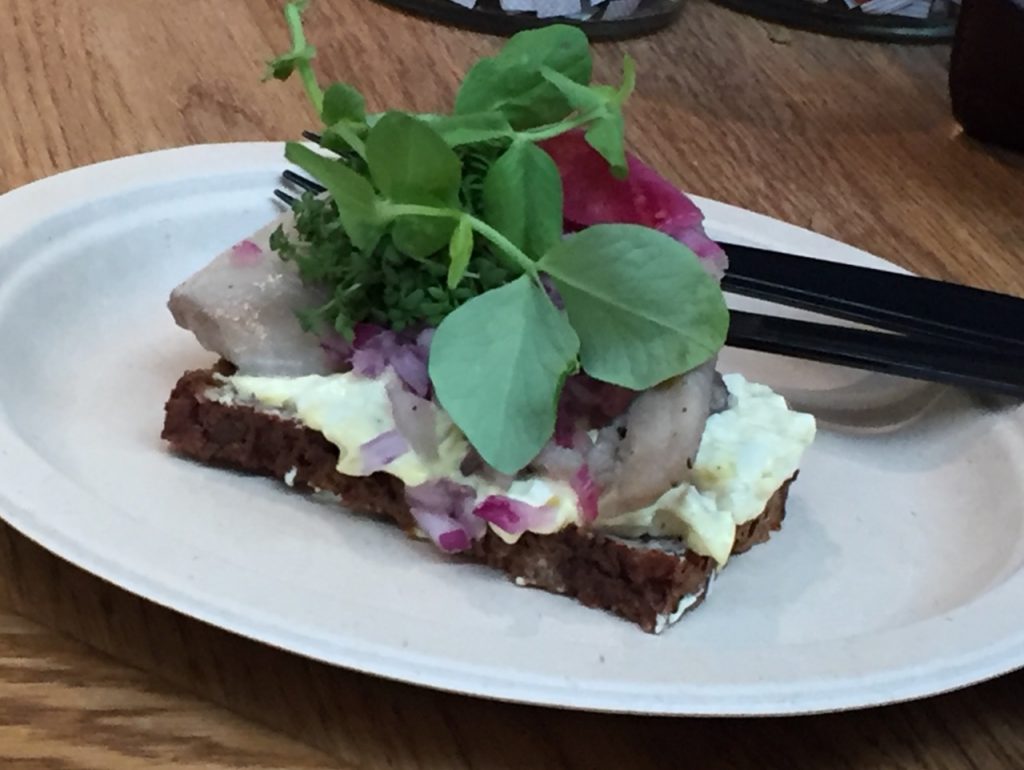 Herring Smorgasbord is a culinary favorite in Copenhagen

For now, it’s only fitting to say hi, hi until we meet again for more sightseeing in Copenhagen.

P.S.: In case you missed my first blog posts about my Viking Homelands cruise and my Berlin pre-trip, check them out here:
♥ All Aboard Viking Star: A Great Way To Discover Scandinavia
♥ A First Taste of Berlin’s Culture and Cosmopolitan Cuisine
♥ A Walking Tour of Berlin: Being in the Present, Remembering the Past