My Viking Journey: The Secrets of the Ancient City of Acre 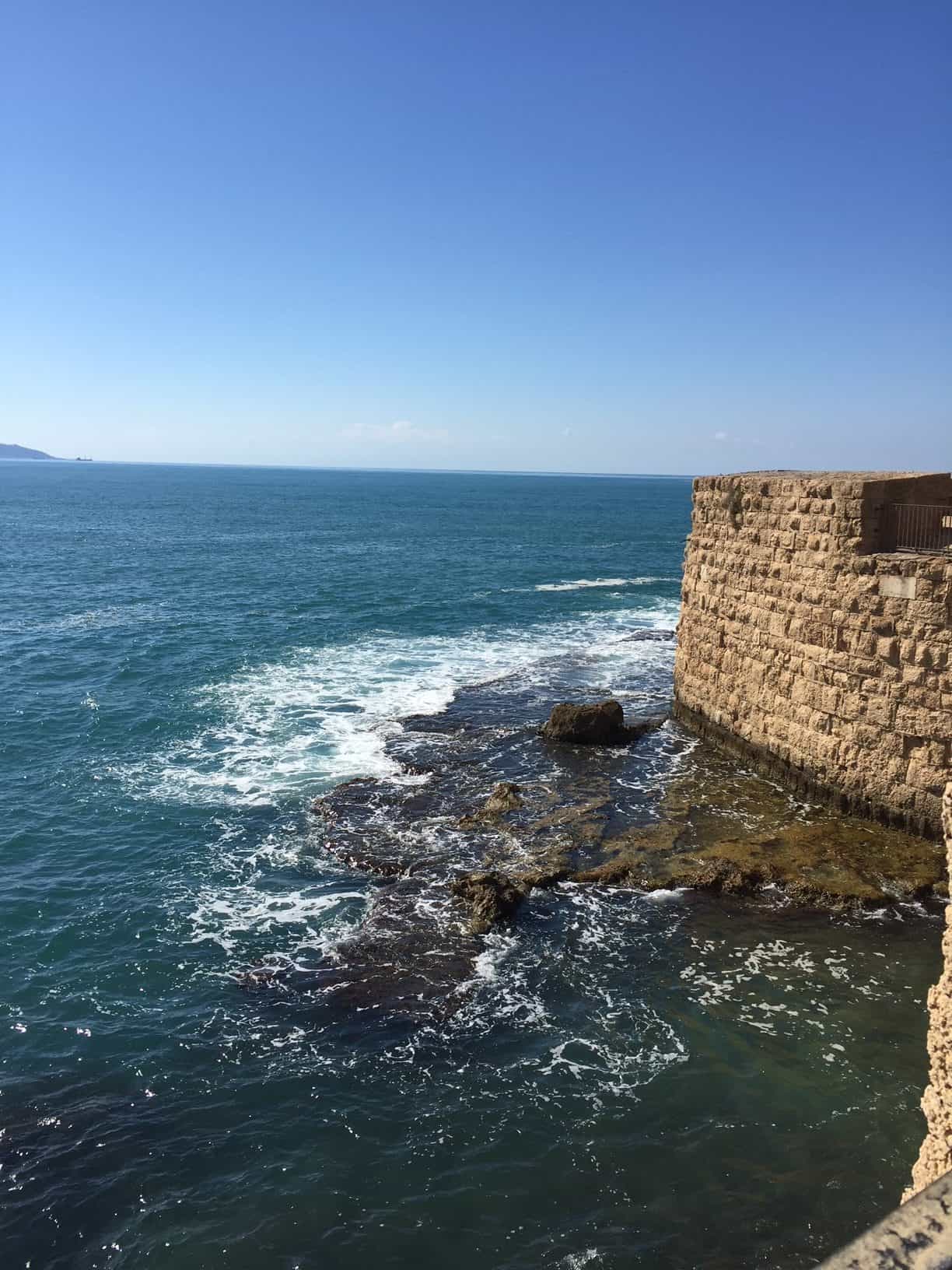 It was Friday, our final day in Israel. After visiting Jerusalem and Haifa earlier in the week, our excursion would take us to the ancient city of Acre. For sure, my Viking journey on the luxurious Viking Star ocean liner to the Cities of Antiquity & The Holy Land was exceeding expectations. My boyfriend L and I were traveling courtesy of Viking Cruises.* 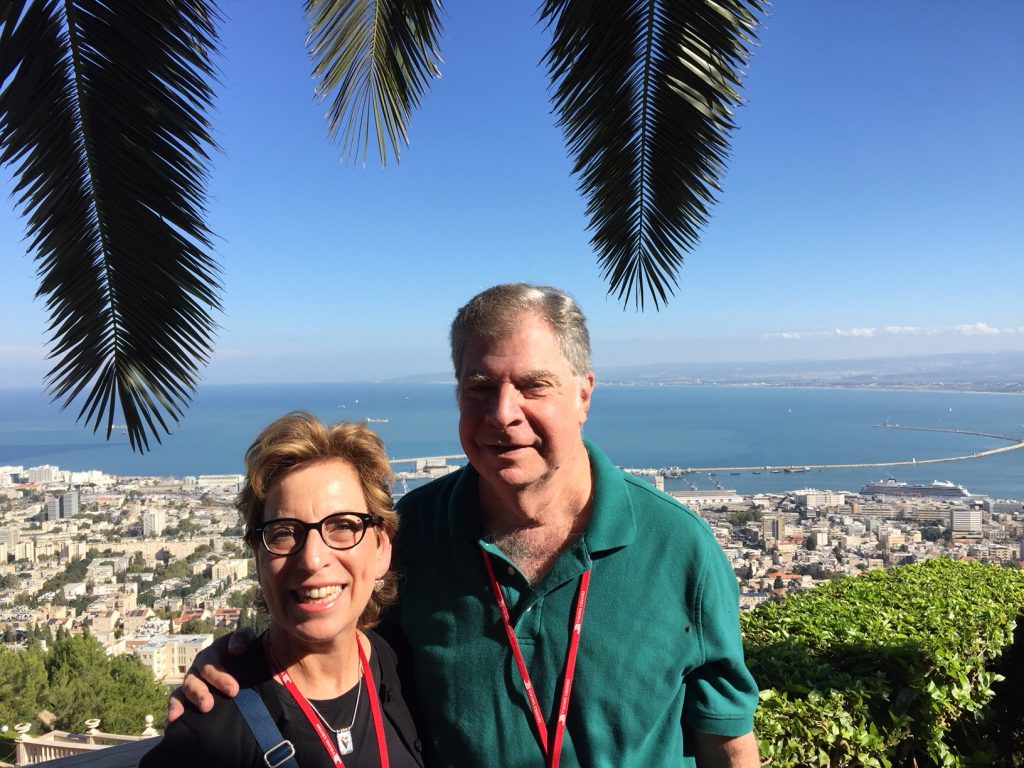 My boyfriend L and I traveled to Israel with Viking Ocean Cruises.

“Tomorrow will be Shabbat, so we say ‘Shabbat Shalom’ because it is the Sabbath,” said our tour guide Simon. “Acre’s markets will be crowded as people shop for food before sundown.” 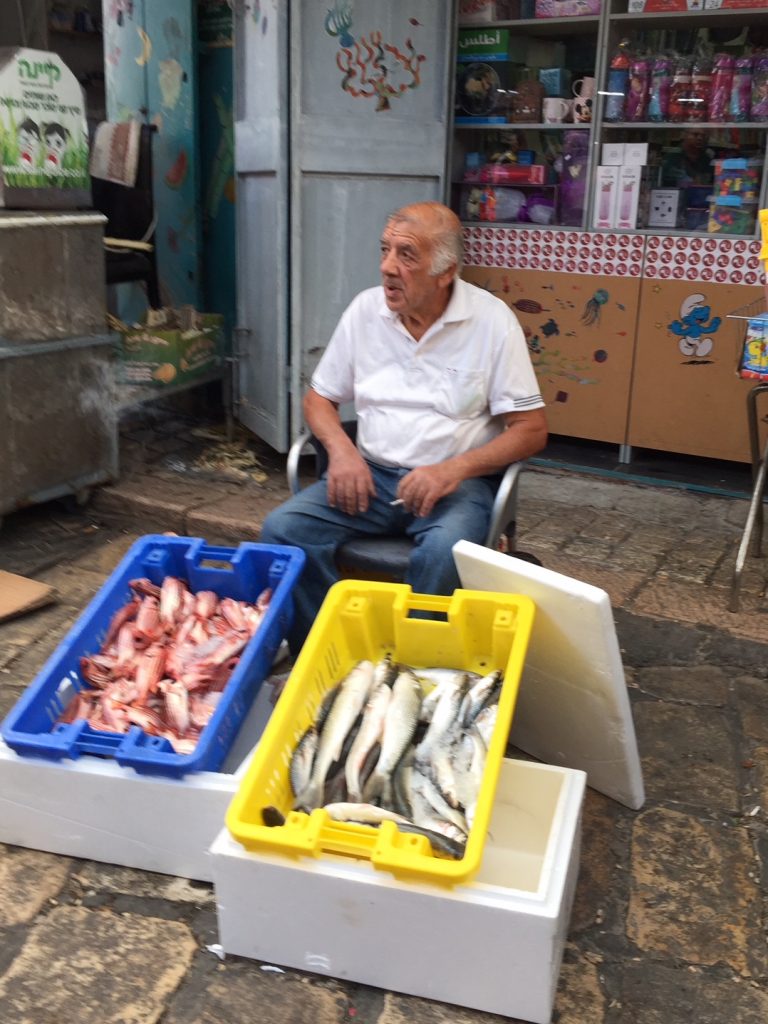 A City Above and A City Below

“Acre is a 2000 year old city,” Simon said. “Acre was the main port in the north of the country during the 19th century. Then the port of Haifa was built and became the main port.” 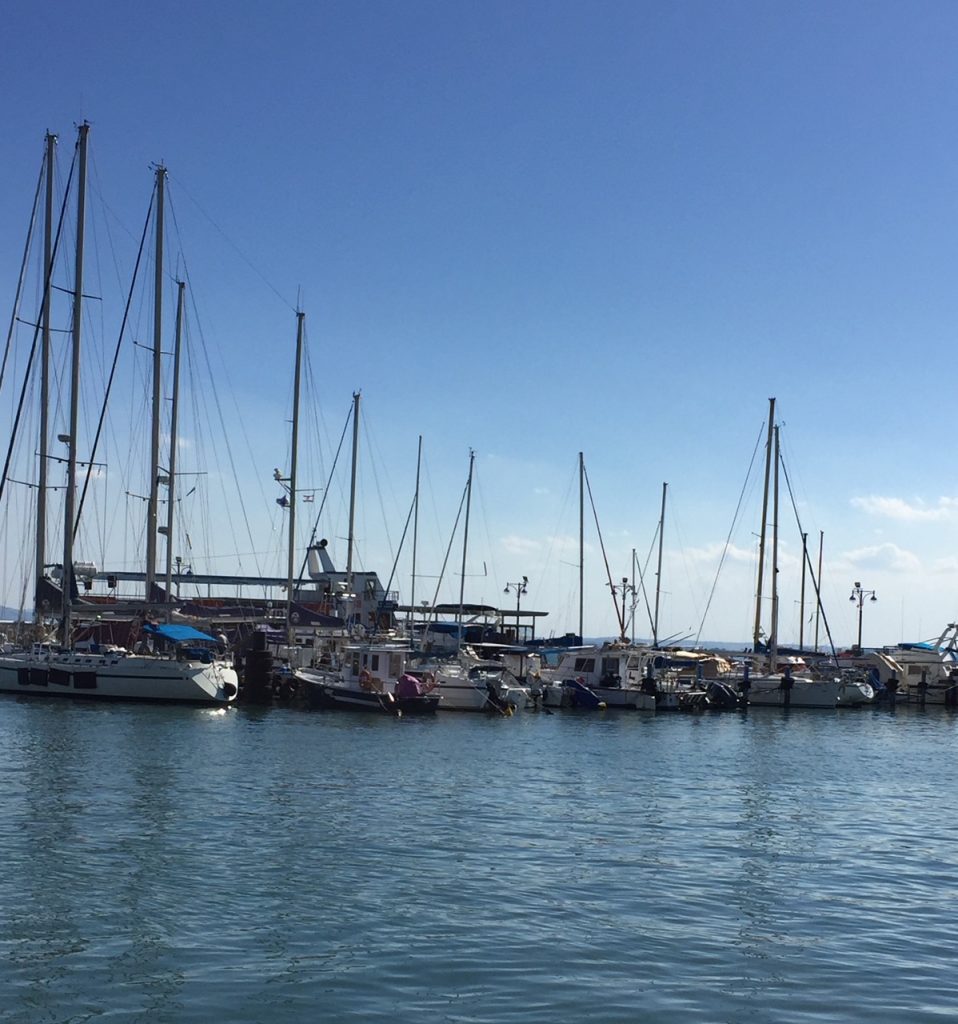 The port of Acre is home to sailboats and fishermen.

The Old City of Akko (Akko means Acre) is recognized as a UNESCO World Heritage Site. It is an historic walled port-city with continuous settlement from the Phoenician period. As we walked, we learned more about its secrets. According to the Israel Ministry of Tourism, “Only in the Old City of Akko will you discover a perfectly preserved Crusader city being unearthed and brought back to life, located directly under the city built above it. 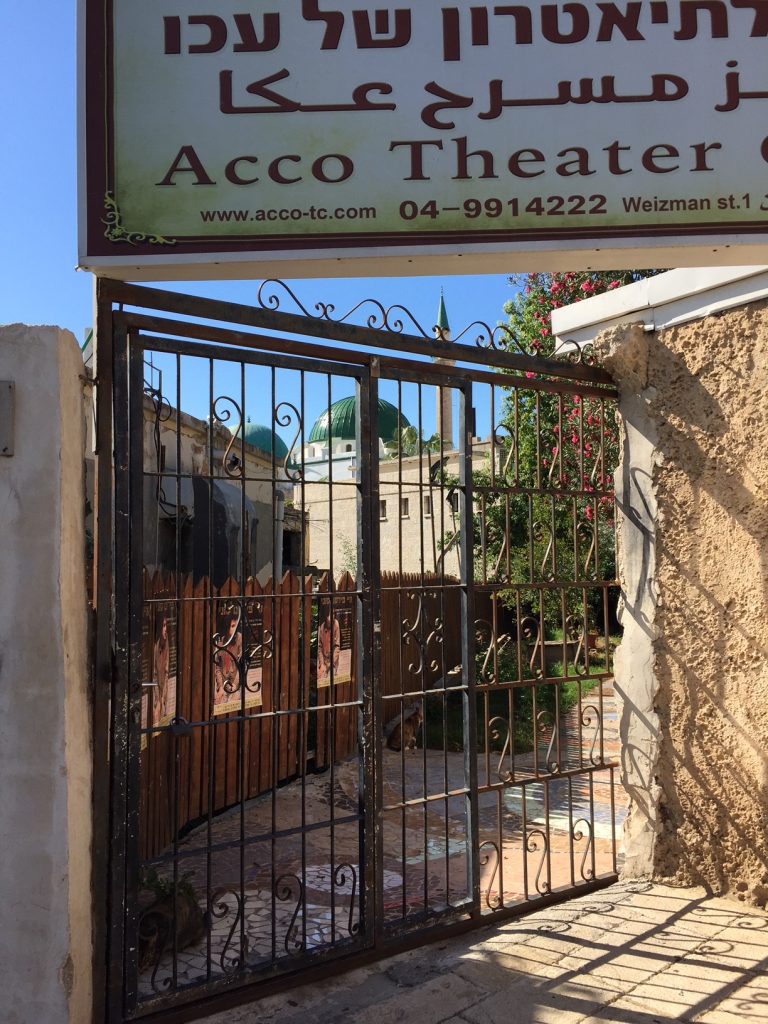 We entered the Ancient City by the theater.

Upon entering the Old City,  Simon pointed out the el-Jazzar Mosque, the largest mosque in Israel outside Jerusalem. 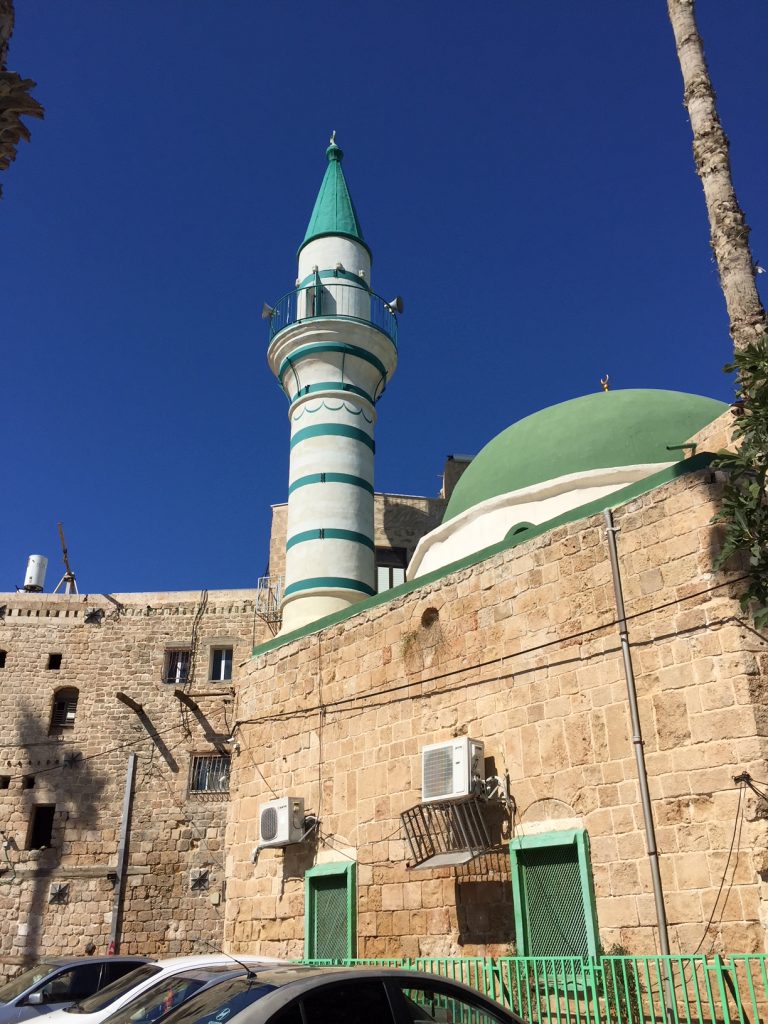 The el-Jazaar Mosque is one of the largest in Israel.

We passed The Turkish Bazaar and did a little shopping, before proceeding to the seashore area by the bay. 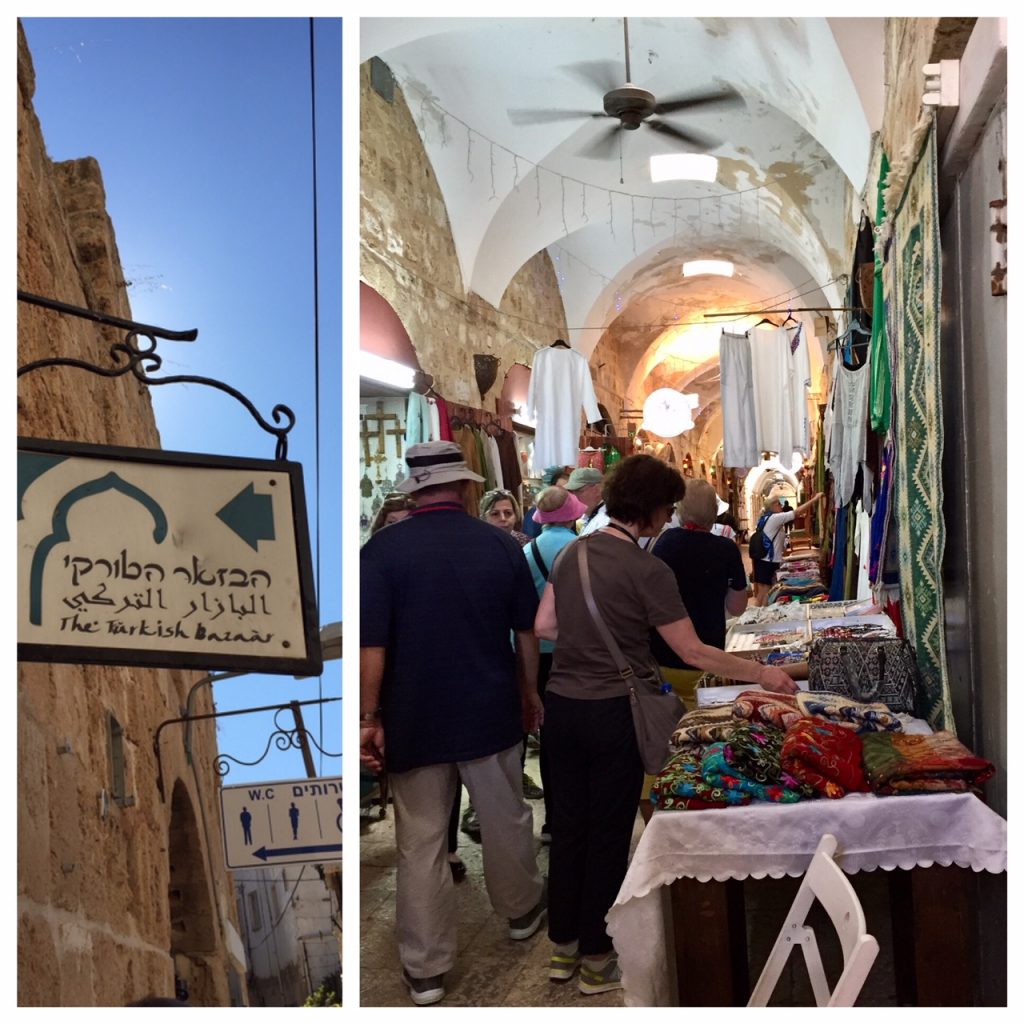 The Turkish Bazaar is an indoor market. 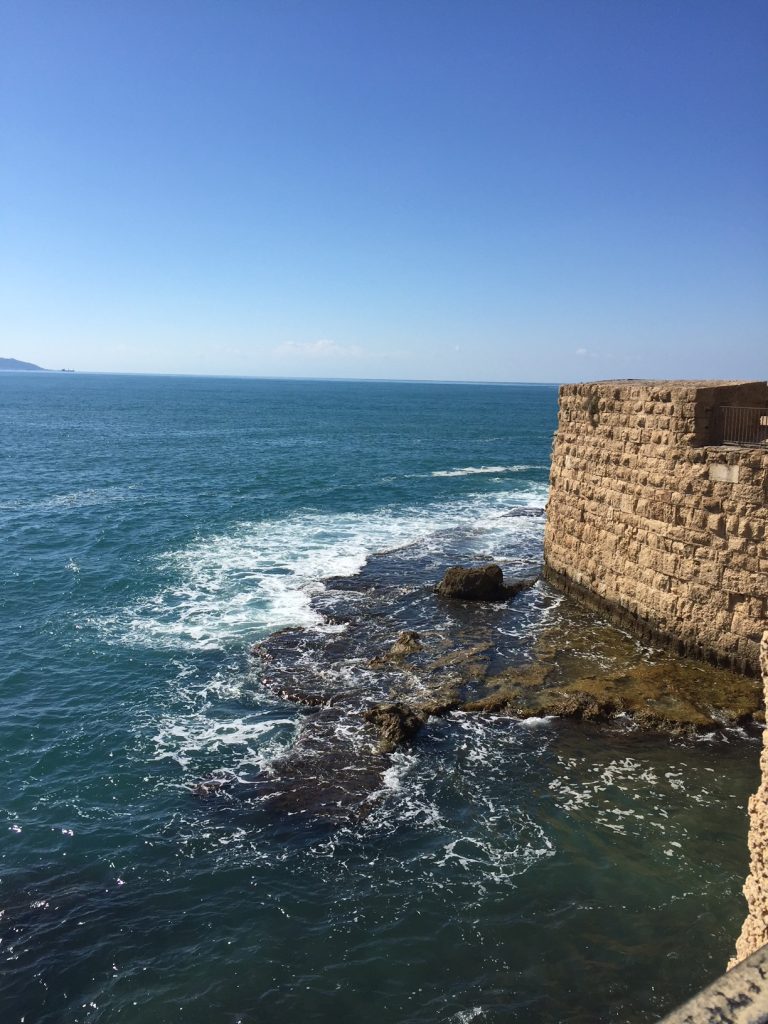 It’s beautiful by the turquoise harbor.

Then it was time to go below the city through Templars’ Tunnel, which originally served as a secret passageway for the Crusaders. We crouched down and tiptoed along the musty tunnel passageway, watching each step not to fall on the rocky path. The Tunnel extends 350 meters from the port to the Templar fortress. 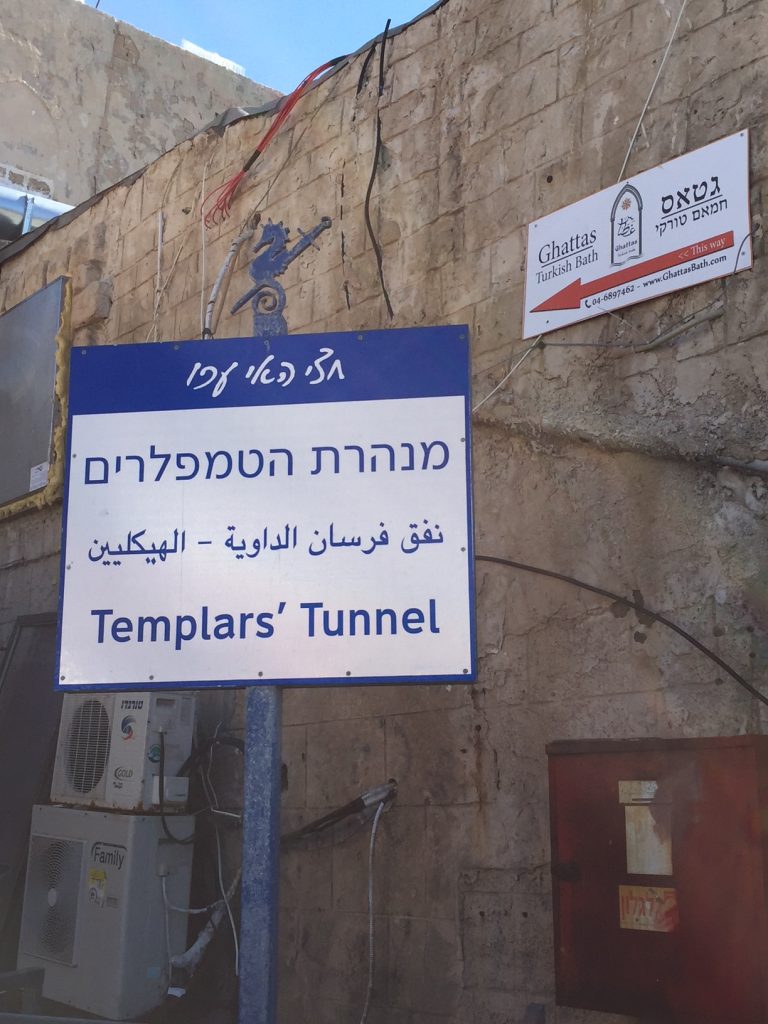 Signs in Israel are in Hebrew, Arabic and English.

Simon explained the different fortresses built at the time of the Crusaders. One was for the Templar order. The Templars were a monastic military order that guarded European pilgrims arriving in the Holy Land. The other was for the Hospitallers, established to treat the sick. 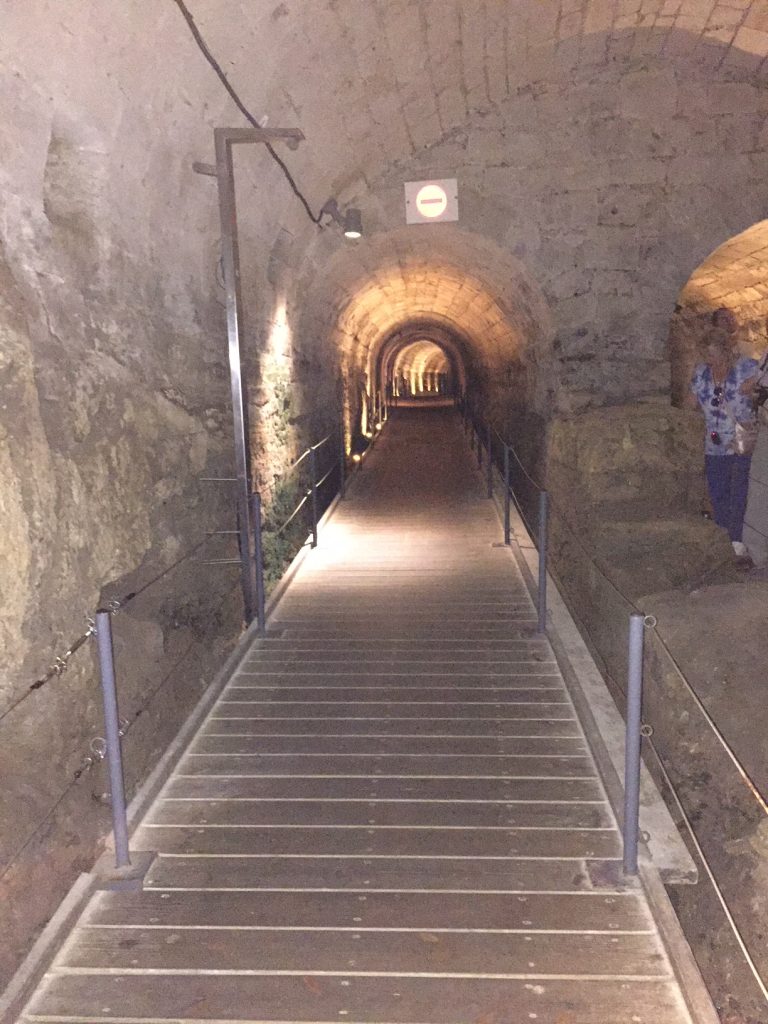 Going to the city underground.

“There is a suspicion that the ships smuggled their products onto the town so they didn’t have to pay tariffs. They hid the products underground,” Simon said. “The Templars were the bankers and held the money of the pilgrims. They became very rich.” 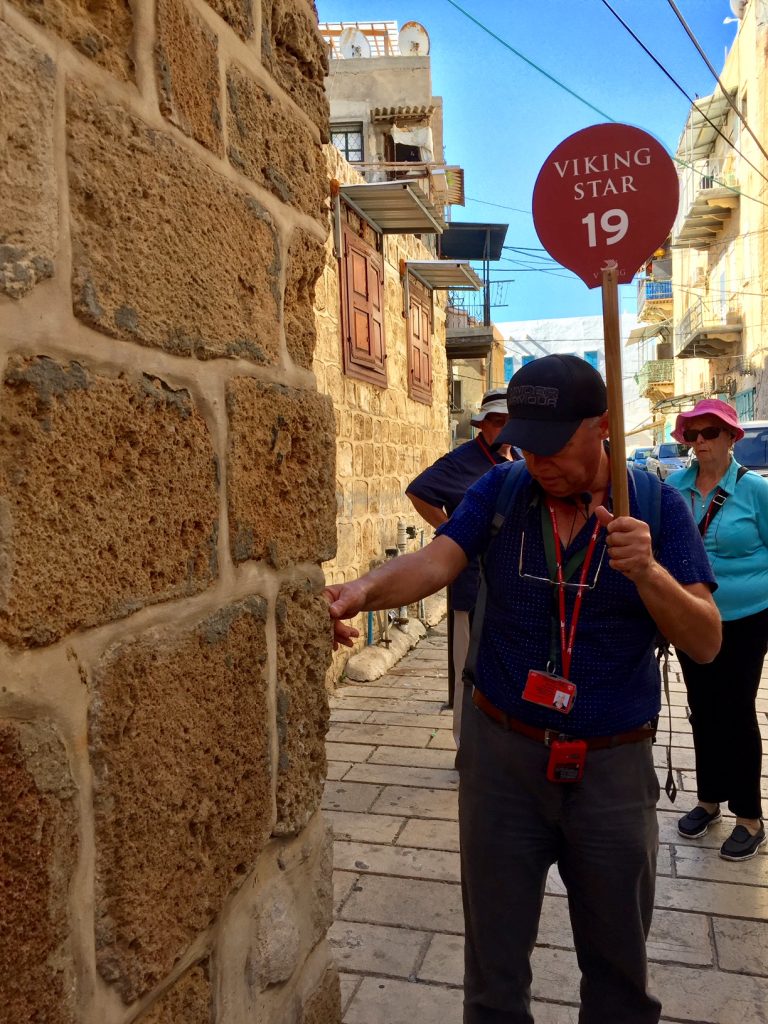 Simon pointed out the rocks made of sandstone. 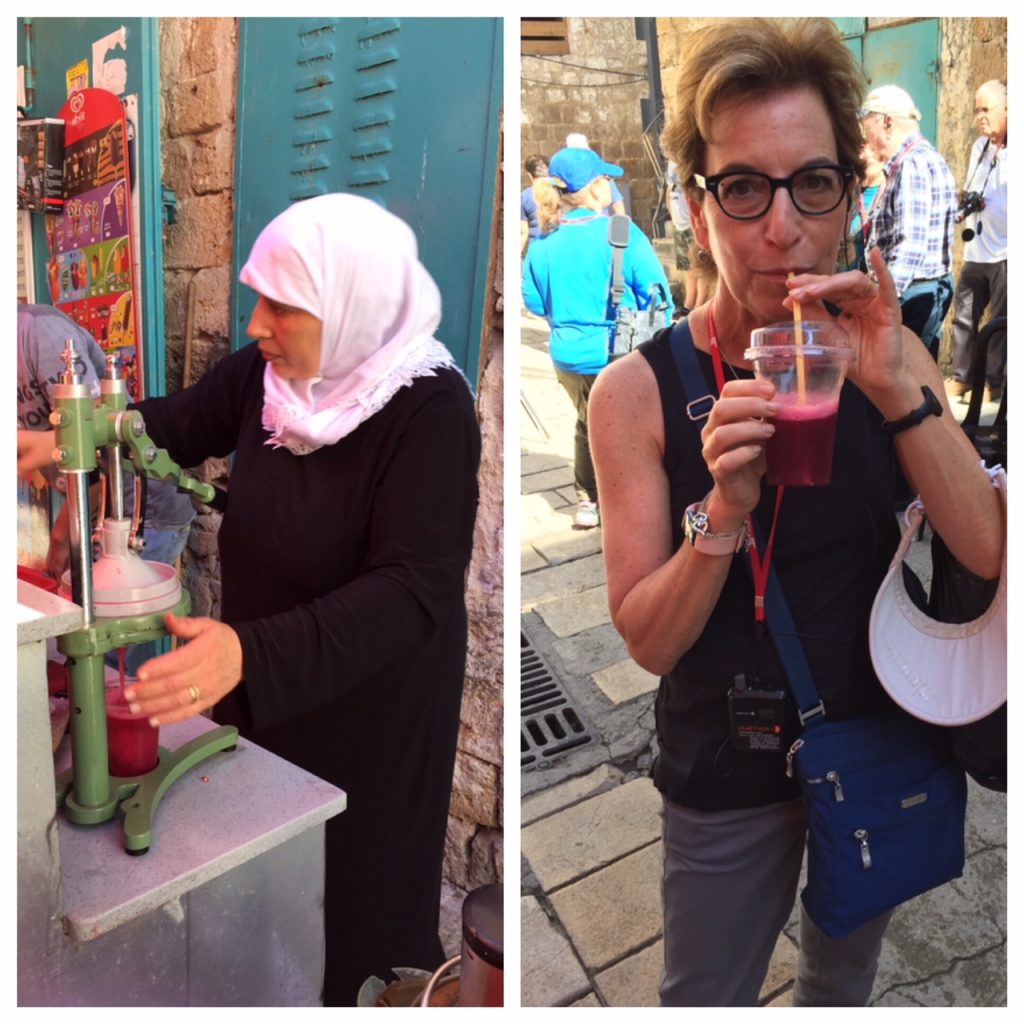 We stopped for a drink of freshly squeezed pomegranate juice.

My favorite part of the tour was Market Street, which was bustling with pre-Sabbath shoppers. It is the main street of Old City and runs from north to south. Supposedly during the Crusader Period this road led from the Hospitallers’ Gate in the north, along the route of the market to the port. 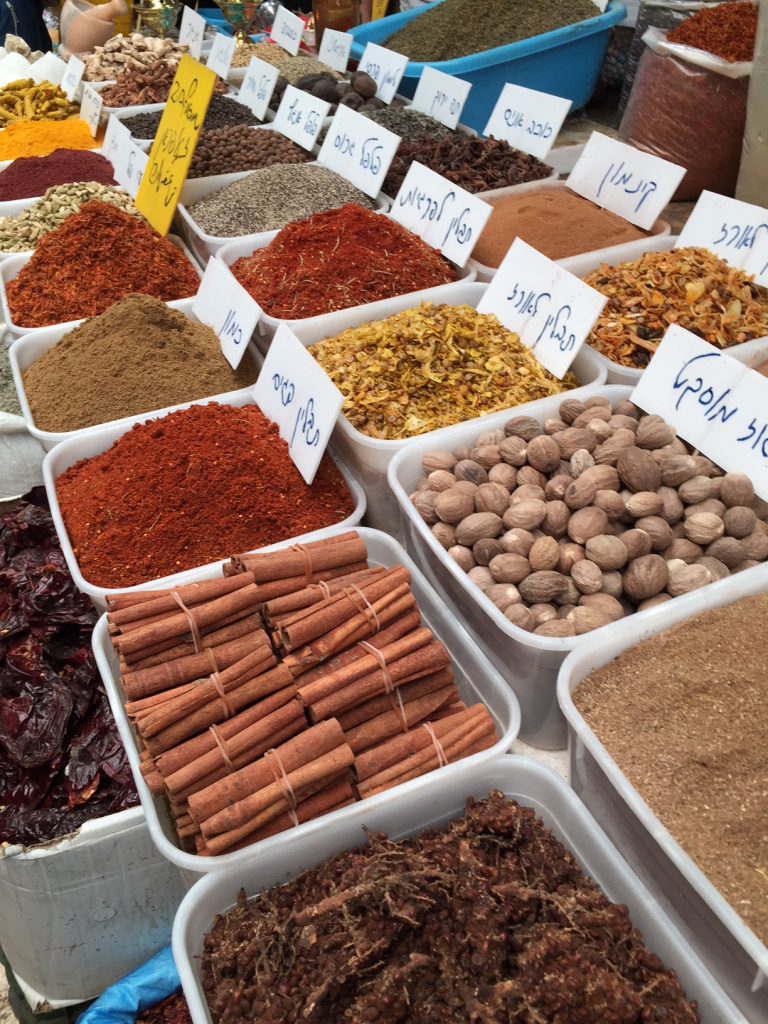 Market Street is a crowded thoroughfare with many stalls selling everything from fresh fish and vegetables, to sweet and savory pastries, to fragrant Middle Eastern spice blends and nuts, to homemade confections and more. 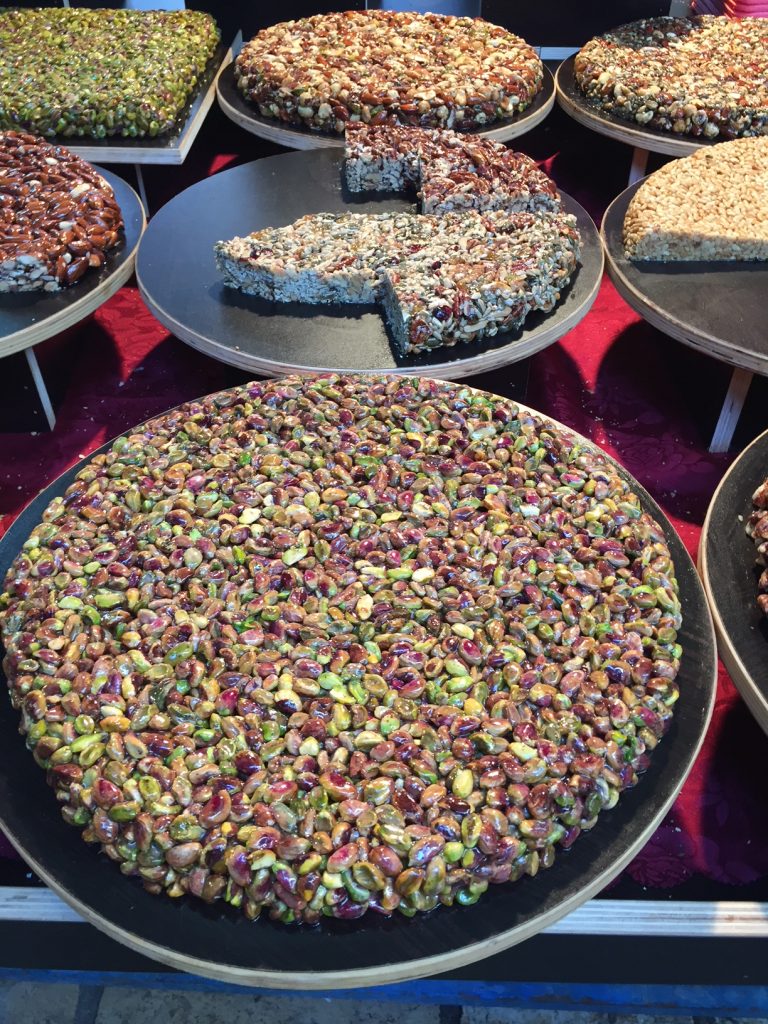 Sweet treats made with pistachios and other nuts are sold by the slice.

There were long lines outside the Humus Said hummus and falafel  shop. However, Simon recommended a different restaurant nearby Old City where he favors falafel. Unfortunately, there was no time to stop at either place this trip. “You know what that means,” I said to L.  “We’ll have to return some day.” 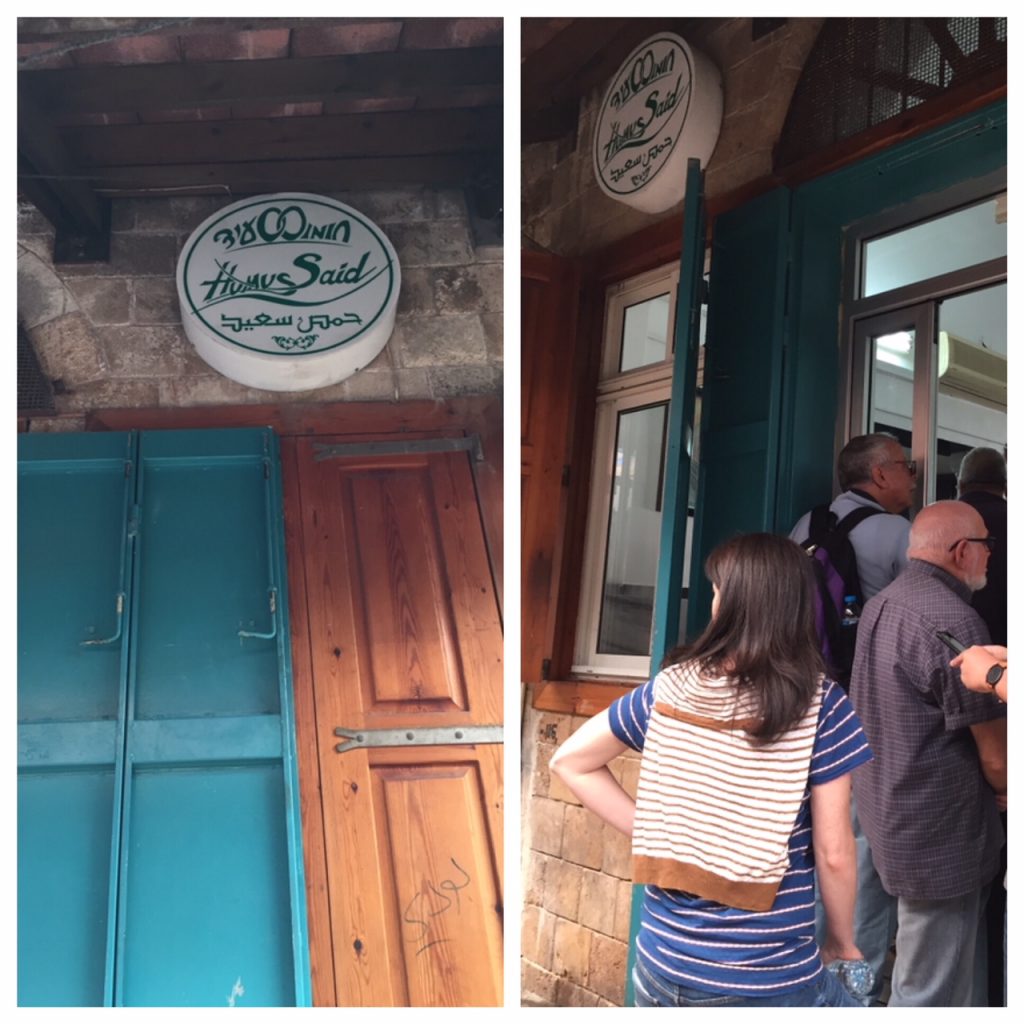 There was a long line outside the hummus restaurant.

Dinner On Board The Viking Star

To close out our stay in Israel, we decided to have dinner at The Restaurant on board. Each evening features a Destination Menu from the port of call. I ordered an Israeli Chopped Salad for my appetizer, opted for the Broiled Grouper Fillet entree from the main menu, and selected the Destination dessert of Olive Oil Cheesecake. It was so good, so good, so good, 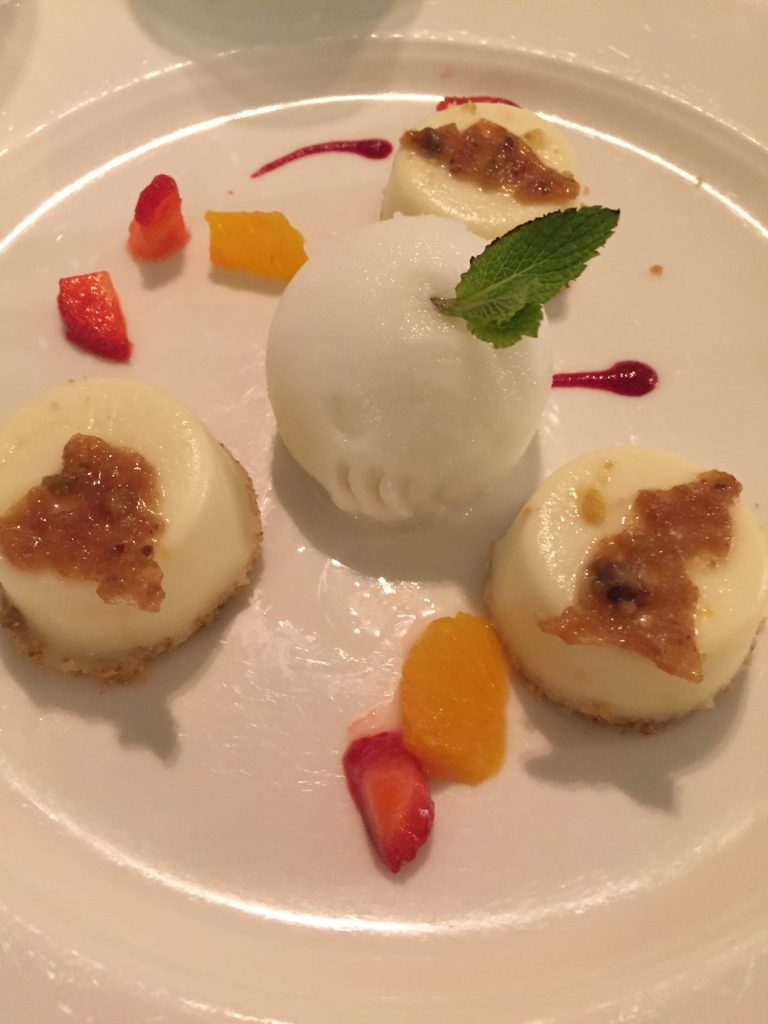 The next three days we would spend at sea, sailing to Italy. While high winds prevented us from stopping at the port of Crete. I found days at sea to be especially relaxing. You see, one of my requirements was to try out the LiV Nordic Spa. Ooh, ooh, ooh, how could I resist? 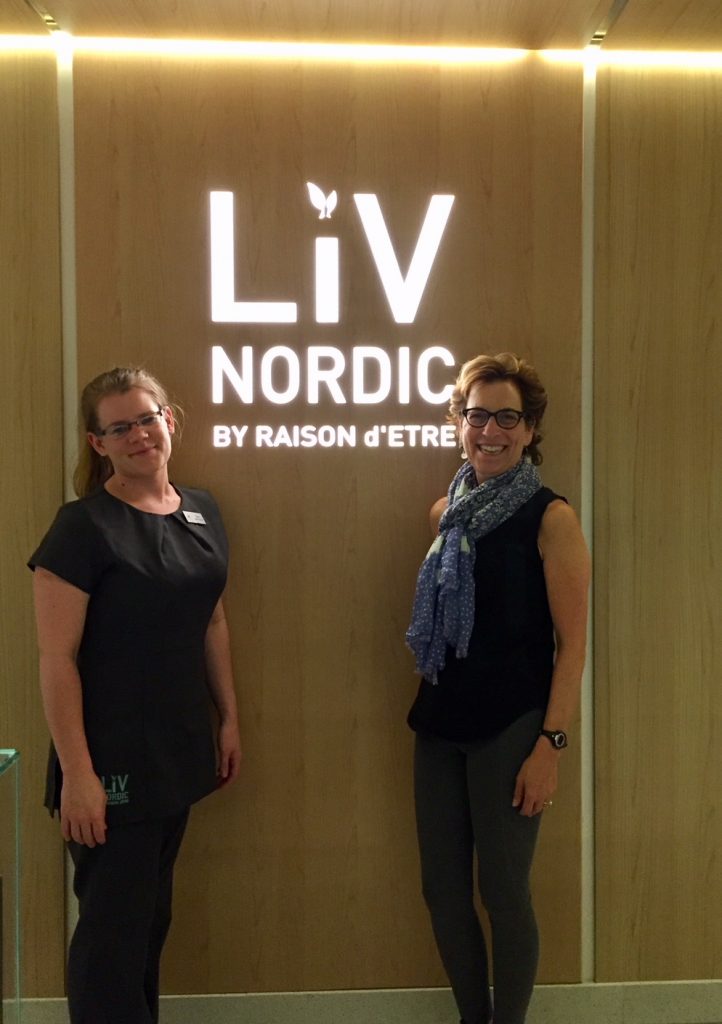 Shayle was the esthetician for my Nordic facial.

Stay tuned – I’ll share tips from my Swedish massage, Nordic facial, and skincare analysis. Plus, I’ll take you behind the scenes into the galley to share how Executive Chef Donald and team keep the kitchen running smoothly on this huge ocean liner. 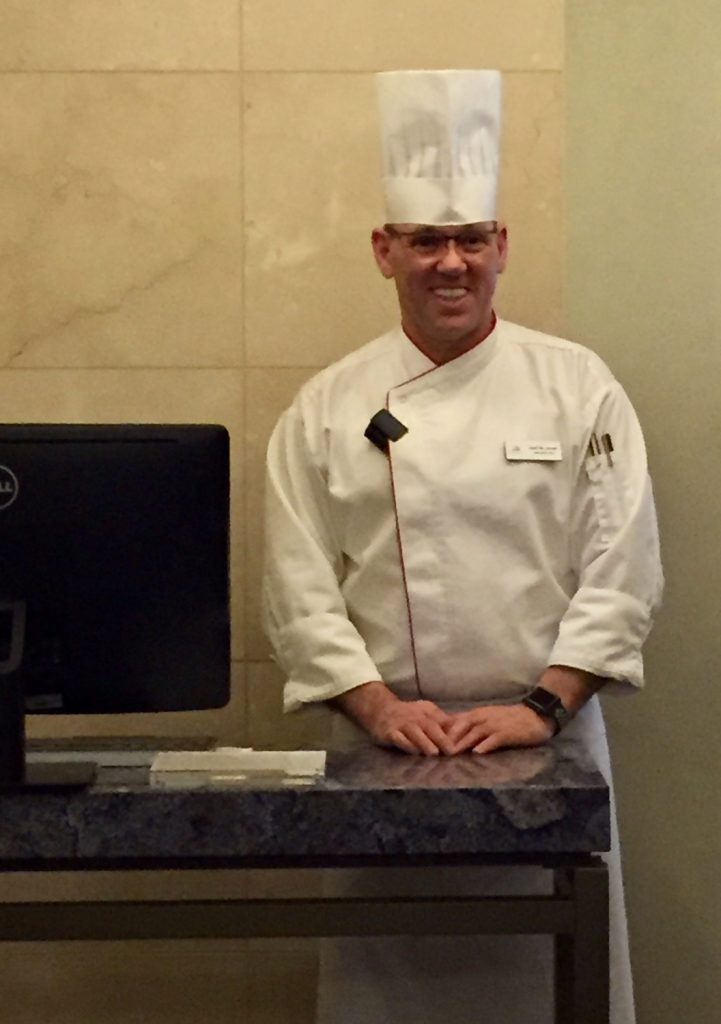 Executive Chef Donald runs the galley kitchens below the ship.

For now, shavua tov, which means “have a nice week” in Hebrew.