My Viking Journey: A Visit To Cyprus & The Goddess of Love 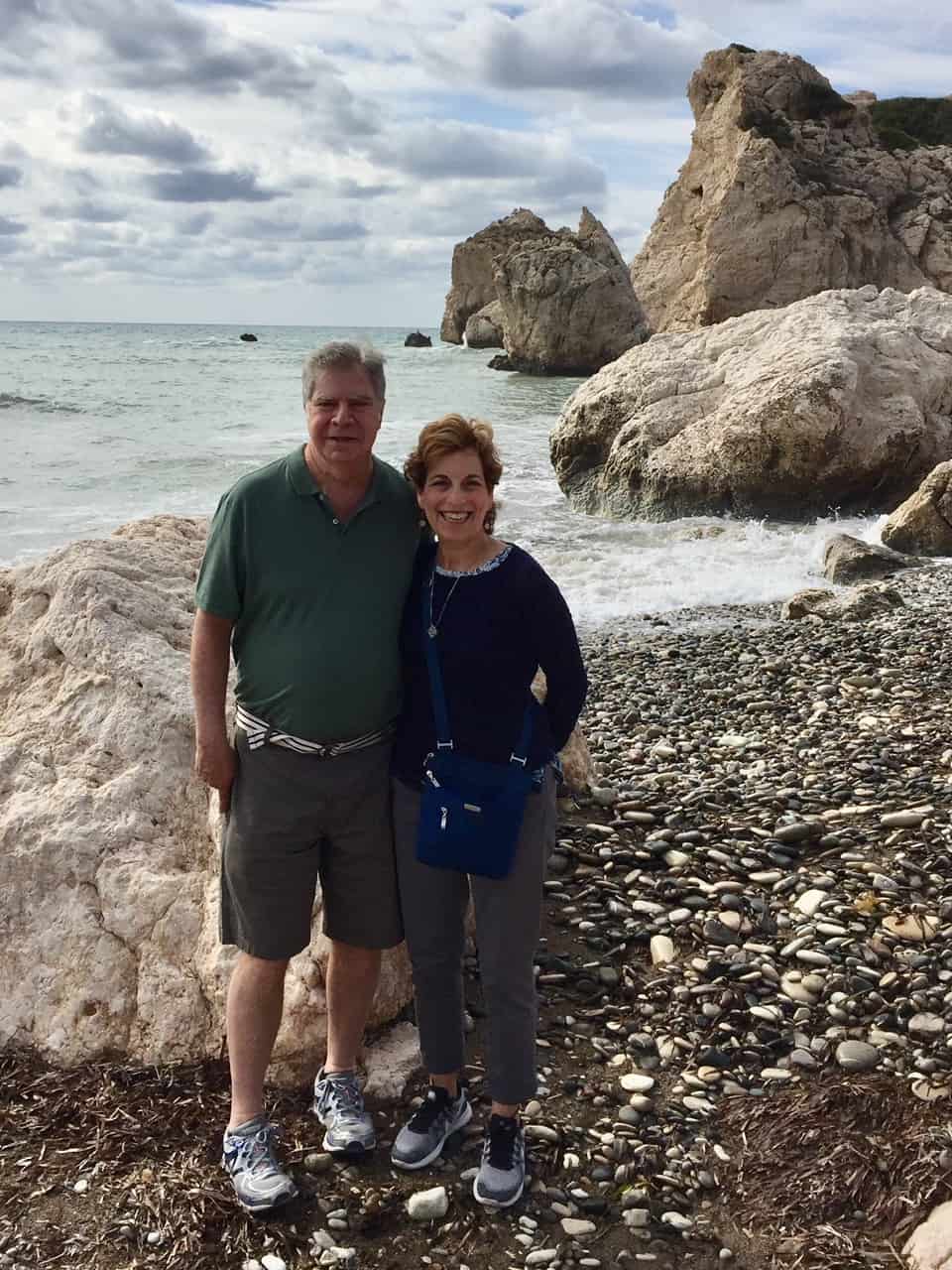 This week is Valentine’s Day, a perfect time to take you to Petra tou Romiou in Cyprus, also know as Aphrodite’s Rock, where legend says that the Cypriot goddess of love and beauty first stepped on land after waves carried her here. This destination was part of my Viking journey on the luxurious Viking Star ocean liner to the Cities of Antiquity & The Holy Land. My boyfriend L and I traveled courtesy of Viking Cruises.*

The Birthplace of Aphrodite

After leaving ports in Greece, we docked in Limassol, the historic capital of Cyprus. Cyprus is strategically located in the Eastern Mediterranean along the magnificent Aegean Sea. 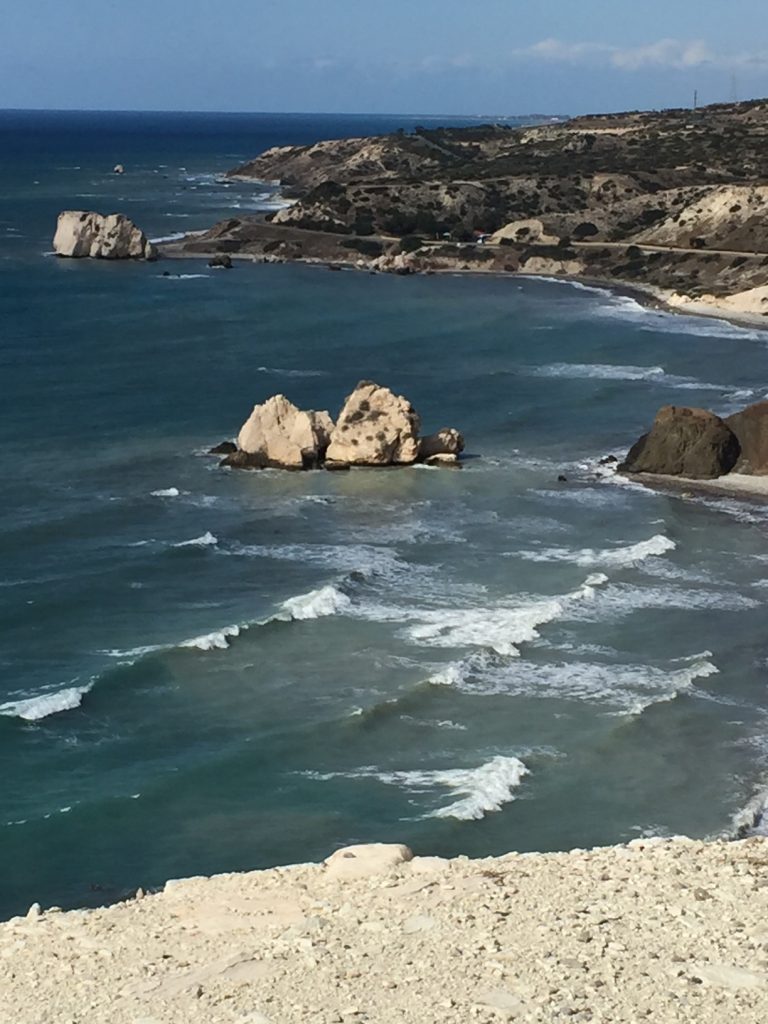 A higher view of the Cyprus coast

“We are driving to the birthplace of Aphrodite,” said our tour guide Irene as we neared Petra. “She rose out of the sea. She is the goddess of love and beauty.”

Aphrodite is the Greek goddess of love and beauty

We walked under the highway and ducked our heads to get through a narrow tunnel to see the geological formation of huge rocks that anchored the shore. The area is one of the most beautiful coastlines on the island. 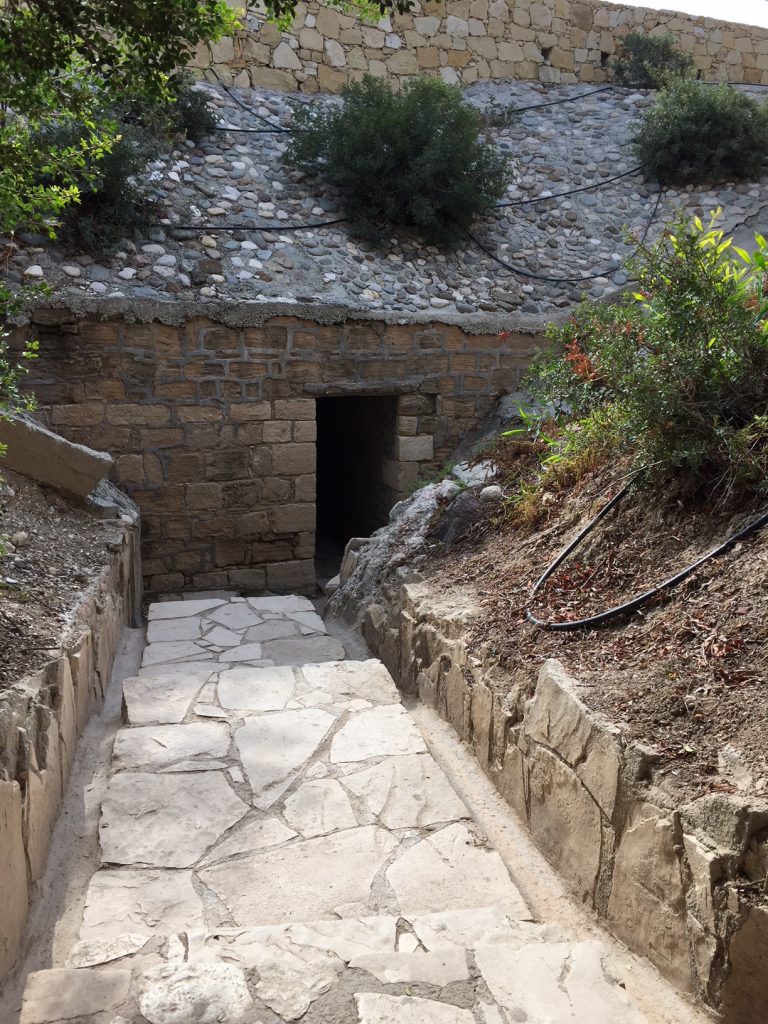 We walked under a tunnel to get to the beach

The Cyprus Tourism Organisation says “the Ancient Greek Goddess of Love and Beauty – Aphrodite – was born of the sea foam. Legend tells that she rose from the waves and was escorted on a shell to this particular beach.

It is said that in certain weather conditions, the waves rise, break and form a column of water that dissolves into a pillar of foam. With imagination, this momentarily looks like an ephemeral, evanescent human shape.” 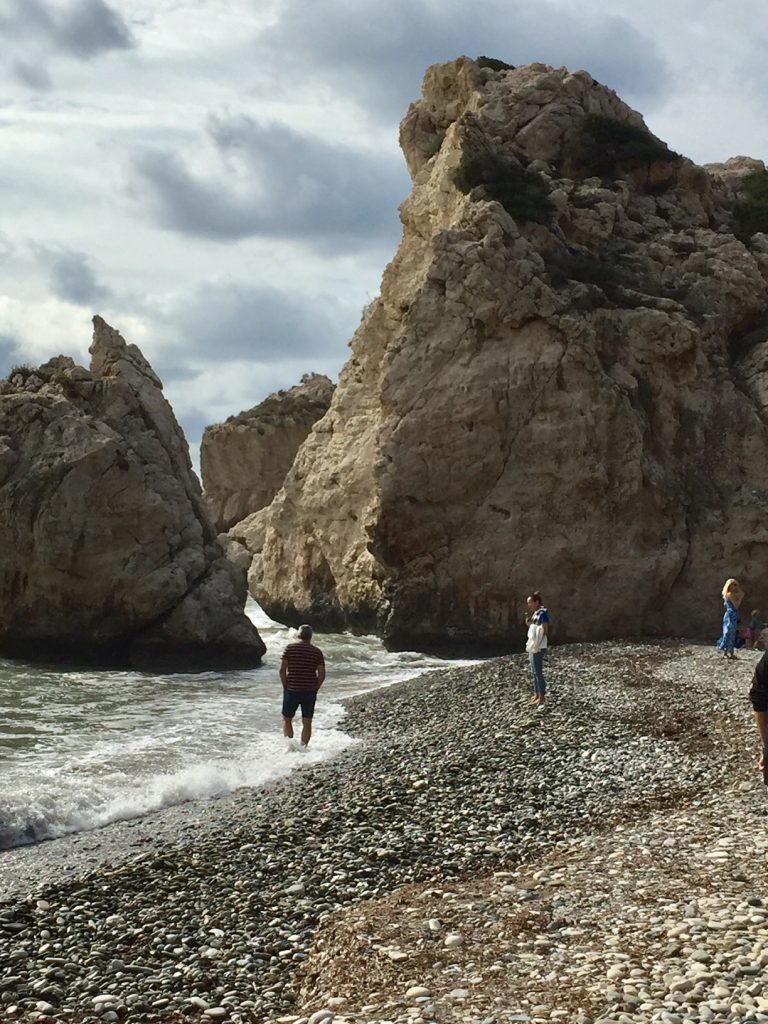 The beach is very rocky under foot

“Myths say that if a woman swims around the rock three times she will remain young and beautiful,” Irene said. “Legends also lament that Aphrodite turned one of her lovers into a seashell because she was angry with him.” I didn’t partake in the swim, so I hope I will still be able to age gracefully into my 60s. As for the shell change, go Aphrodite, you go girl! 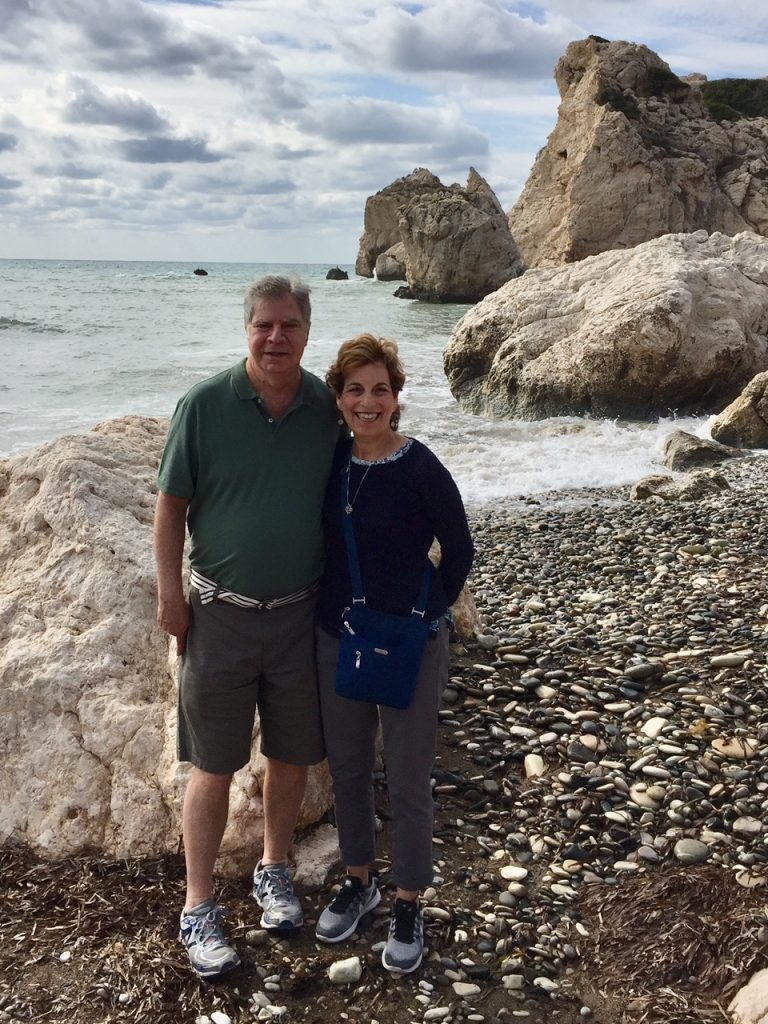 Will L and I remain together now that we have visited Aphrodite’s Rock?

The beach was extremely rocky under foot. Irene encouraged us to be careful as we walked and to inspect the rocks. “Legend has it that if you find a stone in the shape of a heart, you will remain in love forever.” Many of the rocks were quite smooth and oval. I collected a few to take home for my meditation practice. Holding a rock while meditating can provide strength and focus.

Unfortunately, L and I didn’t find any heart-shaped stones — ooh, ooh, ooh, hope that doesn’t mean that our love is in jeopardy. Don’t worry L, I will never turn you into a shell!

The Old Town of Limassol

Before reaching the Old Town of Limassol, we stopped at the 12th-century Kolossi Castle, build by the order of St. John of Jerusalem. It is three stories and remarkably well kept. 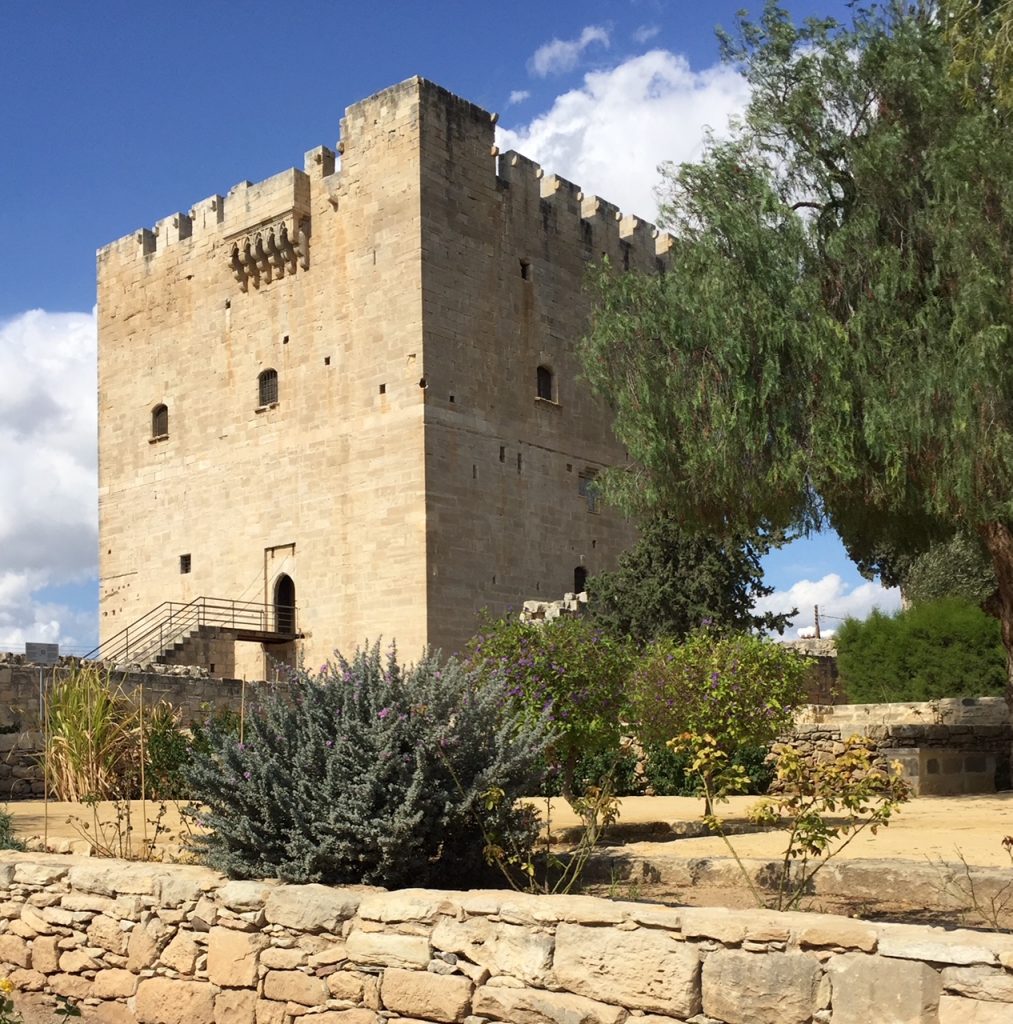 Irene shared the history of the island of Cyprus, dating back to 11,000 BC. She said that the island’s culture was influenced by a variety of rulers over many years including the Greeks, Phoenicians, Byzantines, Venetians, and British.

“We have very fertile ground,” Irene said. “Good for growing grapes and making wine, olives and olive oil, figs and strawberries, oranges, grapefruits and lemons too.” 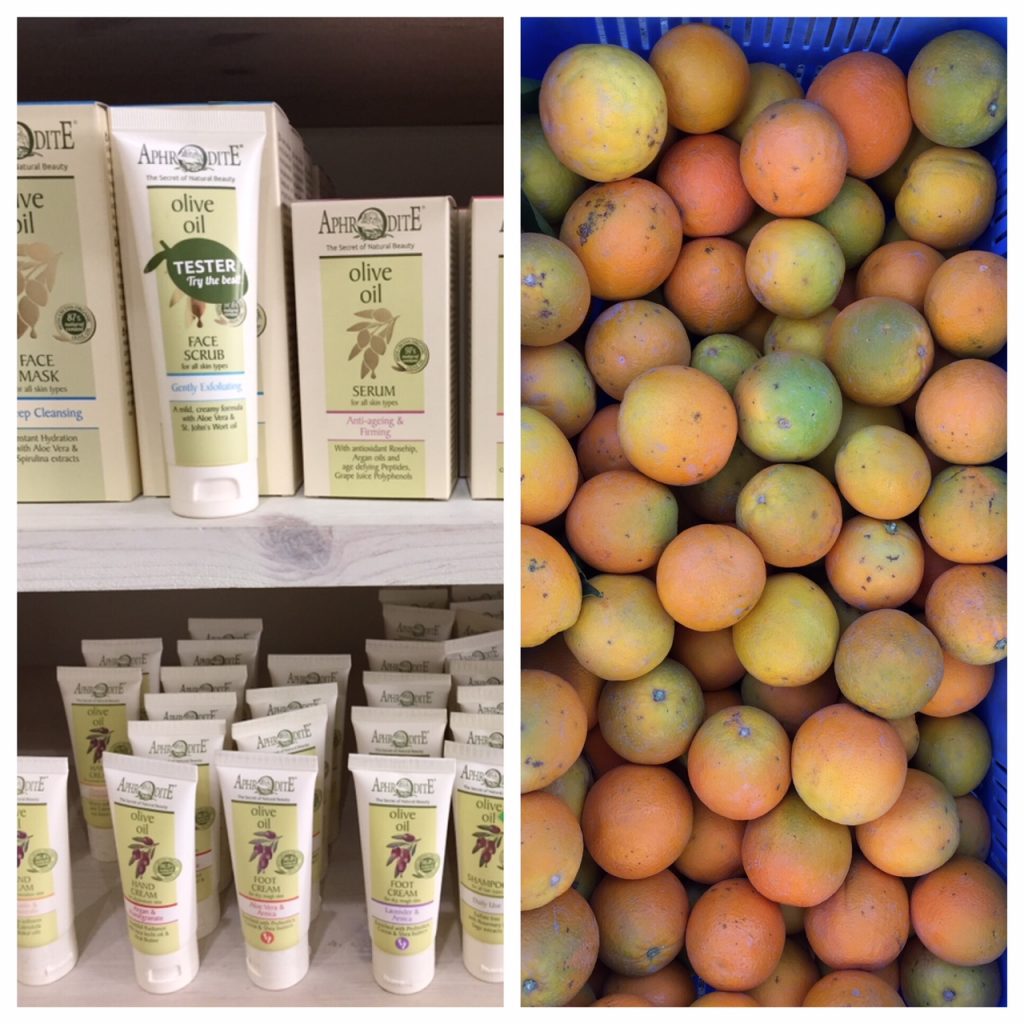 Olive oil products and oranges are two stables from Cyprus.

“Cyprus is the third largest island of the Mediterranean, with a population of 800,000,” Irene said. “A majority of the people are Greek and Turkish. A smaller minority are Russians and others are British and Armenian.” 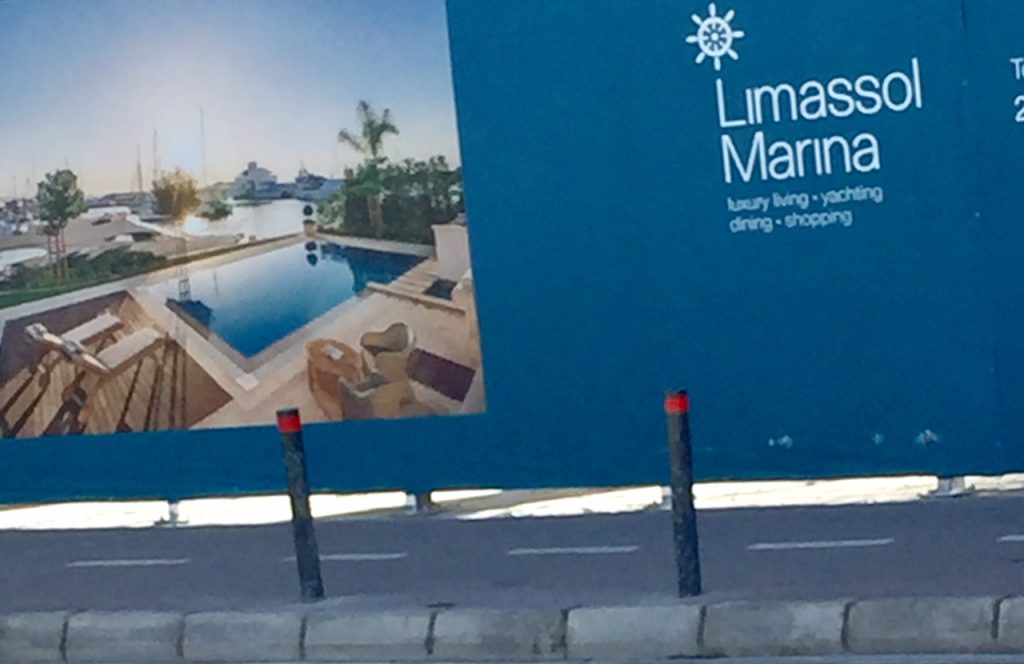 There is new construction along the Marina.

The Limassol Marina looked like it was under construction, with condos being built by the harbor. 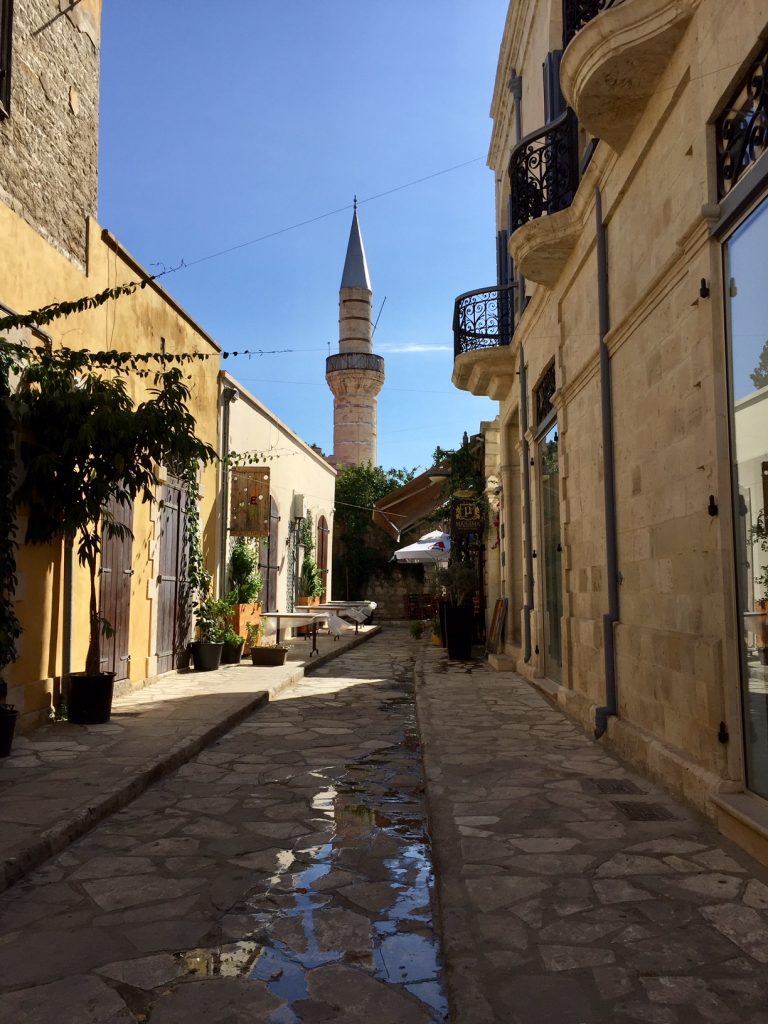 The Old Town of Limassol has winding streets.

We walked around Old Town, peeking in the windows and meandering through some of the shops. 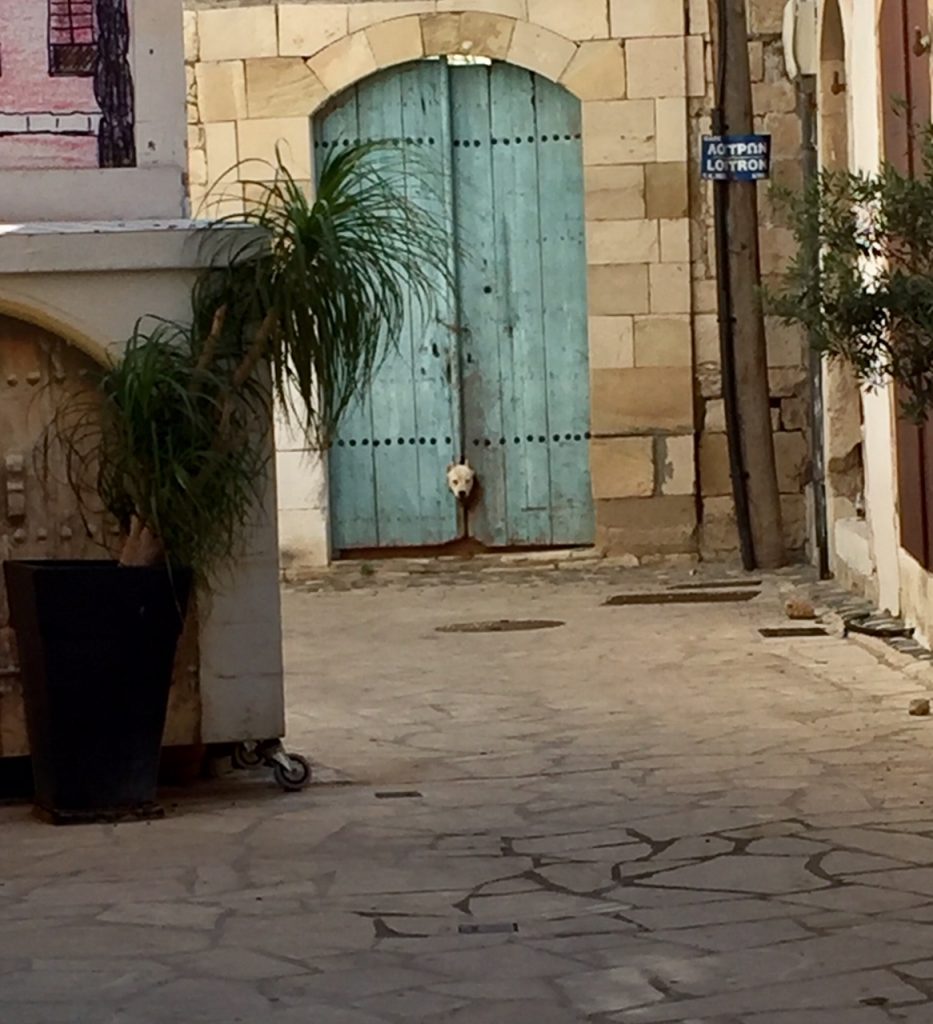 Dogs wander the streets of Old Town Limassol. Can you see the dog peeking out of the door? 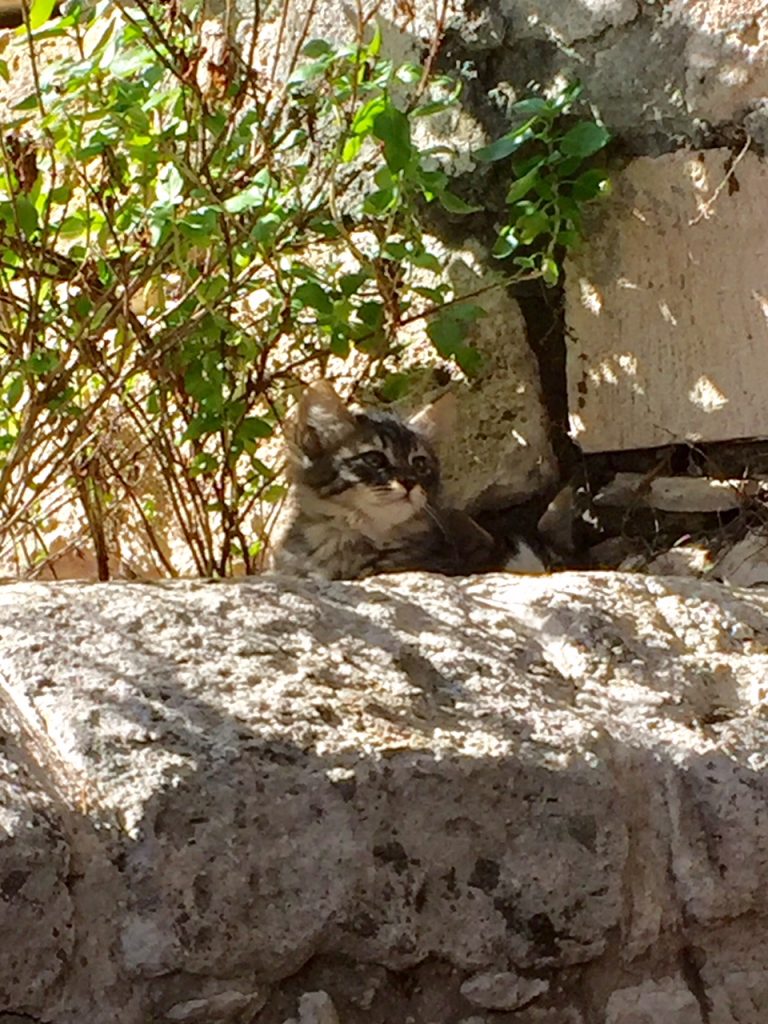 Cats also like to hang out around Old Town Limassol.

We stopped for lunch close to the center of town at Ousia cafe. It was a lovely place to sit outdoors and rest. L had a falafel and fatoush salad with tahini dressing and I had fried Haloumi cheese with a sesame salad. They served bread with tapenade to start. It was so good, so good, so good! 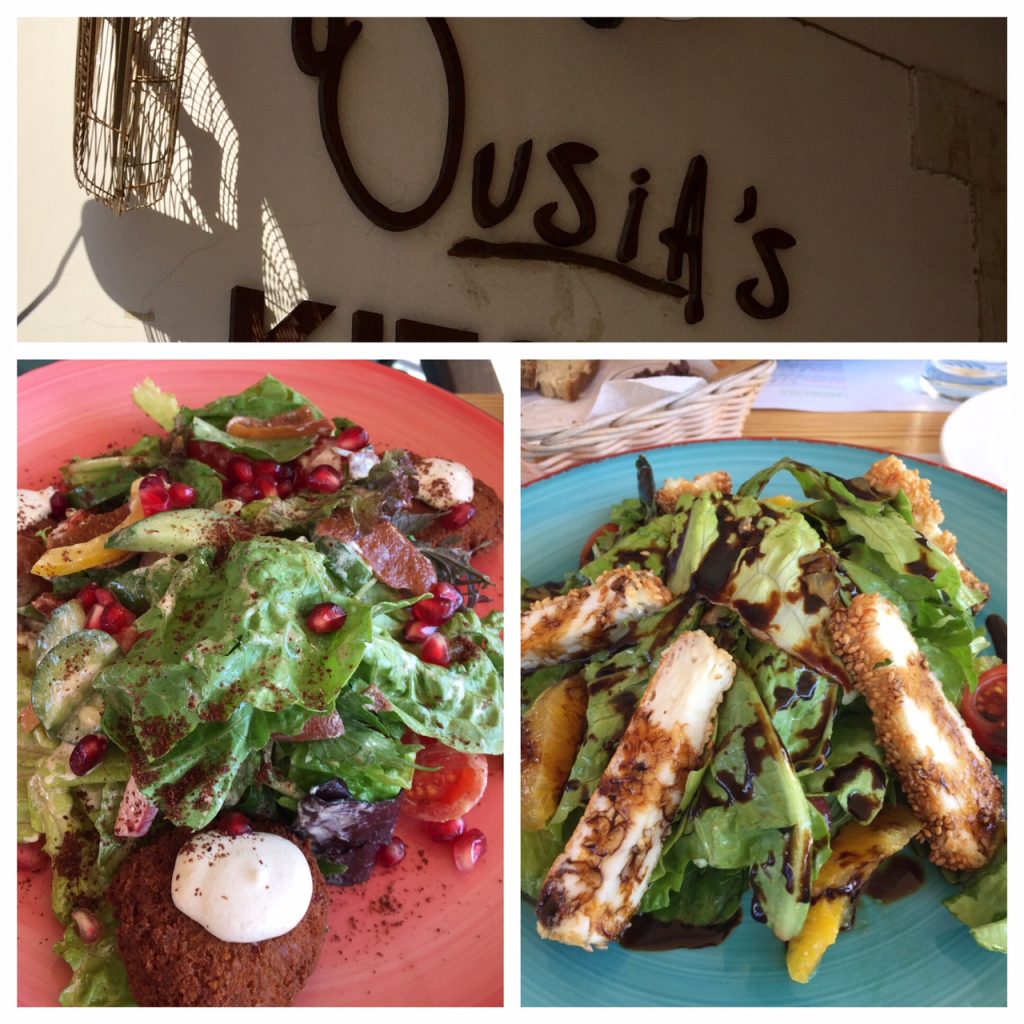 Traditional favorites for lunch include falafel and Haloumi cheese.

By 2:00 pm we were ready for our afternoon nap. We boarded the bus for a quick ride back to the Viking Star. That evening we selected the World Cafe for a buffet dinner. Each night they have a seafood feast of crabs legs, shrimp, sushi and sashimi, plus multiple entrees and desserts. We strolled around the ship and soon it was time for slumber. Tomorrow we would arrive in Israel. 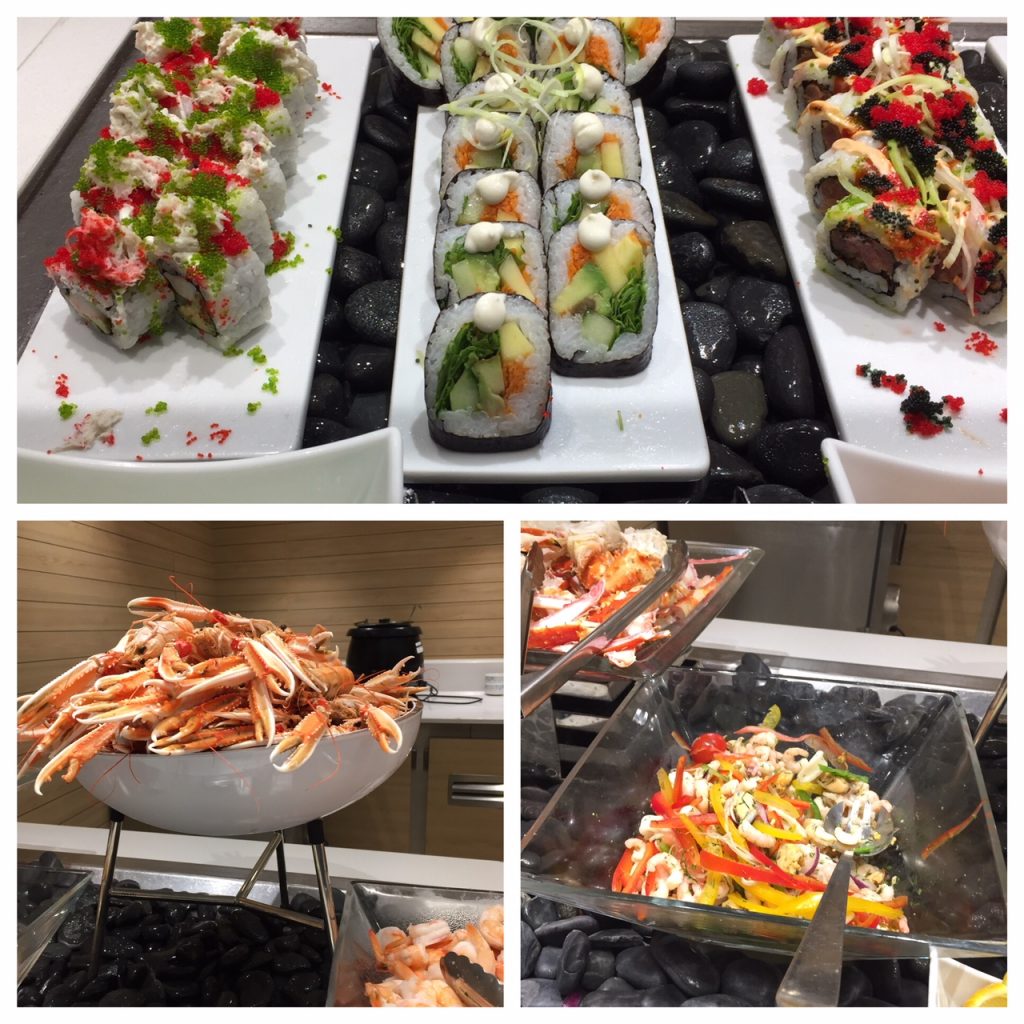 Every evening there is a seafood buffet in the World Cafe on Viking Star.

Meantime, for this Valentine’s Day week I leave you with words of wisdom I found on the walls of Ousia: 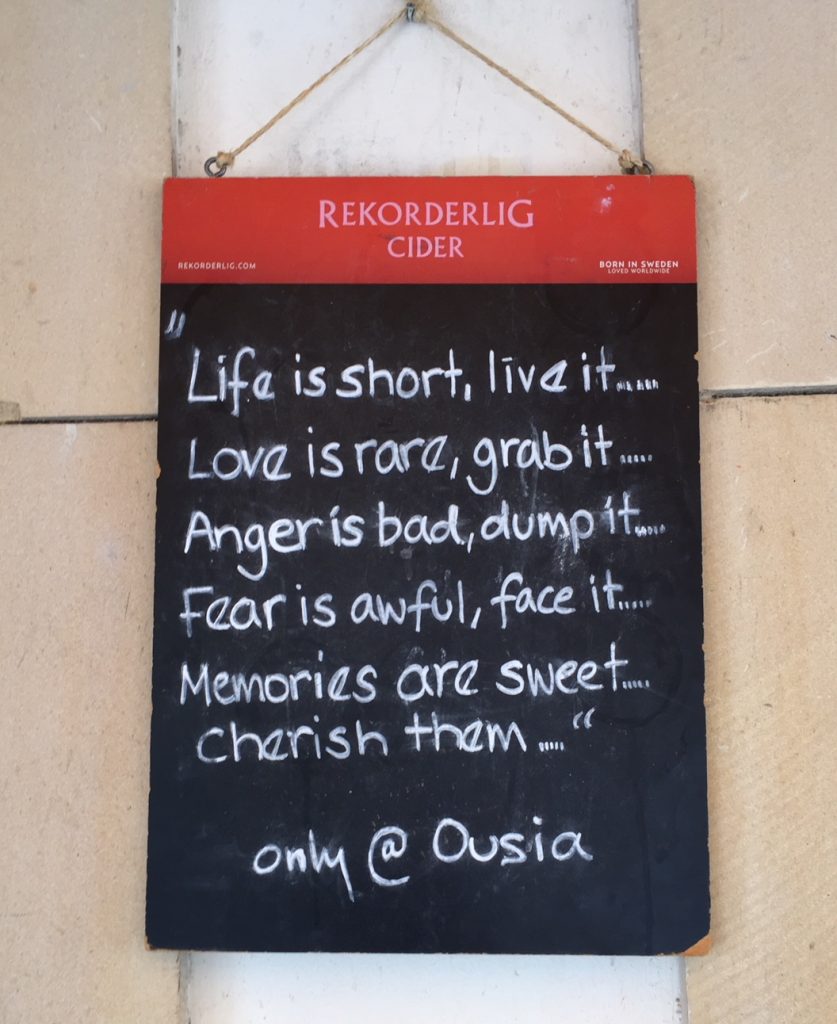 Words of wisdom on the wall of Ousia cafe.

Have a Happy Valentine’s Day!