My Viking Journey: A Day To Remember In Old Jerusalem 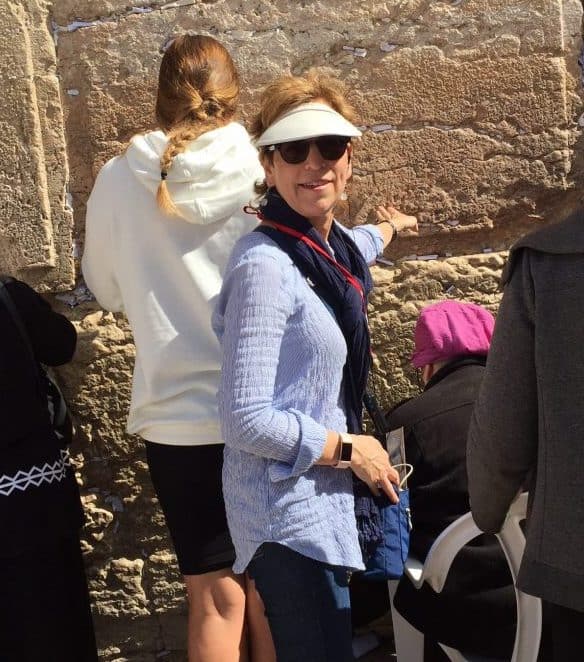 It was the seventh day of my Viking journey on the luxurious Viking Star ocean liner to the Cities of Antiquity & The Holy Land. We docked early morning in the port of Ashdod, Israel. My boyfriend L and I were traveling courtesy of Viking Cruises.* I had been happily anticipating this part of the trip and my first-ever visit to Israel. It would be a day to remember in Old Jerusalem.

“Welcome to Israel,” said our guide Isaac. “How many of you have been to Israel before?” he asked. Only one out of 35 guests in our group raised a hand. “We’ve been waiting for you for 70 years. Better late than never,” he added. 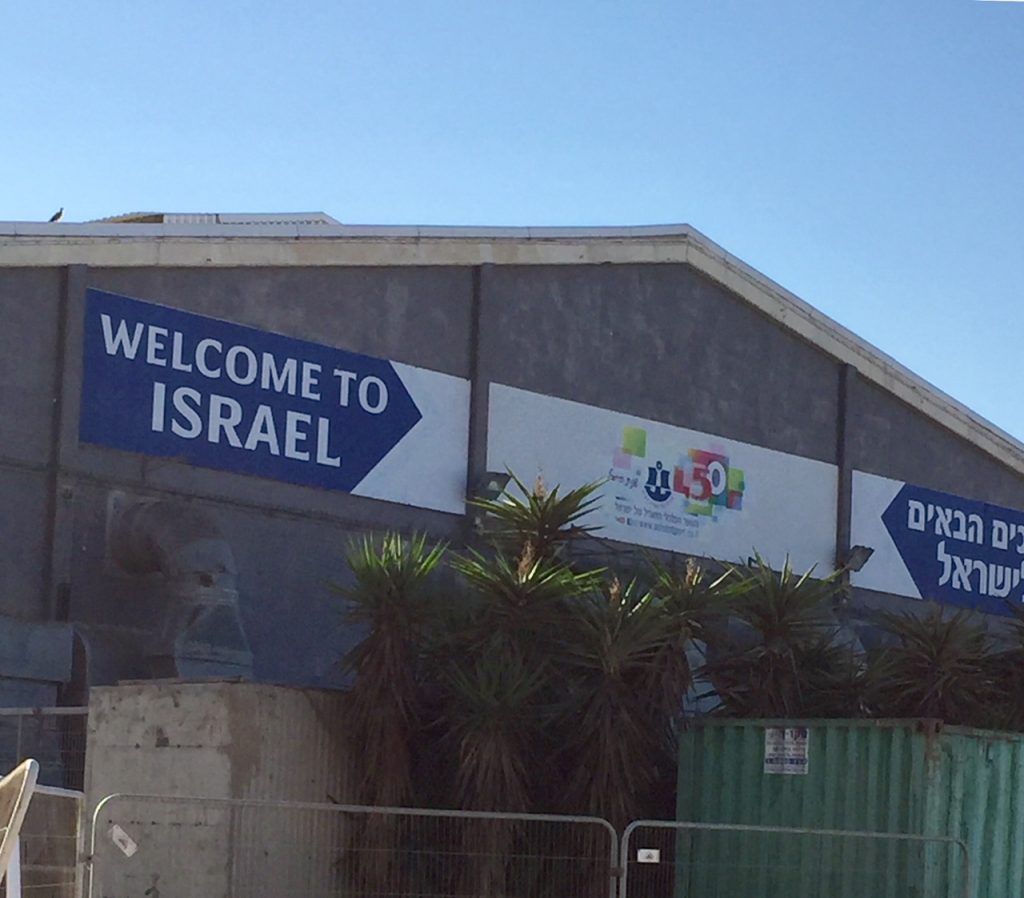 We arrived in Israel at the Ashdod port.

A Tiny But Mighty Country
I was amazed at how tiny Israel is. Isaac said the country is about the size of New Jersey, 350 miles north to south and 50 miles east to west. Wow-o-wow! “We are the only non-Muslim country in the region. We are surrounded by Muslim countries. That’s why we have such issues,” he said. Despite the ongoing friction around the edges, I felt safe during our excursion. 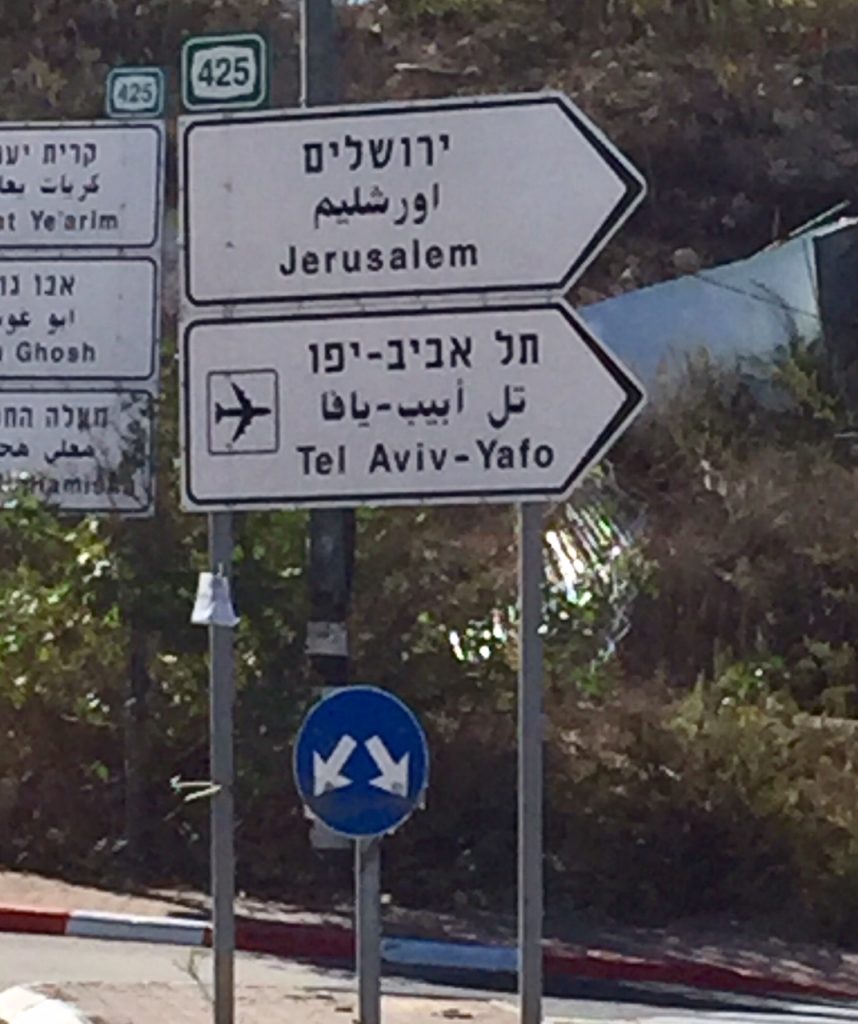 On our way to Jerusalem.

Isaac told us about the population of Israel. “We have 8.5 million inhabitants. Eighty percent are Jewish. A majority of the remaining 20 percent are Arabic.”

We learned about Israel’s vibrant agriculture with olive trees, fresh fruits and vegetables. He especially encouraged us to try Israeli peppers and eggplants.

We learned about the country’s terrain: to the west is the coast of the country, in the middle the mountains of Judea and the Negev, the Jordan Valley to the east, the Sea of Galilee in the north and Dead Sea in the south. (I didn’t get a chance to swim in the Dead Sea, which is 34 percent salt! Definitely have to plan another visit to Israel.) 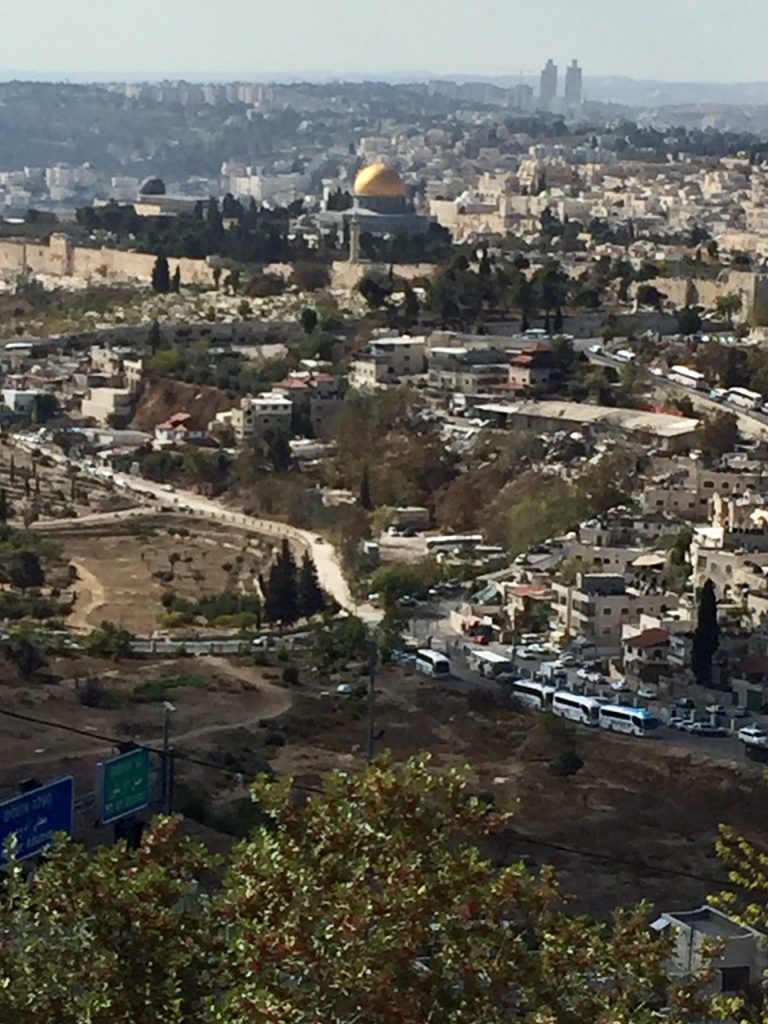 A panorama view leading into the Holy City.

Learning The History of The Holy City
After our scenic drive across Israel’s lowlands and into the Judea mountains, we entered the Holy City. It was an amazing feeling to walk around in the Old City of Jerusalem, one of the oldest cities in the world and a pilgrimage site for major world religions. 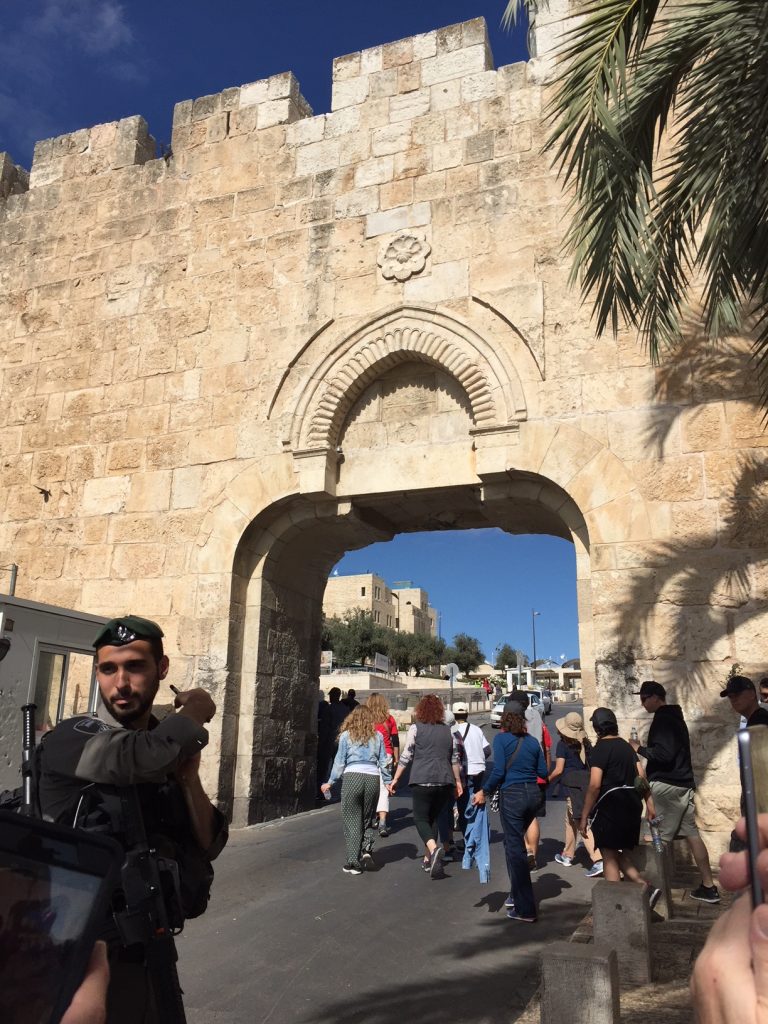 Entering the Holy City in Jerusalem.

Isaac provided a history lesson dating back to 1010BC when King David became the ruler of the kingdom and established the capital of Jerusalem as the Jewish State. It was challenging to keep track of the different peoples who have fought for and ruled the area both BC and AD, including Canaanite, Babylonian, Assyrian, Judea, Roman, Persian, Byzantine, Umayyad, Ottoman, British, Jordanian, Palestinian and many others. This history offers some understanding as to why there is such strife today among neighboring territories and religions. In fact, I was surprised to learn that Jerusalem is the third holiest place for the Islamic religion. 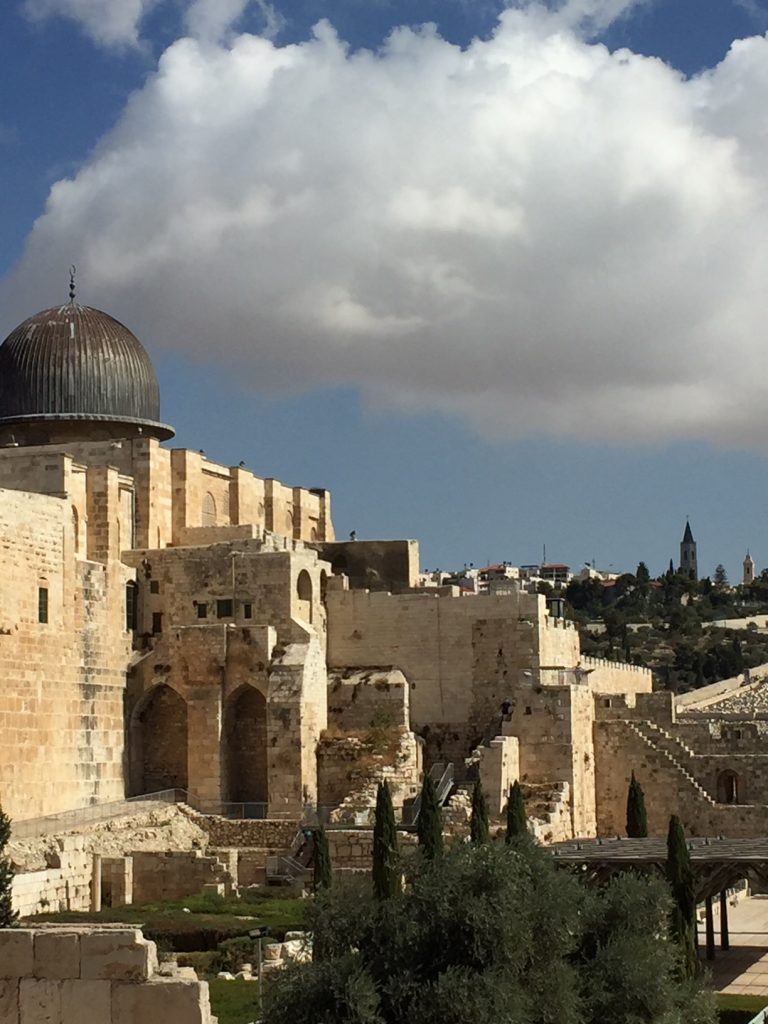 We stopped to view the Temple Mount before moving into the Quarters of Old Jerusalem.

Praying At The Western Wall
Our first stop was the Western Wall, with its esteemed plaza where Jews gather to mourn the destruction of their Second Temple by the Romans in 70 AD. The wall is divided for men and women to pray separately. You must cover your arms, legs and head to enter – no sleeveless tops or shorts. Placing notes in between the stones or just touching the wall is said to bring luck to those who pray. 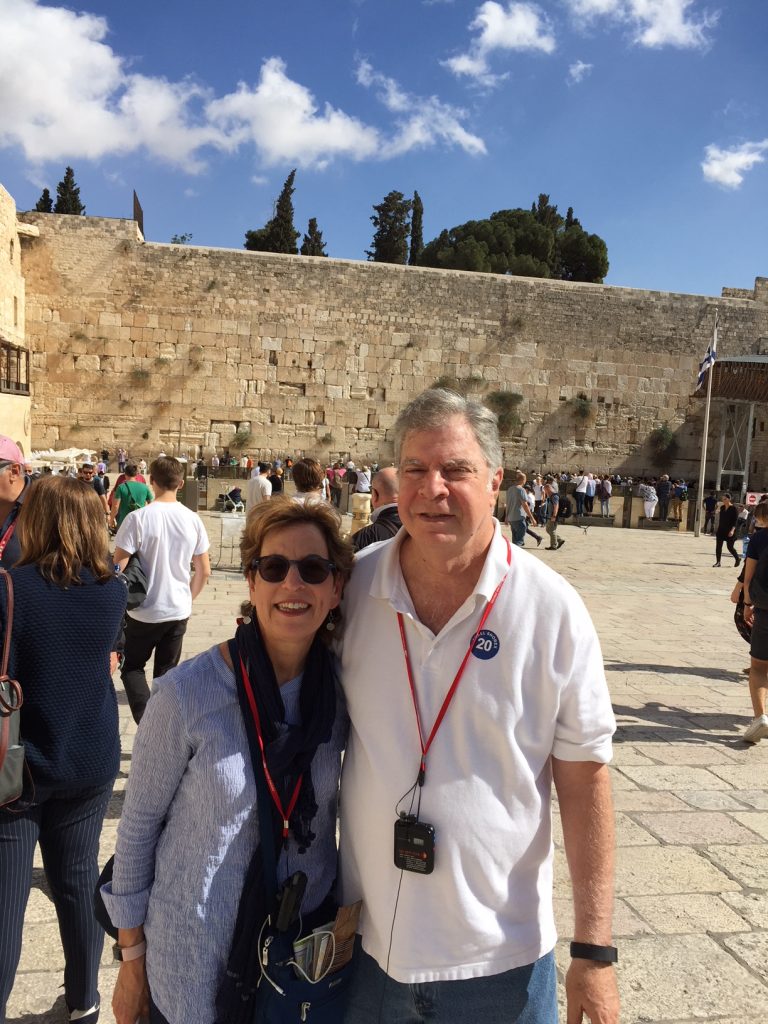 It was the first time L and I visited Israel.

The Western Wall Heritage Foundation says: “All stand equal in front of the Wall. Jews sense their Judaism, often for the first time. Touching its stones links us with our nation and heritage, with the Jewish people and our long, turbulent history. Standing at the Wall, perspectives, thoughts and feelings crystallize and the insignificant fades away.” 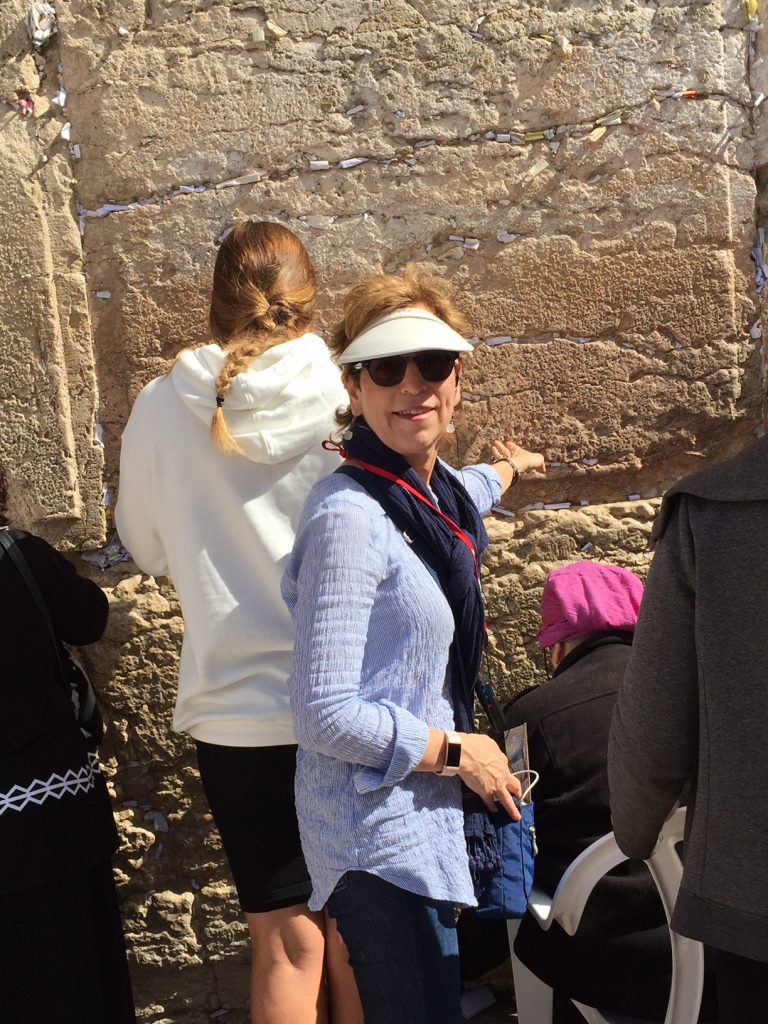 Praying at the Western Wall was a very emotional experience.

It was a memorable moment standing before the Western Wall. I touched a stone, put a note in the wall, and prayed for my health and the well being of my family and friends.

Walking the Quarters of Old Jerusalem
Before leaving the plaza, we viewed the Temple Mount, sacred to Muslims as the site where Mohammed ascended to heaven. We continued to the Via Dolorosa, the road Jesus walked while bearing the cross. We walked through the Jewish, Islamic, Christian and Armenian quarters. Each quarter has open-air markets brimming with carpets, fabric, jewelry and regional goods lining the streets. 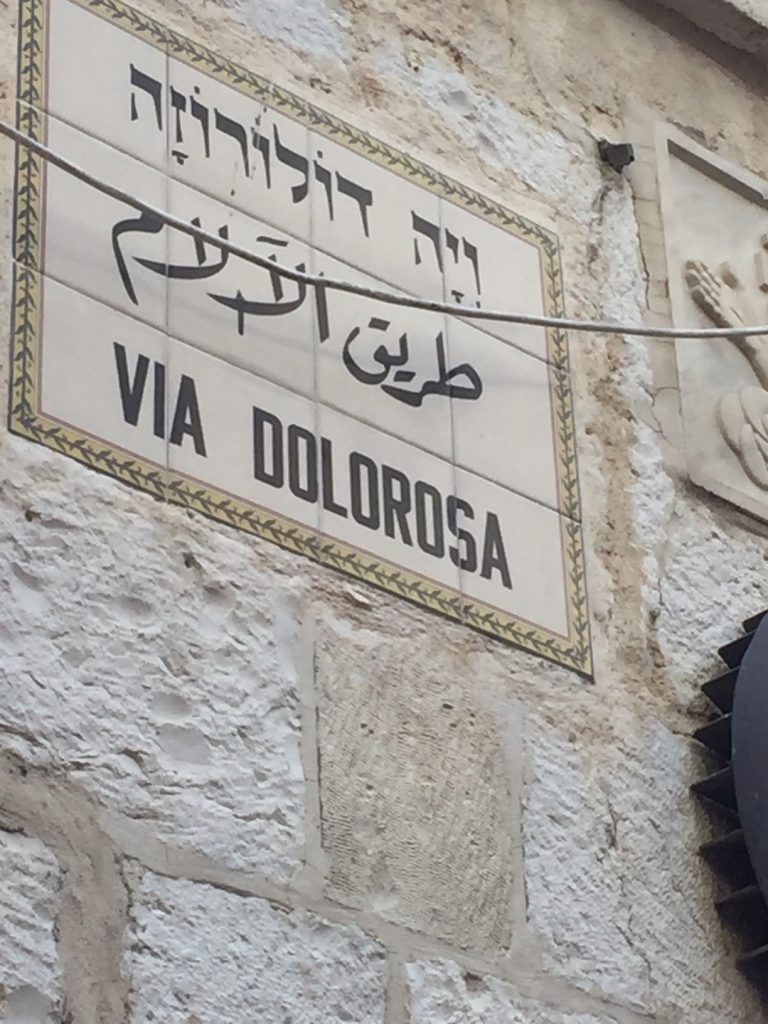 We followed the route Jesus walked. All signs are in Hebrew, Arabic and English. 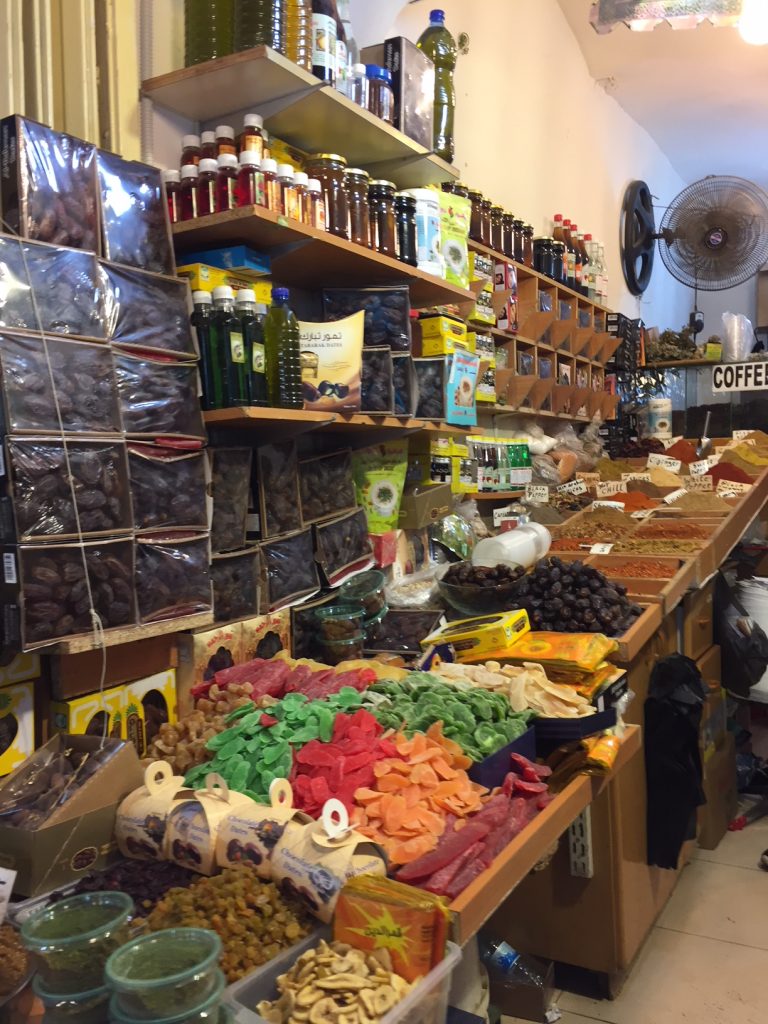 The street markets are filled with regional foods and spices. 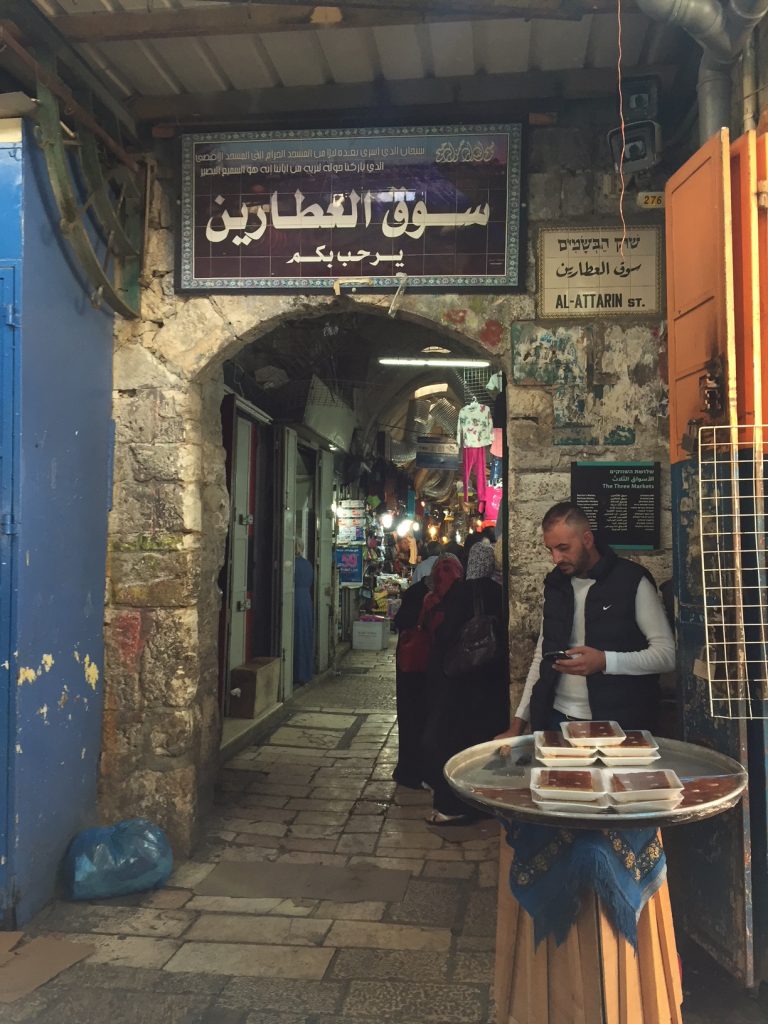 We walked through the Arabic market.

“We’re in Old Jerusalem,” I said to L. “We have to try an authentic falafel from a local cart.” While others in our group went jewelry shopping, we inhaled all the ethnic foods and spices permeating the air and and snacked on a rather large piece of falafel. It was so good, so good, so good! 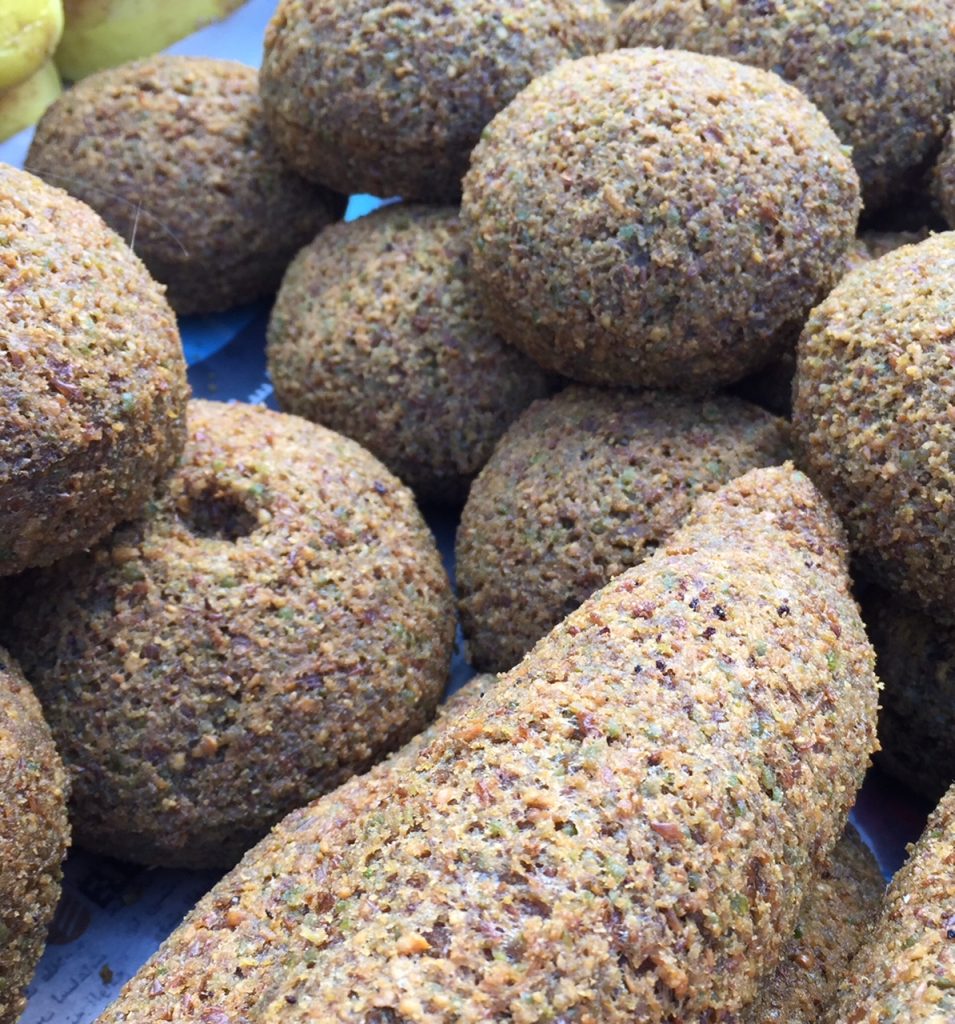 Falafel vendors line the streets of the Old City.

We followed the route to the Church of the Holy Sepulchre, the site of Christ’s crucifixion, entombment and resurrection. I could see why Jerusalem is also the center of the world of Christianity. Every holy site is marked with the Jerusalem cross and each station tells a specific part of Jesus’ story. 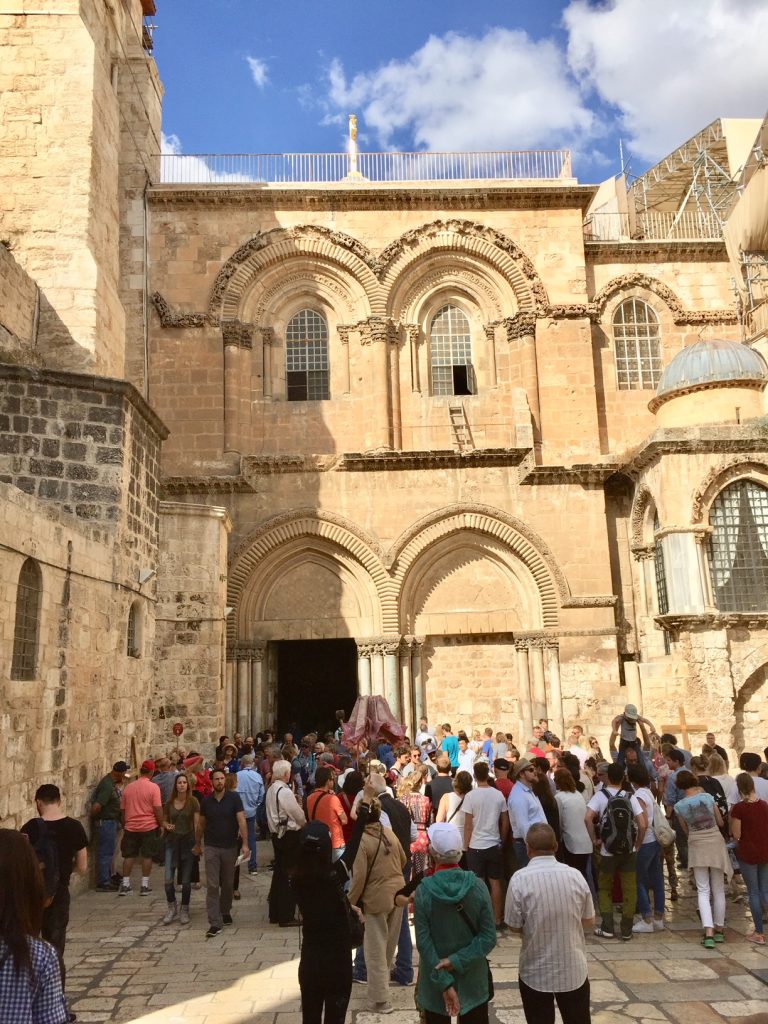 Church of the Holy Sepulchre is said to be where Christ is buried. 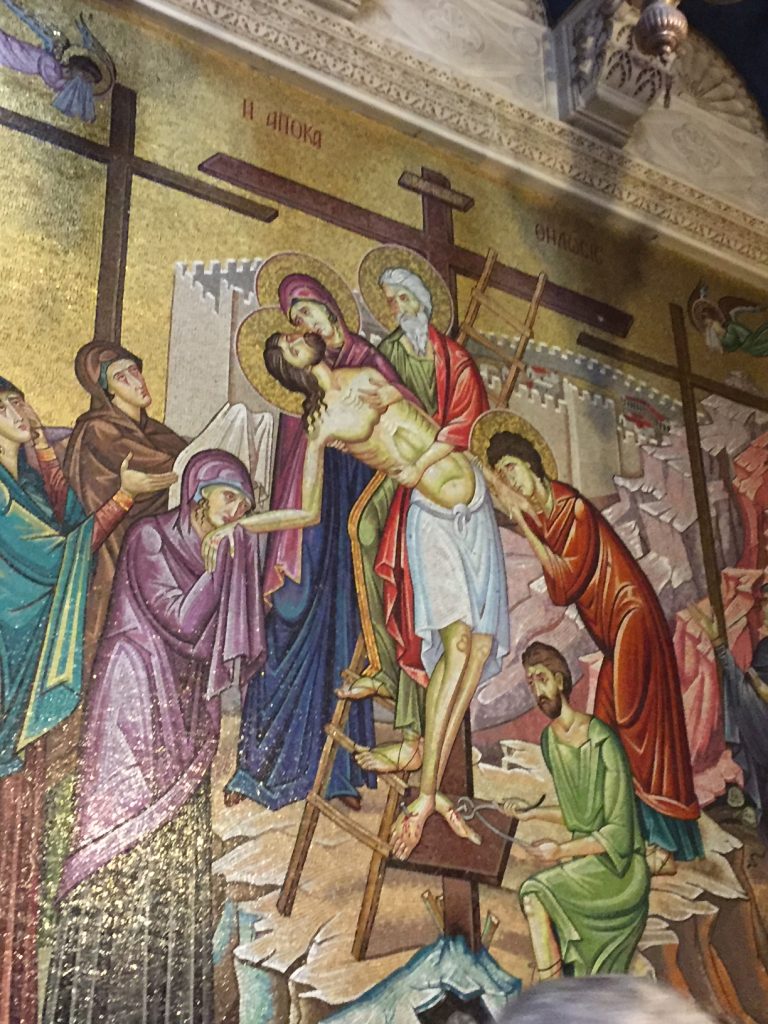 Murals line the walls of the Church of the Holy Sepulchre.

A Day To Remember
Upon departing the Old City, we saw marks of bullets from the war. It is a reminder of the constant battles that this tiny but mighty country faces each day. 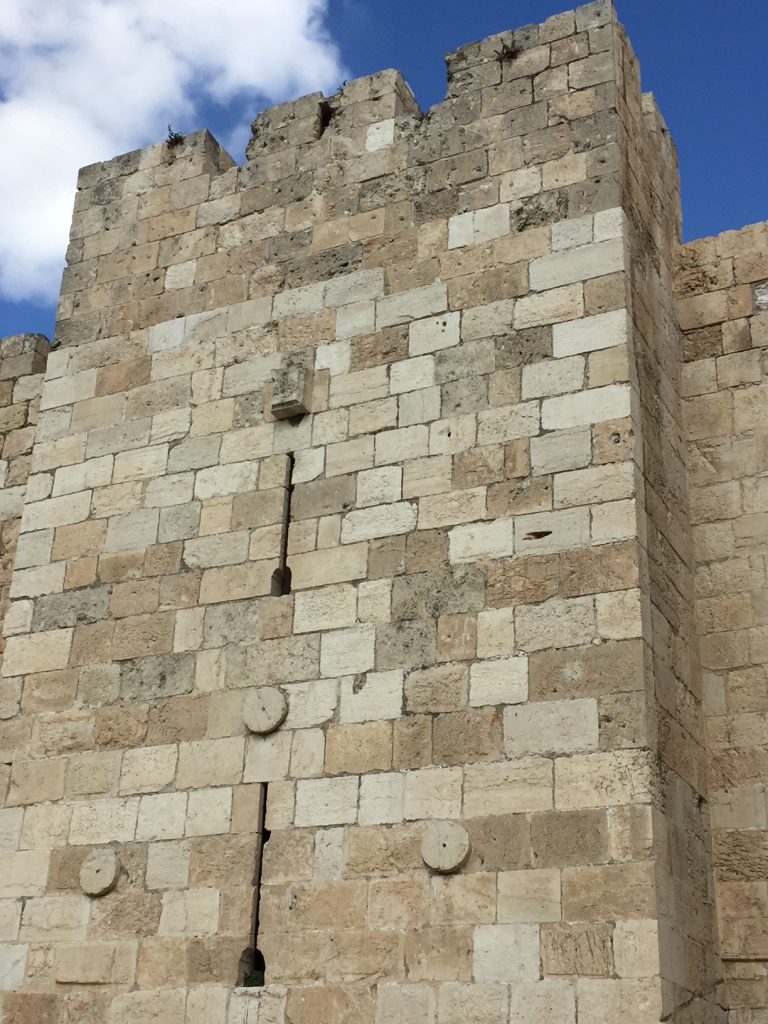 Can you see the bullet holes in the wall?

“Toda raba,” Isaac said as we headed back to the Viking Star. “In Hebrew toda raba means thanks a lot. Thank you for your decision to come to visit us in Israel. Maybe after being here you will be our ambassadors at home with your neighbors and families. Bless you all.”

“That was an incredible experience,” I said to L. “I’d really like to come back some day and see more of Jerusalem.”

We were lucky to be moving on to our next stop in Haifa, one of Israel’s most important and beautiful cities, where would be spending two full days. Can’t wait to show you all the magnificent sites — Haifa is built on the slopes of Mount Carmel and overlooking the Mediterranean Sea. 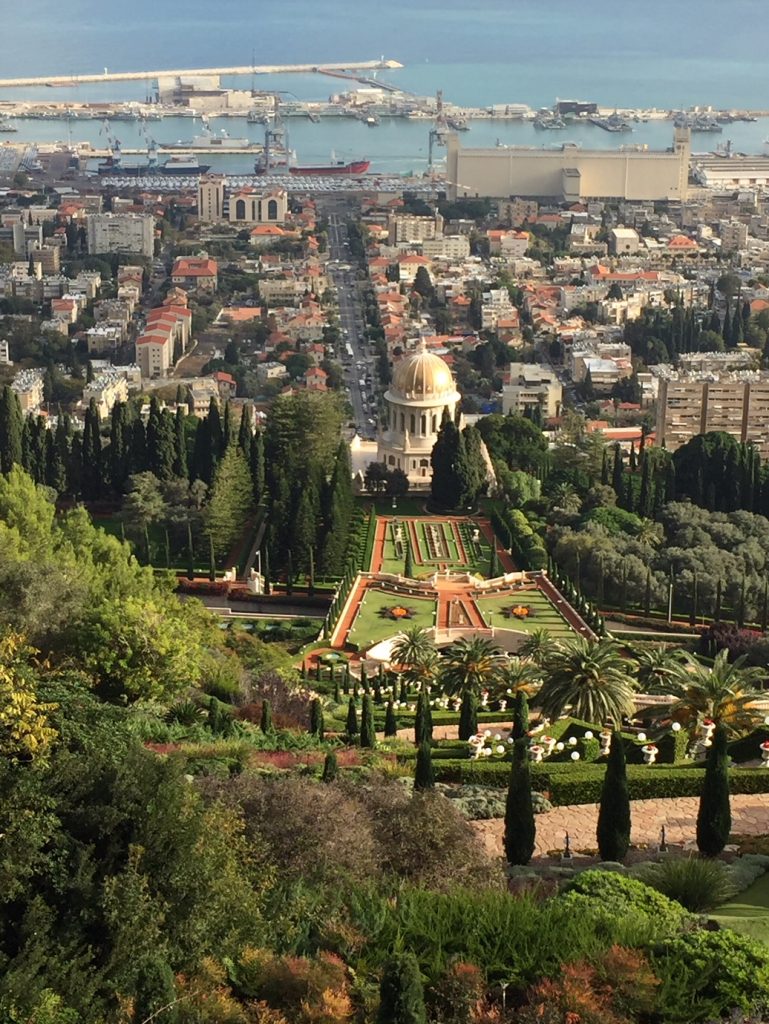 The city of Haifa overlooks the Mediterranean Sea.