My First Visit To Greece: Climbing To The Top Of The Acropolis 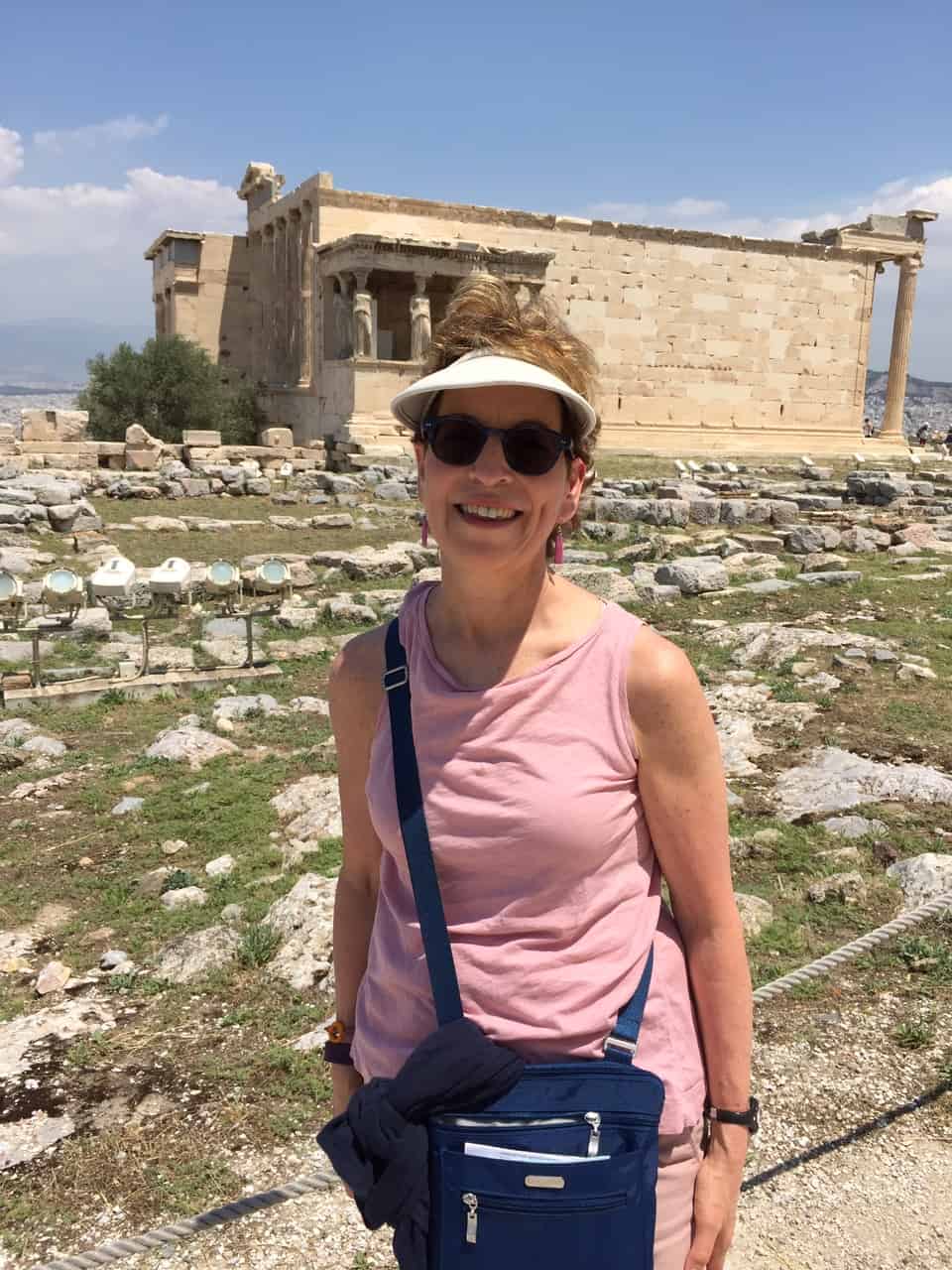 It was day two of my first visit to Greece with my sister N and daughter A. As I mentioned in my previous post, “The Amazing Old World of Athens,” we were spending a weekend in Athens and then going for a week’s vacation on the island of Santorini.

It was a hot and sunny Saturday. We woke early and enjoyed a delicious breakfast buffet, which was included in our stay at the Athens’ Electra Palace Hotel. There were eggs, fresh Greek yogurt, cereals, homemade waffles, fruit, croissants and more. With our tummies full, we were ready to climb to the top of the Acropolis, the most popular Greek landmark. 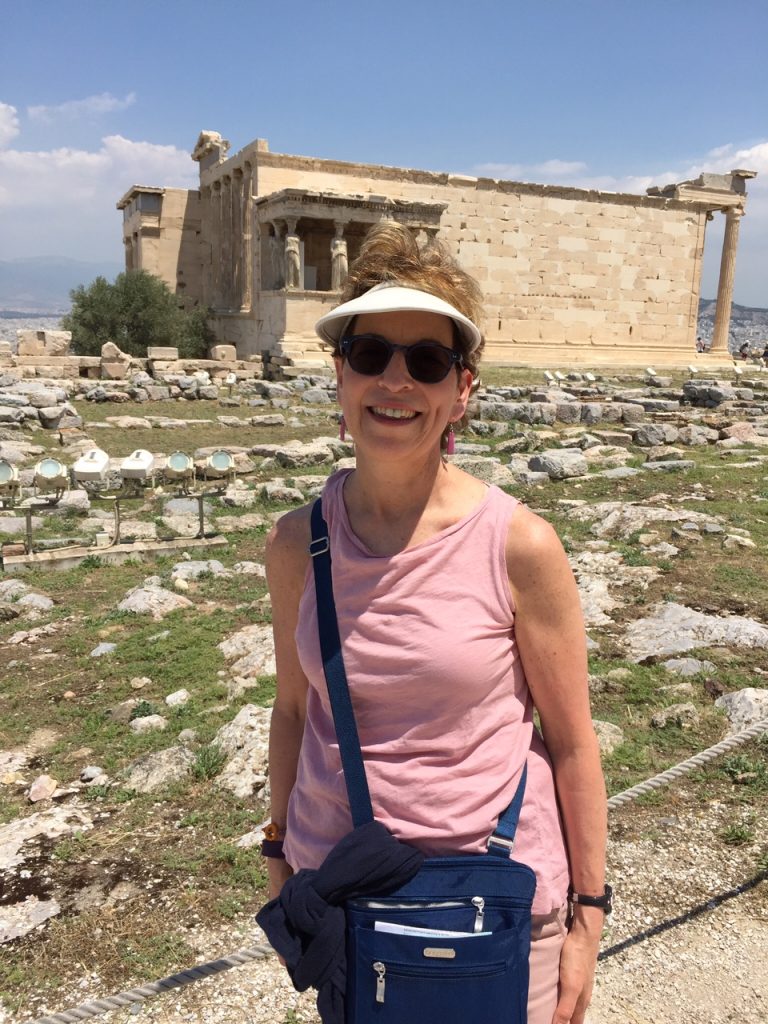 Touring The Acropolis
The Acropolis sits high up on a hill. We followed the signs and bought our tickets on site. It costs $20 euro for a ticket to the Acropolis and $30 euro if you want to see all of the monuments around the city. You can get your tickets in advance online or at the entrance. There was hardly any wait time on site. (Note: Wear sneakers and be careful under foot as it is not an easy climb. Plus pack plenty of water bottles to stay hydrated in the summer time.)

Athena, a local guide was offering tours for an additional $20 euro. We decided to join her and were very glad we did. There is so much to learn about ancient Greek culture and without a guide it would not be as interesting. 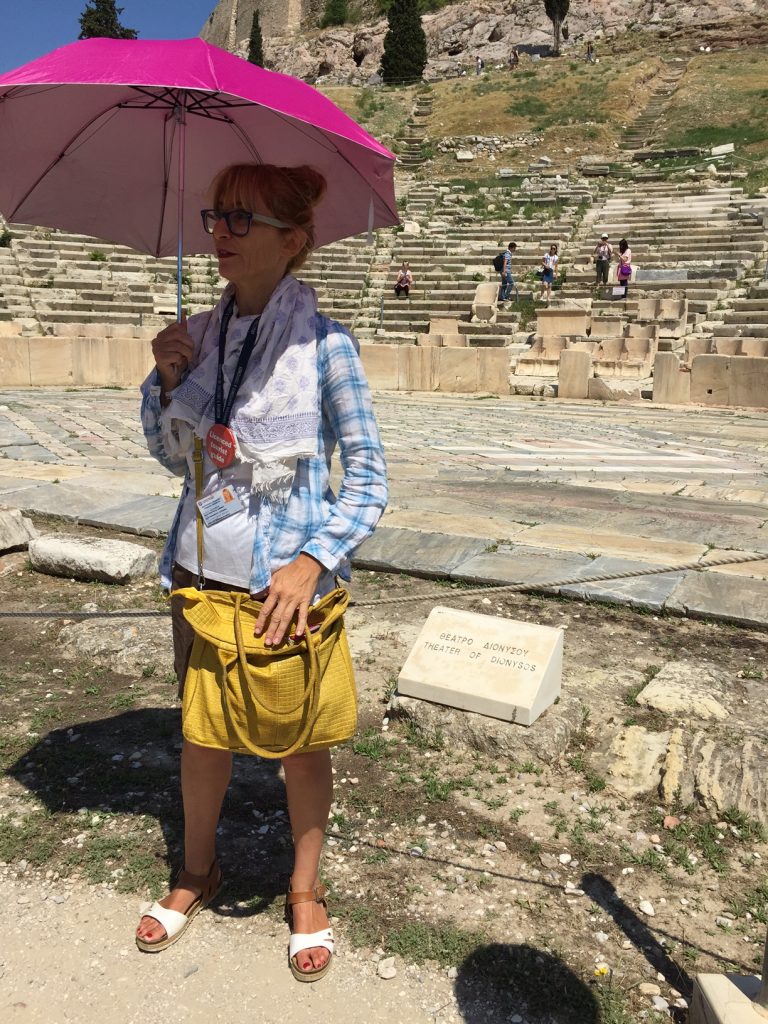 We ascended the rocky path to the Theater of Dionysos. “The first theater of the world was born in Greece. The Odeon was the auditorium. Theater means viewing things in Greek,” explained Athena. “The orchestra is in the middle. Actors are called hypocrites. Group therapy was the theater of psychotherapy. Soma means soul. The soul is the psyche. They improved the soul through the theater. ” 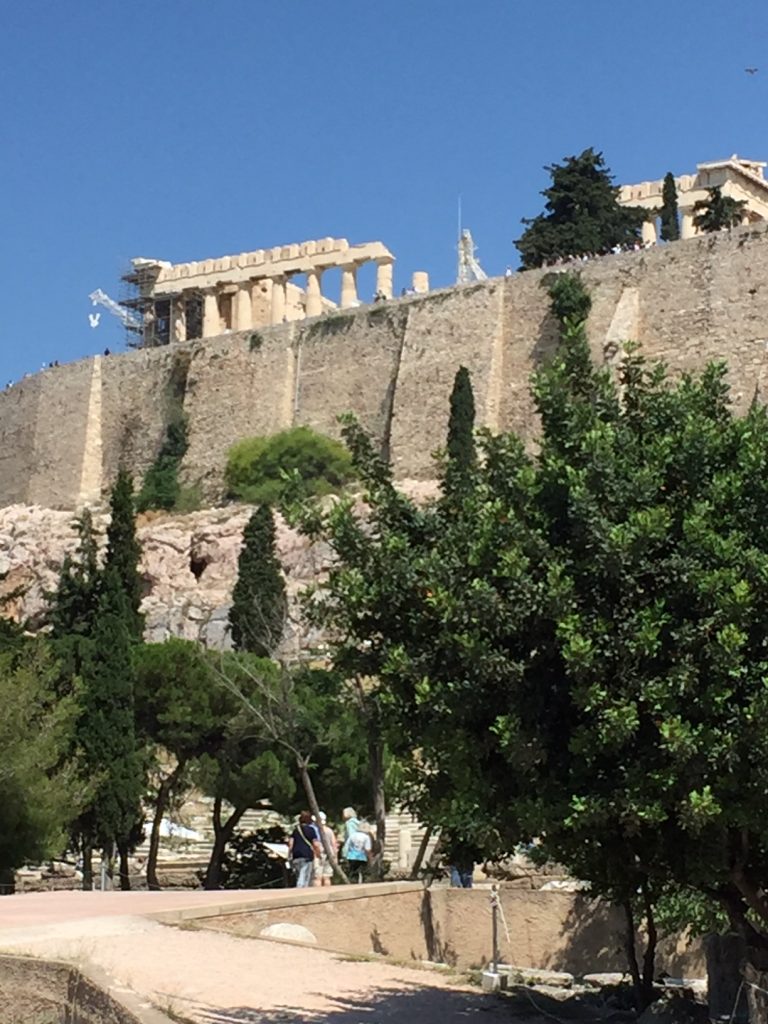 “Everything in Greece has its meaning,” said Athena.  She told us about Greek origins of words. “The Latin alphabet comes from Greek. ‘P’ sounds like ‘c’ and symbolizes the soul. When a word starts with ‘eu’ it means beautiful, such as ‘euphoria.’ Pathos is when you suffer. The mind is the killer and the healer.” That’s where homeopathy originates from. 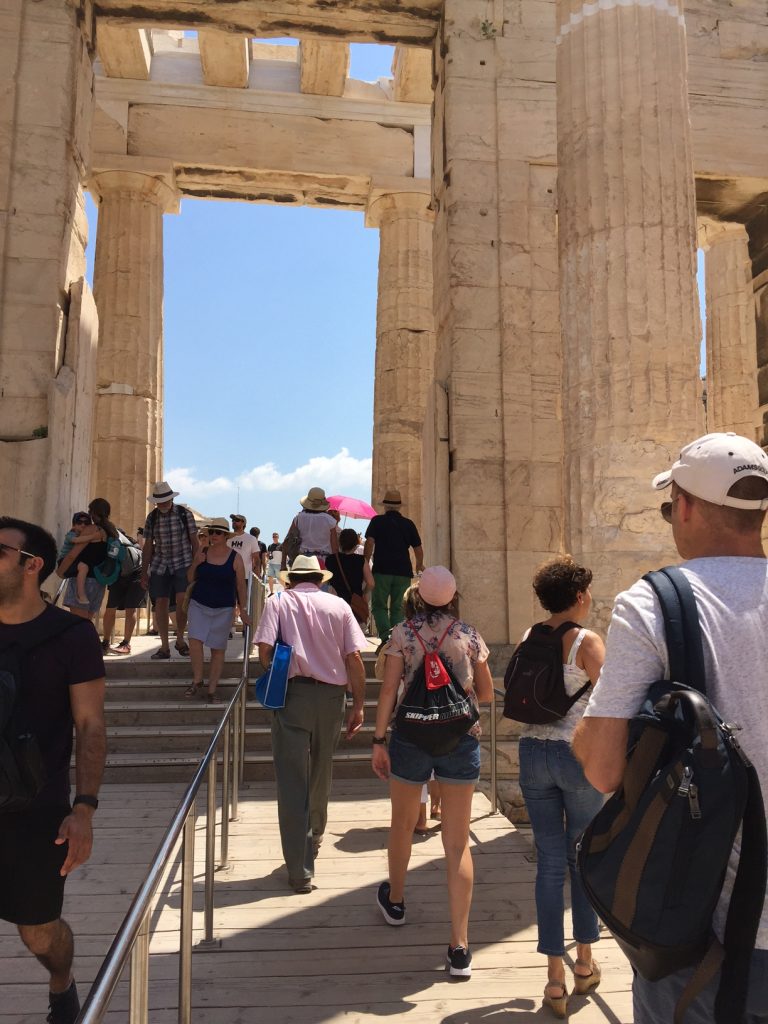 We climbed higher. One thousand feet above the surface of the sea, we made it to the Parthenon, the pinnacle of the Acropolis. Athena said it took 90 years to build the Parthenon. The marble was slippery underfoot so we were very careful walking around. It was an amazing feeling to be in the middle of such ancient history.  As the travel writer Rick Steves says, “Climbing Acropolis Hill and rambling its ruins, you’ll feel like you’ve journeyed back in time to the birthplace of Western civilization.” 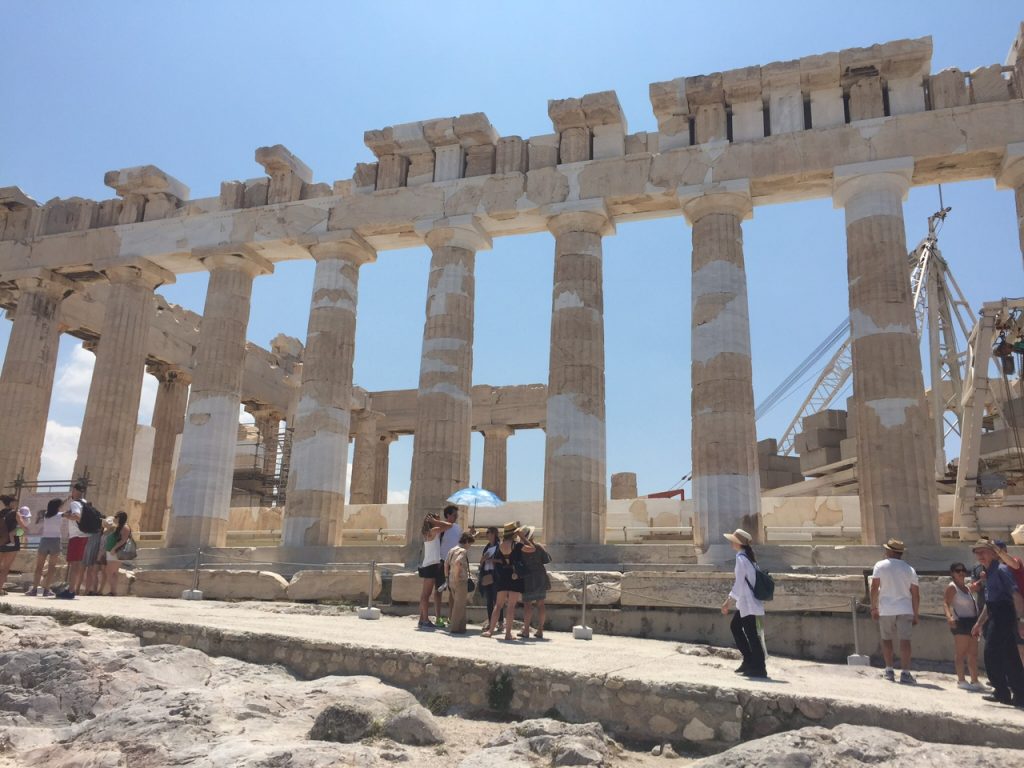 At the end of the tour, Athena recommended several good restaurants in the Plaka area for lunch. She also encouraged us to go shopping for jewelry in Plaka. “According to the Greeks, gold has a healing property,” said Athena. “That’s why there are so many gold jewelry shops in Greece.” (Who knew, a good reason to buy gold jewelry.)

Eating In The Plaka
The Plaka neighborhood is touristy with lots of shops and restaurants. My daughter A took out the map and we navigated around the winding streets to find the restaurant Hermion, that Athena suggested. It had a full luncheon menu and we were glad to sit after our very active morning. 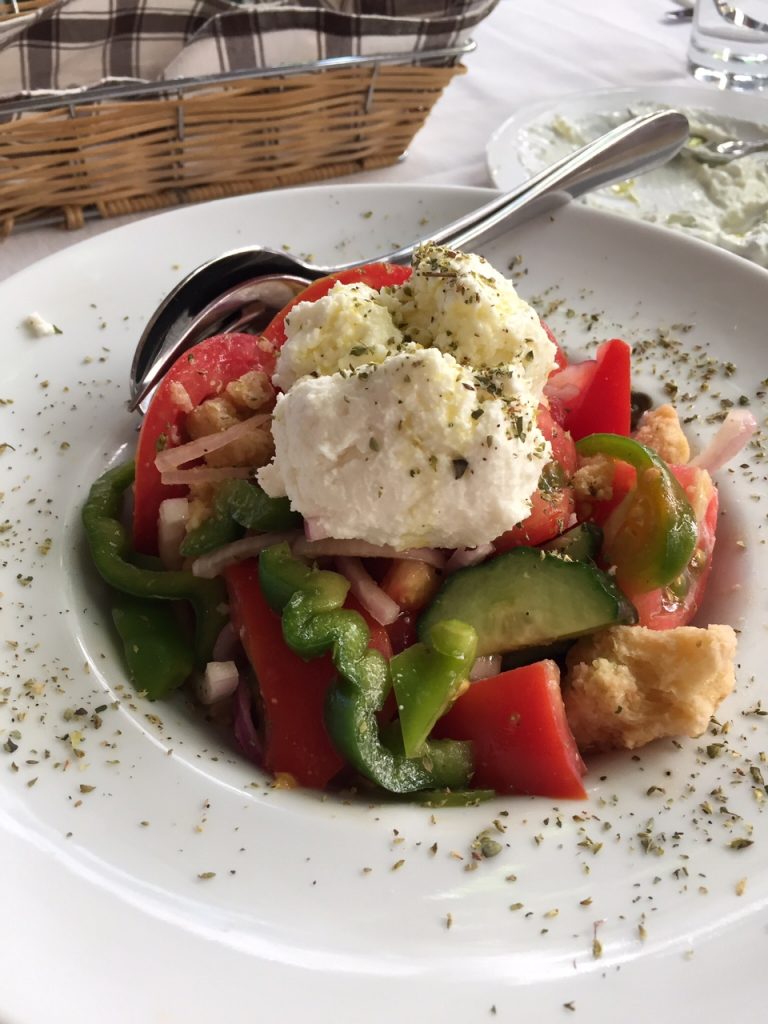 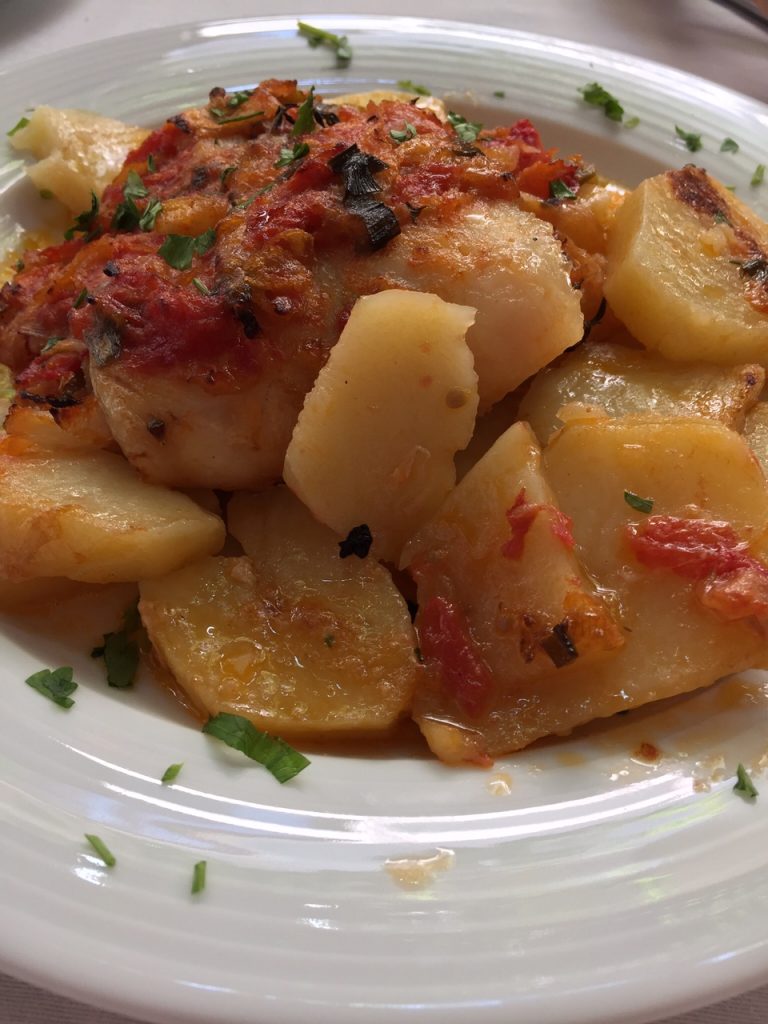 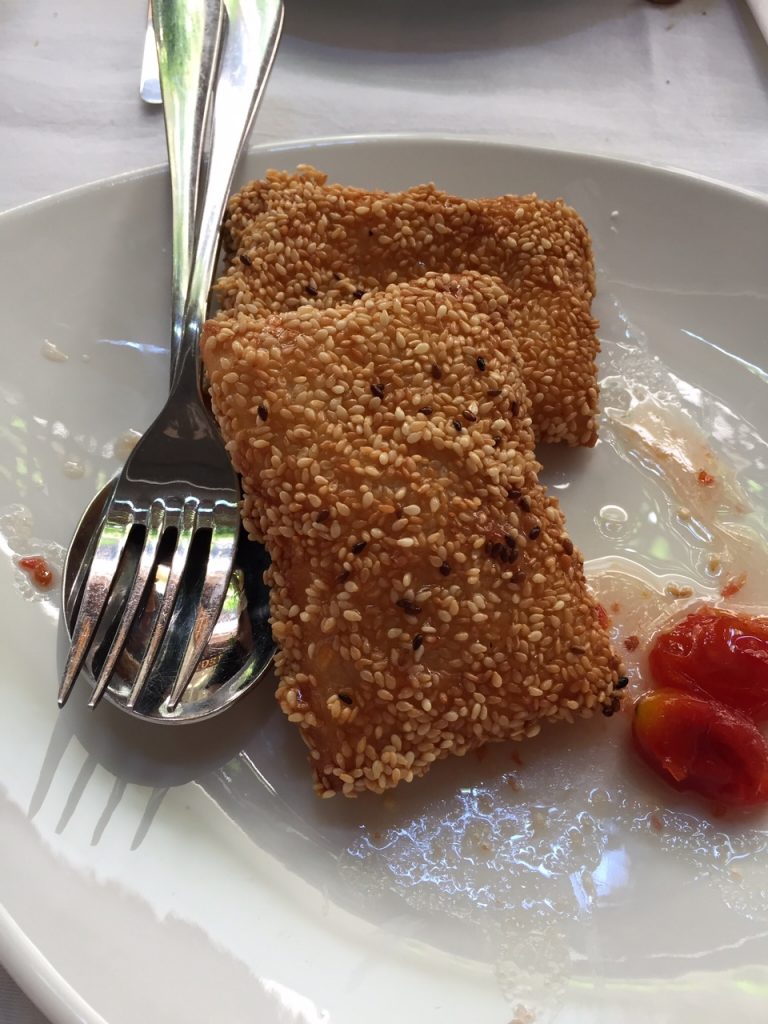 Tummies full again, we totaled more than 15,000 steps by the time we shopped the Plaka, stopped by the Athens Flea Market and walked all the way back to our hotel. 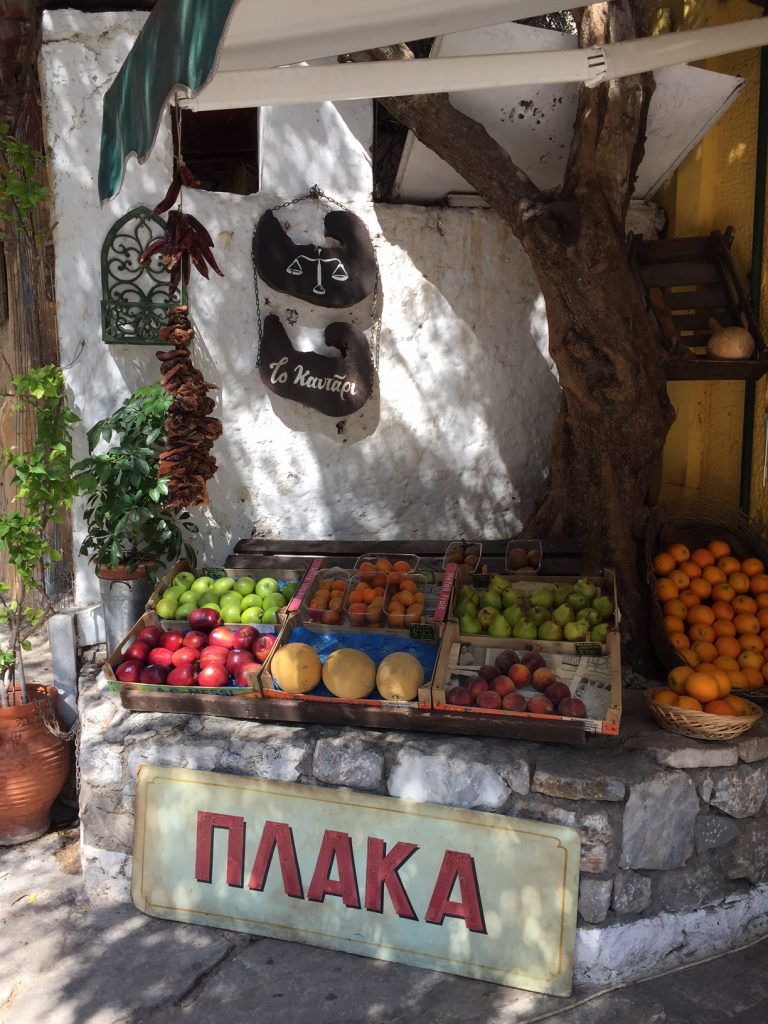 Dinner At The Cinque Wine Bar
Before we knew it we were showered, changed and ready to stroll to dinner at the Cinque Wine Bar. We had reservations at the tiny spot where we sampled flights of Greek wines — red, white, and rose — and dined on a lovely tray of charcuterie including meats, nuts, cheese and bowls of olives. It was so good, so good, so good! Did I say I LOVE Greek food. I do! I do! I do! 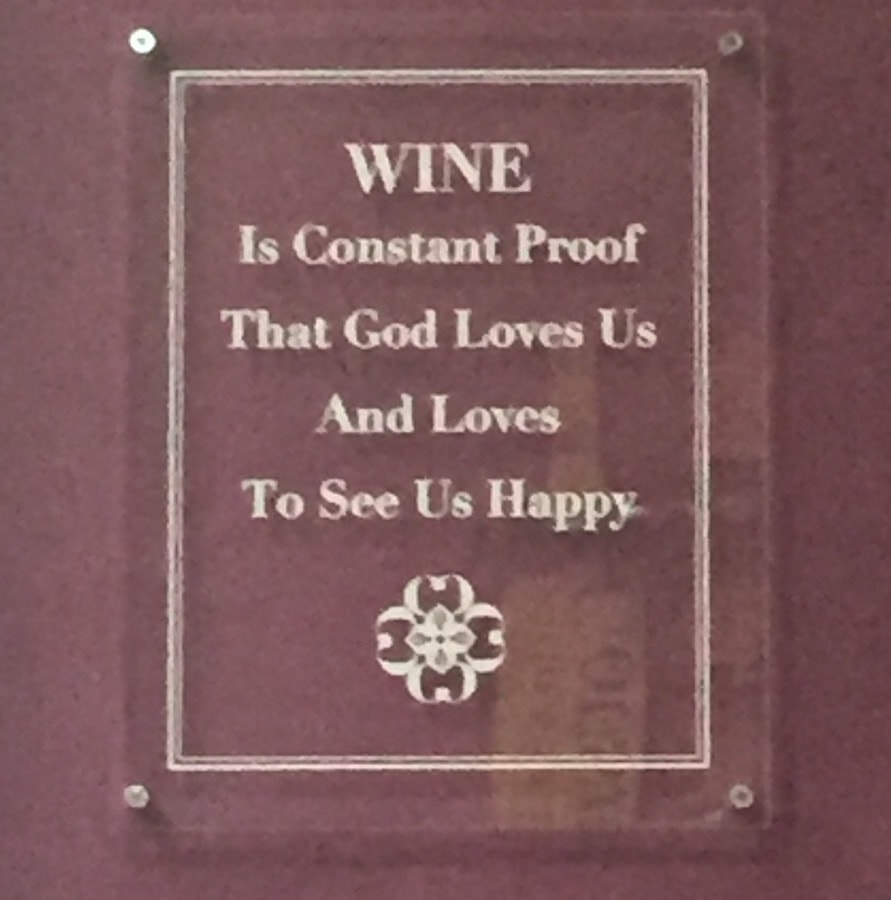 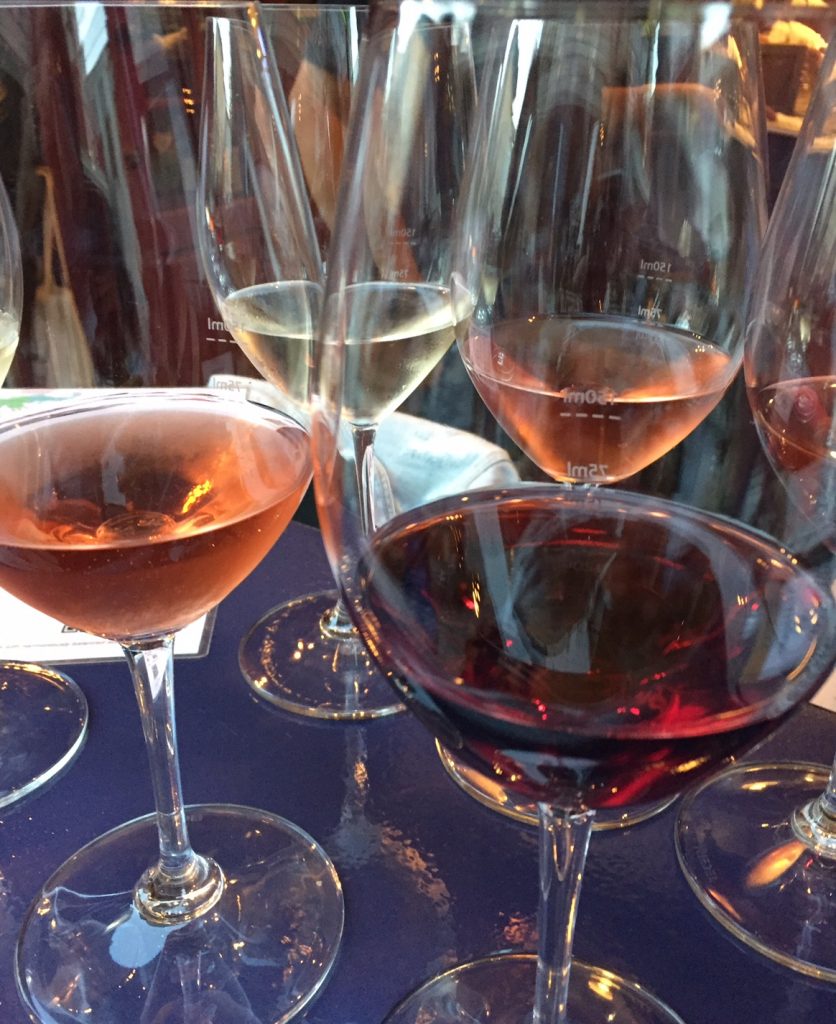 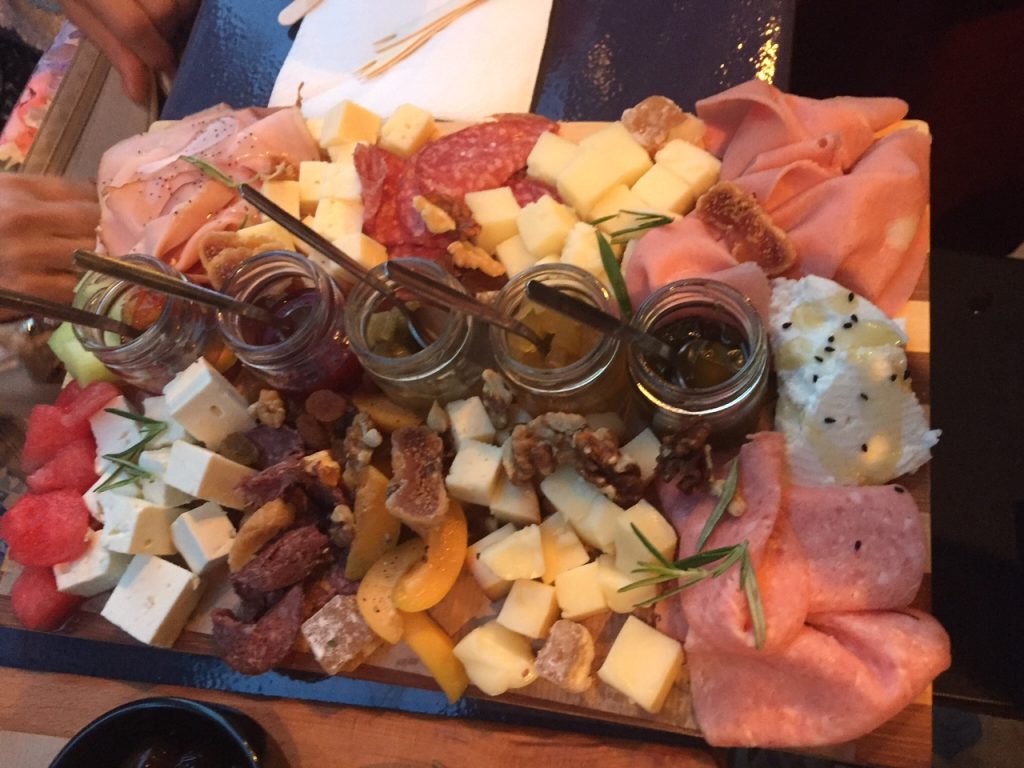 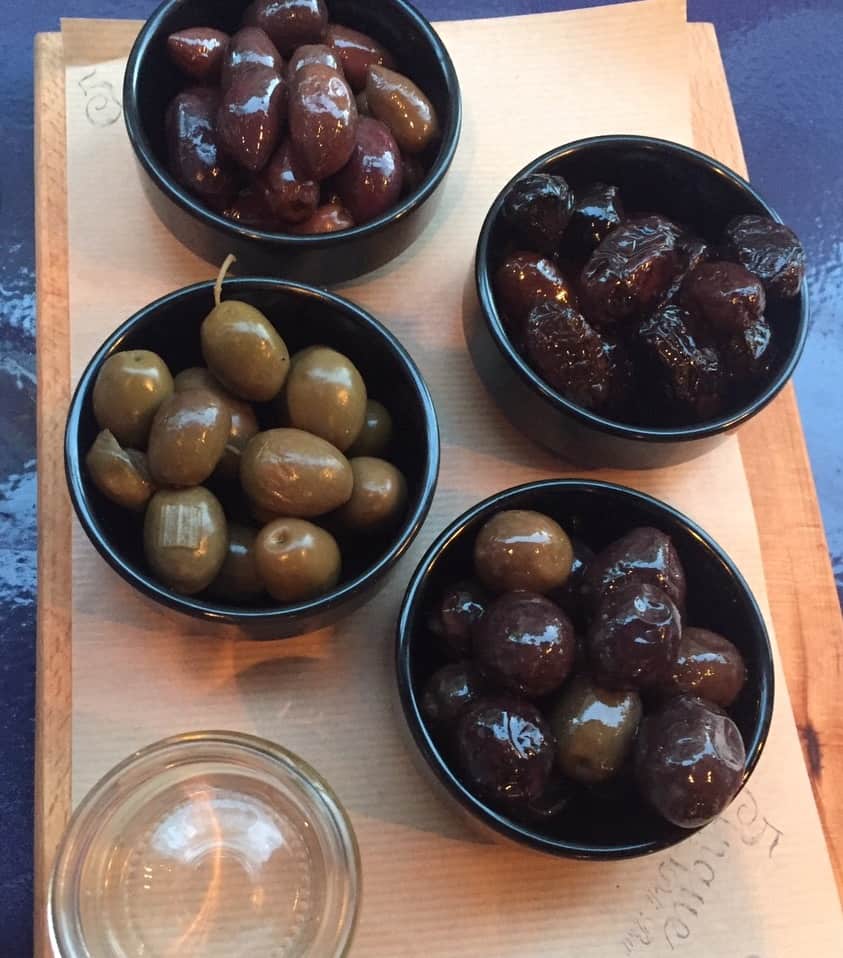 Our Last Day In Athens
We spent our last full day in Athens on Sunday at the Acropolis Museum. Entry is $5 euro and we purchased our tickets at the door. (Note: Many shops are closed on Sunday in Athens if you plan to be there on a weekend.) 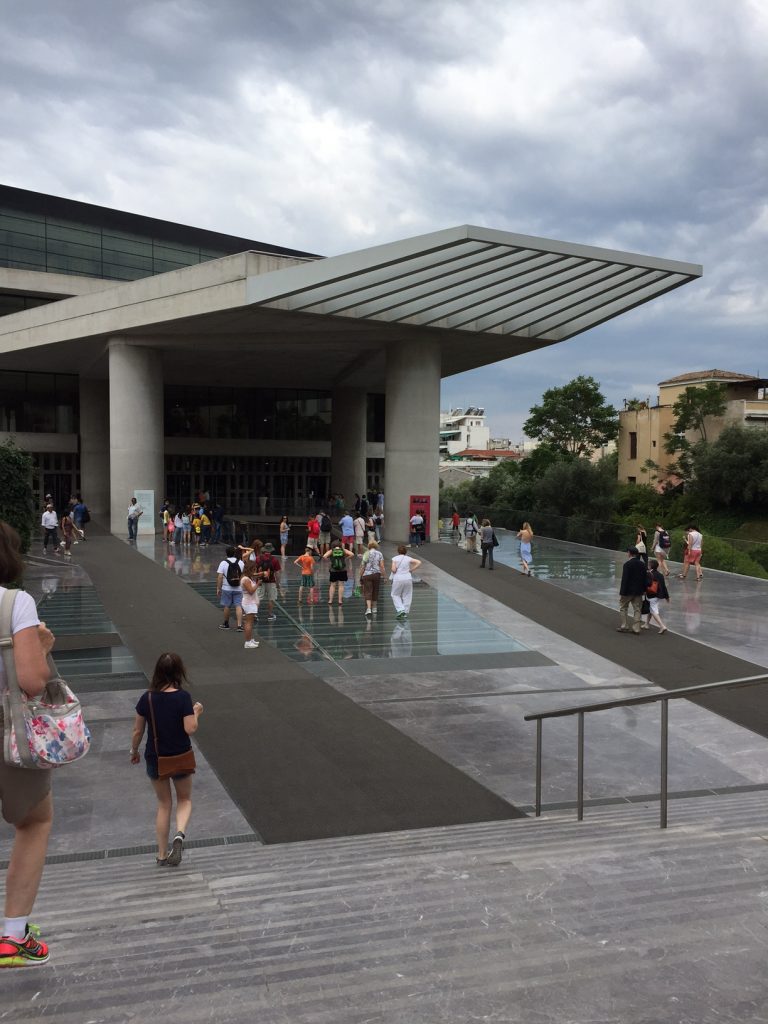 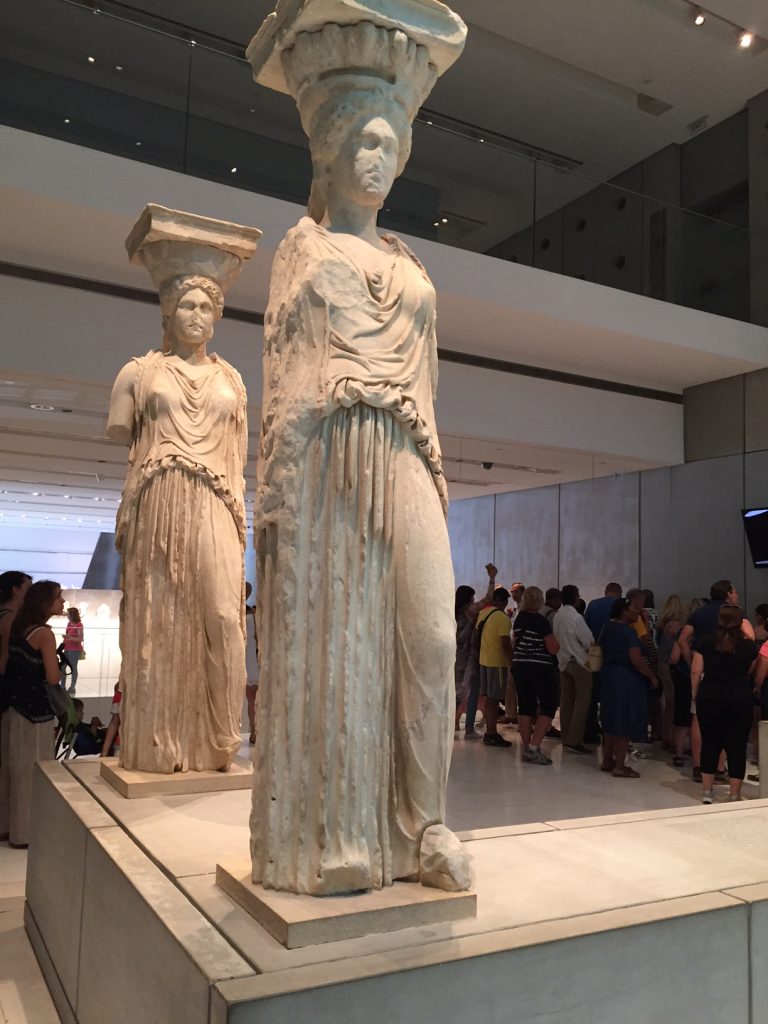 Built in 2009, this contemporary structure houses a large amount of artifacts from the Acropolis. A neat part of the museum is the entrance where you can peer through glass into the ruins being excavated underground. Next time, I definitely want to go on a tour of the museum. The modern building is well worth a visit and also boasts a fabulous view of the Acropolis. 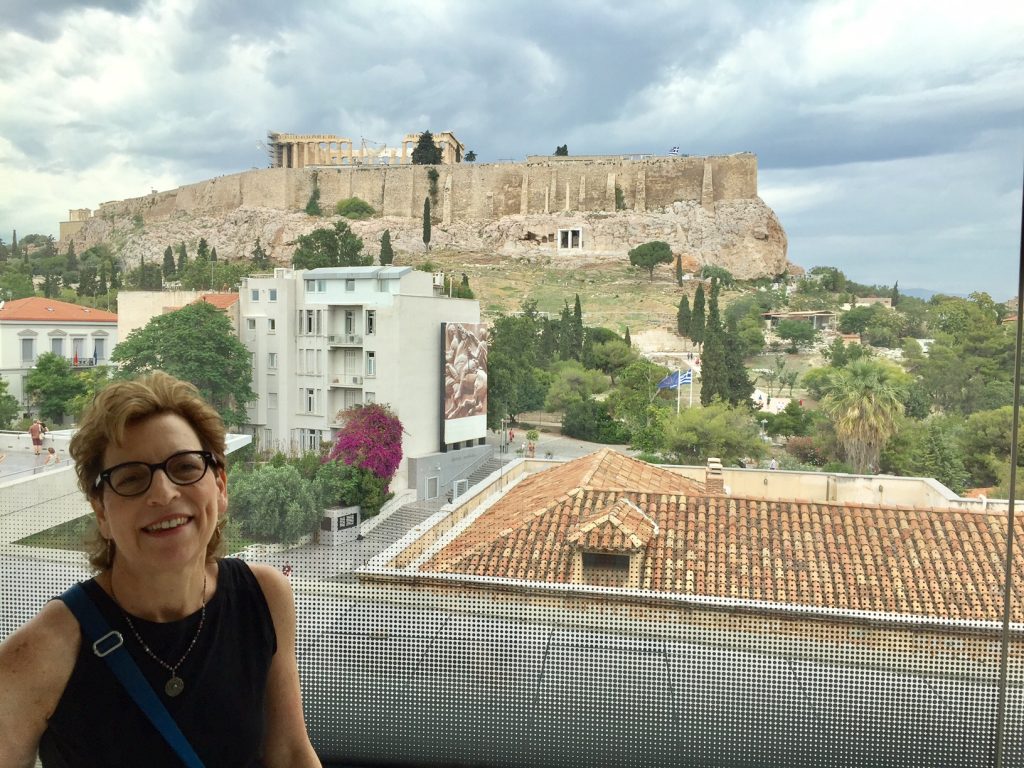 Tomorrow we say ‘gia’ or bye to Athens and board a plane for a short flight to Santorini and the blue waters of the Aegean Sea.

More to come from Oia, Santorini.