My Best-Ever Fashionista Day At the Dior Exhibit in London 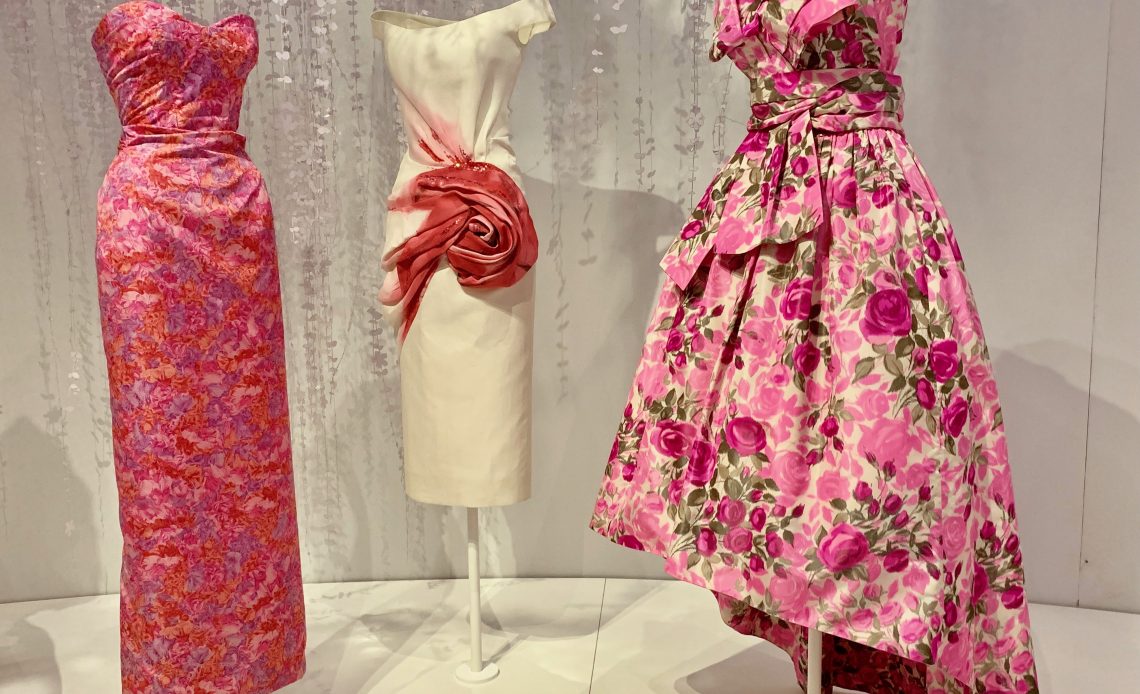 When I sat down to write about my second 24 hours in London, I realized that I needed to pen a special post about my best-ever fashionista day at the Dior exhibit at the Victoria & Albert Museum. OMG, it was so fabulous that I wish I could have gone through the collection twice. But what’s so great about sharing the exhibit with you is that I kinda get to do that! 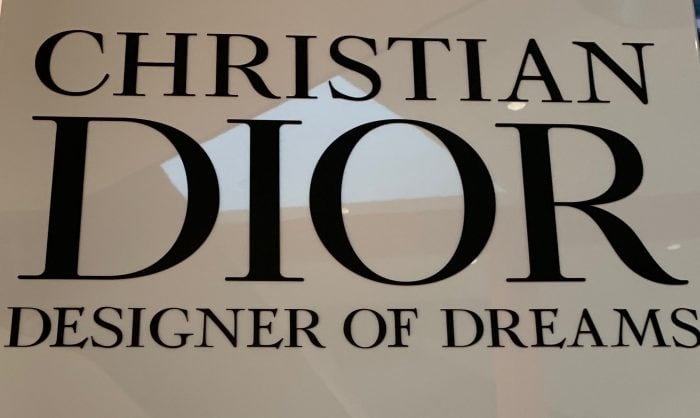 Christian Dior – Designer of Dreams exhibit is at the Victoria and Albert Museum this summer.

Ooh, ooh, ooh, if you’re a fashionista like me by the time you finish learning about Dior’s life (which I’m going to share a bit of) and viewing his magnificent couture creations (which I’m going to share a lot of), you’ll want to book a summer trip to London. I recommend you hurry because the show closes on September 1st. Be sure if you plan to go that you get advance tickets online. 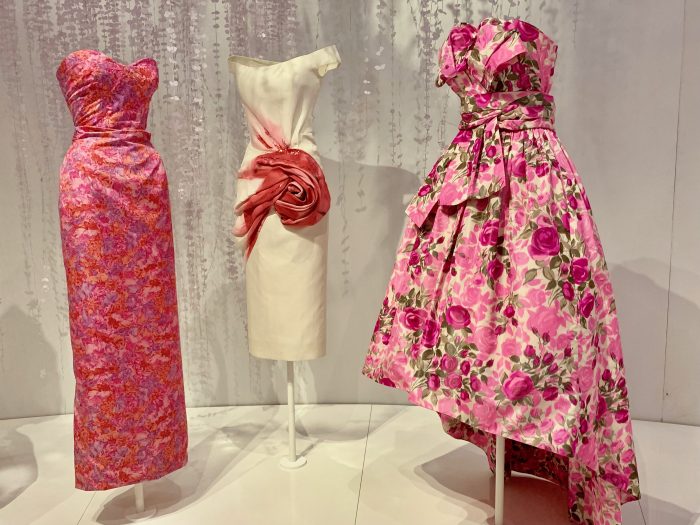 These Dior designs were inspired by the gardens, a favorite theme of Christian Dior and the designers who followed him

I hope my pictures do the show justice. I’ve curated my photos for crops, color, lighting, contrast and brightness to showcase the designs and fabrics. 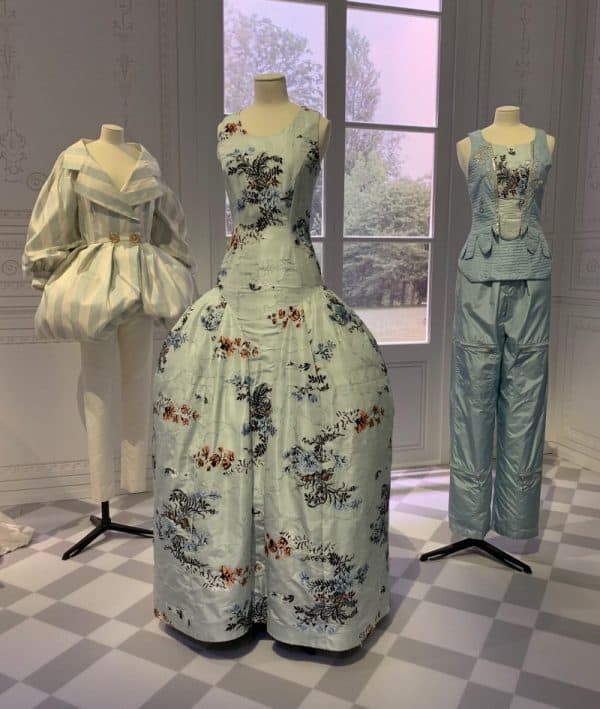 The outer garments are from Raf Simons 2014 and the center gown, inspired by the painter Manet’s female subjects, is from John Galliano 2007

An historic look back at Christian Dior

I’ve been a fan of Dior designs over the years — at the MET Costume Exhibitions and adorned on celebrities or pages of Vogue — yet it wasn’t until going to the Christian Dior: Designer of Dreams exhibit that I understood Dior’s history and his design inspiration.

According to the V&A show: “Christian Dior was born into a wealthy Normandy family in the French seaside town of Granville in 1905. As a child he shared his mother’s love of gardens.” Architecture and designing fancy costumes for his friends were two other early passions. His family sent him to school to study political science in Paris, where he ended up living a bohemian lifestyle among artists and musicians. 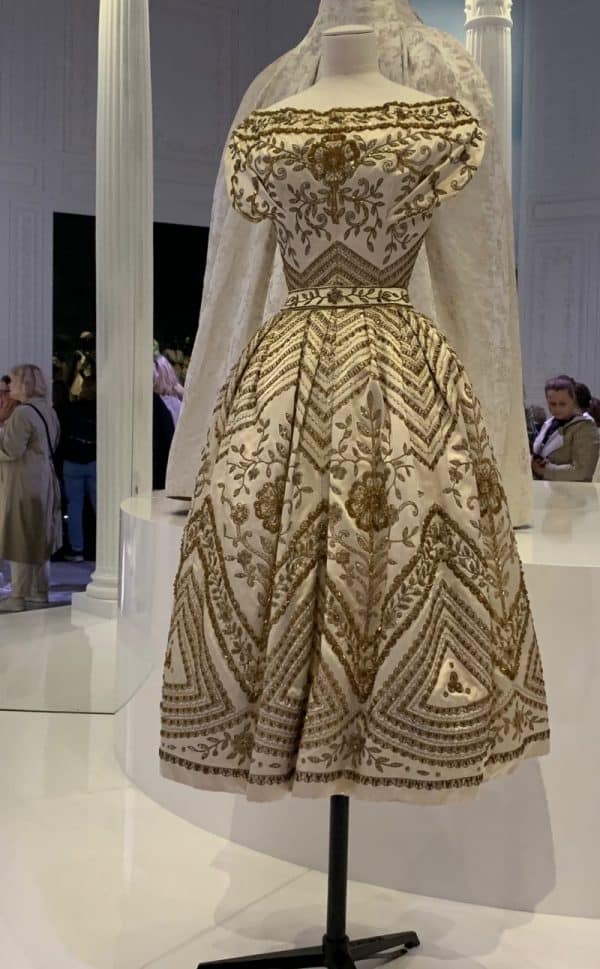 This Palomita Dress, meaning ‘little dove’ was by Dior 1953

In 1928, he opened an art gallery, which closed after his family’s fortune collapsed during the Depression. He took up fashion drawing to make a living, later working with top couturiers.

In 1946, Dior founded his own couture house with backing from a textile manufacturer and in 1947, the House of Dior launched its first collection. Great accolades from the press brought Dior instant success and worldwide recognition in fashion. By 1955, House of Dior accounted for over 50% of overseas exports of French haute couture. 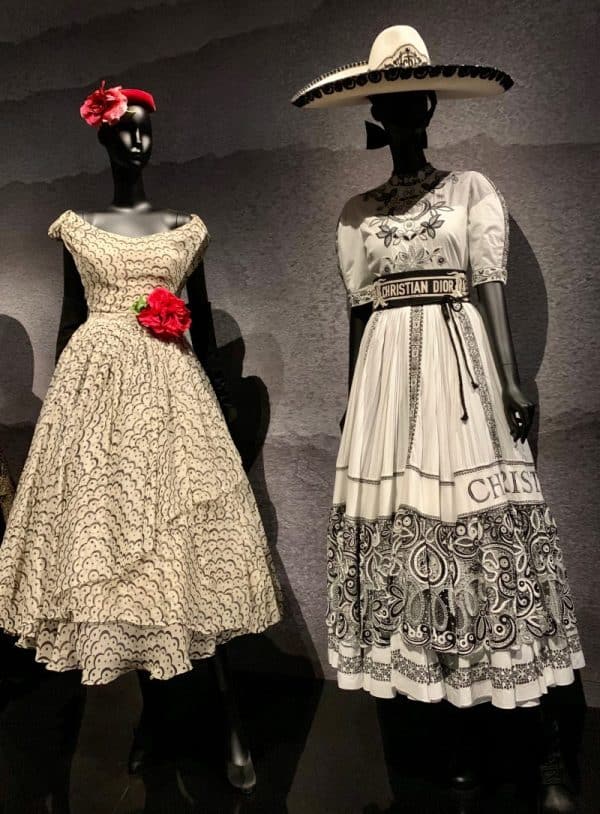 Sadly, in the peak of his career, Dior died suddenly in the fall of 1957. Note: Based on Wikipedia, it sounds like he died of a heart attack.

The influences in Dior’s designs

Each exhibit hall at V&A showcases the influences in Dior’s designs — from his travels around the world in his twenties to his fascination with gardens. 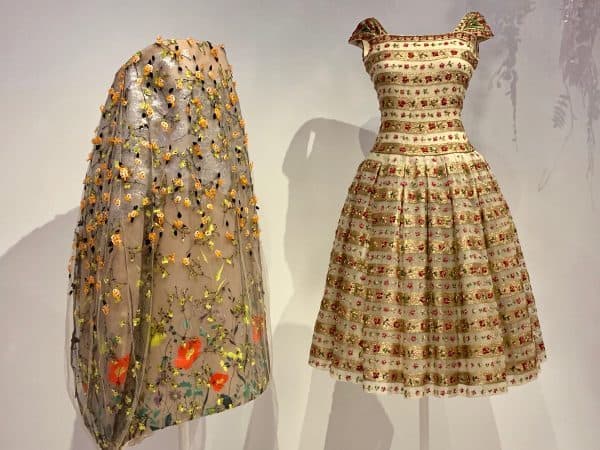 Can you guess which garden inspired dress is from 2013 and which one is from 1955?

In Travels, the dresses feature the architecture, landscapes, art and textiles of his ventures to London, Athens, Istanbul and Leningrad, as well as his time spent in the Mediterranean. Some of the dresses are named after the places that he visited. Couture by more contemporary leaders of The House of Dior follow these themes as well. 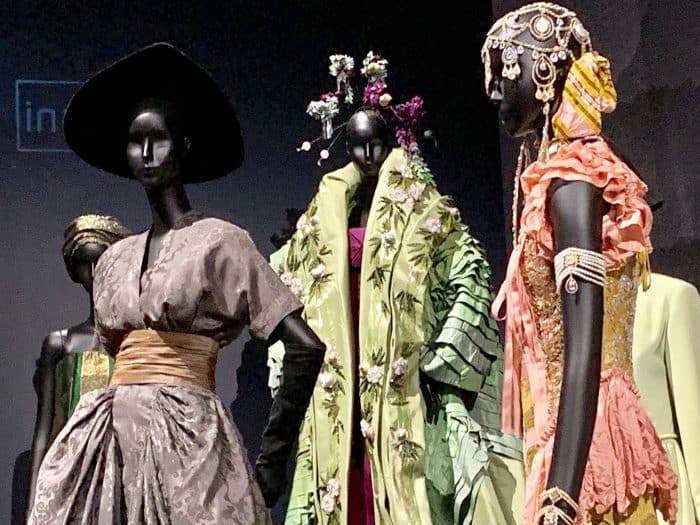 In The Garden hall, flowers are the focus “from single silk flower decorations to abundant prints and intricate embroideries. Dior said, “After women, flowers are the most divine of creations.” Ooh, ooh, ooh, a man after my own heart. 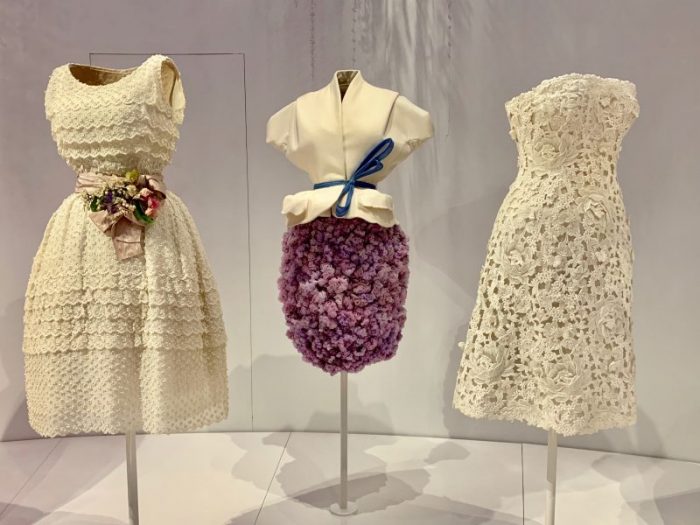 As the curator of the V&A show says, “Since 1957, the House of Dior has been led by six creative directors: Yves Saint Laurent, Marc Bohan, Gianfranco Ferre, John Galliano, Raf Simon and the current female designer, Maria Grazia Chiuri. Each is highlighted in the Designer of Dreams exhibit. It’s interesting to see how each creative director brings his or her own unique design perspective while carrying on the legacy of the House’s creator. 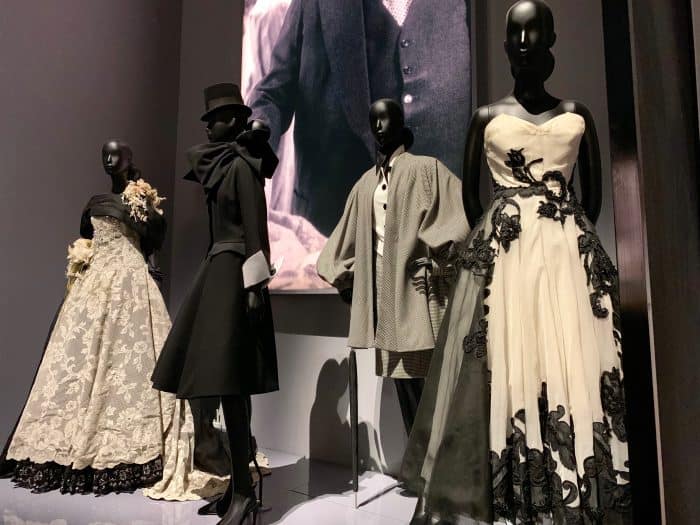 The seamstresses behind the garments

The curator also provides a ‘behind the scenes’ look at the prototype garments constructed by the women and men in the back of the house. As a fashionista and former seamstress, seeing how prototype garments come to life is equally exciting. It brought back memories of my own schooling when I dreamed of becoming a fashion designer during my early days in college. 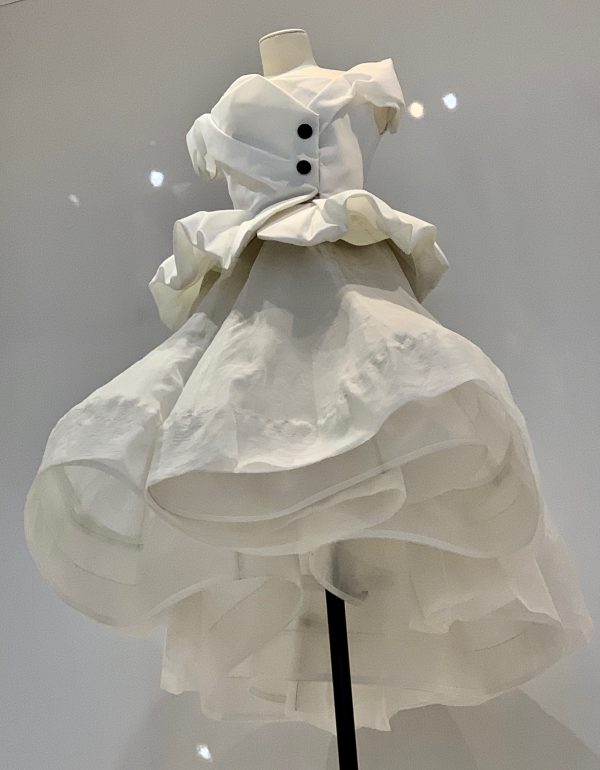 Dior says that “the real job is to get all the hands that cut, sew, try on and embroider to express all I have felt”

The grand finale of the exhibit encompasses a gigantic Diorama. Remember when you used to make mini dioramas in elementary school? It was absolutely awesome, with an immense selection of accessories in miniature — perfume, gloves, stockings, jewelry, shoes, and hats. 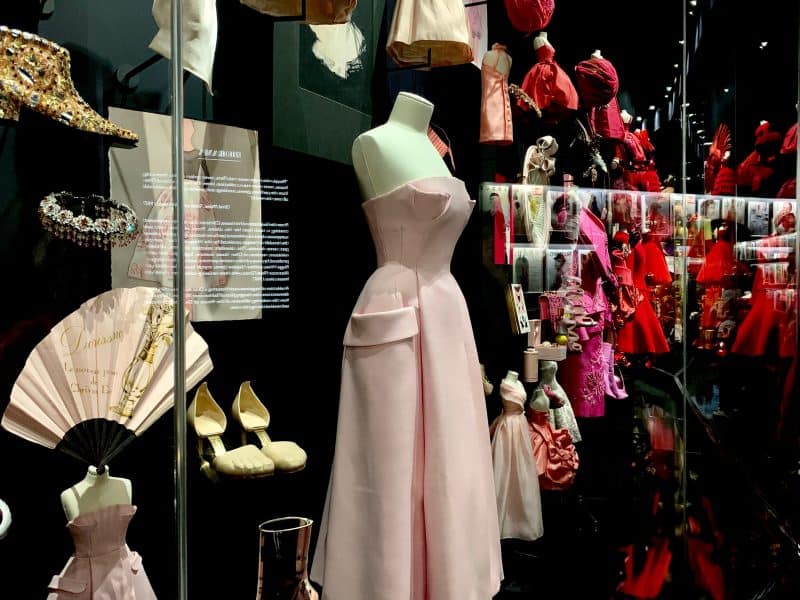 The Diorama showcases accessories in miniature

Haute couture made famous by the famous

The Diorama was so incredible, could there really be more? Yes, yes, yes, it was like having another encore. To close the show there were dramatic displays of black and white dresses, and the gowns made famous by the famous who wore them to the Oscars, Cannes, and other special nights. Gowns worn by Jennifer Lawrence, Rhianna, Lupita Nyong’o, and Nicole Kidman were on display along with their celebrity photo op. 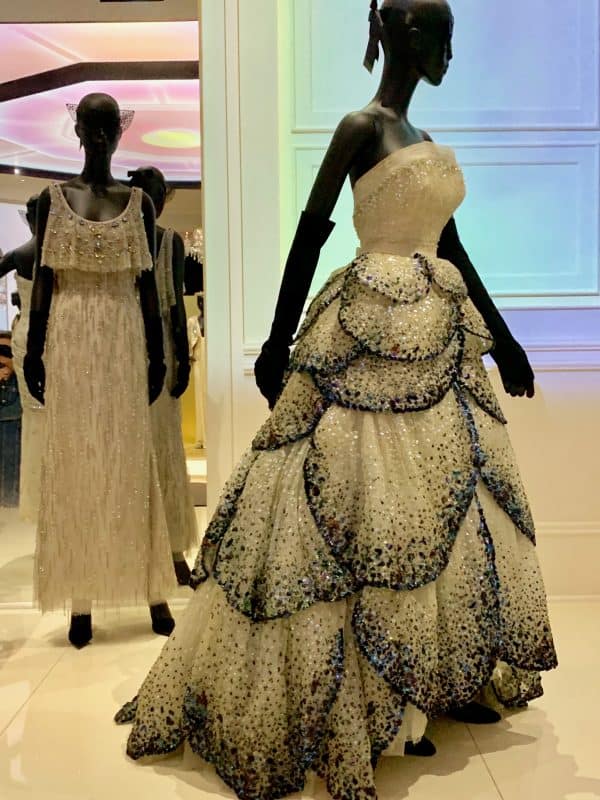 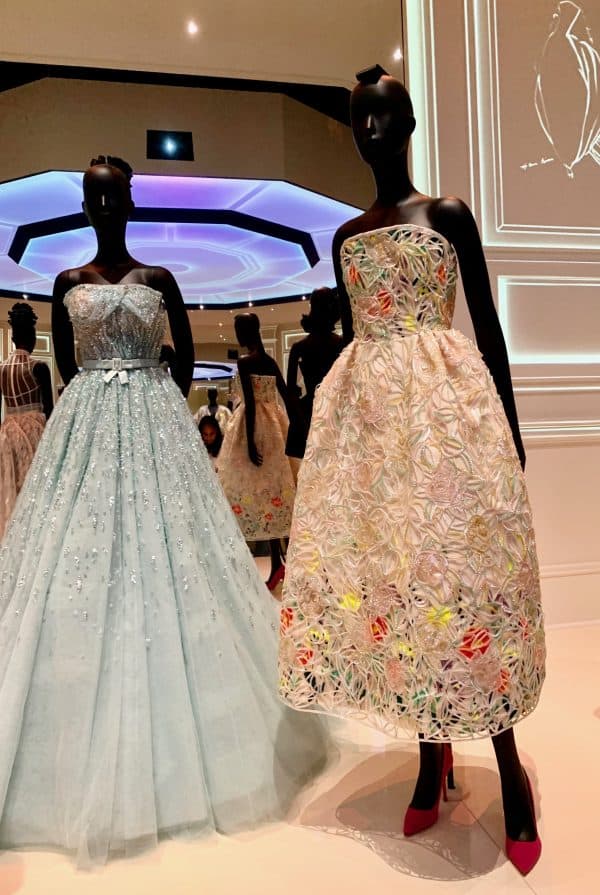 It was thrilling to see so much fabulous fashion in one venue. Simply breathtaking to take it all in. I wish I could have made a second round — yet with only two days in London, there wasn’t a minute to spare. We were off to our next stop. Thankfully, I have my photos so I can cherish the beauty of Dior’s haute couture forever.

P.S. Ooh, ooh, ooh, which Dior dress is your favorite? Leave a comment. Ooh, ooh, ooh, come back next week when I share where my fellow female travelers and I went and where we ate during our last afternoon in London.

P.S.S. In case you missed my first post about London, be sure to check out A Lovely Day of Sightseeing in London.