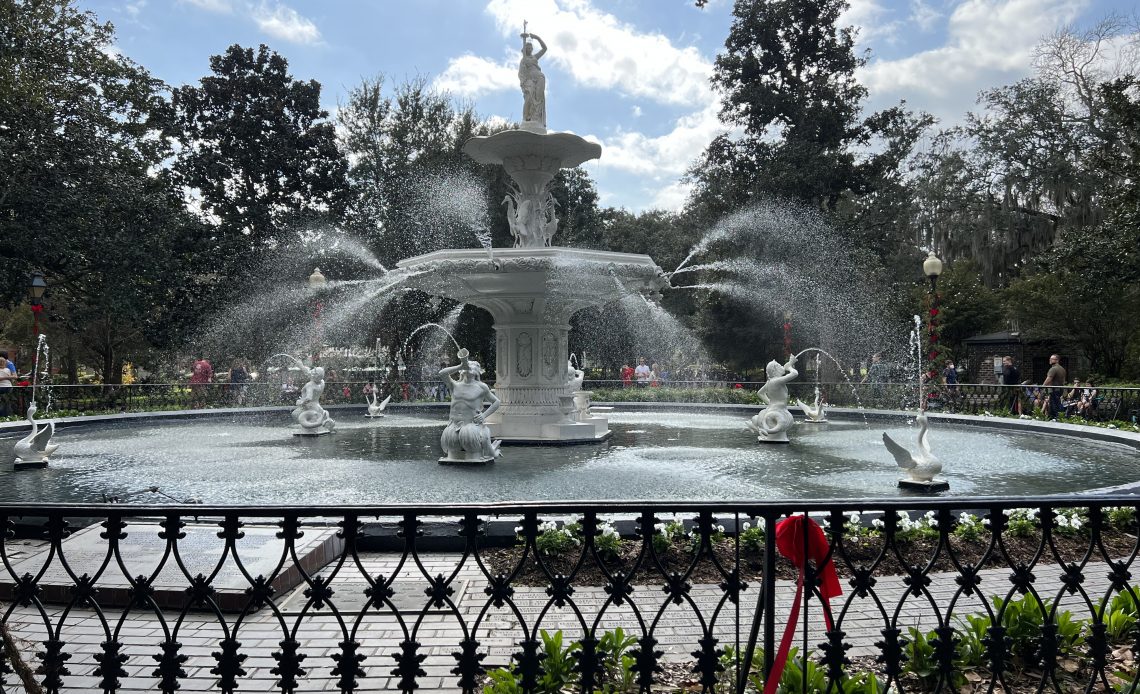 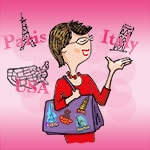 Ever since I saw Gone With The Wind with my nana M when I was a child, I’ve wanted to visit Savannah, Georgia. That’s why I was pleased this past winter when my BFF M and I decided to make a stopover there during our road trip to Florida. We spent 1.5 days in Savannah’s downtown district pre-New Year’s and had a great time exploring the city. 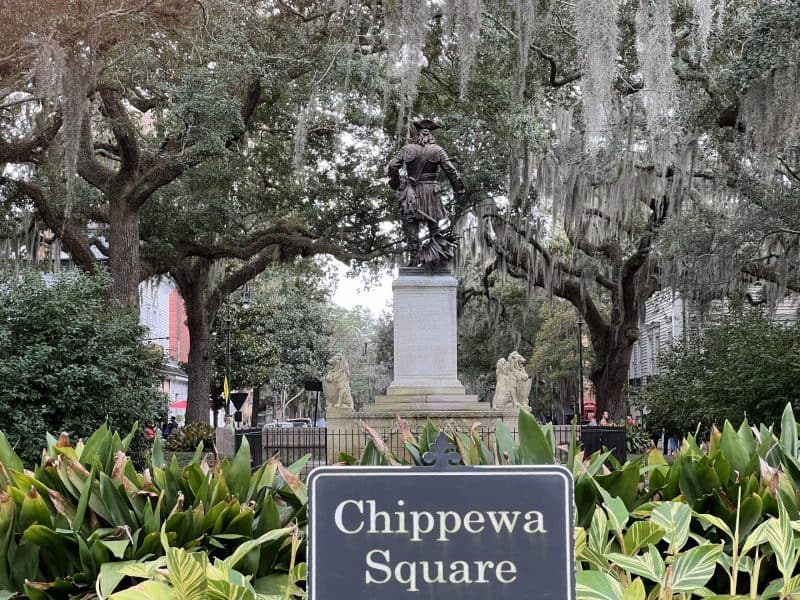 Hostess city of the South

According to Savannah Scene, a free guide that I suggest you pick up when in town or view at Savannah.com, Savannah is “one of America’s most picturesque and atmospheric places.” In 2021, the city received quite a few accolades, including #1 on U.S. News & World Report’s lists of the “Best Places to Visit in Georgia,” the “Best Relaxing Getaways in the USA,” and “Best Cheap Romantic Getaways.”

I can see why Savannah gets high ratings. It’s such a charming city filled with beautiful architecture, Historic Squares, haunted hotels, landmark cemeteries and churches, art galleries and museums, and a whole lot more. Plus it’s a foodie’s paradise — the culinary scene is absolutely fab with its Southern fare and hospitality. 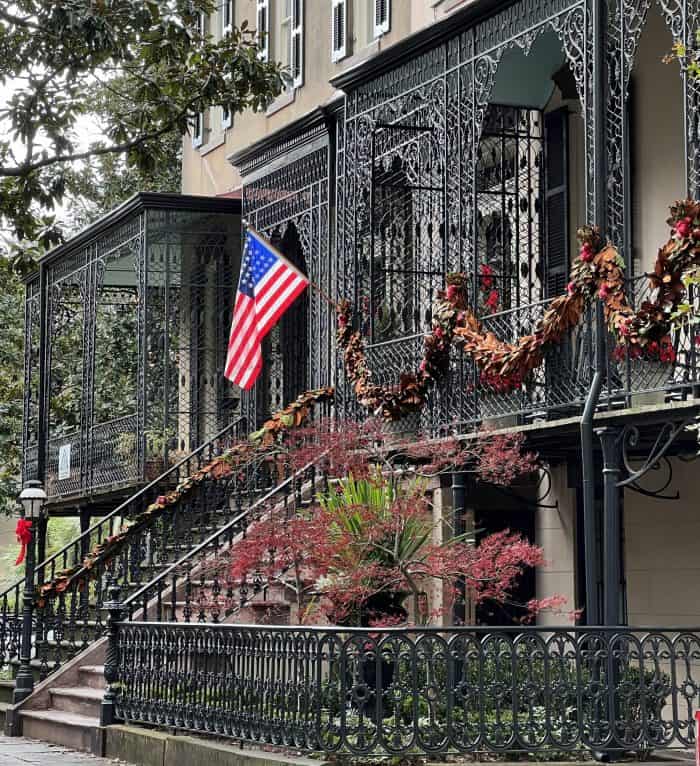 Savannah is lauded for its romantic architecture

Staying in the center of town

Unlike February 2021 when my road trip stopover in Savannah was drowned out by rain, this time the weather was sunny and extremely warm in the low 80s. M and I stayed at The Drayton Hotel, an historic lodging within walking distance of downtown and waterfront attractions. The quarters were tight but the beds and pillows were comfy.

Hotels in Savannah are expensive and valet parking even higher. I definitely suggest self-parking your car in a lot nearby. 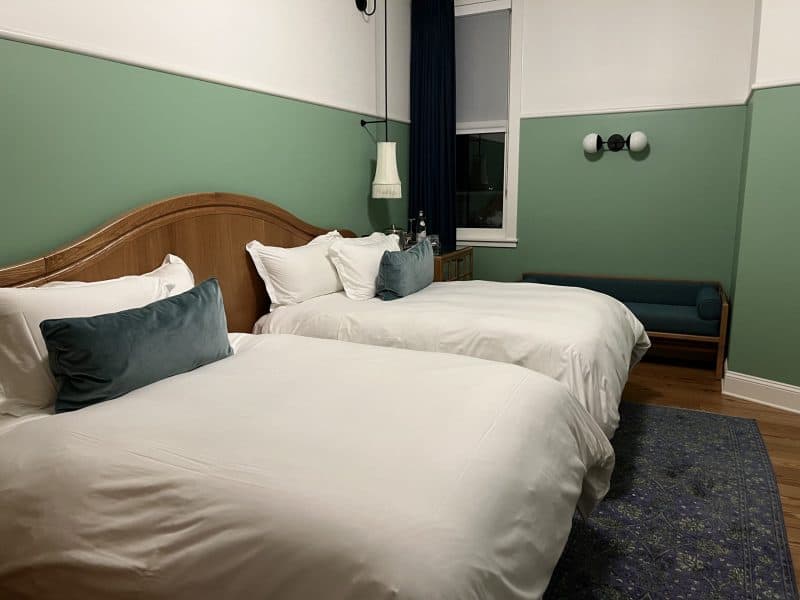 The renovated Drayton Hotel has comfy linens and pillows

There are many things to see and do in Savannah and walking is a great way to get around. I was eager to do the “Savannah 10,000 Steps Walking Tour” that I had found on VisitSavannah.com. With my map in hand and various landmarks outlined on paper, M and I began our own guided tour. (Note: There are optional trolley tours in downtown where you can pay a fee and get on and off the trolley at different stops if you don’t want to walk.)

We walked from one Historic Square to the next, making our mark at half of the 20+ parks. Each one had a story to tell about Savannah’s past, including Chippewa Square named in honor of the American victory in the Battle of Chippewa during the War of 1812. Chippewa also draws fame from the movie Forest Gump. It’s the Square where Forest Gump’s bench was placed during filming. Do you remember the famous quote that Tom Hanks said while sitting on the bench? Hint, hint, it has to do with chocolates. 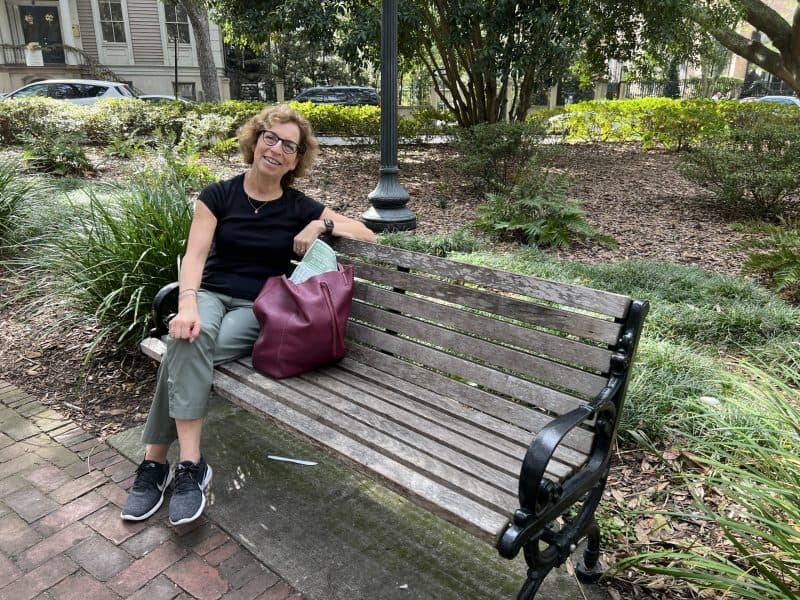 Sitting on the bench where supposedly Forest Gump was filmed

Other highlights on tour included Girl Scout Founder Juliette Gordon Low’s Birthplace (as a former Girl Scout I was glad to see ); Forsyth Park Fountain, designed after the grand fountain of Paris; the restored Cathedral of St. John the Baptist; and the Colonial Cemetery, with graves dating back to the 1700s. 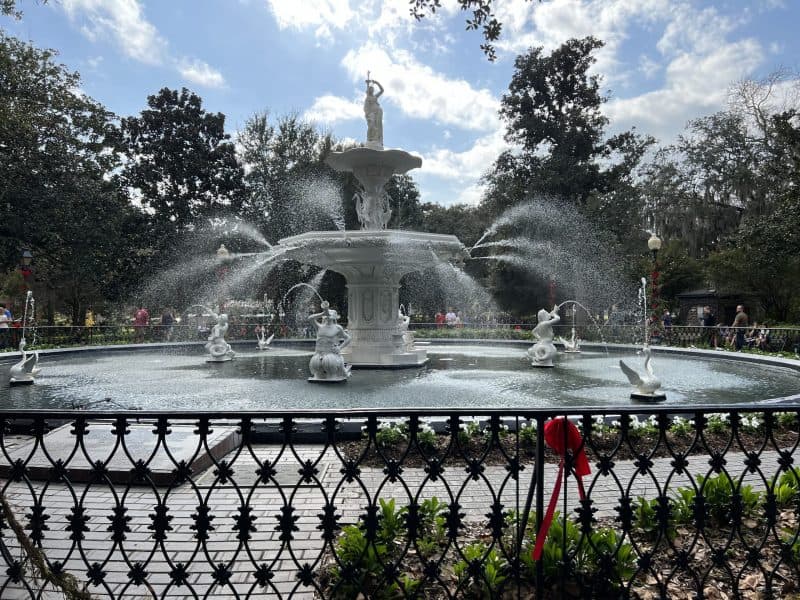 Sampling a taste of Savannah

Both my son D and daughter A had traveled to Savannah earlier in the year and shared their culinary favorites. “Go to The Paris Market for breakfast and The Grey Market for lunch,” said D. “Have lunch at Olde Pink Tavern, one of the oldest mansions in Georgia,” said A.

M and I liked our breakfast coffees and croissants so much at The Paris Market, that we went there both mornings. There were bistro tables for outdoor seating and while waiting for our coffees it was fun to peruse the shop filled with Parisian souvenirs. 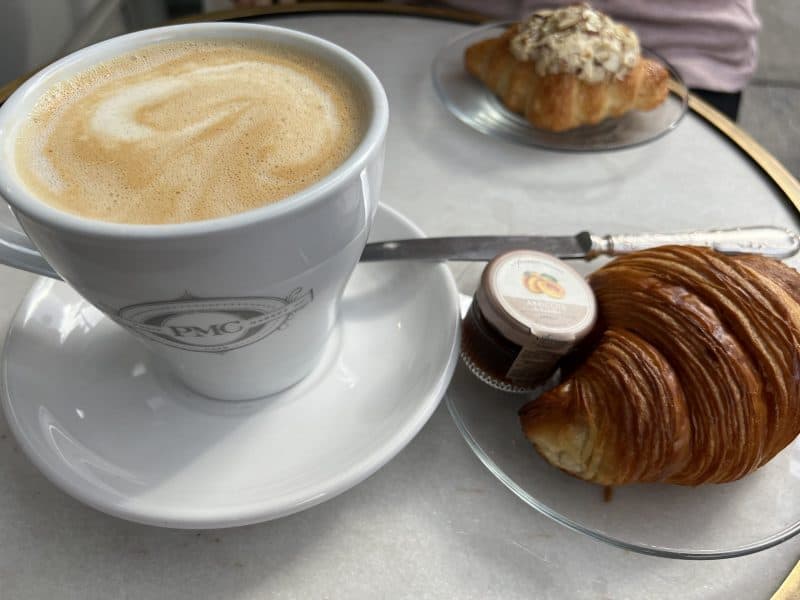 Croissants and cappuccino from The Paris Market

For our New Year’s Eve lunch, I made reservations in advance at Olde Pink House Restaurant. “We’re celebrating our 250 year anniversary,” said the waitress. “Would you like to order a Pink Lady Cocktail?” “Of course,” M and I chimed in. It was time to toast our friendship and our road trip adventures. Being lunchtime, we didn’t get to experience the full menu. Next time perhaps I’ll secure dinner reservations and order Olde Pink’s signature flounder dish. 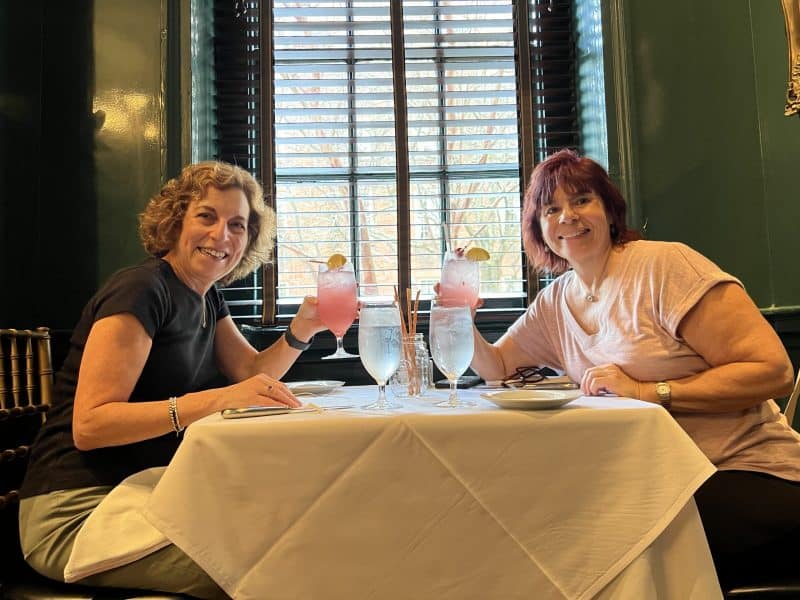 More shopping to do and sites to see

After lunch we continued our walking tour which took us back down Broughton Street, where there are trendy boutiques, restaurants and bars, and souvenir shops. From there we segued to City Walk, another shopping district, and ended our day with a stroll on River Street, overlooking the picturesque Savannah River. There are several historic monuments along the River Walk, including the unique World War II Monument represented by a large split globe. 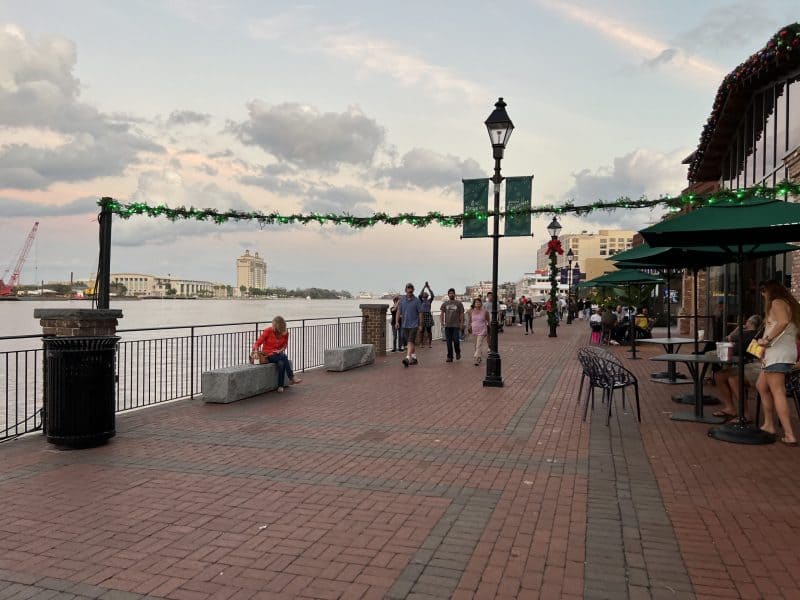 It’s nice to walk along the Savannah River Walk

Ringing in the new year in Savannah

By midnight, we were back at The Drayton Hotel. As the ball came down we opened our champagne, put on our pink Savannah caps and raised a glass to 2022. While I wished we could have stayed longer, I was glad to have seen so much of Savannah in such a little window of time. For sure it’s a place I will visit again. 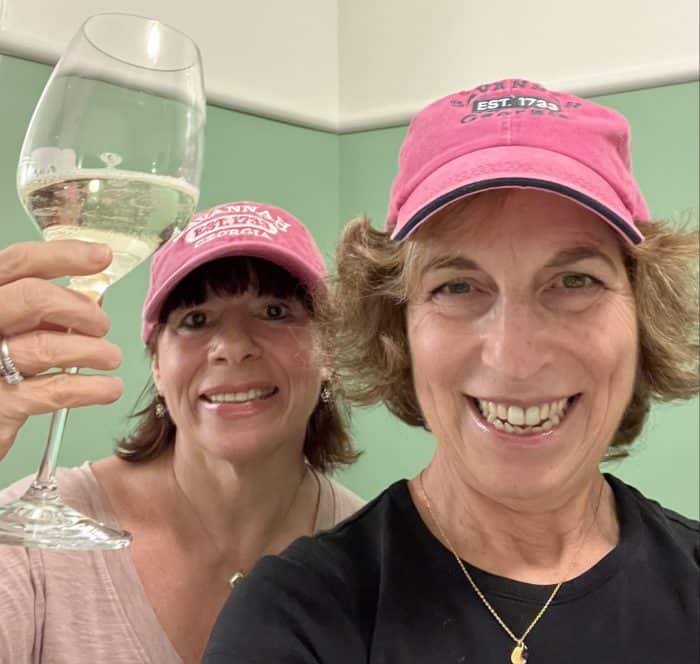 Ringing in the new year in Savannah with a champagne toast

Ooh, ooh, ooh, did you remember that Forest Gump quote yet? He said, “My mama always said, life is like a box of chocolates. You never know what you’re gonna get.” Now that you know the quote, you’ll have to book a trip to Savannah and go sit on that bench in Chippewa Square. Spring is a perfect time to visit.

BTW, as I close out this blog post, it’s hard to believe that my three month stay in Florida has come to an end.  On my return journey this week, I’ll be visiting another Southern favorite – Charleston. This time I’m doing a mother-daughter trip with A. Can’t wait to share my homeward bound adventures soon.

P.S. For more information about planning a trip to Savannah check out Visit Savannah. It’s a great resource from its  tourism board.