Foodies Will Enjoy These 7 Great Places To Dine in Sarasota 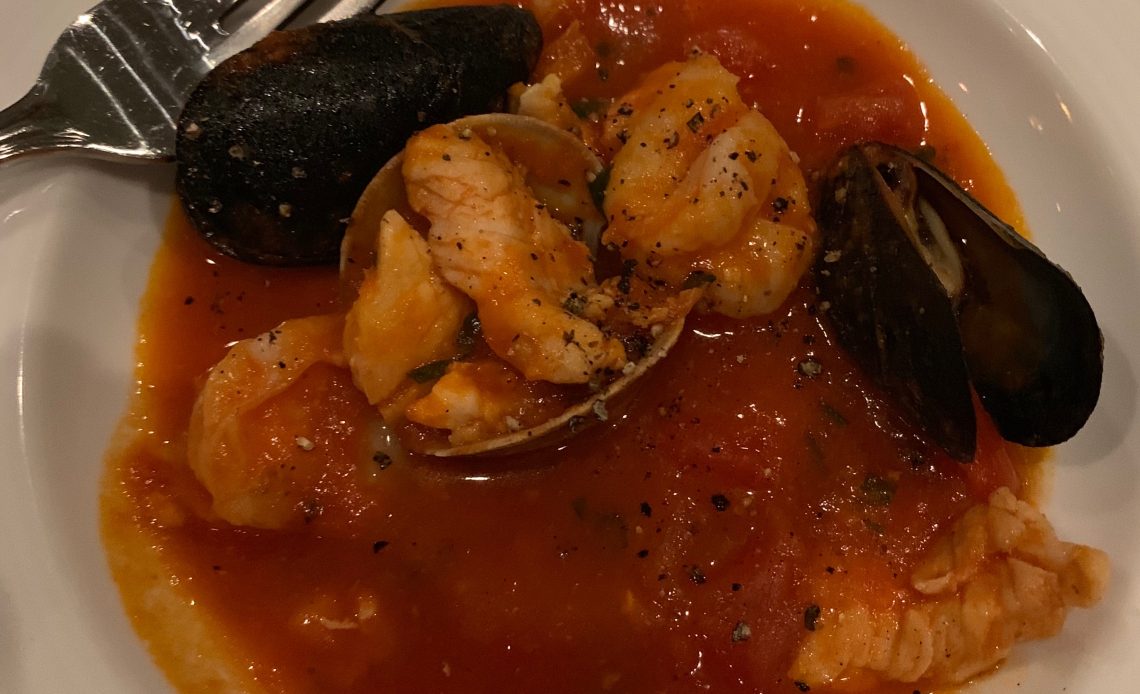 If you read my previous post on Sarasota, you already know I’m a big fan of this part of the gulf coast of Florida. In this post, I’m going to share 7 great places to dine in Sarasota.

Sarasota is a foodie town

There’s a reason why Sarasota was named one of the Best Food Cities in the U.S. by Conde Nast Traveler Readers’ Choice Awards in 2016. While visiting, my boyfriend L and I enjoyed a variety of tasty meals with culinary delights including contemporary flavors and international cuisines. 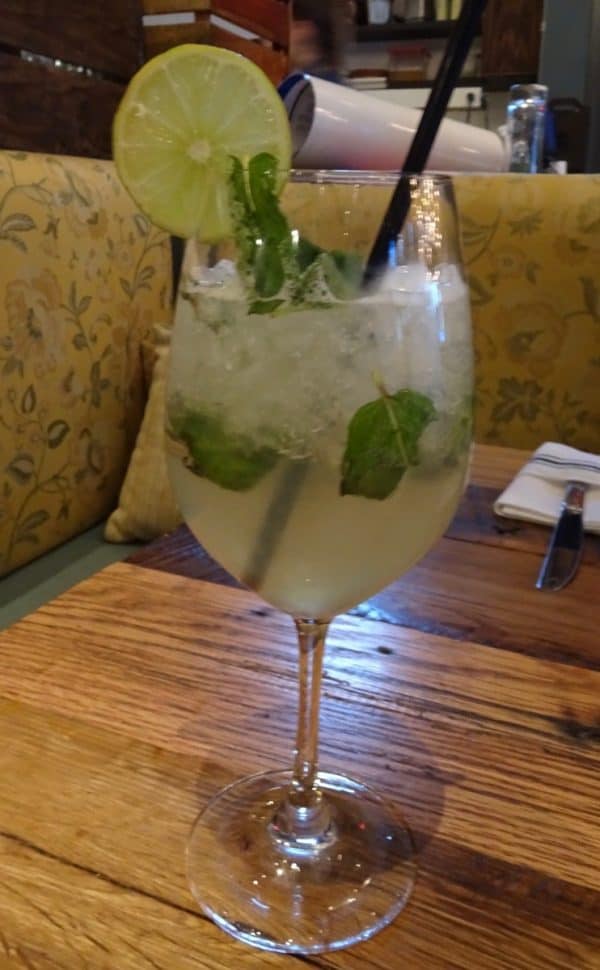 “We care where our food comes from,” said Dave, the managing partner. He posed for me in front of a real life lettuce wall in the dining room. According to Boca Sarasota’s website, “Boca’s menu is based on the local food movement and sources ingredients from nearby farmers and specialty food purveyors wherever possible.” 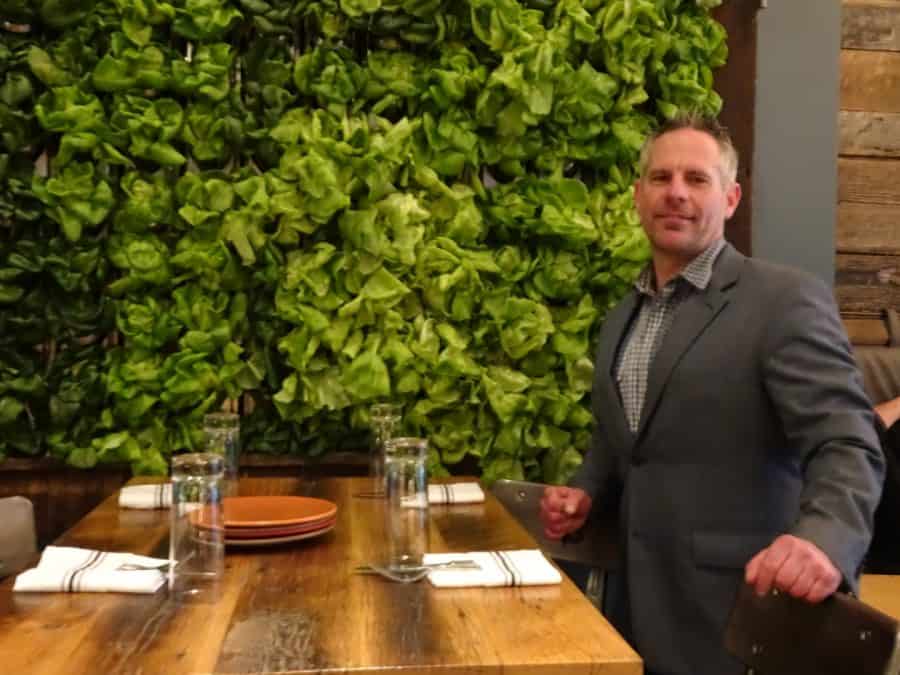 Dave is the managing partner of Boca Sarasota

We sampled zucchini fries, fried green tomatoes, and a cheese and charcuterie plate. I ordered a refreshing cocktail called “Hello Beautiful” made with lunazul, reposado, solerno, fresh mint, lime, sugar, and champagne. Everything was so good, so good, so good. 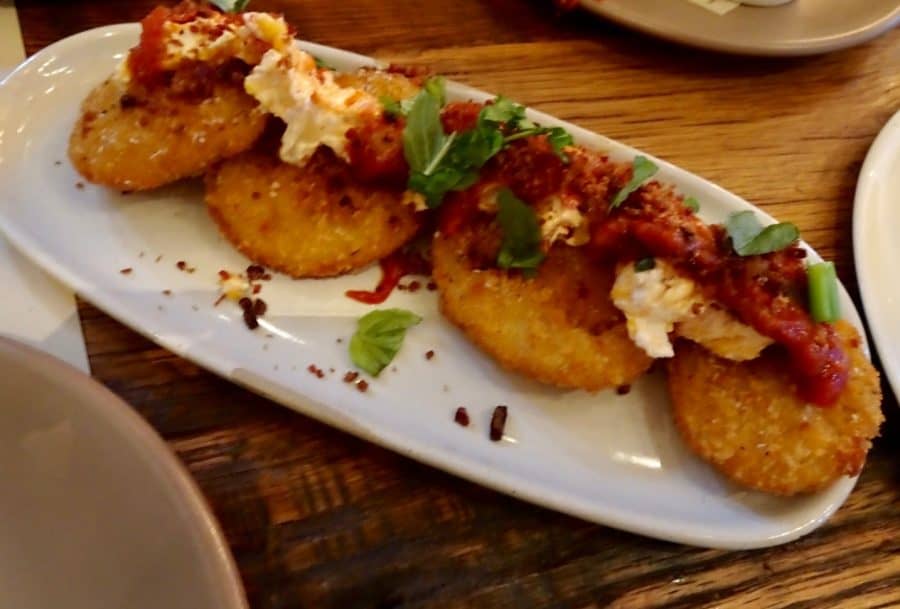 Have you ever had fried green tomatoes?

On Saturday afternoon, L and I drove to Longboat Key, on the northern end of Sarasota County. It was about a 20 minute ride from downtown. We walked the beaches and stopped for a bite to eat. My friend B had suggested The Lazy Lobster. Unfortunately, it was closed for lunch since it was too early in the season. Instead we went to the Blue Dolphin Cafe, where the locals hang out. It’s a diner where you’ll get homestyle salads at noontime. We didn’t notice many restaurants on Longboat Key. There are lots of condos and beautiful private residences and clubs that likely have their own dining facilities. Blue Dolphin is open daily for breakfast and lunch and serves Friday evening dinners during the winter season. 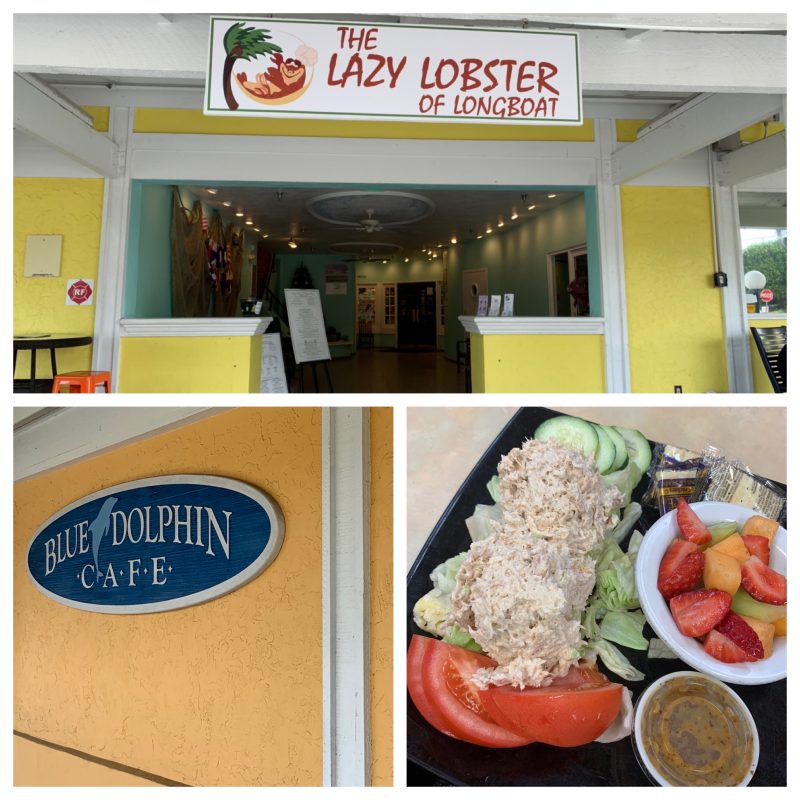 If you want to treat yourself for a special dinner during your vacation make reservations at Shore, a trendy restaurant in St. Armands Circle. It was favorably reviewed by Tampa Bay Times food critic Laura Reiley in her recent article in Sarasota Magazine. We decided to book a table for Saturday evening. (Note that I made a reservation in advance as this is a popular place.)

It was a warm evening and we dined al fresco. We selected the rustic rosemary olive bread starter with smoked salmon and herb and shallot goat cheese spreads and spinach eggplant dip. For my entree I ordered the towering lobster, shrimp & crab cobb salad. What an amazing presentation piled high and loaded with seafood. I would order this salad again except request different greens — I’m not fond of arugula. L liked his Key West shrimp & scallop lemon risotto.  Next time I want to try one of Shore’s signature cocktails like the Blood Orange Margarita. 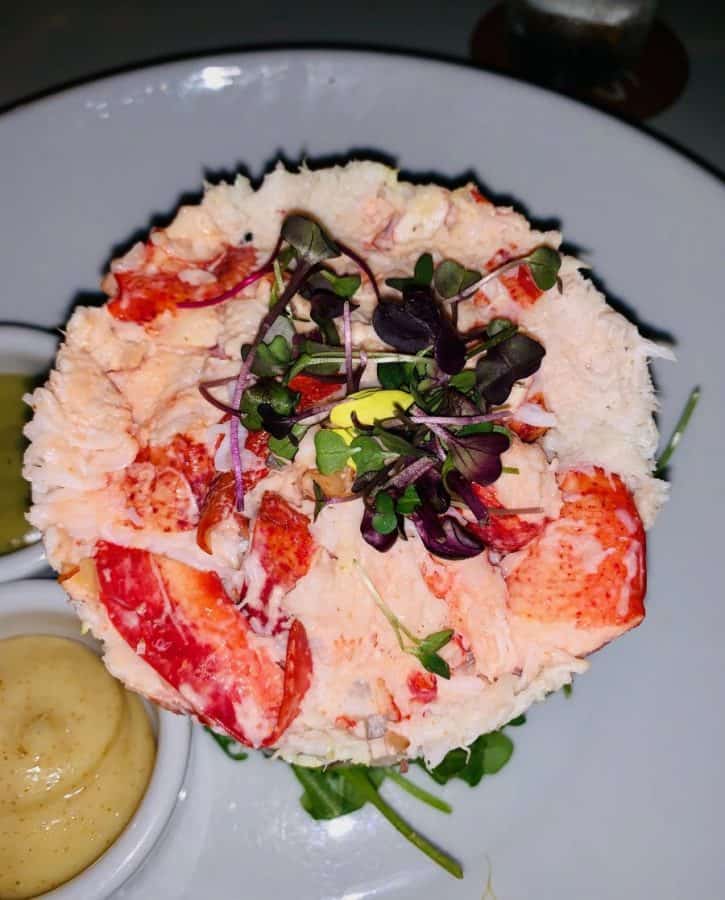 Perfect cafe for a cup of joe

On Saturday morning, we walked into town for a foodie experience at the weekly Farmer’s Market. It was bustling with vendors and shoppers. We followed the crowd for a cup of coffee and scrumptious baked goods at the award-winning Pastry Art Bakery Cafe. It’s a tiny storefront with latte lines that run out the door. The coffee was well-brewed and the raisin bran muffins oversized. I left my gluten-free diet behind to partake in this breakfast sweet. 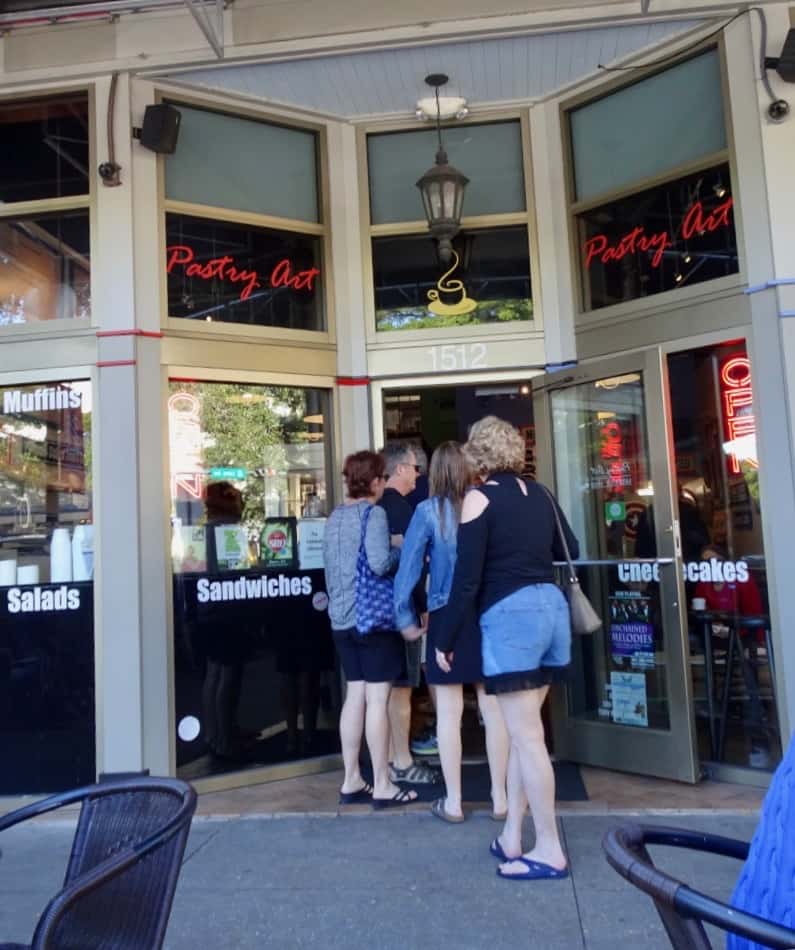 On Sunday morning, we headed south to scout out Venice Beach. Its downtown includes a cute strip with a few casual eateries and shops. “It looks like the Upper Crust Cafe & Bakery is the place for brunch,” I said to L as we gave our name to the hostess. We waited right next to the cases that are filled with all kinds of pastries —  fresh baked scones, linzer tarts (my favorite) and wedding cookies. The confections are hard to resist.  The Cafe’s dining room has an old-fashioned feel with mix-and-match seating. The coffee was hot and the omelets well done. 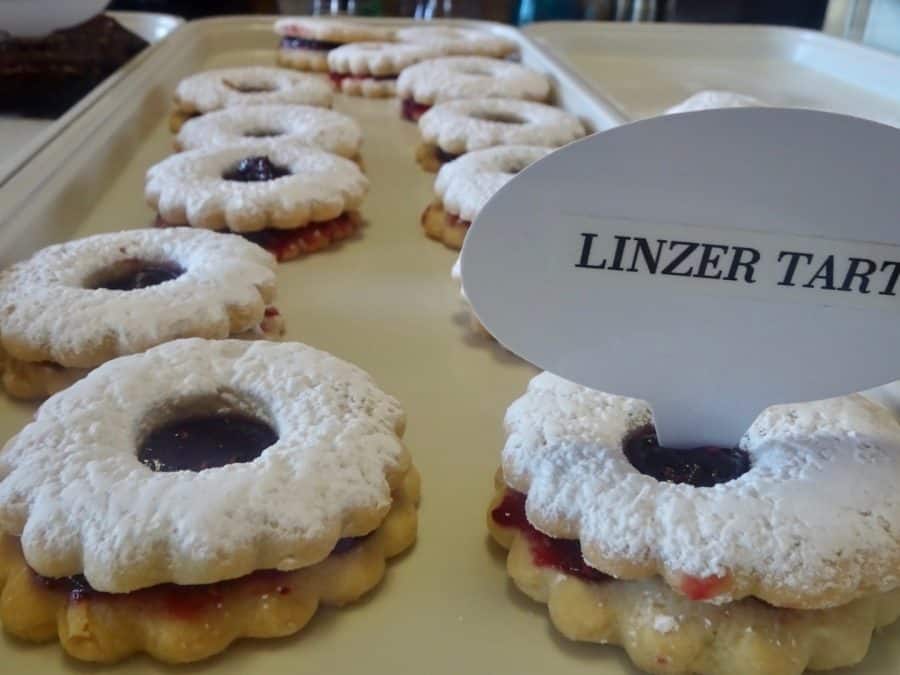 Both L and I like Greek food so when we saw the sign for Blu Kouzina Mediterranean restaurant on our second night in St. Armands Circle, we wandered inside. Blu Kouzina stands by its food philosophy which says that “all plates are prepared with top quality, fresh ingredients using only our own cold pressed extra virgin olive (EVOO) from our more than a hundred year old olive groves in Greece.”

That velvety smooth EVOO is likely what enhanced our meal. We began with a traditional Greek salad and followed with Moussaka for L and stuffed veggies for me. Blu Kouzina’s feta cheese is also imported from Greece. The food was so good, so good, so good. We brought the leftovers back to our bungalow for next day’s lunch. 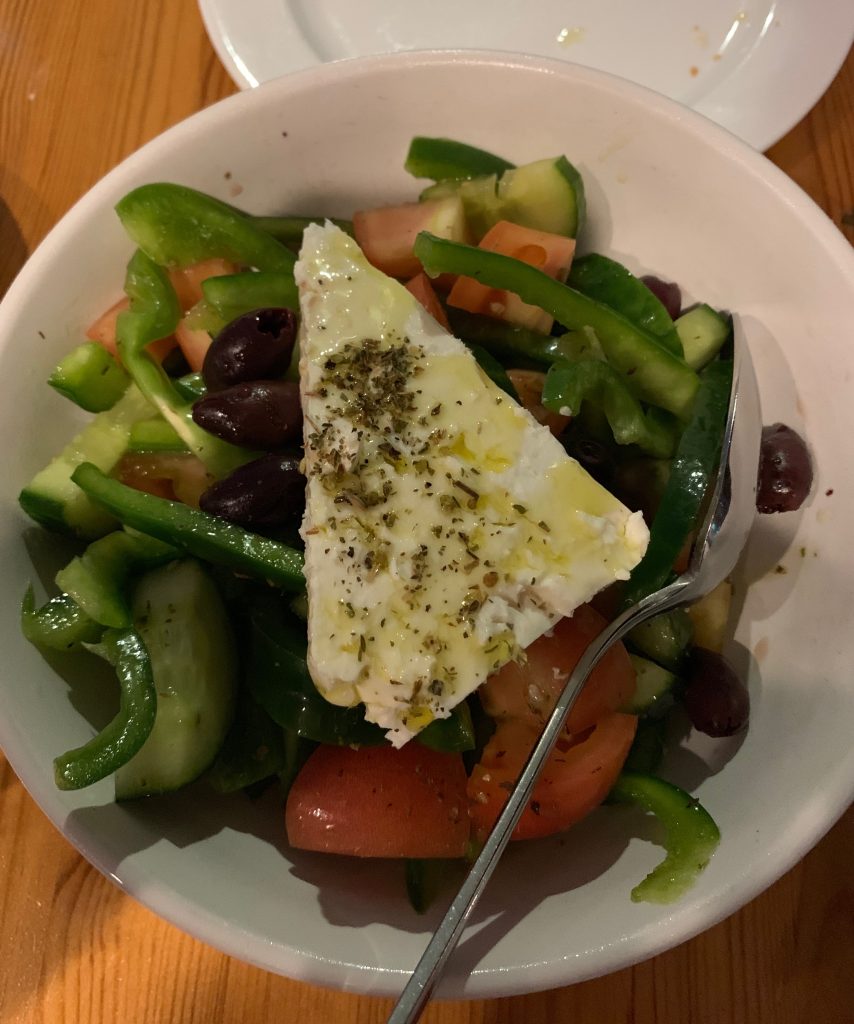 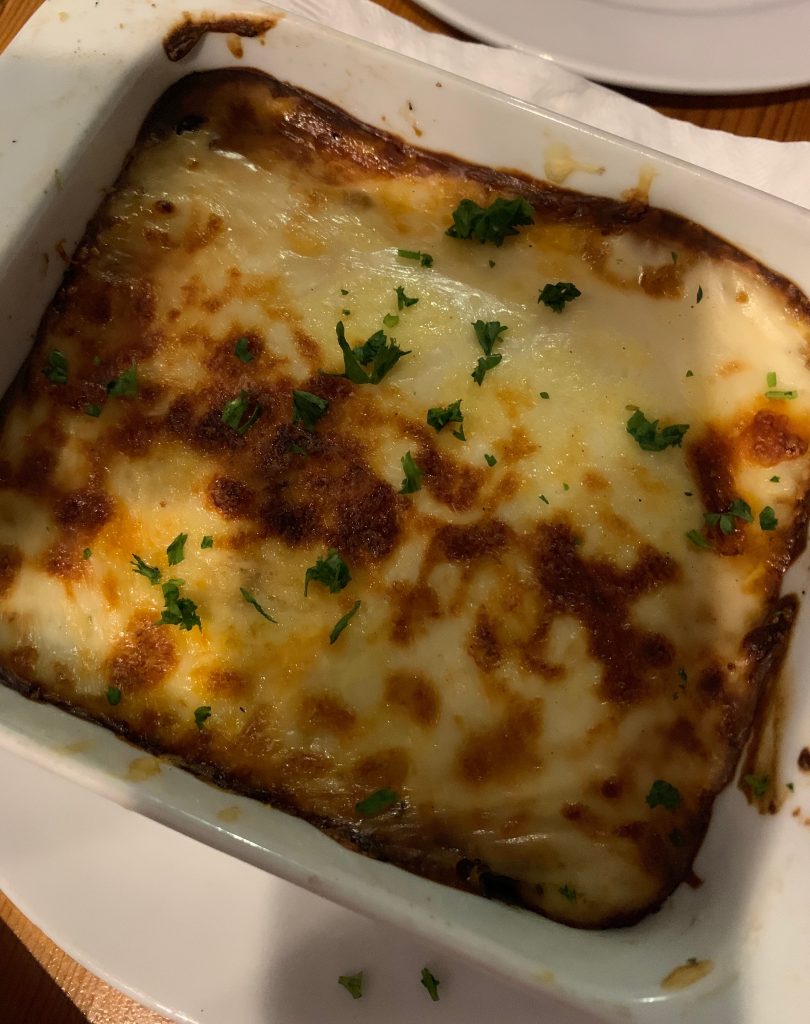 On Monday night, we went Italian, securing a reservation in advance at Sardinia. The restaurant is Victor Hazan’s favorite restaurant in Sarasota. Victor is the husband of the late chef Marcella Hazan. While the restaurant is located in a tiny strip mall (that we almost passed by), the food is anything but unassuming with a menu that is genuine Sardinian. That’s because chef Dino Carta was trained in Sardinia and imported a wood-burning oven for his kitchen. He bakes traditional Sardinian bread daily, as well as  braised aged meats, and fish. The food is cooked in the oven as it typically is done in Sardinia.

Our carbohydrate count was likely over the top with the delicious basket filled with breads and crisps. We used the crusty slices to soak up the exquisite tomato sauce in our cioppino appetizer. Both L and I passed on pasta after eating so much bread and opted for fish entrees from the wood-burning oven. 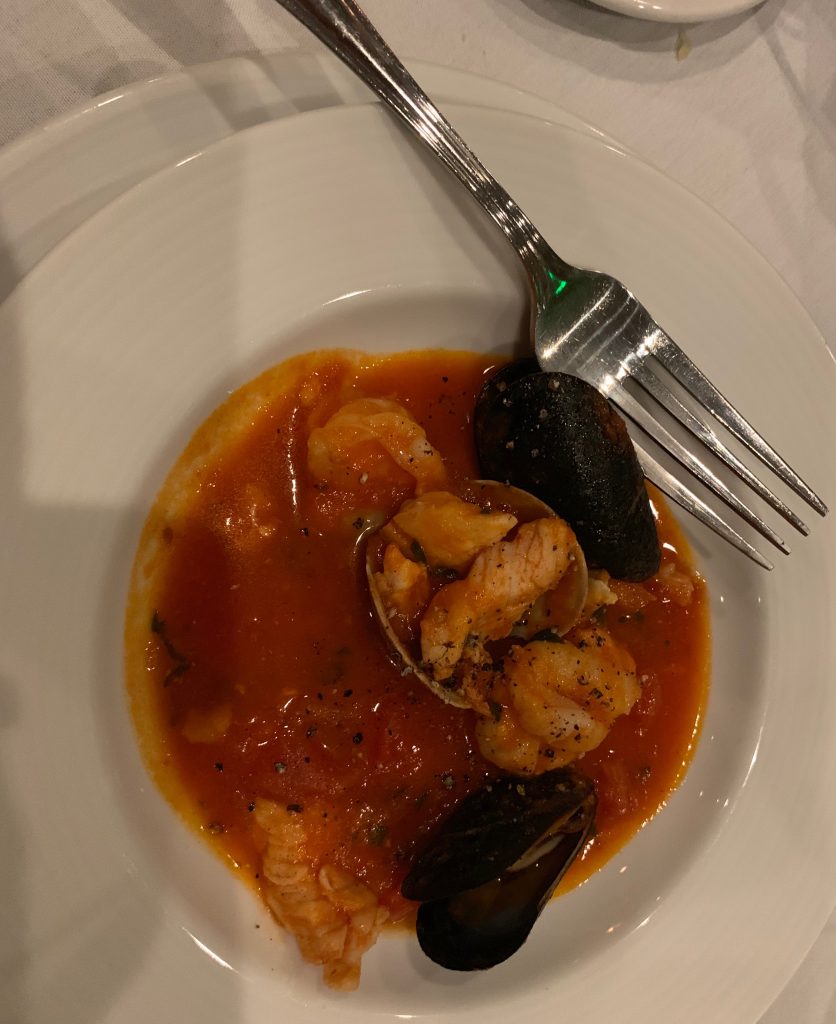 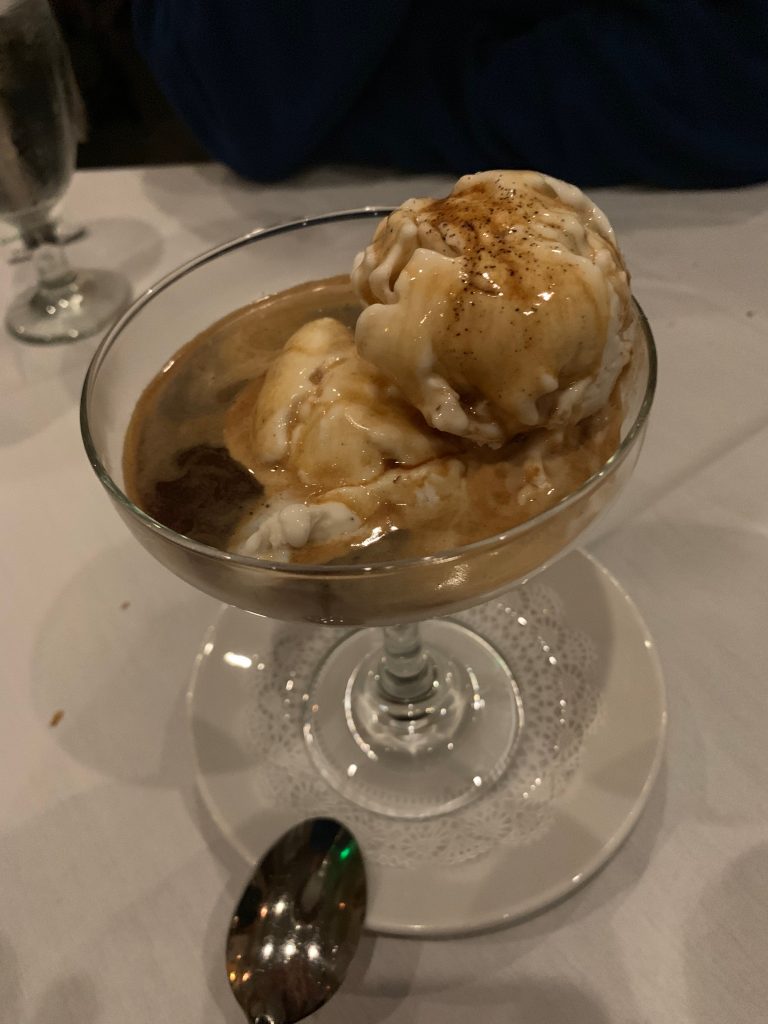 “Would you like to try our gelato?” asked the nice waiter. “Ooh, ooh, ooh, we didn’t have pasta so I think we should try a dessert,” I said to L. We couldn’t resist the Gelato Affrogato – a honey gelato with espresso poured on top. OMG, it was so good, so good, so good.

There are so many more great places to dine in Sarasota — we didn’t have enough days or room in our tummies to taste them all. We tried to get into Owen’s Fish Camp on our last night but it was a no go. From what we saw when we arrived at 7:00 p.m. it appears that if you aim to eat here you better dine early, like when it opens at 4:00 p.m. Otherwise you may be out of luck.

Another spot that we heard about was Michaels On East, Sarasota’s only AAA Diamond Award Restaurant. Sounds like it’s popular for special occasions. Again, I’m adding it to my “future places to eat during my next visit to Sarasota.” Hear that L, I think we need to start planning! 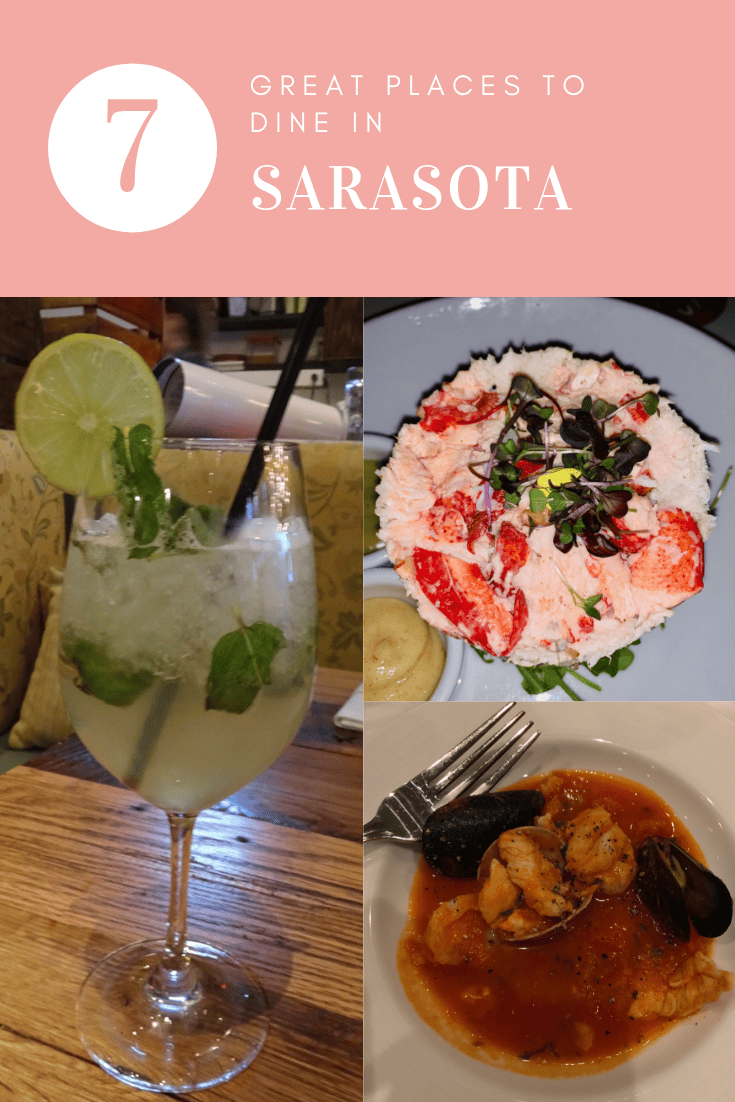