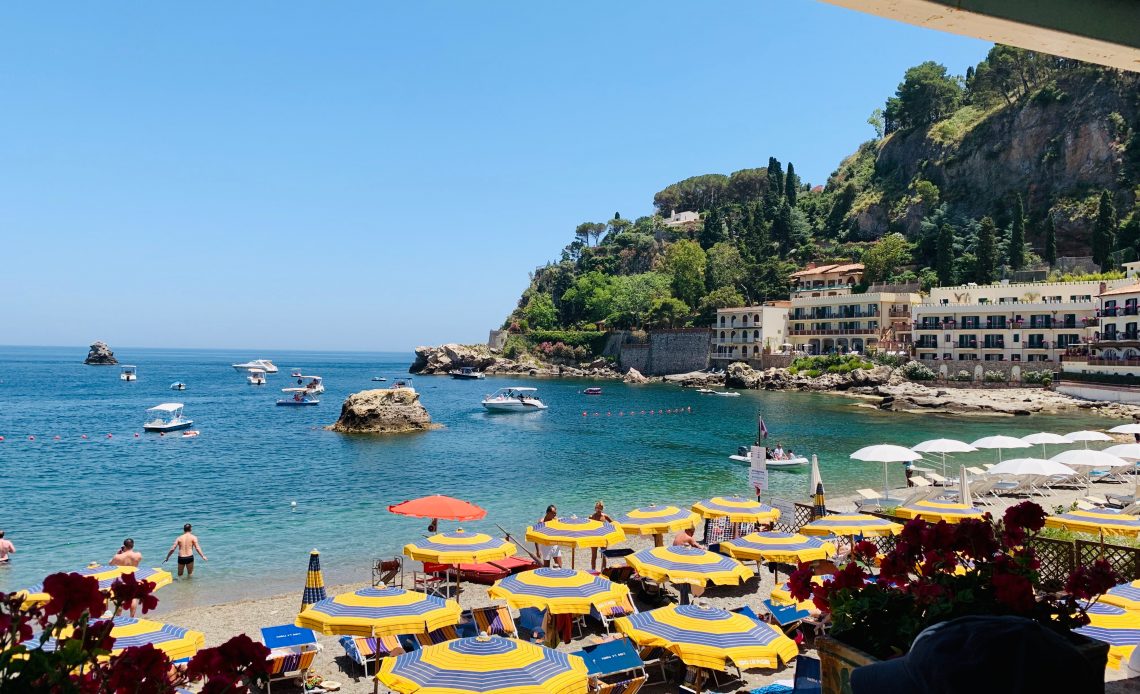 Ciao in Italian can mean “hello” or “goodbye.” For these purposes ciao means goodbye as I share my final day in Taormina, one of Sicily’s most quintessential resort towns. It was a grand farewell for what was a wonderful first-time visit to this vibrant Italian island. If you read my previous posts, you know that I was traveling on a girls’ trip with my sister N and my daughter A and her friend M. Note: If you haven’t read my previous Sicily posts, you can find links below. 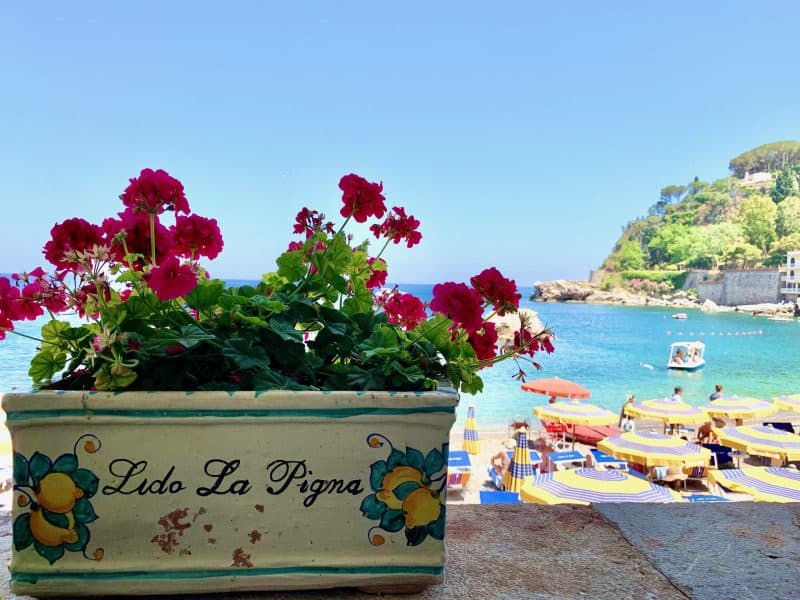 The Symbol of Sicily

Before we get to the beach, since this is my last Sicily post, I thought I would provide a brief history lesson about the Trinacria symbol of Sicily, which BTW is female. In Taormina, Trinacria is prominently displayed in ceramic tiles that line Villa Le Terrazze. That’s the villa where we stayed in Taormina. 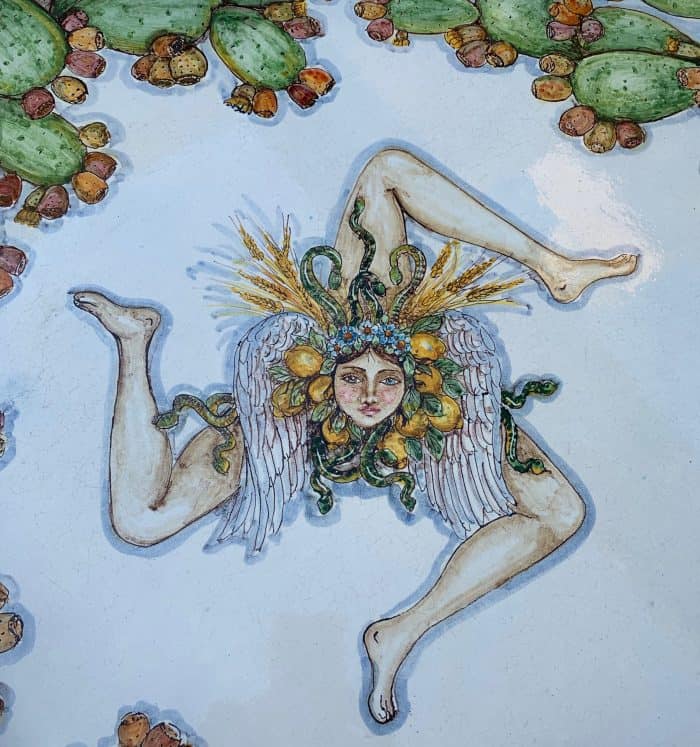 Trinacria is the ancient symbol of Sicily

According to Excursions Sicily: “In the ancient mythology, the Gorgon is a mythological figure who was each of the three daughters of two Gods of the sea. (This is confusing but read on and you’ll learn more.) The three daughters were Medusa, Stheno (“strong”), and Euryale (“the large”). Medusa was mainly known for her ability to turn mortal men to stone with one gaze. But the goddess was also known for her help to fight the forces of evil. In the Trinacria, the head of Medusa stands in the centre.

In the Symbol of Sicily, the head of Medusa appears with entwined serpents hair and ears of corn. The ears of wheat represent the symbol of the fertility of the land.”

Okay that’s enough history, let’s get back to the beach.

“Here are some beach towels. However, don’t walk down to the beach, take the funicular” said Carla, the manager at Villa Le Terrazze. So glad for Carla’s advice. It was a long way down and I don’t think our legs would have carried us that far after scaling Mt. Etna the day before. Following a leisurely breakfast at the Villa (note that breakfast is included each morning), we donned our swimsuits, packed suntan lotion and reading materials, and readied for our Sicily adventure to Lido La Pigna Beach. 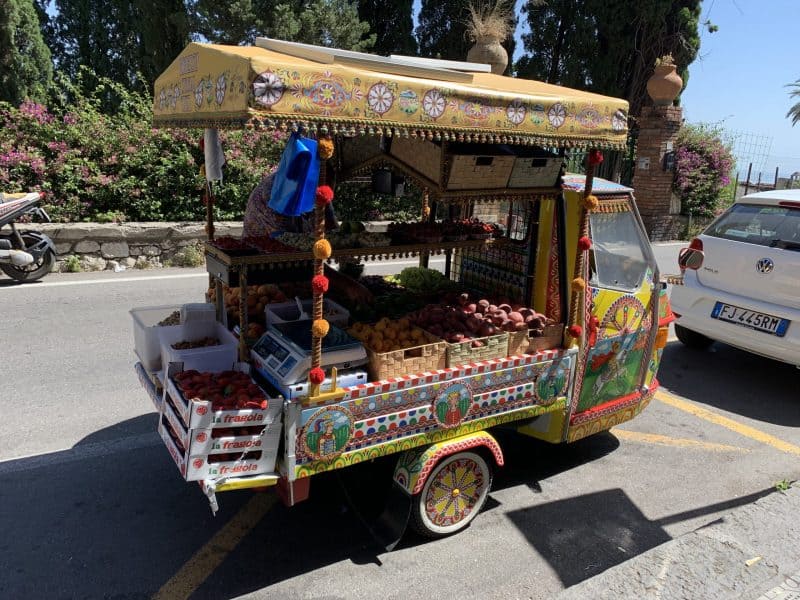 We passed colorful fruit carts on the road to the funicular

The Villa’s shuttle dropped us near the edge of town and we proceeded on the path to the funicular. The cable cars were crowded. We hopped aboard when told. Down, down, down we went. Ooh, ooh, ooh, Carla was right. It was a long ride down. 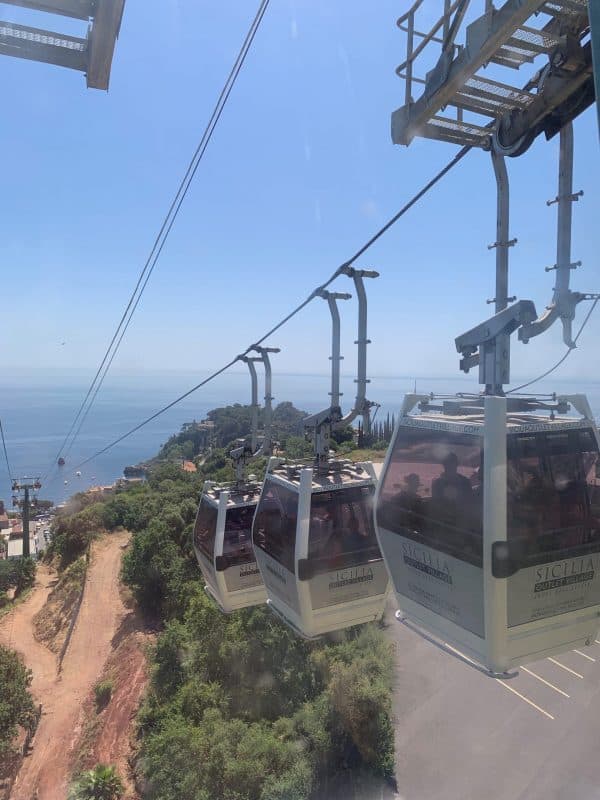 Going down to the beach via the funicular

Once off the funicular we noticed that there were more stone steps to conquer to actually get to the beach. We maneuvered carefully, especially since there were no guardrails. Visions of Mt. Etna mountains flashed before us. Would N and I make it down the steps? We moved slowly and let others pass us by. Whew, those stairs were steep!

Lounge chairs and umbrellas were easily available for rent from the La Pigna Beach Club and are a must on a hot summer day. Lido La Pigna Beach is rocky underfoot and the pebbles aren’t easy to walk on. Before lunch at the hotel’s restaurant, N and I decided to leave our flip flops by the edge and cool off in the Mediterranean  — it was well worth a dip after sitting in the sun. It’s also fun to wade in the clear waters and hunt for colorful sea glass to wash up. 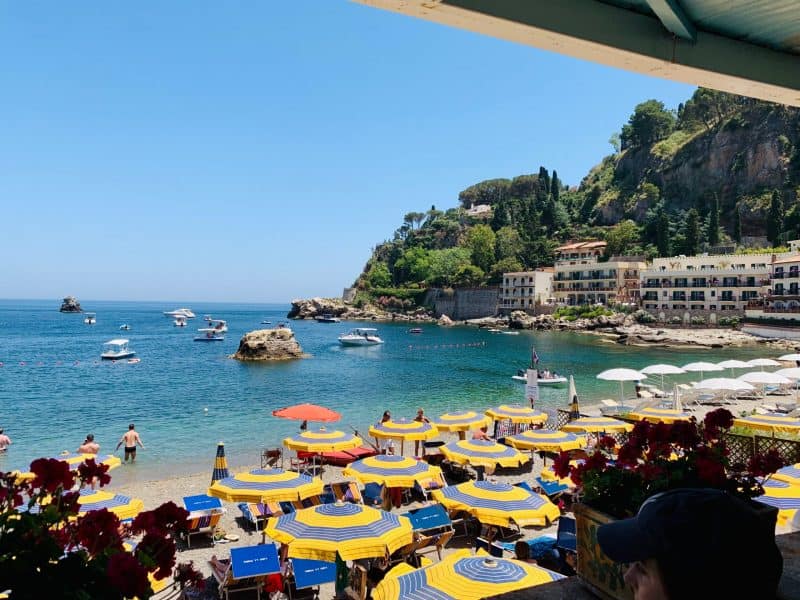 The Mediterranean waters are clear and cool

By about 15:00 we decided to make the trek back up the steps and up the funicular. We wanted to make sure we had enough time to get ready for our farewell dinner.

Savoring our best dinner in Taormina

“We should go to Ristorante al Saraceno on our last night in Taormina,” said A during the early planning stages of our trip to Sicily. “The restaurant is supposed to have great food and incredible views.” She made sure to make a reservation in advance. 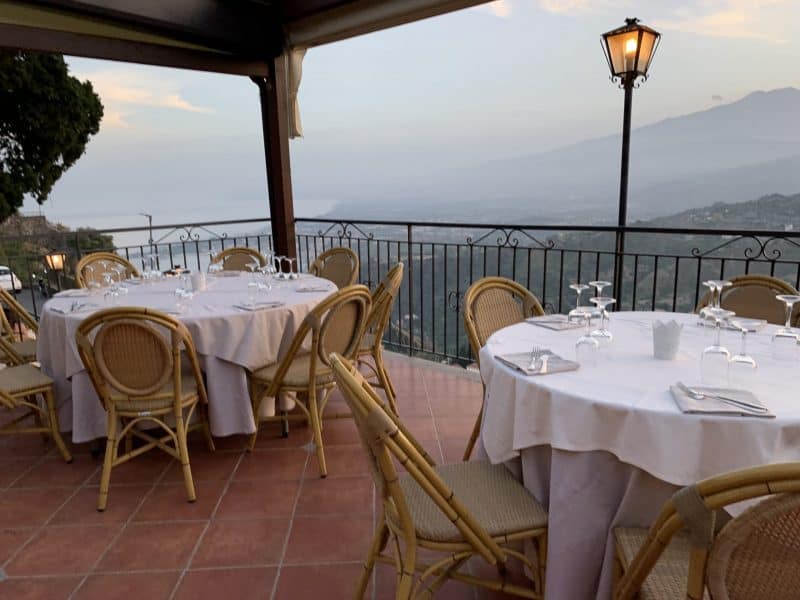 As the sun set over Mt. Etna and the surrounding mountains and countryside, we prepped for our farewell meal. Then we made our last trek up the hill to Ristorante al Sarceno. Up, up, up, we went, this time in our dress clothes. Another steep hill, but well worth the ascent. 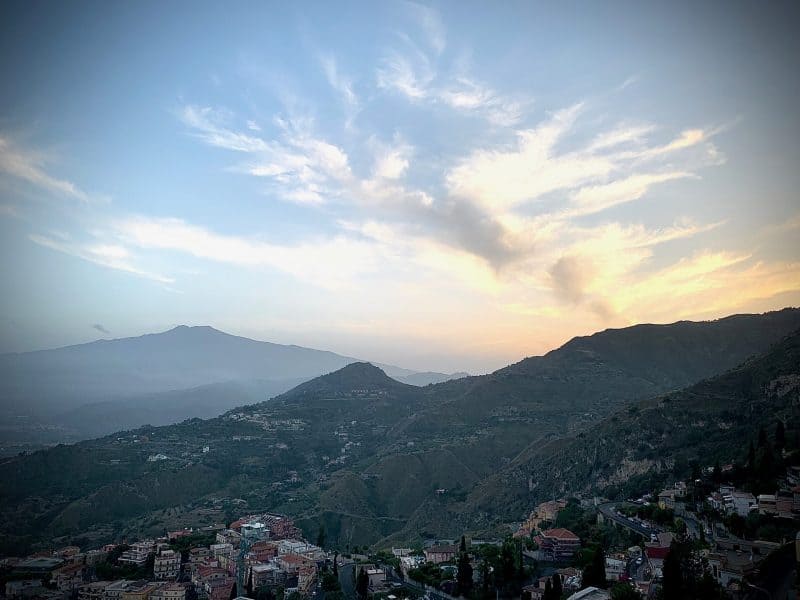 It was a perfect evening. The views from the restaurant were indeed magnificent. The lights of the city sparkled as the sky grew dark. We dined on Margherita pizza, antipasti, and Pistachio Crusted Sea Bass. We toasted our time in Sicily with a bottle of Persecco. We shared Tiramisu for dessert. What a grand goodbye it was. 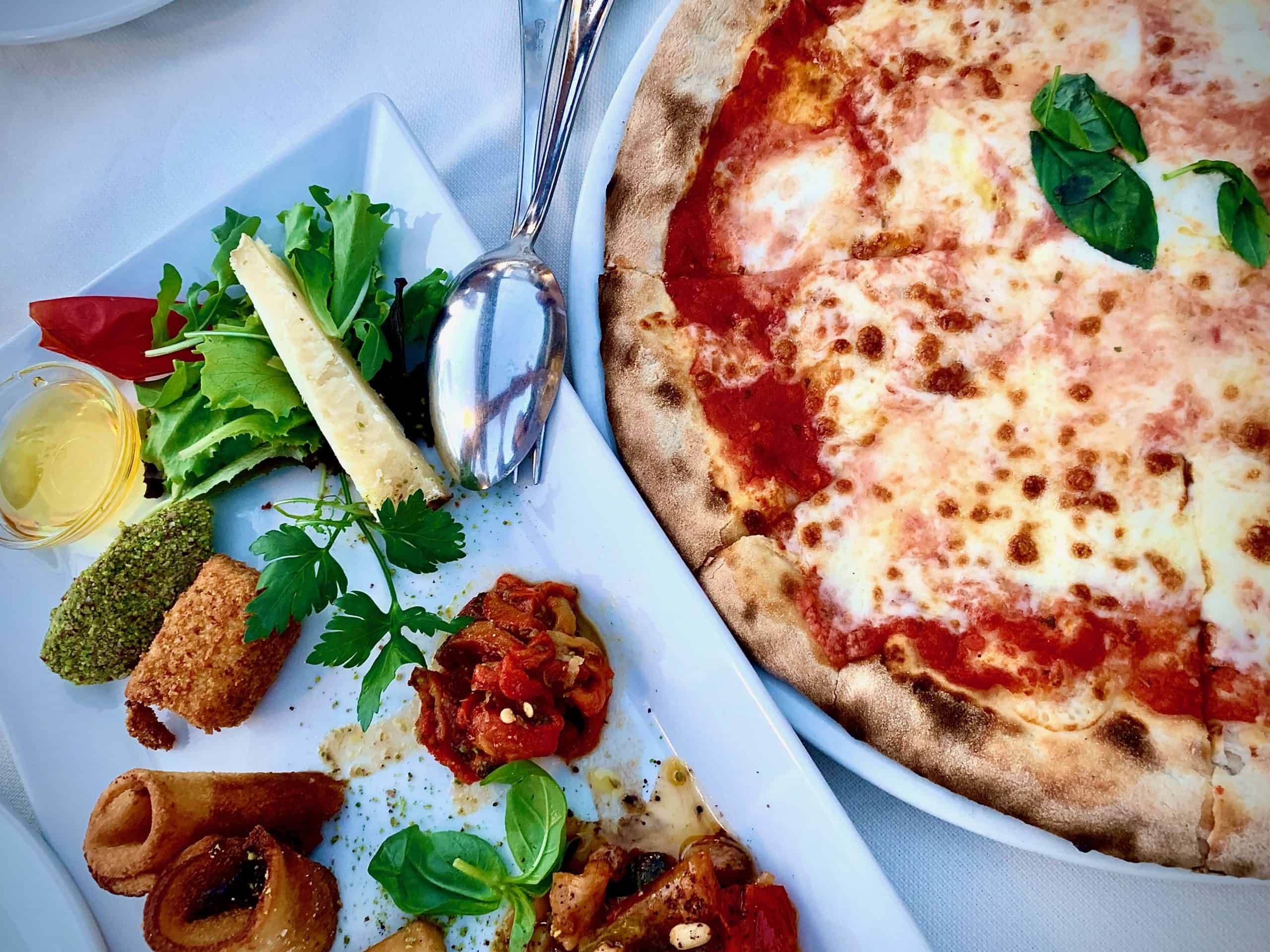 We dined on antipasti and pizza to start

Our first-ever visit and girl’s trip to Sicily was a resounding success. Tomorrow we would be heading to Catania and then flying back to London. On Sunday, N, A and I would be traveling home to our respective states and M would be going back to her new home in Paris — lucky M. 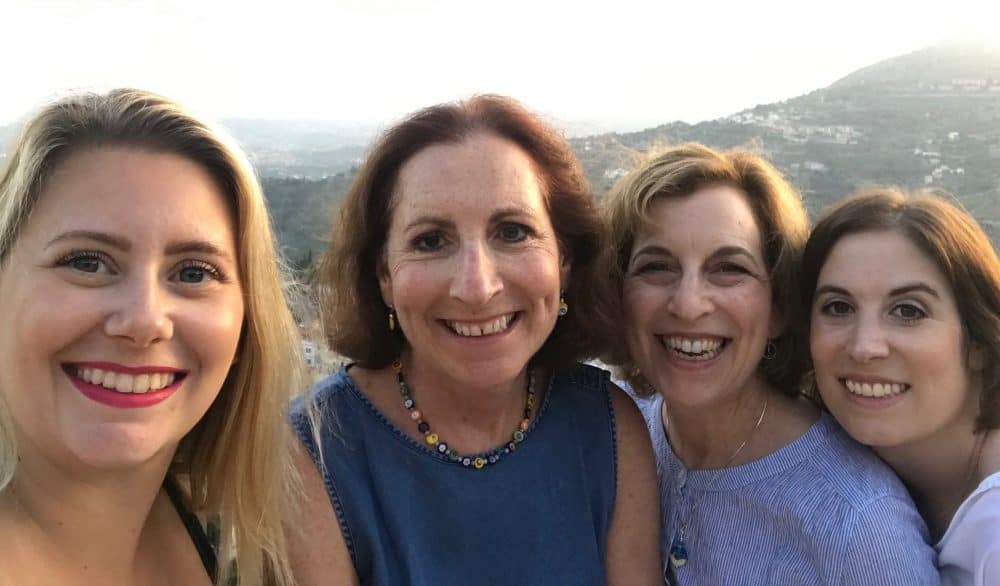 How much did we enjoy our girls’ trip to Sicily? I think this selfie says it all!

So glad for the memories. So glad I can share them with you. If you ever get a chance to go to Sicily, go, go, go. It’s not so easy to get to, but well worth the journey.

P.S. In case you missed my previous posts about the London part of my trip and my Sicily posts from Palermo and Cefalù, and earlier posts about Taormina, links are below:

♥ Ciao! Join Me For A Fabulous Street Food Tour of Palermo

♥ A Stopover in the Charming Sicilian Village of Cefalù

♥ My Travels to the Charming Resort Town of Taormina

♥ Are You Ready For An Adventurous Hike Up Sicily’s Mt. Etna?