Ciao! Join Me For A Fabulous Street Food Tour of Palermo 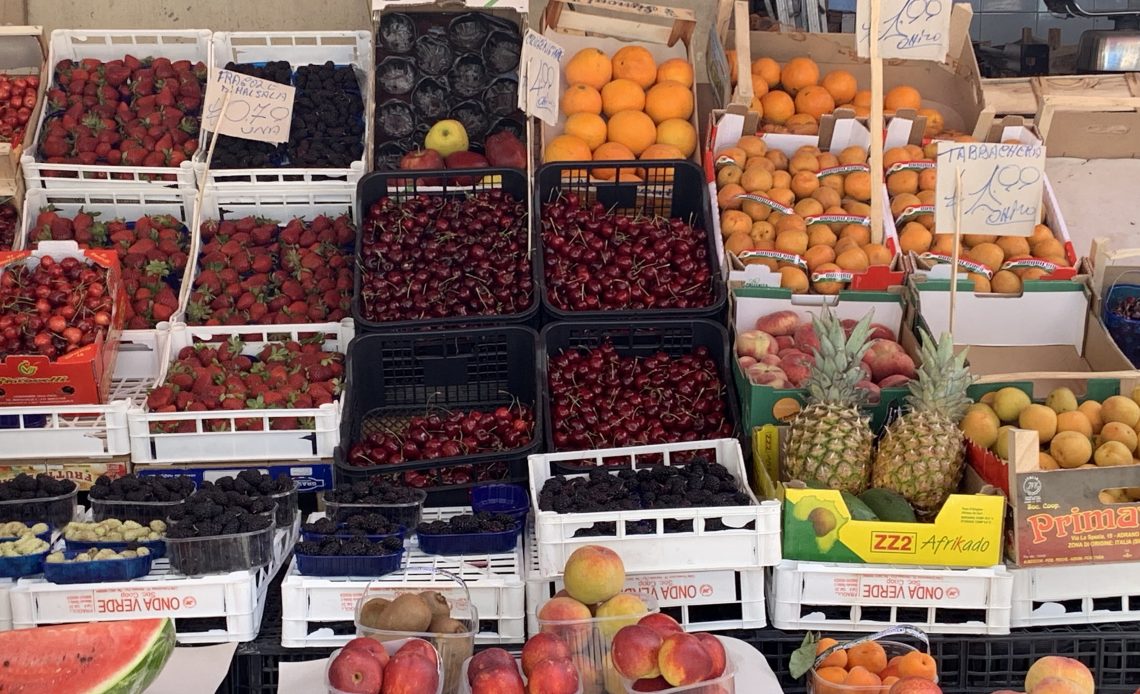 Are you ready to join me for a fabulous street food tour of Palermo? I’m going to take you through the authentic food markets as we venture out with our guide Salvo from Streaty Street Food Tours. The three-hour tour was one of the highlights of my time in Palermo during a girls’ trip to Sicily with my sister N, my daughter A and her friend M.

As I mentioned in my previous Palermo post, I’ve wanted to go to Sicily ever since reading Mimi Sheraton’s book, 1000 Things To Eat Before You Die. Mimi says, “Even in Italy, where almost every city has its share of dazzling outdoor food markets, Palermo shines…any food loving traveler should set aside several mornings simply for its three stunning street markets, which wind through alleys in the center of the city.” 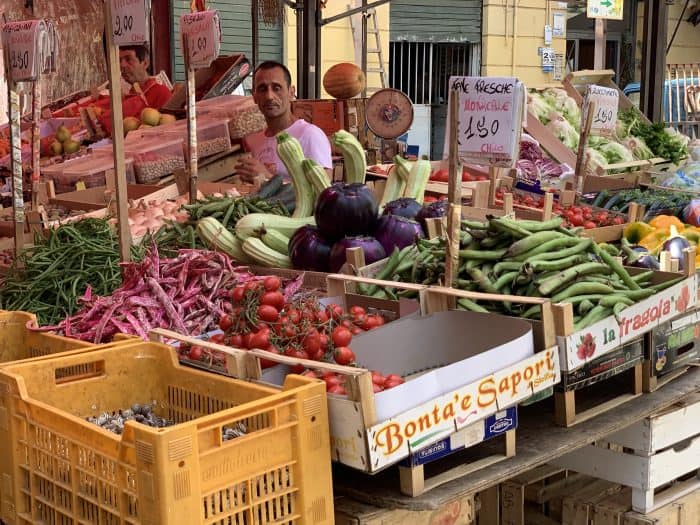 Are you ready to experience a Sicilian outdoor food market?  Let’s go…

We’re meeting our fellow foodies in front of Teatro Massimo, Italy’s largest opera house in the center of the city.  Salvo will distribute passports to be stamped after each tasting. 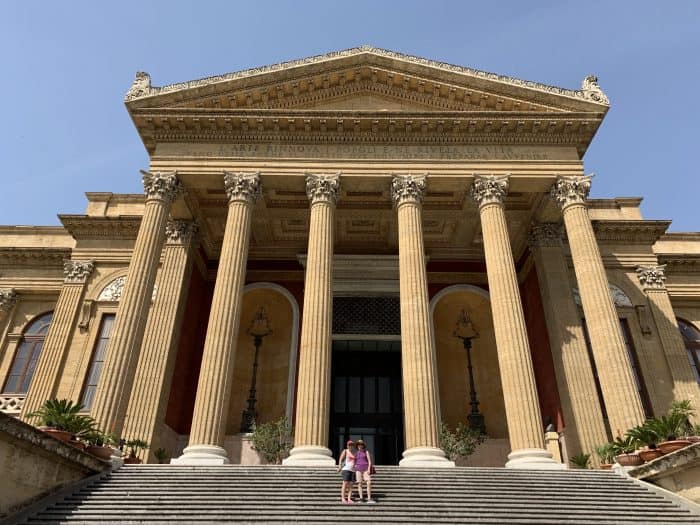 Be confident when crossing the streets

As we walk to the Il Capo market, Salvo advises us on how to survive crossing a busy Palermo street, which is literally like darting through an African safari. “Look confident when crossing the street. Don’t put your hand out,” says Salvo. “You look the driver in the eyes so they know you’re confident.” Whosh, glad we got across that last street, it was pretty dicey. 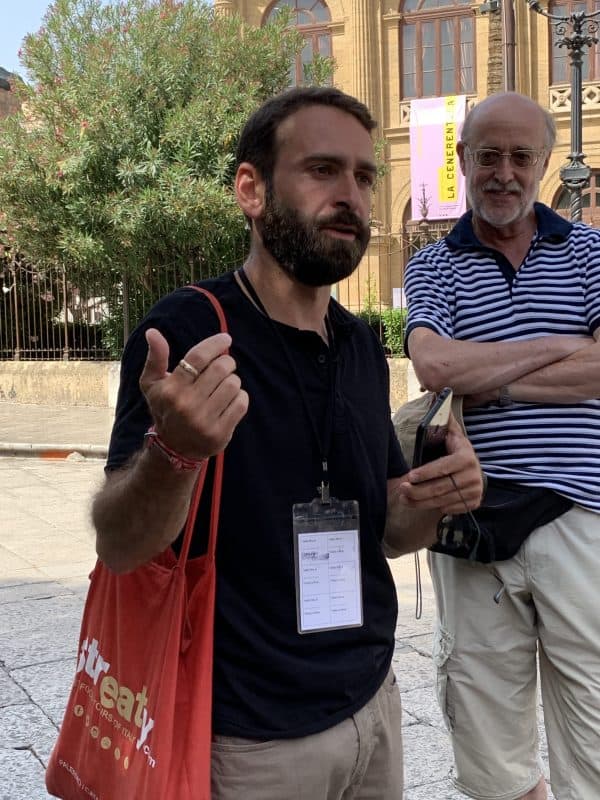 Our guide Salvo grew up in Palermo

Salvo notes that Palermo is one of the oldest towns in Italy. It was a natural port founded by Phoenicians in the 8th century BC. “Palermo is a Greek name meaning old port,” he says. “The Vikings came here to bring Sicily back to the Christian world. They made Palermo a capital town. Palermo had a big mix of different nationalities including Greek, Arab, Jewish and Norman.” When the Normans arrived they named the highest part of the town Il Capo. Hence the market got its name.

“Food is part of our history,” says Salvo, who grew up in Palermo. “Palermo street food is workers’ food.”

How to shop in a Sicilian food market

The markets open very early in the morning and stay open until around 2:00 p.m. or 14:00 European time. “It’s best to go early, says Salvo, providing tips on how to shop: 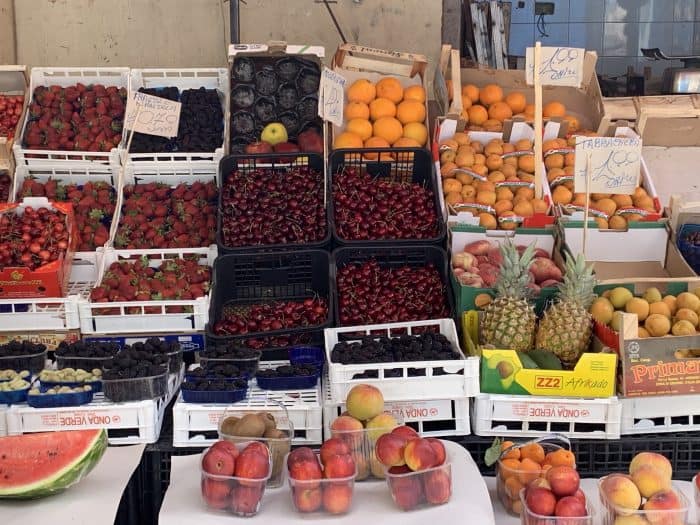 Let the vendor pick out your fruits and veggies

♥ “Don’t buy fish on Monday because the fish is from Saturday. Some of the fish vendors are closed on Monday.”

♥ “Don’t buy from the first vendor, they are the most expensive. Go deeper into the market and prices will be cheaper.”

♥ “Don’t touch the food. Tell the vendor what you want and he will pick out the ripest piece.”

♥ “Sicilians use their hands and facial expressions to communicate. Mothers bite their hand so they don’t hit their children. When they flick their eyes back and forth it means no,” he says. These are important cues to watch as we negotiate with vendors to buy spices like saffron and oregano.

The streets of the markets are filled with brilliant colors from the fresh fruits and veggies — apricots and cherries, oranges and tomatoes, , eggplant and peppers, bunches of greens and heads of garlic. 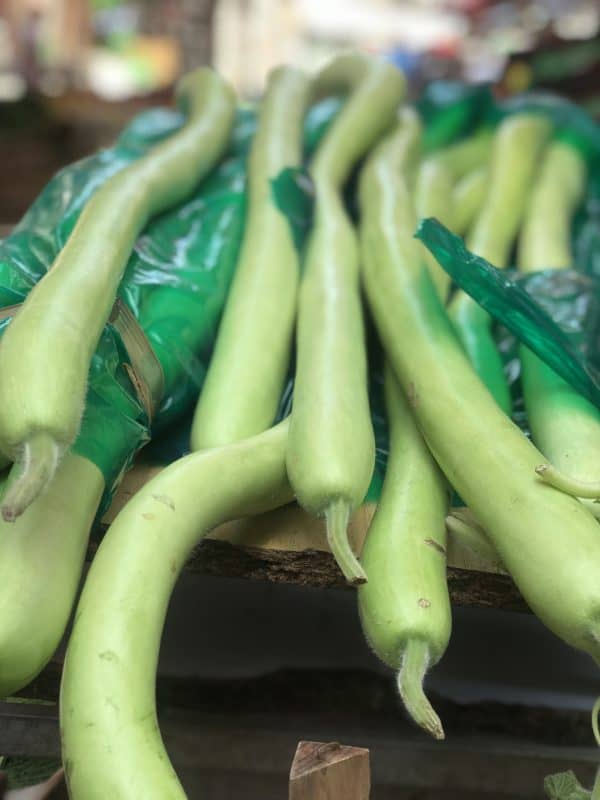 Cucuzza are a Sicilian squash

There is one veggie that stands out called cucuzza. Salvo explains that this long big pale green zucchini is a Sicilian specialty. “Cucuzza can be sliced, boiled, added to past sauce or even eaten as a snack,” he says. “And in Palermo men compare their anatomy to this type of squash!”

There are also butchers, fishermen, bakers and an odd assortment of housewares, clothing booths and souvenir stands aligning the market streets. 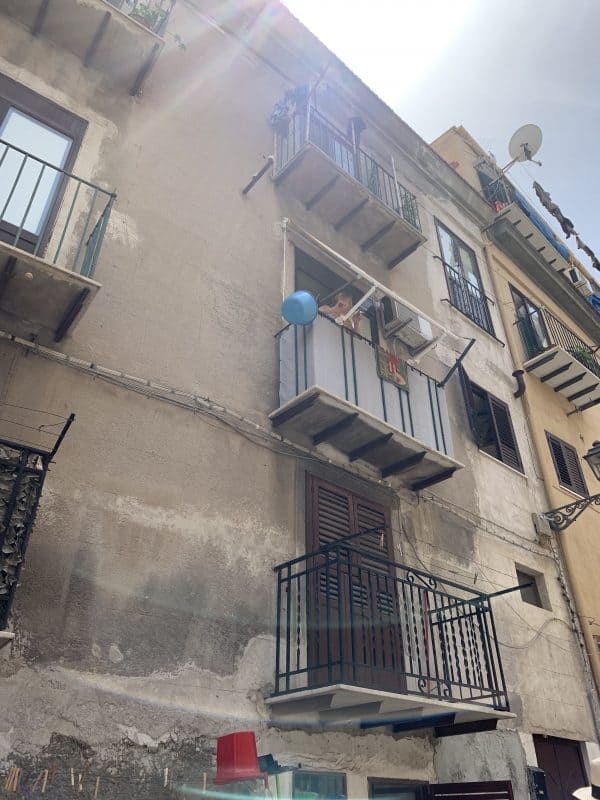 Getting our fill of carbs

It’s time to sample the local fare. We soon learn that Sicilians like their carbs. “We eat carbs and carbs in a sandwich. Three carbs,” says Salvo. “This is why we need to take a nap after we eat.”

Before we get our food, Salvo pours beer for a Sicilican toast. “Peroni beer is considered water here. It’s workers’ beer.” 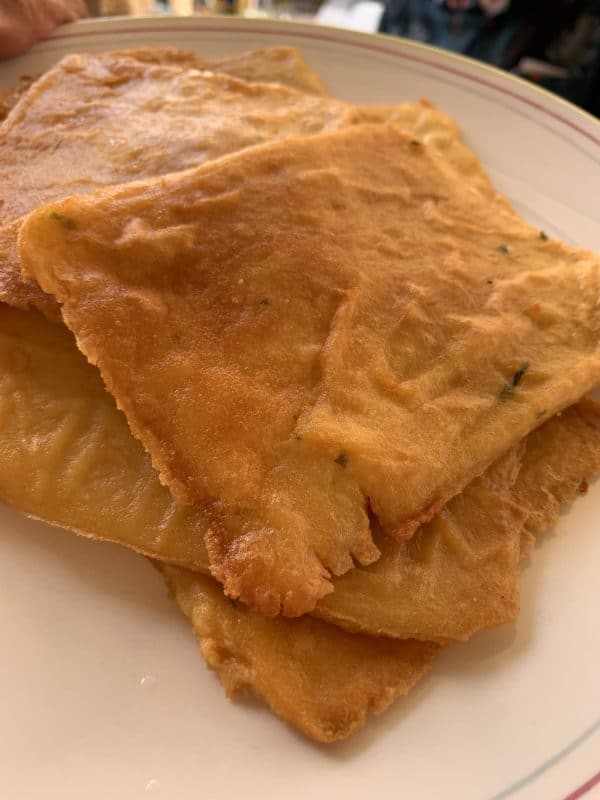 Cazzili is a fried potato snack

Then comes the food. Cazzilli, the fried mixture of potato with a touch of mint is greasy. Delicious carbs. Next comes panelle, a chickpea fritter. It’s a favorite snack with teens. More delicious carbs. Finally, comes the arancina, the biggest and best carb of all made with aborio rice. The Palermo version of this rice ball is round and looks like an orange. It’s flavored with saffron and gets its name from the orange tree. Such a delicious carb. 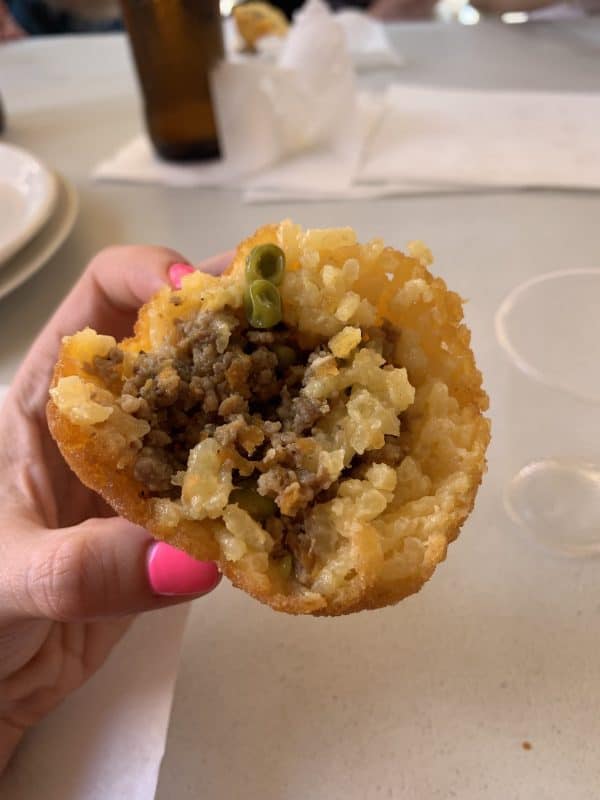 The arancina rice balls were our favorite snack

Salvo tells us a funny story about the arancina: “Arancina looks like a belly. In Sicily, an arancina belly is a big belly on men. Lots of New Jersey guys have one too,” he jokes. From that moment on we notice many arancina bellies, including our own after we’ve eaten all our carbs!

A little walk and more carbs

We walk past a church and the fabric district heading toward the La Vucciria market. We stop at a shrine in the fabric district across from the wedding dress workshops. Salvo tells us about another Sicilian tradition: “Saints solve problems. People carry pictures of saints in their pocket. The saint protects the dressmakers. She solves the marriage problems and fixes the husbands,” says Salvo. We’re advised to keep our handbags close by as pick-pocketers can be sneaky. 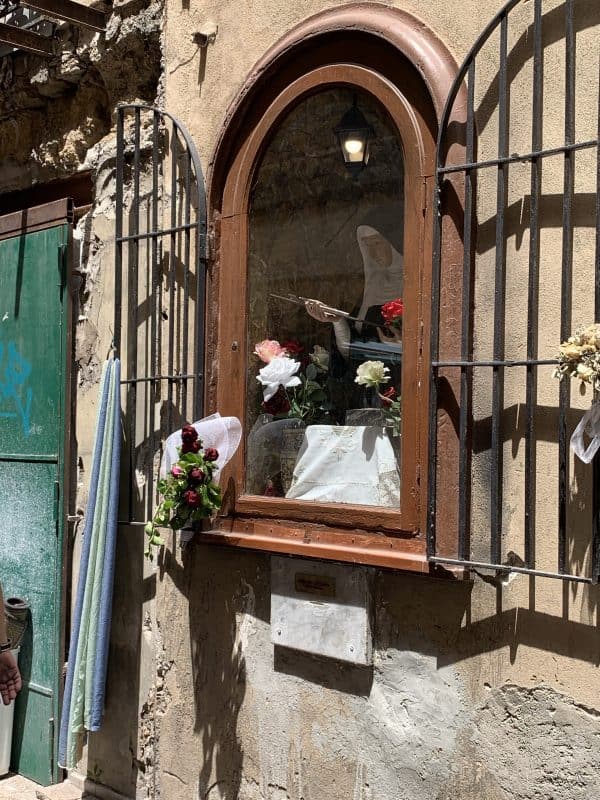 A Sicilian shrine for the saint

We walk a little further and meet the Palermo pizza peddler. Palermo pizza is called sfincioello, meaning sponge. The dough is exactly that, puffy like a sponge. It’s made the night before and then topped with a thin layer of tomato onion sauce. We agree that it reminds us of focaccia.  We sample sfincionello from the stand that Salvo says is the best bakery in Palermo. Yummy, delicious carb. 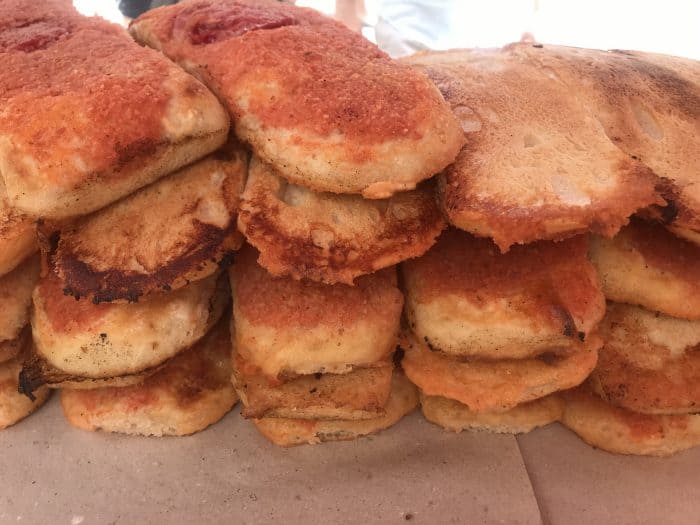 Toasting in the tavern

We arrive at Taverna Azzura, a tightly packed bar, for sweet wine and antipasto. The wine is from south Sicily, the bread from the north and the sun-dried tomatoes are local too. Our tummies are getting full and we must leave room for gelato. 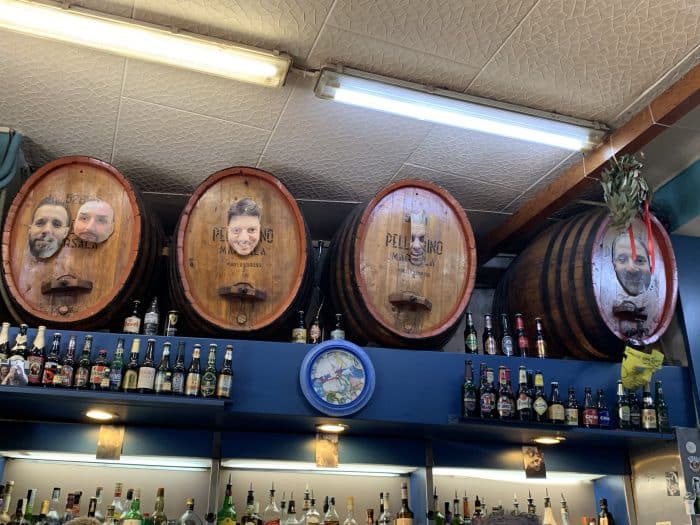 Beer is on tap at Taverna Azurra

Will you eat a spleen sandwich?

OMG, before we get to dessert do you want to try the ultimate Palermo specialty called pani ca’ meusa? It’s spleen of the veal and we’re going to sample the spleen sandwiches from the famous butcheria vendor where the late Anthony Bourdain came to eat his Sicilian spleen sandwich. Ooh, ooh, ooh, my daughter A is eating a spleen sandwich. So is M. I just can’t. I can’t. Can you? Give me more carbs. Show me the carbs. 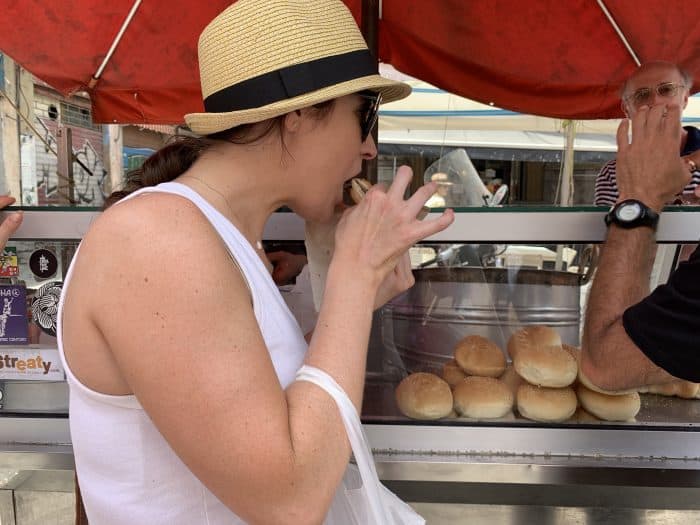 My brave daughter A indulged in a spleen sandwich

It’s always good to end on a sweet note. And that’s exactly what we’re going to do. “We claim gelato was created in Sicily,” says Salvo. “It was created during the Arabic period. During winter they would collect the snow and store it and go in spring and cut the ice and shave the ice with razors. They would fill the cups and add the flavorings on top. Sicilians added milk and formed gelato.” 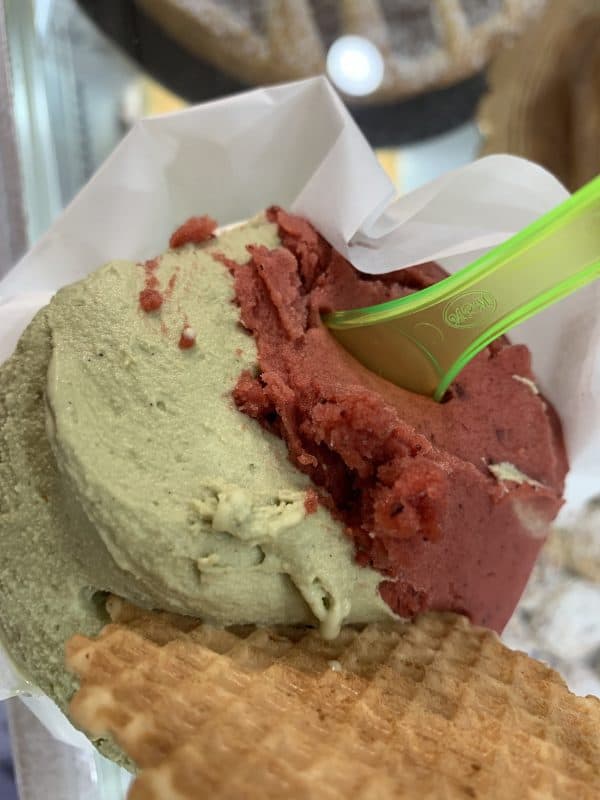 I opted for gelato

You can get your gelato at Bar Gelateria Lucchese with carbs in a brioche, like some Sicilians do, or do as I do and get a cup.

Is your tummy as full as mine? If not, I suggest you go book a trip to Palermo right now.

P.S. In case you missed my first posts about the London part of my trip and my initial Palermo post, links are below: