Are You Ready For An Adventurous Hike Up Sicily’s Mt. Etna? 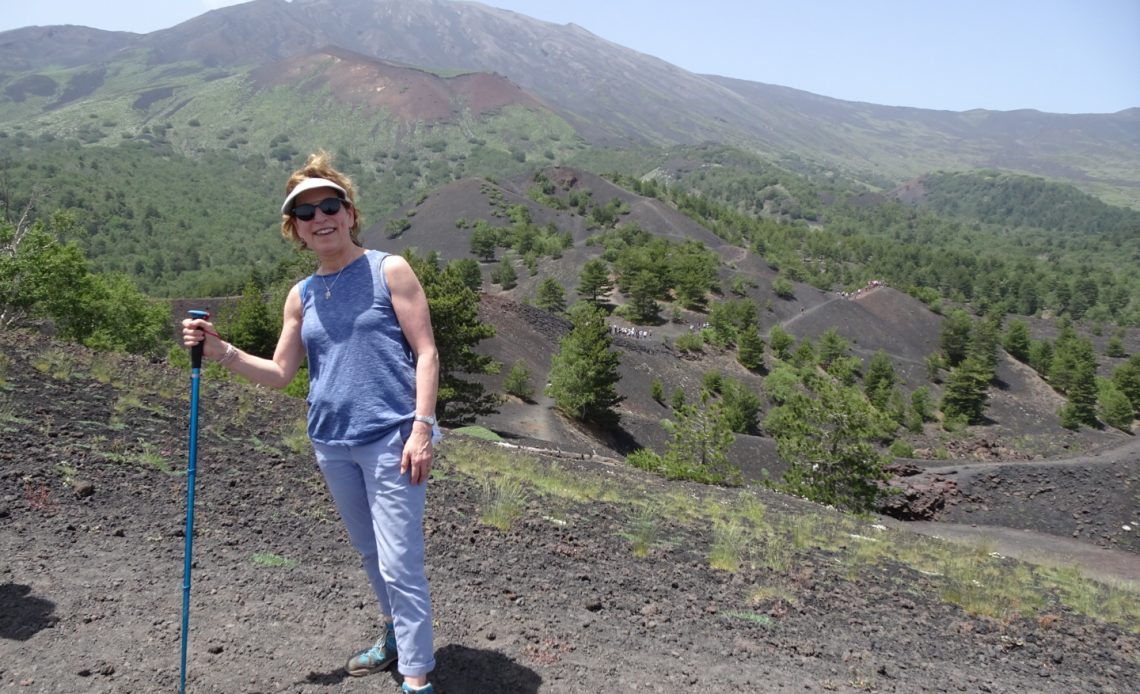 Now that I’m rested in the new year, I’m ready to tell you about my adventurous hike up Sicily’s Mt. Etna. Are you ready to join me on this climb? It’s been a while since I wrote about my girls’ trip to this beautiful Italian island with my sister N, my daughter A and her friend M. We visited last June and the memories are as vivid as ever.

Last time I wrote about Sicily we were in Taormina. I think we were eating pizza.  For now, let’s put culinary aside and prepare for a fun and fabulous hike up Sicily’s Mt. Etna. It’s going to be an amazing experience. 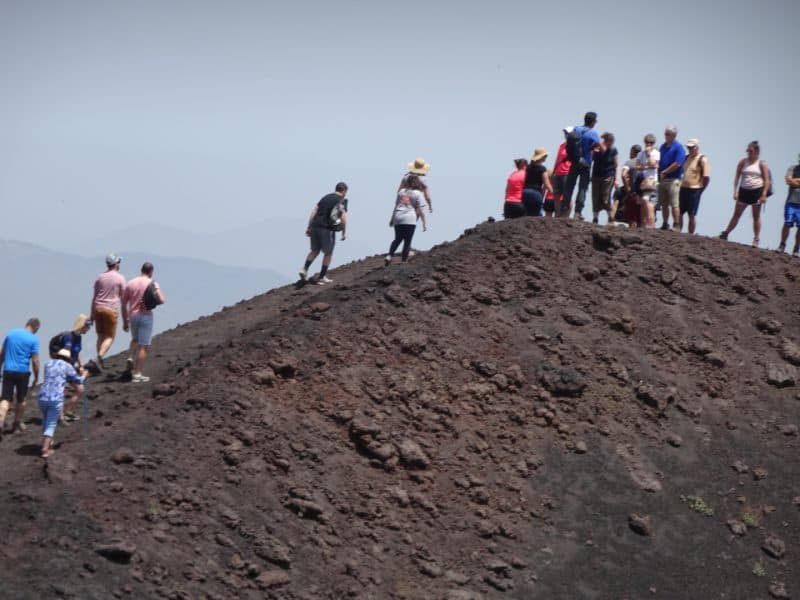 Are you ready to climb Mt. Etna?

We’re going on the GoodMorning Etna group tour with EtnaPeople. It’s a half day tour. The van is picking us up at 8:30 at the lovely Villa Le Terrazze, where we are lodging during our stay and will return around 16:30. It’s very warm out but we’re told to dress in layers as there may be a chill in the air when we get to the top of the volcano.

“Good morning,” says our guide Guiseppe, who is a local and passionate about his homeland.

“Were going to discover the north side of Etna and it’s stunning nature,” says Guiseppe.  “We’ll climb 6000 – 7000 feet up. We’ll also discover the underground and hike in the mountains. When we’re done, we’ll have time for lunch with Etna wine.” 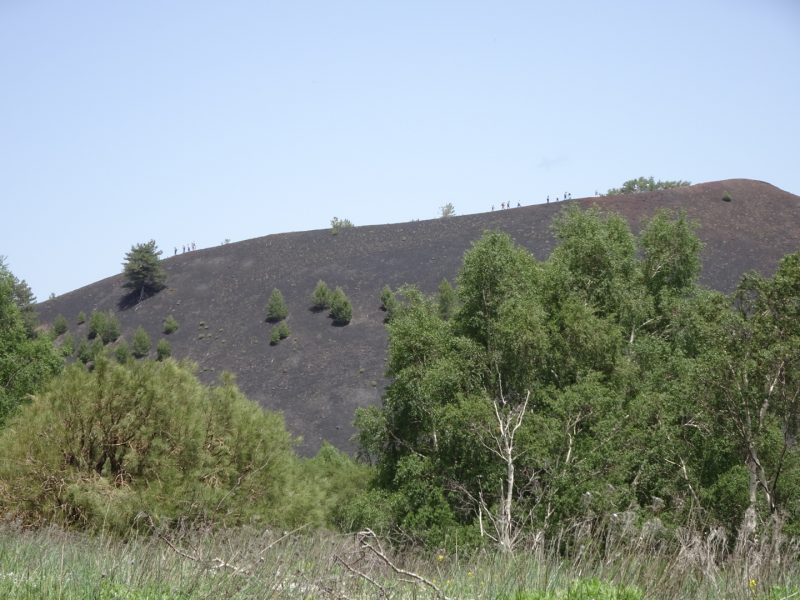 Do you see how high up those tiny people are?

Ooh, ooh, ooh, am I going to make it up the mountain? Let’s see how sixty-something N and I do compared to our millennial teammates.

Learning about the friendly volcano

During our 40 minute drive through the countryside, Guiseppe provides a brief history of Mt. Etna:”Etna is a young and complex volcano. It erupts once a year. Just last week it erupted,” says Guiseppe. “Etna is a friendly volcano, eruption is very slow so it’s not as dangerous. Lava flow is slow so people can escape. It’s not like Vesuvius, near Naples.”

We learn that the active volcano where Etna now stands evolved more than 2 million years ago. “Etna is considered a woman, from the Greek word that means ‘to burn,'” says Guiseppe. “Mama Etna is the third most active volcano in the world. It’s a mountain not just a volcano.” 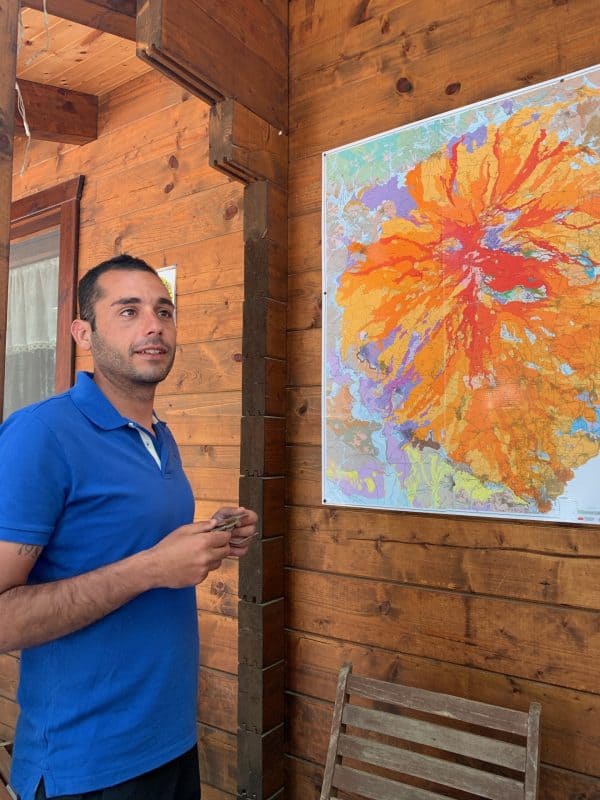 Our tour guide Guiseppe explains details about the volcano eruptions

Picturesque towns at the foot of the mountain

At the foot of the mountain is a small village of 3000 called Piedimonte Etna, where Guiseppe lives. Gates to the town are made of lava stone. Guiseppe shares more about the area’s offerings thanks to the fertile volcanic soil. There are vineyards for wine-making, hazelnuts to make hazelnut cream, and olives for delicious olive oils.

“Etna is a complex and explosive volcano,” says Guiseppe. “In 2013 and 2015 my town was covered with ash.” We notice that there is a haze over this side of Sicily, likely due to the recent eruption.

Next we pass through Linguaglossa, ‘lingua’ meaning ‘tongue in Latin and ‘glossa’ meaning ‘big.’ “People from this town spoke a lot,” says Guiseppe. “They had big tongues.” This town is known for its sausages. 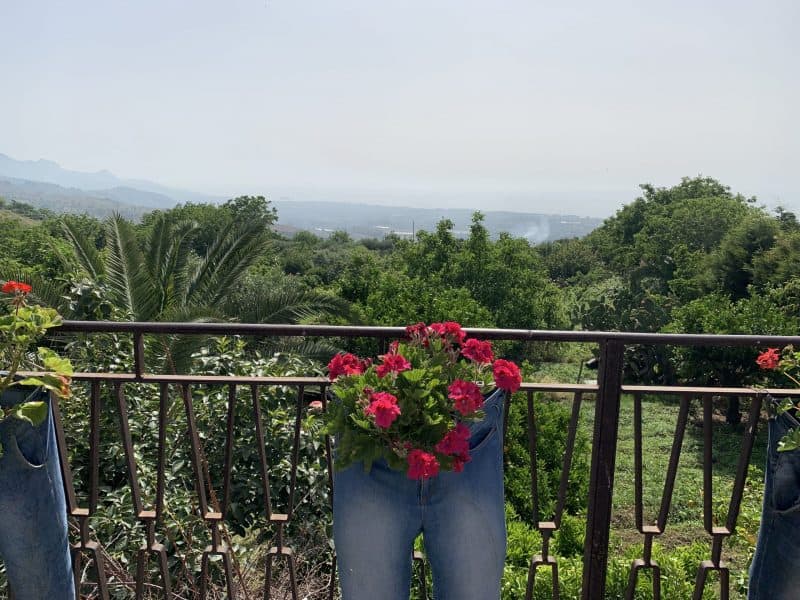 Picturesque views on our way to Mt. Etna

Getting ready for our climb

We enter the first regional park established in Etna where we see delicate white birch trees. We are 3000 feet high. Wow-o-wow, are you feeling the altitude?

Guiseppe tells us that there are birds, foxes, butterflies and other insects up here. Snakes too, in July and August. We pass the pine forest of Etna, the highest green of Sicily. 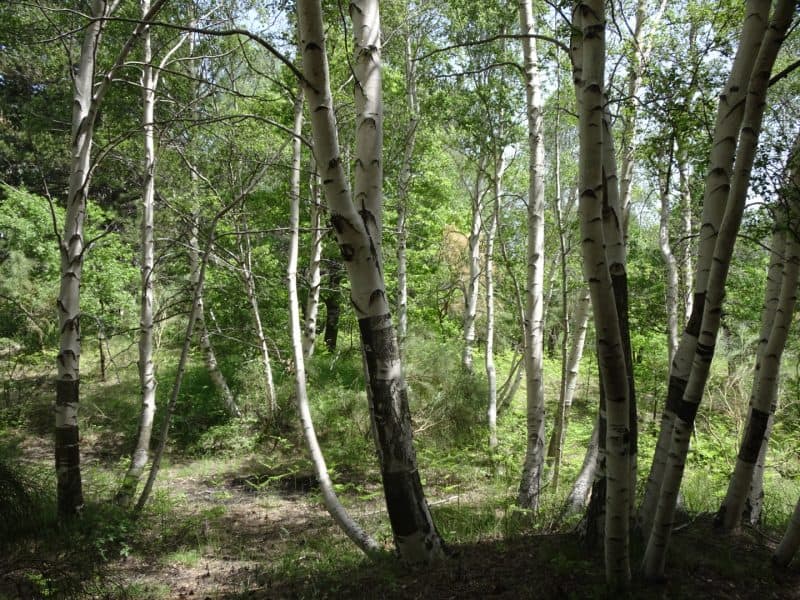 The beauty of the birch trees

Once inside the volcanic area, Giuseppe takes us into the lodge to get our necessary hiking gear, including hiking boots, hiking stick, and helmet.

OMG, don’t attempt to hike in your sneakers, it’s way too steep. And definitely take a hiking stick – you’ll need one! However, remember when I said it was supposed to be cold atop the mountain. Not today, it is so hot — feels like 90ºF. N and I are glad we brought lighter tees and quickly make a wardrobe change. Poor A and M, they are wearing leggings. At least they have sleeveless tops. Giuseppe says the heat this summer is very rare — could it be global warming? 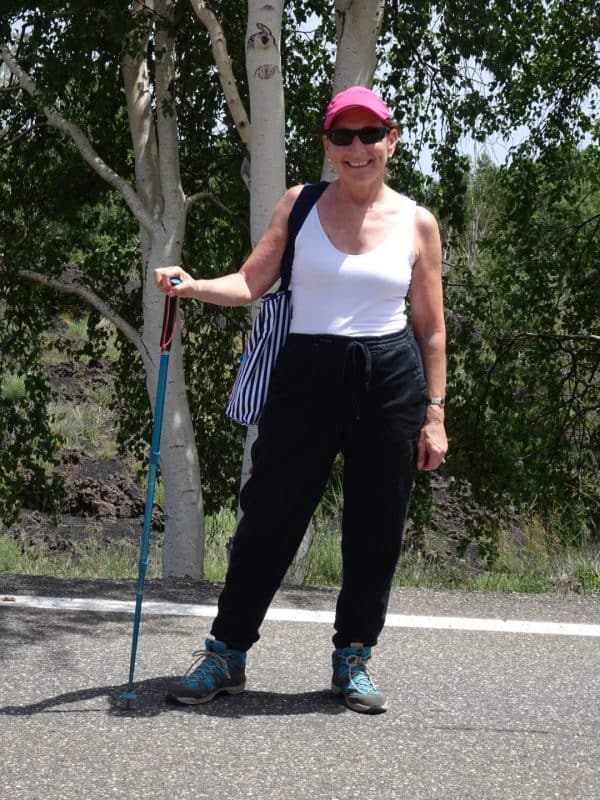 A history of lava flow

As we begin our hike, Guiseppe explains the history of lava flow and the 300 small craters that surround us. “Every level of Etna lava is like the layers of lasagna,” says Guiseppe.  “With a high volcanic tremor the experts can predict an eruption. Sometimes they have to close the Catania airport due to smoke.”

According to Geology.com, Etna’s eruptions have been documented since 1500 BC. Guiseppe provides some of the highlights. “The worst eruption was in 1669 when lava arrived in Catania. In 1928 the lava flow made a creek and destroyed the sea. In 1981 another lava flow went to the river. In 2002, an eruption destroyed the north and south side of the area,” he says. 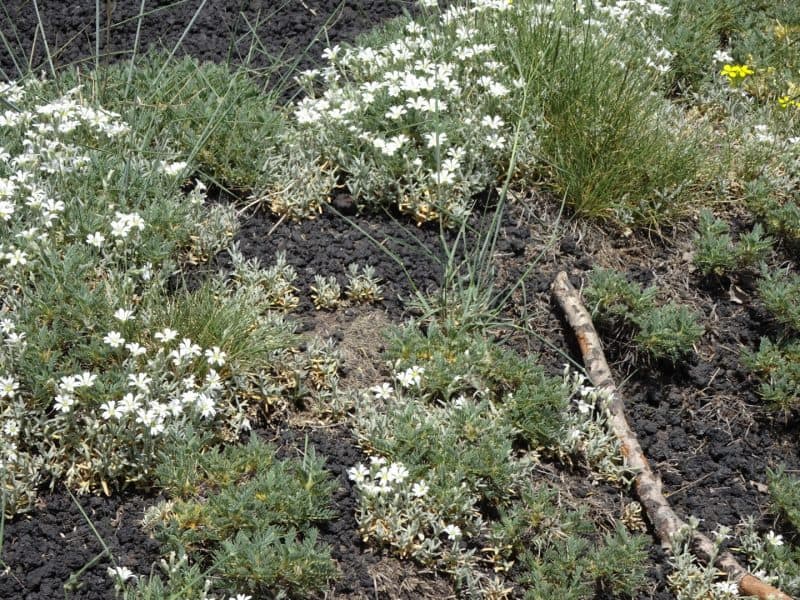 It’s amazing to see flowers growing among the lava rocks

Using our hiking sticks strategically, we step carefully over the black lava rocks from the 2002 eruption. Trees are growing among the rocks. 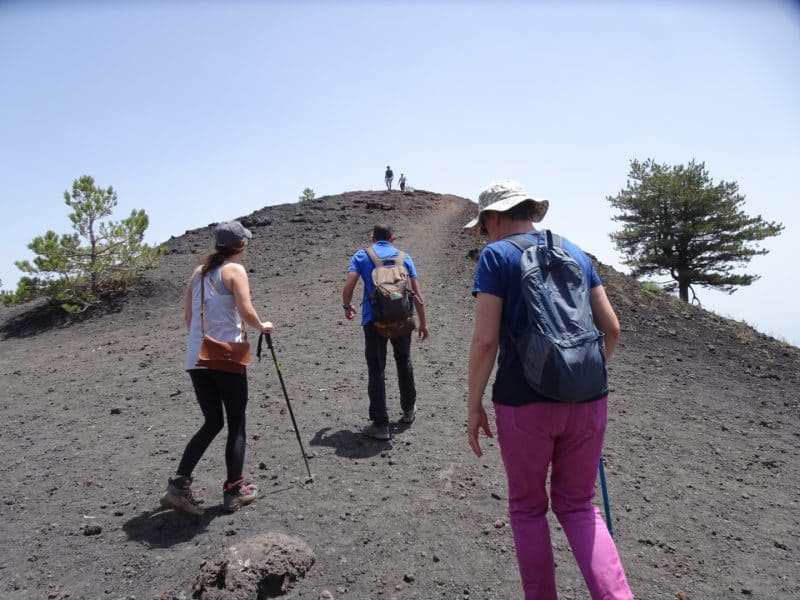 Wow, those hills are steep

Going inside the caves and climbing craters

“We’re going into the caves now,” says Guiseppe, instructing us to put on our helmets. It’s a tricky set of steps and we bow our heads. It’s cool and wet from the wells. “They stored ice in the winter here which was used in the summer to keep food cold,” he says. 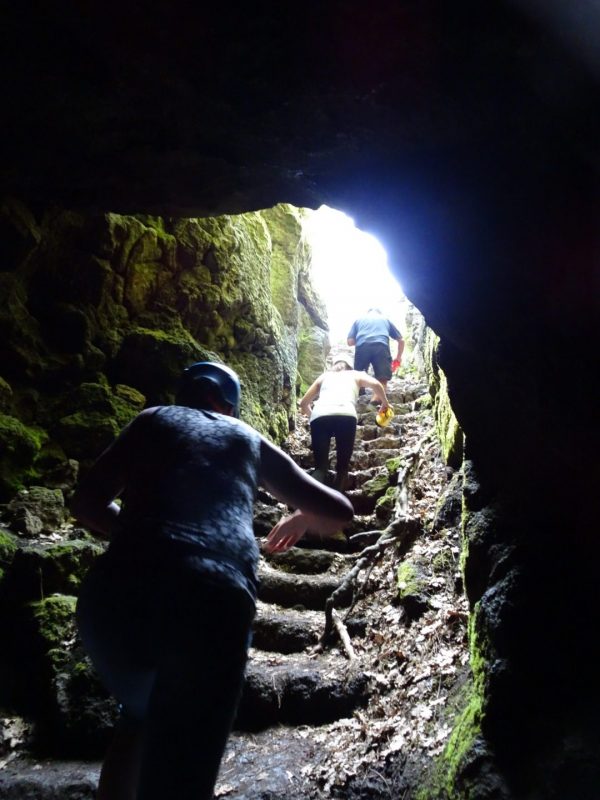 Into the caves and out the other end

Once outside, we begin our ascent up the canyon and craters. Up, up, up, we go. We reach 6000 feet to the top of one of the mountains. The view is awesome and I feel empowered upon reaching this peak.

“We’re going to climb the next crater,” chimes Guiseppe. N and I look at each other and let out a big sigh. Going higher in this heat is not an option. “You go,” we alert A and M. “We’re staying behind and will meet you on the way down.” N and I hunt for shade which is non-existent. Can you feel the sweat dripping off our foreheads? How hot is it? It’s so hot! So hot!

Yay, here comes the rest of the group. It’s time to hike back down the canyon. Whew, glad to make it back to the lodge in one piece. 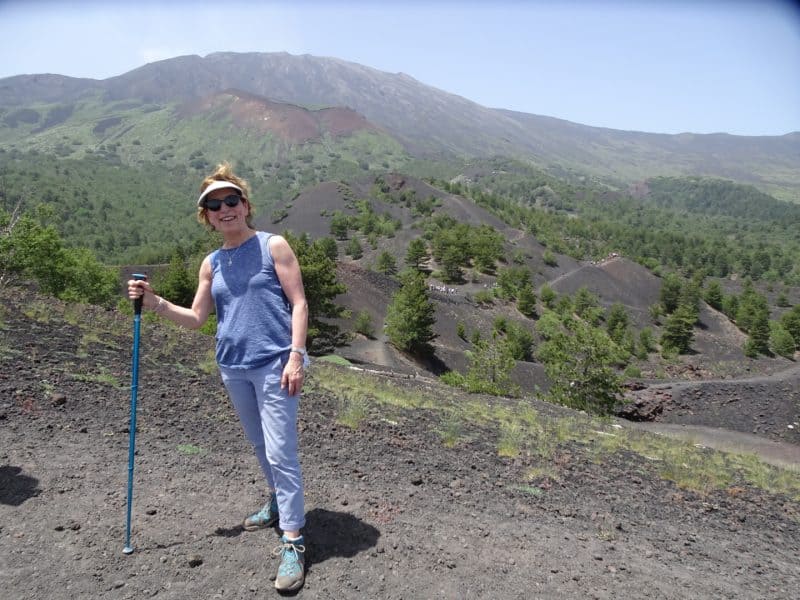 Feeling empowered at the top

A pat on the back

Feeling proud of my accomplishments, I give myself a pat on the back and tap my sister N too. At sixty-something we still got it! Yep, we did it! We climbed Mt. Etna. Now you did too. Pat, pat, pat.

I wonder as I face some health challenges these days if I will climb a mountain again. Then I remember that quote that I just read. It says:

just think of the view from the top.”

Yes, yes, yes, when I’m  feeling vulnerable, I’m going to think of that view from the top of Mt. Etna. And maybe someday I’ll go back and go to its peak. If I can’t climb I can always take the funicular — the cable car takes you up to 8500 feet in about 10 minutes!

P.S. There’s one more story to share about our last day at the beach and farewell dinner in Taormina. I’ll be back soon with all the details. For now, in case you missed my previous posts about the London part of my trip and my Sicily posts from Palermo and Cefalù, links are below:

♥ Ciao! Join Me For A Fabulous Street Food Tour of Palermo

♥ A Stopover in the Charming Sicilian Village of Cefalù

♥ My Travels to the Charming Resort Town of Taormina