An Engaging Tour Of The Old and The New In Helsinki 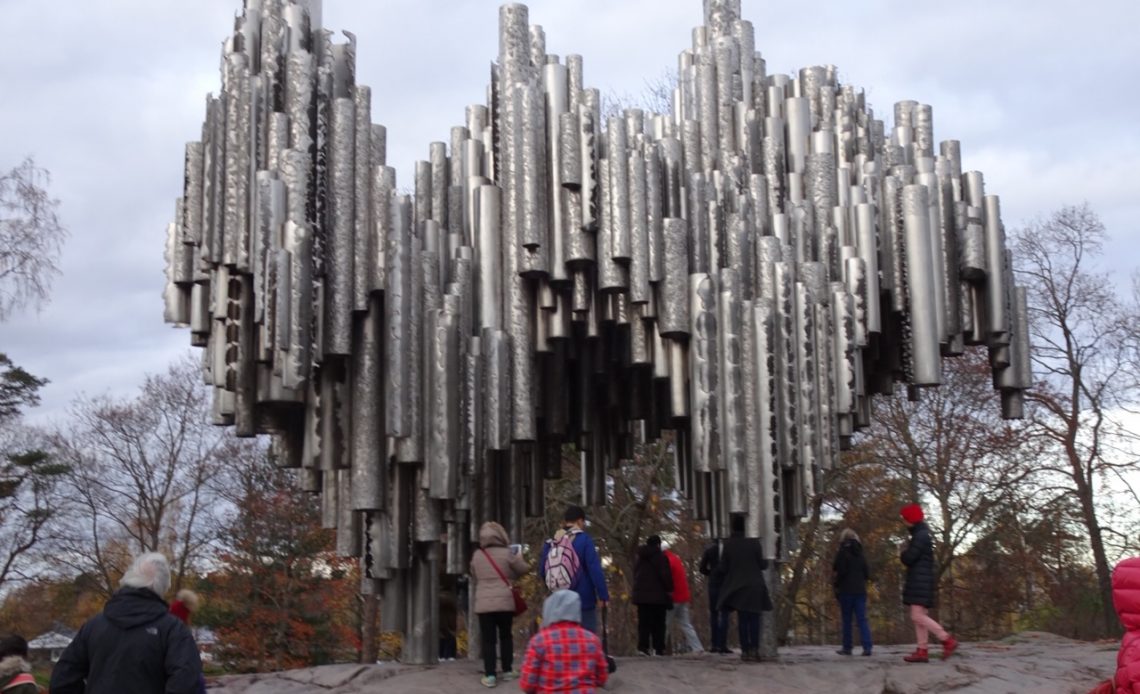 There was a big chill in the air, even in October, as I boarded our coach for what would be an engaging tour of the old and the new in Helsinki. It was my first full day on the Northern Lights of Finland Tour courtesy of Collette Travel.*

Learning about the capital of Finland

“Welcome to Helsinki, the capital of Finland,” said our guide Maria.  “Finland is about as big as Germany and California but with less inhabitants. They have Russia on one side of the border. It’s a peaceful border. Mr. Putin and Mr. Trump met in Helsinki this year. It is a republic and a member of the European Union.”

As we drove around the harbor, Maria shared more about Finland’s backstory. “Finland became independent in 1917. Throughout the 18th century Finland was a member of the Russian territory. Before that it was part of Sweden,” she said. “The Finns owe their independence to the Bolshevik Revolution. People who have lived here have their own country language. However, the legacy is Swedish, so everything is in Finnish and Swedish.”

Maria told us that the Baltic sea freezes over in the winter. “The Baltic freezes over because it has a very low salt content. It’s the same latitude as Alaska and is connected to the Atlantic by a very narrow opening. We have long, cold and dark winters and short summers.” June and July are the summer months with long light days. (Can you imagine a day  with 19 hours of darkness in the winter! And the Finns are still happy people. That salty licorice candy must work wonders on the psyche.) 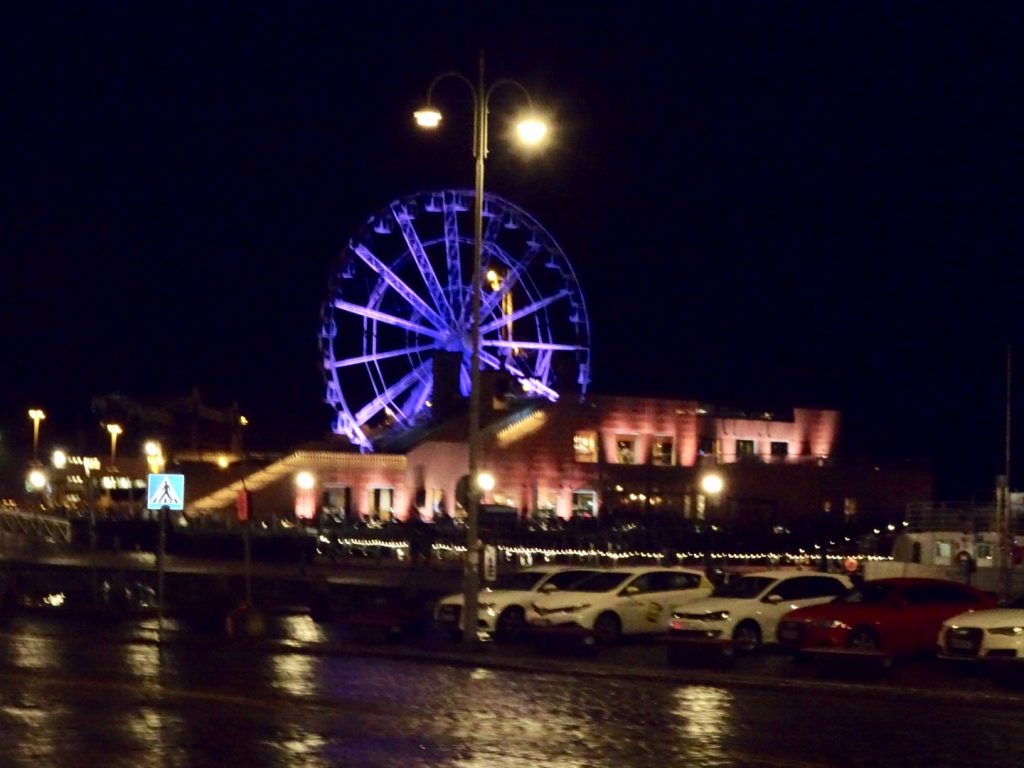 From the marina, we drove past the Art Nouveau section of town. This area was built up during the end of the 1800s to early 1900s. The buildings are colorful and the architecture is romantic. 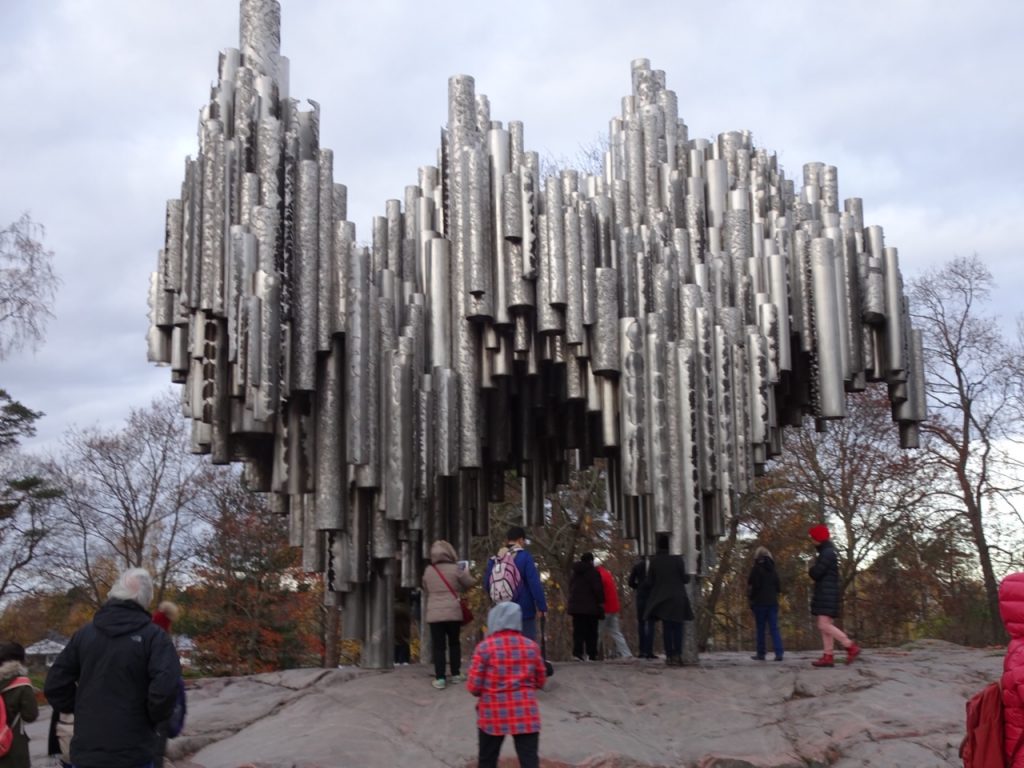 Sibelius Monument is a tribute to a famous Finnish composer

Next we visited two more modern Helsinki showpieces — the Sibelius Monument and the Rock Church.

The Sibelius was created by a female designer in the late 1960s and honors the famous Finnish composer of the same name. It sits in a small park close to the water (it was so cold walking around the Sibelius) and is mammoth in size. “It’s an interactive abstract monument,” said Maria. “Look closely and you will see music, nature, ice, water, forests and more.” 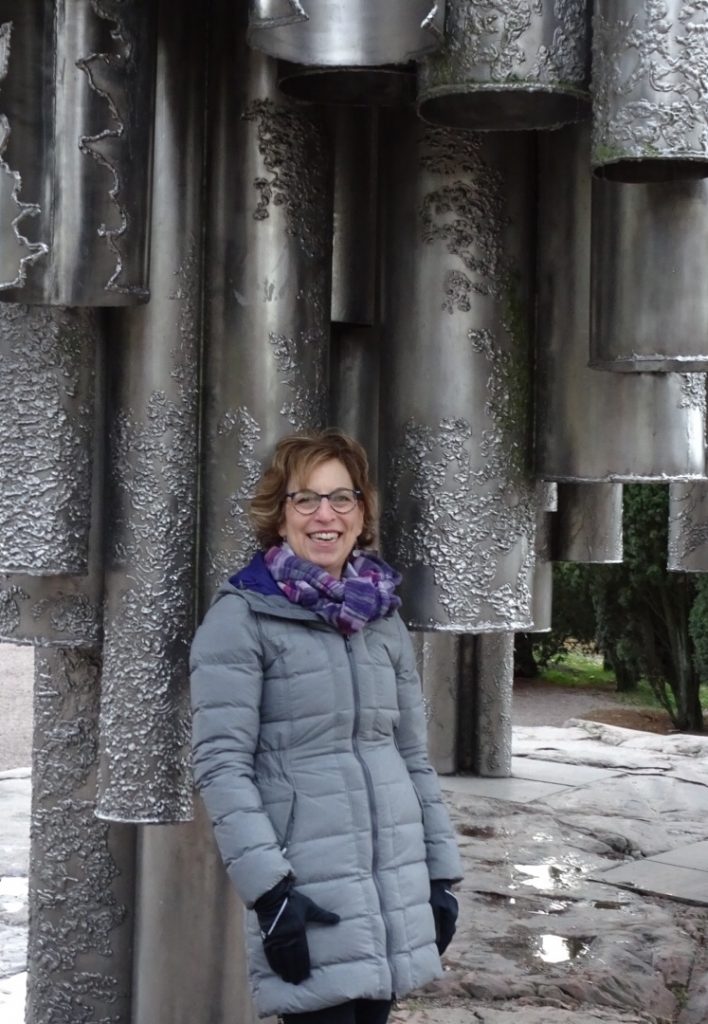 Rock Church, is literally built into a rock. It’s an amazing structure with a copper dome. Constructed in the 1960s, the church continues as an active house of worship today. 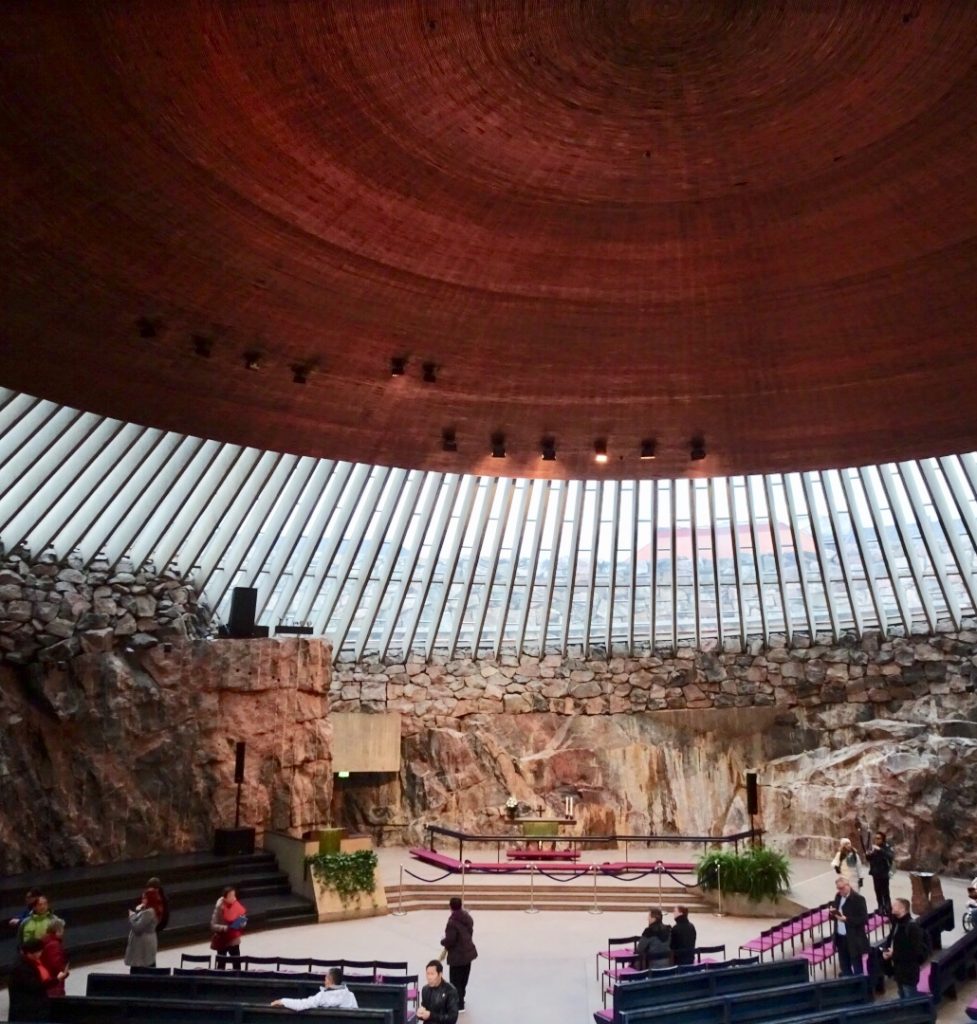 I can see why Helsinki is known in the design world. Our visit to the Helsinki University Main Library impressed us all with its contemporary layout and openness. (If I were a student I wouldn’t mind studying in an environment like this one.)

Maria mentioned that there are no private universities or schools in Finland. All are funded under the government and paid for out of taxpayers’ money. It’s one of the reasons why the country has high taxes. She also said that the Finns pay for the church in their taxes. We did see the Lutheran Cathedral nearby, which is another authentic symbol of Helsinki. 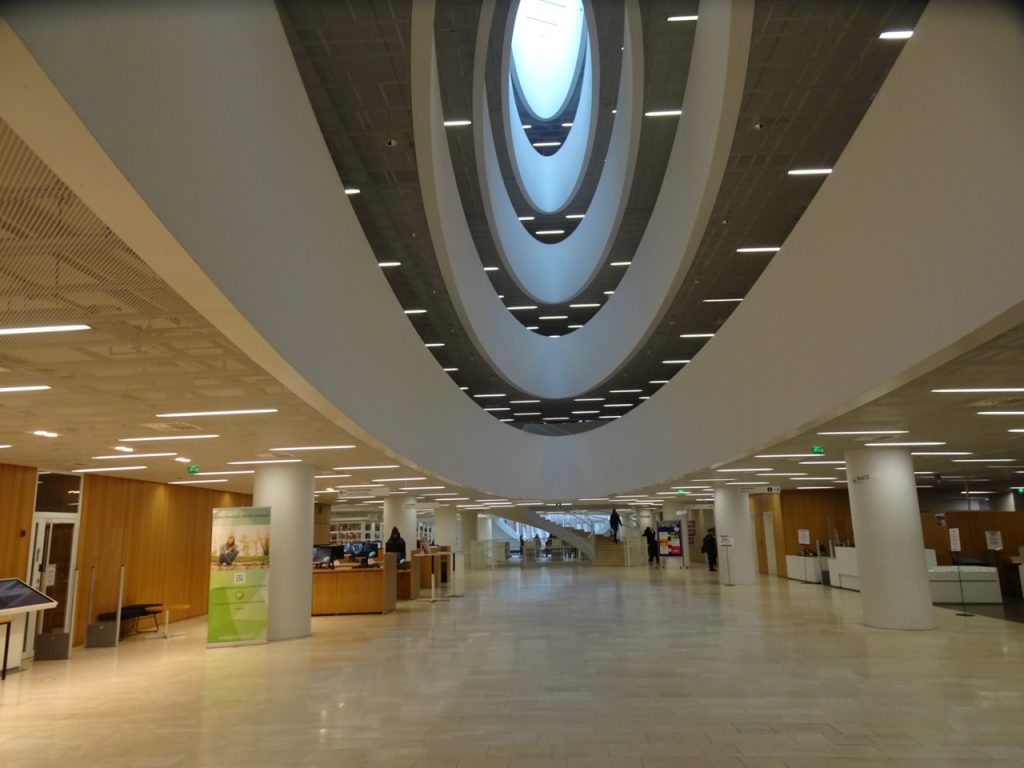 The University Library reminds me of Guggenheim Museum in NYC

There was so much more design to explore in the city but not enough time during this trip. Maria mentioned four museums to check out including: the Ateneum Art Museum (also known as the Finnish National Gallery), the Museum of Natural History, the new Underground Art Museum and the Design Museum. There’s always a next time I told myself. 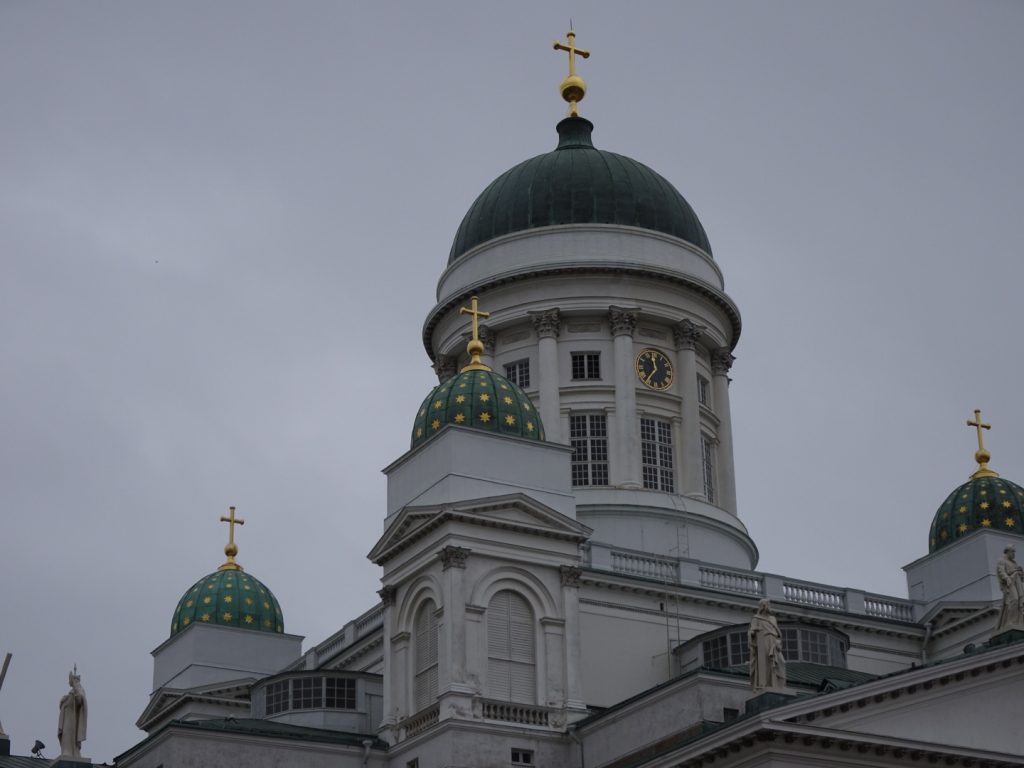 An afternoon of shopping

After touring by coach in the morning, my new travel friend Pat and I spent the afternoon shopping and consuming some of Helsinki’s culinary fare. 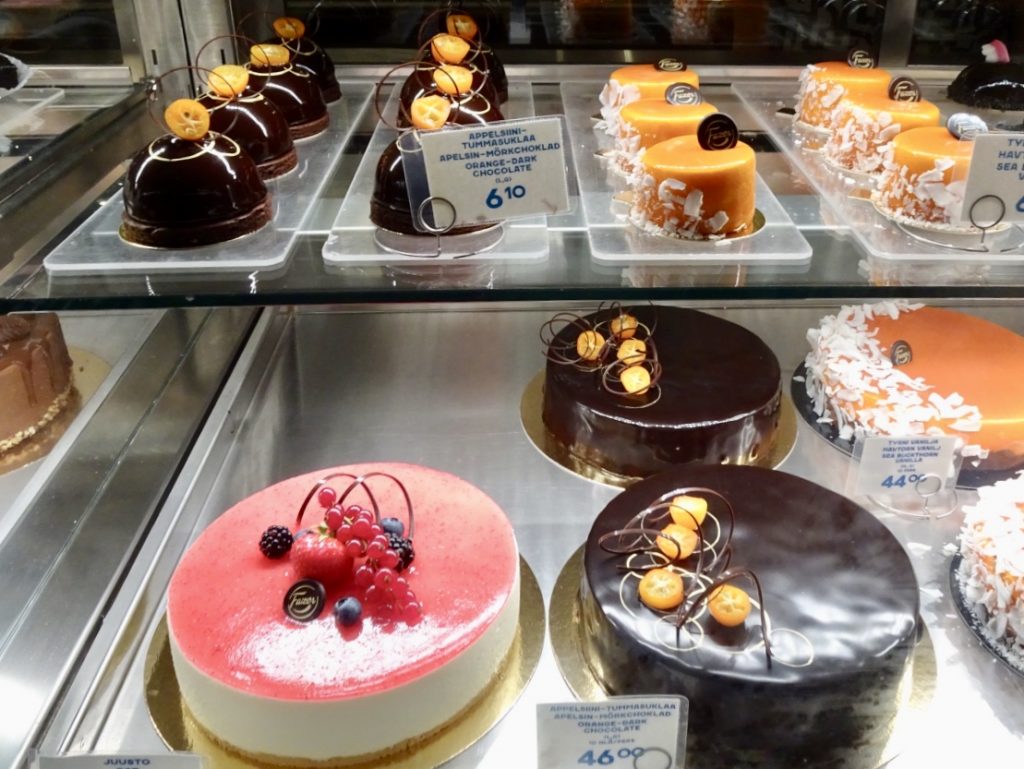 Decadent desserts were served at the Karl Fazer Cafe

Esplanade Avenue, which was a few blocks from Lilla Roberts Hotel where we were staying, culminates in the shopping area. To the north end is Helsinki’s high-end department store Stockmann. We walked around its many floors and exchanged dollars for euros on the top floor. It offers a lovely selection of clothing and other merchandise.

If you like sweets then you’ll want to stop at the Karl Fazer Cafe, where you can purchase bars of Finns’ favorite Fazer chocolates or buy handcrafted pieces by the pound. It’s a busy cafe but if you can find a quiet time I suggest taking a lunch break here and ordering a sweet pastry for dessert. 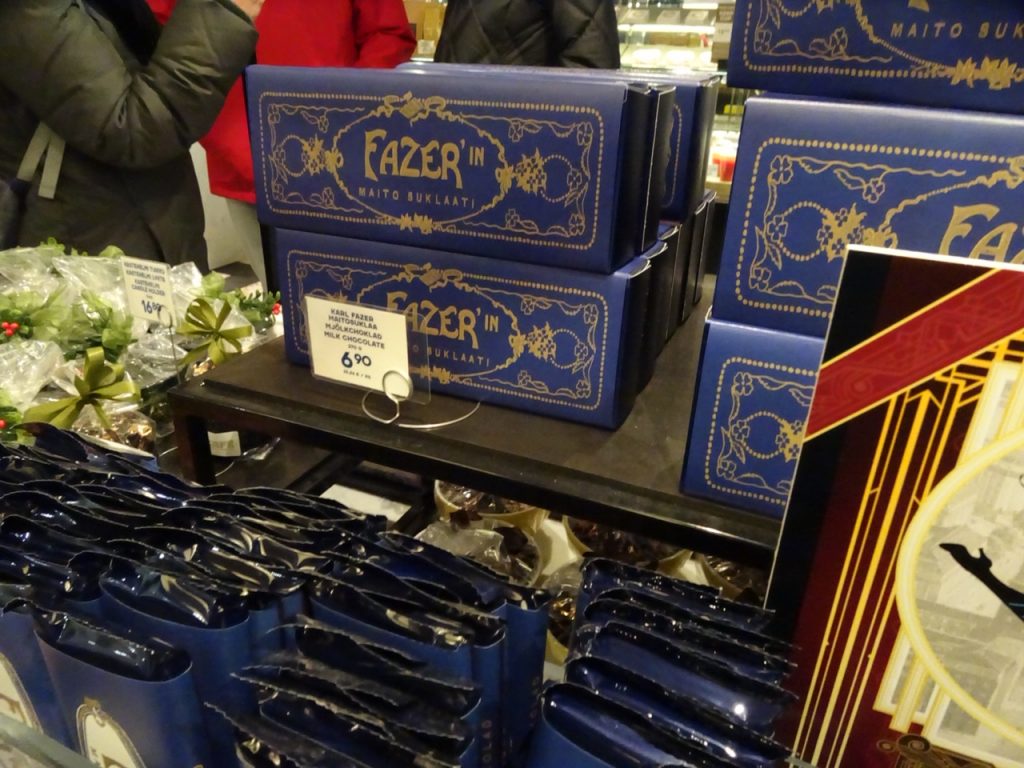 There are other fun shops and restaurants along Esplanade and its side streets. Be sure to stop in the Marimekko outlet if you like bold designs or further down the boulevard at the Taito knitting and fabric shop. 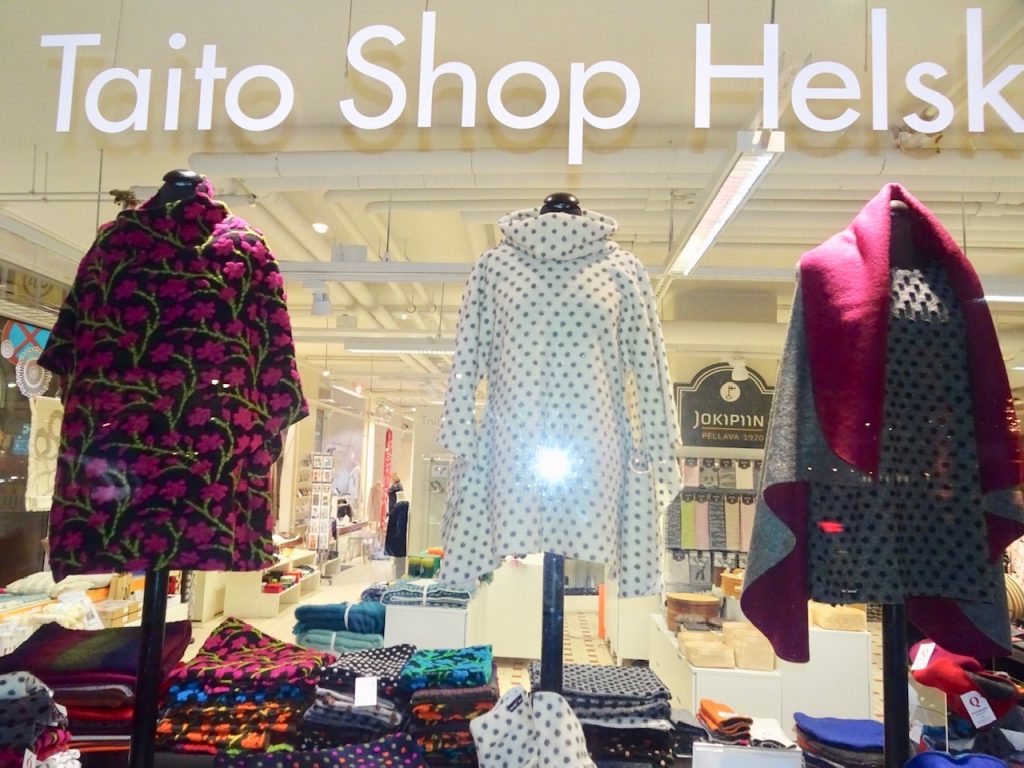 Displays in the Taito Shop window were eye-catching

Close to the harbor is the Market Square and Old Market Hall that are definitely worth a visit. Since it was quite chilly, we explored the outdoor tents in the Square for souvenirs and then went inside the Hall for lunch. Story cafe seemed to be one of the busiest cafes. Had I not eaten fish soup the evening before, I would have ordered it here. The soup looked amazing. Instead we dined on a slice of quiche with salad, which was very good. There’s a great assortment of bistros and food shops in the indoor space. It’s worth meandering through if you want to sample or bring back some Scandinavian delicacies. 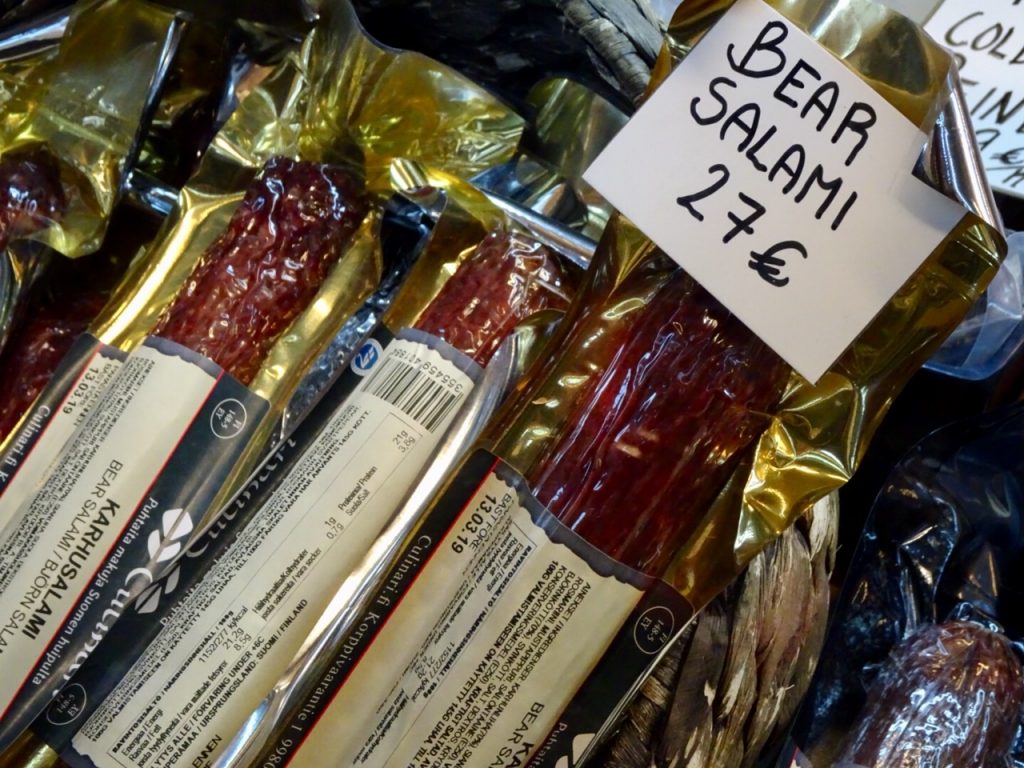 The sun goes down early in Helsinki, between 3:30 and 4:30 p.m. Tomorrow our group would be heading further north in search of the Aurora Borealis. My suitcase was packed and I nestled into slumber. Next stop Lapland. Will I see the Aurora? Stay tuned.

P.S. In case you missed my earlier posts about my Explorations by Collette Travel trip you can find them here:

♥ Preparing for an Adventure in Search of the Aurora Borealis
♥ It’s Time to Be Merry: Visiting Santa & His Reindeers In Lapland
♥ Finding Happiness On My First-Ever Visit To Helsinki

*Disclosure of Material Connection: This is a “sponsored post.” Collette Travel provided me with a complimentary press trip on their Northern Lights of Finland Tour. Regardless, I only recommend products or services I use personally and believe will be good for my readers.