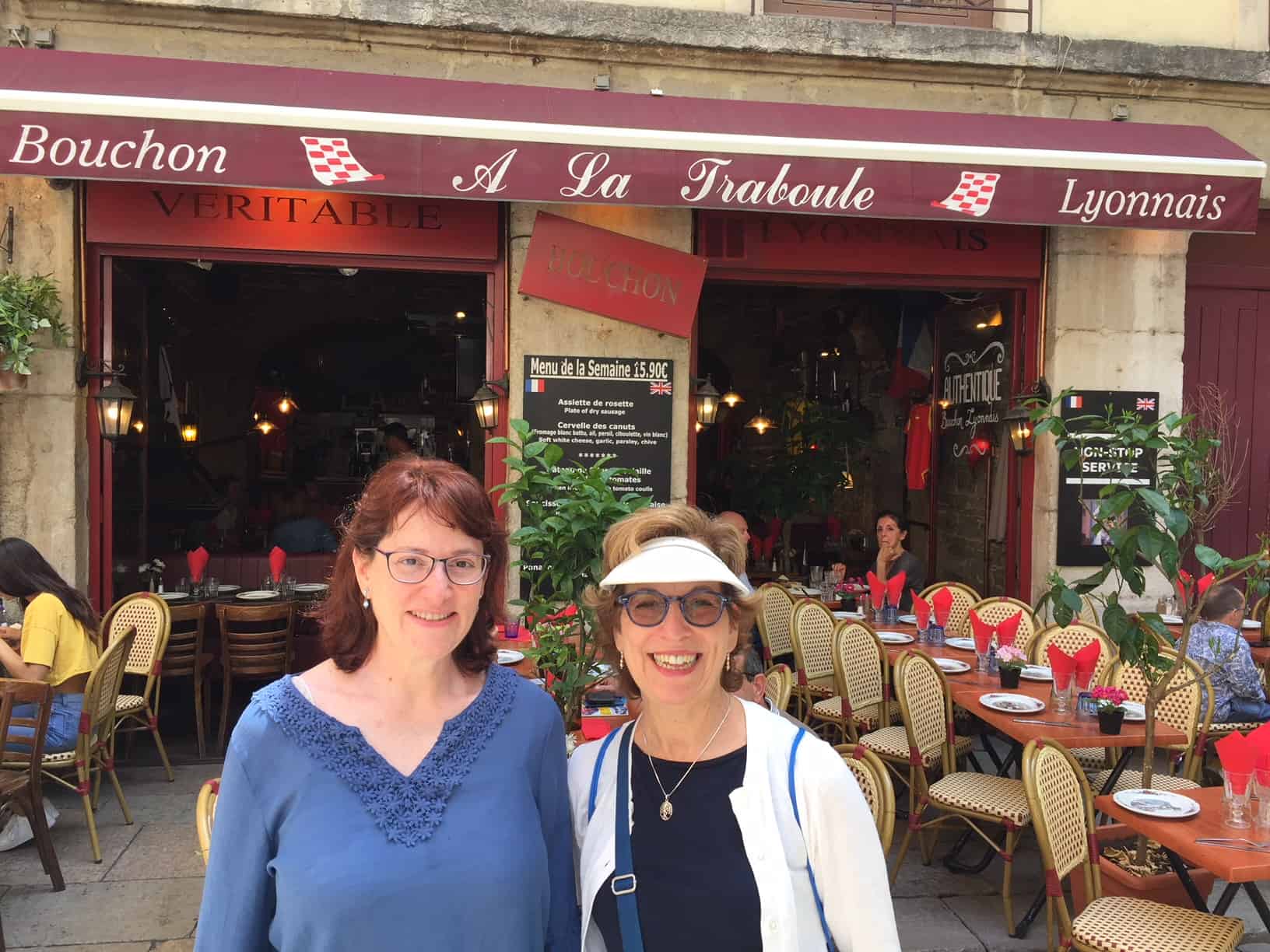 I’m back with highlights from my summer trip to lovely Lyon, France.  This time I’m going to take you on a wonderful walking tour of Vieux Lyon, also known as Old Lyon.

I was visiting the city with my BFF L for our mutual 60th birthdays. We had booked a Free City Tour online in advance of our arrival. (Note: The tour was in English.) 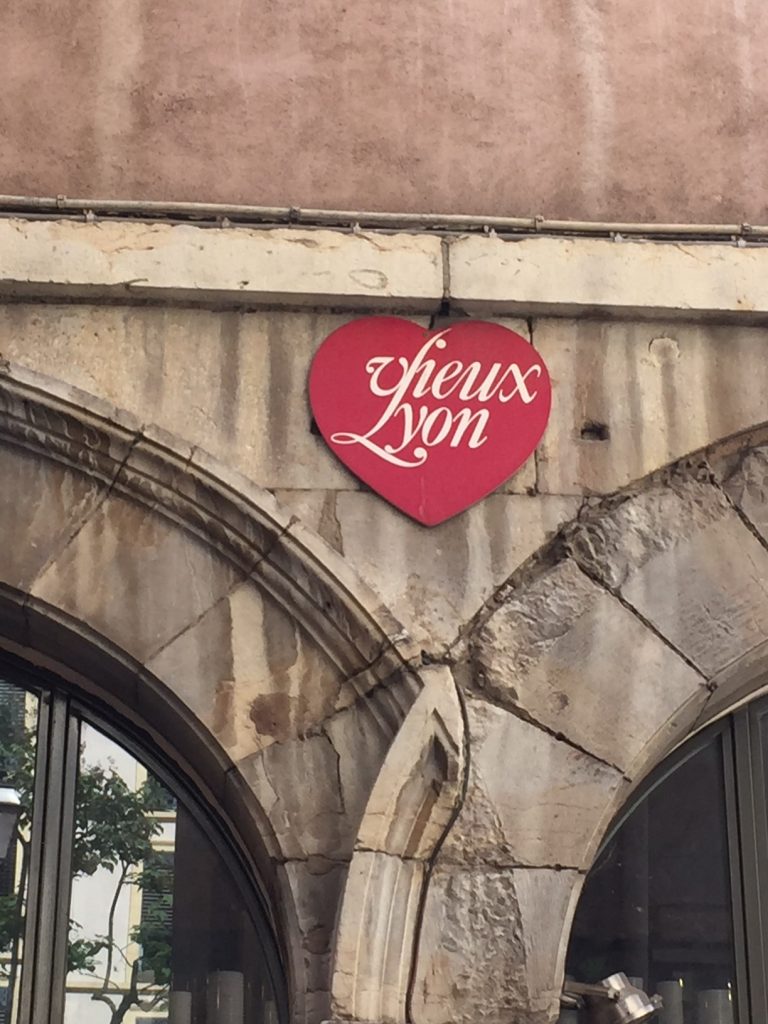 Vieux Lyon is known as the Old City

Learning about the Old Lyon

Our two hour group tour began in Place Saint-Jean, the square in front of the Gothic St. Jean Cathedral. Before going inside the Cathedral, our guide Paul pointed out Notre-Dame Basilica, atop Fourvière Hill, which was in perfect view from the square.

“This is where the city was founded by Romans in 43BC,” said Paul. He suggested we take the funicular up the hill where you can see the church and the old Roman theaters. Unfortunately, we didn’t have a chance to experience the ride. It sounds amazing, especially at night with the lights. More reason for a return visit. 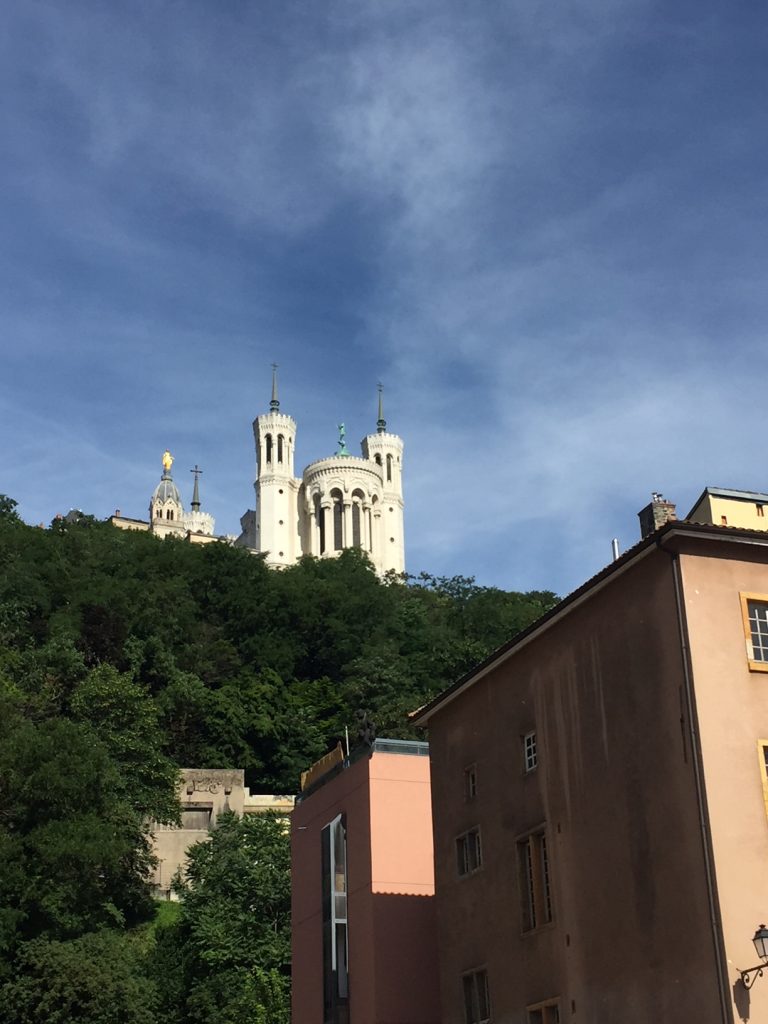 A tour of St. Jean Cathedral

Paul provided a history of  St. Jean Cathedral. “It took 300 years to build this church,” he said while explaining details about the panels along the facade. Each panel  tells a biblical story including the tale of Adam and Eve and the tree of wisdom. 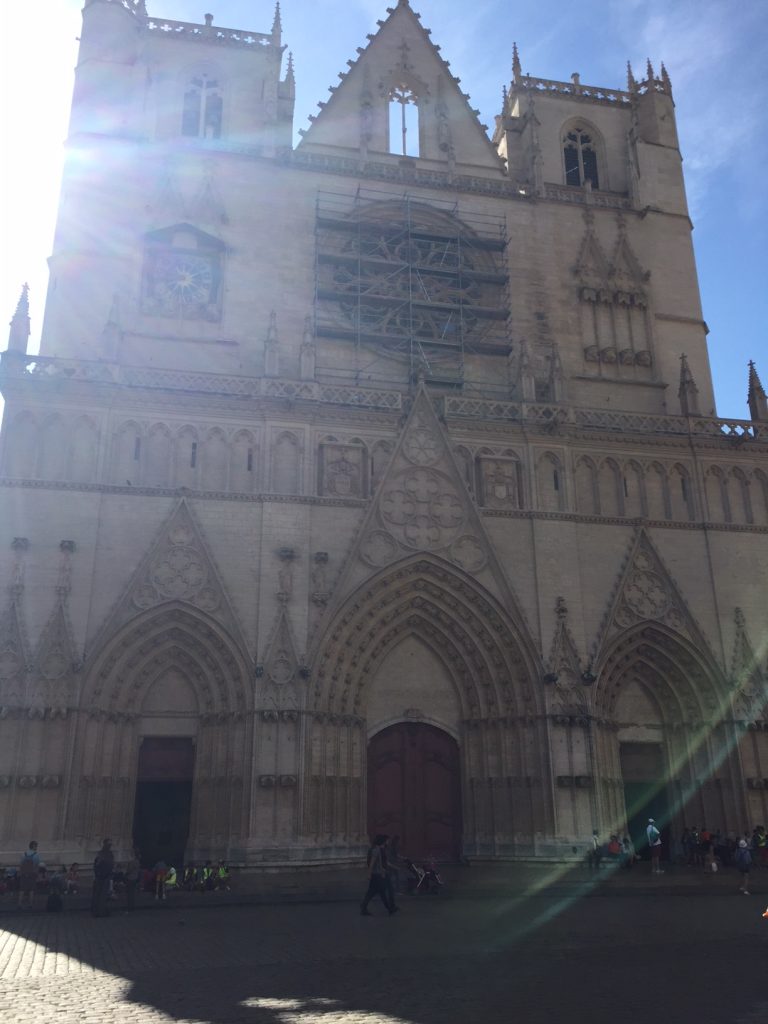 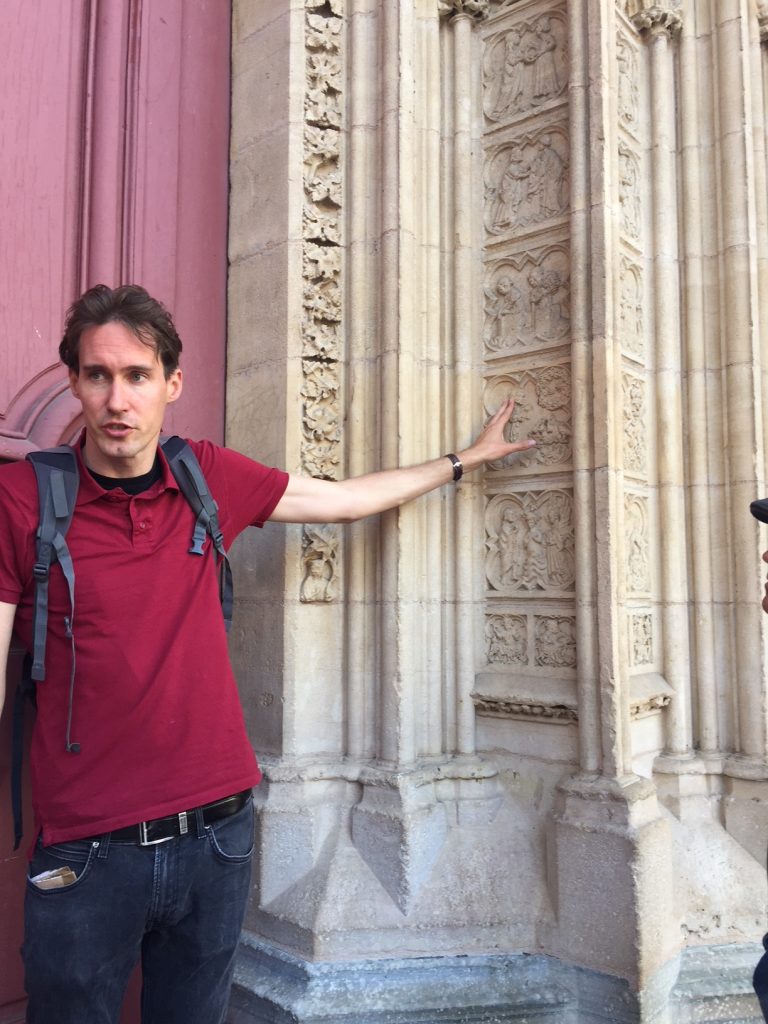 Even though it was in the middle of being cleaned, the interior of the Cathedral was quite magnificent with baroque-style paintings on the walls, 13th and 14th century stained glass above the altar and halls, and a medieval astronomical clock dating back to 1383. Sadly, Paul said the clock was currently broken. 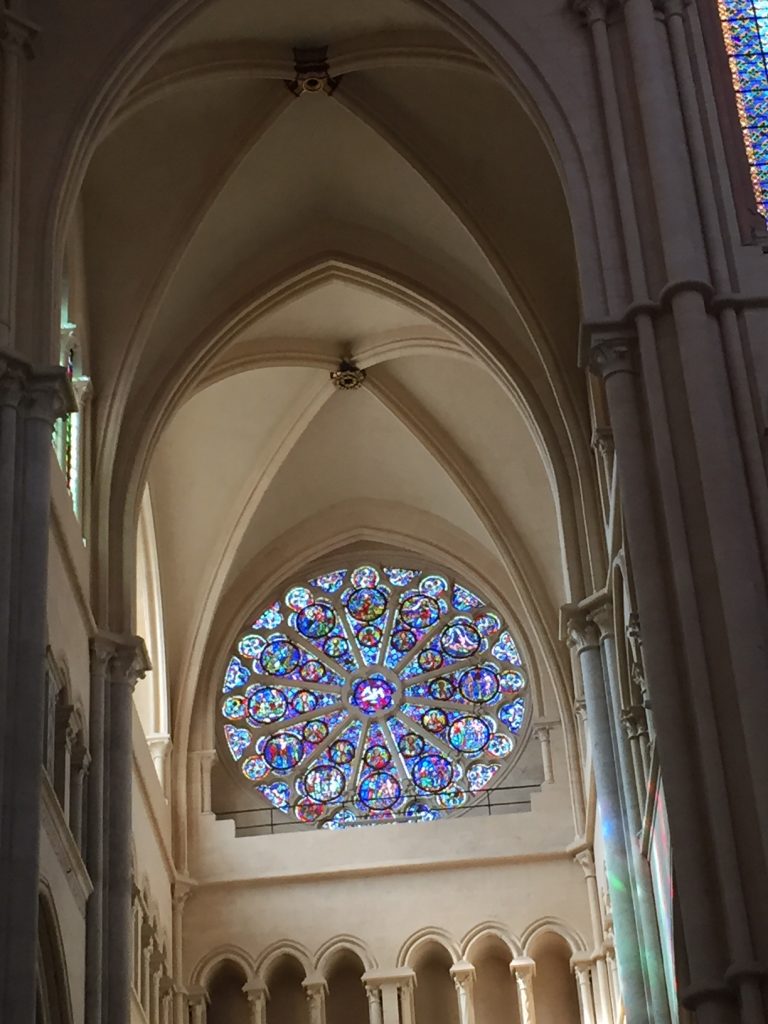 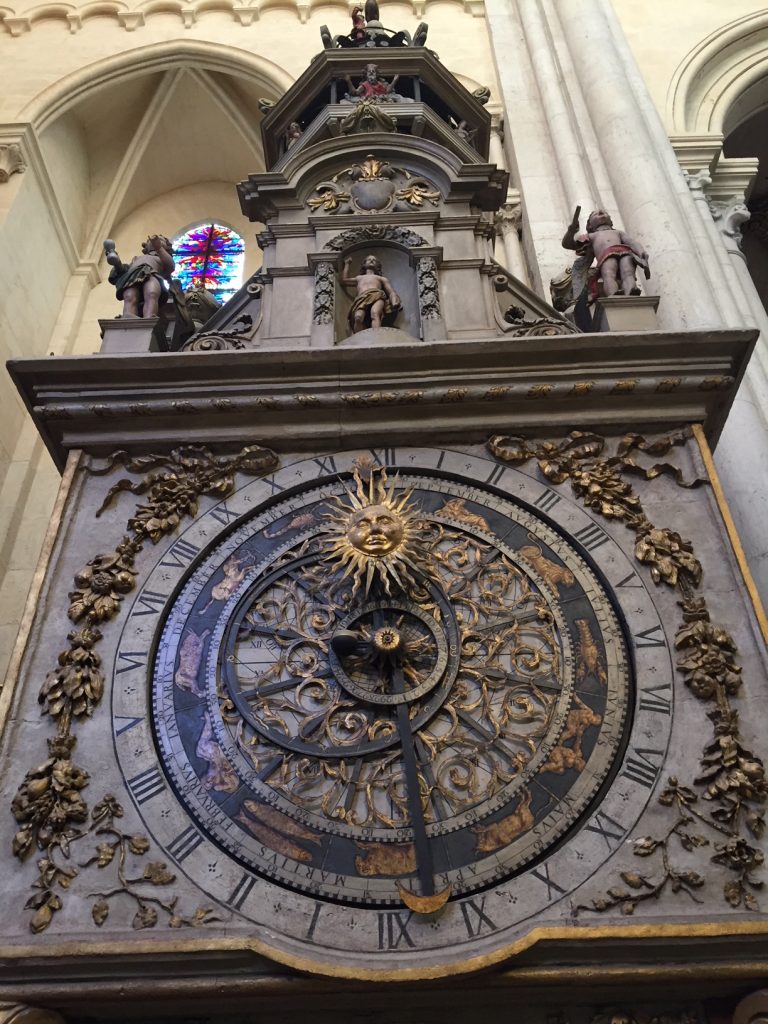 The astrological clock stands out in St. Jean Cathedral

Strolling Around The Old City

Paul shared more about the history of Lyon as we strolled along cobblestone streets. “Lyon became a big trading city dating back to Roman times. Most of the buildings were built during the Renaissance,” said Paul.  “You had big trading families who were wealthy. All cultures came to Lyon from Italy.” 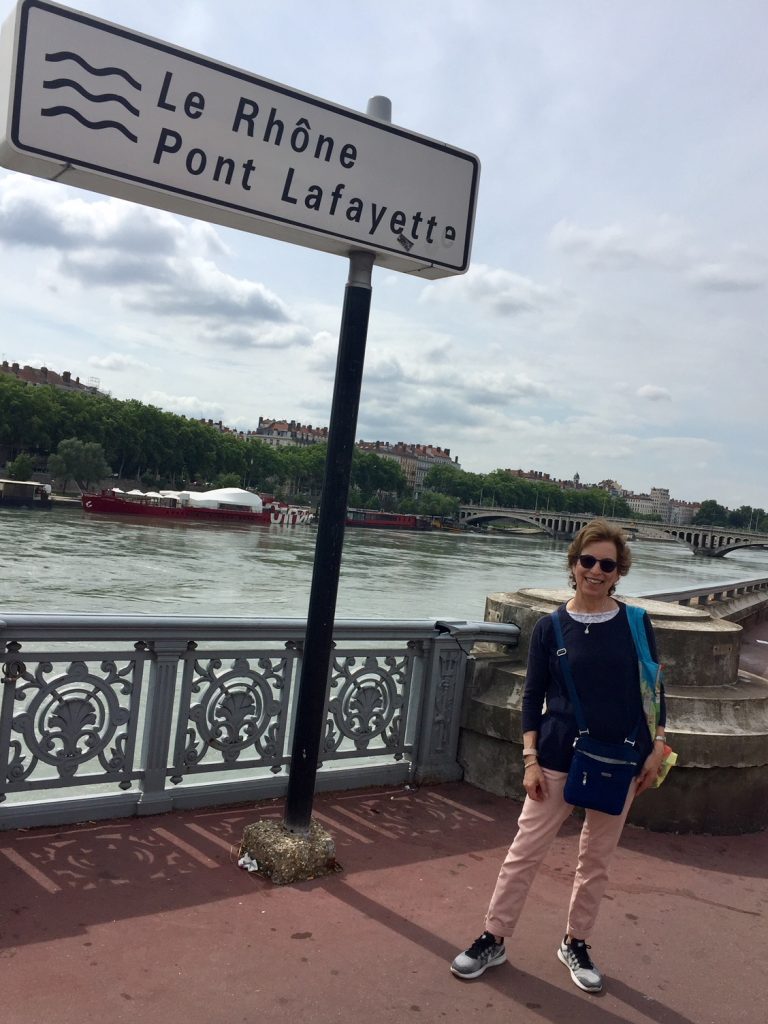 Lyon is situated along the Rhône and Saône Rivers

We passed Michelin-rated restaurants and learned about Lyon’s culinary heritage. “Lyon is the culinary capital of France,” said Paul. He described how the Michelin Guide originated. “People from the Michelin tire company traveled around and wanted to know where to eat,” he said. 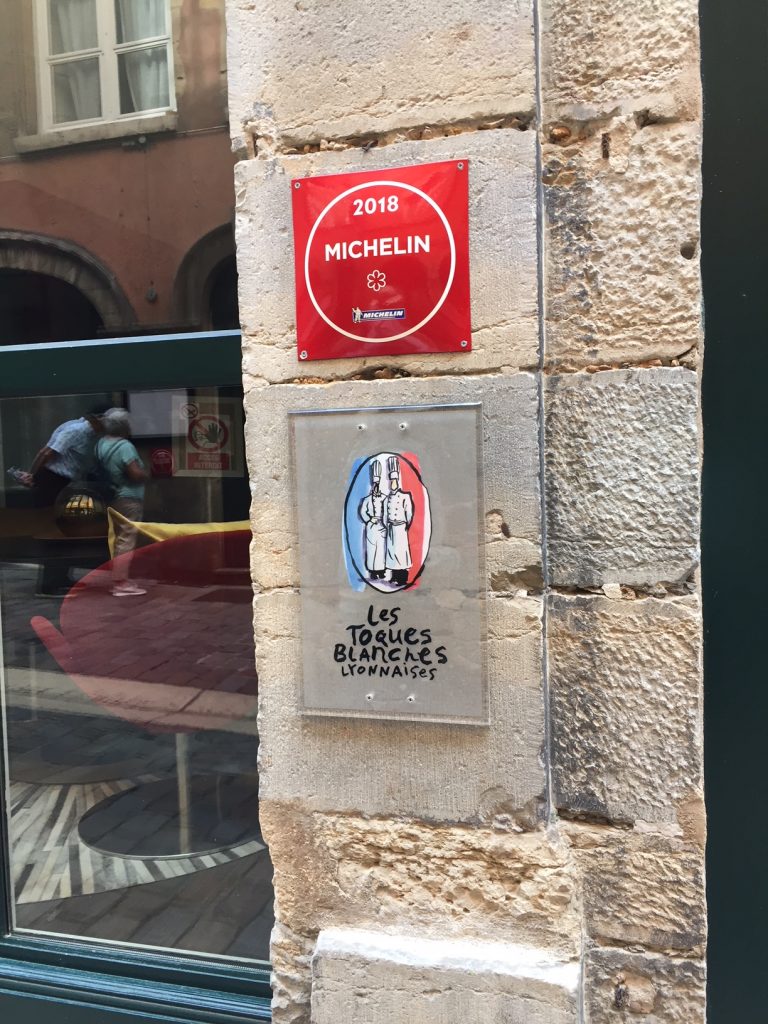 There are a few Michelin Star restaurants in Vieux Lyon

According to Wikipedia, the guide was originally developed in 1900 to show French drivers where local amenities such as restaurants and mechanics were. The rating system was first introduced in 1926 as a single star, with the second and third stars introduced in 1933. Based on the Guide, one star signifies “a very good restaurant”, two stars are “excellent cooking that is worth a detour”, and three stars mean “exceptional cuisine that is worth a special journey” 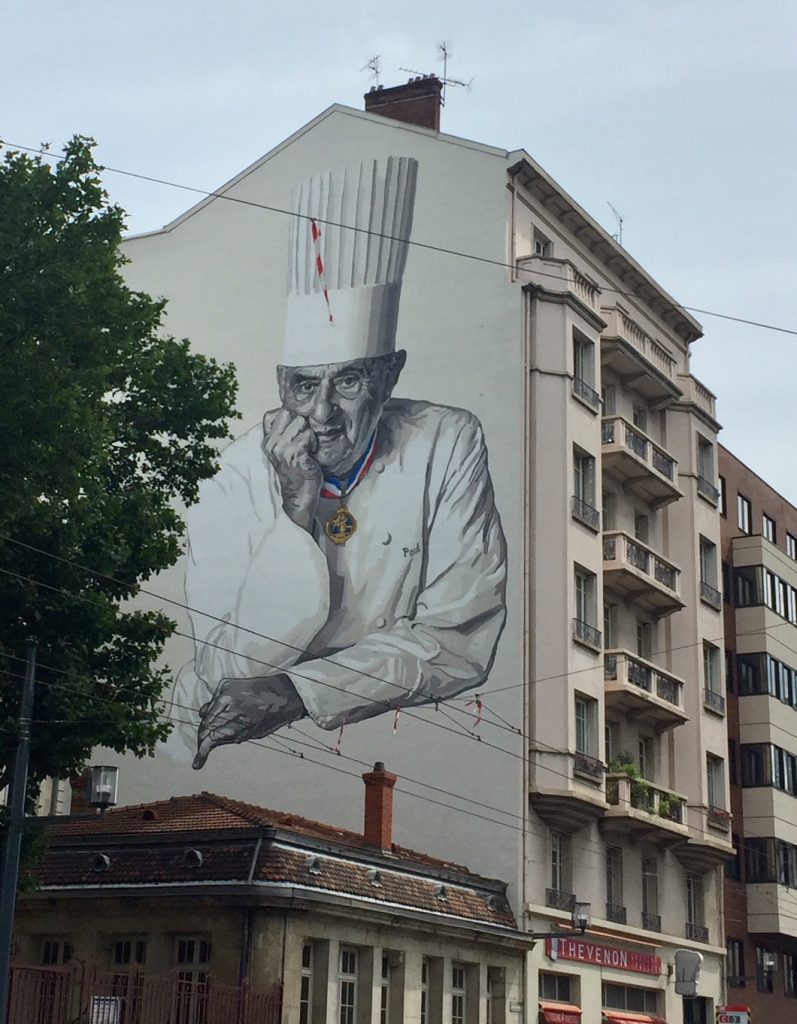 Paul indicated that there are several Michelin-star restaurants in Lyon, but the only restaurant with 3 stars is that of the late Chef Paul Bocuse, known for being the culinary king of Lyon. L and I did not splurge and eat at Bocuse’s restaurant. Another reason to return to Lyon. Maybe when we hit the lottery!

One of the highlights of Vieux Lyon are passageways, called traboules, hidden between buildings. Some are shortcuts to the river, others to the town’s main streets. Paul told us that during WWII traboules were used as hiding places for French resistance efforts. He also noted that if we wanted to learn more about traboules to check out the traboule app for smartphones. 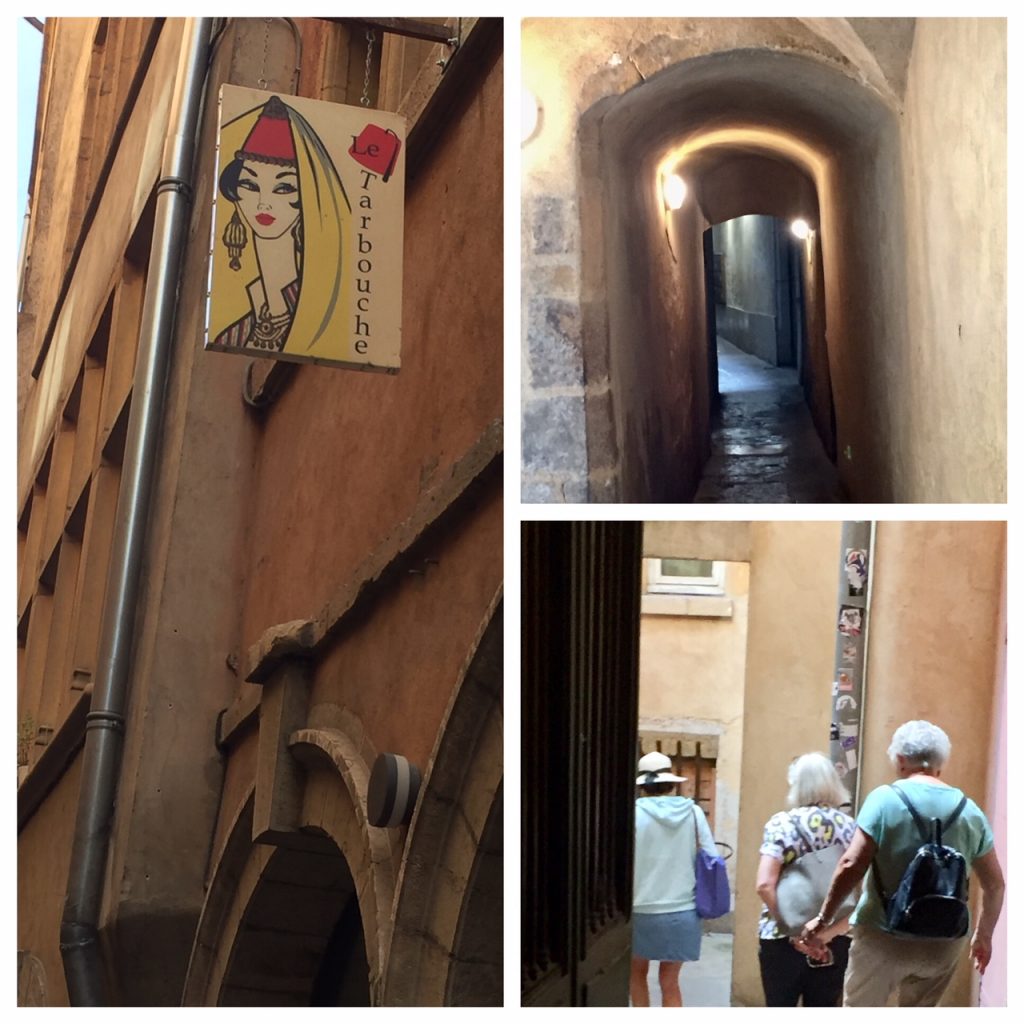 When in Vieux Lyon you must walk through the traboule passageways

“Ring the service button (only in the morning) and you can get into traboules,” said Paul. “That’s how the mailman enters. You can walk through the passageways, but just remember it’s a neighborhood. People live there.” 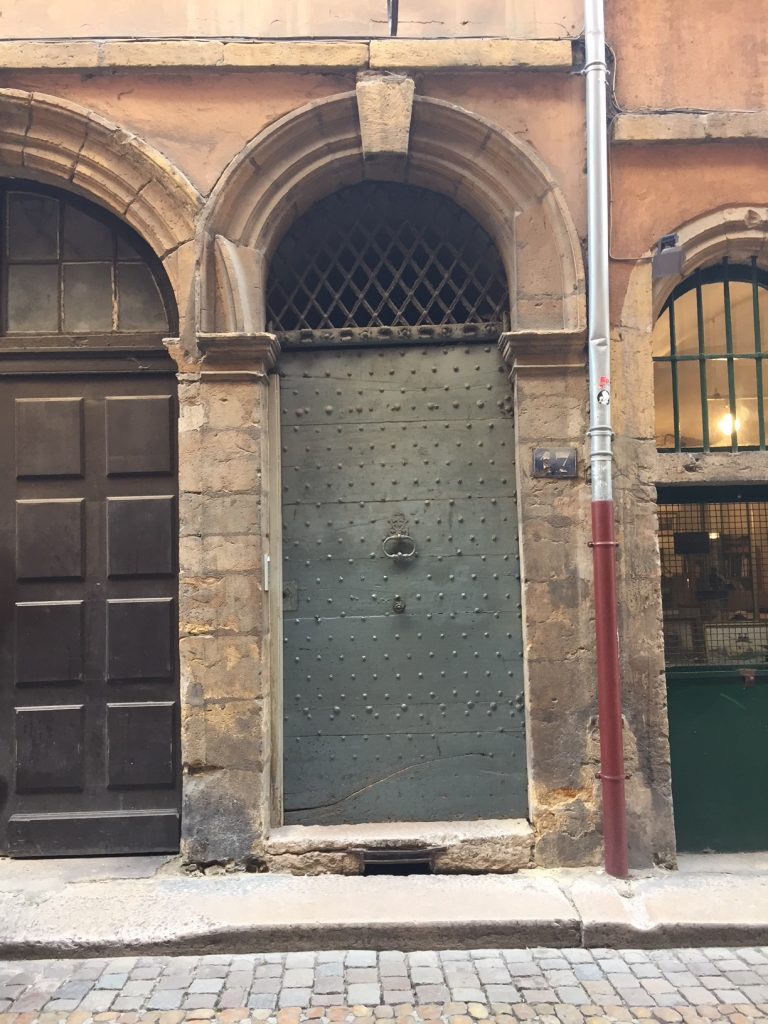 Wandering deeper into Vieux Lyon, brought us to Place de la Basoche. Its coral-colored Renaissance building and courtyard are often pictured in photographs and paintings of the Old City. The Musee Des Miniatures Et Decors De Cinema is located here. The building is one of about 300 old buildings remaining from the 15th century protected by the UNESCO. 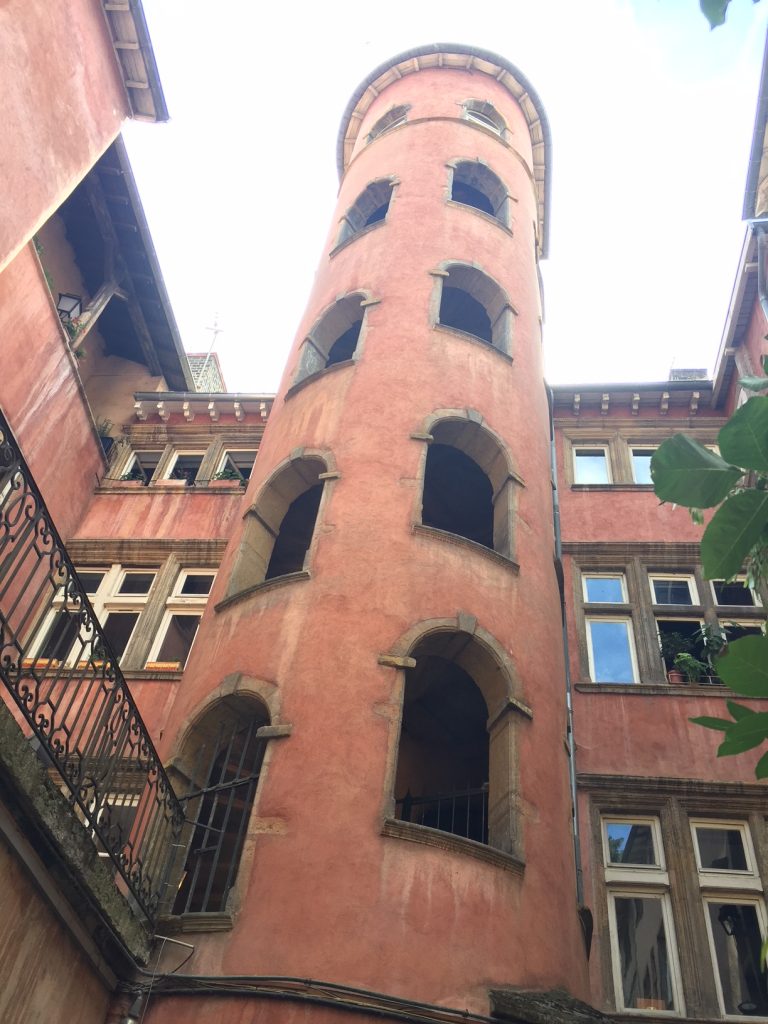 Place de la Basoche is an icon in Vieux Lyon

A community of artists and puppeteers

We passed a street with a theatre and acting school. “Lots of Artisans are here,” said Paul. We saw some of the drama students waiting for class. Each venue had a Code of Arms. 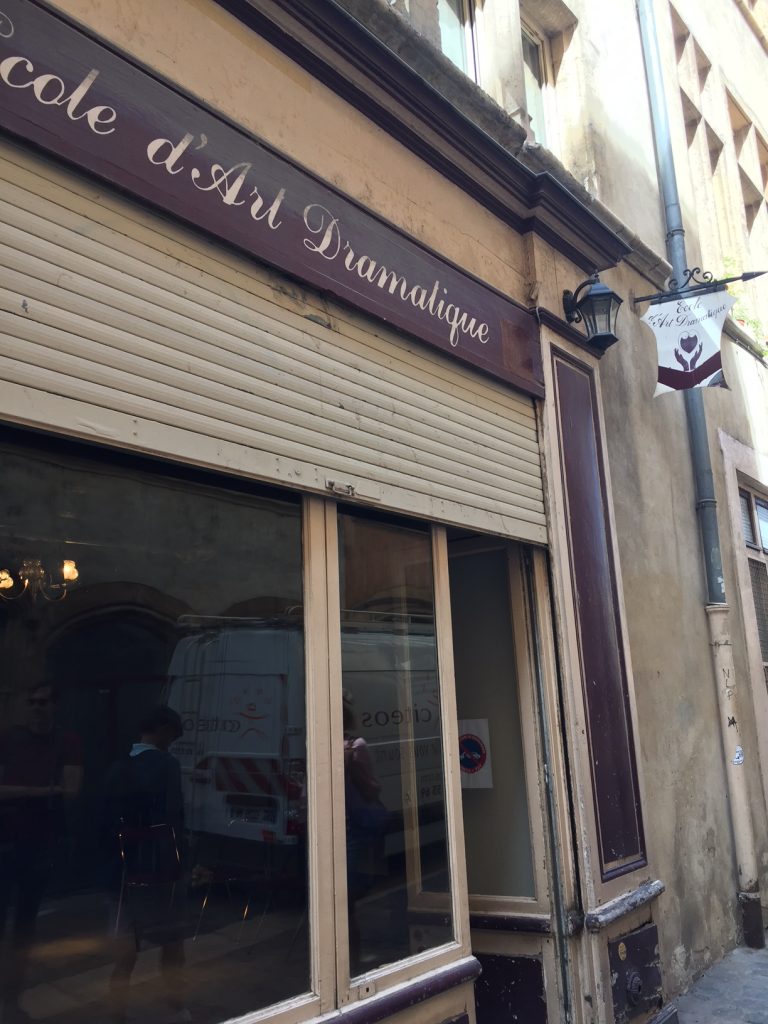 There is an artists community in Vieux Lyon, including an acting school

Vieux Lyon is also home to the art of puppetry. The most popular puppet is Guignol and you will see him in souvenir shops and paintings throughout Lyon. L and I weren’t a fan.  We both thought Guignol puppets look kind of scary, however we did find the story of his creation quite amusing.

Paul said that Guignol’s creator, Laurent Mourguet, was an unemployed silkworker who started to practice dentistry. According to Wikipedia, most dentists in the late 1700s in France simply pulled teeth. To attract patients Laurent created a puppet show. The puppet was so successful that dentistry fell by the wayside.

We didn’t have a chance to visit the Musee Gadagne which includes the Lyon History Museum and the Puppets of the World Museum. Will have to save those two for another trip. 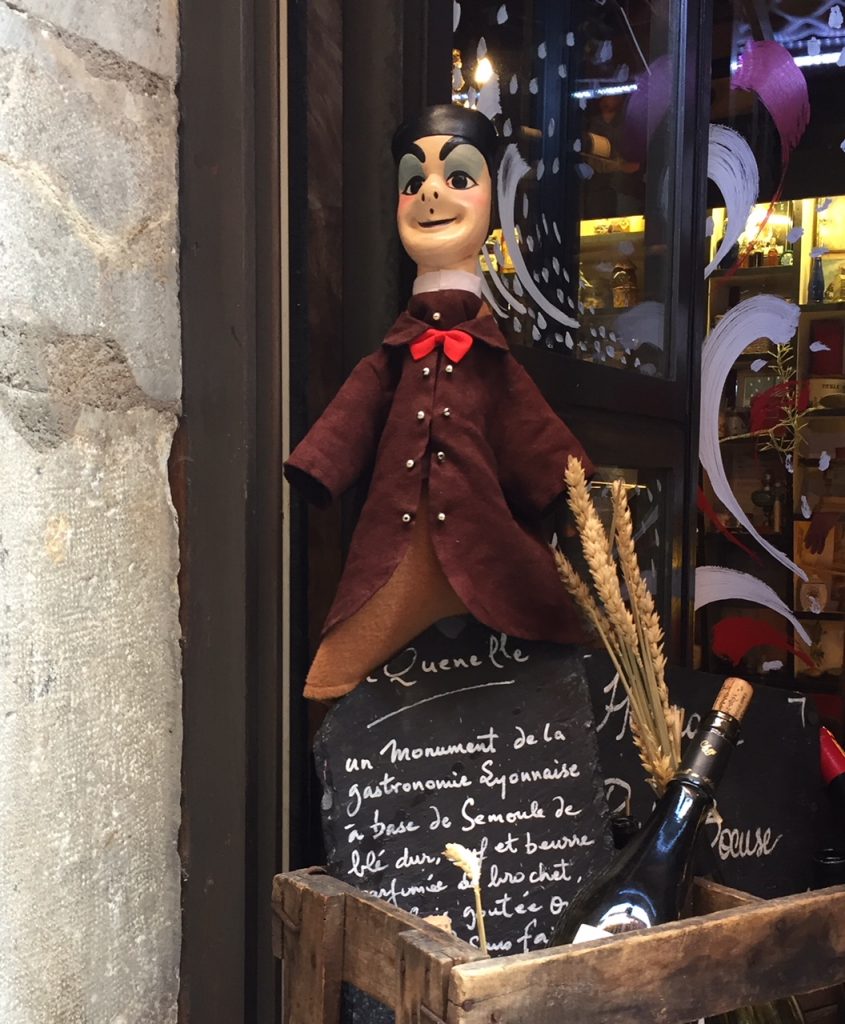 The most popular Lyon puppet is Guignol

Dining at a bouchon

After two hours of walking, Paul left us by a square with several bouchons. These local eating establishments can be found all over Lyon. “Bouchon is a traditional hole in the wall restaurant. Women started bouchons. They made home-cooked food for working class people,” said Paul. He advised us to study the menu and know what you are ordering. ” Bouchons are the best places to eat pig colon,” he said. Ooh, ooh, ooh, I’ll pass on that culinary delight. (Note: TheFork is a good website/app for making restaurant reservations in Lyon.)

L and I dined at one of the local bouchons in Vieux Lyon. Thankfully, L understood the French menu so we didn’t order any intestines. I did try quenelles which are a Lyonnaise favorite. My quenelles were made with fish and served in a creamy sauce. They reminded me of dumplings without the skin. They were so good, so good, so good. 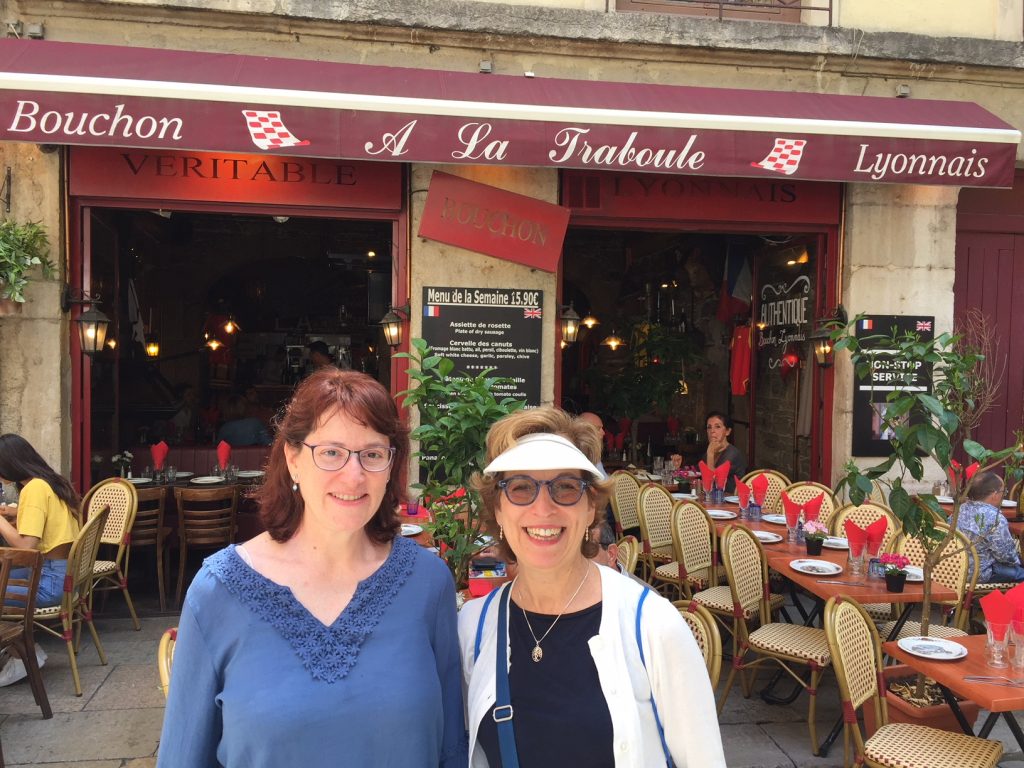 L and I ate at a local bouchon in Vieux Lyon 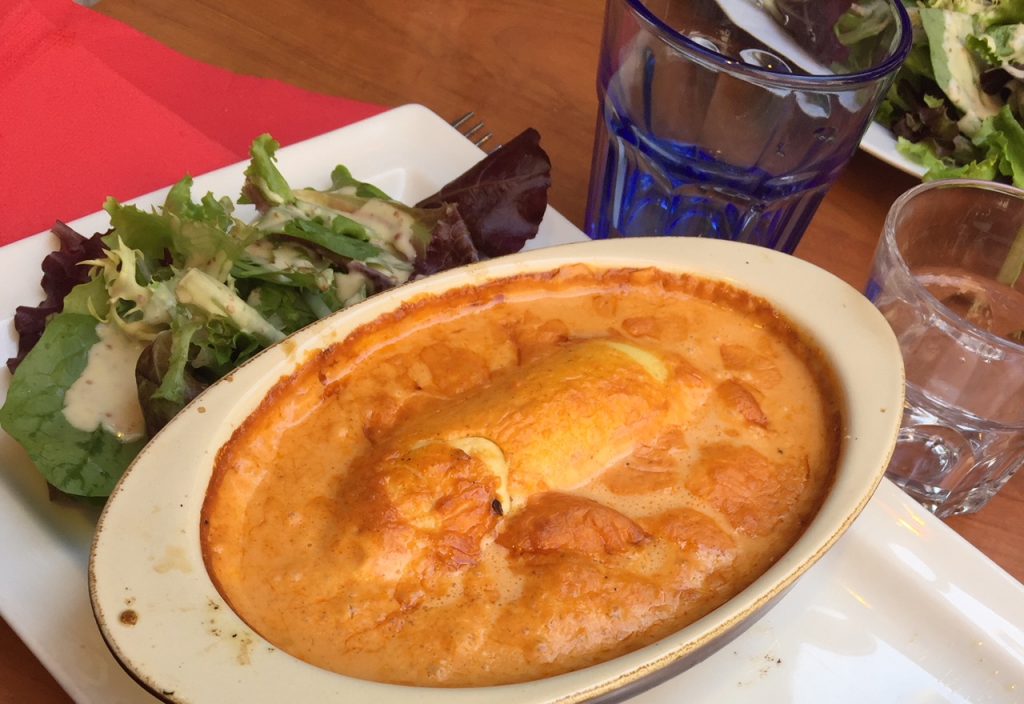 Quenelles are a Lyonnaise cuisine specialty

Au revoir mes amis. I was sad to leave Lyon and know I will be back one day. I adored this city and encourage you to visit.

Oui mes amis, we’ll be in Paris soon. A food and city tour of Montmartre awaits.

In case you missed my earlier posts of my visit to Lyon you can find them here:
♥ Bonjour! My Birthday Visit To The Lovely City of Lyon
♥ Appreciating Centuries of Silk Weaving At Maison des Canuts