I am back from France and I had an amazing and delicious time with mes enfants – my daughter A and my son D. I have so much to tell and pictures to share – but don’t want to overwhelm you with everything all at once. Rather, let’s take things slowly so you can enjoy the journey. I’ll start with a blog post or two on Paris, then I’ll follow with a post on Provence and then another on Nice and maybe even one or two more as an extra bonus. From the city to the country and then to the beach – you’ll see it all. By the time I’m done during the next few weeks, you’ll want to book your own trip to France – guaranteed.

Ready for take off

I was when I arrived at Newark Airport two weeks ago and was waiting in line to pass through security. “Are you wearing Jimmy Choo’s?” said an executive boomer girl, who I noticed was wearing real Chanel flats, as she admired my silver-tipped black shoes. “No, they are Tahari,” I replied. “I am off to Paris for vacation.” “Well, well you are going to fit right in with fashionable Paris. Have a good time” she said. (Choo, Choo, Jimmy Choo – I knew it was going to be a good trip if someone thought I was wearing Jimmy Choo’s. I had read in Rick Steve’s FRANCE 2013 Guide that it is important to be stylish when walking the streets of Paris and other parts of France. I was ready!)

The trip on United Airlines went well and we landed in the very large Charles de Gaulle airport about eight hours later, tired from not having slept  much on the plane. While we had booked the Super Shuttle in advance, it was nowhere to be found. When I called all the messages were in French so we ended up taking a cab to our apartment.  (We booked our lodging for our entire trip on airbnb.com, which provided excellent service with all apartments in good locations.) The owner A met us at the St. Germain studio, which would become our home for the next four days. It was a lovely spot with a garden in the entryway and a loft with two beds above for A and D. I slept below – no ladder climbing for me. 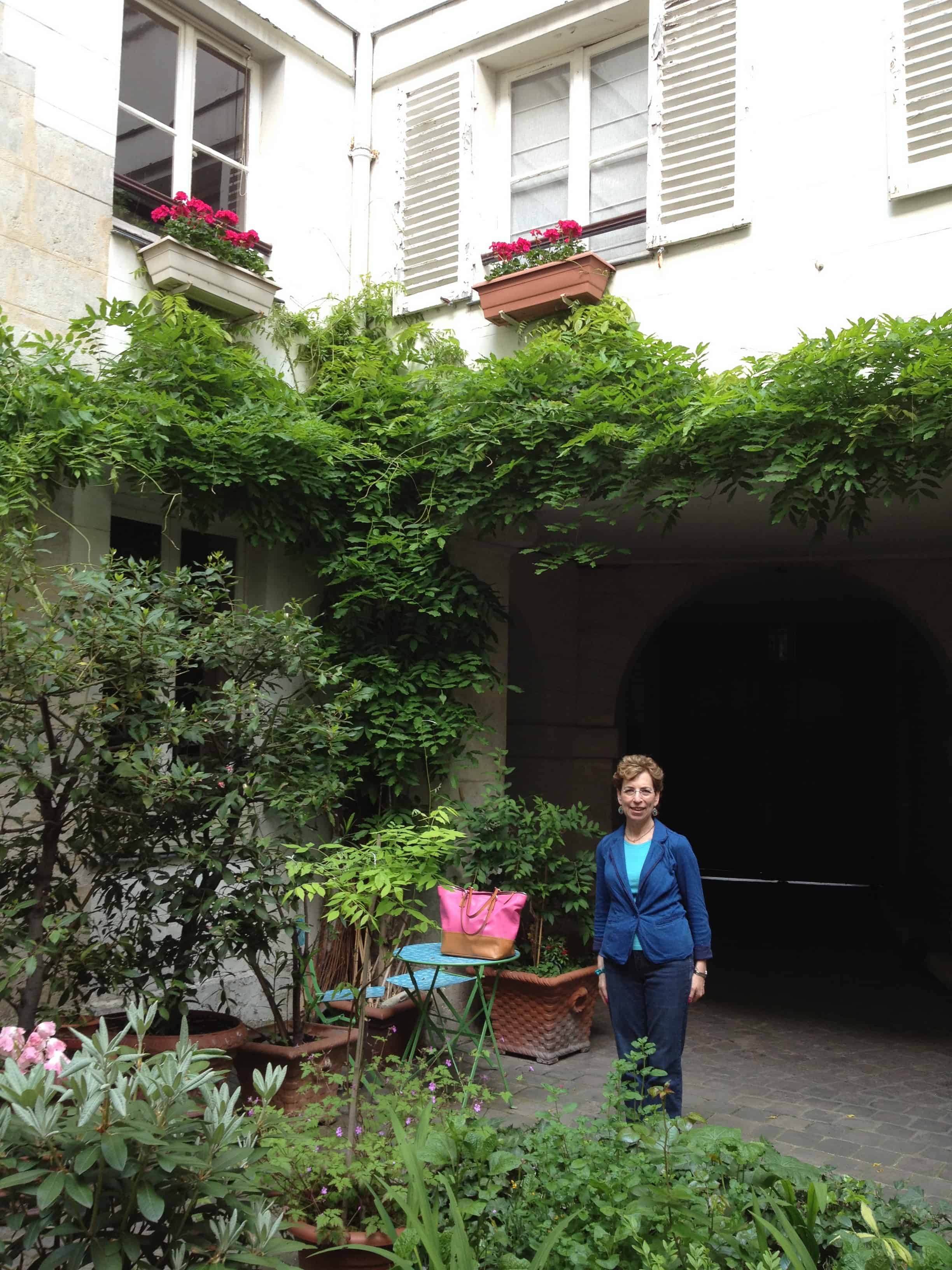 Our apartment in Paris had a lovely garden.

Being weary travelers, we didn’t venture too far from home that day. Instead we stayed nearby for dinner at a local bistro and then went to the fabulous Maison Larnicol for kouignettes, delicate pastries that my son D had enjoyed during his last trip to Paris. We indulged in a sampling of four flavors – chocolate, pistachio, rum raisin and natural. Home, home we went and like goldilocks and the three bears – we ate every last crumb. 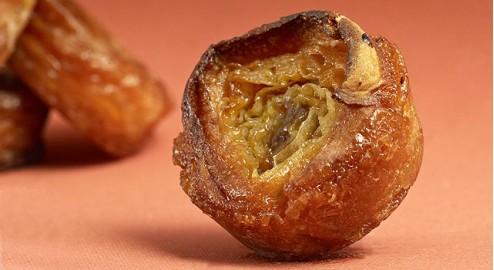 After a good night’s sleep (one of my only good night’s sleep during the trip since my night sweats and menopausal moments were acting up throughout the 10 days), we put on our walking shoes and were off to the sights and sounds and smells that make Paris one of the most beautiful cities in all the world.

First came the croissants and cafe American for breakfast, then the Louvre to see the famous Mona Lisa, followed by a walk through the Tuileries Garden (where I fell so in love with the olive trees and wanted to take one home), a stroll up the Champs Elysees (with a pit stop at the largest Louis Vuitton shop – four floors worth of handbags, wallets and clothes. Did my daughter A purchase a new Louis bag? Did she? Did she? Did she? Not yet. Not yet. Will she or won’t she by the end of the trip? Stay tuned.) 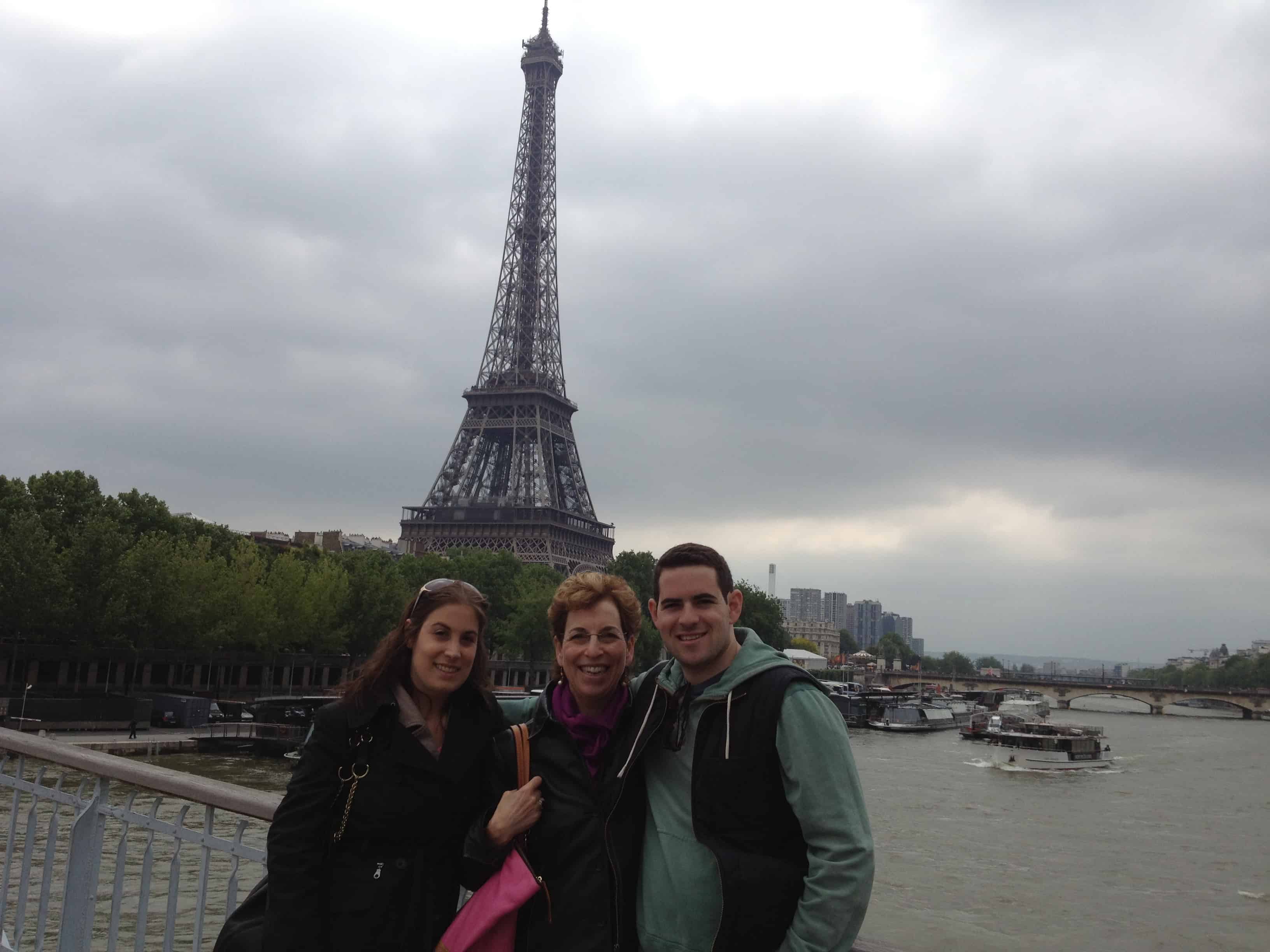 A picture in front of the Eiffel Tower is quintessential in Paris.

It grew chilly and damp, but on we walked along the Seine to the Eiffel Tower and all the way home to our apartment to give our feet a rest. A baquette and some cheese to snack on, a little nap and it was time for our evening meal. All the bistros have outdoor seating so you can watch the passersby in their Parisian fashions. It stays light out in Paris until about 9:30 or 10:00 p.m. so who wants to sleep?

Oh me, oh my – I haven’t even gotten to Saturday or Sunday yet and I’ve maxed out my word count. Think you will have to wait to hear about our weekend in Paris in the next post.  C’est la vie. It’s coming soon. For now, I think I’ll end with a favorite quote by Ernest Hemingway. As Ernest says: “If you are lucky enough to have lived in Paris as a young man, then wherever you go for the rest of life it stays with you, for Paris is a moveable feast.”

Speaking of feast – I’m going to eat my leftover roasted chicken herbes de provence for dinner prepared with some of the herbs I brought back from Provence. I made it for my boyfriend L yesterday so he could get a taste of Paris. It was quite tasty.