A Walking Tour of Berlin: Being in the Present, Remembering the Past 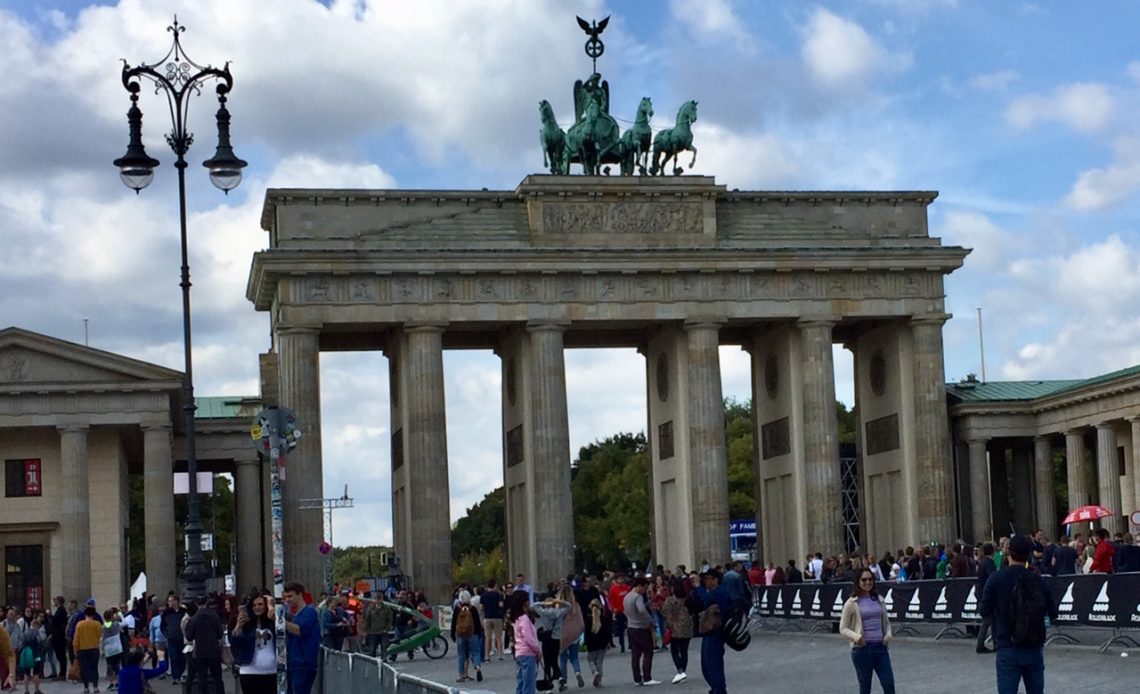 “Are you ready to explore Berlin?” asked our guide Georgia, as she welcomed us for our 4-hour walking tour of Berlin. I was looking forward to being in Germany’s capital for two days before boarding the Viking Star for a cruise through Viking Homelands. My voyage was compliments of Viking Ocean Cruises* and my lucky traveling companion was my sister N.

Since our stay was brief, I wanted to make the most of our visit. Besides sampling the cosmopolitan cuisine during our evenings in town (read about the great restaurants in my earlier post), sightseeing during the day was a top priority.

“First time in Berlin? This is the perfect tour for you! Visit all of Berlin’s most famous sights and hear the secret stories that make the past come to life,” said the description on Original Berlin Walks’ website. The company offers a variety of group tours of Berlin. This one called Discover Berlin sounded like an excellent fit. It had an English-language itinerary, was only $14 euro per person, and was available on Saturday morning. Note: I booked tickets in advance. 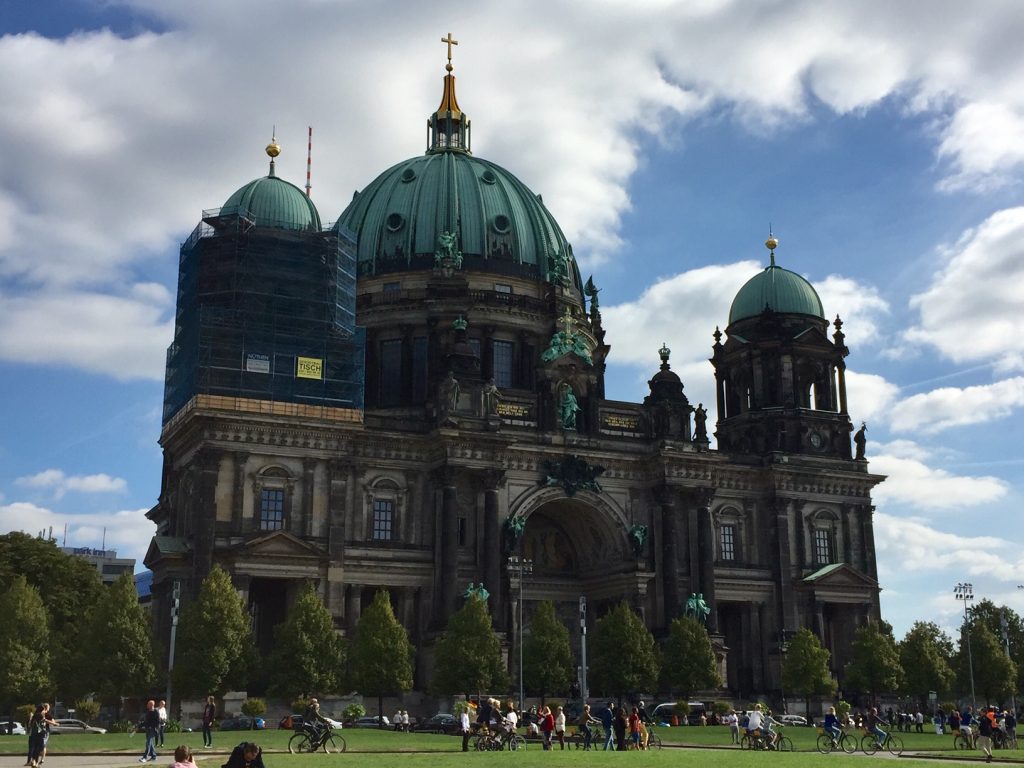 Learning About Berlin Step by Step

I wasn’t sure how I would feel in this city garnered with such a backstory. Having recently read the Tatoosist of Auschwitz, the reminders of what happened in Germany during WWII were front and center. I was apprehensive about seeing sites that I had  learned about in history class and seen depicted in novels and movies. It sent some shivers through my spine.  But I was eager to explore this city’s historic landmarks, better understand its contemporary culture, and remember and learn from its past. 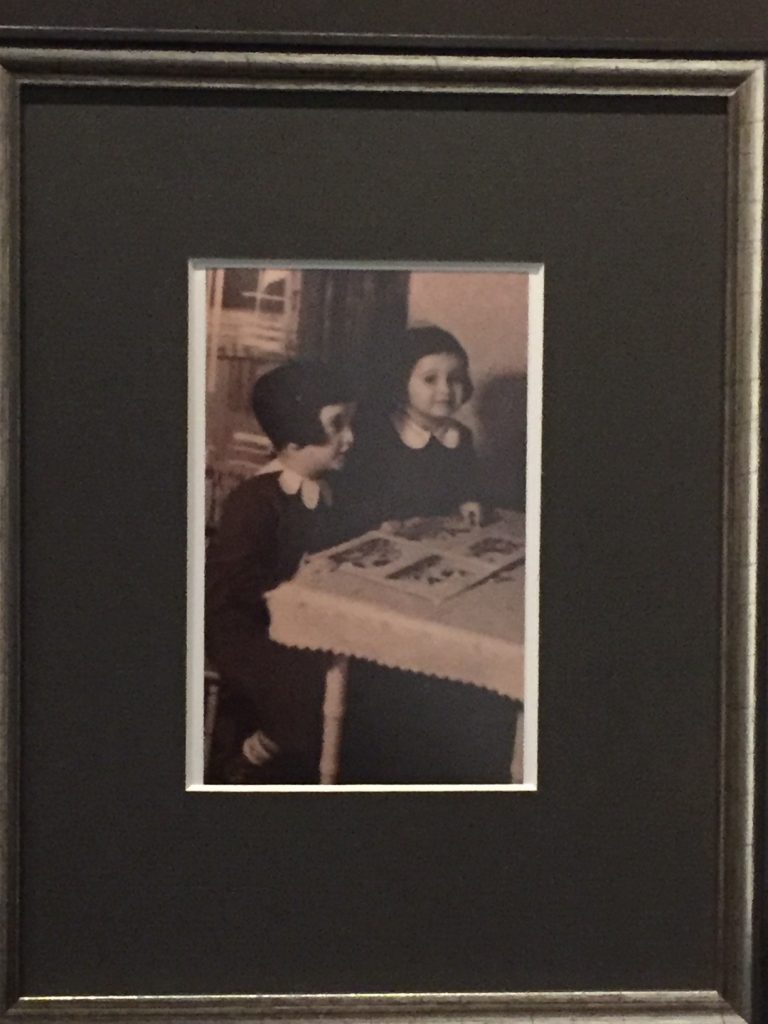 These children were taken to Auschwitz during WWII and never survived. They are remembered at the Berlin Jewish Museum.

We took the S Bahn train to Hackescher Market to meet our guide Georgia. Ooh, ooh, ooh, I was so proud of how we navigated the Berlin train stations, arriving exactly at 10:00 am and in the correct spot at the Market. Go Judi! Go Judi! Go Judi! 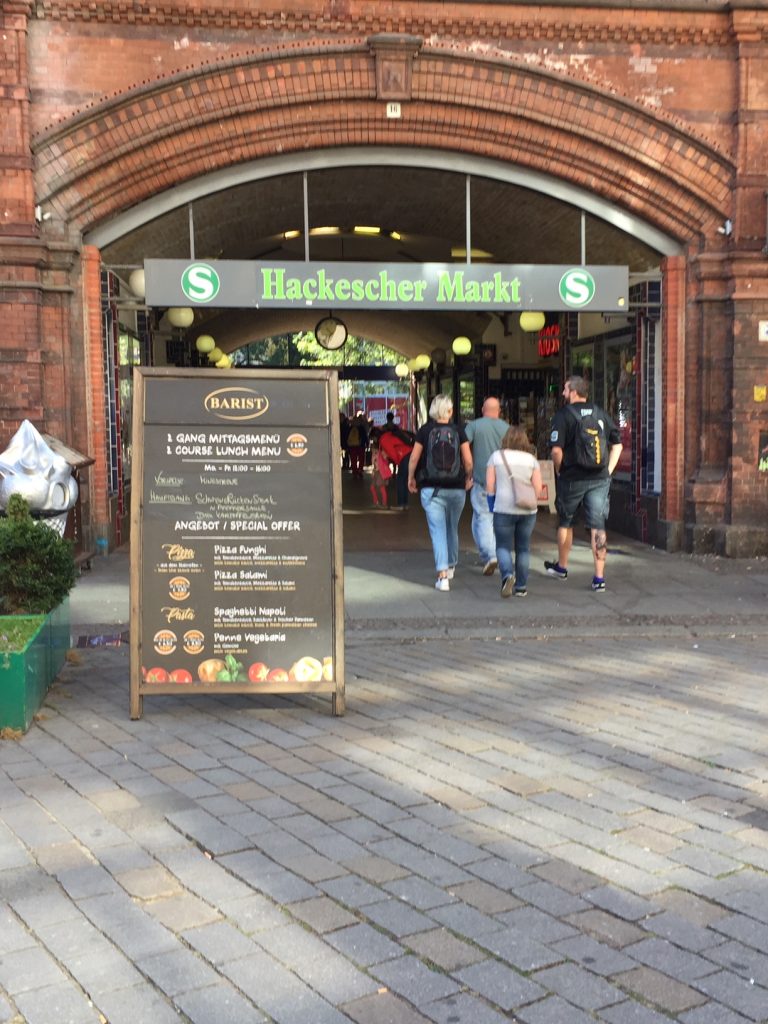 We met our tour at Hackescher Markt.

It was a warm sunny day and our tour was about to begin. Georgia told us that she was born in Scotland and had a Masters in German. “It’s a pleasure to introduce Berlin to people each day,” said Georgia.

As we walked to Museum Island, she shared highlights of the city’s history from its early days in the 13th century when it was the kingdom of Prussia, to its wars with Austria, Denmark and France, to its destruction in WWI. 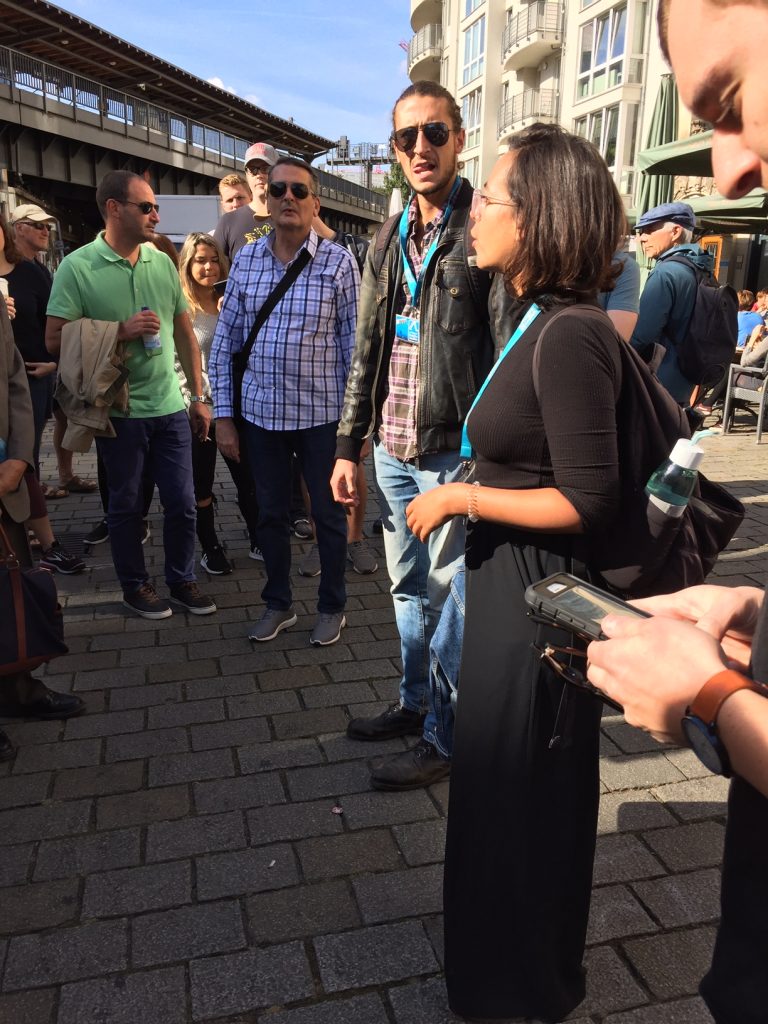 Our guide Georgia was very knowledgeable about Berlin history.

“After WWI, there were many issues. Two million people died in WWI. Half a million died of hunger,” said Georgia. (Last week was the 100th anniversary of the end of WWI. The New York Times says that during WWI, “maps were redrawn in ways still felt.”)

After WWI came the depression in 1929, followed by the wake of the Nazi party, Hitler’s takeover in 1933 and it’s division to East and West after the Germans lost WWII. “In May 1949, the Soviets backed down. West Germany became its own country and East Germany became a separate communist country. You were either East German or West German,” said Georgia. “The Berlin Wall was built in 1961 and came down in 1990 when Germany was unified.”

“Berliners are doing well today and it is a credit to how they dealt with a very dark history,” said Georgia

The massive Museum Island was our first stop. There are five museums on the island including the Old National Gallery, the Neues (New) Museum, the Pergamon Museum,  the Altes Museum and the Bode Museum. 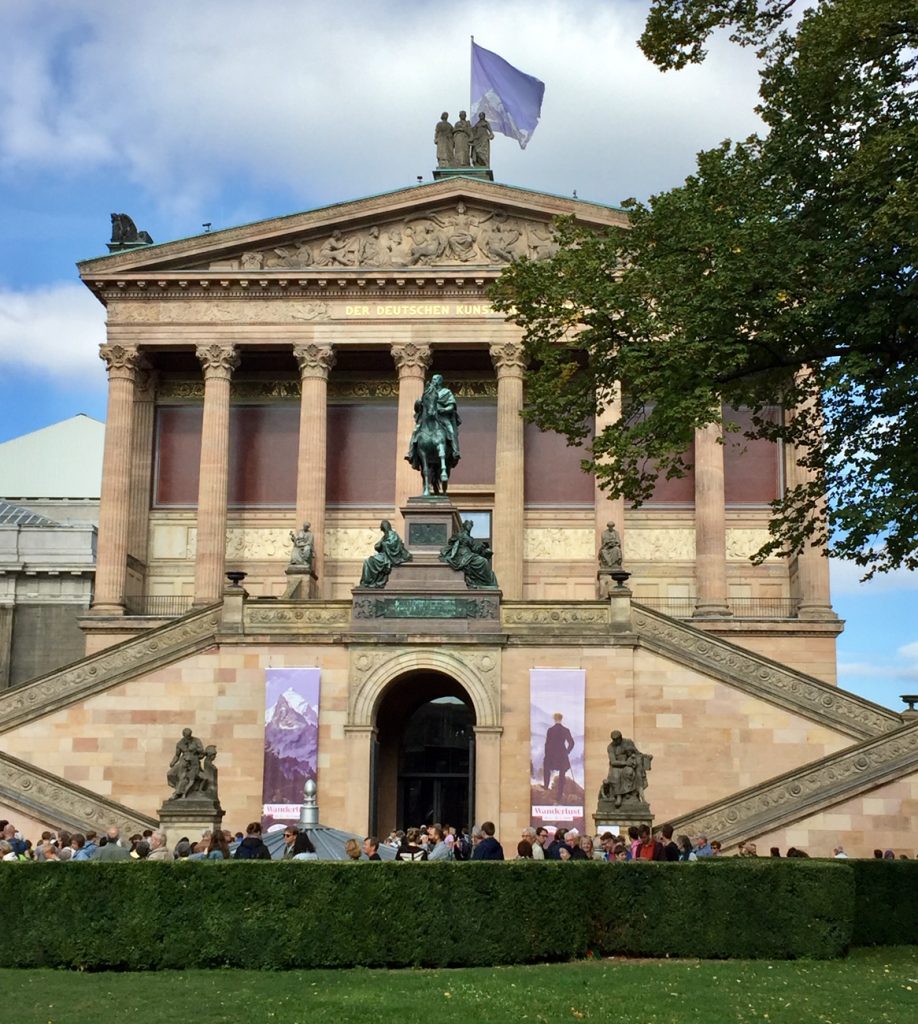 Neues Museum is is one of 5 museums on the island.

Georgia pointed out the Television Tower (also know as the Fernsehturm) in the distance. It is the tallest building in Berlin. She suggested we go there at the end of our tour. You can go up in the tower to get a great view of all of Berlin. Sadly we didn’t have a minute to spare — next time! 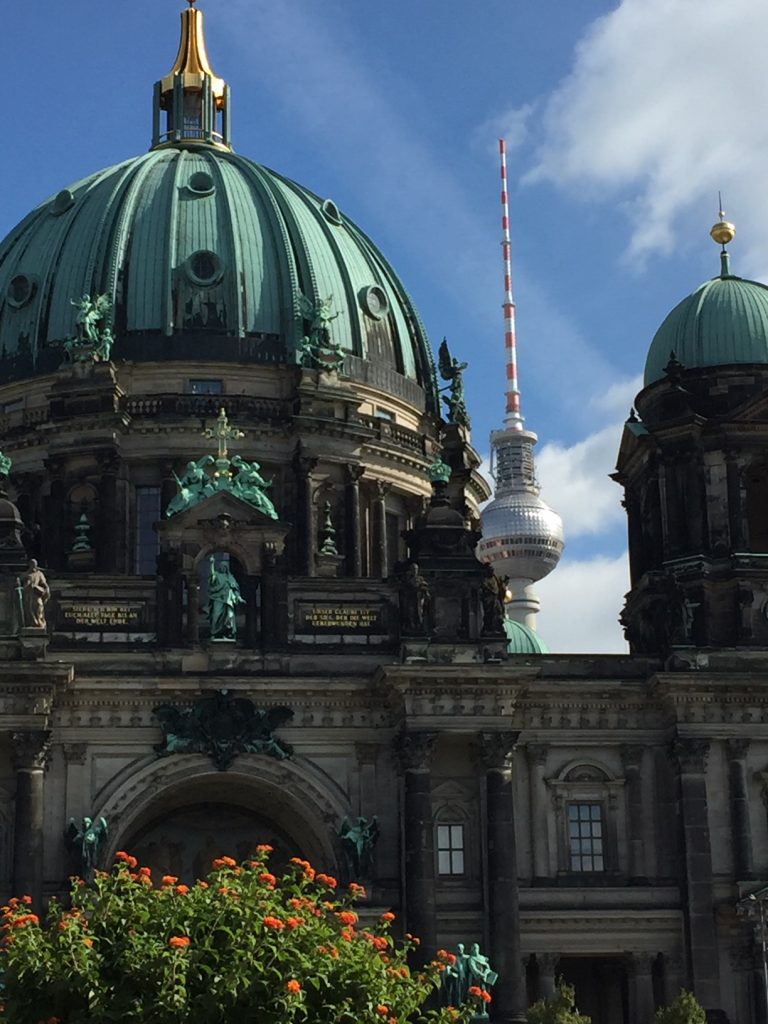 Can you see the Berlin Television Tower in the distance?

A Walk on the Royal Boulevard

After leaving Museum Island, we walked along the Royal Boulevard, known as Unter den Linden. We stopped at the Neue Wache Memorial, which honors the victims of war and dictatorship. It is a meditative place, with a skylight shining down on a  statue called Mother and Her Dead Son. 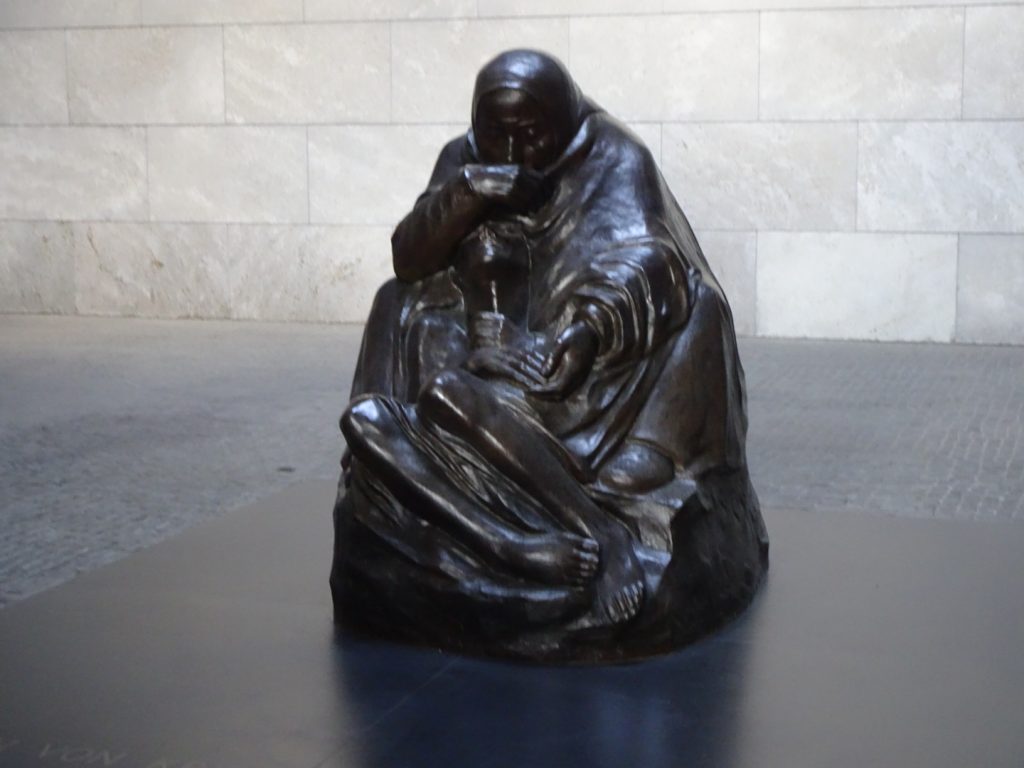 A statue of a mother and her dead son sits in the center of the War Memorial.

Upon leaving the Memorial, Georgia pointed out the bomb marks on the columns. “Berlin was the final battle ground in WWII,” she said. “There was so much rubble. It was a major target of destruction. 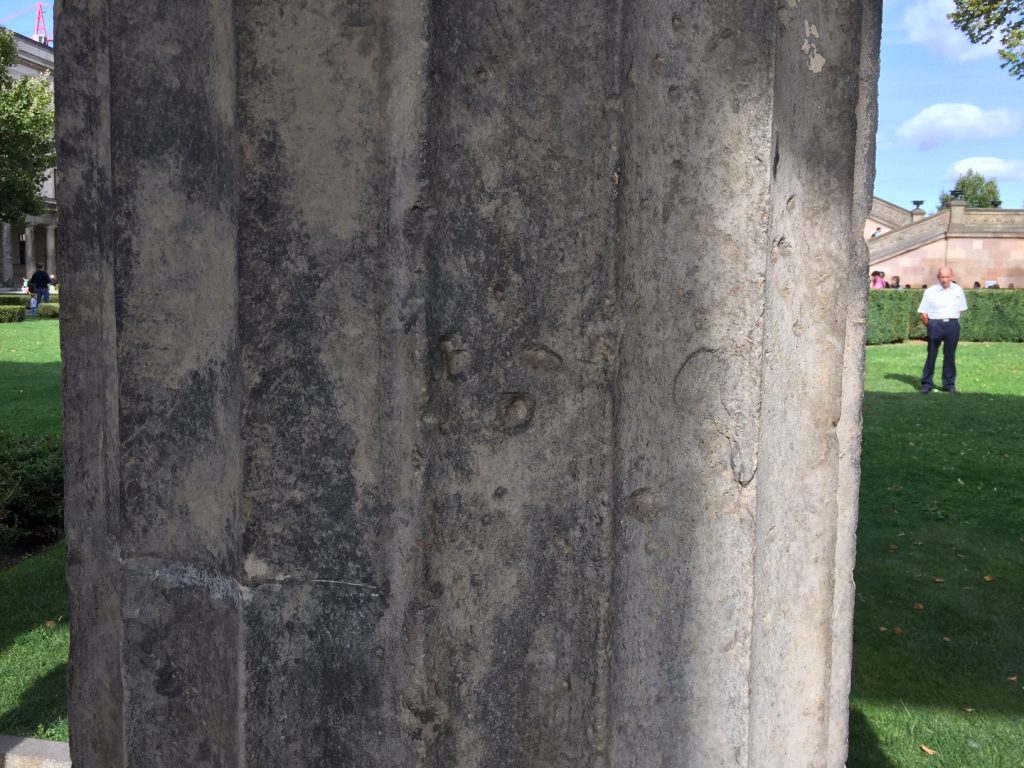 Remains of the blasts from WWII.

We passed by Humboldt Universitaet,  one of the prestigious universities in Germany. If you watched the National Geographic Genius series about  Albert Einstein, you would have seen him in front of this building. Einstein taught here until the Nazis came. Nearby was the old library, where Georgia guided us to look down through glass in the ground where there are empty book shelves. “In 1933 national socialist students burned 20,000 books in the library,” said Georgia. 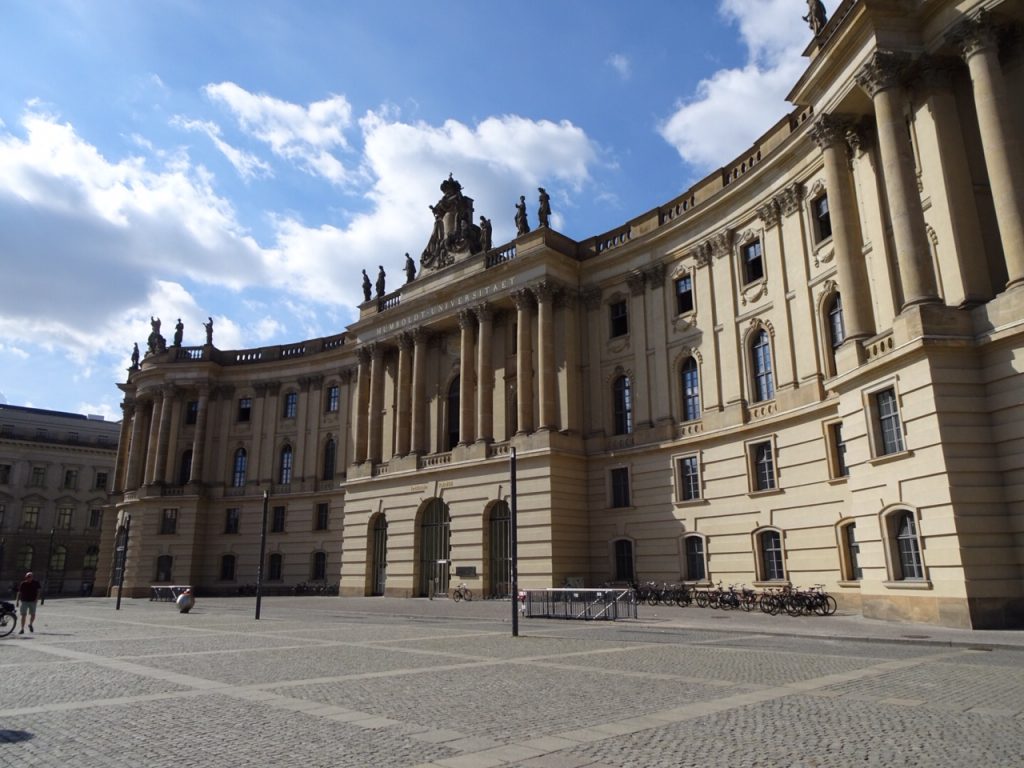 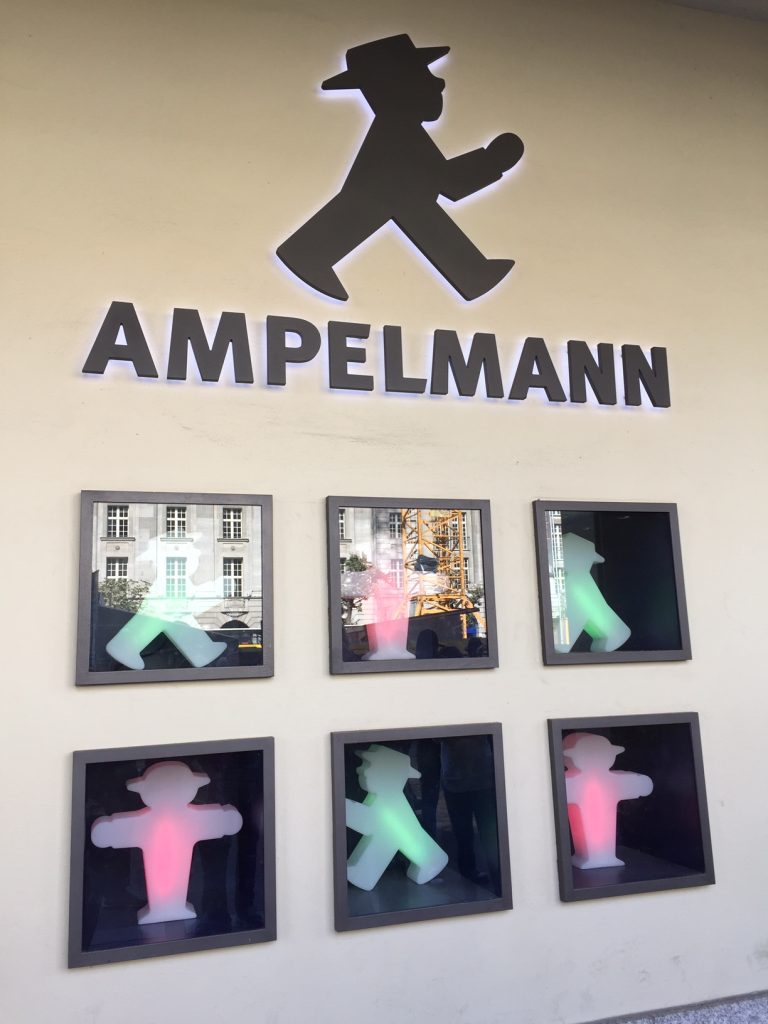 You know you are in East Germany when you see Ampelmann with a hat.

Being mindful of the traffic light man, we all arrived safely at Pariser Platz,  the most prestigious address in Berlin. The iconic Brandenburg Gate is here, as is the fancy Hotel Adlon, where celebrities and dignitaries stay. The U.S. and British embassies are also located here. 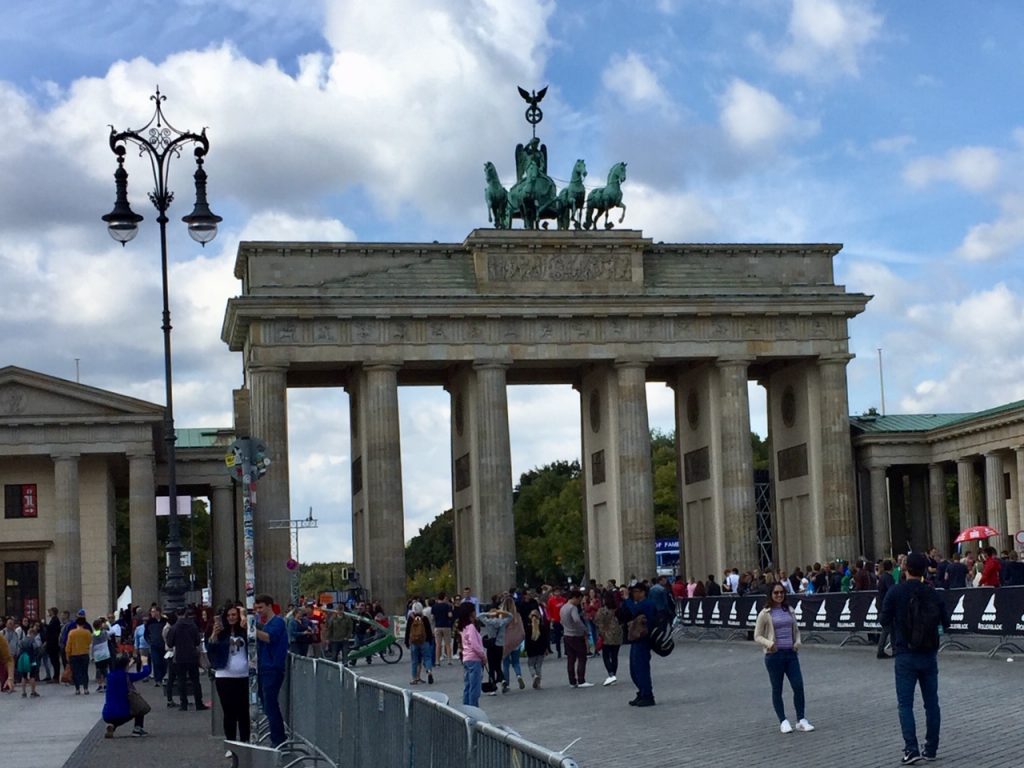 Brandenburg Gate is one of the most popular landmarks in Berlin.

Memorial to the Murdered Jews of Europe

Down the block from the Brandenburg Gate and in the middle of the city sits the Memorial to the Murdered Jews of Europe. This very contemporary Memorial  opened in 2005 and cost $27 million euro to build. All the blocks are made of concrete. It stands as a reminder of  the six million Jewish lives that were lost during the Holocaust, when entire communities were wiped out. 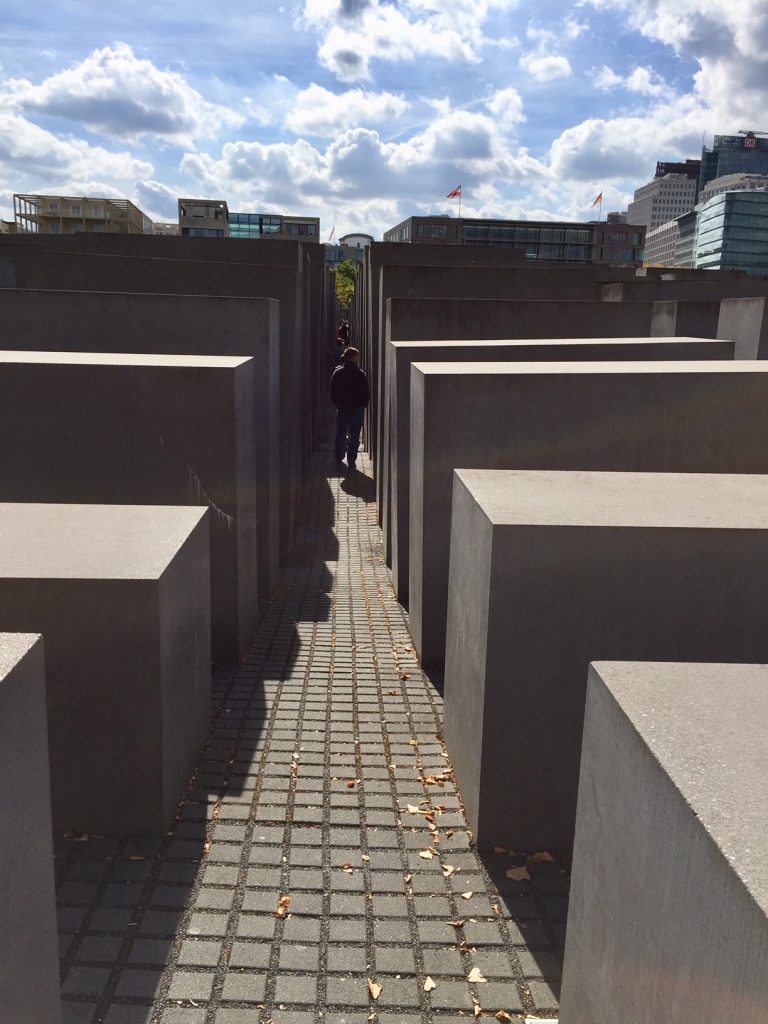 Memorial to the Murdered Jews of Europe is in the middle of the city.

Per Georgia, German Chancellor Angela Merkel said that: ‘The Memorial is here as a reminder of what happened and it should never happen again. It is not to just remember those who died, but to act as calls to action for the living.”

“Whatever you see is what you see,” said Georgia as she encouraged us to experience the Memorial on our own. Note there is a museum underneath the Memorial but it was closed the day we were there.

With almost two hours down and after a quick break, the second half of our tour would focus more on remembering the perpetrators.

Georgia led us to a parking lot. “Today, there is a car park area where Reich Chancellor Hitler was hidden underneath in a bunker,” she said. “He got married the day before he killed himself. He took cyanide and shot himself. Hitler was identified by his teeth. He wanted to be cremated so no remains would be there.” It was amazing to think that where we were standing in the middle of a parking lot was where the bunker of this evil man was stationed so many years ago. 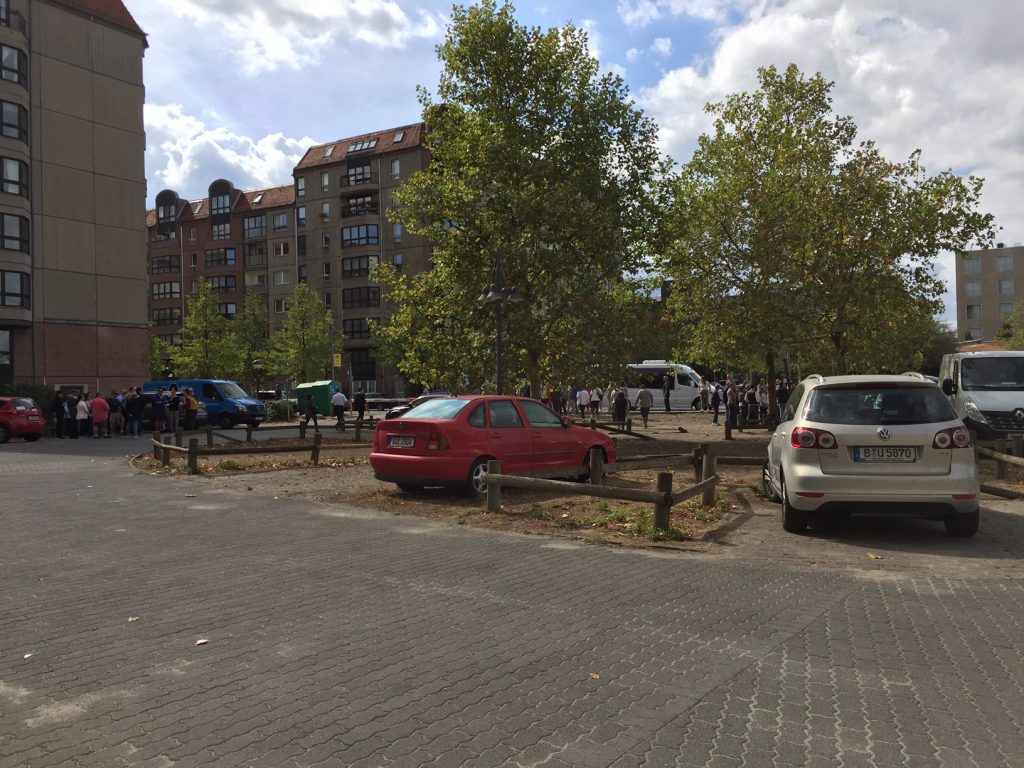 We stood in the area where Hitler’s Bunker was located during the end of WWII.

We passed the old Nazi government district and crossed the road to the west of Berlin to see the remains of the Berlin Wall. “In the old days if you climbed the wall you fell into the death strip which was sandy with nails underneath,” said Georgia. “In 1960 the city of Berlin was cut in two. If your city where you lived was on one side of the Wall and you worked on the other side, you lost your job. When the Wall went up if your friends were living on the other side you might have never seen them again. If you lived in the east, you stayed in the east. There was no freedom of movement, ” she added. 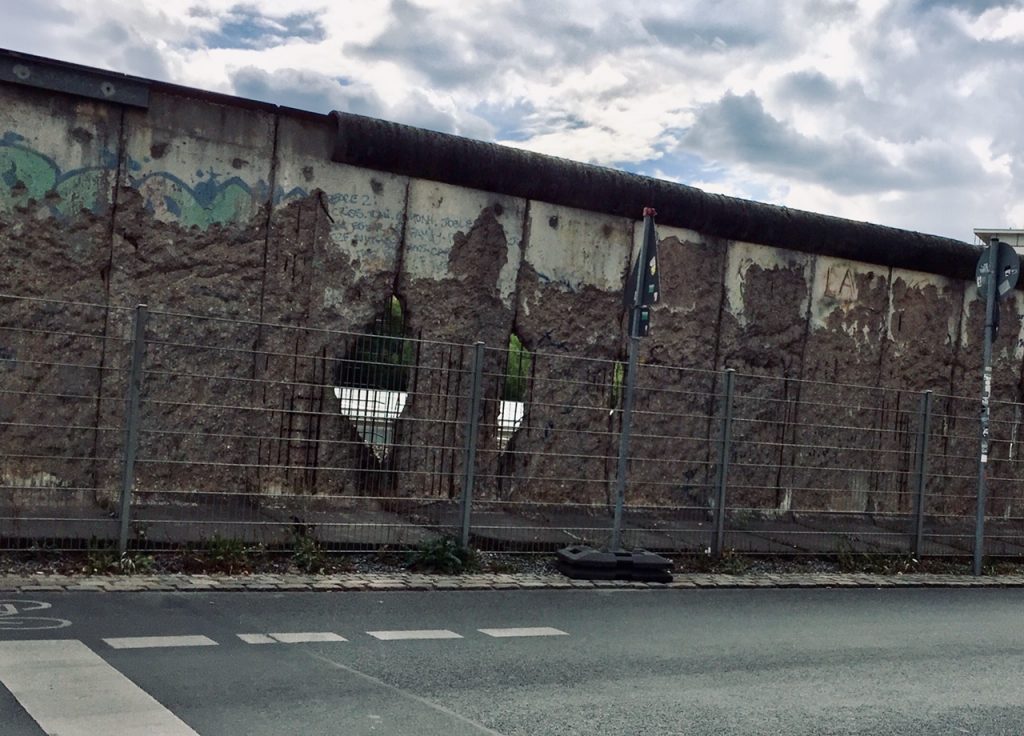 The Berlin Wall came down in 1990, but remnants remain.

A few steps from the Wall remnants is Checkpoint Charlie, made famous in many thrillers and spy novels. “This was just checkpoint C. It was the checkpoint for all the non-Germans. There was no Charlie,” said Georgia. According to the Visit Berlin website, “Checkpoint Charlie was not only an important Cold War site, but also witnessed numerous attempts to escape from East Berlin.” Georgia showed us the open air exhibition across from Checkpoint Charlie which tells the story of those who escaped and those who didn’t. 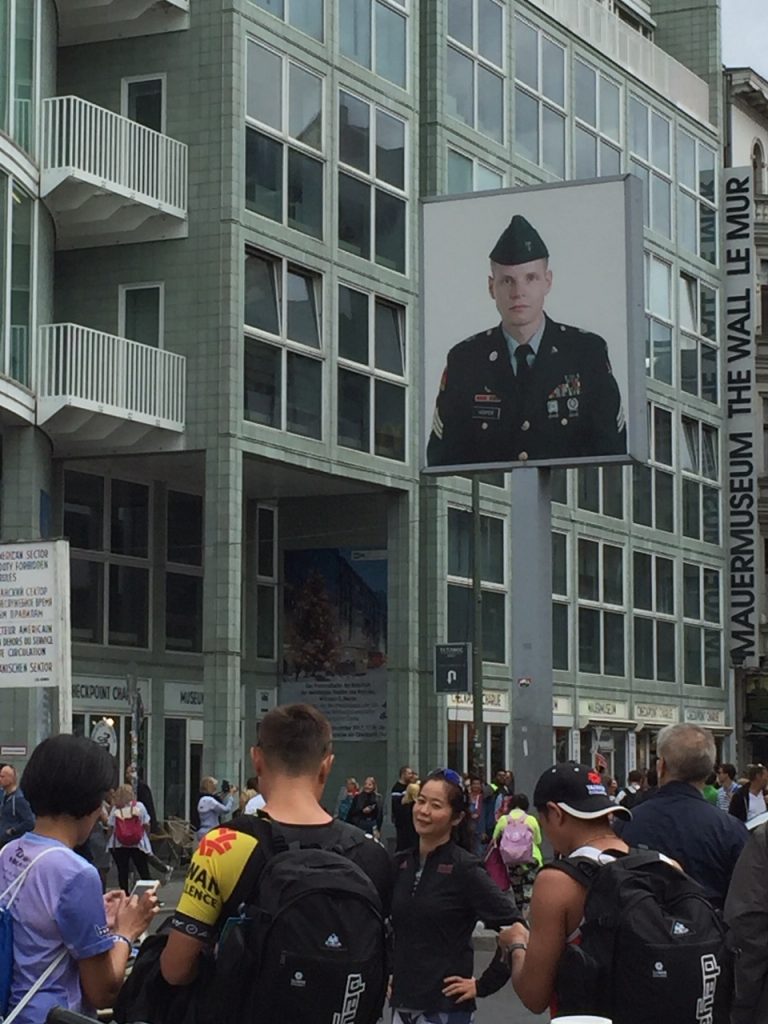 At just under 4-hours, our tour was almost complete. We walked back, ending at Gendarmenmarkt, also known as The Square of the Men of Arms. It is a beautiful plaza where tourists gather all hours of the day. There are two churches here as well as a concert hall. And according to Visit Berlin, this square turns into a Christmas market during the winter months. Note: One of the most visited places of remembrance in Berlin is the Topography of Terror,  a museum located on the site of the SS command. Unfortunately we didn’t have time to visit — next time! 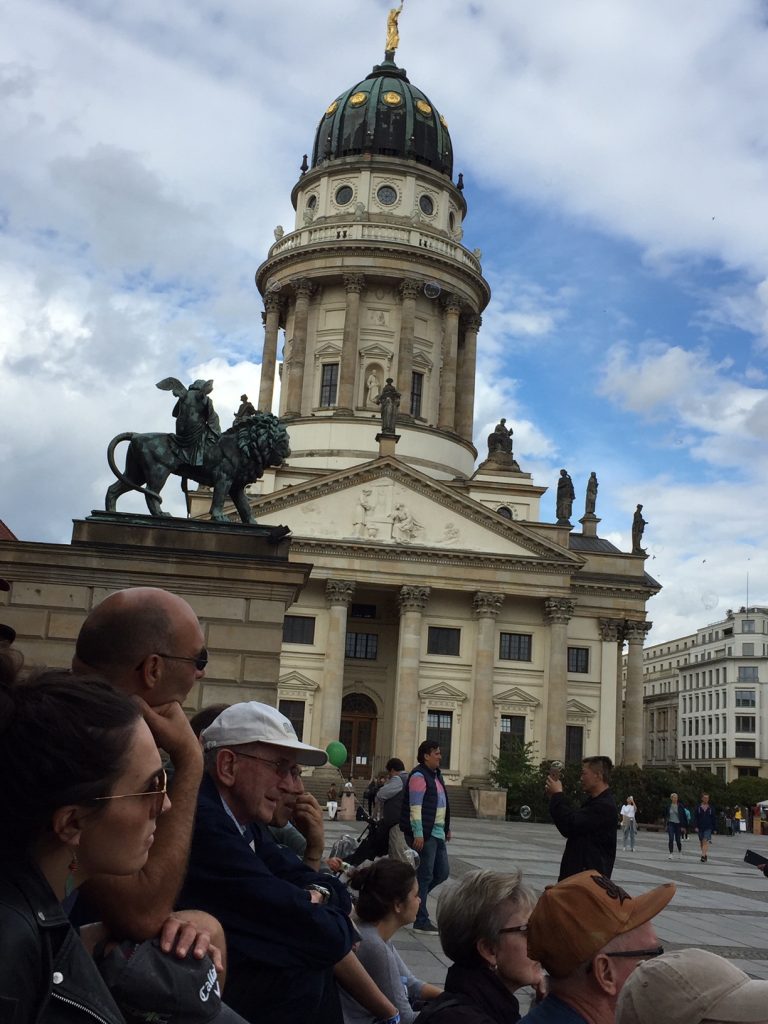 Tourists gather at Gendarmenmarkt during all hours.

Well-versed in Berlin history after our fabulous tour, we still had more steps to take before calling it a day.  First we went to Rausch Chocolaterie to buy some German chocolates to take home. 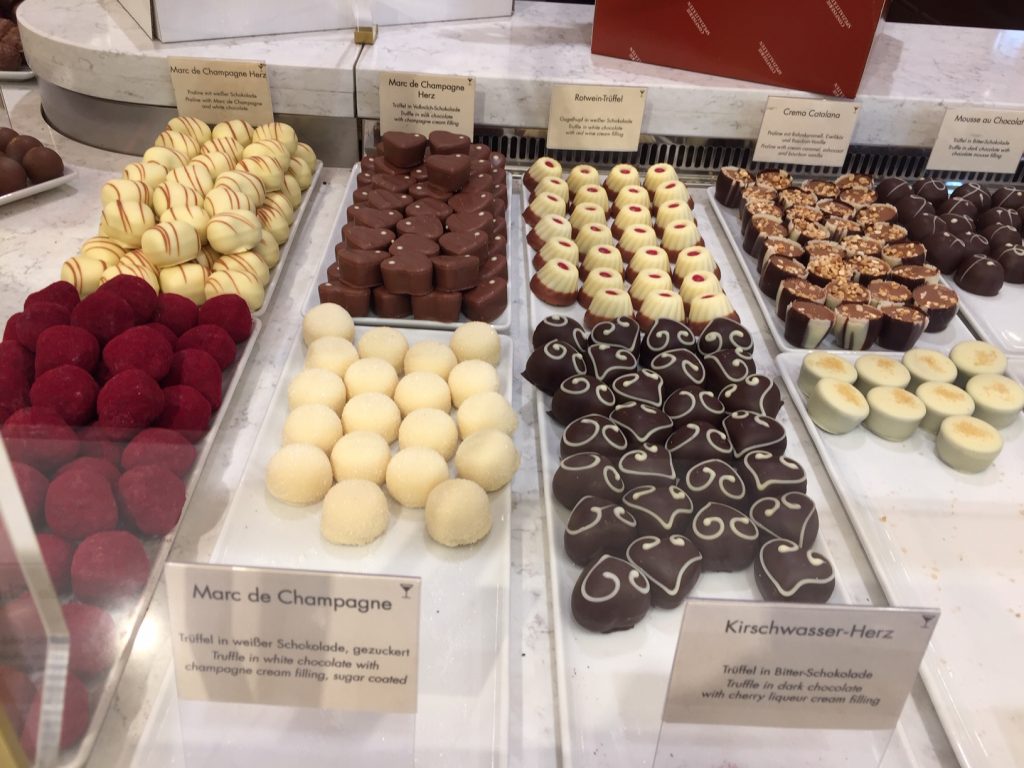 Rausch has the largest chocolate counter in the world.

We also decided to hop on the U-Bahn and take the train to the Jewish Museum. It is a very contemporary museum, with a tribute to the Holocaust in the downstairs exhibits, and a special Jerusalem exhibition on the upper levels. The architecture reminded me of the Memorial we had seen earlier in the day. 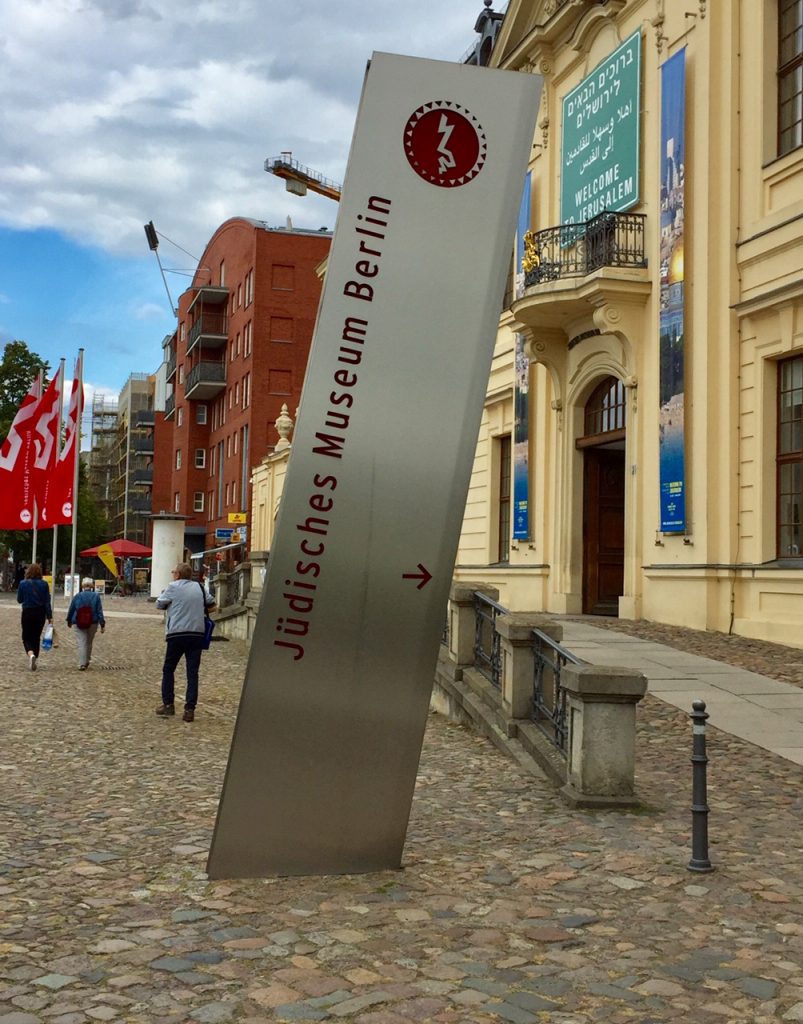 We were lucky the Jewish Museum was open on Saturday.

Setting Sail On The Viking Star

Tomorrow we would be leaving Berlin for a three hour bus ride to the Warnemunde Port to board the Viking Star. Ooh, ooh, ooh, in my upcoming travel posts I’ll tell you all about the Viking Homelands with picturesque ports in Denmark and Norway. 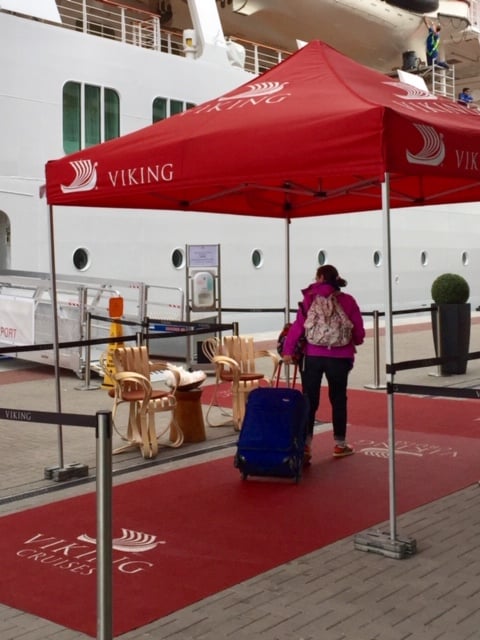 Tomorrow we would board the Viking Star for a trip through the Viking Homelands.

P.S.: In case you missed my first blog posts about my Viking Homelands cruise and Berlin, check them out here:
♥ All Aboard Viking Star: A Great Way To Discover Scandinavia
♥ A First Taste of Berlin’s Culture and Cosmopolitan Cuisine

* Disclosure of Material Connection: This is a “sponsored post.” Viking Cruises provided me with a complimentary press trip on the Viking Homelands Ocean Cruise and a complimentary one night’s stay at the Berlin Sofitel. Regardless, I only recommend products or services I use personally and believe will be good for my readers.