A Rollicking Good Time At The Ringling Circus Museum 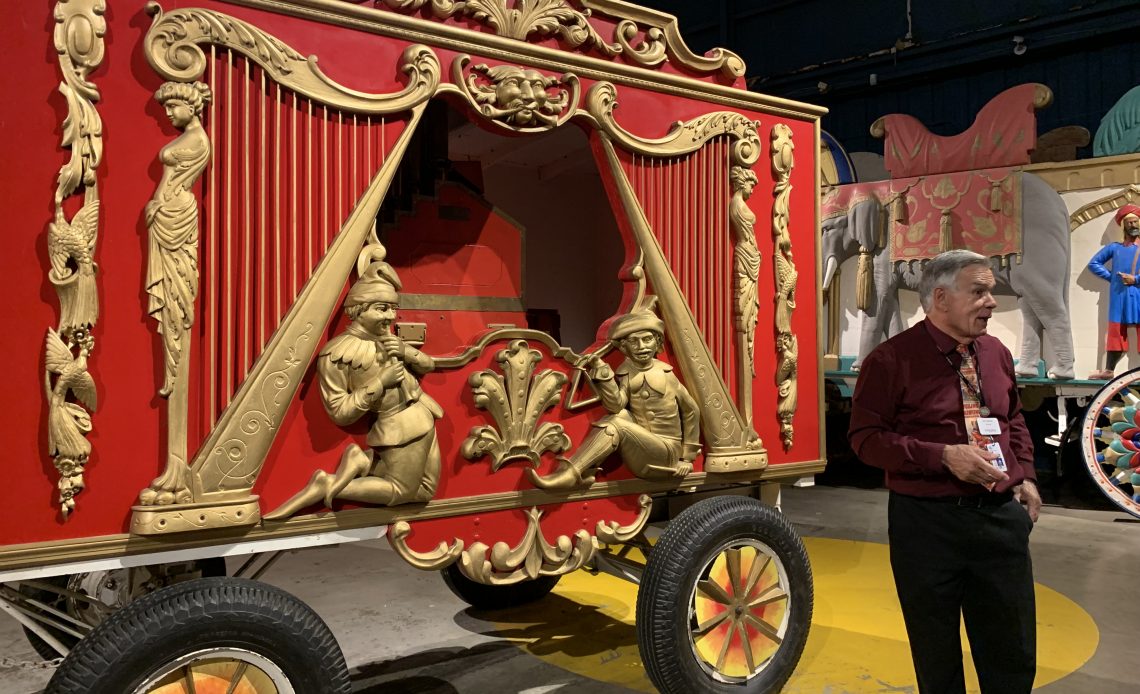 Gorgeous, wondrous, comic, clever, beautiful, superb, extraordinary, awesome, terrific, daring! These are the words you’ll see when you enter The Ringling Circus Museum in Sarasota. While I wasn’t a big fan of the circus when I was a kid, as an adult I found the tour of this museum to be fascinating and enjoyed learning about the history of what was once considered “the greatest show on earth. 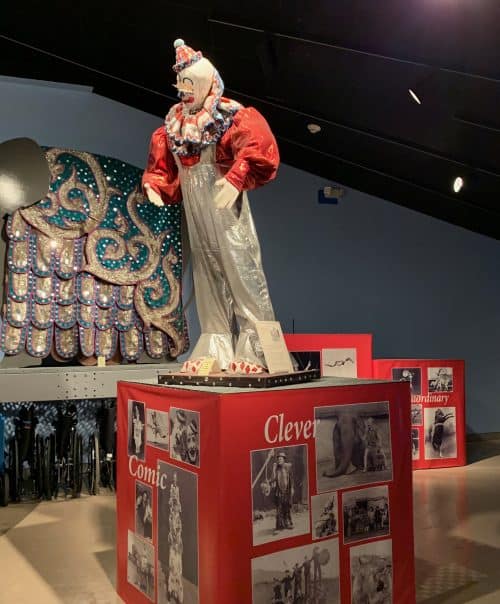 Bold words are used to describe the circus

A foundation of Americana

“Welcome to the original circus museum,” said our guide Ed. “Ringling circus is all thanks to John Ringling. John and Mable moved here in 1911, built an art museum in 1920, and when they died in the 1930s they left everything to Florida.”

“The early days of the circus were absolutely spectacular,” said Ed. “It was a foundation of Americana. When the circus would come to town the posters would be plastered all over. People were excited.” 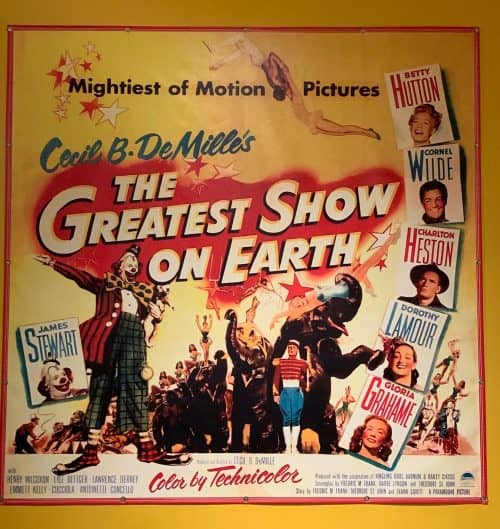 Getting to know the Ringling family

While John Ringling is the most well known of the family, he had six brothers, four of whom said they wanted to start a circus with John after visiting one. In the late 1800s, the wagon circus was mostly adult entertainment. However the Ringling brothers decided they wanted a family show. They started their circus in their hometown of Baraboo, Wisconsin. By the early 1900s, their circus became the biggest show in America and they became circus kings. Ed said that over 1000 people traveled with the circus – wow-o-wow! 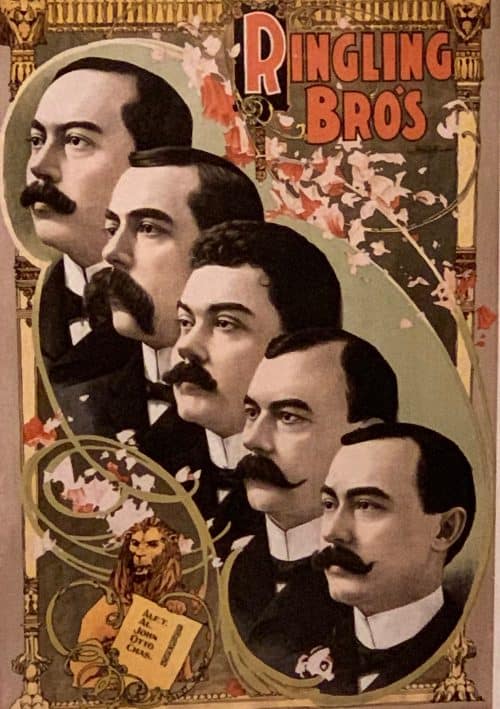 The Ringling Brothers started their circus in Wisconsin

Ed did not talk about Barnum and Bailey but since I’m sharing a brief history I thought I would include a little about the two other noteworthy circus members. Per Wikipedia: “In 1919 the Barnum & Bailey’s Greatest Show on Earth, a circus created by P. T. Barnum and James Anthony Bailey, was merged with the Ringling Bros. World’s Greatest Shows. The Ringling brothers had purchased Barnum & Bailey Ltd. following Bailey’s death in 1906, but ran the circuses separately until they were merged.”

After his brothers died, John Ringling became one of the most wealthy Americans. He ran the circus each year from mid-March to December and moved winter quarters to Sarasota, where he stored everything for the season and invited people to come visit to see the quarters. “That’s why Sarasota is circus country,” said Ed.

When John passed away in 1936 his nephews continued the circus for several decades until they sold the Ringling circus in 1967. Eventually the new owners closed it.

The Big Top in its hay day

The museum showcases the original equipment from the Big Top’s hay day including John Ringling’s private Pullman railcar built in 1905.  “John had a unique talent,” said Ed. “He would get in the railcar a year ahead so he would have everything ready for the following year for the new season.” He and his wife Mable, who he married later in life, would travel the country in the railcar. 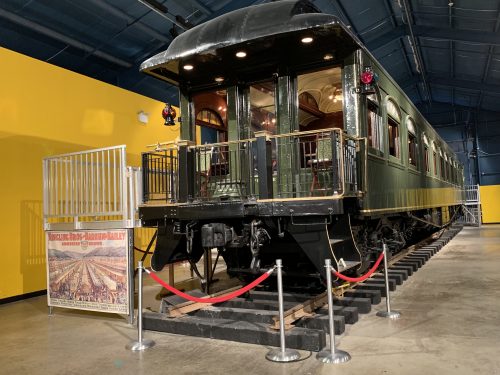 The human canon was equally impressive. It was one  of the greatest acts of the circus. Ed told us that John went to Europe to sign the Copenhagen family of father and sons who were famous for shooting themselves out of a canon.  In 1929 the act became the closer for the show. By the 1940s, their 16 year old daughter joined the act. Eventually two females were shot out of the canon. 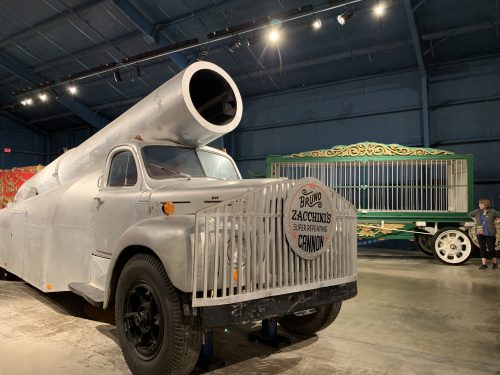 People were shot out of canons

The circus comes to town

It was magical to hear about how the circus came to town by wagon. “There was a parade,” Ed said. “Kids would go to bed and in the middle of the night the circus would be in town. By daybreak everything was set up and ready for the shows.” At 11:30 a.m. was the circus wagon and parade down the town’s main street. Then the animals were moved into the circus tent. Can you imagine such coordination?

Hundreds of horses traveled with the circus pulling the wagons. It’s amazing to think that in three to four hours everything was unloaded. The tigers and bears were in the big wagons. To make extra money there were the side shows with real people with oddities like the bearded lady and three legged man. 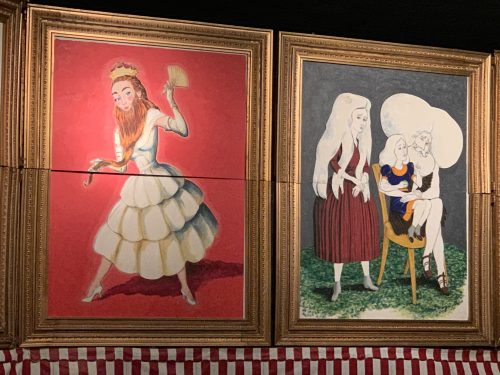 Circus oddities were part of the side show 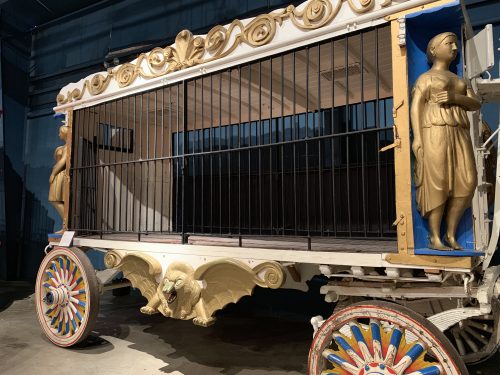 Jump on the bandwagon

The circus had its own sounds too. “The calliope whistle could be heard for miles, it was so loud,” Ed said. “The bandwagon was the last wagon and played circus music. “Have you heard the term ‘jump on the bandwagon’?” Ed asked. “It likely came from the circus so kids would follow the music.” 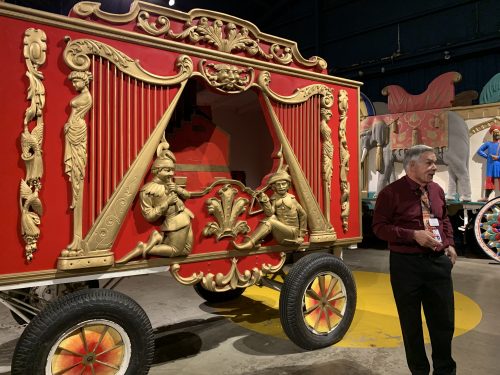 Our tour guide told us about the musical bandwagon

More to see at The Ringling

There’s much more to see during a visit to The Ringling and it’s well worth the price of admission. The campus includes a renowned art museum, a magnificent rose garden, and a learning center that houses a 3,800 square foot, 44,000-piece Howard Bros. Circus Model and interactive gallery. Plus, it’s situated on gorgeous grounds that overlook the bay with bayfront gardens. There is a restaurant, shop to buy circus souvenirs and food stands around the grounds. 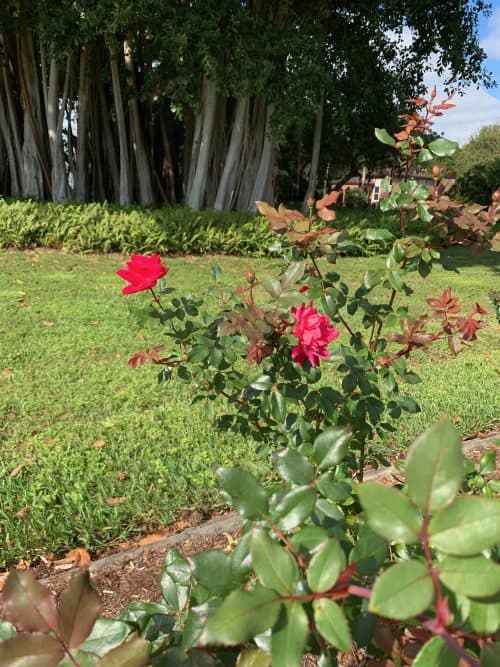 It’s time to say goodbye from The Ringling. Think I’ll conclude just like they did at the end of each circus performance. As they used to say back in its hay day — “may all your days be circus days!”

P.S. In case you missed my two previous posts about Sarasota, you can find them here:

♥ Foodies Will Enjoy These 7 Great Places to Dine in Sarasota