A Lovely Day of Sightseeing In London 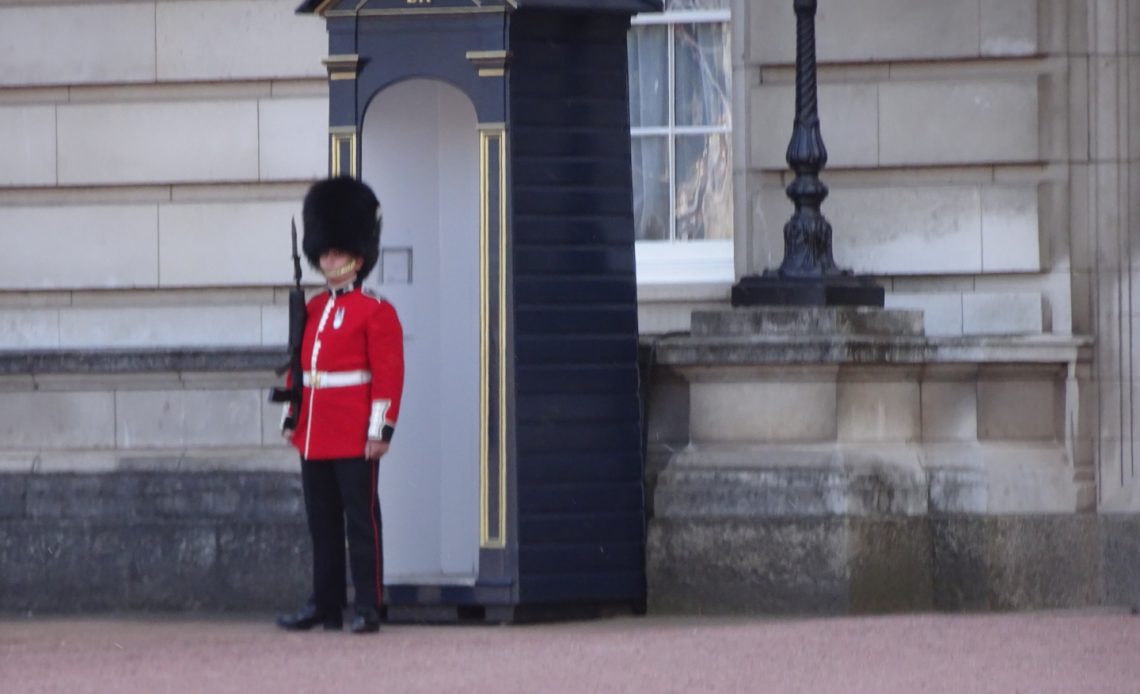 It was time for our June girls’ trip to Europe. I was traveling with my sister N, my daughter A, and her friend M (who is lucky to live in Paris). Our first stop was a two day stay in London followed by the main event — a week in Sicily. Ooh, ooh, ooh, I can’t wait to share all the details about our lovely day one of sightseeing in London. Not to worry, I’ll get to our Italian adventure in future posts.

It’s amazing how many sites we saw and how much great food we consumed during our first 10 hours in Britain’s capital city. Counting 25,000 steps on day one, we managed to meander around quite a few neighborhoods, parks and historic establishments. Did I mention I’m loyal to the Royals, I love British history and accents, and adore McVitties digestive biscuits? Can you see why I wanted to make a stop in London on our way to Sicily? 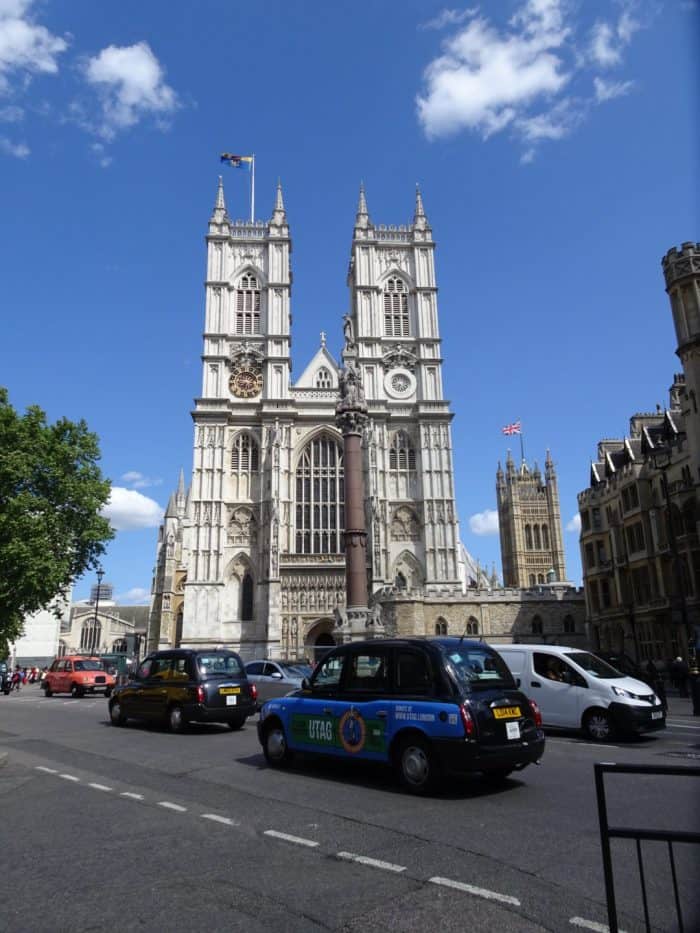 From Heathrow to Bayswater

The three of us from the States met at Heathrow upon arrival and grabbed a taxi to the Caesar Hotel in Bayswater. (Note: M joined us on day two.) Located in a residential area near Notting Hill with four subway stations within a 10 minute walk, the Caesar is ranked as a top spot in London on booking.com. It was one of the few hotels I found that had two twin beds in each room.

Despite our mutual lack of sleep, we dropped off our bags and were off and running under partly cloudy skies for a full day of sightseeing. 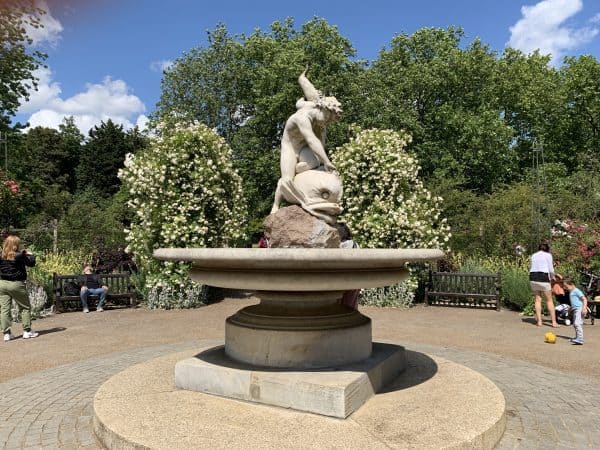 Our hotel was within walking distance of Hyde Park

Our first foodie affair at Ottolenghi

With morning traffic getting into town from the airport, it was almost noon by the time we reached city limits. “Let’s walk over to Ottolenghi Market in Notting Hill and have lunch,” said A. She didn’t have to twist my arm, I’m a big foodie fan of chef Yotem Ottolenghi and his Jerusalem and Plenty cookbooks.  I was looking forward to eating at his market. 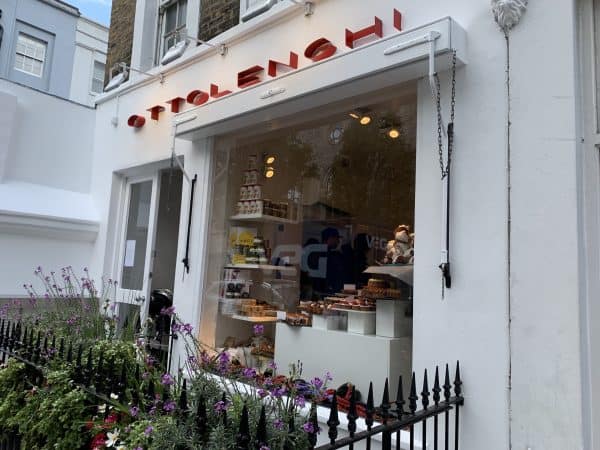 The shop is mostly for takeout but there is a large communal table if you want to dine in. The food was just as Ottolenghi describes: “It’s full of harmonious contradictions: it’s vibrant and bold yet familiar and comforting; it’s beautiful to look at yet close to its original form; it’s full of surprising drama yet always comes together as one; it’s noisy yet peaceful, lip-smacking yet warm, simple yet daring.” 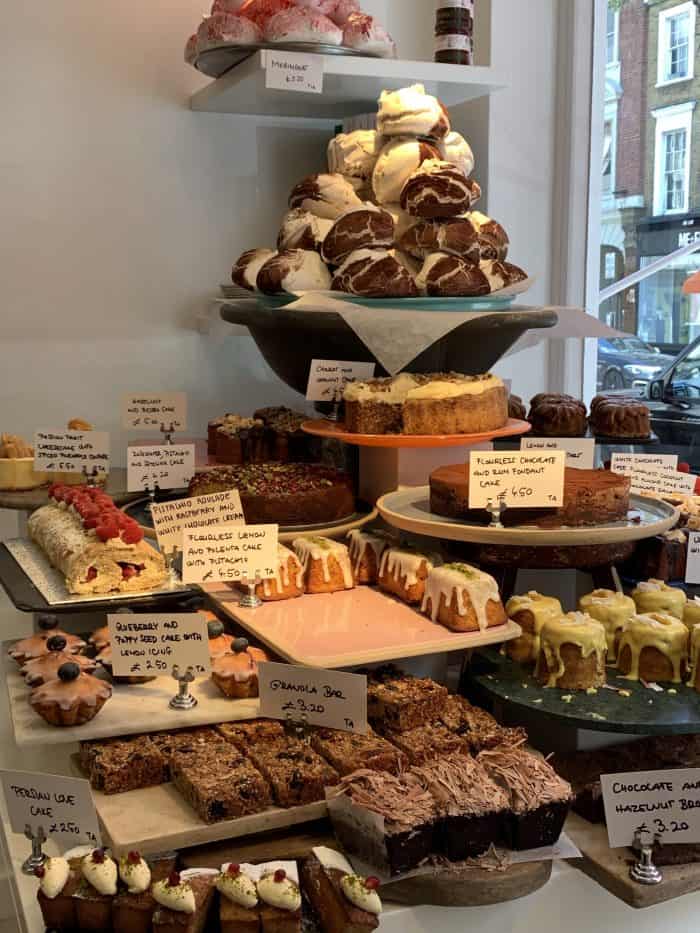 The desserts at Ottolenghi are scrumptious

My sea bass with aubergine and cauliflower tabouli was so good

Navigating the tourist attractions in London

Tummies full, we were ready to tackle London’s tourist attractions. We opened our city map and began to navigate. Our steps led us through the greenery of Hyde Park to the changing of the guards at Buckingham Palace. From there we strolled through St. James Park viewing the beautiful flowers (sneezing as the pollen accumulated on our clothes) until we reached Westminster Abbey. 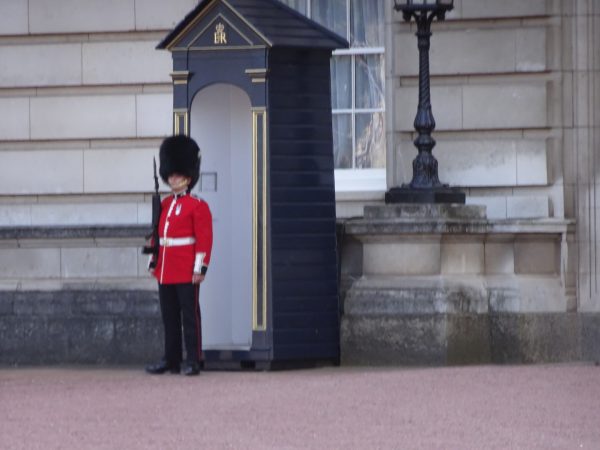 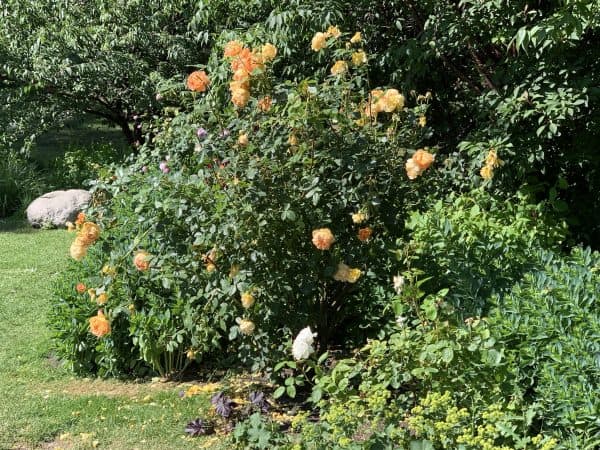 Down from the Abbey is the towering 135 m Coca Cola London Eye, known as “the world’s largest cantilevered observation wheel,” providing a perspective of London like no other. Millions of tourists board this structure every year. It’s a magnificent feat of engineering. If you are visiting and want to buy tickets I suggest you purchase them in advance online. 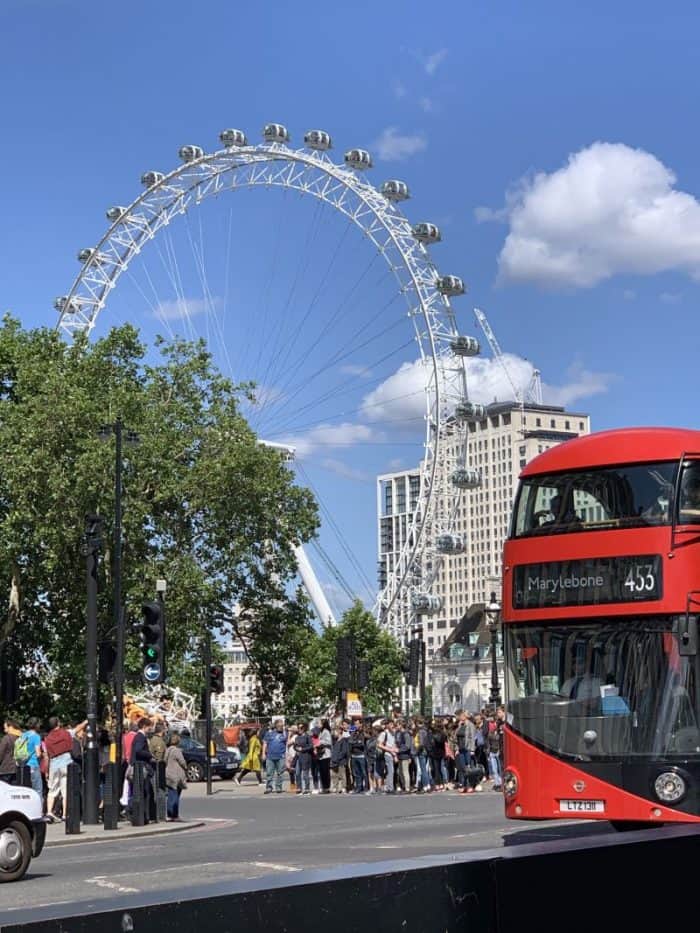 For a late afternoon pick-me-up, we entered Harrod’s, the famous London department store. According to its website, “Harrods has been at the pinnacle of luxury retail for over 160 years and a pioneer in food retail since 1834.” We did some window shopping on the designer levels, took a potty break, and then escalated down to the Food Halls on the lower level. 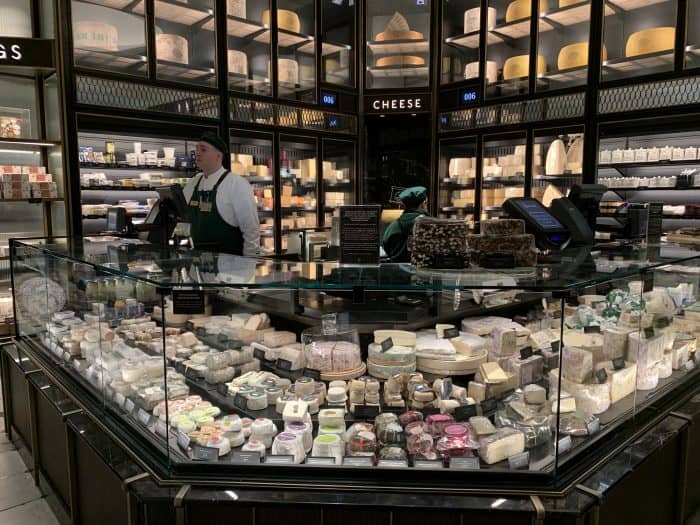 OMG, entering the Food Halls is like walking into a foodie coma. From the Butcher to the Fishmonger, the Bakery to the Fruit & Vegetable Butchery, the Charcuterie to the Cheese Shop, the Roastery to the Patisserie, it was a total sensory experience. My favorite was the Chocolate and Confectionery Hall and the Florist. I bought some Harrod’s coffee from the Roastery as a souvenir for my boyfriend L. 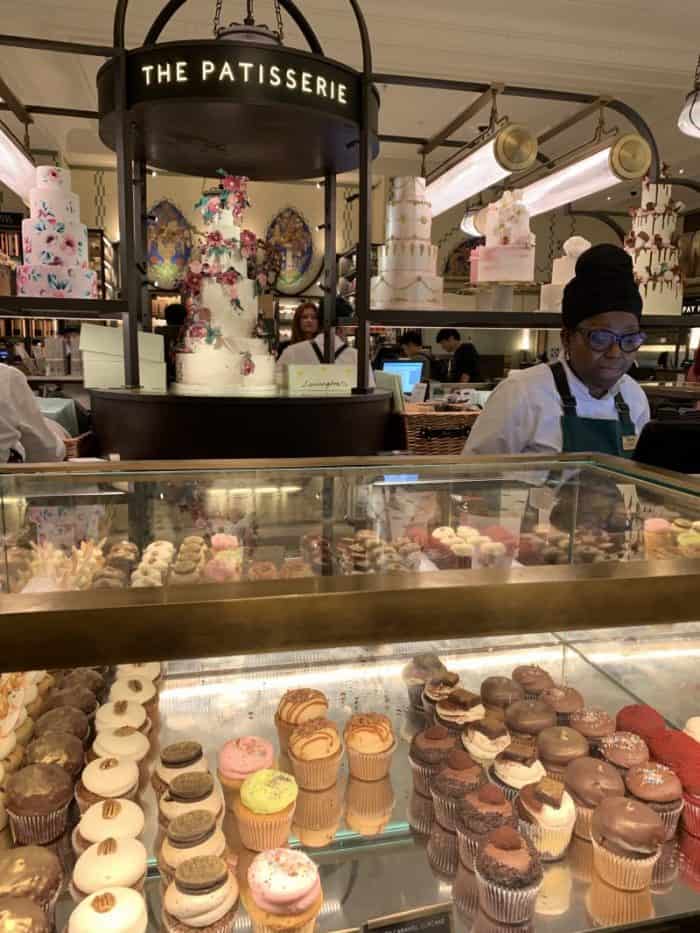 The pastries in the Patisserie are irresistible

By the time we left Harrod’s it was approaching 6:30 pm. We could barely feel our feet and wondered if they would indeed lead us back  to the Caesar. Perhaps we should hop in a taxi or take the tube? 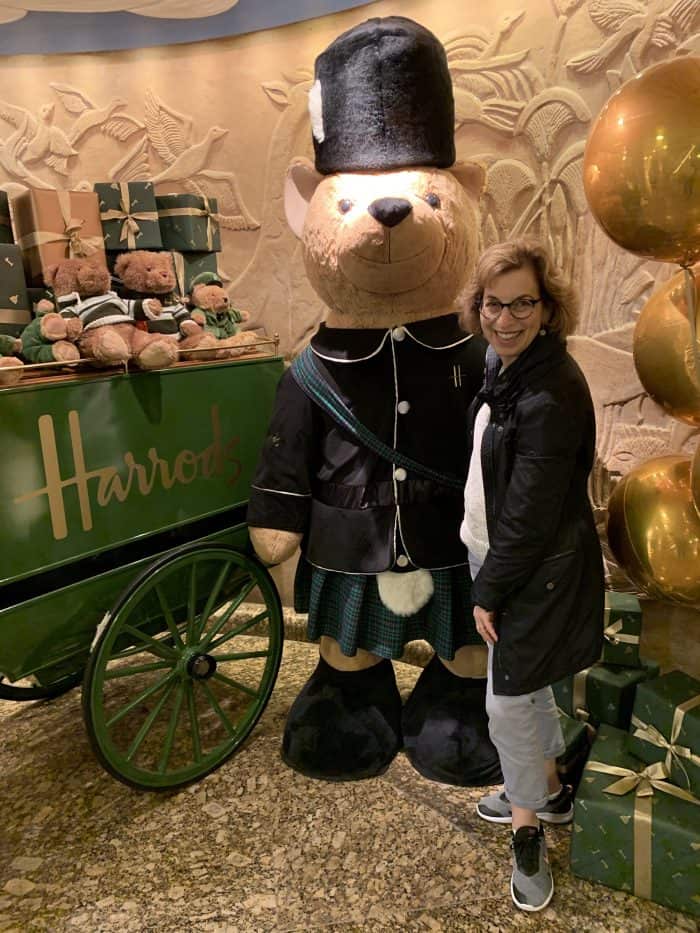 Dashing off to Dishroom

My son D had recommended Dishroom for dinner. “I had the best-ever Indian food at Dishroom,” texted D. “There are several Dishroom restaurants around London.” “Let’s go to Dishroom in Kensington near our hotel,” said A.  We were able to get a reservation for 8:00 pm. With 90 minutes to spare, why take a taxi or the tube?  “We can walk it,” said A. 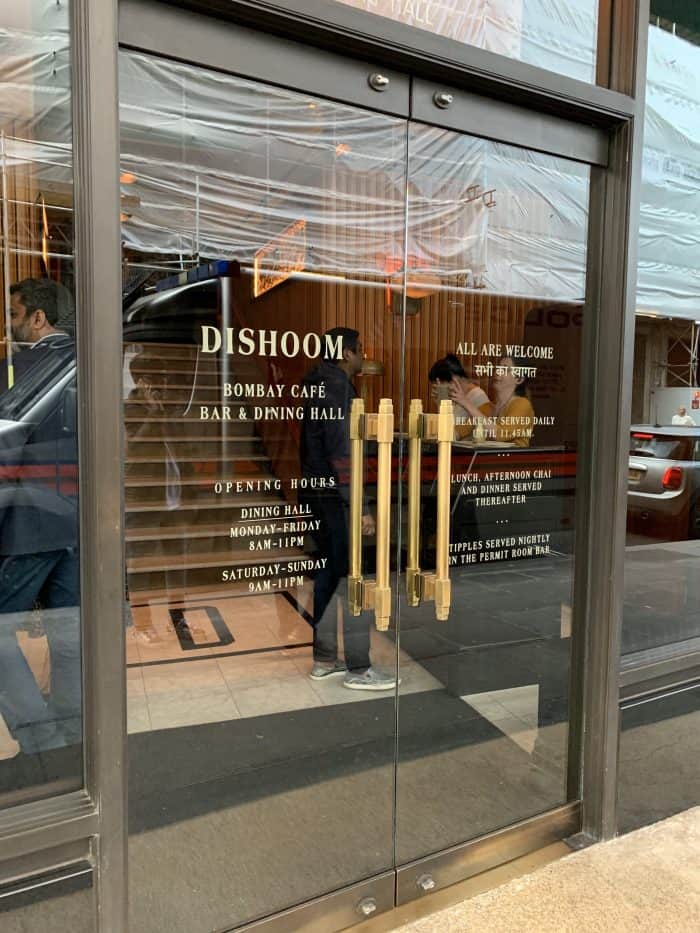 Dishroom is a Bombay cafe

N and I mustered up our energy. Step by step we crossed back through two parks over hills and grass arriving at Dishroom with a little wait. The restaurant was bustling.

Dishroom says it “pays homage to the Irani cafes and the food of all Bombay. Dishroom says that “Old Irani cafes offered faded elegance which welcomed all: courting couples, sweaty taxi-wallas, students, artists and lawyers. These cafes broke down barriers by bringing people together over food and drink.” We dined on shrimp masala, chicken biryani and soaked it up with tasty naan. It was so good, so good, so good. 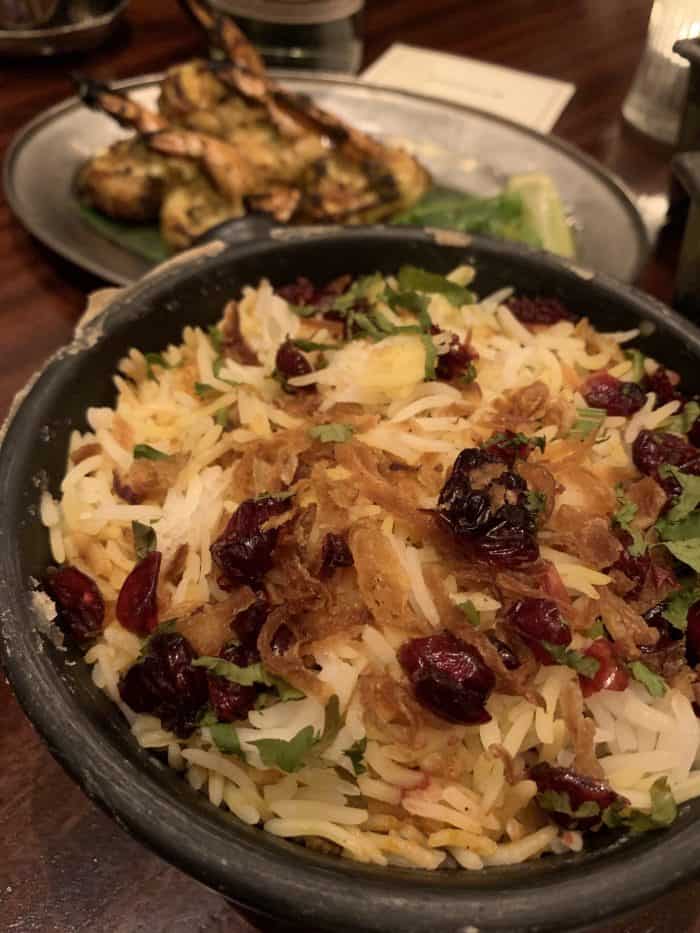 With a few steps left in our stride we made it back to the Caesar and into our beds. Tomorrow would bring day two in London, including tickets to the Dior exhibit at the Victoria and Albert Museum, a visit to Covent Garden, and more fashion and foodie fun — I couldn’t think of a better girl’s trip agenda. 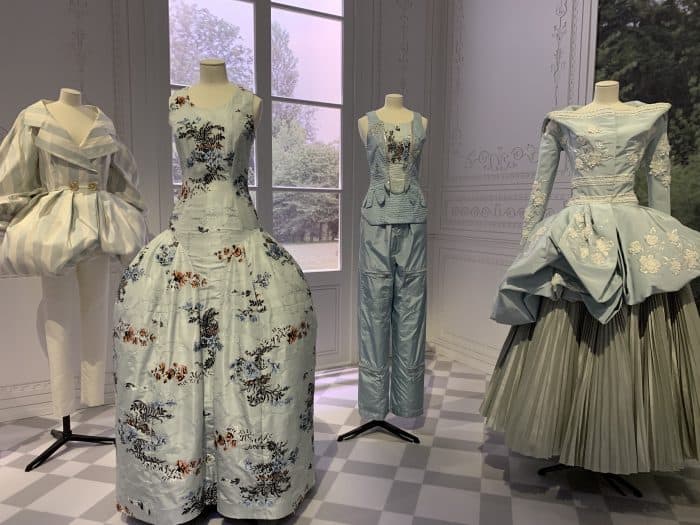