A Fabulous Day of Fashion at the MET Costume Exhibit 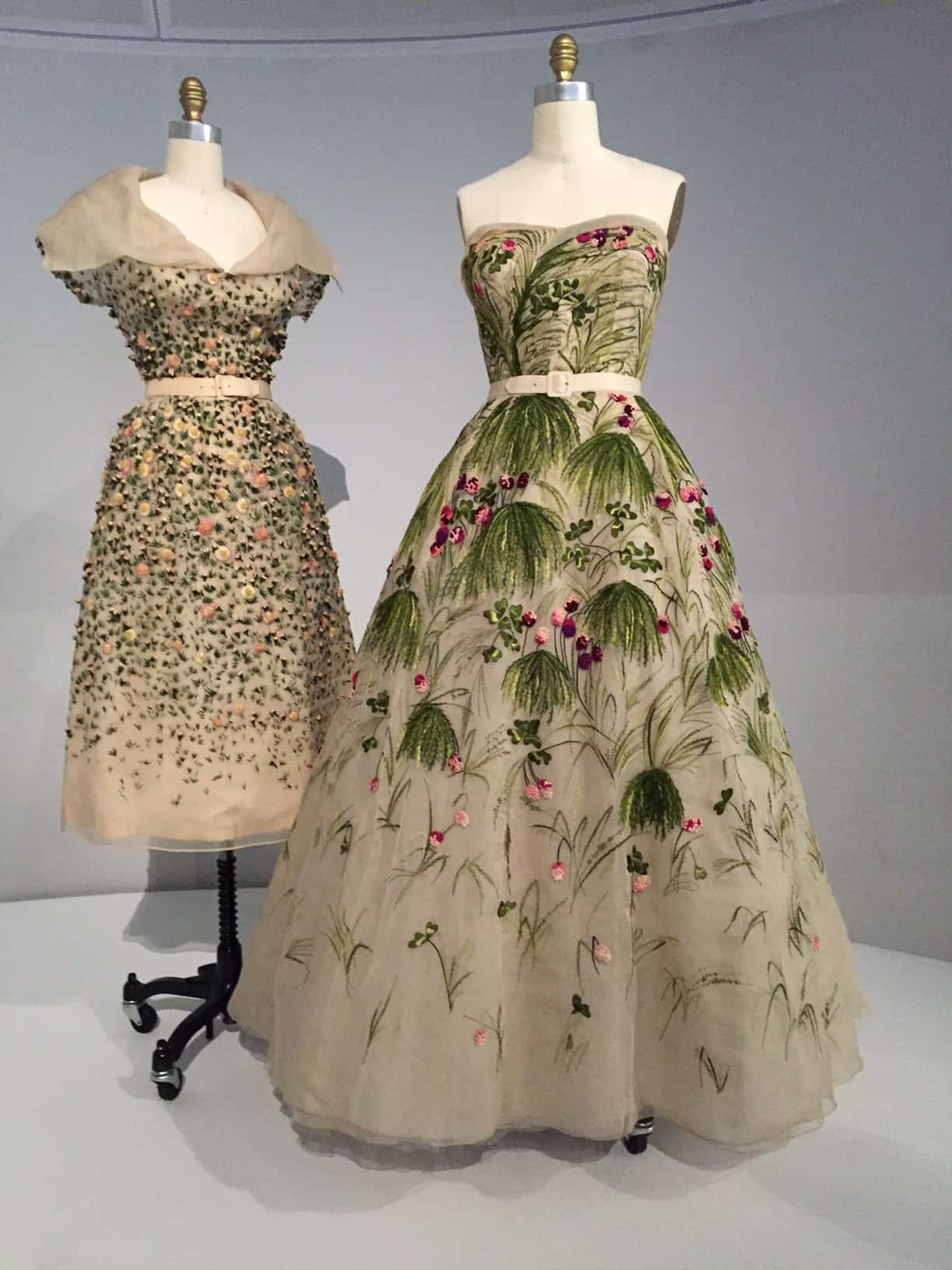 A few weeks ago I wrote a review of the new documentary, The First Monday in May, which is all about The Metropolitan Museum of Art (MET) Costume Institute’s 2015 exhibit “China: Through The Looking Glass,” and the star-studded fundraiser that celebrates the opening. After seeing the film I told myself that I was not going to miss this year’s Costume Institute exhibit.

I’m excited to tell you that my BFFs N and J and I went to see “Manus x Machina: Fashion in an Age of Technology” at the MET in New York City last week. Simply put, IT WAS FABULOUS and YOU HAVE TO SEE IT! It’s definitely worth adding to your summer 2016 “to do” list, especially if you love fashion.

Manus x Machina: Fashion in an Age of Technology
We spent almost two hours walking the exhibit halls “oohing” at all the dresses and gowns, one prettier than the next. The exhibition explores the dichotomy between the hand (manus) and the machine (machina) as it relates to haute couture (custom made clothes) versus designer prêt-à-porter (garments that are produced in multiples for the mass market). It is structured around mêtiers, or trades of dressmaking found in the Encyclopédie of the French Enlightenment (1751-72). The techniques include embroidery, leatherwork, artificial flowers, pleating, lacework, leather, even paper — some hand-sewn and others machine stitched — in certain instances it’s hard to tell which is which. 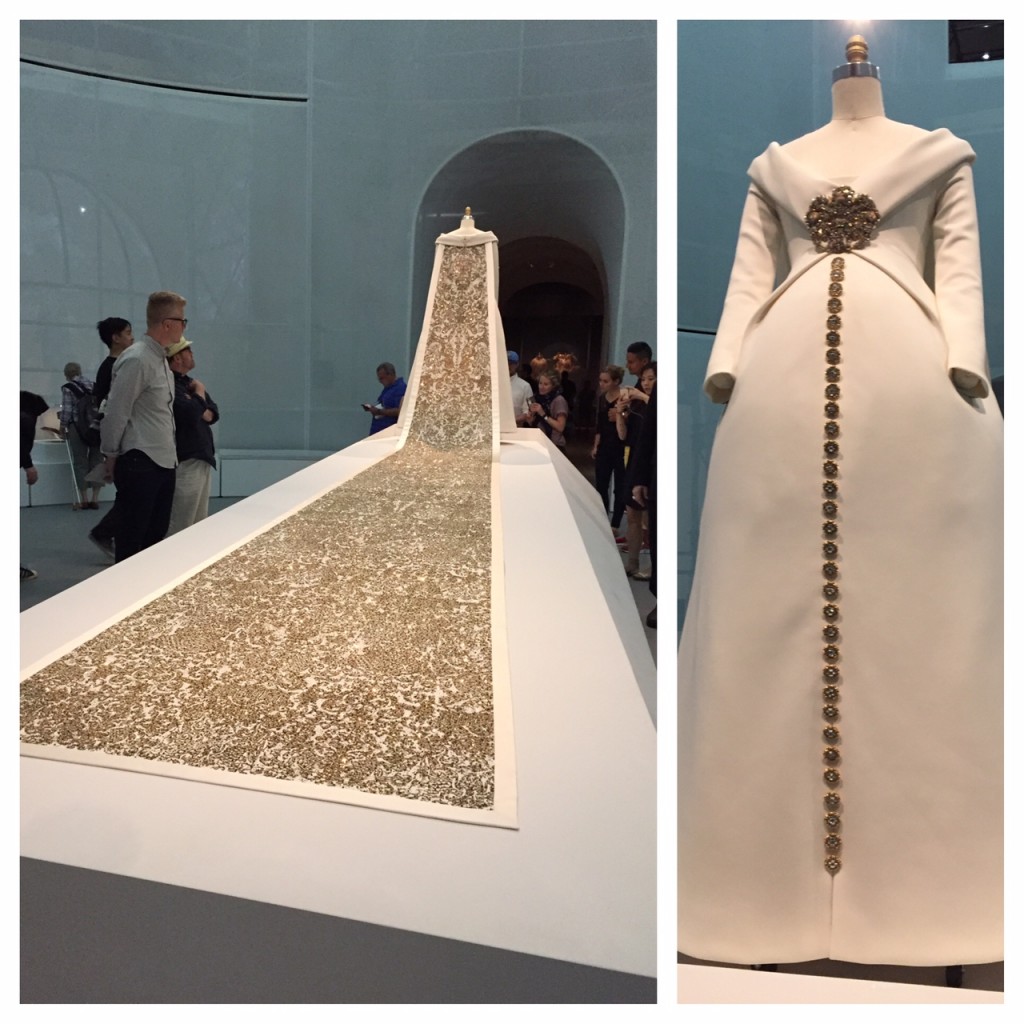 Costume Institute Curator Andrew Bolton did an amazing job displaying the fashions, including the dramatic rotunda entrance with a Chanel Wedding Ensemble featuring a magnificent long train magnified like a kaleidoscope on the ceiling. The main room is followed up with showcases on each mêtier including embroidery, leatherwork, artificial flowers, pleating, lacework, leather, and even paper. Some of the fashions have hand-sewn details and others machine stitching — in certain instances it’s hard to tell which is which.

House of Dior Is My Favorite
There were so many beautiful dresses. My favorites were mostly from House of Dior — some designed by Christian Dior and other more contemporary styles by their Belgian born designer Raf Simons. Since pictures tell a thousand words, take a look below. I think you’ll see why I chose dresses from this collection. 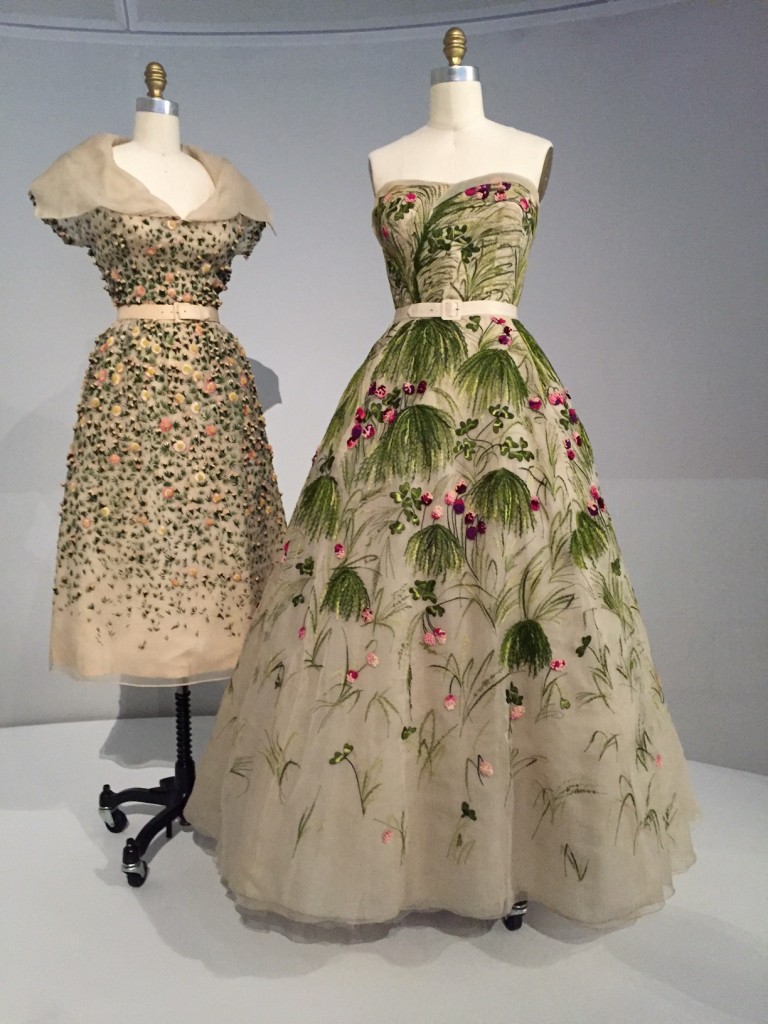 My favorite dresses from Dior. Designed in the 1950s. 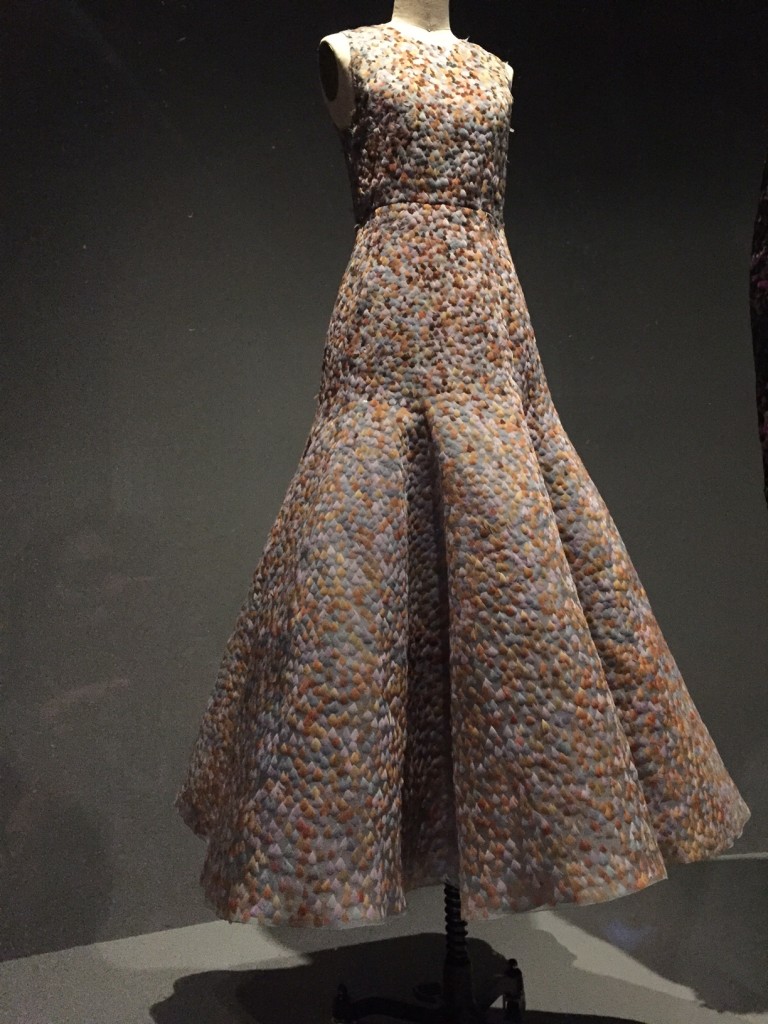 A Dior dress with tiny feathers designed by Raf Simons for the 2015-2016 collection. 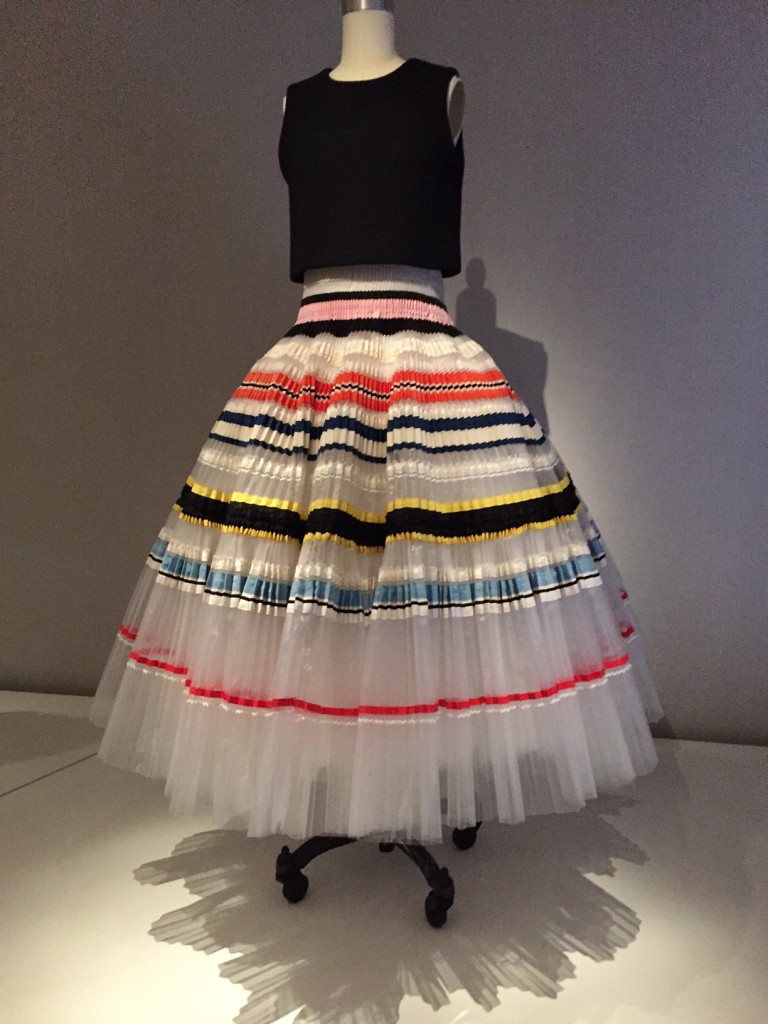 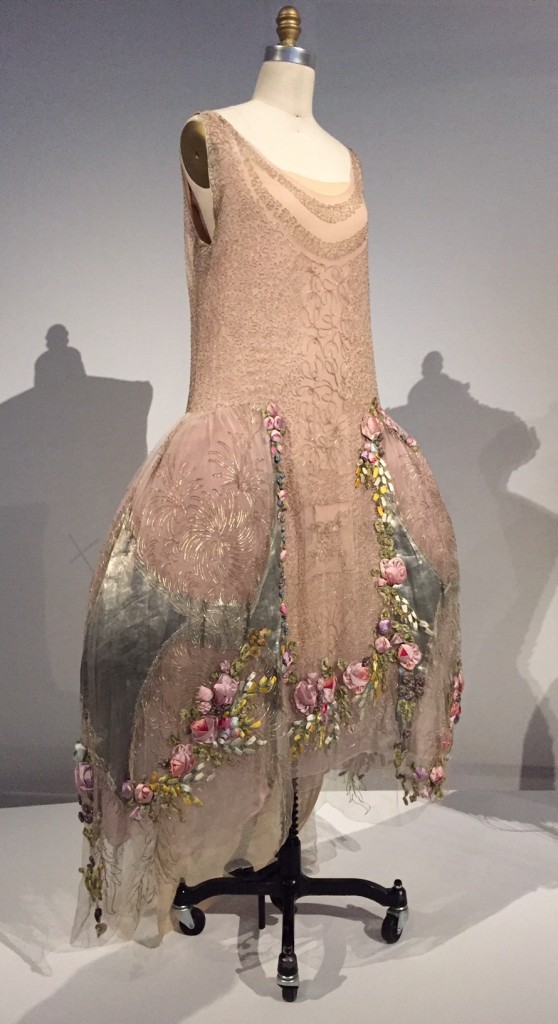 Court Ensemble by Boue Soeurs from the 1920s. 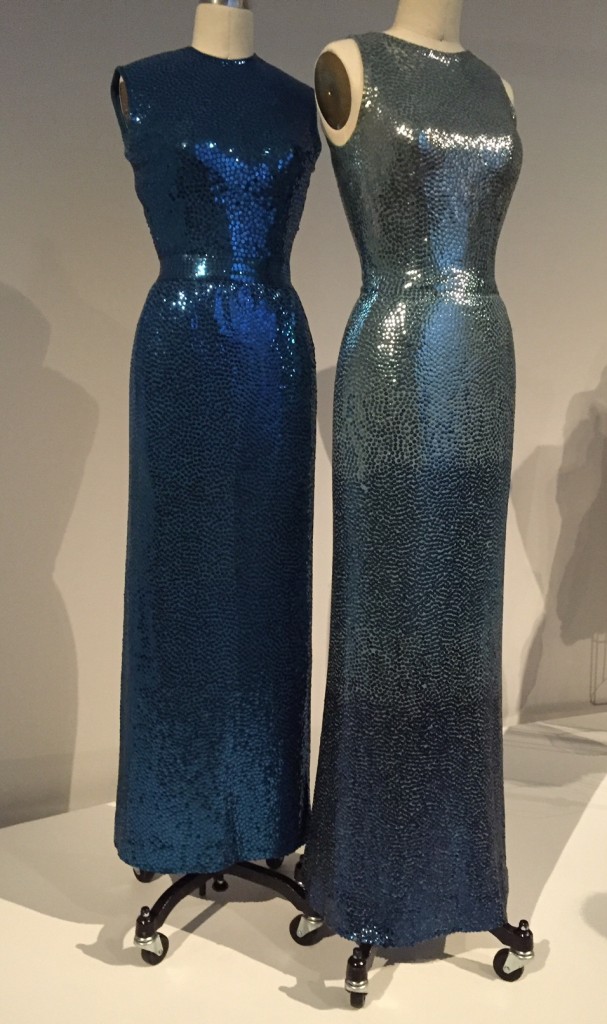 Sequin evening gowns from Norman Norell. The one on the left is from 1965 and the other one is from 1953. I would wear either today. 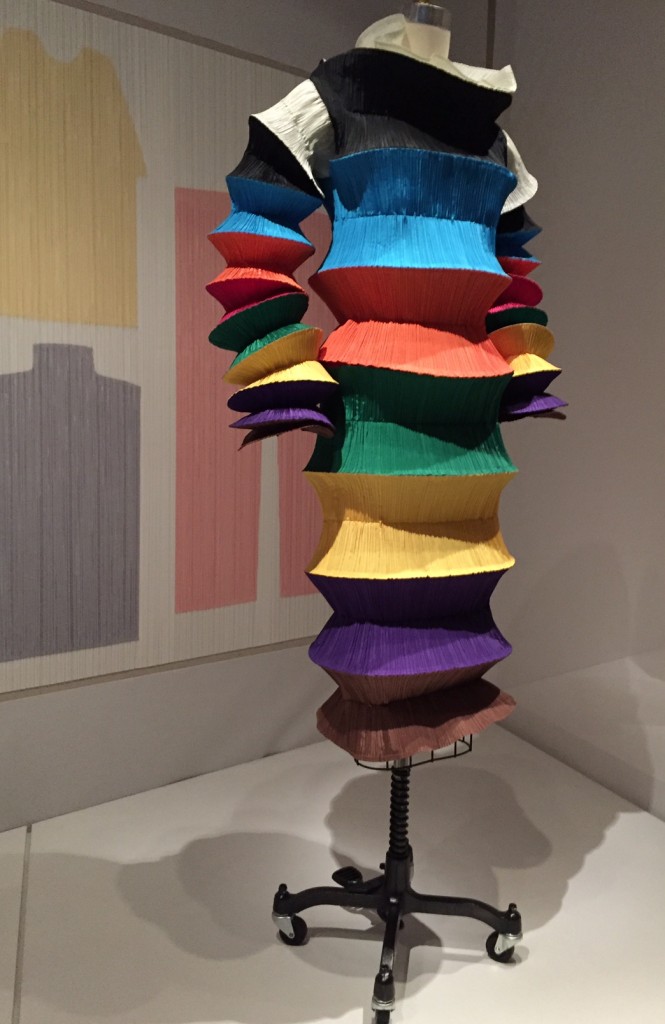 What do you think? Are you enticed enough to want to go see the entire show?

If so, I encourage you to start planning your trip. “Manus x Machina: Fashion in an Age of Technology” runs through August 14, 2016. If you have time for lunch, I suggest you walk over to Madison Avenue and stroll uptown in the 80s and 90s for some delightful places to dine. We had lunch at Le Paris Bistrot on 93rd and Madison. Spend the rest of the day strolling down the avenue window shopping at all the boutiques. Be sure to stop at La Maison du Chocolat for a cup of dark chocolate sorbet.