A Beautiful Rainbow Welcome To The Village of Eidfjord 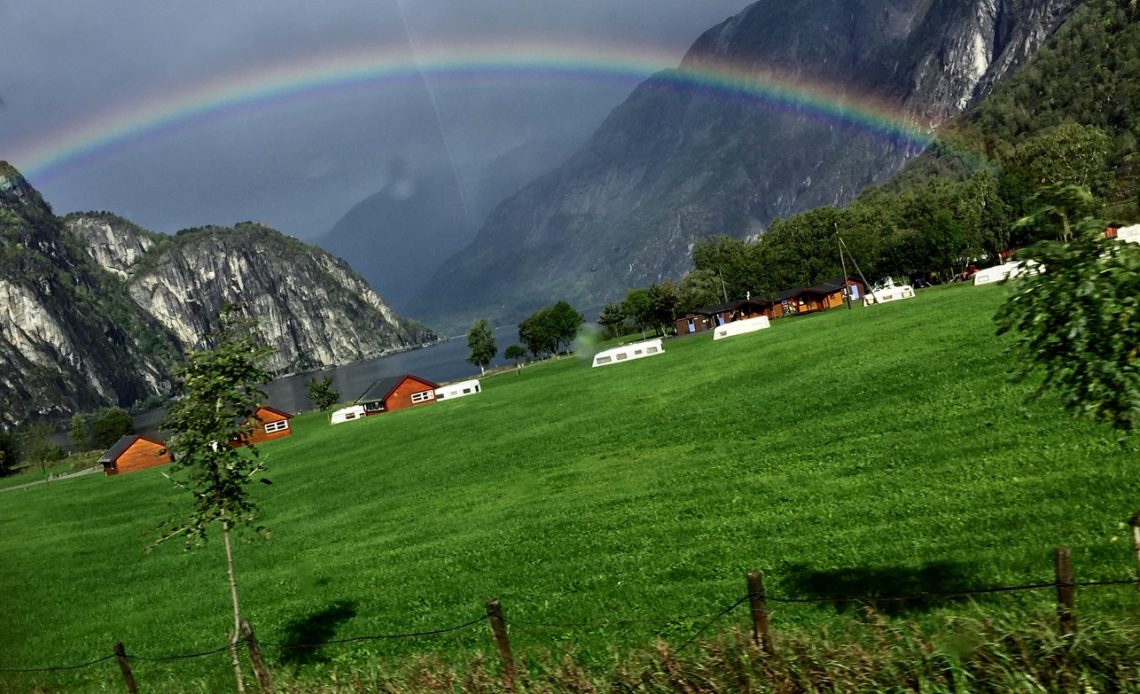 It was raining the morning we sailed into the village of Eidfjord, Norway. As the sun peered out from the clouds, a beautiful rainbow welcomed us. This was our next to last stop on our Viking Homelands cruise courtesy of Viking Ocean Cruises.*

Our plans for the day would include a panoramic tour of one of Norway’s most scenic regions and a drive up the valley to the Hardangervidda Nature Center. 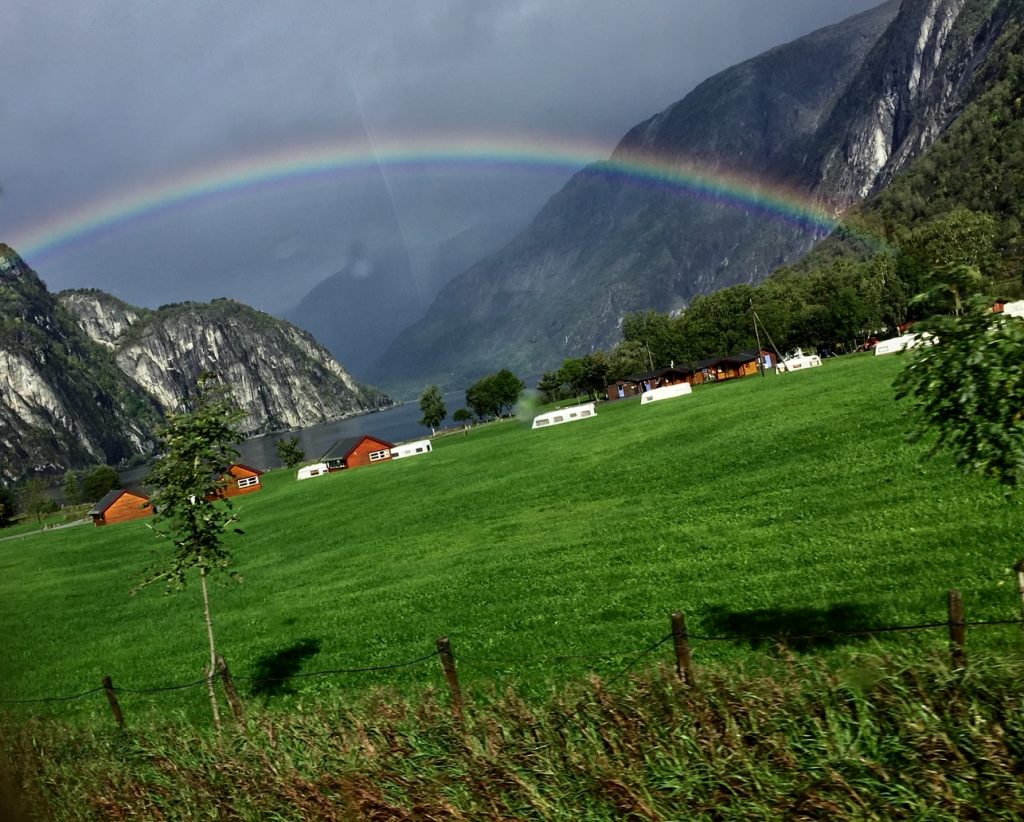 Rainbows welcomed us to Eidfjord, Norway.

A pristine slice of Norway

It only took about 10 minutes to reach the Nature Center from the port. The drive was captivating with mountains, rivers and streams, and wildlife all around us. “There’s another rainbow,” I said to my sister N, who was my traveling companion for this voyage. During our ride, we would learn that Hardangervidda is Europe’s largest mountain plateau. 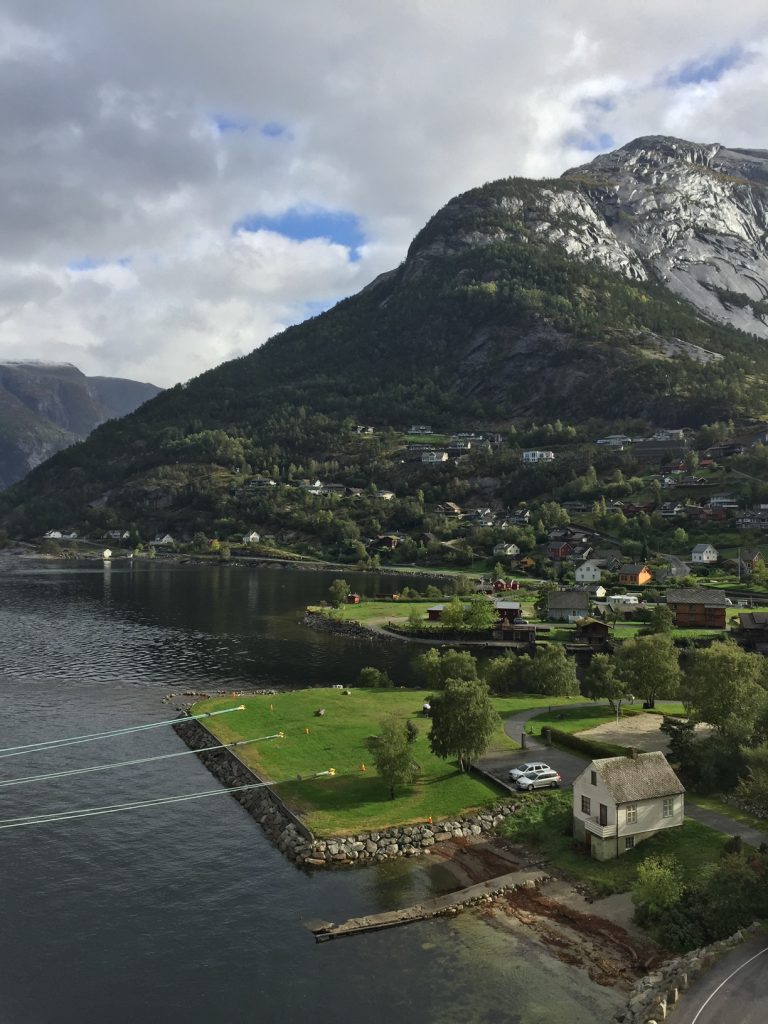 Admiring the wonder of nature at Hardangervidda

We were introduced to the geographic region with a super video. It filled five screens. I literally felt like I was inside the helicopter diving above canyons and into gorges, gliding over mountain lakes and glaciers, and communing with reindeer. “Nature is most admired when it is understood,” said the narrator.

Wanting to know more about Hardangervidda’s history, we had about an hour to explore the three floors of exhibits. The Center is filled with interactive educational experiences about the earth’s geology, including the story of when Hardangervidda was at sea level, around 500 million years ago, when Norway was south of the Equator. Even for a non-geology student like me, it was interesting to learn how scientists find clues about the earth’s conditions by studying layers of rocks. 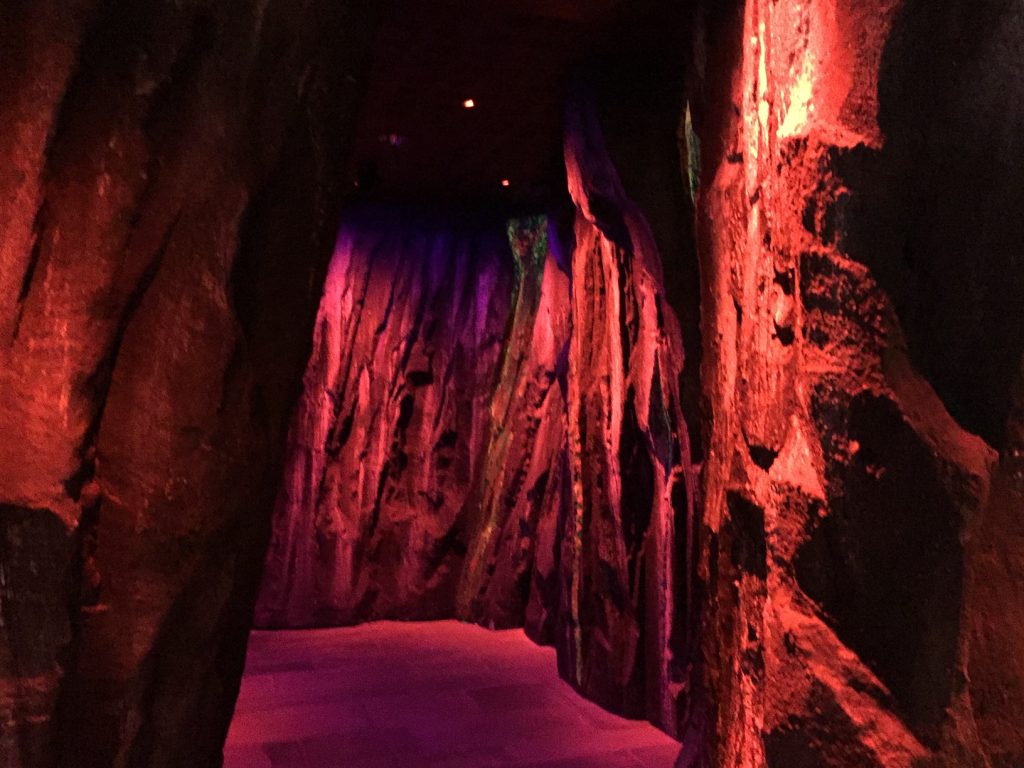 We learned about rock and granite formations and how glaciers developed.

At one point in its history, 20,000 years ago, Norway was covered by glaciers. Can you imagine the ice age? Here’s some trivia for you — “There have been 40 to 50 ice ages during the last 2.6 million years. Several times, huge ice sheets covered Norway and the surrounding seas.” 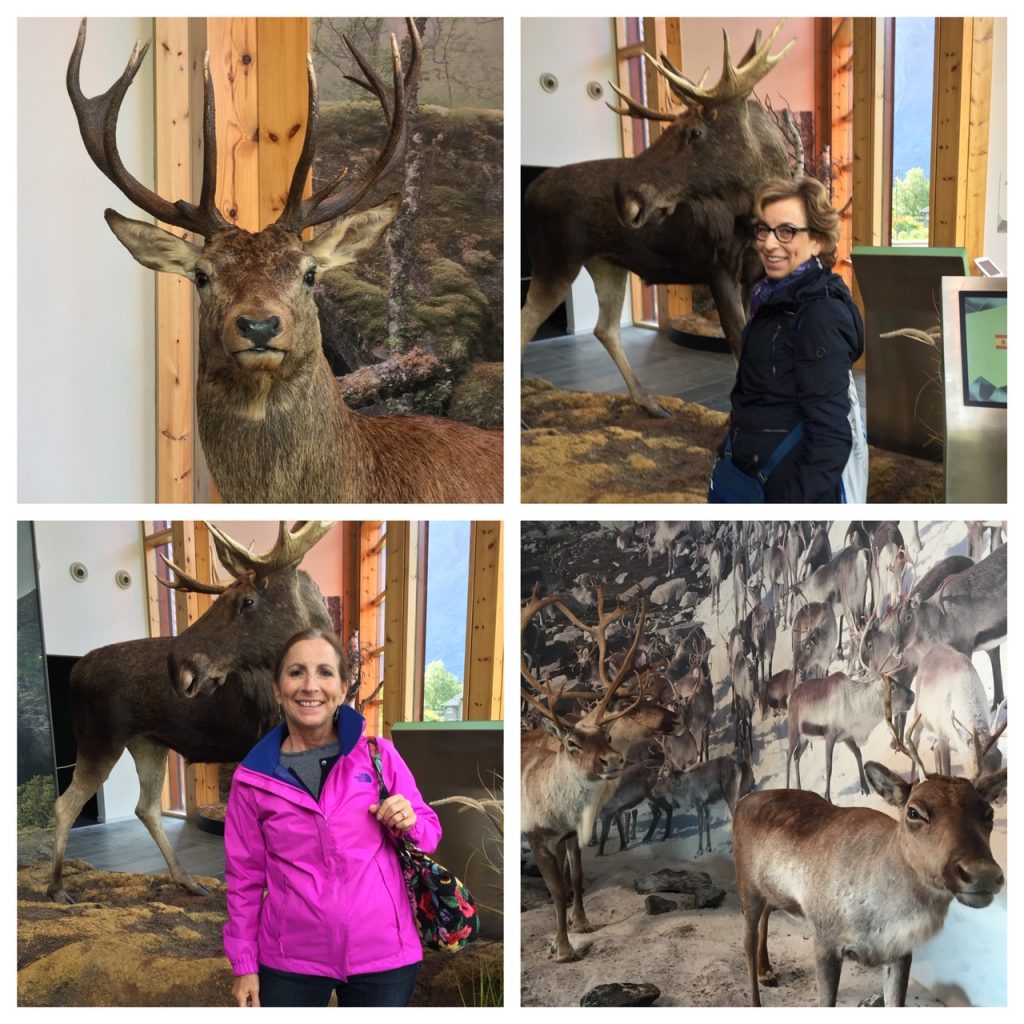 Don’t they look real? My sister N and I saw plenty of stuffed reindeer and moose.

Want more trivia? “Once reindeer roamed freely across Norway’s mountains and high plateau. Now only a few mountains in southern Norway have herds of wild reindeer and their ability to roam is hampered by roads, dams and humans.”

One of the best things I bought on my trip was a lightweight silver down jacket at the shop across from the Nature Center. I found the jackets to be reasonably priced. Plus, the jacket is so light weight that I can fold it up into a ball and fit it in my carry-on. I’ve worn this jacket multiple times at home and it comes in handy when I need an extra layer. Plus, it’s unique because it has a Norway patch on the sleeve. I’ve gotten many compliments and asks about ‘where did you get that jacket’ when I wear it. When I say “you’ll have to go to Eidfjord, Norway to get one,” it always brings a smile. 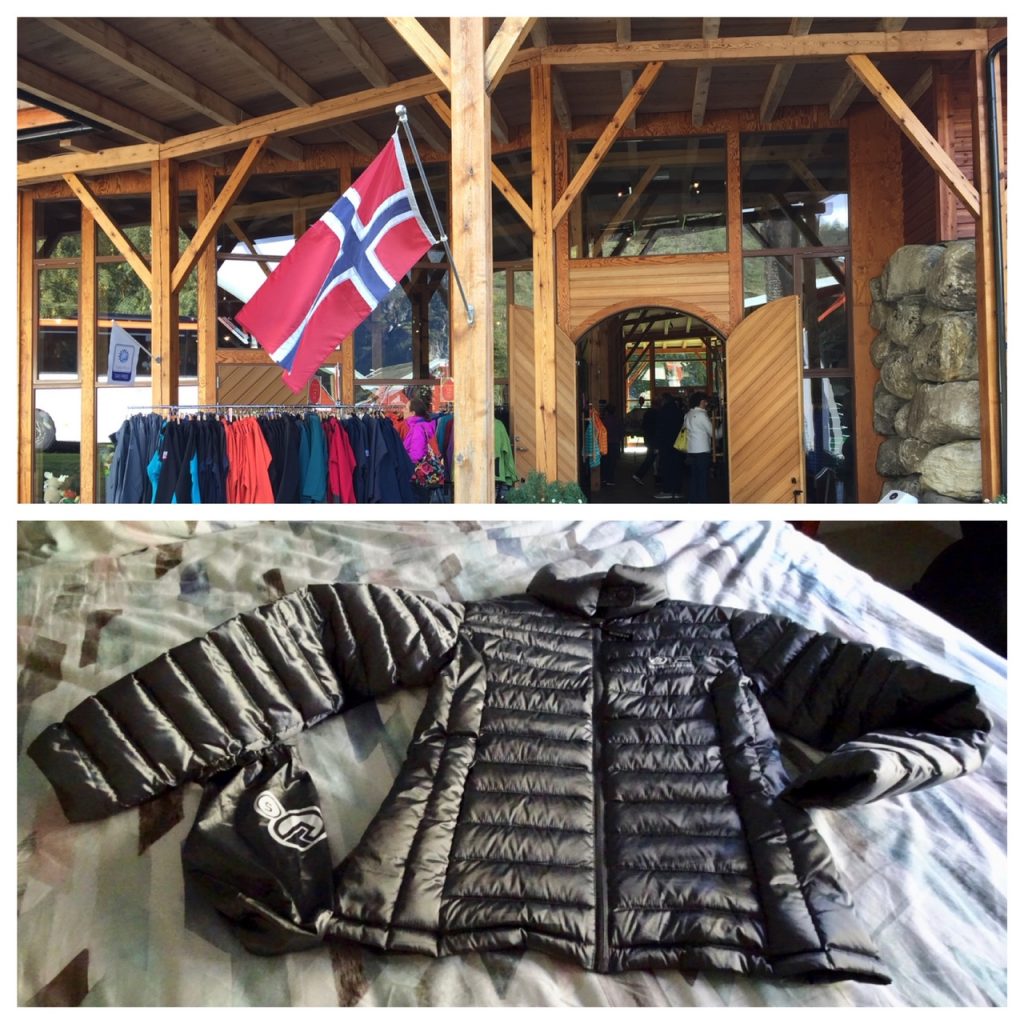 I bought a lightweight Nordic down jacket at the Hardangervidda Shop. 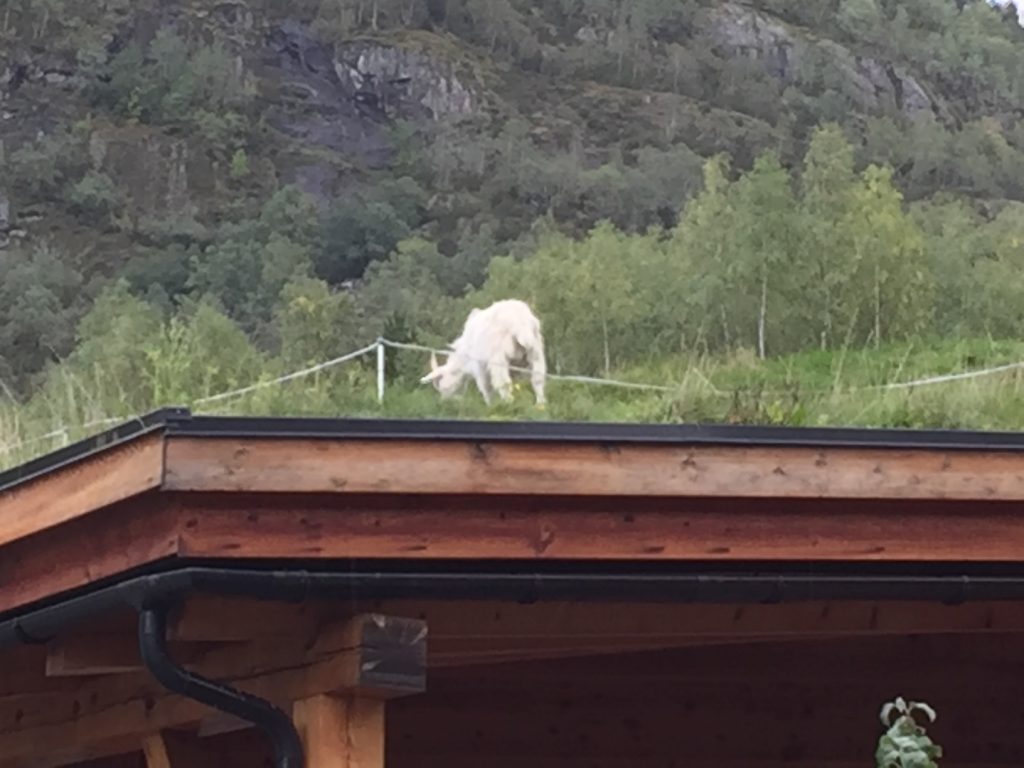 Can you see the billy goats? They live above the shop!

Afternoon tea aboard the Viking Star

After a morning of exploring, it was so nice to be back on the Viking Star for afternoon tea. It’s one of the loveliest times of day aboard the ship. Afternoon tea is held every day from 4:00 – 5:00 p.m. in the Wintergarden Lounge. It’s a classic Viking tradition and not to be passed up. The tea is freshly brewed and the homemade scones with cream and jam are simply scrumptious. Ooh, ooh, ooh, I wish I was back there right now sipping my tea and looking out over the fjords. Maybe if I close my eyes I can mindfully meditate and bring myself back there. ♥♥ 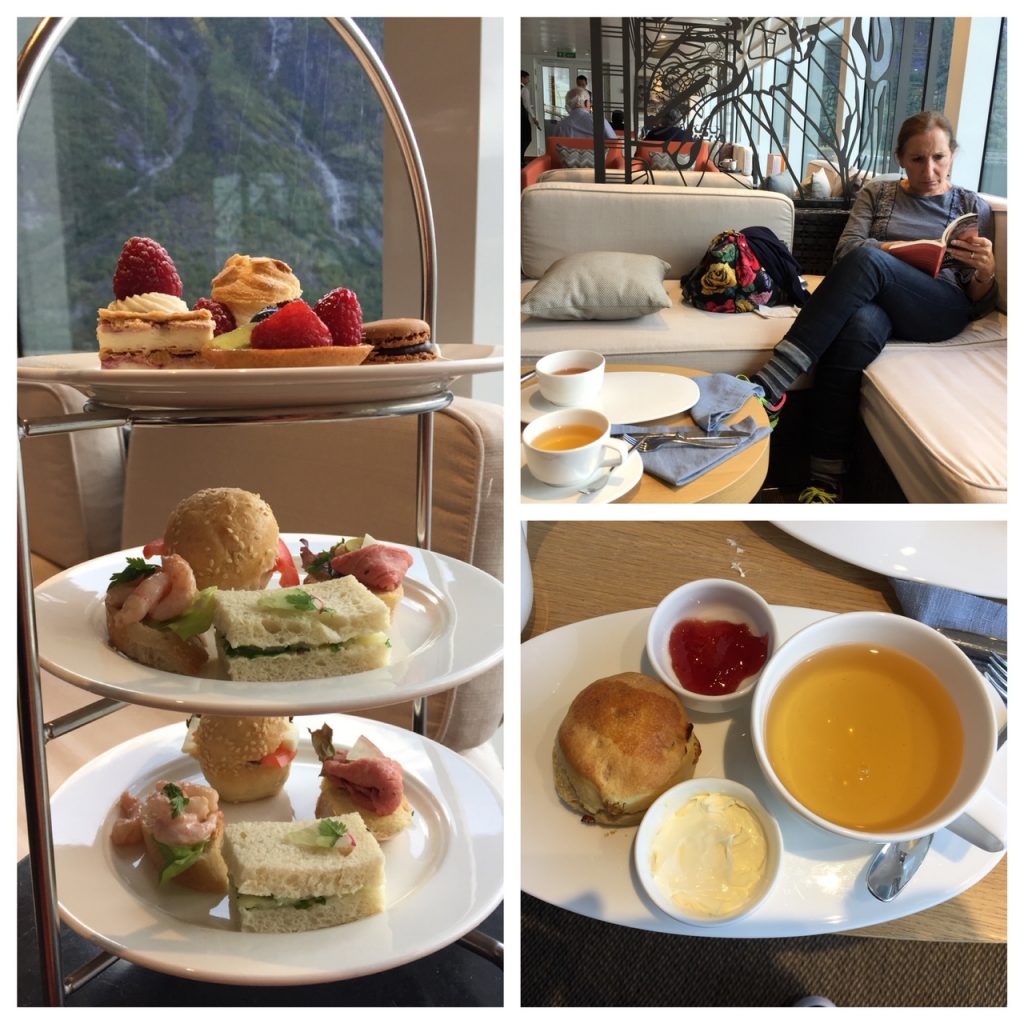 Afternoon tea is the best time to relax while cruising on the Viking Star.

There’s only one more port to share — it’s Bergen. We’ll be there soon.

P.S.: In case you missed my earlier blog posts about my Viking Homelands cruise and my Berlin pre-trip, check them out here:

♥ All Aboard Viking Star: A Great Way To Discover Scandinavia
♥ A First Taste of Berlin’s Culture and Cosmopolitan Cuisine
♥ A Walking Tour of Berlin: Being in the Present, Remembering the Past
♥ Sightseeing in Copenhagen: A Charming Capital City
♥ Foodies Will Love This Culinary Tour of Copenhagen
♥ Visiting Aalborg: An Authentic Look Back at the Life of a Viking
♥ Cruising On One Of Norway’s Most Stunning Fjords