10 Reasons Why You Need to Visit Hip and Cool Portland 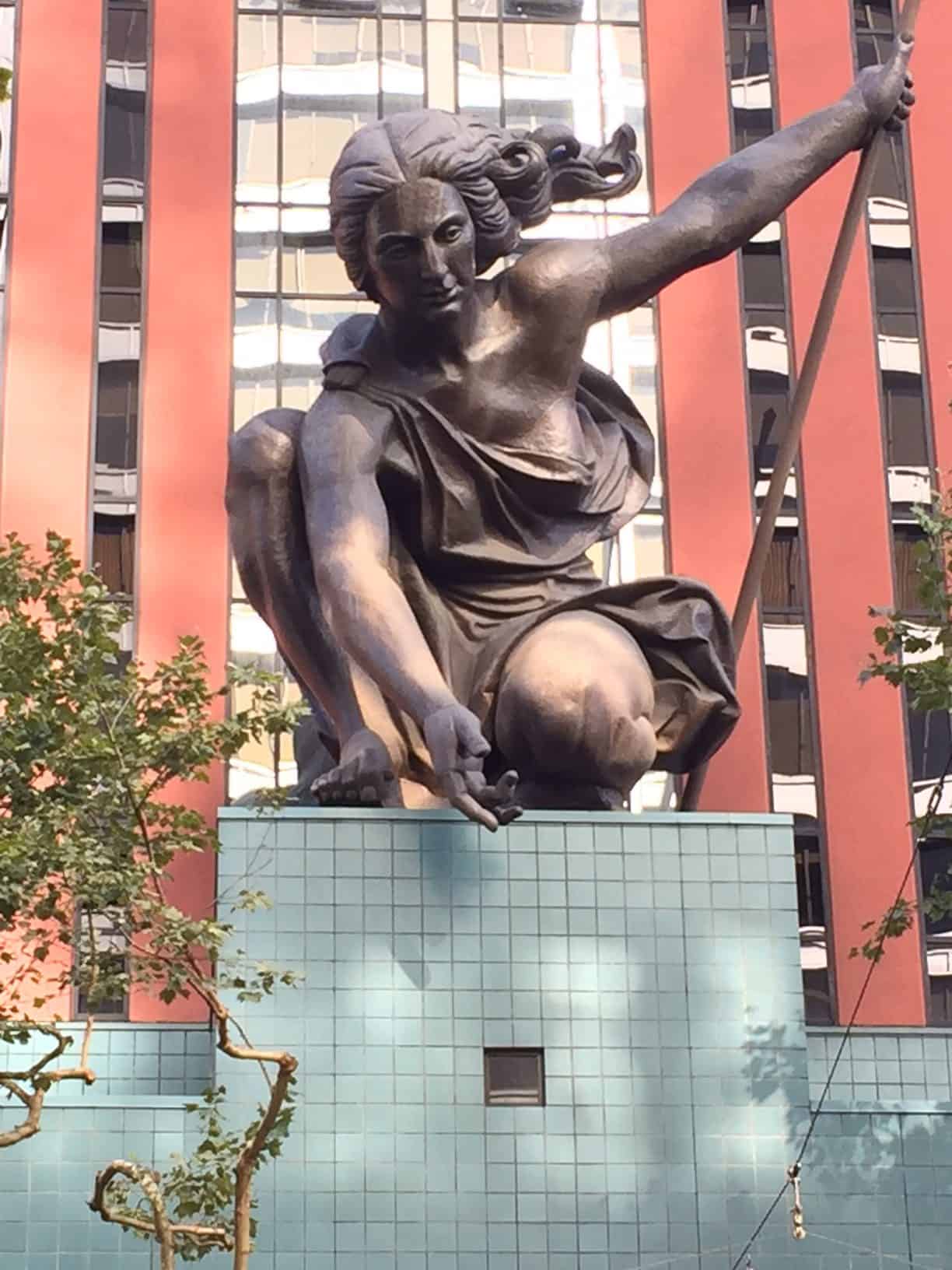 Having arrived in Portland following three wonderful days in The Tualatin Valley (Oregon’s wine country), I knew I was going to love this city from the minute I stepped into the artsy Inn at Northrup Station Hotel in the Northwest part of town. The team from Travel Portland Tourism* had secured my complimentary accommodations and provided a list of activities to see and do in Portland during my two day stay. 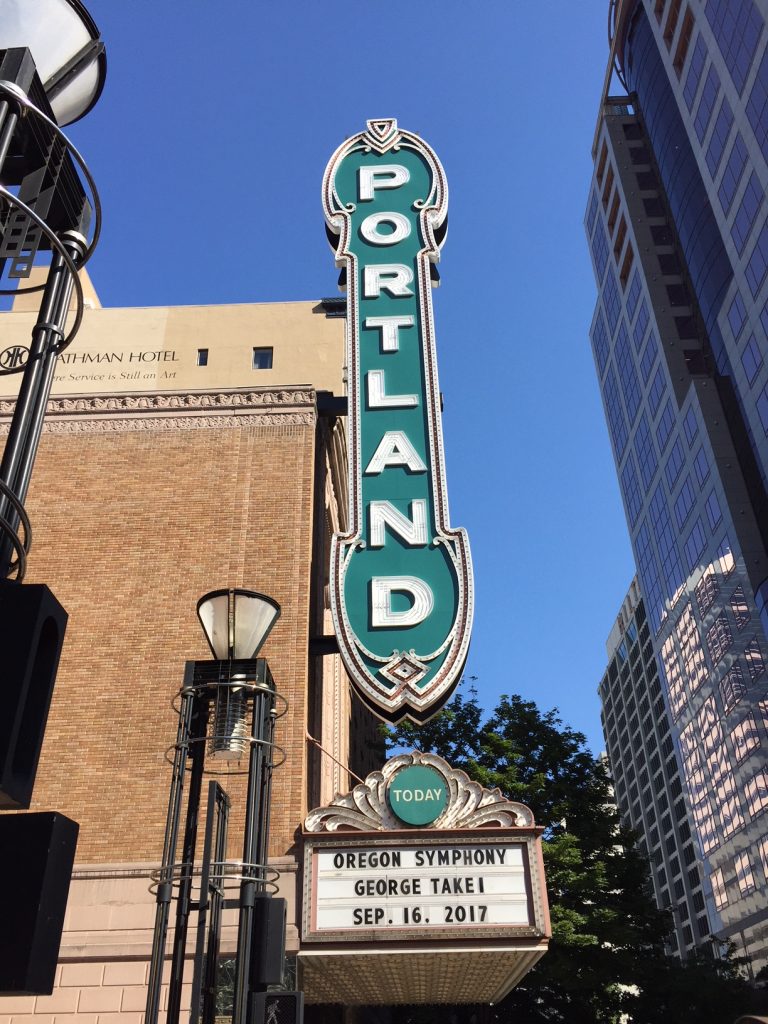 My research on Portland indicated that it is a hip and cool city, but after a Best of Portland Walking Tour, I was more convinced than ever why The New York Times Travel included Portland as one of its “52 Places to Go In 2017.” 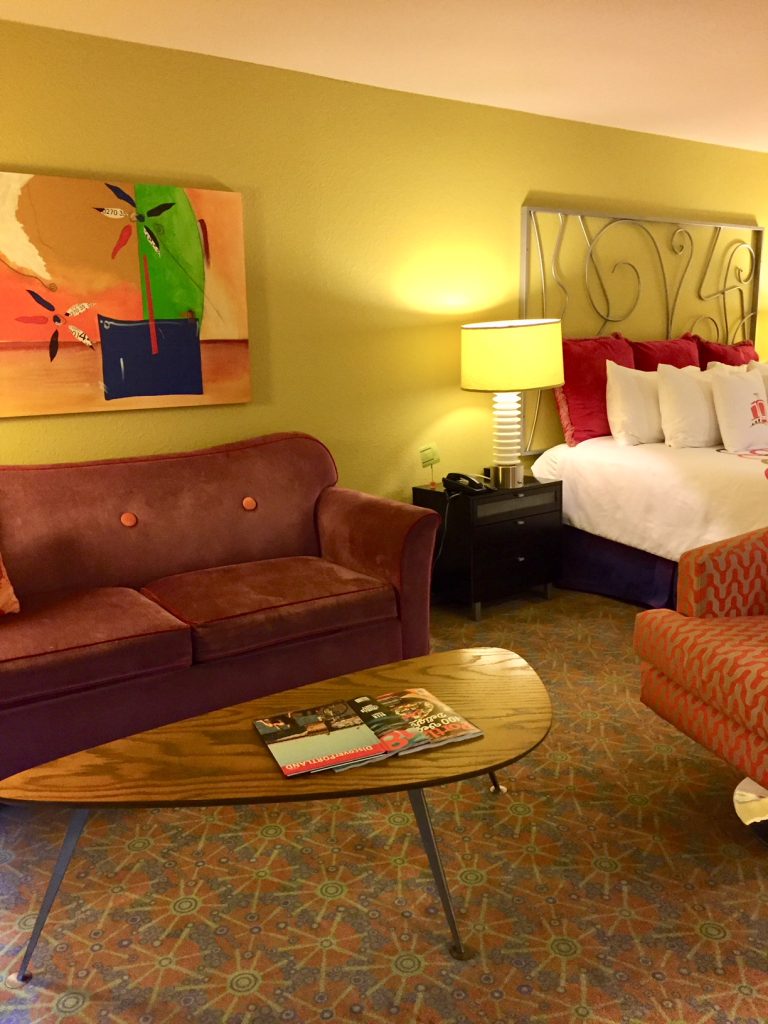 The Inn at Northrup Station Hotel is a great place to stay in Northwest Portland.

If you’ve never been, or haven’t been back in a while, I’m going to give you 10 reasons why I recommend you visit this authentic city. The reasons are based on all that I learned from our tour guide Damon, who spent two hours walking and talking with us about what makes Portland so great. In upcoming posts, I’ll share more specifics. For now, hear me out:

Reason #1: It’s a friendly place to live and a great place to raise a family. Damon told us they even host knitting nights and you’re allowed to raise your own chickens in Portland. (Okay, I know it’s a bit crazy, but if you’ve ever wanted to raise a chicken, yes you can in Portland!!)

Damon mentioned that “average home prices are $300,000 – $400,000 range, which is much cheaper than other western cities like San Francisco or Los Angeles. One of the taglines in Portland is “where young people come to retire.” Why not “where old people come to retire?”

Reason #2: It’s a big city with access to hiking trails on one side and the ocean on the other. Between the country and the coast, there is so much to enjoy if you like adventure in the great outdoors. For example, The Banks-Vernonia Trail in The Tualatin Valley is about 45 minutes from the city and a beautiful spot to go cycling. The Oregon Coast has wonderful beaches about a 90 minute ride away. 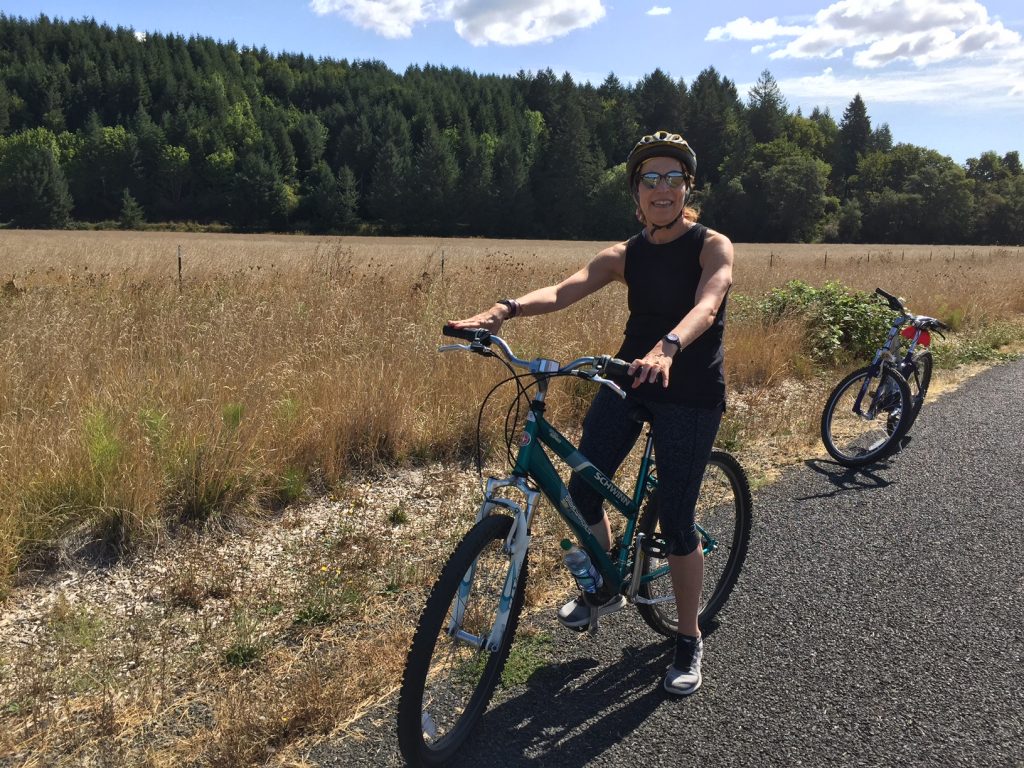 The countryside on the Banks-Veronia State Trail is beautiful.

Reason #3: The food and drink scene is AH-MAY-ZING! In the future, I’ll tell you more about the hot restaurants, from vegetarian to Vietnamese, fantastic food trucks, artisanal donuts, robust coffee roasters, and incredible dark chocolates that make Portland a feast for foodies. For now, let’s just say that it’s ah-may-zing that I didn’t gain 10 pounds while I was there. 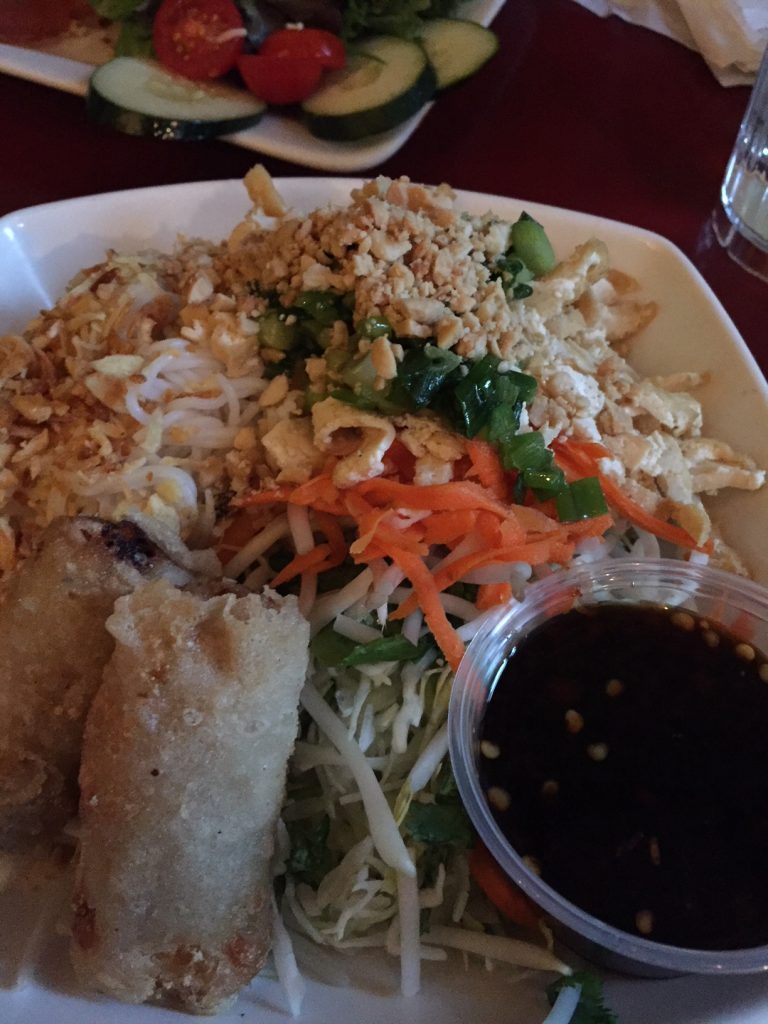 “It’s been called the street food city of the world because of the variety of foods available,” Damon said.

As for drinking, Damon noted: “We have the most beer breweries in the world, because of the fantastic water.” They have water wealth here because it rains so much. Cider breweries are becoming popular as well.

Reason #4: Natural beauty surrounds the city with lots of trees and parks and artwork is an important part of the city. There are more than 200 parks in Portland, including the International Rose Test Garden, one of the City of Roses’ signature landmarks, located in Washington Park. 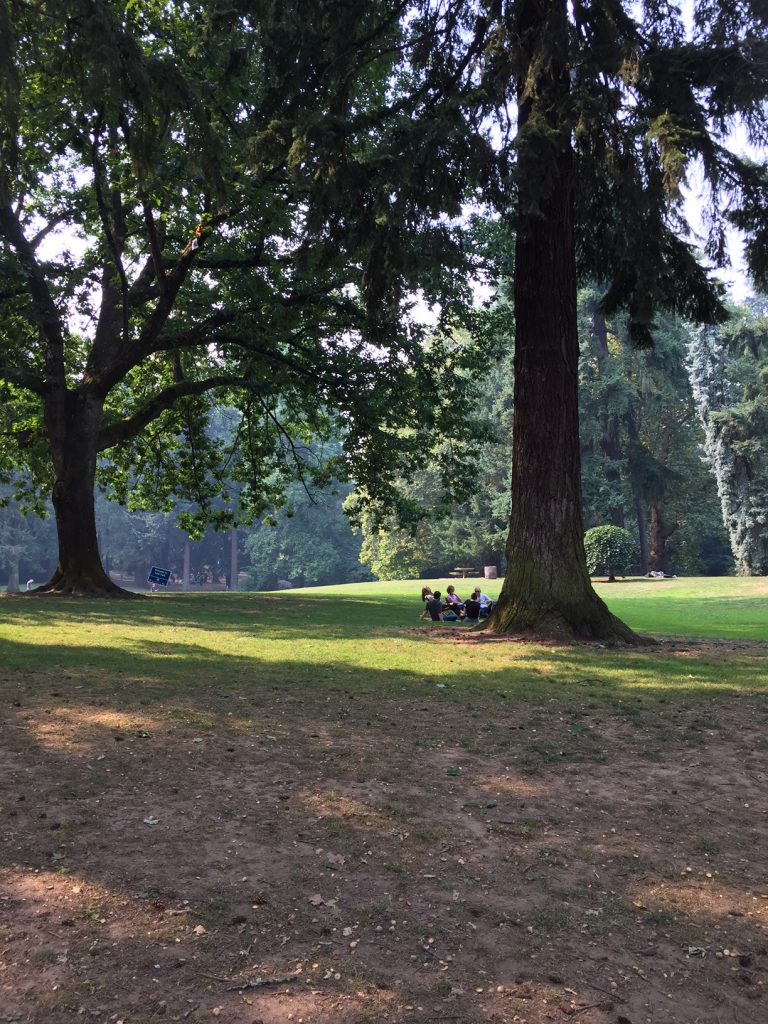 Portland has more than 200 parks in the city.

There are sculptures all over the downtown. Damon said that there is an art tax per person in Portland. “When you are enveloped by artwork it makes it a more civil place,” he said. They have a world-class art museum and a magnificent home for their symphony which holds 2000 people. 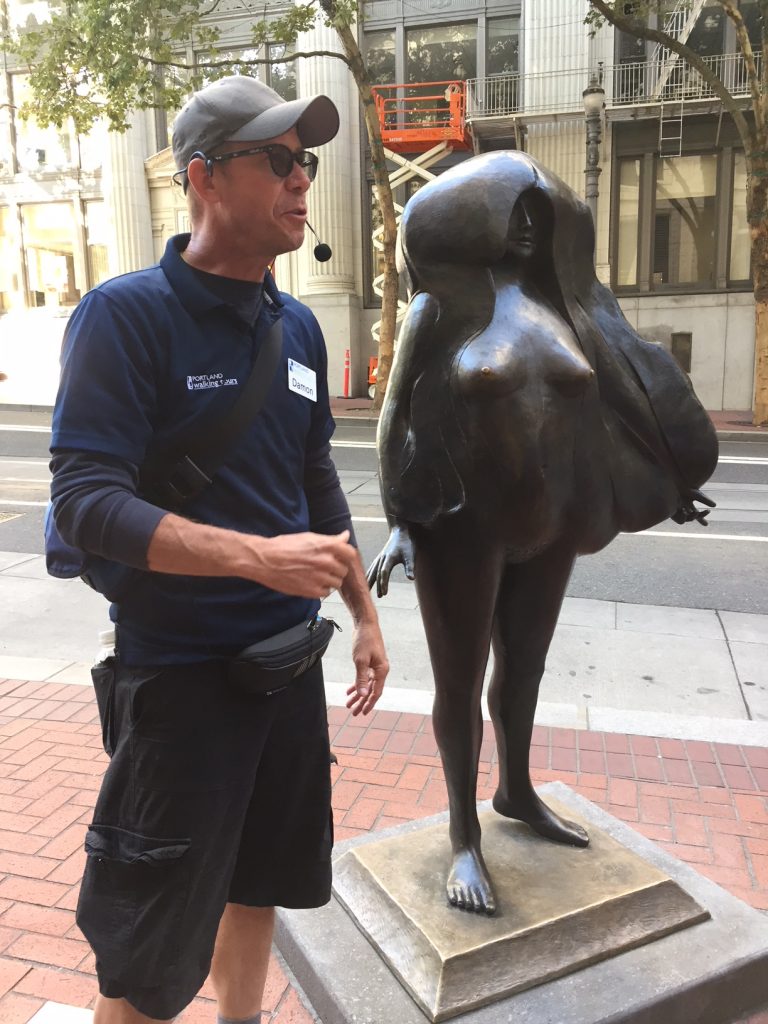 Damon, our tour guide, pointed out all the artwork in the downtown.

Reason #5: There’s urbanization with modernization. Damon described the clear vistas building program which opens up the city intersections with clearance to see five blocks and requires buildings to have large windows on the ground floor. “It makes the city streets less claustrophobic,” Damon said. “You cannot build single level parking lots in downtown Portland. Parking needs to be mixed use, such as with food shops, retail or hotels above or below parking.”

Reason #6: Powell’s bookstore is a landmark. If you love lingering in bookstores as much as I do, you will adore Powell’s City of Books. The store contains about 68,000 square feet of retail space. You can get lost among the nine color-coded rooms and over 3,500 different sections of books. 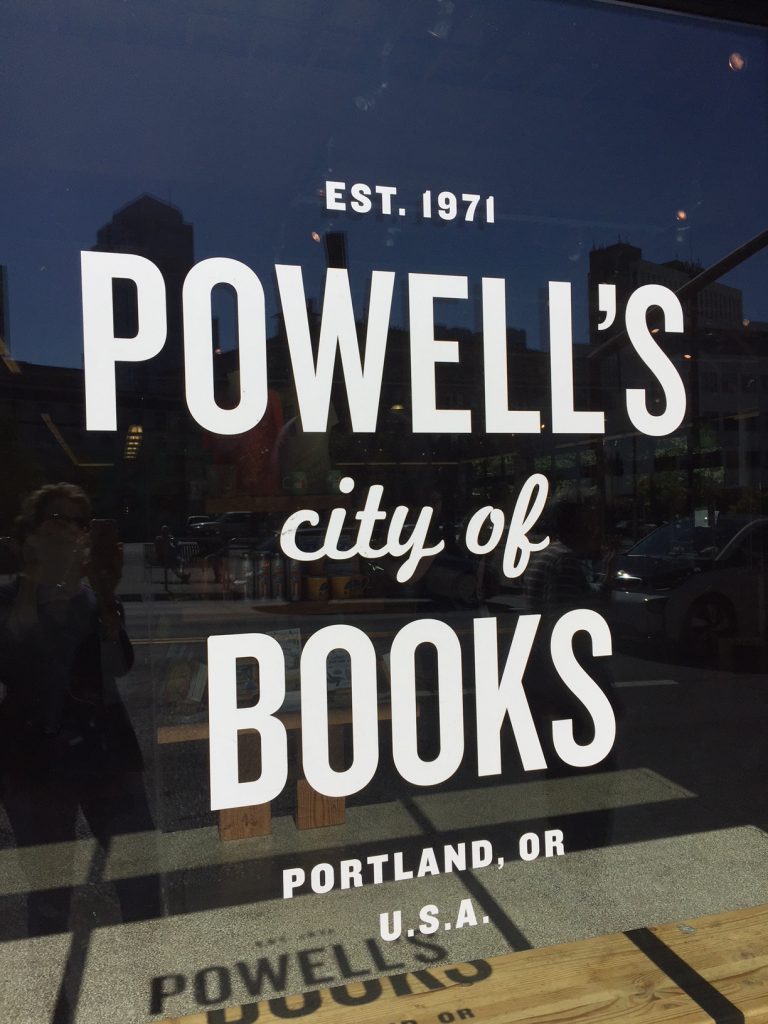 Powell’s Book Store is one of the largest independent bookstores in the world.

Reason #7: They favor alternative transportation. Bicycles are a big deal in Portland. There are boulevards just for bicycles in downtown. It’s so easy to get in and out and around the city with Max Light Rail, bus service and Portland Streetcars. I was very proud of myself for finding my way around downtown by riding on a Portland Streetcar. 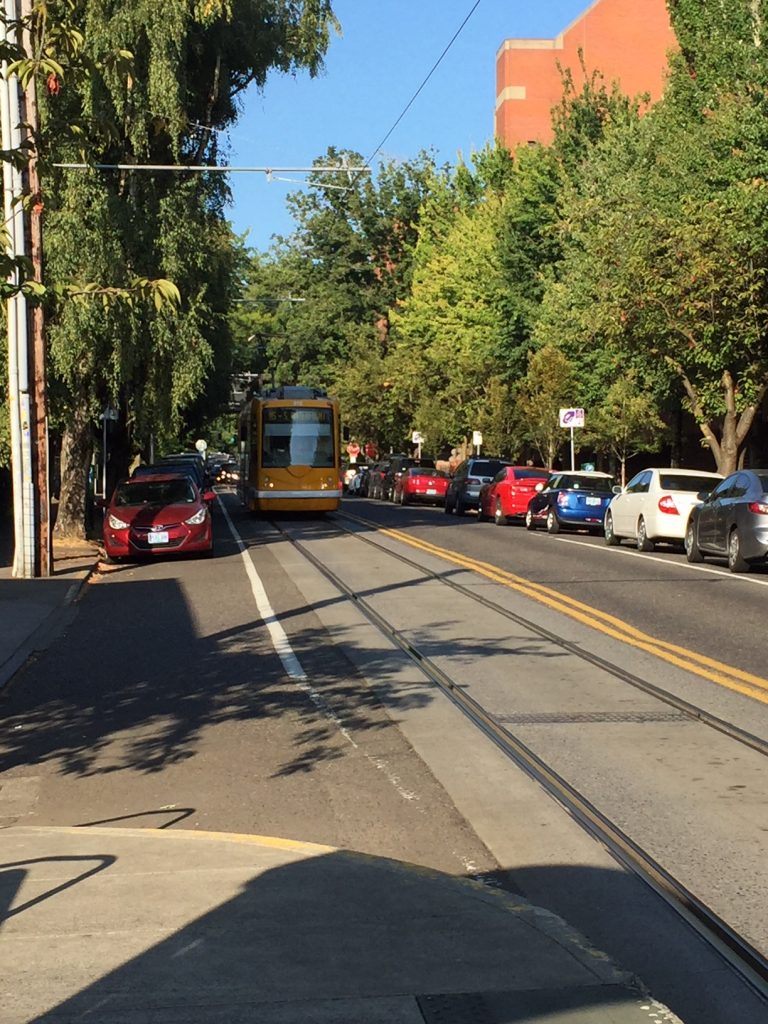 Portland Streetcars are a convenient form of transportation in the city.

Damon did alert us that despite all these alternative styles of travel, Portland is still one of the most congested cities in the country. Oh dear, oh dear!

Reason #8: There are 42 Farmer’s Markets in Portland. OMG, I went to the PSU Farmer’s Market in downtown Portland on Saturday and it was incredible. I’ve been to many farmer’s markets around the world and this one was truly ah-may-zing. 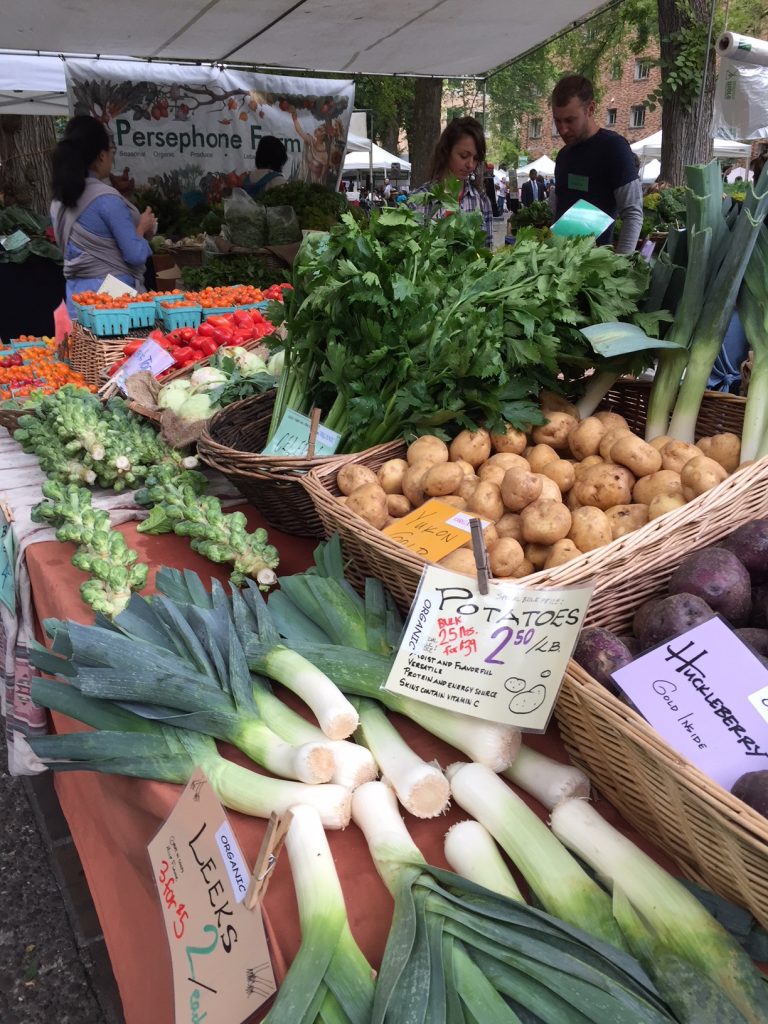 PSU Farmer’s Market is open on Saturdays in downtown Portland.

Damon mentioned that Portland has fantastic soil and that’s why the gardens and farms are abundant with fresh fruits and vegetables.  Marijuana plants grow well here too. Marionberries and hazelnuts are popular Oregon products.

Reason #9: Conservation and sustainability are two hot words in Portland. There are lots of flowering trees and greenery in the city. They have an urban growth boundary. The Federal building has natural lighting, a rain system, and is platinum level LEED certified. Hybrid and electric cars are trendy with electric charging stations around the city. 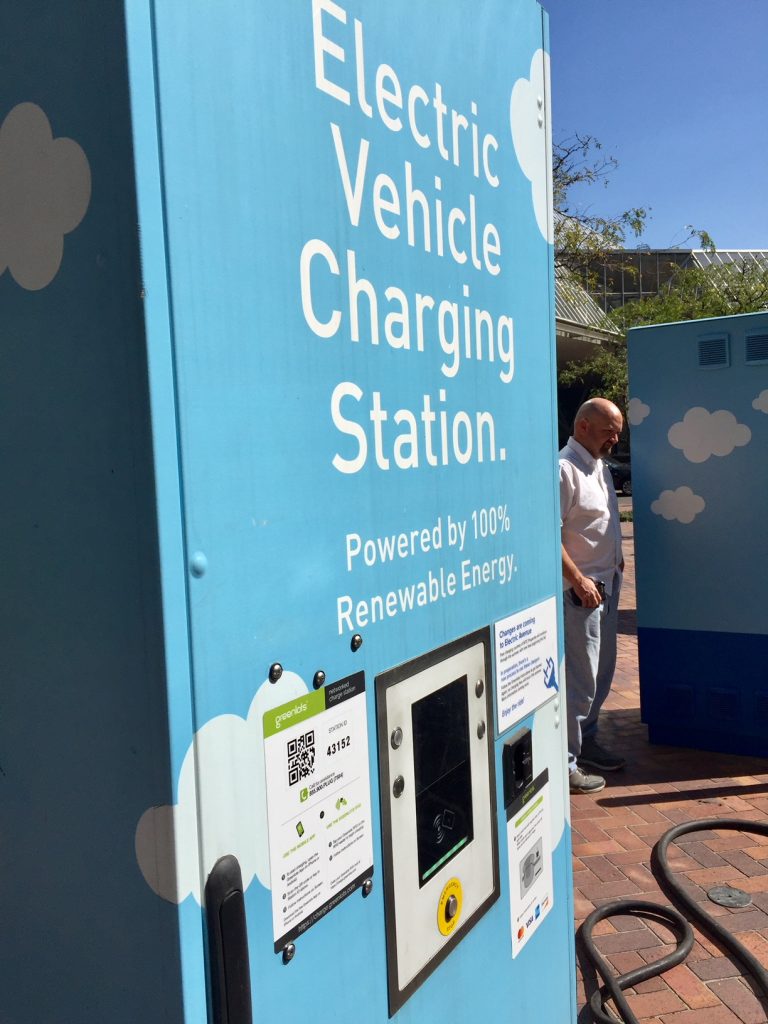 You can add juice to your electric car at charging stations.

Reason #10: It’s the best place to raise a dog. According to the Estately blog: “The Rose City falls over itself to spoil its dogs. With 33 dog parks, Portland has the most per capita of any large city in the United States. It also boasts 19 pet massage therapists, its own social network for dog lovers, and it’s one of Rover.com‘s Top 20 Cities.” 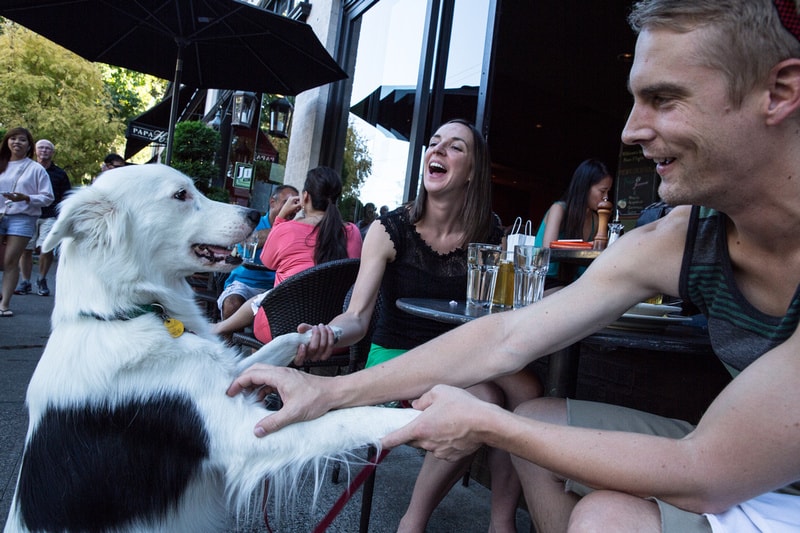 Not that I own a dog or plan to get a dog in the near future, but it’s nice to know. 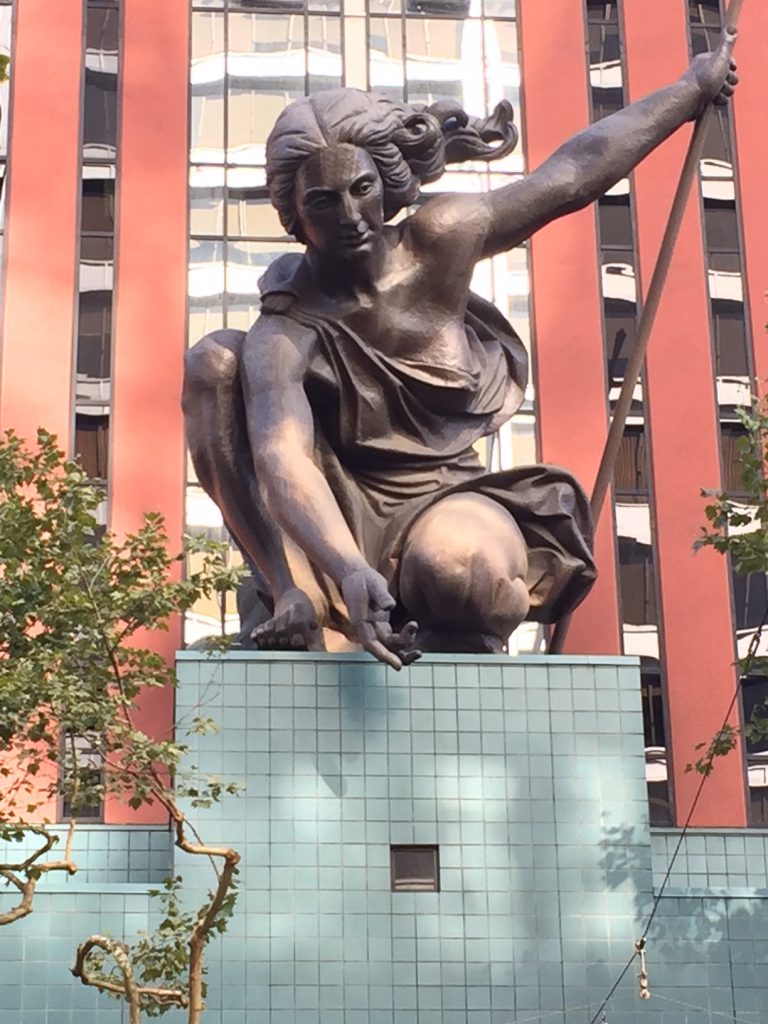 The television show “Portlandia” is named after the queen of commerce, whose statue sits on The Portland Building.

There are many more reasons that make Portland hip and cool. Did you ever watch the show Portlandia? It’s quite amusing and offers a quirky view of this hipster town.

Are you ready to book your trip yet? If not, you’ll just have to wait until I share more stories and photos about my pleasurable moments in Portland.

*Disclosure of Material Connection: The Travel Portland Tourism secured my complimentary lodging and Best of Portland Walking Tour. Regardless, I only recommend products or services I use personally and believe will be good for my readers.