You May Be Getting Older, But You Can Still Have Fun!

This post is sponsored by Warner Bros. Pictures. All opinions are my own.

Since turning 50 my philosophy has been that while I may be getting older, I can still have fun. That’s why when the PR team at Warner Brothers contacted me about writing about this topic, I said “absolutely.” It’s one of the key themes of their new movie, Going In Style, which will premiere in theaters on April 7th.

Going In Style
The new comedy stars some of my favorite Oscar-winning actors, Morgan Freeman, Michael Caine and Alan Arkin. They play lifelong buddies Willie, Joe and Al, who decide to buck retirement and step off the straight-and-narrow for the first time in their lives when their pension fund becomes a corporate casualty.

Desperate to pay the bills and come through for their loved ones, the three risk it all by embarking on a daring bid to knock off the very bank that absconded with their money.

Ann Margaret, who BTW is 75 years old, plays Al’s love interest. She looks amazing and her voice is just as lovely as when she was a teenager in Bye, Bye Birdie. The director of Going in Style is actor, director, and screenwriter Zach Braff (who starred in the television series Scrubs and was born and bred in New Jersey).

Note: To my email readers, if you cannot view the video, please click here.

Over 50 And Having Fun
Just as Willie, Joe and Al, show us in the movie, you can grow old but that doesn’t mean you have to grow up. There are many positives to letting go, trying new adventures and having fun during your second, third or fourth act. 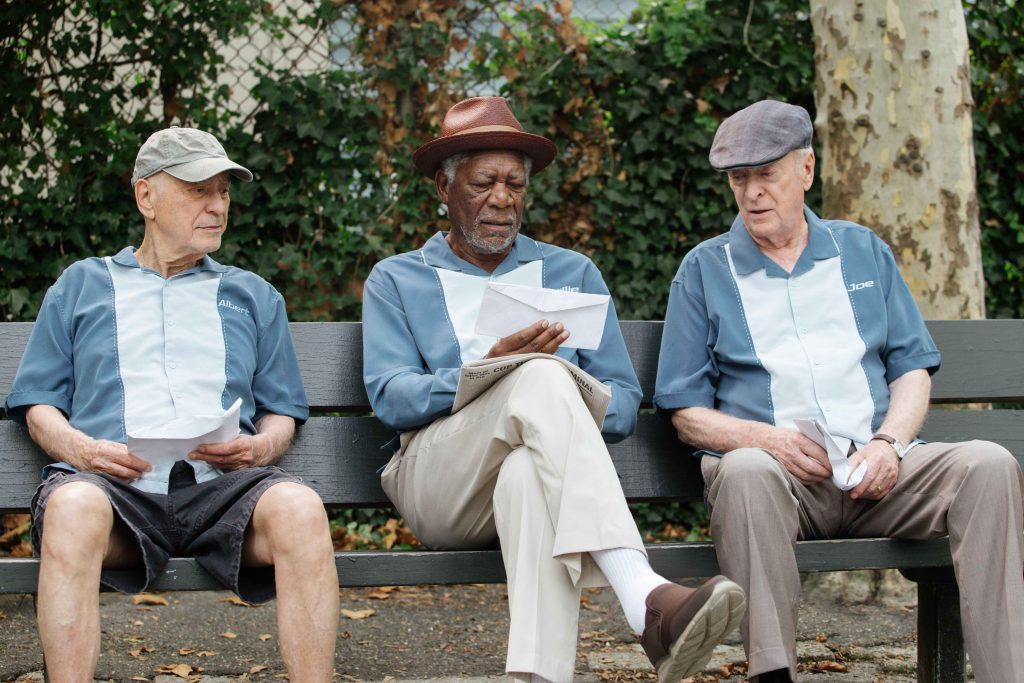 Climbing High: At 51, I attempted rock climbing for the first time when I visited the Miraval Spa and Resort in Tucson, Arizona. It was about a year after my husband M had passed away and it was my first-ever vacation on my own. The climb was exhilarating. I made it halfway up the mountain and then my legs became shaky. I remember how proud I was for attempting such a feat. I always said I would go back one day and climb that big mountain again, next time to the tippy top. Now that I’m physically stronger I may take up that challenge when I turn 60 next year. 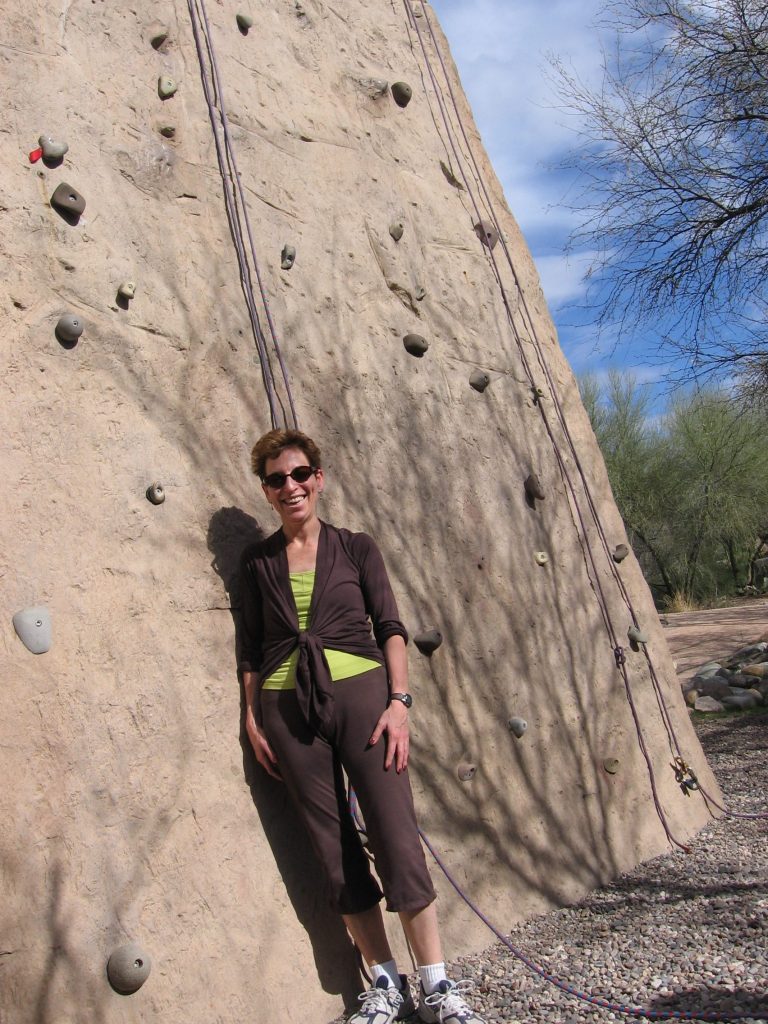 Rock climbing for the first time was exhilarating.

Jumping In: Not the greatest swimmer, I usually am pretty timid when it comes to jumping in a pool or body of water. “Are you going to join us in the water?” asked my daughter A during our trip to Italy’s Amalfi Coast last summer. We were on a boat heading back from Capri to Positano, where we were staying for the week. There were fish swimming around the boat and everyone was having a great time.

Was I going to miss my chance to swim in the magnificent blue waters of the Mediterranean? I sat on the edge of the boat and inched forward. Letting go of my fears, I sat down on the ledge of the boat and jumped in. My head went under and then I popped up. “I did it,” I said. “I jumped in!” It was so worth the plunge. 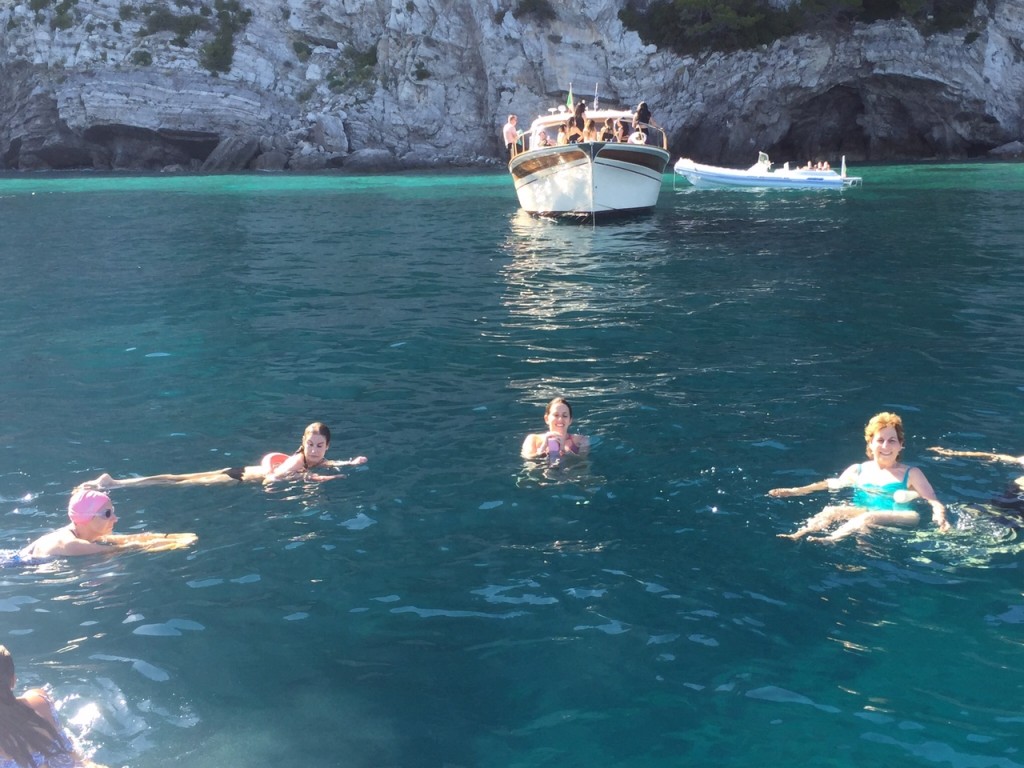 Swimming in the Mediterranean water was awesome.

Seeing the Glass “Half Full”
I’ve learned from my mindfulness and yoga training, it’s better to live in the moment than ruminate about the past or worry about the future. I’m also a big believer in keeping a positive attitude as you grow older. In fact, earlier this week The New York Times reported that “a good outlook is linked to lower blood pressure, less heart disease, better weight control and healthier blood sugar levels.”

My boyfriend L and I went to see a preview of Going In Style last night at our local theater. We sat back in the bucket seats and we didn’t fall asleep. Nope, neither of us fell asleep before the movie was over – which is another big feat during our life after 50 and for L after 60. We laughed a lot. L laughed more than me. I think he laughed more because at his age he could identify with Willie, Joe, and Al.

“I hope we’re both as fun as those three guys as we grow older,” I said to L. “And let’s make sure our eye-view is not ‘half empty’ but always ‘half full’and getting fuller!”