A Remarkable Story About “Woman In Gold” 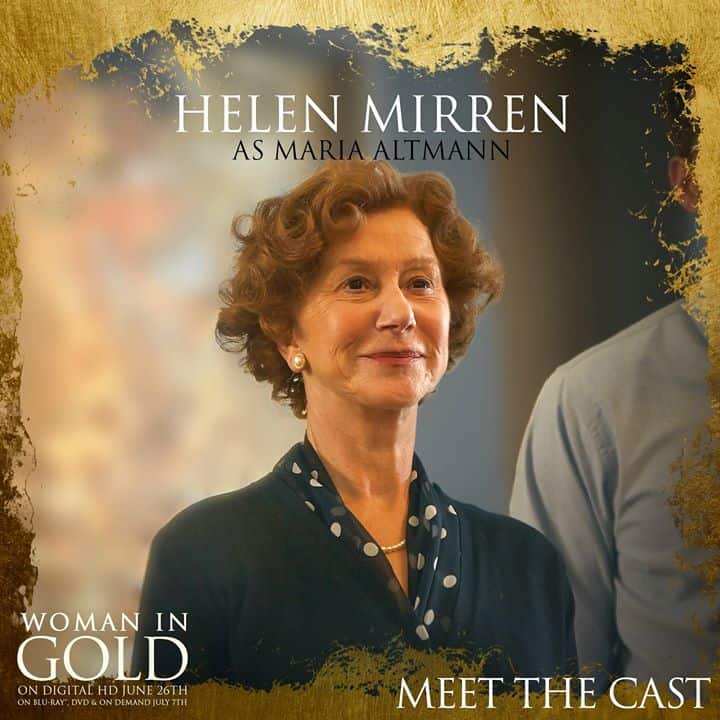 I pass the Holocaust exhibit at Katz Jewish Community Center in Cherry Hill, NJ, each day when I go to my yoga class. It’s a constant reminder of the atrocities that Jewish people endured during World War II. I shudder every time I look at the pictures on display.

Feelings about these times were stirred deep down as I watched Woman in Gold this weekend. The film is based on the true story of a Jewish woman’s journey to reclaim her family’s artworks that were seized by the Nazi’s. She aims to seek justice for what happened to her family more than 60 years ago after being forced to flee her home in Vienna. 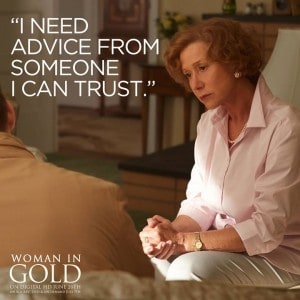 Anchor Bay Entertainment provided me with a copy of the Blu-ray and a $100 gift card to help me mark my own moments in history. In addition, they are providing the same sample and prize package to one of my readers – so after you read my review, I hope you will enter the giveaway below. It’s a movie worth watching.

#ad #WomanInGold is a remarkable story of an elderly Jewish woman who seeks justice for what happened in WWII.

A Stellar Cast
Academy award winner Helen Mirren plays the lead as Maria Altmann, an elderly Jewish woman, who hires Randy Schoenberg, a young lawyer (played by Ryan Reynolds), to help her gain back her family possessions, the most famous among them Gustav Klimt’s painting of Portrait of Adele Bloch-Bauer I, also know as “Woman in Gold.” We learn through flashbacks and storytelling that Adele is Maria’s aunt and how close she and her sister were to her aunt while growing up. 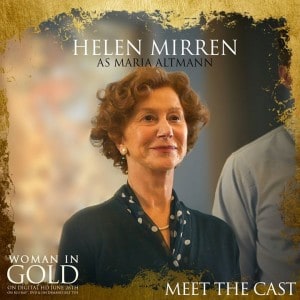 Maria and Randy embark upon a major multi-year battle which takes them to Vienna –back to many difficult memories that Maria must face, including her deep sadness about leaving her parents during the Nazi occupation, while she and her husband escaped to the United States. The case hits the Austrian establishment at its heart and goes all the way to the U.S. Supreme Court.

“People see a masterpiece. I see my aunt, a woman who used to talk to me about life,” says Maria.  “We should be reunited with what is rightfully ours.” That’s all I’ll reveal, you’ll have to watch the movie to learn more about this historic lawsuit.

An Interview With Helen Mirren
I admire Helen Mirren not only for the strong females she plays in movies and on stage, but also for her powerful personality in real life. In April, I had the opportunity to see Helen, who at 69 looks absolutely amazing and ever stylish, be interviewed at the Women In The World Summit in New York City. (Read my post about the Summit.) She highlighted how aging has impacted her life. “One of the pleasures of getting older is you see changes,” said Helen. “When my mom was growing up it was inconceivable that women could read the news.” 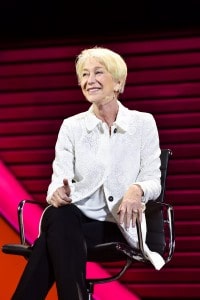 Helen Mirren was interviewed at the “2015 Women in the World Summit.”

Helen shared that she waited until she was 50 to get married and said, “The most important thing to teach our daughters is to gain financial independence. It’s been a driving force in my life.” About women in the media, Helen commanded, “We’re half the human race. Change roles for women in life and you will change roles for women in drama.” (Go Helen! Go Helen!)

Go See The Real “Woman in Gold” Masterpiece
I just read in the New York Times that Neue Galerie at 1048 Fifth Avenue, at 86th Street, neuegarlerie.org, has the real Gustav Klimt masterpiece of “Adele Bloch-Bauer: Woman in Gold” on display through September 7th. According to the Times, “this small show features the portrait along with eight other Klimts and an assortment of jewelry and decorative objects typifying the luxurious lifestyle of Adele and Ferdinand Bloch-Bauer, the collectors who commissioned it. Ronald S. Lauder (from the Estee Lauder cosmetic family) purchased the painting in 2006 for $135 million. 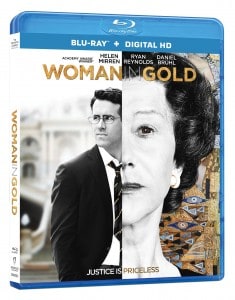 Prize pack value totals $134.99 and is open to US mailing addresses only. Prizing is provided by Anchor Bay Entertainment-ray™ and DVD special features include “The Making of Woman in Gold,” “feature commentary with Director Simon Curtis and Producer David M. Thompson” and “Stealing Klimt Documentary Trailer,” with an additional piece “Neue Galerie New York Press Conference” available on the Blu-ray™ and Digital Download. Enter via Rafflecopter below.

Good luck with the giveaway!