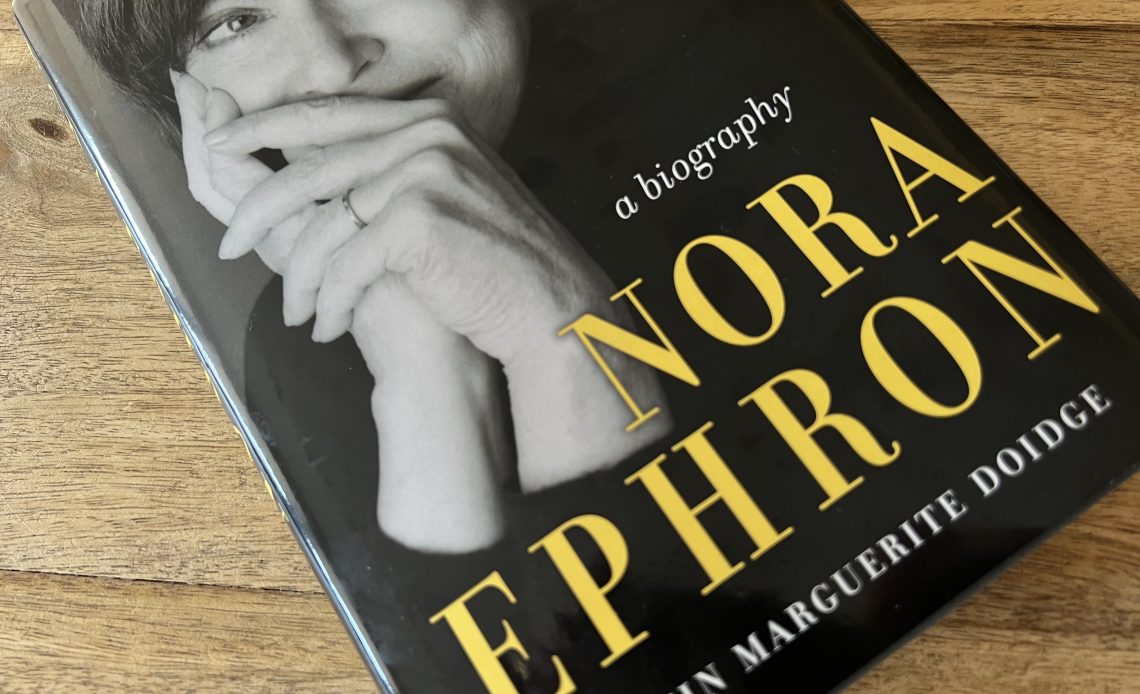 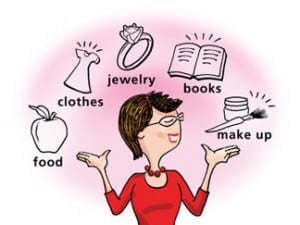 If you’re a fan (like I am) of the late writer, essayist and screenwriter Nora Ephron, you’ll enjoy reading the new biography about her life and work by award-winning journalist and professor Kristin Marguerite Dodge. I loved Nora Ephron: A Biography so much that I’m offering a giveaway for a copy (compliments of its publisher Chicago Review Press). So be sure to read my review and find out how to enter below.

Born to be a writer

Born to screenwriter parents Phoebe and Henry Ephron, some say Nora “learned to write in the womb.” Her mother’s famous credo was “Everything is copy.” In fact, some of the famous lines in her screenplays were garnered from conversations at family gatherings and dinner tables.

It wasn’t always easy for Nora, the oldest of four daughters, who was swept away from New York City to live in Beverly Hills, California at a young age. Both her parents were alcoholics and her mom died in her mid 50s from cirrhosis. 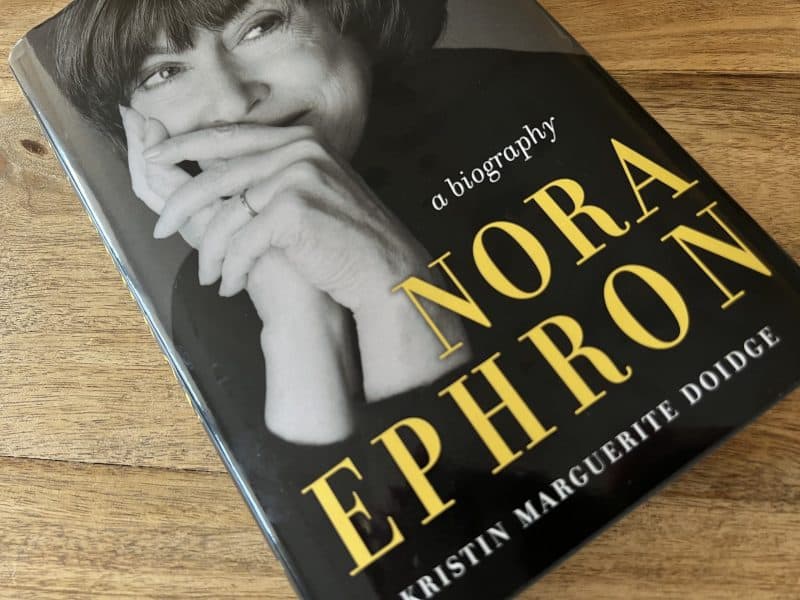 Nora Ephron: A Biography shares the life and work of this amazing author, journalist and screenwriter

From the early years to the end

The biography is divided into five acts. Act I, her growing up years from 1941 – 1958, is followed by Act II during her time at Wellesley College and afterwards as a budding journalist from 1958-1962. Act III introduces her years as a wife to noted author and journalist Carl Bernstein (this was a second marriage for her) and mother to two boys Jacob and Max, as well as the downfall of their marriage and the beginnings of her enduring love with third husband, author, journalist and screenwriter Nick Pileggi. Act IV delves into Nora the Filmmaker from 1989 – 2000s, including all the films that made her a household name.

Act V from 2000 – 2012 provides a glimpse of the private stars struggle with MDS, a rare blood disease and ultimate leukemia that took her life way too early at 71 in 2012. Despite a serious illness that she kept hidden from colleagues and friends, Nora remained driven to succeed, directing her final film Julie & Julia in 2009, about Julia Child and a blogger who prepares all her recipes. The film captured Nora’s passion for food, for Paris, and for living life to the fullest each day. 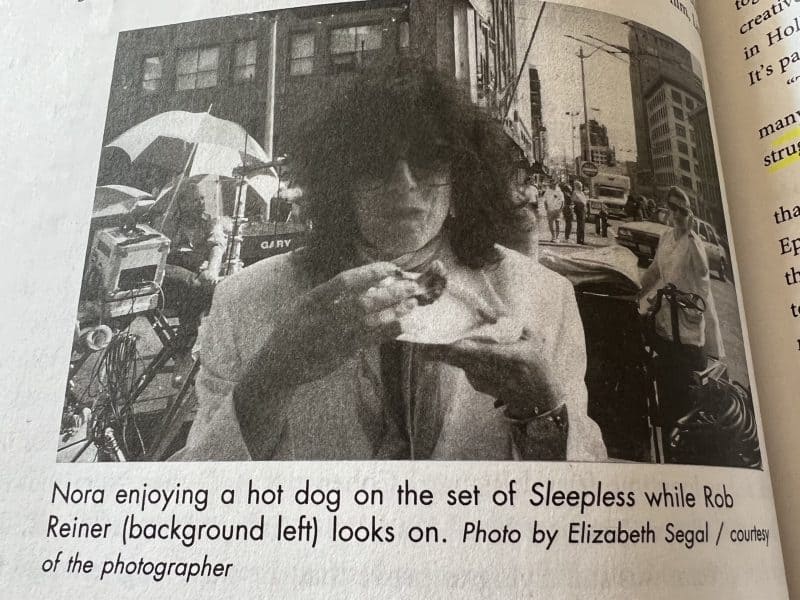 Five decades as a filmmaker

It wasn’t until reading Nora Ephron: A Biography that I realized the depth and breadth of her talent as a screenwriter and director. Several of these scripts were written with her equally talented sister Delia. It’s also interesting to note that she didn’t become a director until she was approaching 50.

Her hits include my all-time favorite rom-coms – When Harry Met Sally; Sleepless in Seattle; You’ve Got Mail — movies that I’ve watched on repeat and continue to laugh and cry at even though I know the endings.

“I’ll have what she’s having” from When Harry Met Sally is part of the American Film Institute’s list of the 100 top 100 film quotes. For those who’ve seen the film, surely you remember the scene with Meg Ryan as she fakes an orgasm in a Jewish deli. It was priceless. BTW, that’s the title of a current exhibition in Los Angeles about Jewish delis. (Ooh, ooh, ooh, and it’s coming to NYC this fall.)

In You’ve Got Mail, about bookshop owner Kathleen Kelly, Dodge shares a quote from cinematographer John Lindsey that echos how personal the messages and meanings were to Nora in this film. “When you see You’ve got Mail, you’re seeing Nora,” said Lindley. “It’s not just in the dialogue or the wit. It’s not just that Roald Dahl was her favorite children’s author, or that daisies were her favorite flower; what you’re seeing is her outlook on life, which is to be happy and embrace change.”

According to Dodge’s biography, You’ve Got Mail remains one of the highest-grossing films directed by a woman, “ultimately bringing in nearly $116 million domestically and nearly $251 million worldwide in overall box office receipts.” 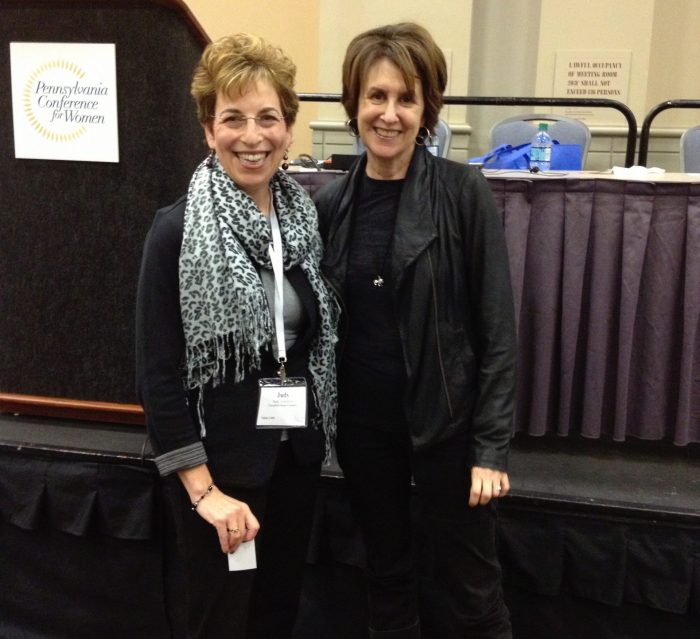 I met Delia Ephron, Nora’s younger sister in 2012 , shortly after her sister died

A writer through and through

Beyond her many screenplays, Nora was a prolific writer. She is the author of the novel Heartburn, about the breakup of her second marriage, and multiple other essay collections, including my midlife favorite, I Feel Bad About My Neck.

If you are post 50 and haven’t read I Feel Bad About My Neck, go read it. Like Nora says, “Every so often I read a book about age, and whoever’s writing it says it’s great to be old. It’s great to be wise and sage and mellow; it’s great to be at the point where you understand just what matters in life. I can’t stand people who say things like this. What can they be thinking? Don’t they have necks?”

Spot on Nora! Now that I’m in my mid-sixties it’s all about the neck! 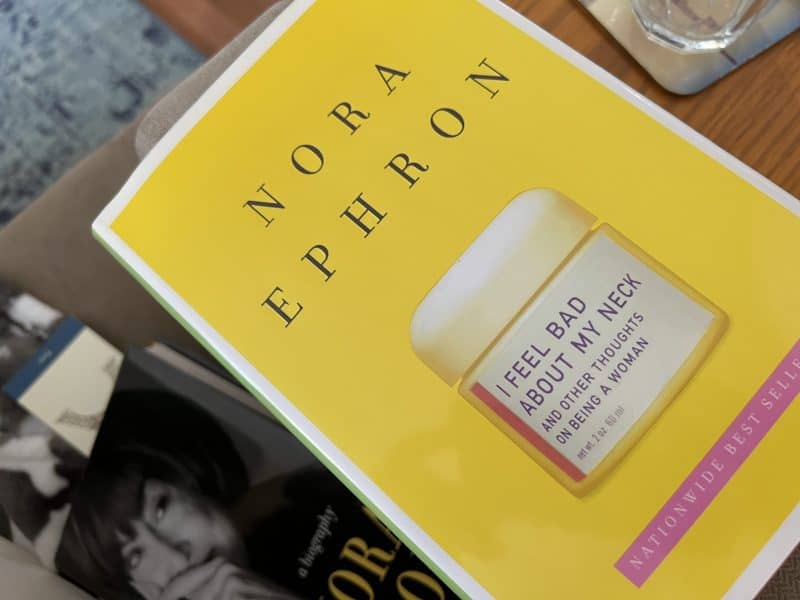 Enter to win a copy of Nora Ephron: A Biography

To enter my giveaway, leave a comment and LMK which of Nora Ephron’s movies was your fav and/or fill out the rafflecopter entry below. USA entries only.

P.S. It was interesting to go back and read my blog post from 2012 highlighting a talk by Delia Ephron, Nora’s younger sister, at the Pennsylvania Governor’s Conference for Women. It was a few months after Nora had died. I can’t imagine what Delia was feeling at the time. She was as prolific as her sister.

Follow Me @judiboomergirl
On my blog this week (link in profile), I review t

On my blog this week (link in profile n profile),