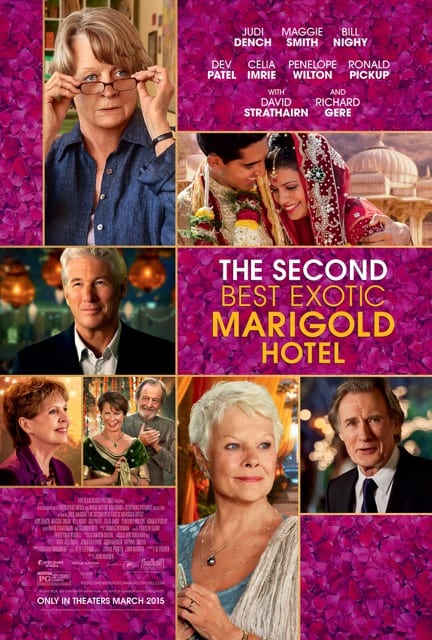 “Richard Gere joins the cast of The Second Best Exotic Marigold Hotel,” said the nice PR representative when she asked me if I wanted to preview and promote the new movie.* “Say no more,” I quickly responded. “Count me in. I’ve had a crush on Richard Gere since I saw him in Pretty Woman several decades ago.”

I so enjoyed The Best Exotic Marigold Hotel when it premiered in 2012 and was excited to learn that there would be a sequel. If you haven’t seen the first movie, it was about a group of British retirees who go to India after reading about a restored Marigold Hotel. When they arrive the hotel is not as advertised and it’s proprietor Sonny, not as polished. Despite the lack of amenities and poor conditions, they are forever transformed by their shared experiences, discoveries, and love affairs during their stay. 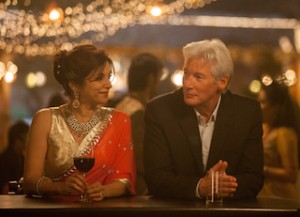 So what is the gang up to this time?
With so many of my favorites returning for the second adventure, including Judi (my namesake) Dench, Maggie Smith, Bill Nighy, and Dev Patel to name a few, I knew I wouldn’t be disappointed.

The story continues with more twists and turns — an impending marriage for Sonny (Dev Patel) to the love of his life, Sunaina (Tina Desai); a potential expansion of the thriving hotel; a rooming dilemma for guests Guy (Richard Gere) and Lavinia (Tamsin Greig); jobs in Jaipur for Evelyn and Douglas (Judi Dench and Bill Nighy); love upsets for Norman and Carol (Ronald Pickup and Diana Hardcastle); dueling admirers for Madge (Celia Imrie); and a hotel managerial role for Muriel (Maggie Smith), the wise and mature one of the bunch. Plus, there’s a big Indian wedding being planned with lively dancing which adds to the fun.

Love and inner adventure bloom the second time around
Watching these mature characters step out of their comfort zone made me ponder the ways my own life and love have evolved over the past few years. 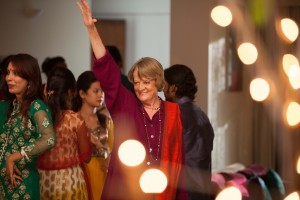 Maggie Smith as Muriel is as stellar as always.

As a young retiree, I found pleasure watching these elders explore new adventures and relationships. “If not now, then when or why not” is often my current way of thinking, or as Muriel (Maggie Smith) says, “Let it go. There’s no present like the time.” With an empty nest and my children all grown, I too feel a renewed sense of freedom, almost like when I was 25 and anything was possible. I so appreciate learning and growing my mind, body, and spirit these days and that’s exactly what I am doing with my yoga practice and yoga training. 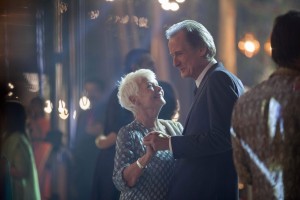 Judi Dench as “Evelyn” and Bill Nighy as “Douglas” make a lovely pair.

And love continues to bloom with my boyfriend L. Hear that Richard? Yep, you lost your chance! I will likely see all your future movies, but the one man I adore during my life after 50, the gray-haired guy that tops my list, is my soon to be going-on-seven years companion — my boyfriend L. (Mind you, if I ever write my memoir and it ever becomes a movie, you Richard , yes, you Richard, are the only actor I want to play my suitor.) 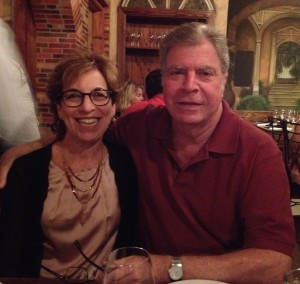 My boyfriend L is my “gray-haired” companion. Doesn’t he look like Richard Gere?

When can you see The Second Best Exotic Marigold Hotel?
Have I enticed you with the themes? Have I engaged you with the fabulous cast? Do you find Richard Gere as sexy as I do even though he just turned 65? For more highlights:

This heartwarming movie opens at theaters this Friday, March 6. I will likely go see it again with my boyfriend L and maybe we will go to Coriander for dinner, our favorite Indian restaurant.

For now, go, go, go cherish every moment. It’s never too late to take a giant step forward. Evelyn’s (Judi Dench) advice says it all: “How many lives can we have? As many as we can.”

Before you leave, be sure to enter the Rafflecopter giveaway below to win a blu-ray of The Best Exotic Marigold Hotel, so you can catch up with the gang before you see the sequel. To enter, leave a comment and let me know how “love blooms” in your life.

*Disclosure of Material Connection: This is a “sponsored post.” Fox Searchlight Pictures who sponsored it compensated me via a cash payment to write it. Regardless, I only recommend products or services I use personally and believe will be good for my readers.