Honoring the 100th Anniversary of Women’s Right to Vote 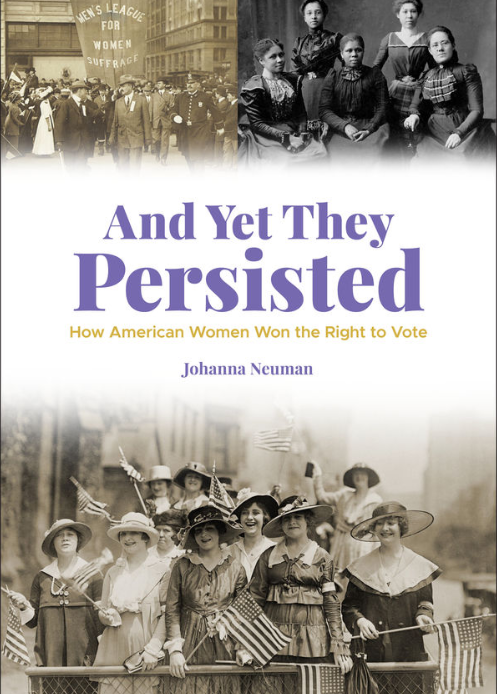 Since March is Women’s History Month and this year marks the one hundredth anniversary of the ratification of the 19th Amendment granting women the right to vote, I thought it was fitting to highlight a new book about the subject and its author.

Telling the stories behind the women’s suffrage movement

The book,  And Yet They Persisted, written by Dr. Johanna Neuman, documents the struggles of women to vote and the unknown stories behind the women’s suffrage movement. Hearing the stories of the suffragists battles, is a reminder to never take our right to vote lightly and to make sure each of us votes and encourages all women to vote. 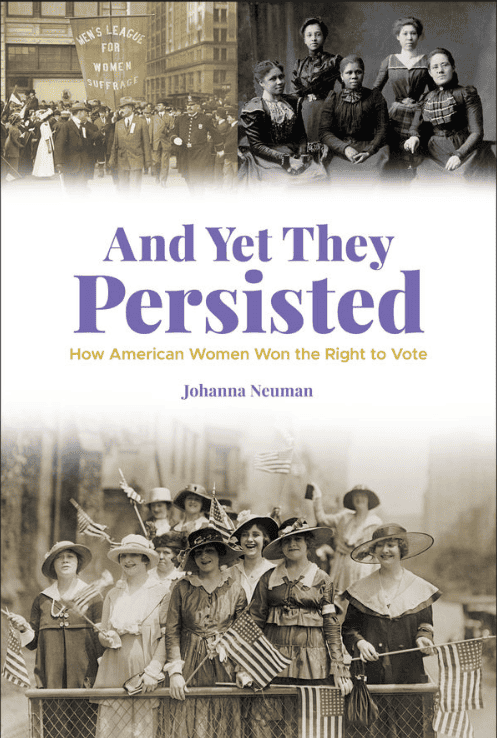 It’s nice to know that today women are the most active participants in American elections, and that especially goes for baby boomer women. According to a new AARP poll, 95 percent of older women plan to cast a ballot in November,” making it such that “the path to victory for candidates in the 2020 elections will run through women age 50 and older.”  (Go boomer girls go! Whoever says females don’t count after 50 is so wrong!) 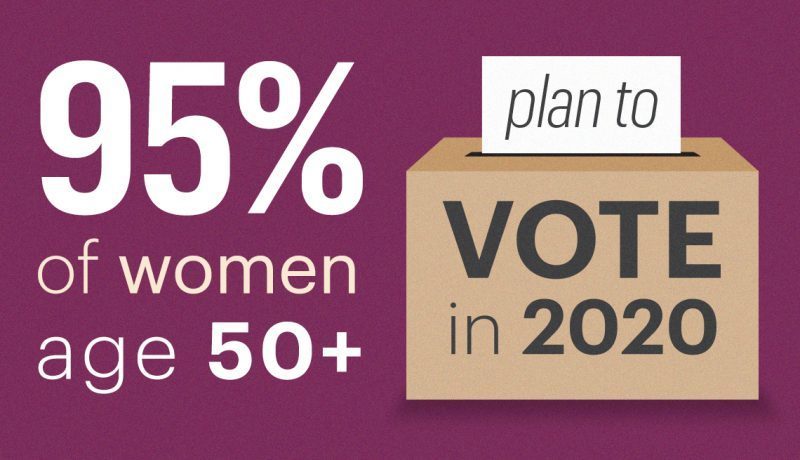 A leading expert on the history of women’s suffrage

Now that you know what a difference women can make in our democracy, I hope you’ll take time to read my interview with Dr. Johanna Neuman, one of the nation’s leading experts on the history of women’s suffrage. In addition to authoring two books on the subject,  Johanna is an award-winning historian and a scholar in residence at American University.

Her previous work is quite impressive as a journalist who covered the White House, State Department and Congress for USA Today and the Los Angeles Times. She won a Nieman Fellowship at Harvard University and served as president of the White House Correspondents Association. After her journalism career, she returned to the academe, earning a PhD in history from American University in 2016. 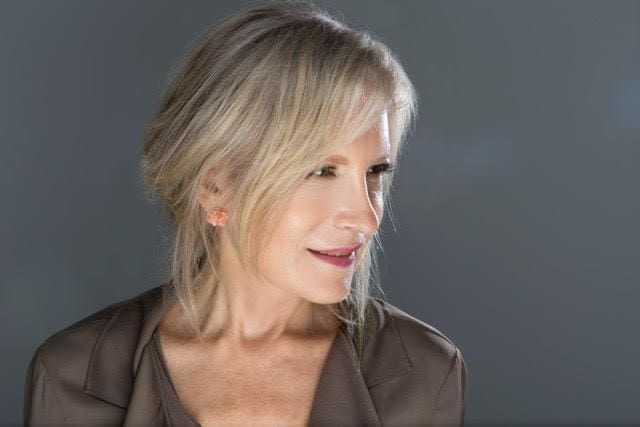 Tell me about the origins of women and the right to vote.

For me, this history begins with Abigail Adams. In 1776, her husband went off to the Second Continental Congress to help write the Articles of Confederation that would bind the thirteen colonies together during the Revolutionary War. She wrote him a letter, asking that when writing the new code of laws for this new nation, he “Remember the Ladies.” She added, “If particular care and attention is not paid to the Ladies, we are determined to foment a Rebellion, and will not hold ourselves bound by any Laws in which we have no voice, or Representation.”

John Adams, who would become the second president of the United States, wrote back saying, “As to your extraordinary Code of Laws, I cannot but laugh. … Depend upon it, we know better than to repeal our Masculine systems.” When I look back over the long history of the struggle by women for voting rights over the next two centuries, I think of Abigail Adams, predicting a rebellion.

What is the real story behind the struggles of women’s right to vote?

First is the nature of politics. No one cedes power until it is in their political advantage to do so. Women won the vote only after the men who controlled politics saw it as in their interests to share the podium. And the second is the utter grit and persistence it takes to make social change. More on that below. 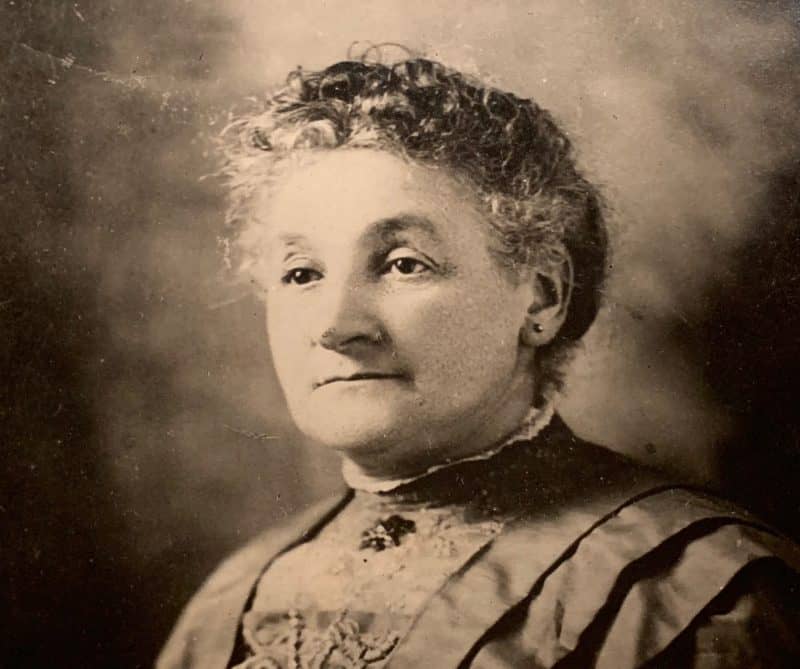 My maternal great-grandmother, Rosalie Vogel, was 66 when she won the right to vote

What about African American women and the right to vote?

From the beginning, African American women have had a special understanding of the potency of the ballot. After the Civil War, Congress enacted the 14th Amendment that extended voting privileges to African American men. Afterward, in 1872, black women showed up at the polls. They told observers they were there to keep their men straight. Straight in those days meant voting for the party of Lincoln, and not the party of slavery. It was almost as if they saw the vote as a community asset, one they shared with their male relatives.

Later, in the face of snubs by white suffrage leaders, black suffragists were fierce. At the massive suffrage parade in Washington, D.C., Ida B. Wells, an activist from Chicago, defied leaders of the Illinois delegation who did not want her to march under their banner. She waited on the sidewalk under the Illinois delegation came into view, and then slipped in between two friends and marched with them.

Anyone can search for their personal links to women’s voting rights history for free by visiting www.ancestry.com/MakeThemCount throughout 2020. @ancestry #WomensHistoryMonth

If you flash forward to the civil rights era, you meet the most incredible activists for the vote. African American women in the Deep South were technically enfranchised by the 19th Amendment in 1920 but for decades had been barred from the ballot by local Jim Crow laws that imposed literacy tests, poll taxes and the very real specter of violence. In the 1960s, they rose up, and fueled the movement that led to the Voting Rights Act of 1965.

Fanny Lou Hamer, a poor sharecropper in ill health and with little education, rose up at the age of 44 in 1962. She went to the county courthouse in Indianola, Mississippi, to register to vote. For this she was forced out of her home and job, menaced by drive-by shooters, and beaten by jailers in a sexualized attack so severely that she was in pain for the rest of her life. When her boss, owner of the Marlow Plantation, told her that he didn’t want any political activism from her, she said, “Mr. Marlow, I didn’t go down there to register for you. I went down there to register for me.”

How can women get involved in their local and national races?

One of the under-covered aspects of this history, in my view, is the role of the states. Like many issues in our times – gay marital equality or medical marijuana – the impetus for change began in the states.

Wyoming was the first, enfranchising its female population in 1890. Three years later, Colorado followed suit, then Utah, Idaho and the state of Washington. In 1911, California enfranchised women on a ballot initiative. It was a squeaker of—the measure passed by one vote per precinct – but the effect was dramatic.

By 1912, 1.2 million American women were eligible to vote for president of the United States. The states kept going. By 1916, analysts said Woodrow Wilson would not have been re-elected without the votes of the suffrage states. In 1917 New York joined in, and that was a game-changer, as New York had the largest delegation in Congress, and those lawmakers were suddenly in the pro-suffrage camp.

By the time Congress passed the 19th Amendment in 1919, 30 of the country’s 48 states had already granted the vote to women. When people ask me how to get involved in politics, I think about that old aphorism that if you want to change the world, start in your neighborhood. And sometimes, it begins by just showing up. 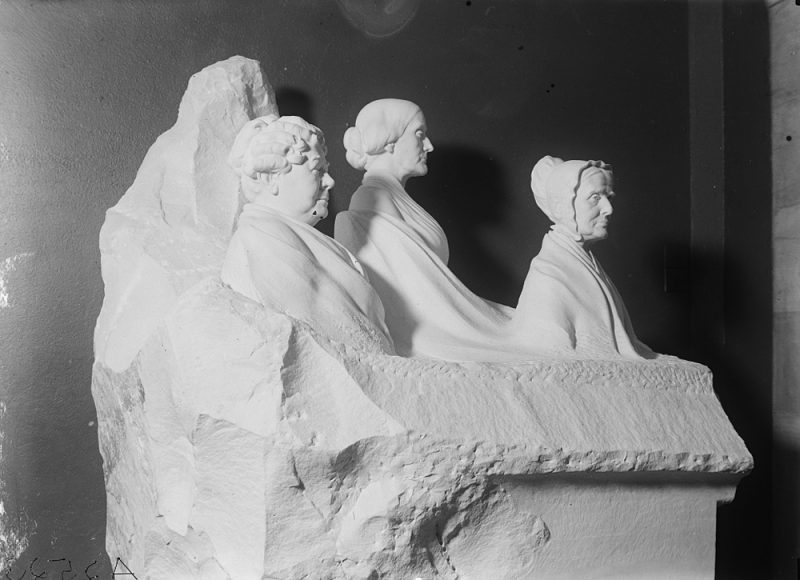 Portrait Monument to leaders of the women’s suffrage movement Lucretia Mott, Elizabeth Cady Stanton and Susan B. Anthony stands in the Capitol Rotunda (Courtesy of Library of Congress, Harris & Ewing)

What can women learn from the suffragettes that we can put into practice to make things better for women today?

After the 19th Amendment was ratified by 36 states and embedded into the Constitution, Carrie Chapman Catt, leader of the mainstream suffrage organization, looked back with a sigh. She recalled how long it took to “get the word male out of the constitution.” She talked about how women were forced to conduct 56 appeals to male voters to enact suffrage ballot initiatives, 47 campaigns for state constitutional conventions, 277 state political party conventions, 30 appeals to national political parties and “19 successive campaigns with 19 successive Congresses.” You can almost hear her moan.

To me the great lesson in this history is that failure is intrinsic to victory. All that those efforts that resulted in defeat or disappointment set the stage for the ultimate win. If there is any cause you believe in today, on either side of the political divide, then follow their example – get up from defeat and keep going, persist. 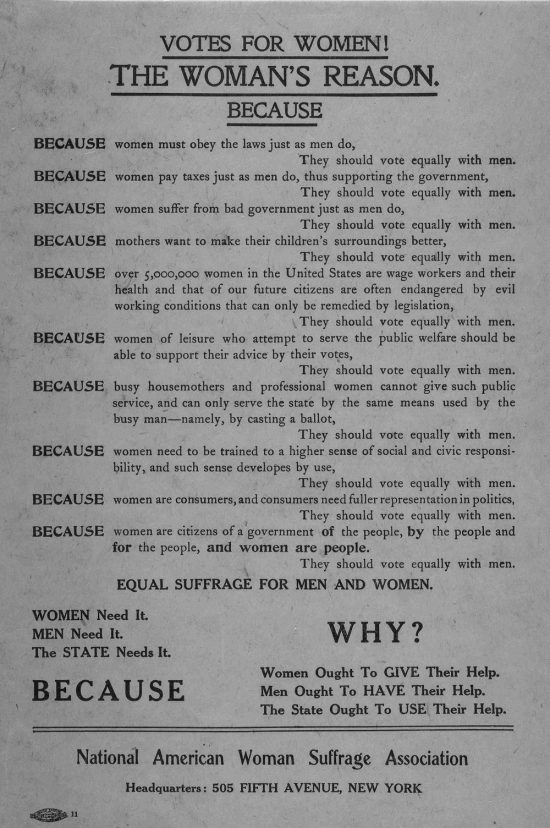 What do you think the suffragettes would think of where women are today in our political world?

I think many of them would be thrilled at the numbers of women in politics and in political causes, others would be surprised that we have not made more progress, and all of them would marvel that female candidates are competitive at the highest levels.

Sometimes I am asked why this country has not yet had a female president, when so many other countries have. I don’t have a ready answer for this. But I believe we will someday, and when we do, she will have what successful male presidents have had: a certain charisma, the ability to lead, and to see above the fray of dissension to progress.

Thanks Dr. Neuman for your amazing insights on women and the right to vote.

Ancestry® Invites Everyone to Find Their Personal Place in Suffrage History

To honor the trailblazers who came before us and recognize the importance of voter equality — Ancestry® is shining a light on the many people and moments that shaped women’s suffrage and the ratification of the 19th Amendment. 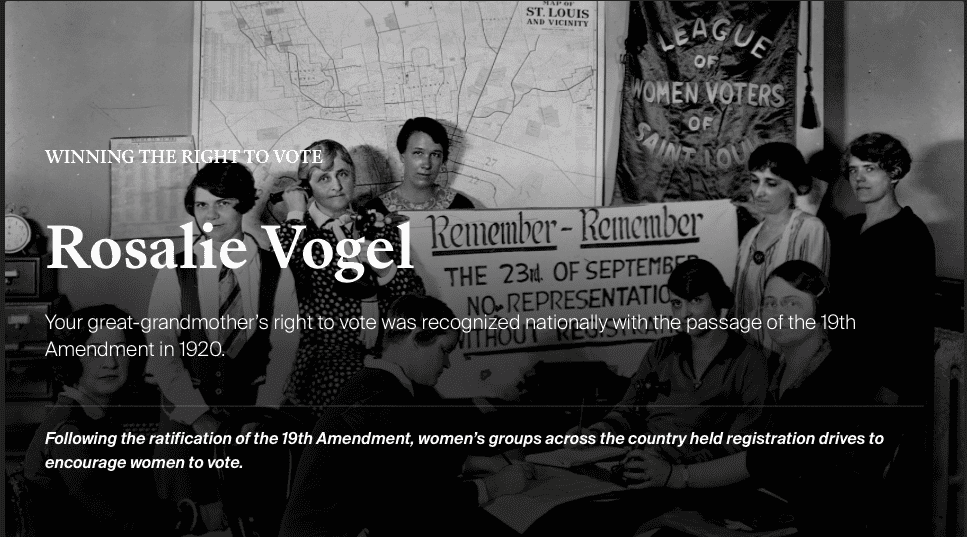 My great-grandmother was one of the women to be recognized nationally with the right to vote in 1920 (Source: Photo by Library of Congress/Corbis/VCG via Getty Images)

This August 26, 2020, marks the centennial of the ratification of the 19th Amendment, which removed discrimination in voting “on account of sex” and ultimately granted many women the right to vote for the first time on a national stage. Ancestry® hopes to elevate the stories of the generations of women who carried the torch, and to connect today’s voters with those who cast the first votes (or in some cases may not have been able to at all).

Anyone can search for their personal links to women’s voting rights history for free by visiting www.ancestry.com/MakeThemCount throughout 2020. Note: Scroll down to the bottom of the page to search your personal history.

“Important historic milestones remind us of where we’ve been but also where we’re going,” said Jennifer Utley, Director of Research at Ancestry. “Learning our ancestors’ stories gives them power. If you think about it, it’s very possible your great-great grandmother couldn’t vote. You can, and it’s because of the women who fought for your rights. Celebrating their grit, tenacity, and humanity, makes them count.”

Go check out your great-grandmother and LMK what you find out.