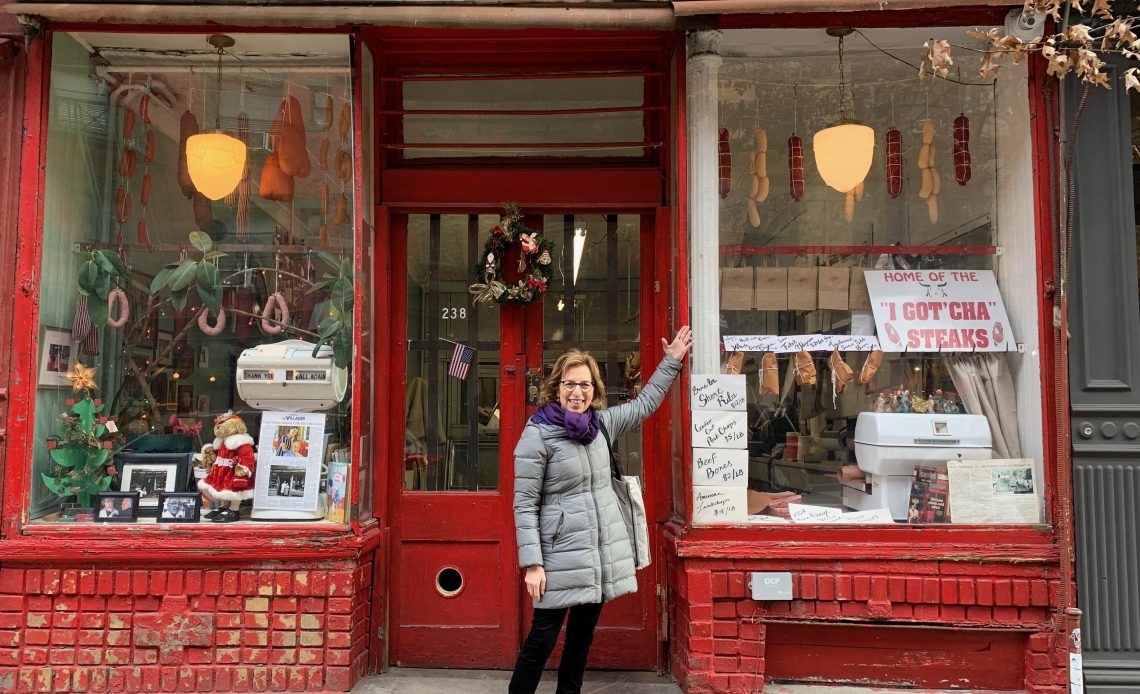 Despite 20 degree weather last Saturday, my daughter A and I ventured out into the cold to go on the new “Mrs. Maisel’s Marvelous Tour of New York City,” along with other adoring fans of the acclaimed Amazon series, “The Marvelous Mrs. Maisel.” Our 2.5 hour tour was compliments of On Location Tours, a company that leads movie and television tours in New York and Boston.*

“What the bus left without us?” we said to the On Location customer service phone rep as we waited to find out how that was possible. “You told us to wait in front of the CUNY Building on 34th Street,” we replied along with two other equally frustrated female boomers T and A — who are Maisel fans and were waiting alongside us. “It was that big white bus across the street and it left at noon. It’s headed down to East 18th Street for the first stop. It will wait for you,” said the rep. 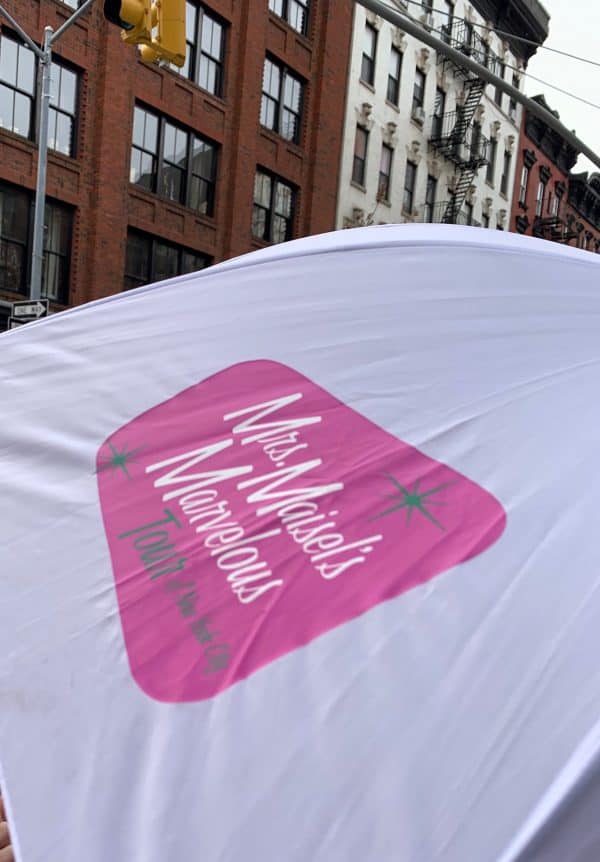 Mrs. Maisel fans will adore this On Location Tour

“Let’s hop in a cab and head to the first stop,” we agreed. Ten minutes later we were in front of the Old Town Bar. There was no bus to be found and the bartenders weren’t aware of any tour. Oye, once again we were on the phone, only this time our voices louder. “The bus isn’t here and now we’re really angry,” we told the rep. He assured us that the bus was stuck in holiday traffic and would be there soon. A and I were ready to call it a day and head over to the new Nordstrom’s on 57th Street, just like Midge Maisel would do if she was with us.

“Here comes the bus,” we yelled as we saw the big white bus pull around the corner. Out came our guide Stephanie and about a dozen other Maisel fans. “I’m so sorry,” said Stephanie, who is a comedic actress and drew a resemblance to Midge in her 1950s attire. “This is a new tour and we’re getting out all the kinks.” Filled with Jewish guilt like the Maisel characters, she promised we didn’t miss much and would make it up to us. Being a yogi I was ready to forgive and even more so ready to get inside a warm bus. 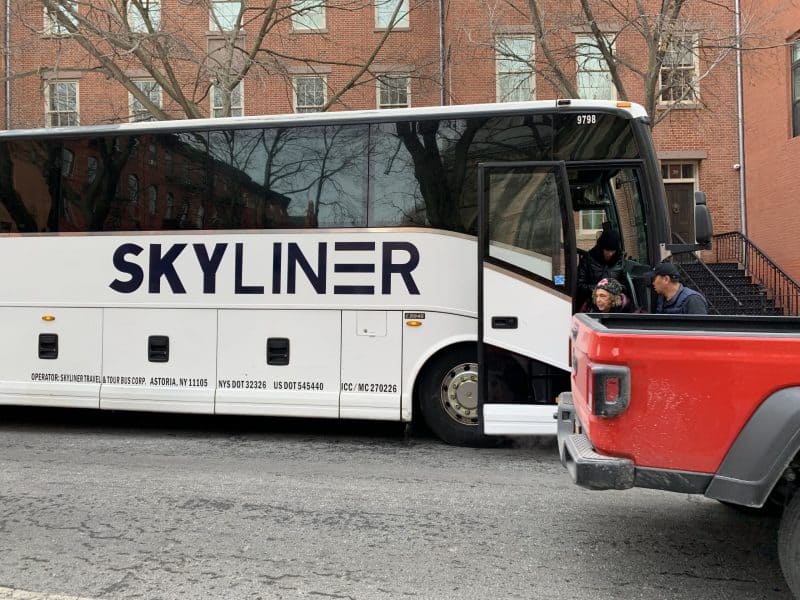 This is the On Location Tours bus to look for

You owe my daughter a date with Joel

However, we (my fellow boomers T and A and I) told Stephanie that to make it up to us she owed my daughter A a date with the very cute 40 year old actor Michael Zegan who plays Midge’s husband Joel. “I know for a fact that he lives in Greenwich Village and is single,” I told Stephanie. She was sure it wasn’t part of the package, but told us that many fans either “love Joel” or “dislike Joel” because of what he did to Midge in season 1. (Note I will try not to give spoilers for those who haven’t watched the show yet.) 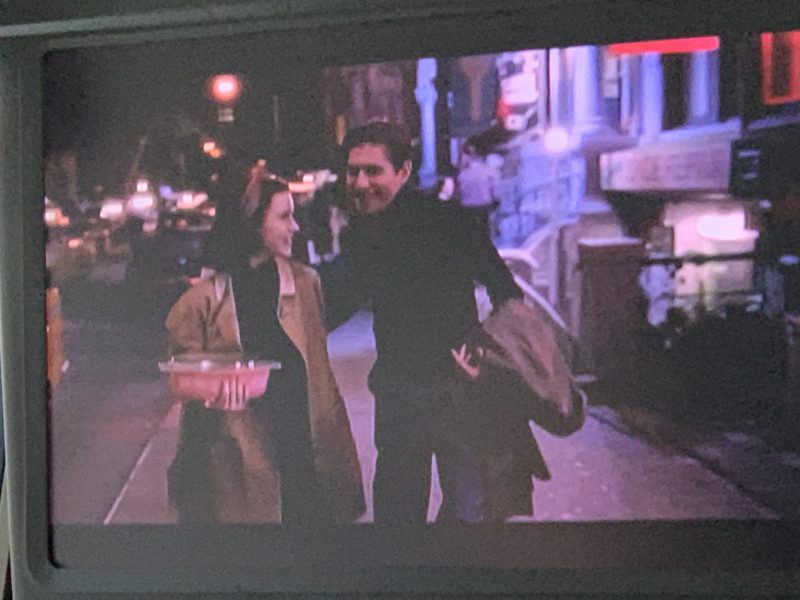 Before we start the tour, for those of you who don’t watch the show, here’s a quick summary from On Location: “At the start of the series, Mrs. Miriam “Midge” Maisel (Rachel Brosnahan) lives in the Upper East Side with her husband Joel (Michael Zegan) and two kids. As the series progresses, her life gets upended by her decision to pursue stand-up comedy, as she starts to explore downtown and performing in the West Village.

Midge lives in the same building as her parents Abe and Rose Weissman, played by Marin Hinkle and Tony Shalhoub. She also meets Susie Myerson (Alex Borstein) at the Gaslight Café, who eventually becomes her manager as the two navigate a male dominated industry.” 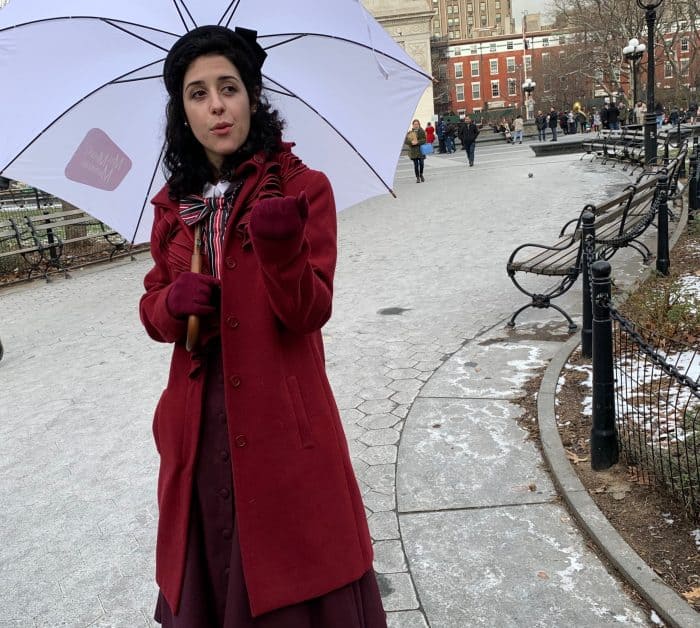 We took pictures at the Old Town Bar, which has been around since 1892. It’s the spot where Joel and his friend Archie meet up for drinks. From there we drove to the Village, while Stephanie shared all the insider secrets about filming a period television series. “They filmed on the Upper West Side of Manhattan for the first season in a real apartment. Then they built an apartment set in Brooklyn where they now film most of the show.

In the Village, we stopped at McSorley’s Old Ale House, the oldest Irish bar in NYC. The bar is a big tourist attraction and had a line out the door. “They were one of the last bars to allow women in,” said Stephanie. Click, click went my camera as I took a few shots in front of the bar. 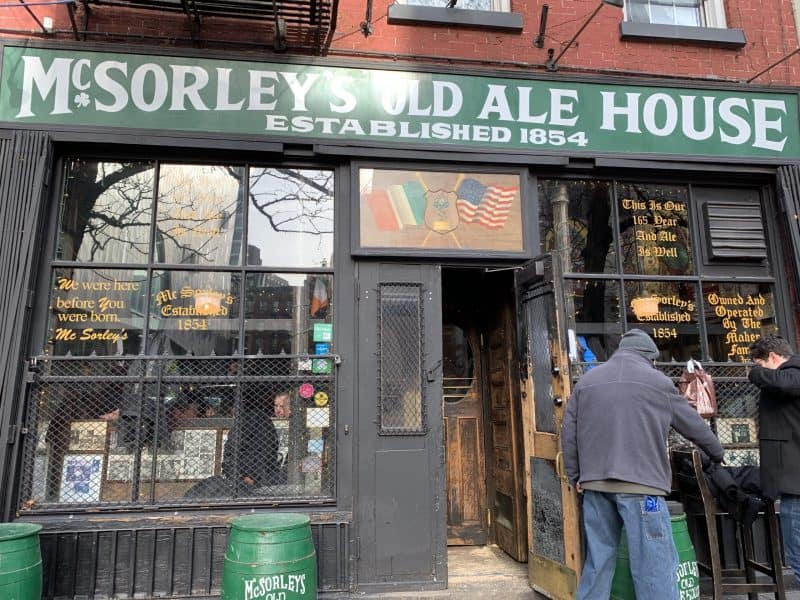 From beer to butchering

We left the red-nosed tourists waiting for their beer and drove further south to one of Stephanie’s “favorite locations on the tour.” It’s the butcher shop near Prince Street where Midge and her mom buy meats and black and white cookies for the Jewish holidays. “It’s the shop where they say the famous quote, “We got the rabbi!” “It’s a real butcher shop and Moe the butcher is a real person,” said Stephanie. And guess what? It was open and Moe was there. Click, click went my camera as I got in position outside the butcher shop entrance to reenact my own rabbi moment. 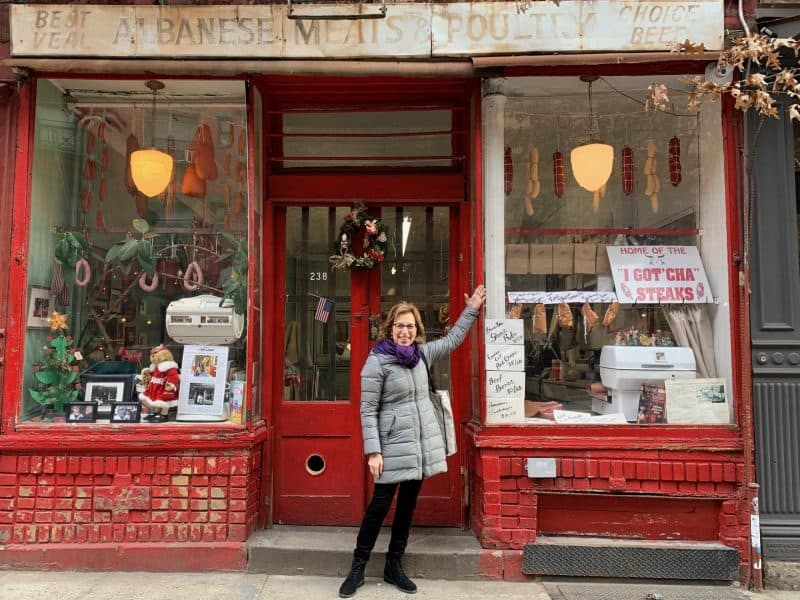 Of course you can’t have a Maisel tour without talking about the marvelous clothes that Midge and Rose wear each season. “Absolutely,” said Stephanie. She informed us that most of the elaborate fashions, except for Midge’s wardrobe which is custom made to spec, are authentic 1950s outfits and accessories sourced from throughout the USA and Canada. “Hats are something special from Rose Harper, the Scarsdale hat keeper’s estate,” said Stephanie. “She was a public relations person during the 50s and 60s. Her nephews kept her hats and donated them to the show.” 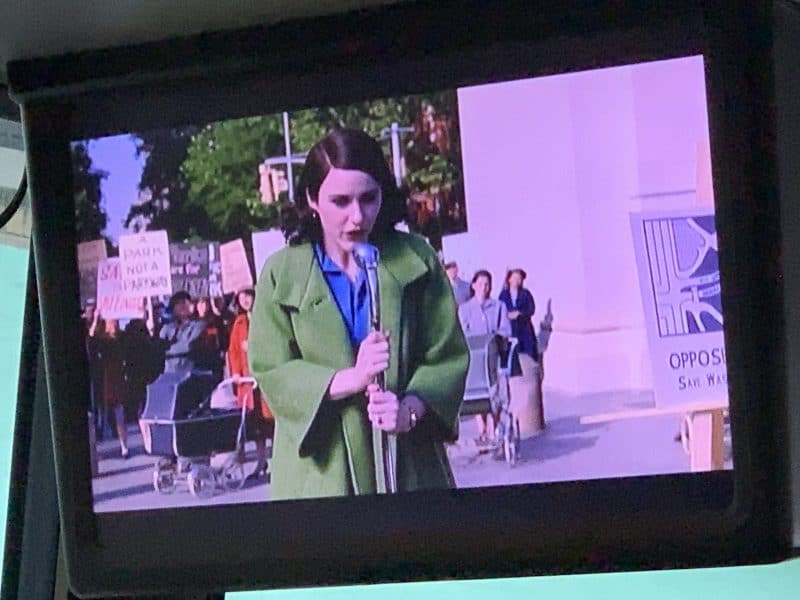 We peeked into Washington Square Park where Midge joined a protest to rally Jane Jacobs Way. Next we walked down what was once known as comedy alley, passing the original Gaslight Cafe entrance where Midge performs and where she meets and becomes friends with manager Susie. Click, click went my camera as I shot a pic of the old steps that once led to a mecca of comedy.

Across the street we visited Caffe Reggio, from the scene where Abe meets his lawyer. With a few minutes to spare some of our tour mates went inside to warm up with a cup of coffee from what is supposed to be the first cappuccino machine brought over from Italy. Stephanie also noted that the fan in the cafe is from the movie Casablanca. 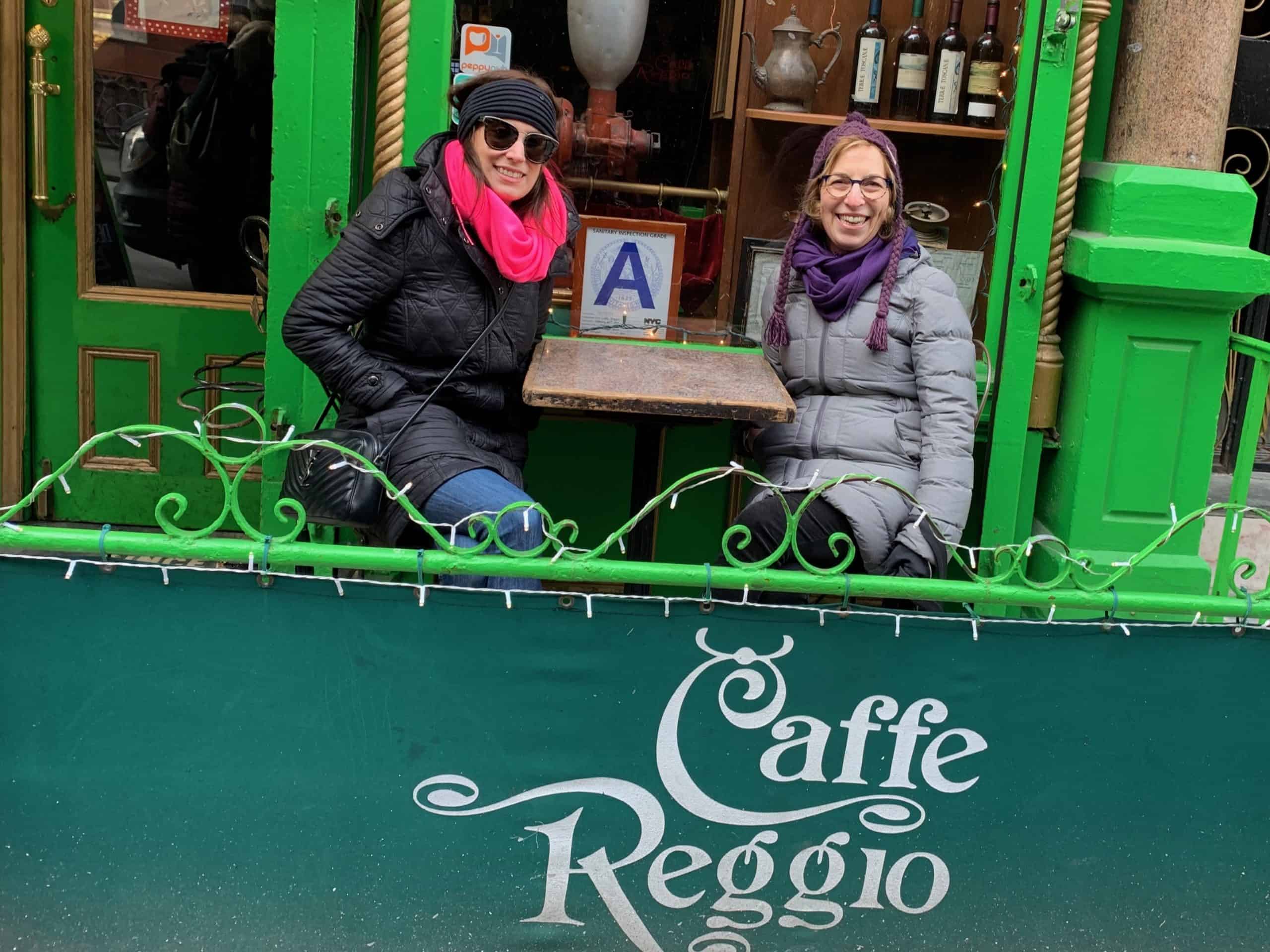 My daughter A and I outside Caffe Reggio

A tasty and tuneful ending to our tour

Our next to last stop took us to Music Inn, one of the oldest record stores in the city. It’s the store where Midge gets the old “dirty” comedy records to listen to. The shop was filled with used LPs, musical instruments, cassettes and CDs. “Look at this Beatles album,” said a millennial tour mate. “I have that original album at home,” I told her. She was surprised and likely thought I was joking. “No I really do!” I assured her. I felt quite ancient. Click, click, off went my camera. 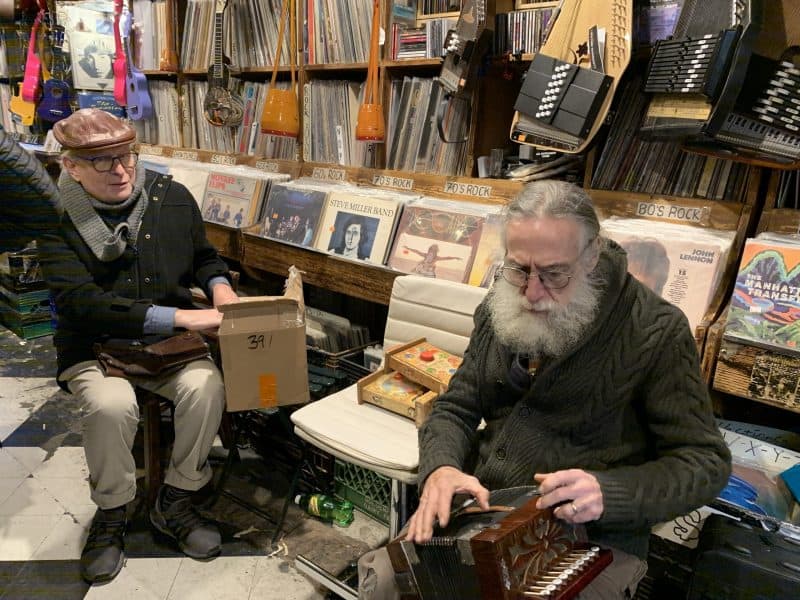 Spoiler alert! We ended at The City Spoon Diner where Joel proposes to Midge in season 2.  In real life it is La Bonbonniere an old-fashioned diner that only takes cash. If you want to eat there you’ll have to go to the ATM to get some dollars – remember those bills from the 1950s before credit cards existed?

“This is my other favorite location on the tour,” said Stephanie. We gave gratuities upon exiting and received our token black and white cookies. “You two get a few more cookies for your earlier woes,” said Stephanie. “Again we are so sorry for our mistake with the meeting location.” 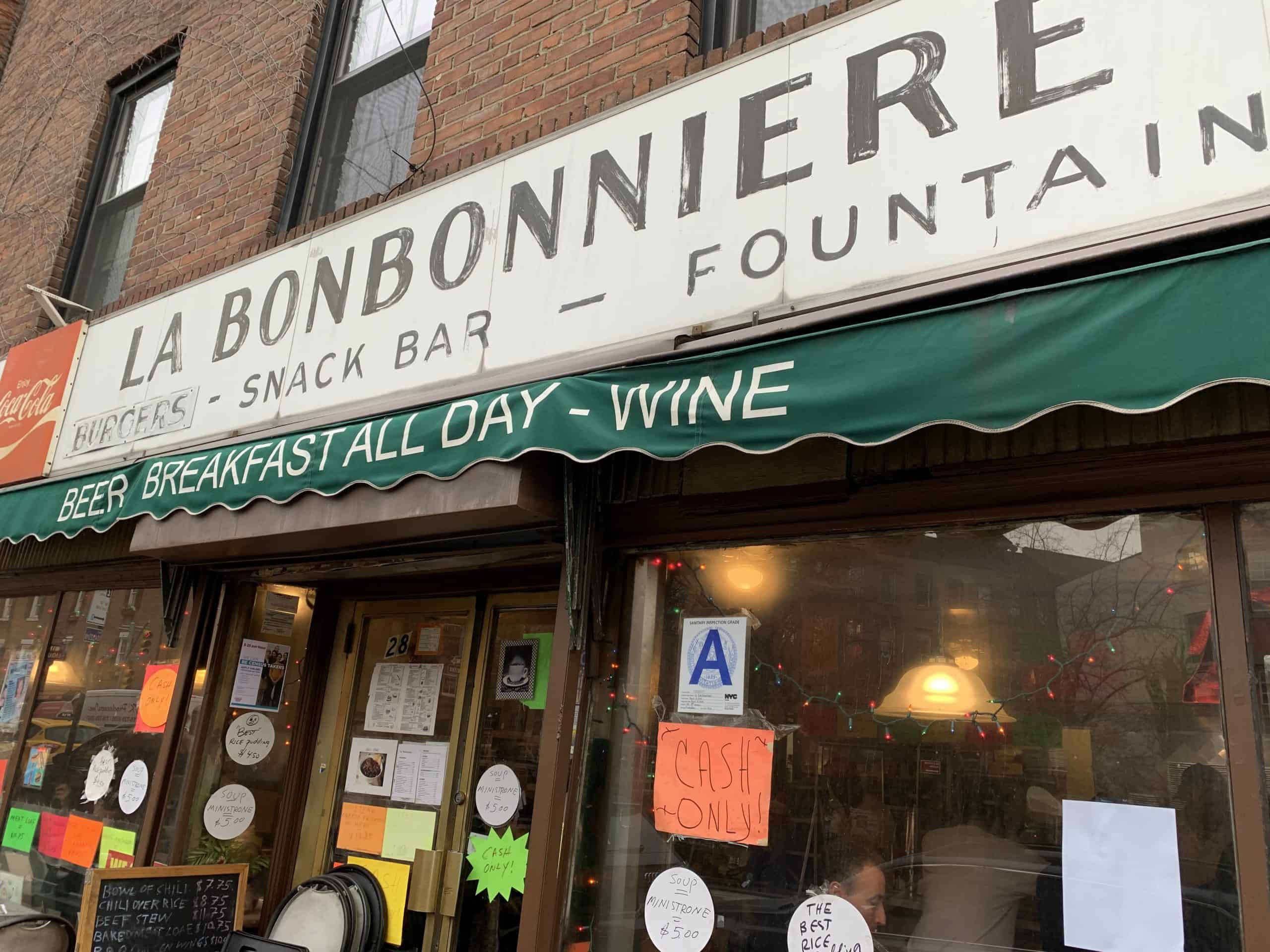 La BonBonniere is The City Spoon Diner on the show

All in all, Stephanie did a great job and the tour was fun. It would be even more enjoyable on a warm sunny day. If you would like to book this tour or other television and movie tours with On Location you can check out their website.

Just make sure if you go on a tour that if you see a large white bus nearby your meeting place to cross the street. And if you miss the bus, take the subway uptown to Broadway and 57th Street and go shopping at the new Nordstrom’s NYC. There are seven restaurants in the store plus a bar in the shoe department. It’s simply marvelous, just like “The Marvelous Mrs. Maisel.”

*Disclosure of Material Connection: On Location Tours provided me with a complimentary tour of NYC. Regardless, I only recommend products or services I use personally and believe will be good for my readers.