Back From The Blogosphere – BlogHer’14 Recap 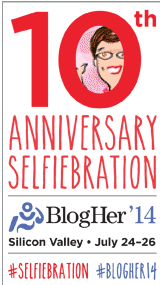 I’m back from the blogosphere where I met, mingled and immersed myself among the large community of female (and a few male) bloggers at the BlogHer’14 Conference in San Jose, CA. It’s a bit like going into the clouds and not coming out for two days.

Celebrating 10 Years
This year was BlogHer’s 10th anniversary and the big news was “how times have changed in the past decade.” The blogosphere is much more crowded than it was in 2004. Some feel that blogging is here to stay, while others believe that social media, or micro-blogging  (Facebook and Twitter), visual (Pinterest and Instagram) and vlogging (Vine and Snapchat) are becoming more popular. If you’re a blogger or thinking about becoming a blogger, know that your social media profile is equally, if not more important, than your blog. 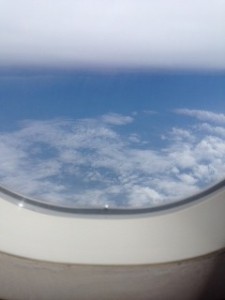 Traveling to the blogosphere is like going into the clouds.

My Flight Into the Blogosphere
My trip to San Jose was a fun one. On my connector flight from Phoenix, I sat next to a newbie mom and her adorable baby. We chatted awhile and then she said, “By the way, my name is Jacqueline Kennedy.” “No kidding,” I said. “I am a big Jackie fan. “And my daughter’s name is Eleanor, after Eleanor Roosevelt,” she added. Wow-o-wow! Lucky me sitting next to my two favorite First Ladies.

Lunch and Namaste
I met Sharon Hodor Greenthal, from Empty House, Full Mind, for lunch to chat about boomer blogging. Sharon is also editor-in-chief of Midlife Boulevard, a collaborative blog for women 50+.

Next it was off to the The Sangria Sundown Soiree sponsored by Soybu yoga clothes and Eppa Sangria. I was disappointed that there was no yoga class to partake in – but it was 90 degrees and way too hot to do any asanas under the sun. The hosts  gave us swag, including a Soybu yoga top. “I’ll take an XS for my petite frame,” I told the woman who was handling out gift bags.

Later that evening, I went back to my room to try on the top. I stretched it over my head and tugged it down my body. The top includes a built-in bra. It was very, very tight. When I tried to get it off, I had lots of trouble pulling it over my head. Thought I might have to call the front desk for a scissor to cut it apart. I took a deep breathe and bent over. Pull, push, lift, whew, finally got it off my chest with my head still intact. Guess I should have asked for a larger size. The tops are rather nice if you order the correct measure.

Day One – Opening Session
The conference began with a rousing video titled “Why I Blog.” (Watch this video, it is wonderful.) Participants shared their reasons, many I could relate to:

Elisa Camahort Page, a founder of BlogHer, told us to “celebrate yourself.” She encouraged the crowd of 2500 bloggers to take selfies. 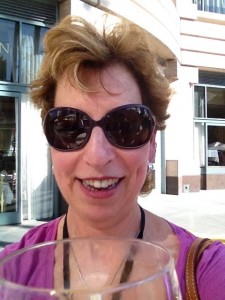 My selfie at The Sangria Soiree Party

“How could you post that terrible picture?” said my daughter A after seeing my selfie on Instagram. I don’t have a lot of followers on the network so I didn’t think anyone would be watching. I was determined to improve my selfiebration and learn how to take a good selfie. Here are some tips:

♥ Hold camera up high at 45 degree angle
♥ Look up but keep chin down, but not too low to avoid a double chin
♥ Keep the light in front of you
♥ Make sure to flip the camera so it is focused on you

10×10 Project
I enjoyed listening to the 10×10 speakers during the general sessions. Ten bloggers were selected to “look back at what the blogosphere built and look ahead to where we’re going.” Each speaker covered 10 years in 10 minutes.

The first two were Danah Boyd, author of It’s Complicated, about the social lives of networked teens, and Shannon Des Roches Rosa, an advocate for helping parents with autistic children. Danah spoke about “how being public forced her to think differently and be held accountable.” She said “there is beauty and pain in being public.” Shannon started blogging “to process her life dealing with her son’s autism.” She no longer has self-pity and has built a community of 87,000 people who are living with the challenges of raising a child with autism.

Have you caught the fever yet? Can you see why this community is amazing?

The morning session closed with Jenny Lawson, from The Bloggess, and best-selling author of Let’s Pretend This Never Happened. Jenny deals with depression and mental illness every day. She said that when she turned 30 she hadn’t accomplished anything she had planned. She told the Houston Chronicle she would write for free and described her first BlogHer conference. “I was a nobody looking at somebody doing a keynote. Maybe I’ll be doing a keynote one day. And now I am. You might be that person, ” she told the audience.

I was so pleased to learn that Jenny took 11 years to write her first book. Will I write a memoir/self-help book one day and be a BlogHer keynote? Will I? Will I? Maybe I will! 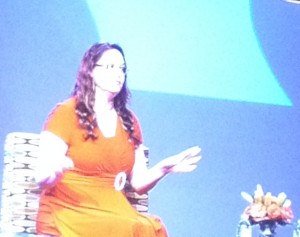 Jenny closed by telling us that comments make a difference. “I keep a folder of 24 emails from women who were planning their suicide due to mental illness,” said Jenny. “They each said that it was not only my blog that helped them but the comments on my posts that reminded them that they are not alone. Your words mean so much more than you could ever know.”

Jenny’s words say it all.

Stay tuned for more updates from BlogHer’14 including:
♥ Highlights from other 10×10 speakers’ remarks
♥ Notes from The Future of The Social Media Web keynote, including Arianna Huffington’s interview with Guy Kawasaki (Note: I’ll be hosting a giveaway for her new book Thrive.)
♥ A review of the new movie, 100 Foot Journey, with Helen Mirren. Boomer girls won’t want to miss this flick in theaters starting August 8. Previewing this movie was one of the best activities at BlogHer’14.