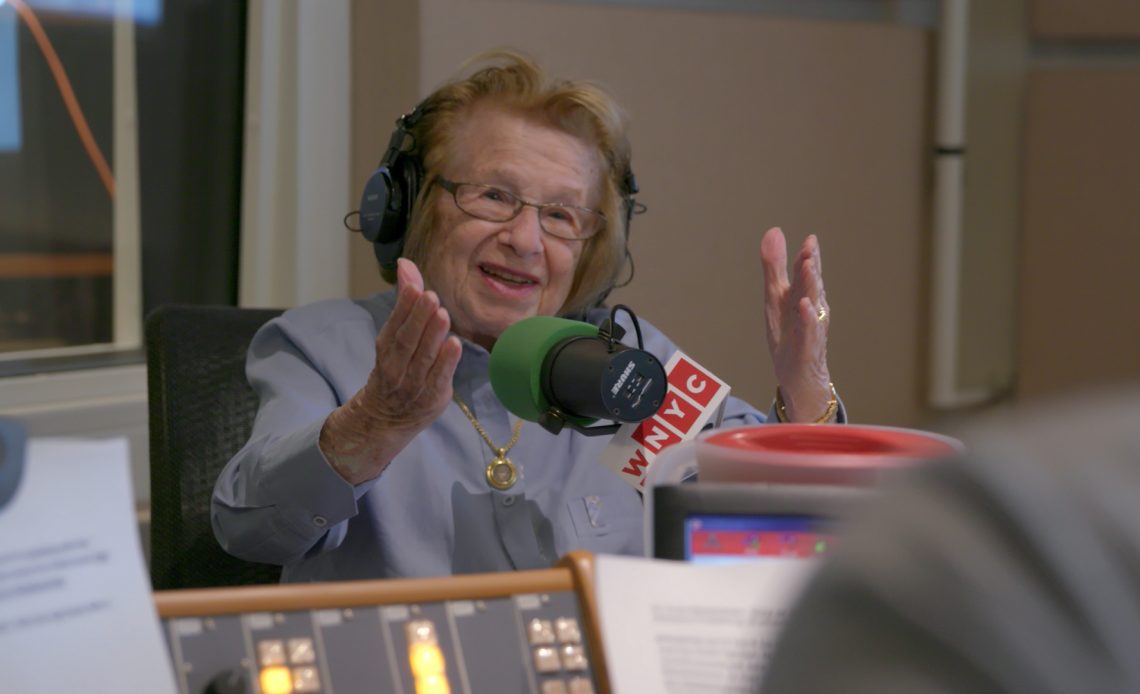 Do you remember Ask Dr. Ruth, the show featuring the diminutive sex therapist Dr. Ruth Westheimer? She went on the air in 1984. That was the year I married my late husband M. Did you listen to her show back then? We did. Remember how she used to answer callers questions about relationships and sex? It was way before the internet and social media when people didn’t really talk openly about sex. At the time, Dr. Ruth was at the forefront of the sexual revolution.

This week, a new documentary premieres in theaters (and on Hulu in June) called ASK DR. RUTH. The film captures Dr. Ruth Westheimer as she approaches her 90th birthday, which happened almost a year ago. It’s hard to believe that this woman is 90 (or almost 91 as of this June). At 4 feet 7 inches, with her memorable thick German accent, she shows no signs of slowing down. She transformed the conversation around sexuality, sex therapy and education more than 35 years ago and continues to help advise and educate today. 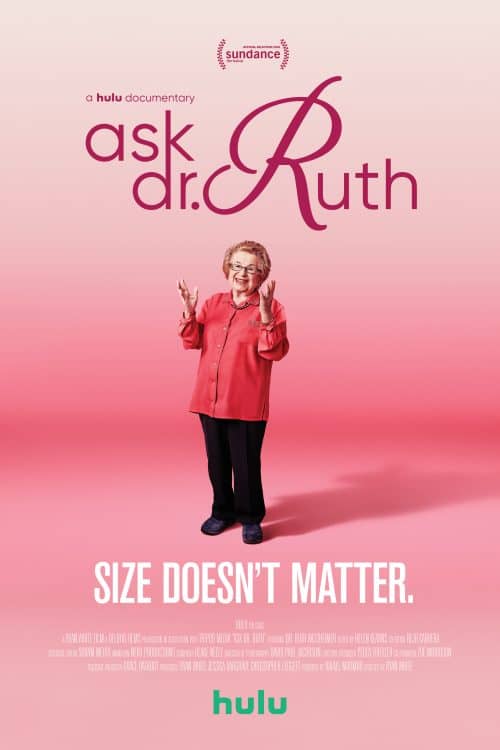 I had a chance to view a screener and enjoyed the film. Dr. Ruth’s storytelling drew me in and the use of historic mementos and flashbacks were engaging. The film revisits Dr. Ruth’s painful past during her early years as a Holocaust survivor and traces her path to a career at the forefront of the sexual revolution. It goes on to show how despite her size or gender, she transforms the conversation around sexuality. (Note: If you cannot see the video below, click ASK DR. RUTH trailer.)

“Am I going to get a boyfriend?” Dr. Ruth asks Alexa at the start of the film. She is full of energy as she walks around her Washington Heights apartment where she has lived for the past 54 years. I hope I am as vibrant as Dr. Ruth when I’m 90.

She has worked with the same PR person, Pierre Lu, for 36 years. He continues to keep her calendar jammed packed with media interviews. Plus she teaches courses at Hunter College and Columbia University and in 2018, she published three books. Always giving advice, she says: “Short people make better lovers.” 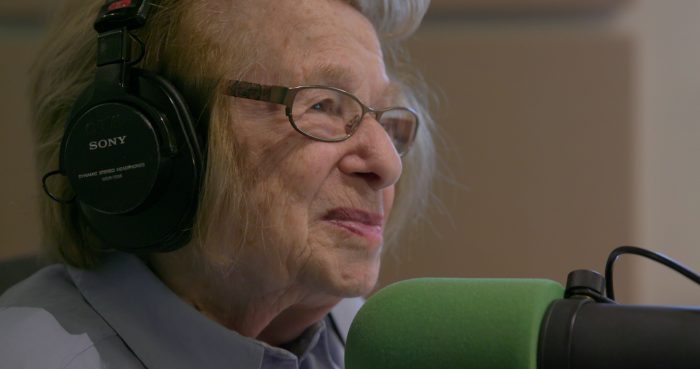 Revisiting a painful past

In the film, Dr. Ruth looks back on her early years. She was born in 1928 near Frankfurt, Germany and was a youngster when the Nazis came into power. As an only child of Orthodox Jews, her parents sent her away at 10 years old via Kindertransport to Switzerland, leaving behind her family during WWII. “My parents gave me life twice,” says Dr. Ruth, “once when I was born, second when I went to Switzerland.”

She along with 50 other Jewish children went to a Swiss orphanage, where they were treated as second class citizens. She kept a diary of her time growing up there and kept every letter her parents wrote — she still has the letters in a binder today. “The letters gave me hope and joy,” she said.

Unfortunately, after some time the letters stopped and she knew something was wrong. She later learned that her parents had been killed in the Holocaust in 1942, possibly at Auschwitz concentration camp. 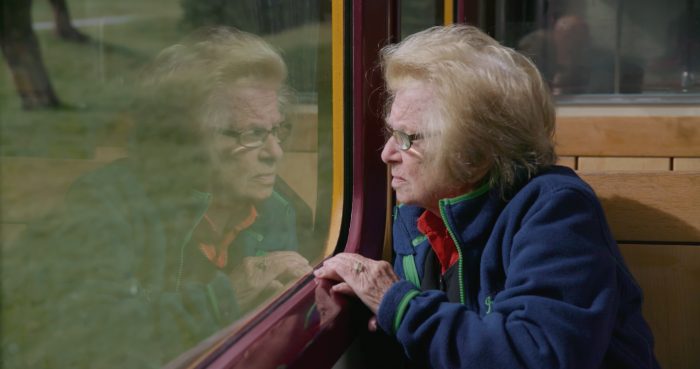 The loves in her life

She met her first boyfriend Walter at the orphanage. Since girls weren’t able to attend school past the 8th grade, he transferred his knowledge and shared his books with her so she could continue learning.

After the war, she left Switzerland with her longtime friend and went on a boat to Palestine to live on a kibbutz. On her 20th birthday she became a sniper in Israel. While there she was wounded almost lost her legs.

She moved to Paris with her first husband David. But when he wanted to return to Israel, she divorced him. She met Ben, husband number two in Paris and they had a daughter Miriam.

In 1956, she came to America by boat, where she had to learn English. Two years later, she separated from Ben and fell in love with her third husband Fred. They had one son Joel and were together for 24 years until he passed away in 1997. “With Fred it was true love,” said Dr. Ruth. 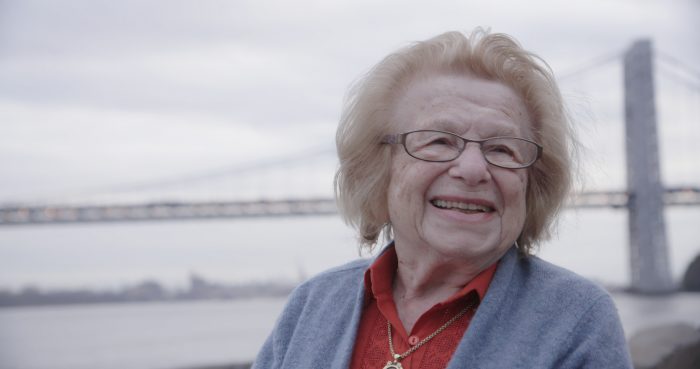 A long and esteemed career

Dr. Ruth was 42 when she got her doctorate in psychology. Her undergraduate work was done at the University of Paris, where she also taught psychology.  In the mid-70s, she studied at Cornell University (my alma mater) to train as a sex therapist.

Everything changed in 1981 when WYNY asked her to come on its radio show and talk about sex. At first the show was recorded. Then it went live on Sunday nights and became a call in show. Dr. Ruth’s career took off as word of mouth spread.

In addition, she became an advocate for Aids education during the height of her popularity and the height of the Aids crisis. Not only did she answer live questions about sex, but she talked about the Aids epidemic and homosexuality. Her hope as she said at the time was to “educate and find a cure.”

She did almost 500 radio shows during her time on the air and became known as the nation’s most popular sex therapist. 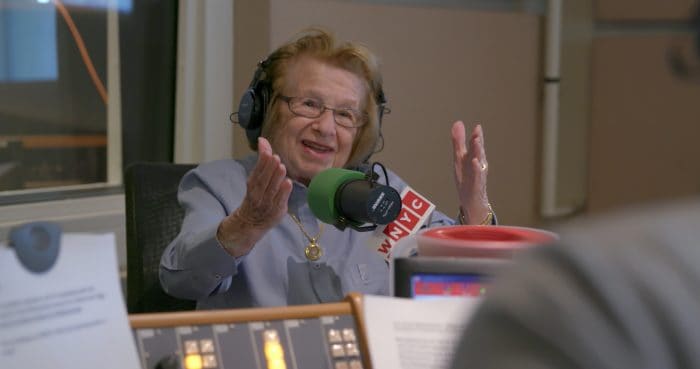 Near the close of the film, it’s nice to see Dr. Ruth’s grandchildren and others honoring her at 90 at the Museum of Jewish Heritage. Their words remind us of the “millions of people who have taken her advice and what an impact she has had.”

When asked about her life, she said, “Seventy years ago, I was wounded and almost lost my legs. Eighty years ago I left Frankfurt. If I were to talk to that girl now despite the tragic events I’d say ‘look what’s happened in your life.’ I have an obligation to live large and make a dent in this world.”

I owe a bit of thanks to Dr. Ruth. I know I took some of her relationship advice during those early years of marriage. What about you?

As for the new film, ASK DR. RUTH, I give it two thumbs up! If you’re a Dr. Ruth fan like me, go get your tickets!