“Absolutely Fabulous – The Movie” Is Fabulous, Fashionable, and Fun

This post is made possible by support from Fox Searchlight Pictures. All opinions are my own.

The crowd cheered as Jennifer Saunders and Joanna Lumley, the stars of Absolutely Fabulous – The Movie, walked into the Chelsea Bowtie theatre in New York City on Tuesday evening for an advance screening of their new film. Not knowing much about the British series of the same name, I was eager to learn more about their characters Edina and Patsy. Edina runs a PR agency and Patsy is a magazine editor. 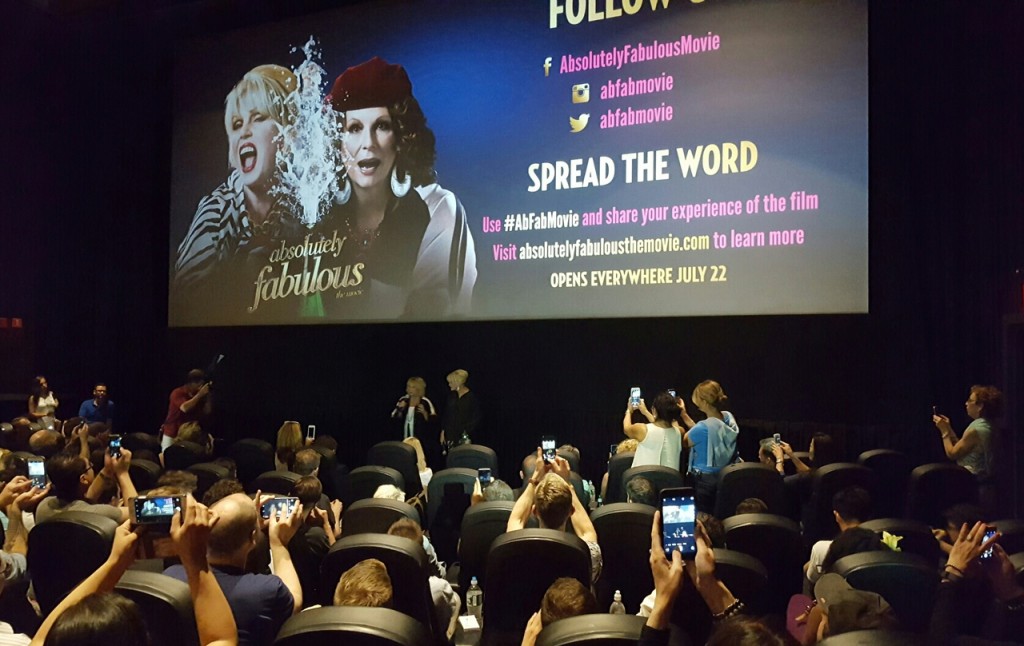 Crowds cheered when “Absolutely Fabulous -The Movie” stars Jennifer Saunders and Joanna Lumley entered the theatre at the screening in NYC.

An Hilarious Twosome
My friend J and I quickly became Edina and Patsy fans, laughing our way through the hilarious twosomes shopping, drinking, clubbing, and escapades around London’s trendiest hotspots. The two are post 60 women with attitude and not afraid to pop themselves with Botox, wear outlandish designer outfits, and say whatever they feel like saying, whenever they feel like saying it. Maybe that’s why I found myself cheering on this dynamic duo for the entire 90 minutes. Having worked in PR for most of my previous career, I could empathize with Edina’s and Patsy’s outrageous behavior to win a prized client or placement.

Edina and Patsy are cohorts and best friends in “Absolutely Fabulous – The Movie.”

A Fabulous, Fashionable, and Fun Movie 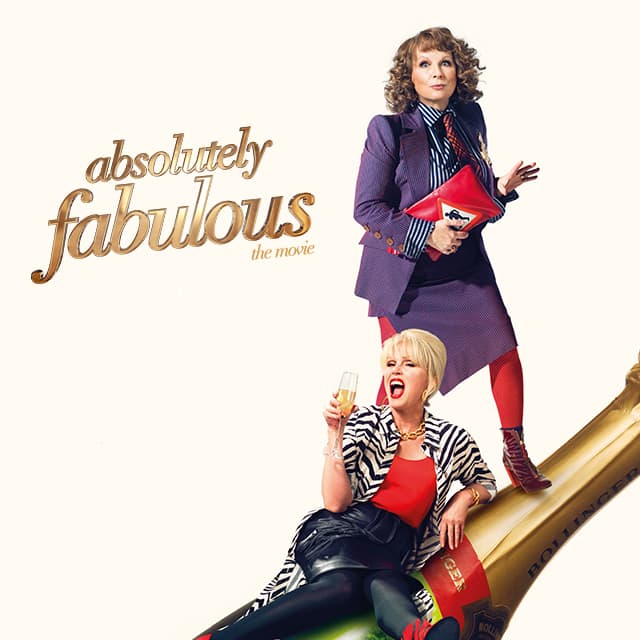 In the movie, Edina and Patsy push their way into an uber fashionable launch party to gain access to model Kate Moss as a potential PR client. When Edina happens to push Kate into the river and potentially kill her, all hell breaks loose and they are relentlessly pursued by the media and paparazzi. Penniless, they escape to the French Riviera, planning a way to make their stay there permanent so they can live the high life forever.

The movie features cameos with a variety of celebrities including Jon Hamm, from Mad Men, models Jerry Hall and Kate Moss, actress Joan Collins, and designer Stella McCartney, plus other noteworthy names.

While Edina and Patsy may not have the most fit figures anymore (yes these stars have middle-aged middles just like the rest of us over 50), fashion and style play a major role in the film. I don’t know how many wardrobe changes they made, but it seemed like every scene brought a new, bigger and better designer outfit. Another reason for boomer fashionistas to love these gals.

Edina and Patsy escape to the French Riviera.

Friendship and Family Play A Central Role
Edina’s family adds to the hilarity — from her 90 year old mom Mrs. M, who also lives her life to the fullest, to her plain and simple daughter Saffy. Although, Saffy has a bi-racial daughter who Saffy calls Jane and Edina calls Lola.  Edina and Patsy bring Lola along on their travels.

Most of all, it’s the friendship that binds these two together through thick and thin. Never staying down in the dumps, Edina and Patsy are optimists. Joanna Lumley said it best when asked in a The New York Times interview about Edina’s moment of truth, about the end of the movie when Edina says, “I know who I am.” and if she really does: “Edina is constantly on the go so that she doesn’t have to stop and think about how she feels. I thought it would be good to have that moment. But as long as Patsy is there to say, “All you need is a nice little drink,” she can go straight back to being fabulous.”

I give it two-thumbs up!