A Visit to ABC Kitchen

“Where do you want to go for your graduation lunch?” I asked my son D a few months before his special day.

And so it was, on a sunny day in May, a little over a week ago, after my son graduated from college, my son D, my daughter A and I enjoyed one of the best-ever celebratory luncheons at this award-winning restaurant. It was farm-to-table dining, casually elegant, with an artful design and exquisite locally sourced food and organically focused cuisine, just as the press release said.

“What are you going to order?” I asked D and A, as we sat down for lunch. We were all famished and hadn’t eaten since the early morning.

“Do you want a drink?” asked the waitress. “We have a wonderful rhubarb bellini and rhubarb martini.” I was sold and so were my table mates. Rhubarb is one of my favorites.  I adore strawberry and rhubarb pie, rhubarb crumble and rhubarb compote, but had never tried a drink made with rhubarb. “Absolutely,” we all chimed in. A ordered the martini and D and I got a bellini. We raised our glasses and made a toast, “To D on his graduation day and to his ongoing career success.” Sip, sip – down they went.

We chose pretzel crusted calamari with marinara and mustard aioli as an appetizer. The calamari were hot and crispy and the tangy sauces were a nice complement for dipping. 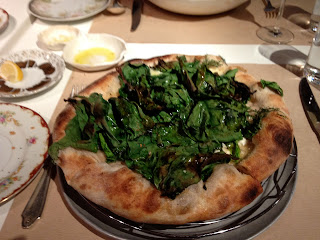 I chose the spinach, goat cheese and herb pizza. The crust was thin and the spinach was delicate and flaky. Ooh it was so good, I ate it all. (I did share a slice or two with D and A. I was a nice mom.)

“How do you make this spinach taste so good,” I asked the waitress. “It’s the brick oven,” she replied. (I attempted to copy this pizza recipe this weekend. I bought goat cheese and fresh spinach and used some herbs that I had brought back from Italy. I spread the dough very thin, basted it with olive oil, sprinkled the fresh goat cheese and spinach over the crust and dotted it with herbs. Then I added a few more drops of olive oil over the top. The pizza turned out pretty good, not as good as ABC, since I don’t have a brick oven. We all agreed that next time I’ll load up on the spinach, since the leaves tend to shrink during baking.) 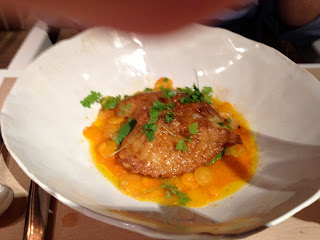 D selected the spice crusted monkfish, pea puree and carrot vinaigrette. It was so flavorful and the fish was tender. Ooh, aah, ooh, aah. We loved the fish. 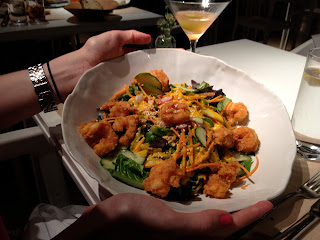 A wanted a salad and decided on the crispy shrimp, romaine, market vegetables and carrot-sesame vinaigrette. The carrot-sesame dressing was so light and tasty, definitely wish they could bottle that dressing for home use. Or, maybe, ABC will decide to produce a cookbook one day, maybe, maybe.

Did we leave room for dessert? Did we? Did we? You guessed right. Of course, we did.

“What do you recommend for dessert?” we asked the waitress.

“You have to try the sundae. It is amazing,” she answered with a grin.

OMG! OMG! OMG! Food coma was about to set in when they brought out the sundae. Listen to what was in this big bowl. I could not believe it was so large. There were three scoops of salted caramel ice cream. (One scoop for each of us, how nice ABC was to give us three scoops.) The ice cream was sitting on chocolate sauce and topped with candied peanuts, caramel popcorn and whipped cream. (Did you get all that, I said three scoops with peanuts, chocolate sauce and caramel popcorn. Do I need to repeat it again? This is definitely one to imitate at home. I would go back to ABC just for this dessert.)

Yes, we finished every last spoonful of the sundae. We left a few cookie morsels on the plate. I paid the bill. And we all agreed that ABC Kitchen is worth waiting on the waiting list for a table. It is truly one of the best…James Beard was right. Hope you’ll remember the first letters of the alphabet and pay ABC Kitchen a visit next time you are in NYC.

“Who is graduating next?” I asked A and D. “We’re done with school for a while mom,” they both quickly replied. “We’re done for now.”

“Well okay then, I’m so proud of you two kids. Yes, I’m very proud. But, we’ll have to go back for my birthday next year. And maybe since you are both working now, you’ll treat your mama to a nice birthday lunch at ABC Kitchen. Okay? I love you two so much. Okay? Do you know what day my birthday is? Should we make the reservations now? Soon? Okay? I love you two so much. As much as a three scoop salted caramel ice cream sundae with chocolate sauce, and candied peanuts and caramel popcorn and whipped cream. And that’s really big.”