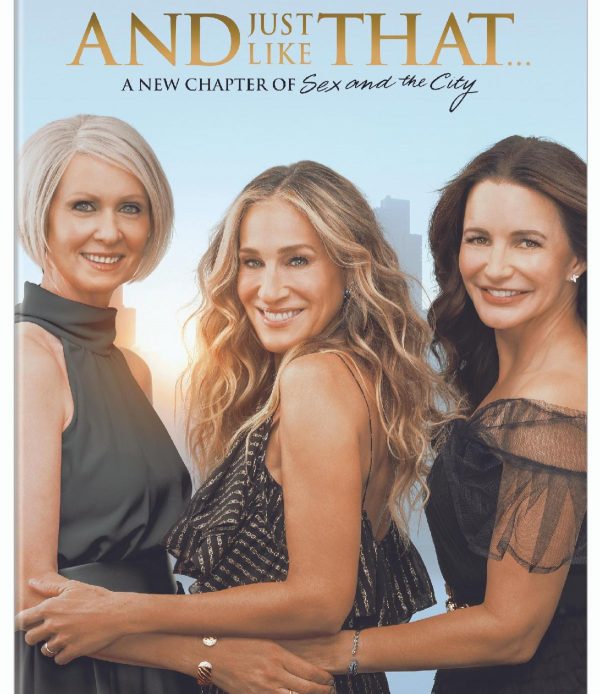 This week And Just Like That…The Complete First Season of the new chapter of the HBO series Sex and the City comes out on DVD. And guess what? Your’s truly, yes moi, has received a copy from my friends at Warner Bros. Home Entertainment. Better yet, since I’ve already seen every HBO Max episode (some twice), I’m hosting a special giveaway to share it out.

I was a big fan of Sex and the City when it premiered in 1998. I couldn’t wait for each weekly episode on HBO to see the adventures of Carrie, Samantha, Miranda and Charlotte — all single in New York City. True friendship ran deep among the foursome. Their escapades outlandish, their fashions big trendsetters, and their many boyfriends — each one cuter than the next. I loved it all and was disheartened when the six seasons came to an end in 2004. I still watch some of the episodes on syndication whenever I have a chance. Plus, I’ve seen both feature films Sex and the City and Sex and the City 2.

Still sexy after all these years

Last year, I was excited when I heard that there was going to be a reboot of the show. And Just Like That… is an all-new series with iconic characters Carrie (Sarah Jessica Parker), Miranda (Cynthia Nixon) and Charlotte (Kristin Davis). Kim Cattrall didn’t return so there’s no Samantha – boo hoo.

I have to admit that I wasn’t that enthralled with the first episode. But by the second I was all in. By the 10th episode I was sad that it was the finale. The fashions were just as fabulous, the new cast members were more diverse, and the dialogue just as witty. If you watched SATC when you were younger and are now 50+ you’ll like this new series too.

The good news is that a second season of And Just Like That… is in production and is due out on HBO Max in March 2023. Can’t wait! Meantime, if you’re a SATC fan like me you should also follow them on Instagram @justlikethatmax and @andjustlikethatcostumes for all the fashions!

To enter the giveaway, complete the rafflecopter below or leave a comment (on my blog or social media) and LMK your favorite SATC character. Mine was always Carrie and still is. As a writer she has a way with words that hit the heart and soul.

For those who want to purchase a copy, the DVD set of 10 episodes is priced at $24.98 and is also available to own on Digital via purchase from all major digital retailers and is streaming on HBO Max.