“The 100 Foot Journey” – An Endearing Movie For Turbulent Times

While I was out on the west coast last month, I had a chance to attend a screening for the new movie, The 100 Foot Journey, which is especially endearing for these turbulent times. It tells the story of a clash between two cultures – French and Indian. Fortunately, the story has a peaceful ending, unlike cultural clashes in many parts of the world these days.

Food Unites Us All 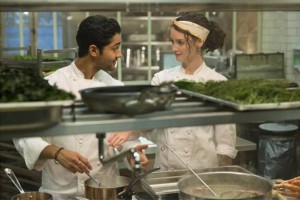 As noted in the press materials along with some commentary from moi, “the movie is about Hassan Kadam, a culinary ingénue (played by the adorable Manish Dayal), and his family who are displaced from their native India. The Kadam family, led by Papa (starring Om Puri, a truly lovable character), settles in Saint-Antonin-Noble-Val in the south of France, and opens an Indian restaurant, Maison Mumbai. That is, until the chilly chef proprietress of Le Saule Pleureur, a Michelin-starred, classical French restaurant run by Madame Mallory (the superb dame Helen Mirren – who was producers Steven Spielberg’s and Oprah Winfrey’s top pick for the role) gets wind of it.” 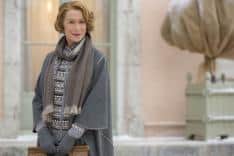 “Madam Mallory’s protests against the new Indian restaurant a hundred feet from her own escalate into a battle between the two establishments until Hassan’s passion for French haute cuisine — and for Madame Mallory’s sous chef, Marguerite (played by the cute actress Charlotte Le Bon, who looks like a young, slightly prettier Winona Ryder, and who makes a perfect mate for Hassan) — combine with his mysteriously-delicious talent to weave magic between their two cultures and imbue Saint-Antonin with the flavors of life that even Madame Mallory cannot ignore. At first Madame Mallory’s culinary rival, she eventually recognizes Hassan’s talents and takes him under her wings.”

Two Thumbs Up
I won’t tell you the rest of the story or it would spoil the fun. You’ll just have to go see The 100 Foot Journey when it opens in theaters on Friday, August 8th.

Having spent some time in the south of France a year ago, I thought the movie nicely captures the spirit and culinary pleasures of the area. Francophiles and foodies will be pleased with the production.  “Pardon, pardon, s’il vous plaît me ramener à la Provence,” I wanted to cry out as I left the theatre in a very upbeat mood from the magnificent scenery, stimulating gastronomy, and heart-warming characters.

I also had a hankering for Indian and French food and was glad to see that the press materials included recipes inspired from both restaurants. Think I will prepare the Chicken Tikka and Haricots Verts with Walnuts, Goat Cheese and Cranberry Vinaigrette this weekend. Want to join me?  The recipes are below and you can find more on the movie’s Pinterest page. 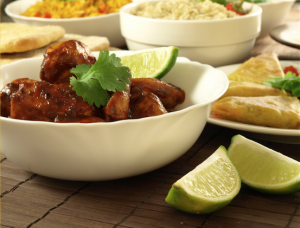 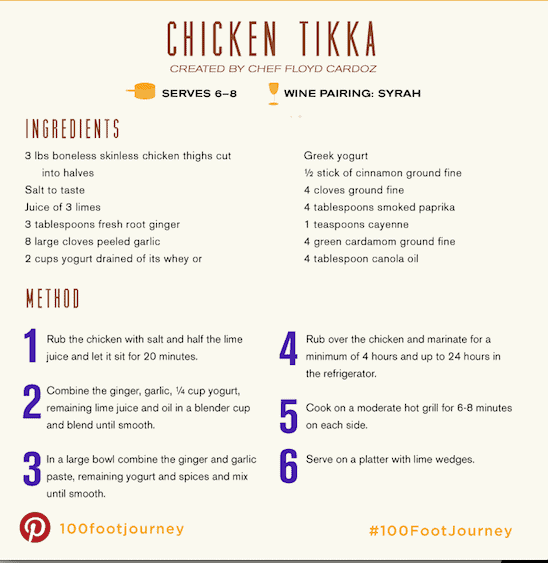 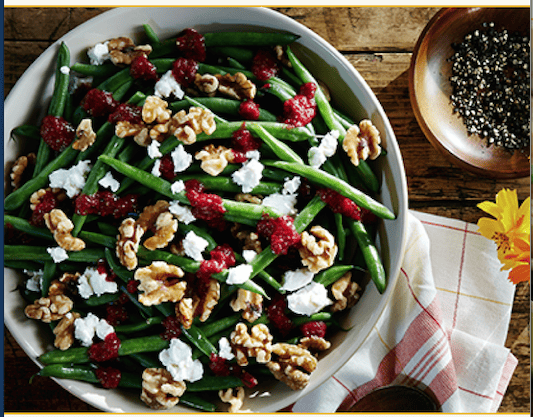 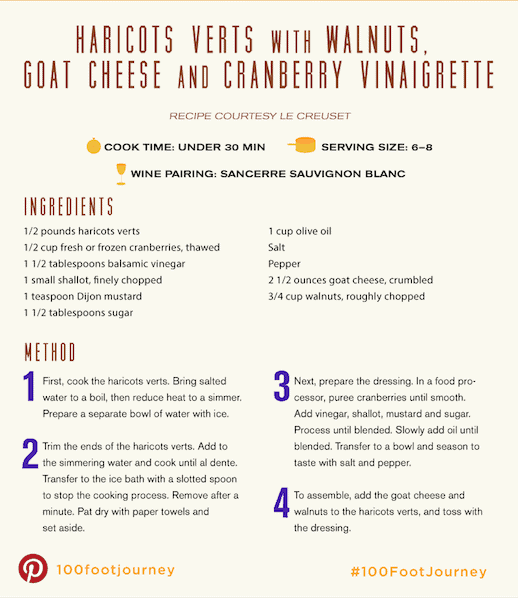 Be sure to enter the giveaway to win a copy of the original novel, The 100 Foot Journey by Richard C. Morais. Enter below.