The Power Of Possibilities at the 2013 Pennsylvania Conference For Women

The theme of this year’s Pennsylvania Conference for Women was “The Power of Possibilities.” It was a sold-out crowd of 7000 women. There were many prestigious women on the agenda who I have admired throughout my professional career including Sallie Krawcheck, one of the most respected voices on Wall Street and business leader, 85 Broads, Judge Glenda Hatchett, host of “Judge Hatchett, Madeleine Albright, former Secretary of State under President Clinton, and Hillary Clinton, another former Secretary of State and our former First Lady. (All I might add are mid-life women or older.) 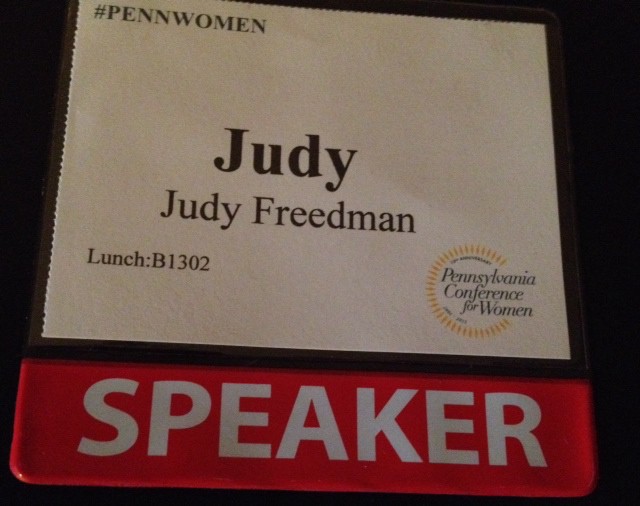 Ooh, ah, ooh, ah! There were other speakers on the agenda and one of them was me, me, me.  Wow-o-wow, it was exhilarating to be featured in the same program as those mentioned above.

“I recognize you from your picture in the brochure,” said an attendee sitting at my table during breakfast. (It was my 15 minutes of fame.) “You are leading a roundtable on social media this afternoon.” “Yes, I am,” I said as I beamed with joy. (The thought that an attendee was excited to attend my session gave me an adrenaline rush. Truly the power of possibilities.) I led three roundtables in a row, sharing my social media 101 knowledge with more than 50 mid-life women. By the last session, I had no voice left. Feeling humbled and happy from my rousing roundtable success, I went home and treated myself to a bowl of matzoh ball soup from the local deli.

There were many lessons to be learned from the keynotes. However this year, no longer climbing the corporate ladder (since I retired from my full-time job in April), I was more interested in learning how to pursue my passions during my life after 50. 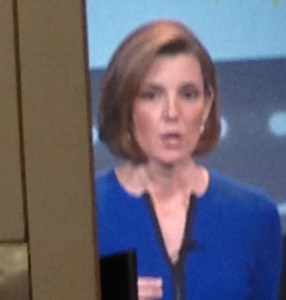 Sallie Krawcheck is the leader of 85 Broads, a global organization that supports women.

1. “If it comes down to your ethics versus your job, you can always find another job,” Sallie said. “How do you know? I know by my stomach. I ask the person I want to be, what she would do?” (I wonder if Sallie has IBS like me. I wonder if climbing the corporate ladder for 30 years contributed to my IBS.)

2.  “Get a sponsor,” Sallie said. “A sponsor matters. If you are leaning in, a sponsor has your back.” (I agree. I remember those who had my back and those who I thought had my back and sometimes didn’t have my back. Now that I am a blogger and communications consultant, I hold my own back up. That’s why I practice yoga – it helps me keep my back up nice and tall.)

3. “Your network matters,” Sallie said. “Networking is the #1 contributor to your success. Plant lots of little seeds.” (I agree. I am a BIG networker. In fact, I didn’t listen clearly to what Sallie had to say during her fourth point so as a good networker, I went up to her afterwards and asked and she said…)

4. “Companies that succeed embrace diversity,” Sallie said. (I agree. Madeleine and Hillary agreed too. During Madeleine’s and Hillary’s addresses they echoed that “when women win, everyone wins, including the family, the company and the country.” Go Sallie. Go Madeleine. Go Hillary! I hope Hillary runs for President in 2016.)

5. How does Sallie do it day in and day out? “You fall down and get back up,” said Sallie. She was fired twice during her career. She also talked about the power of gratitude, about being grateful for her family and education and the opportunities it bestowed. “However, when you are going through adversity three cups of wine are also good,” Sallie said. (I knew there was a reason I liked Sallie. I agree – wine is good and practicing gratitude is even better.) 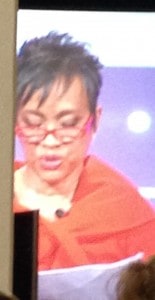 Judge Hatchett taught us to conquer our fears.

“There is no such thing as fear. You are just warming up for success,” she said. She gave us a homework assignment. She told us to “ask yourself three questions.”

1. “What is it that I’ve always wanted to do that I’ve never done?”

Okay, okay, okay. I promise I am going to write my memoir during my life after 50. I don’t want to regret not having done it. I am going to have to ask myself these three questions! 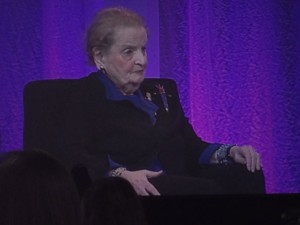 Madeleine Albright said “one person can make a difference.”

Madeleine told us that she believes in the role of the individual. “One person can make a difference,” she said. She was often the only woman in the room during her career. Her advice: “In a meeting, you don’t say it. You think it is stupid. Then a man says it. Everyone listens. You want to kick yourself because  you didn’t say it. Next time, say it.” Madeleine also practices active listening. She said it is okay to interrupt during a meeting. “Know what you are talking about. Interrupt. But know what you are going to say,” said Madeleine. 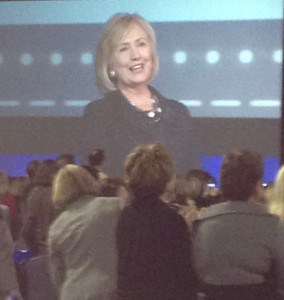 Hillary’s focus was on breaking the glass ceiling for women around the world. She said that while women have achieved a lot that there is still much to do to “help women around all the world achieve their full potential.” She said there have been gains but there are still gaps. Hillary announced she is launching an initiative called “No Ceilings: The Full Participation Project” through the Bill, Hillary & Chelsea Clinton Foundation to empower women and girls worldwide. “It’s time for us to not only look at how far we’ve come but how much more still needs to be done to elevate women and girls,” Hillary said.

The Conference also honored Linda Cliatt-Wayman, principal of Philadelphia’s Strawberry Mansion High School, whose success at reforming one of the most dangerous schools in the country was featured by ABC News. While Linda was a newbie speaker, her story and contributions to help children reach their “power of possibilities” was incredibly moving.

“You have the power, voice, the ability to make the world a better place by investing in the education of all children,” said Linda. “Touch and reach children who have lost hope.” Linda told us that at the end of each day at Philadelphia’s Strawberry Mansion High School, she gets on the loudspeaker and tells the children that “if nobody told you they loved you today, I love you.”

How powerful is that sentence?