On The Road To Reinvention – First Stop Atlanta, Next Dallas

I’m back from my travels the past few weeks and ready for a catch up. I took my new wardrobe and packed up several matching outfits – neat and tidy in my Samsonite 21-inch suitcase – and went on the road. I was in Atlanta to attend the Type A Parenting Blogger Conference. Then I went to Dallas to give a presentation at their PRSA (Public Relations Society of America) 2013 Communications Summit.

It was a fun time visiting these two cities. I enjoyed learning from the diverse people I met. I liked listening to the different speakers – many told stories about their life changes. I was also excited to share my own story about my life after 50 with a new audience.

The Type A Parenting Conference

I was a first-timer at Type A and I rocked and rolled with the 500 other bloggers in attendance. In addition to multiple sessions on techniques and tools for blogging, there were several keynotes.

– Entrepreneur Amber Naslund spoke about “The Other Side of Courage.” She talked about how she quit her job when she wasn’t happy and how she ended up with another job that was better. She said that “sometimes you have to grab things by the horns and let them take you where they are going to take you.”

She talked about following your fears. “When something scares the pants off of you – it’s time to pursue it. The only irreversible thing is death,” said Amber. (Wish I had heeded Amber’s advice earlier in my life. From now on, even if I am afraid, I’m going to do it anyway. As Amber says, “regret is a much heavier burden than failure.”) 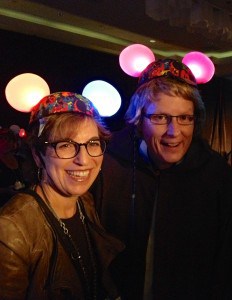 Gary Buchanan and I sported Mickey Mouse ears at the Disney party.

– Another popular speaker was Disney Parks Social Media Manager Gary Buchanan. Gary spoke about creativity. He shared inspiring quotes from the late Walt Disney: “If you’re coasting, it means you are going downhill,”  and “Curiosity keeps leading us down new paths.” Gary told us that “thinking better is not always thinking bigger.”

He demonstrated the meaning of imagination with a movie clip from Toy Story. “Imagination is the difference between what Buzz called ‘laser’ and Woody said was just a ‘little light’ that blinks.” He encouraged us to treat our creativity like Mary Poppins would “with a piecrust promise – easily made, easily broken.” “Turn ha, ha moments into ah, ha moments,” said Gary. (Ooh, ooh, ooh – I hear you Gary. I definitely want to play more during my life after 50. I will listen to your wise advice and when times get tough I will “keep calm and spin on.”) 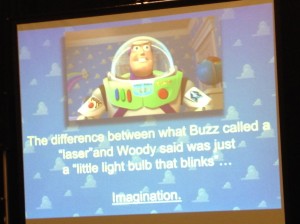 – The closing keynote came from Erika Napoletano, author of the new book “Unpopular.” “How many of you have it all figured out?” asked Erika. She told us about her two failed marriages. She told us about how she finally fell in love with the right guy Jason and about how Jason died soon after she met him. 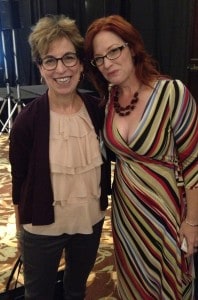 Erika said that after Jason died she realized that she had spent the past 38 years living for someone else’s ‘shoulds.’ “How many of you have blamed yourself for someone else’s wrongs?” she asked  “Be brave and be bold, ” Erika said. “And make a promise to never turn down your ambition because someone else is uncomfortable with the volume.”

I left Atlanta and headed to Dallas the following week, ready to “turn up the volume” on my own life story as a presenter at the PRSA Communications Summit.

The event kicked off with a rousing morning keynote about “The Evolution of Public Relations: From the JFK Assassination to the Rebranding of Dallas,” Since this year is the 50th anniversary of the assassination of President Kennedy, speakers included:

– Hugh Aynesworth, the only journalist to have witnessed the assassination of the President, the arrest of the assassin, and the shooting of Lee Harvey Oswald;

– Julian Read, press aide for then-Texas Governor John Connally, who was also shot on that fateful day; and

Julian shared highlights from his new book, “JFK’s Final Hours in Texas: An Eye Witness Remembers the Tragedy and Its Aftermath.” (Do you know that Jackie Kennedy Onassis was only in her 30s when she became a widow? I bought a copy of Julian’s book and read it from cover to cover during my three hour plane ride back to Philadelphia. It’s so interesting.) 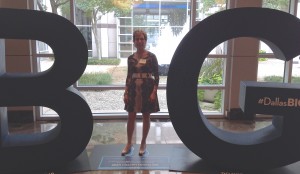 Judi put the “i” in BIG in Dallas.

After lunch, It was time to present my transformation journey about my life after 50 and tell the details of my move from a corporate career to a second act in the blogosphere.

I was cool and confident. I stepped to the podium in my new BCBG dress. My jewelry was bling  – mini silver hoop earrings and a shiny bracelet. I was clear-eyed too, thanks to my perfectly positioned Parisian tortoise-shell progressives and Bobbi Brown makeup. Check, check, check. (Ah yes, SPANX were in place too.)

I told the story of my first blog during my countdown to 50 and about how I became a widow at the end of my 49th year.  I recounted how my spirits changed from grief to gratitude with the help of yoga and mindfulness meditation. I highlighted quotes that my yoga teacher had shared with our class. Each a reminder to stop, breathe and be.

“Life is a delicate balancing act of holding on and letting go.”

The second by the late civil rights leader and philosopher Dr. Howard Thurman:

“There is something in every one of you that waits and listens for the sound of the genuine in yourself. It is the only true guide you will ever have. And if you cannot hear it, you will all of your life spend your days on the ends of strings that somebody else pulls.”

I closed my presentation by wishing each member in the audience a lifetime of fulfilling careers and reminded them as I will remind each of you, if you ever get stuck deciding what career path to choose or what to do when you’re in a difficult situation, remember what JudiBoomergirl says:

“Keep your chin up, so your neck stays forever wrinkle-free.”