My Viking Journey: Sightseeing In The Beautiful City Of Haifa 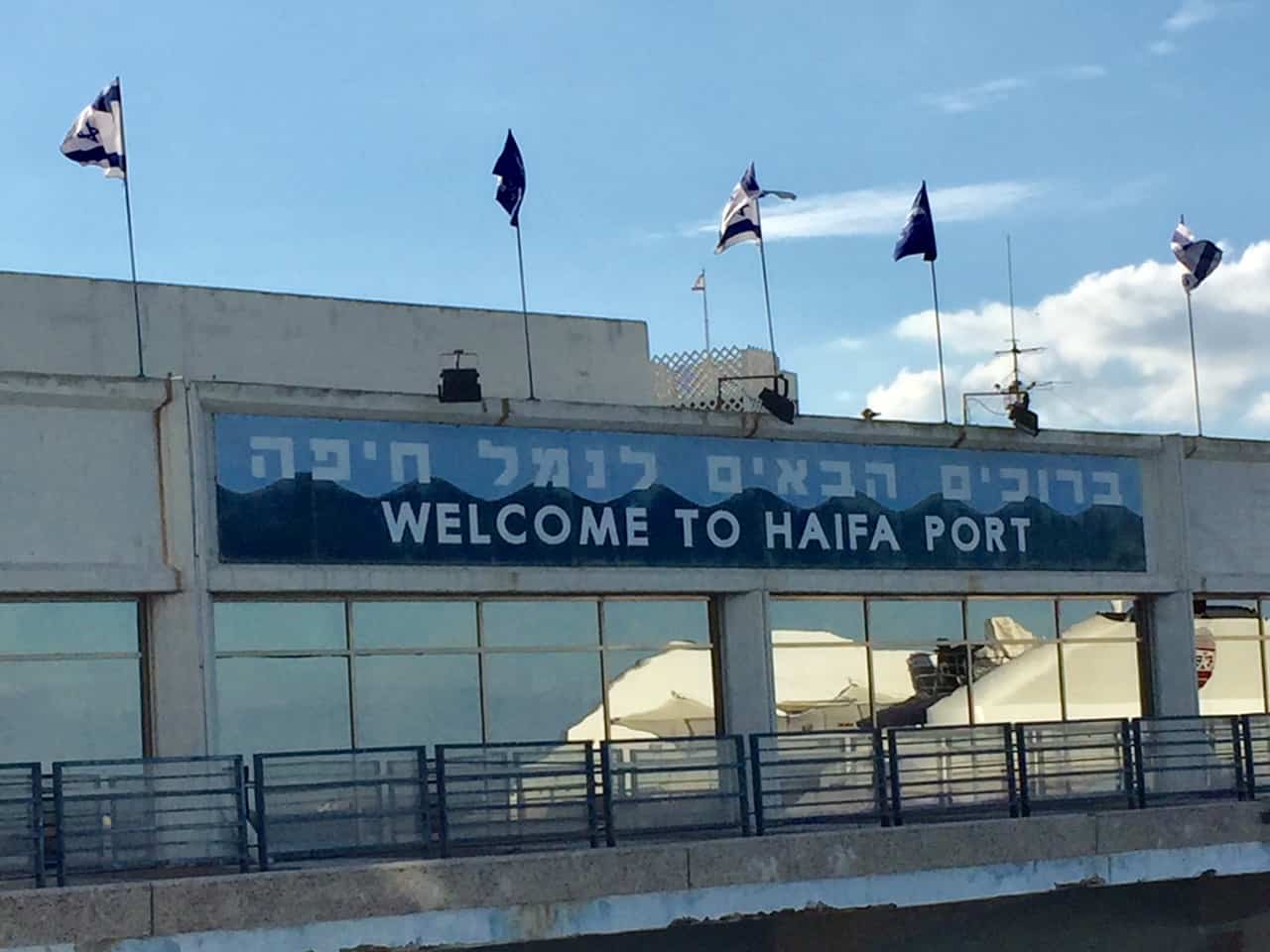 The snow may be piled up from our fourth nor’easter, but I’m going to take myself back to the beautiful city of Haifa. Come join me for a sightseeing tour of some of Israel’s spectacular natural beauty including the Baha’i Gardens at Bahji in Acres and Rosh Hanikra National Park, the only point in Israel where the sea meets the cliff.

We’ll also make a stop at the Kibbutz Rosh Hanikra, which was part of our optional excursion during my Viking journey on the luxurious Viking Star ocean liner to the Cities of Antiquity & The Holy Land. My boyfriend L and I were traveling courtesy of Viking Cruises.* 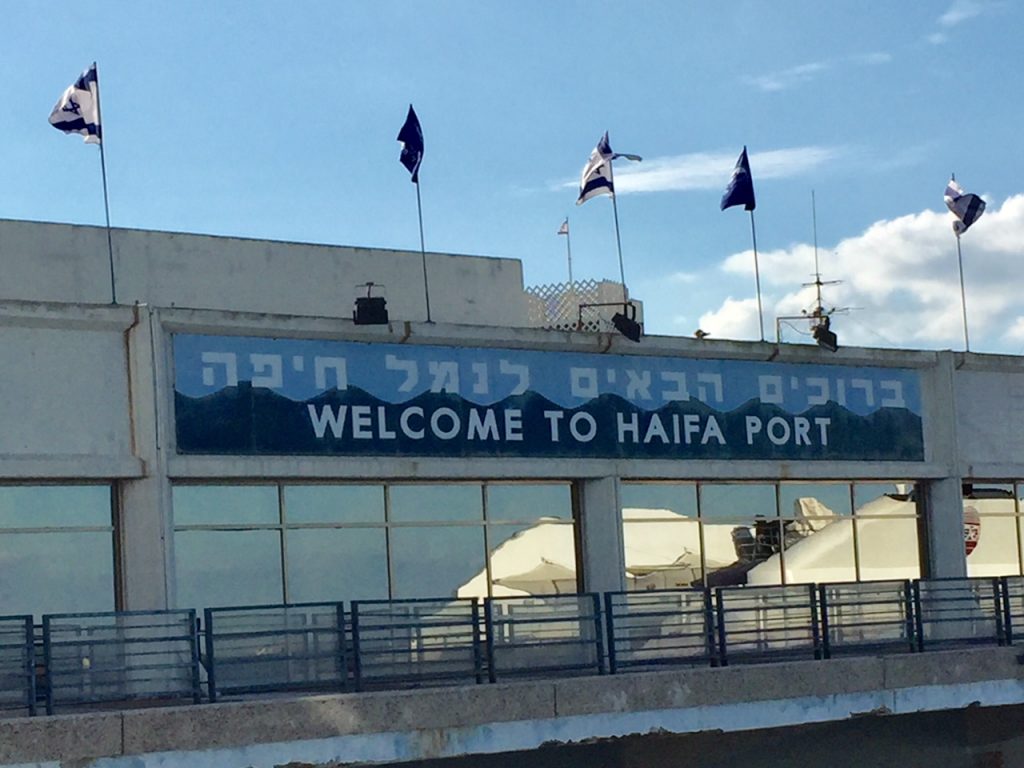 The sun was shining as we pulled into the Port of Haifa.

It was my first-ever visit to Israel and after a memorable day in Old Jerusalem, I couldn’t wait to see our next city. According to the Viking Daily, “Haifa is one of Israel’s most important and beautiful cities.” It’s stunning because it is built on the slopes of Mount Carmel and overlooking the Mediterranean Sea. 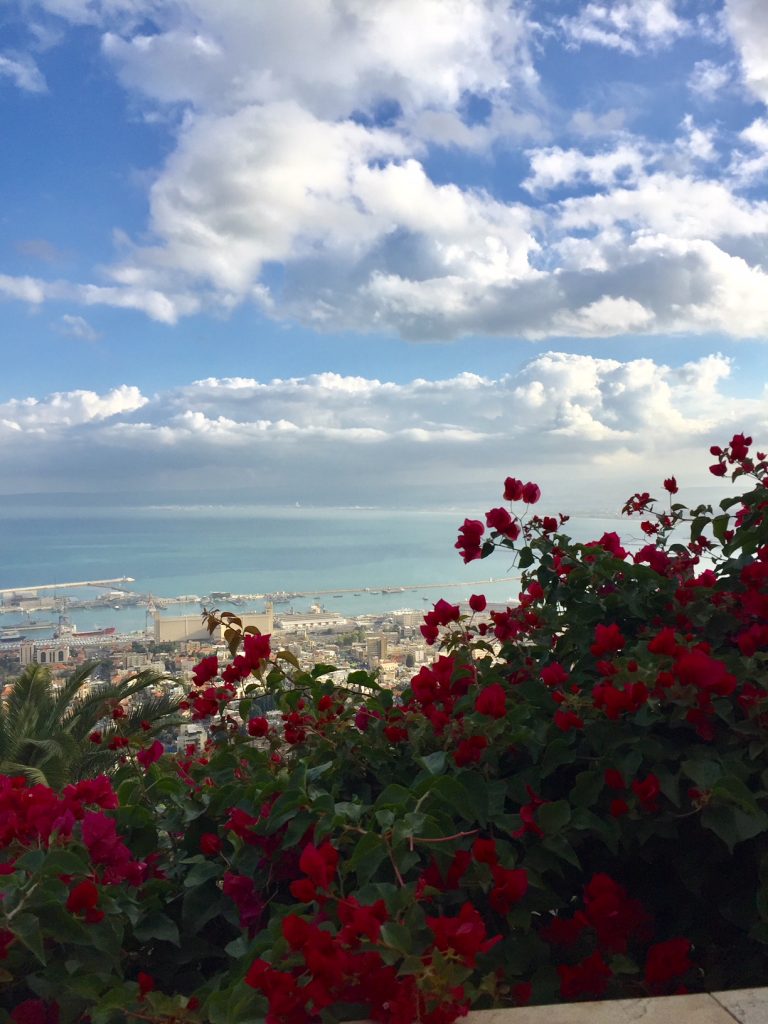 The view of Haifa from Mt. Carmel is stunning.

An Introduction to Haifa

“Good morning. Welcome to Haifa,” said our tour guide Abby. “This is an awesome tour. There’s never a dull moment.” We hopped on the bus and drove up Ben Guerion Street which is the German colony of Haifa. Supposedly World War II changed things. Many Holocaust survivors came to Haifa after the war and restored the houses around this area.\ 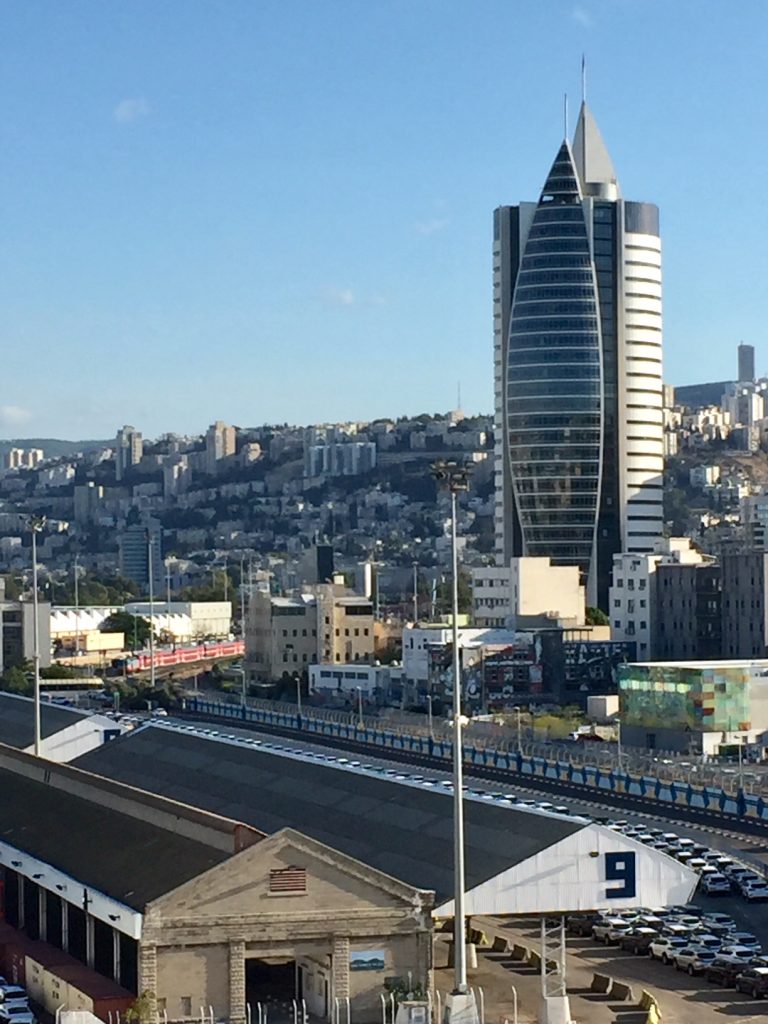 Haifa is a busy and bustling city.

“Haifa is the third largest city in Israel,” Abby said. “Haifa has a population of 230,000 people. Eighty percent are Jewish and the rest is Arab, Muslim, and Catholic. They live in harmony. It works.”

The Hanging Gardens of Haifa

Our first stop was at the top of Mt. Carmel, for a breathtaking view of the Hanging Gardens of Haifa. The Gardens are managed by the Bahà’i faith, a religion that was started in Iran many years ago. Its followers are missionaries and big believers in the equality of men and women. Haifa is the world center for the Bahà’i religion and where its founder is buried. 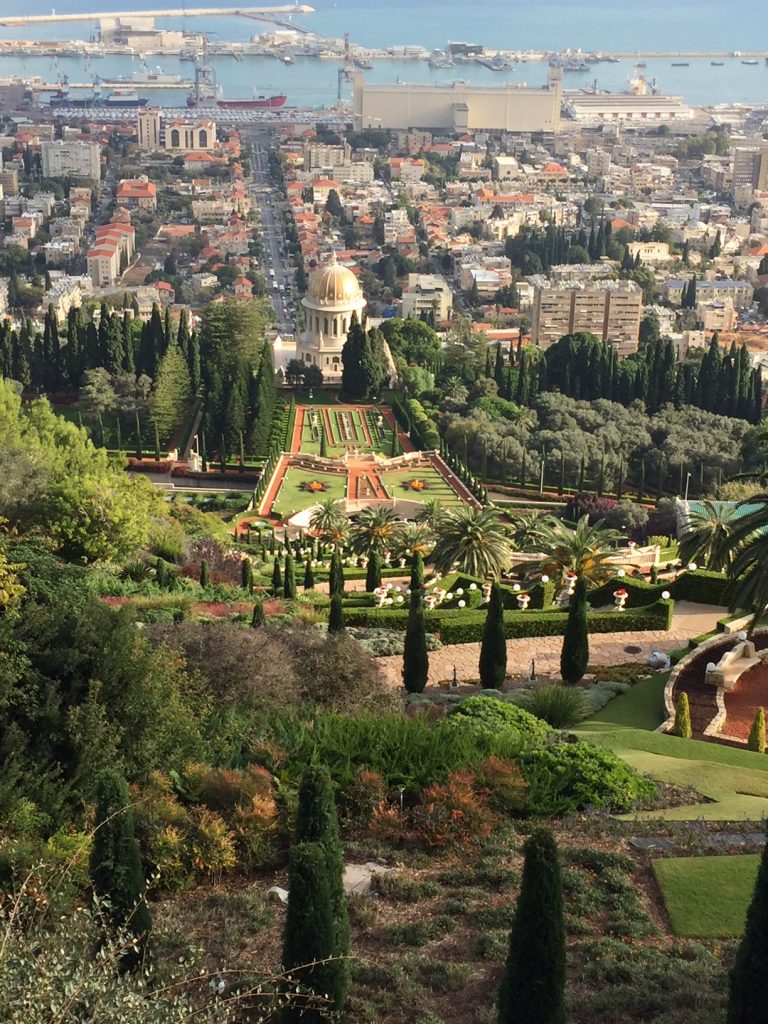 The Hanging Gardens atop Mt. Carmel are quite magnificent .

From the peak you can see the entire city. Abby pointed to the area that is home to the University of Haifa and Technion University, a famous establishment like M.I.T. in America. Technion has produced several Nobel prize winners,

On Our Way To The Kibbutz

“Before arriving at the Kibbutz Rosh Hanikra, Abby informed us that we would be stopping at the Acres Botanical Gardens, another group of gardens operated by the Bahà’i. The Shrine there is where the prophet is buried. It is a very holy place. 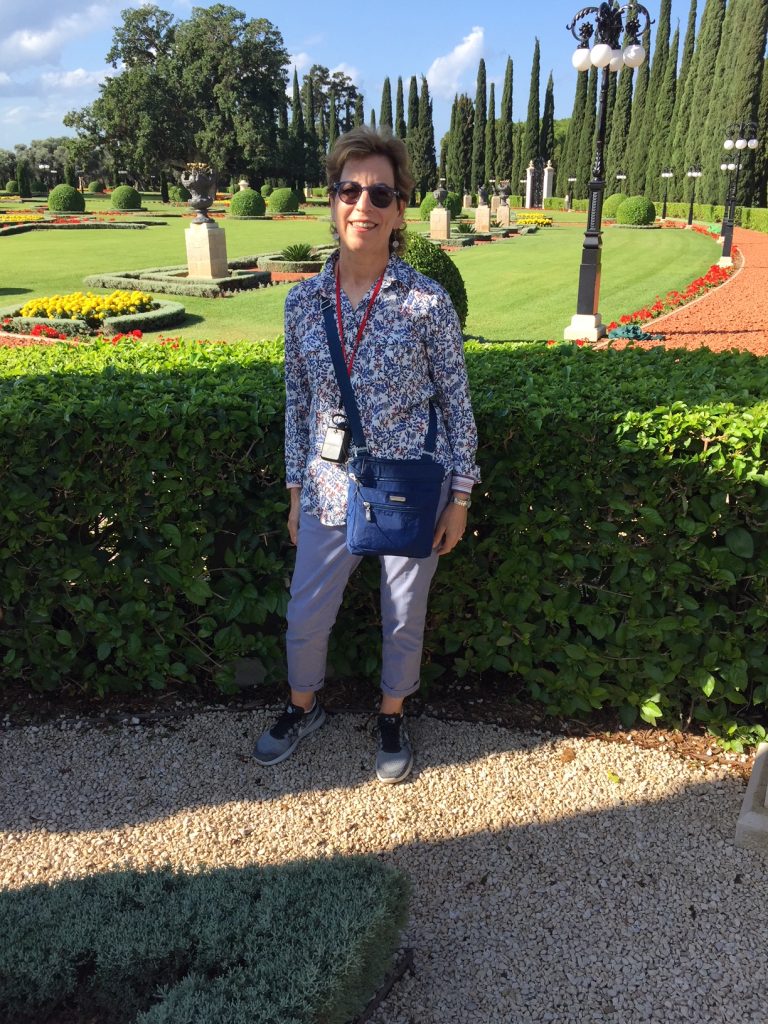 The Botanical Gardens in Acres are filled with artfully arranged flower beds.

We strolled the Gardens, admiring the elaborate flower beds. It was quiet and serene with ponds, fountains, and a special gated section surrounding the Shrine. It was a great place to close my eyes for a few minutes and meditate. 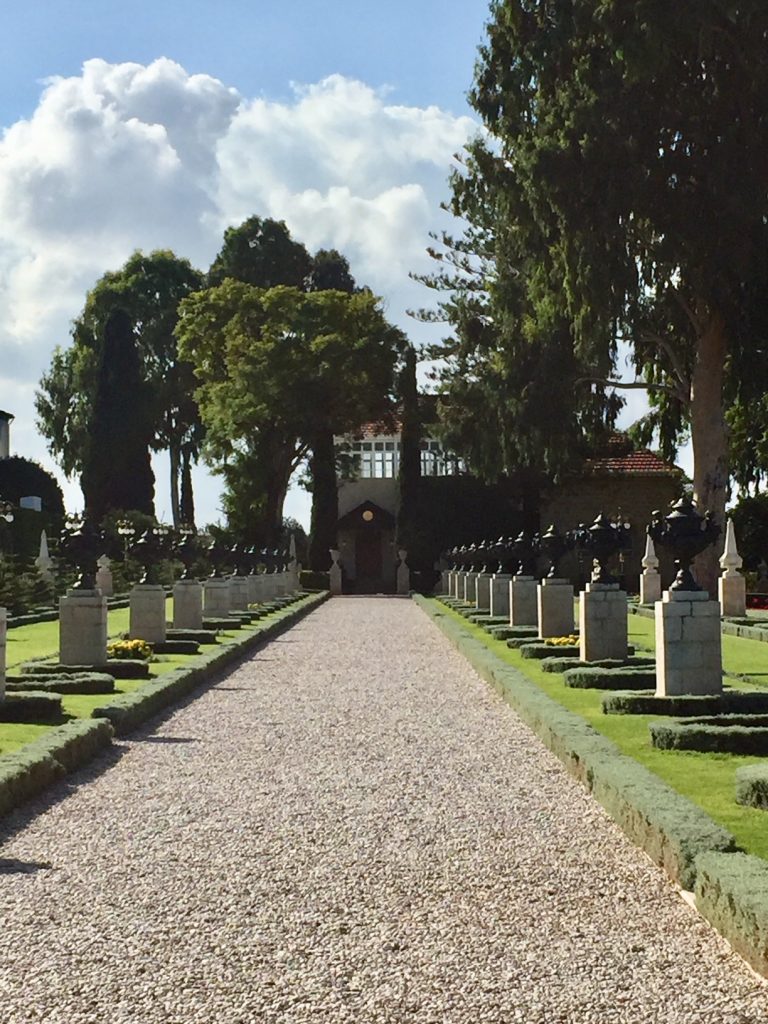 A Communal Way of Living

While we were driving to the Kibbutz Rosh Hanikra, Abby explained the philosophy behind this type of communal way of living. “Kibbutz is a form of settlement that started in 1910. The general idea is that you give as much as you can and you receive as much as you need. If you are young, you will give more and need less. As you are older, you will give less and need more. Everyone belongs to everyone. The children belong to everyone and live in the children’s home and visit their parents each day.” It was interesting to learn that though socialism is the core in a kibbutz, lately capitalism is winning out. 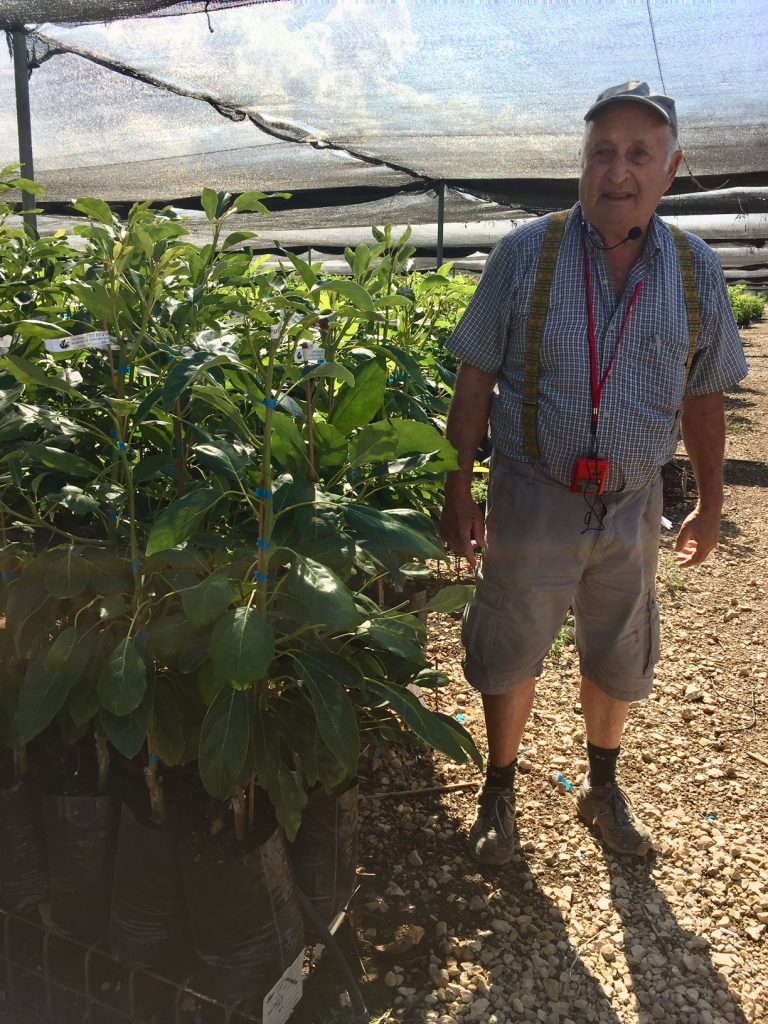 “We’re going to have an agricultural tour,” said our guide Eitan, who has been a farmer for 60 years. We climbed aboard electric golf carts to get around the the property.  Eitan told us that 1350 people live on this kibbutz, which was founded in 1949. He shared highlights of how the kibbutz operates, including the work week of Sunday to Thursday. Friday is prep for Sabbath and Saturday is the Sabbath and a day of rest. 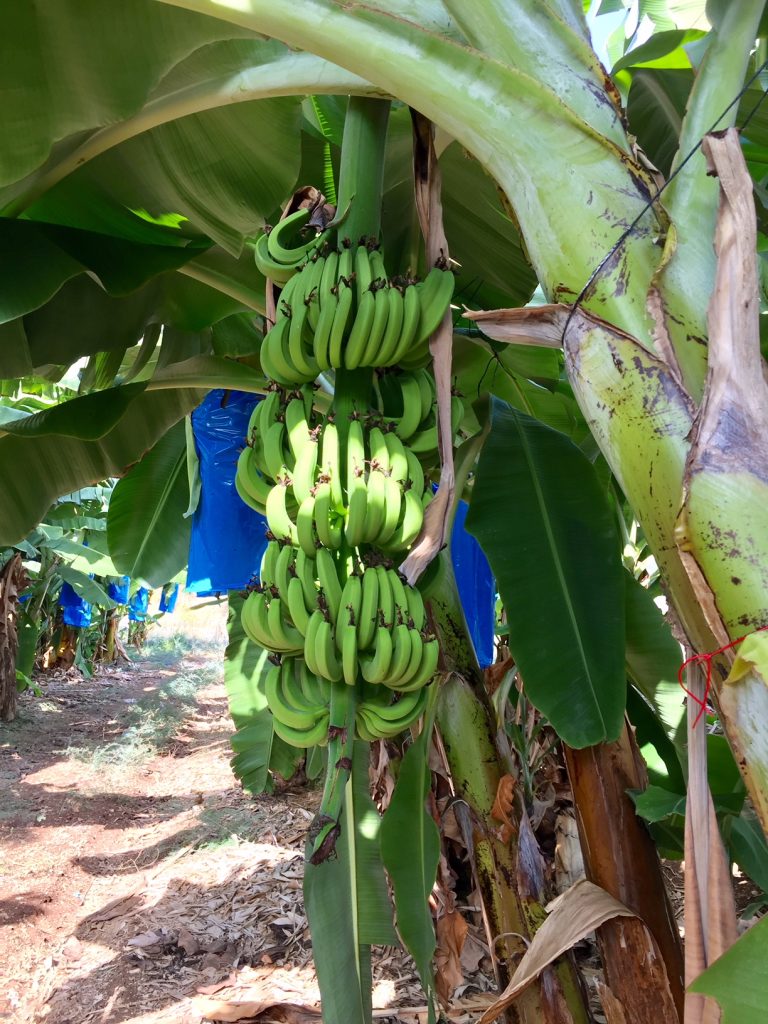 We went into the greenhouses to see how banana seedlings grow and into the labs to see how avocado seeds are grafted. Eitan told us that they sell their seedlings around the world. 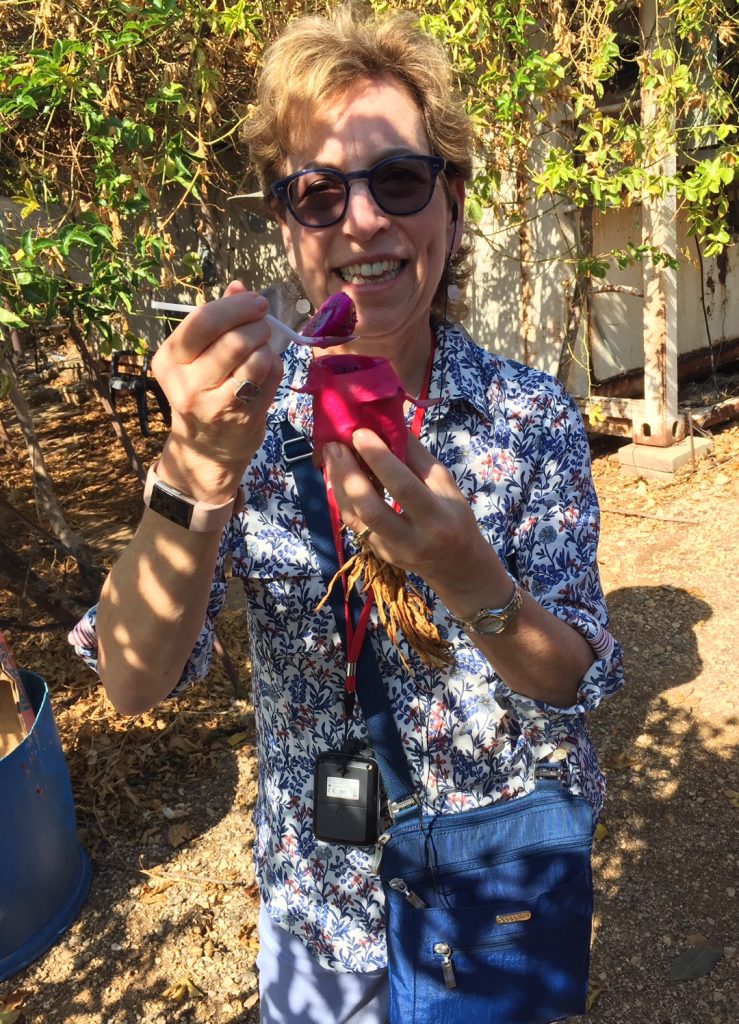 It was fun to taste the exotic fruits off the trees.

We tasted freshly picked dragon fruit and ripe bananas. We learned from Eitan that bananas are not grown on trees, their greenery is considered grass. I felt like I was in a jungle walking through bunches of hanging bananas. There were plantains as well, which are mostly used for cooking. 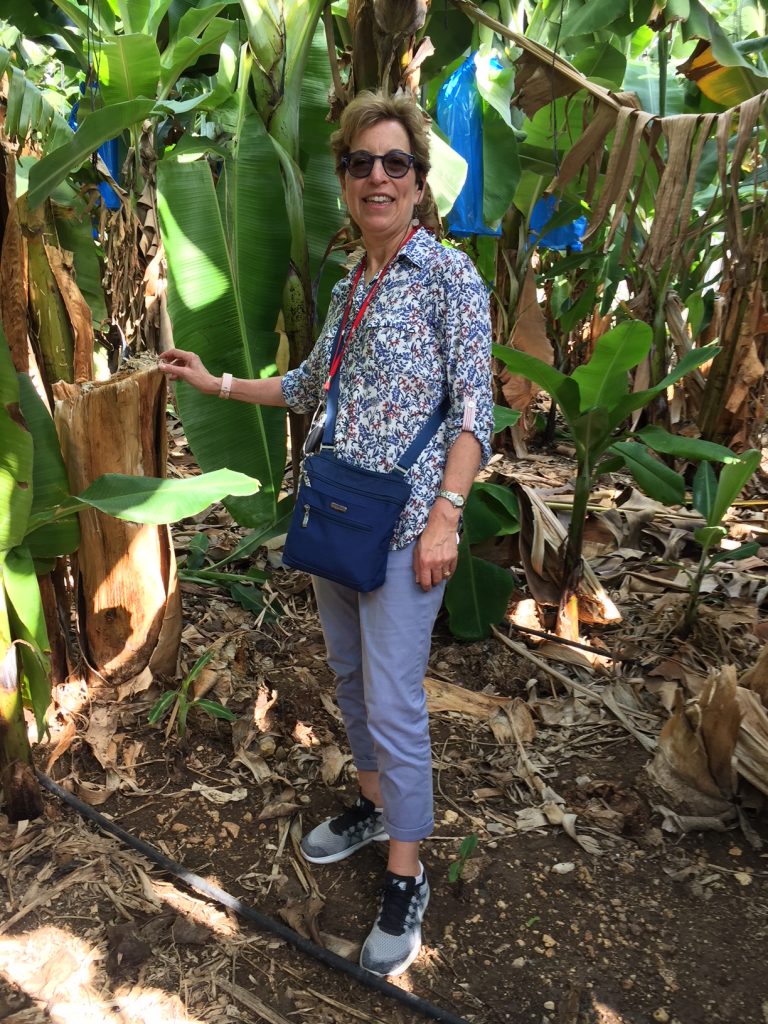 Judi in the banana jungle!

Our last stop was Rosh Hanikra National Park, a truly ah-may-zing place at the border of Israel and Lebanon. “There is always a navy ship in the harbor because it is close to the border,” Abby said. 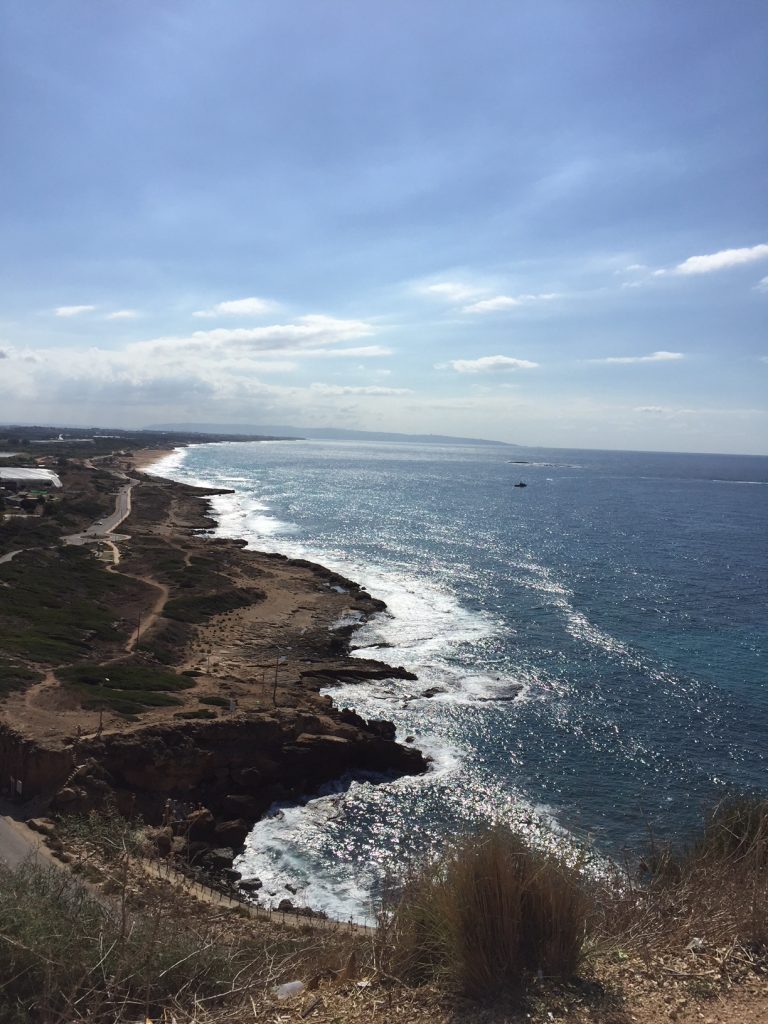 Taking in the beauty of Haifa’s coast.

We took the cable cars down to the beach to walk the rocky pathways and see the turquoise waters of chalk grottoes. The brief film about the Park was worth watching. It explained how Rosh Hanikra, which means the top of the chisel, got its name from the chiseling of the rock during the time of Alexander the Great. Supposedly, the relationship between sea and stone and calm and storm continues in Rosh Hanikra, and will continue for thousands more years. 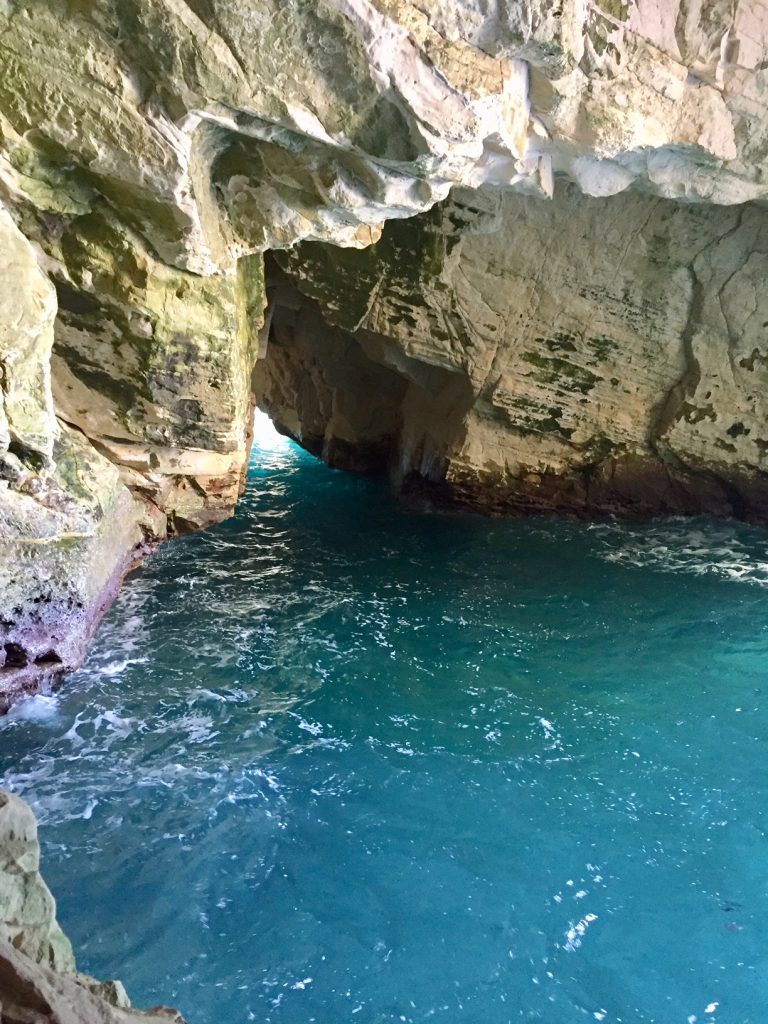 The water in the grotto was brilliant turquoise.

Our final steps were up to the border of Israel and Lebanon, where there is a restaurant and souvenir shop. It was surreal to think about where I was standing and that I felt safe. 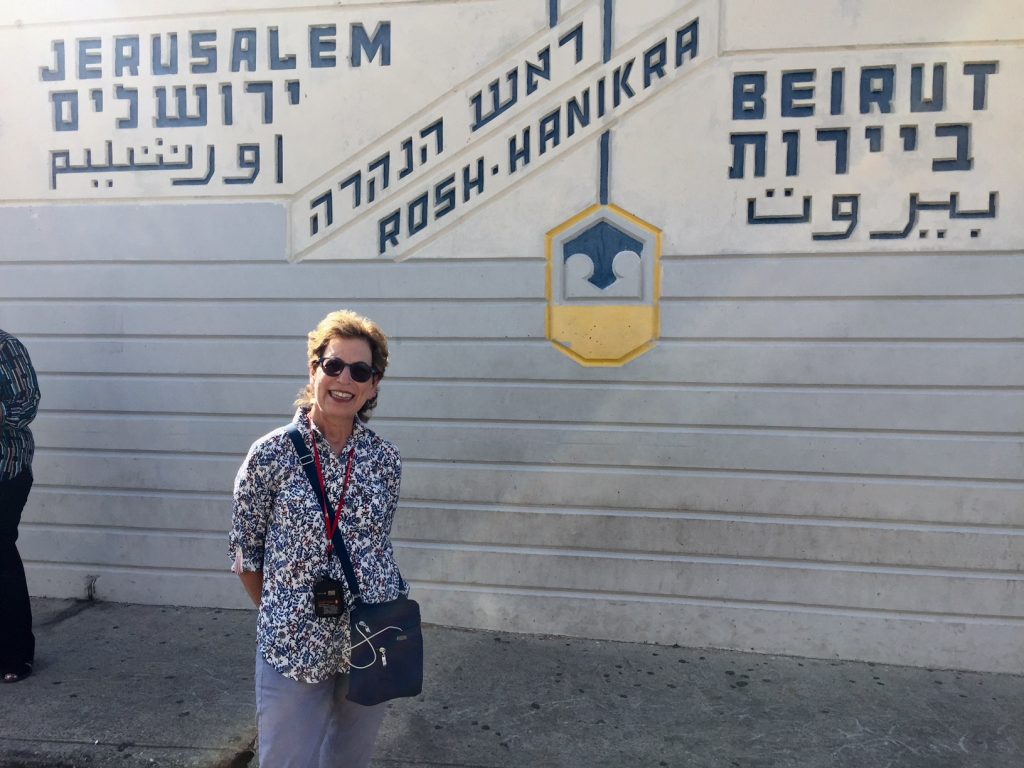 At the border of Israel and Lebanon.

Heading back to the Viking Star, I thought about Albert Einstein’s words quoted in the Rosh Hanikra film: “Look deep into nature and then you will understand everything better,” said Einstein. What a day it had been “looking deep into nature” at these Haifa landmarks — another memorable adventure on my Viking journey.