A Summer of Fun & Mindful Moments With My New Grand Puppy 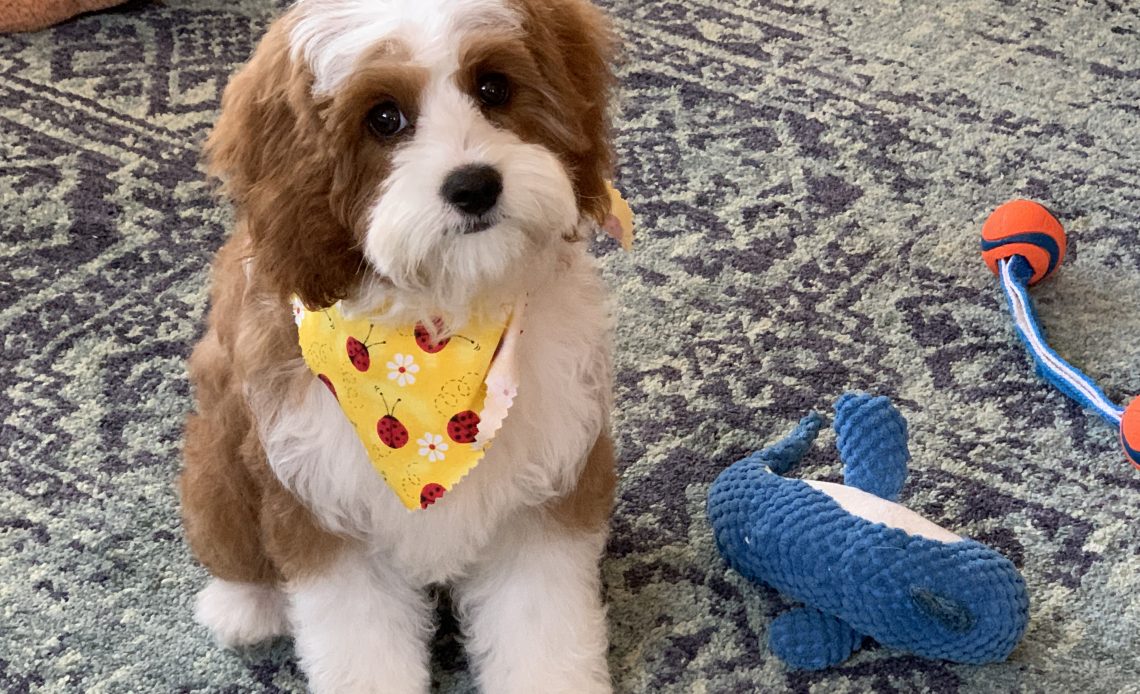 “My cavapoo is coming next week,” said my daughter A last month. A had been on the breeder’s waiting list for almost a year. “He’ll be eight weeks old. I’d like to keep O at the Jersey shore for the summer since I can work remotely. What do you say?” 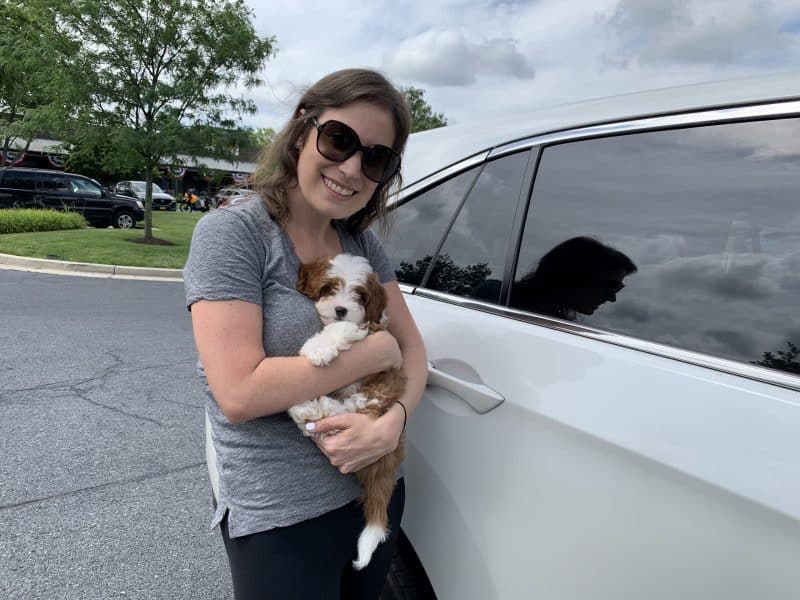 My daughter A waited a year for her cavapoo puppy

What could I say? I had planned to spend more time at my beach condo on the corner after ending my relationship with my boyfriend L. My grand puppy would keep my mind off my breakup and be a new beginning of sorts. Plus, unlike having my own dog, my grand puppy O would be just that, a grand. I could care for him, spoil him and then give him back. Seeing the first picture sealed the deal.

“OMG, he is the cutest of cute. Sounds like a great idea,” I said to A. “Let’s do it!” And so began my summer of fun and mindful moments with my new grand puppy O.

Adapting to a puppy schedule

It’s amazing how much A and I have learned about raising a puppy in six weeks since O became part of the family. We can’t do anything without discussing, “what about O?” His puppy schedule has literally taken over our lives.

The first week was the worst with sleepless nights for A. “You’ll think you made a mistake getting a dog,” said our neighbor K who has two grown cavapoos. That period will quickly fade and you won’t remember what it was like without O. He will bring you such joy.” 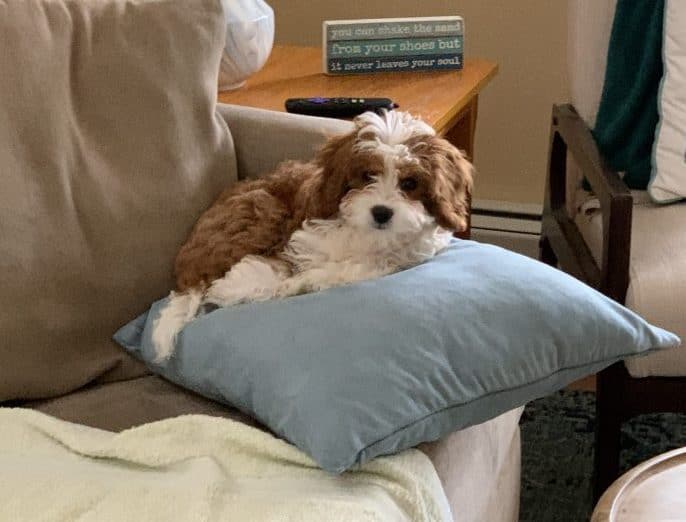 My grand puppy O quickly won over my heart

It’s easy to practice mindfulness with my grand puppy O

My mindfulness practice has helped me be a more compassionate grandma to O. There’s no way to be in the past or future when you have a puppy in the house. It’s all about the now. When I say now I mean it’s all about mindful moments. Mindful moments include pee or poo, eats and treats, play and more play (or play and bite everything), and nap and nite nite. Each one requires focus on the task at hand. 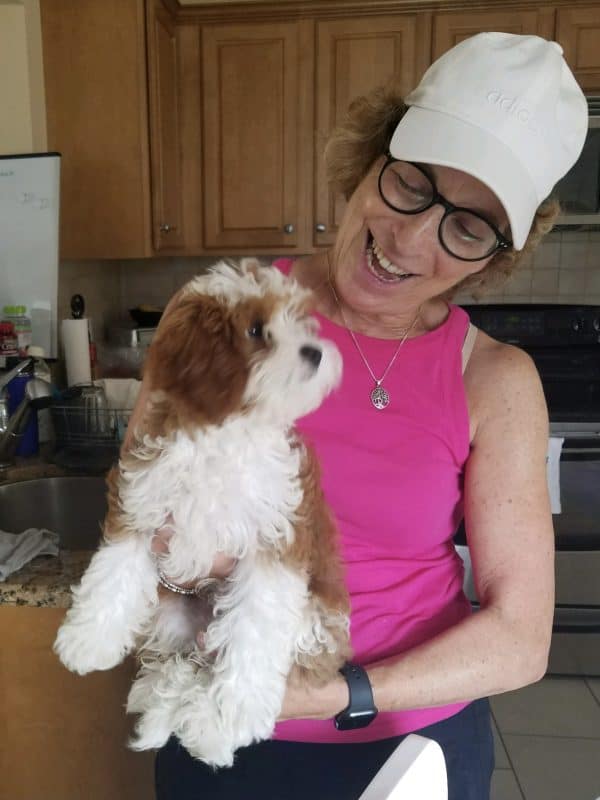 “Good potty” is part of my everyday vocabulary.

That’s what A and I say whenever O goes pee or poo outdoors and it follows with a treat from the treat bag that hangs on O’s leash. O has shown us that he prefers outdoor grass, refuses indoor pads and if we don’t pay attention to him when he wants it, without haste he will make the carpet or floor his target of choice. 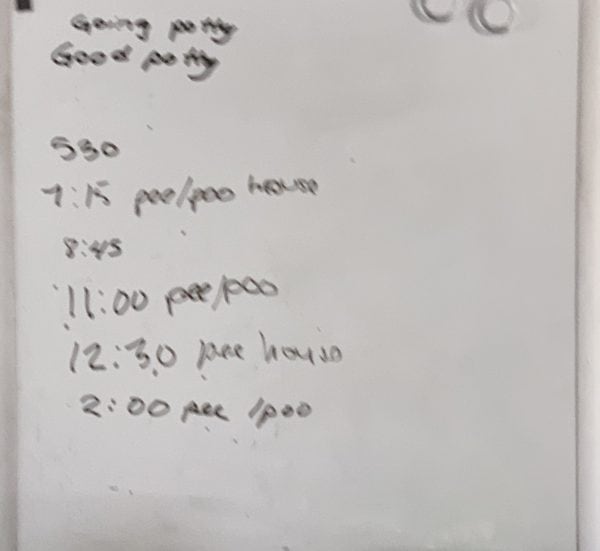 It’s no easy feat getting a puppy into a harness. O wiggles so much that by the time I get one leg inside, the other one is out. Thankfully I’ve perfected my prep skills without a bite. As for my poo scooping skills, they’re improving as well. These days I’m at the ready with bags unfolded before the first drop falls.

I’ve learned that a puppy goes potty every one to two hours. I’ll let you do the math to see why these mindful moments make up such a huge part of the day.

Do dogs eat better then humans?

“What variety of patty would you like,” said the saleswoman at the pet food store when I went to get meal enhancers since O wouldn’t eat his kibble out of the bowl.

“We have salmon, venison, lamb, rabbit, beef, chicken…” There were so many flavors I can’t remember them all. “What do you suggest,” I asked inquisitively. “The lamb is the most flavorful,” she said. OMG, of course lamb is much more flavorful than regular kibble. “I’ll take the Dandy Lamb,” I responded. Nothing but the best for my grand puppy O.

”Get some new treats too while you’re at the store,” said A. 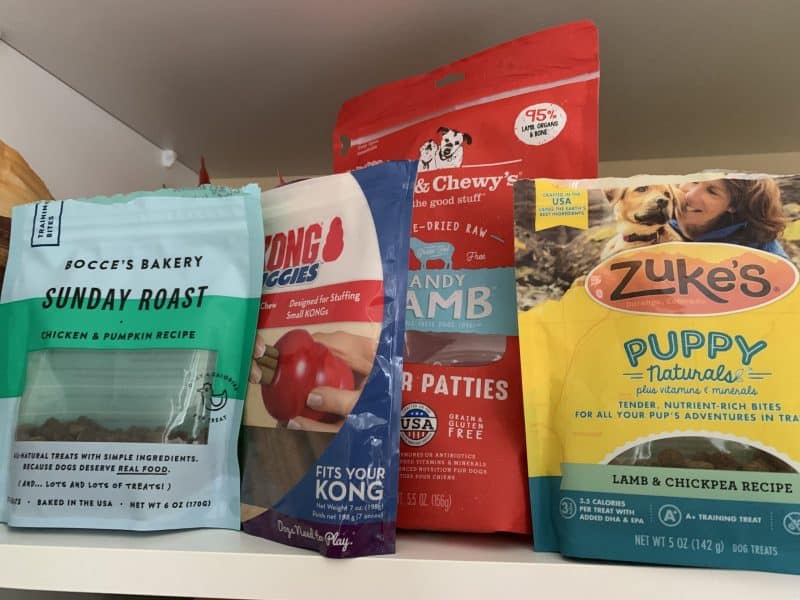 There are endless varieties of dog food and treats

“What kind of treats do you have?” I asked. “Let me show you to the aisle,” said the saleswoman. There were rows and rows of treats. Big ones and small ones. Organic and homemade. Heart-shaped and alphabet-designed. My cupboard with doggie culinary delights was ever widened with Zuke’s Puppy Naturals, Bocce’s Bakery, and Stella & Chewy’s in such tasty combinations as Sunday Roast Chicken & Pumpkin; Say Moo Beef & Cheddar and Bac’ N Nutty PB & Bacon.

A red Kong and the Ziggies stick that goes inside it also stand ready as extra special treats. O loves his Ziggies.

It’s a good thing that I’m retired and like to spend more of my waking hours having fun than working.  That’s because puppies like to play.

“I’m back again to buy more toys for my grand puppy O,” I said at the HomeGoods checkout. You have such great toys and they’re so inexpensive.” “Go ahead and spoil your grand puppy,” said the clerk. “All grandmas do.” 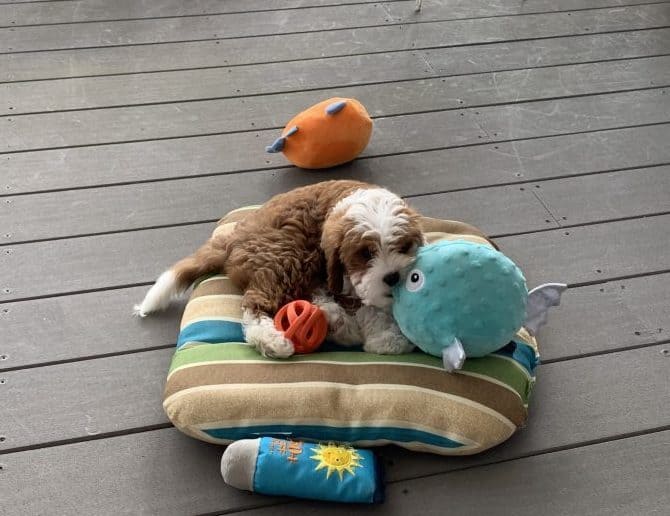 OMG, I bought such fab squeaky toys with beachy themes. O’s toys have taken over the living room. There’s a turtle, several fishes, a crab and dolphin. Plus many more rubber bones, balls and stuffed animals to chew.

Being a Type A person, naps were not on my daily schedule. Even since retiring, I very rarely napped. Not anymore. After vigorous play, O naps and I often do too. Remember when they used to say “sleep when your baby sleeps.” Well the same goes for when your puppy sleeps. Ooh, ooh, ooh, on a good afternoon O can sometimes take a two hour nap. 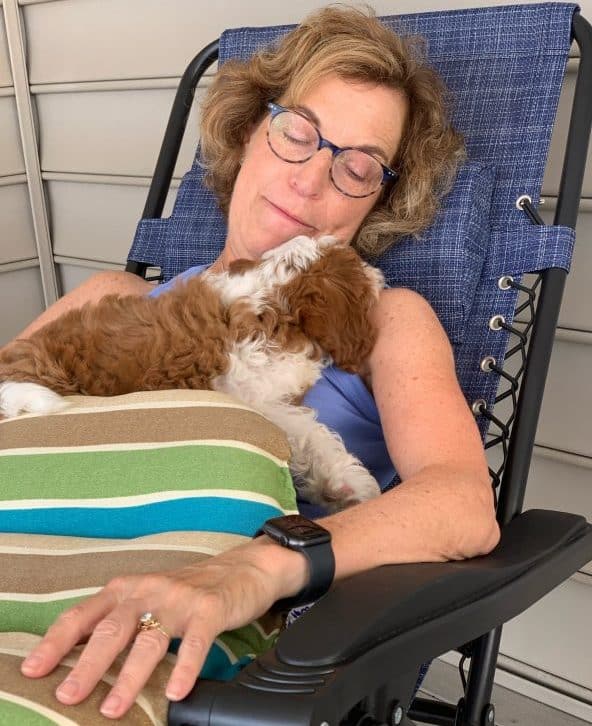 Napping with my grand puppy

He also naps after his evening zoomies. Zoomies are when a dog has excess energy and races around the house. By 8:30 p.m., O is ready to rest and retires to the couch.

“It’s nite, nite time,” A says to O after his last potty outing at 10:30 p.m. Then it’s off to la la land. “Have a good rest,” I say to O as he pitter patters into his crate. A and I head to bed minutes later. No more late nights for me.

Did I tell you that I haven’t had a sleepless night since O arrived? I think a puppy might be the best cure for post-menopausal insomnia. Or maybe it’s just I’m totally exhausted after so much play time each day. 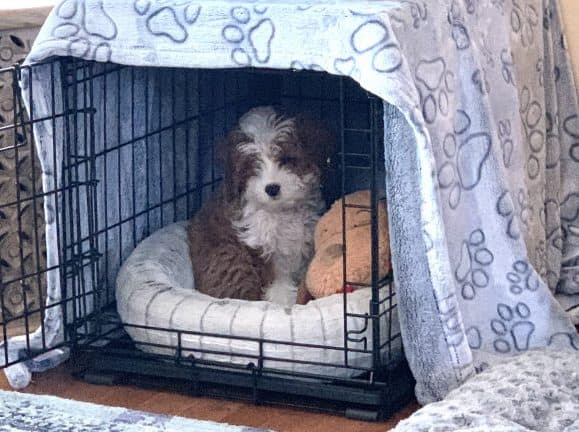 I’m going to miss A and O when they go to their permanent home in September. It’s been so much fun having them around this summer.

“Hey mom, do you think you can babysit O when I go on a short vacation in October,” asked A. My lips formed a big smile as I grinned and said, “Absolutely, any time.”

Do I love my grand puppy O? You bet!

P.S.: I’ll be taking a break the next few weeks to spend the rest of August with my daughter A and my grand puppy O. Hope you have a wonderful end to your summer. See you back after Labor Day.

P.S.S: Any tips on training a puppy? Leave a comment and LMK. I’m all ears.

basics of a puppy’s schedule being in the present with dogs best place to get a cavapoo puppy cavapoo puppies getting a new puppy having a grand puppy King Mountain Doodles mindfulness and dogs puppies and mindful moments raising a puppy what it’s like on a daily basis with my new grand puppy
Comments: 3
Share: