I’ve always adored actress Diane Keaton’s individual style from the moment I saw Annie Hall. When I was in college in the later 70s, I tried to emulate Annie. I went to the thrift store and bought a navy man-tailored vest and tie and wore the combo with a long-sleeved shirt and baggy khakis (also from the thrift store). I even copied her mannerisms with phrases like “la de da, la de da” – just like Annie would say. 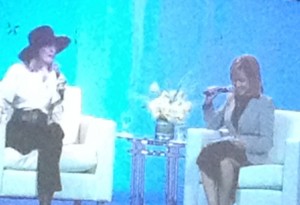 Last month, Diane was a keynote at the Pennsylvania Conference for Women in Philadelphia, PA. She looked amazing wearing her Annie-style attire. The brim of her hat was so wide you could barely see her face. At 68, she is still as bold and bubbly as ever – just like the mature female characters she has played during her post 50 career – with movies like Something’s Gotta Give, Because I Said So, And So It Goes.

She talked about the positive sides of aging. “Being over 50 humbles us. Life expands and we see the larger picture,” Diane said. (I agree. I’m definitely a more humbled person now that I am older. How about you?)

She spoke about her mentors, including Woody Allen and Francis Coppola. “In the movies during the 60s I was a woman in a world of men,” Diane said.

She shared stories about her parents. Her mom, who wrote 85 diaries, was her greatest advocate and enabler in life, and her dad, who inspired her to become a parent at the age of 50. Never married, she adopted two children – daughter Dexter and son Duke – who are now both teenagers. “My dad died at 68 from a brain tumor. He never liked his work or job. He wished he had done more of what he enjoyed,” Diane said.

Having seen her father’s unhappiness in life, she encouraged the audience to “make work play.” “Be engaged in it. Be curious about it,” Diane said. “Laughter is the best medicine. Authenticity comes first.”

When asked about having a second career, Diane replied: “I dread retirement. Don’t retire.” However she agreed that today’s baby boomers have a different attitude about retirement than their parents did. “Retirement doesn’t mean you can’t be active in what you love. Be part of your community,” Diane said.

Finally, can you guess Diane’s favorite role in a movie? Without a doubt she said, “Annie Hall. It got me here. Woody Allen wrote a fantastic part.” (It will always be my favorite too! I still laugh whenever I watch it.)

Copies of Diane’s new book, Let’s Just Say It Wasn’t Pretty, were available for purchase at the conference and I bought a signed copy. Better yet, I’m giving it away as my next giveaway!  So dear blog friends, if you want to read Diane’s perspectives on “beauty, aging, and the importance of staying true to yourself – no matter what anyone else thinks,” leave a comment on this post. Let me know which Diane Keaton movie tops your list. Be sure to also complete the Rafflecopter entry below.

P.S. I did read the book. It’s not worth a Pulitzer but Diane’s words are as whimsical as always. Plus, she shares some tidbits about all the handsome guys in her life that she never married including – Warren Beatty, Al Pacino, Jack Nicholson and of course, Woody Allen.

Note: This post includes Amazon affiliate links. If you click and purchase any of the items I receive a small renumeration. These funds help me continue to maintain my blog and bring new information to you each week.